For their first auction of 2022, Burns & Co. Auctions have 99 lots on offer and included in that total are three classic British sports cars in barn find condition. The trio, consisting of a 1956 Jaguar XK140 coupe, 1962 Jaguar E Type coupe and a 1949 MG TC roadster, are part of a deceased estate from suburban Melbourne and will be auctioned online on Sunday 6 February. 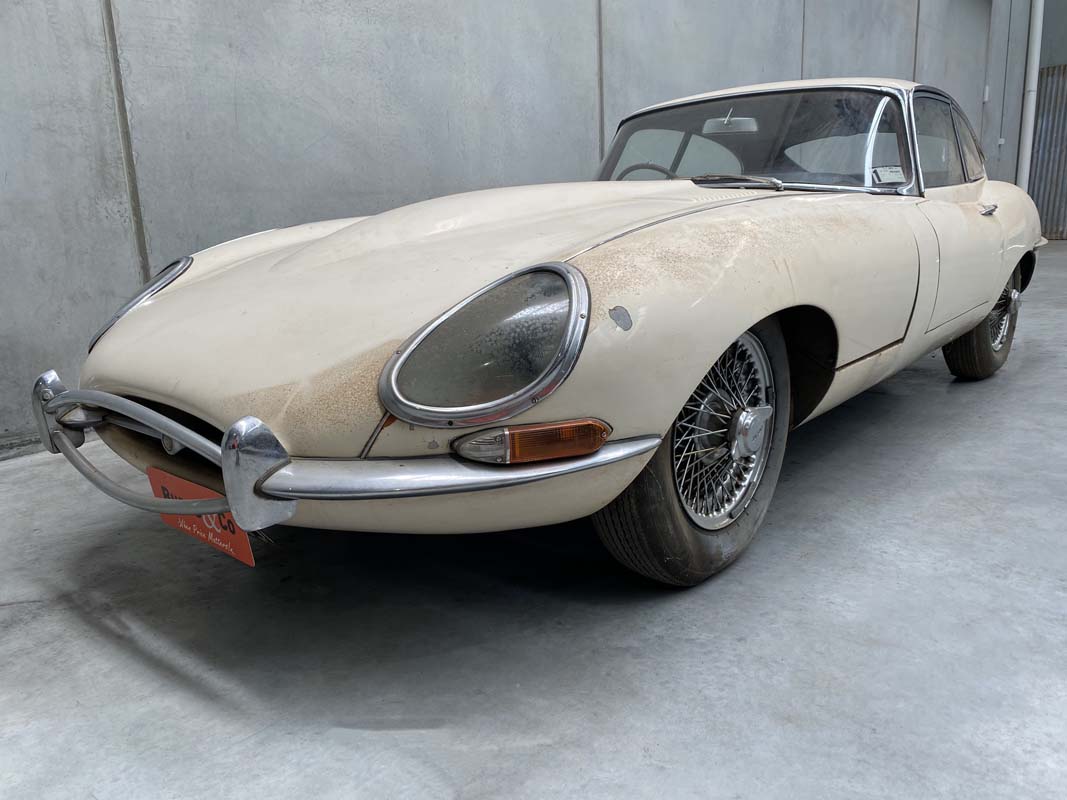 Along with these three, there are many other desirable classic cars, late model performance and luxury cars, project cars and competition cars, including the ex-Pete Geoghegan HJ Monaro Sports Sedan.

Motorcycles, number plates, collectables and memorabilia are also up for grabs, with pre-bidding open now. 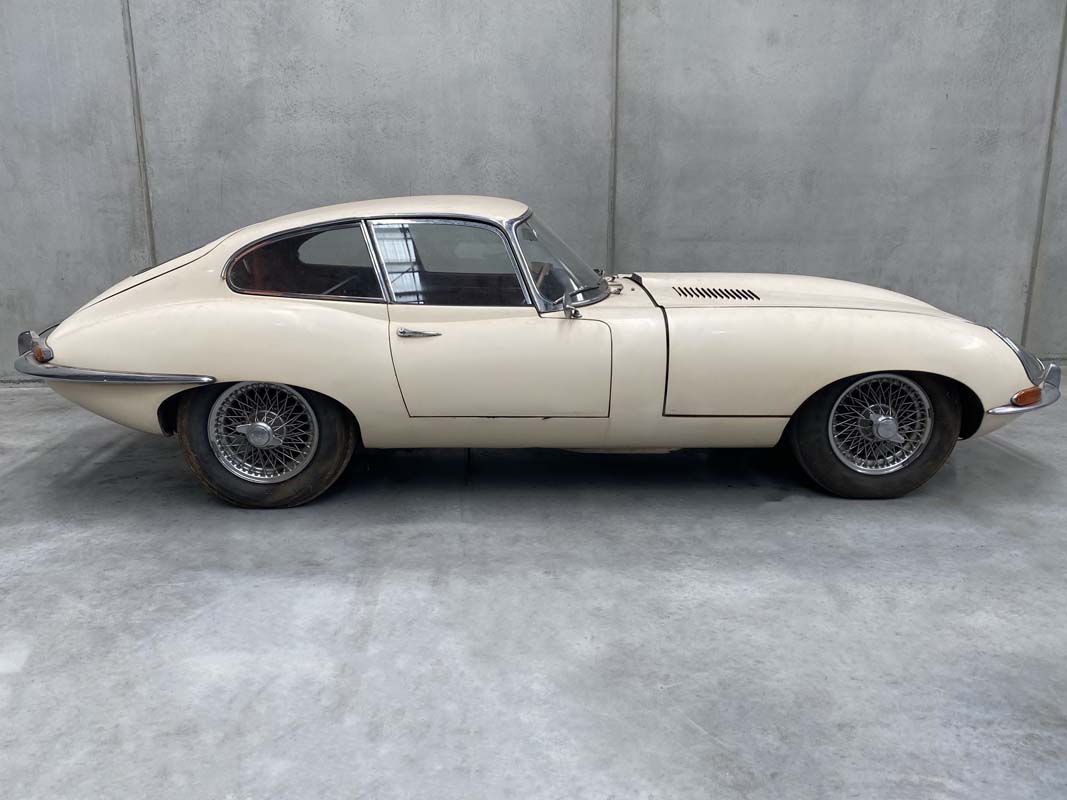 This E Type fixed-head coupe is described as being Australian-delivered and was sold new in Sydney in June, 1962. When this car came to Victoria is unknown and how long it spent hibernating in a shed in Blackburn is also unknown, but a registration sticker from 1973 suggests it could be almost fifty years. 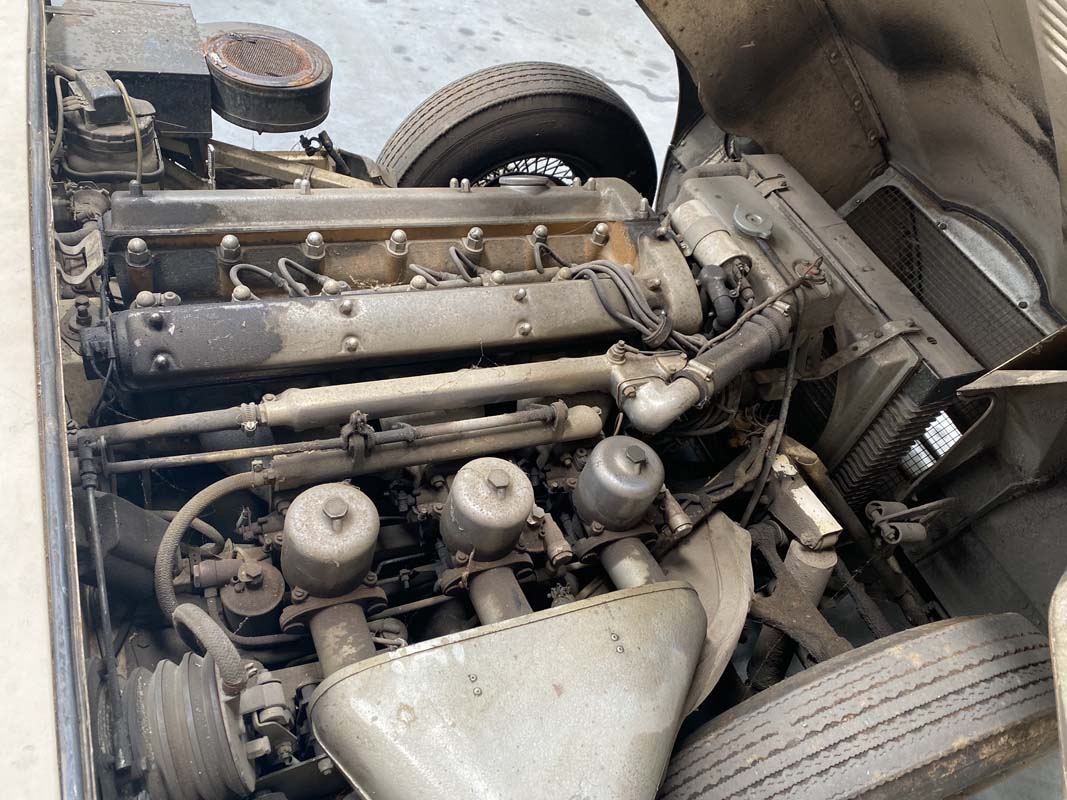 As offered, this E Type is described as an original example of a Series I fixed-head coupe, with the 3.8-litre six matched to a four-speed manual transmission. Finished in white with a red interior, authentic features include centre-lock wire wheels (including the spare), glass headlamp shields, ‘Amco’ bars front and rear, woodrim steering wheel and Smiths gauges. Air conditioning is also fitted. 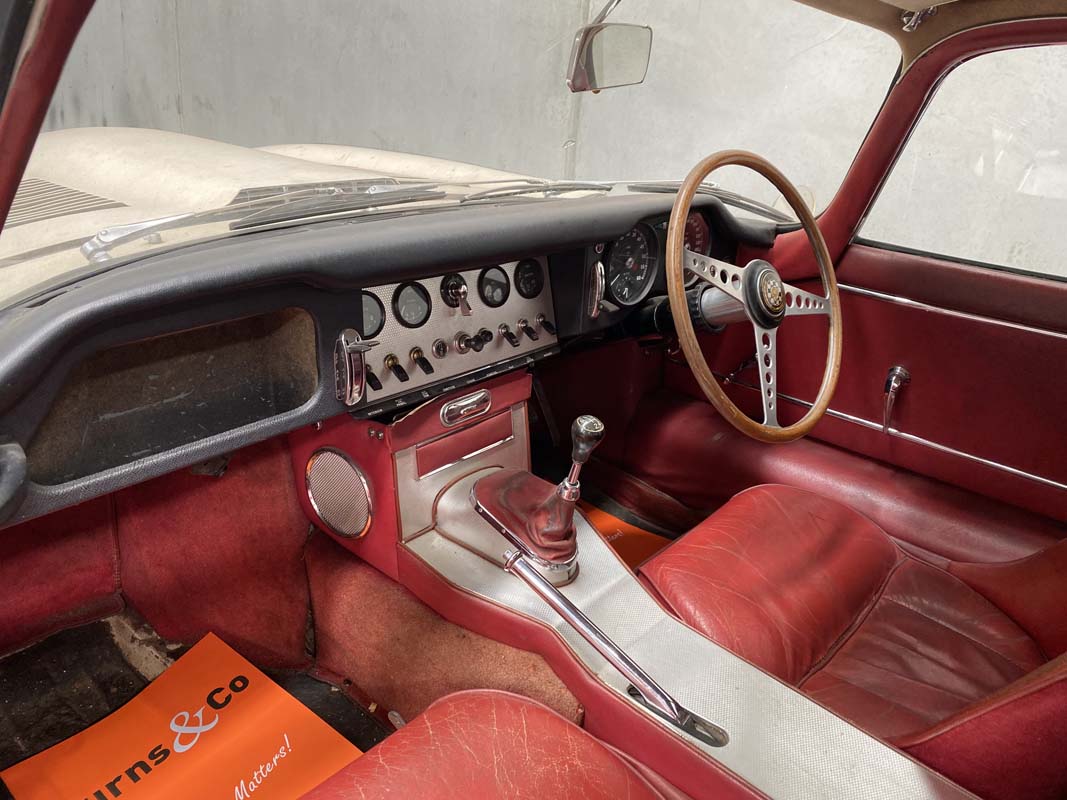 While in need of restoration, the car is mostly complete and appears in decent condition overall, aside from a missing accelerator pedal cover and what appears to be rust below the bootlid. Listed mileage of 48,485 is likely to be accurate. 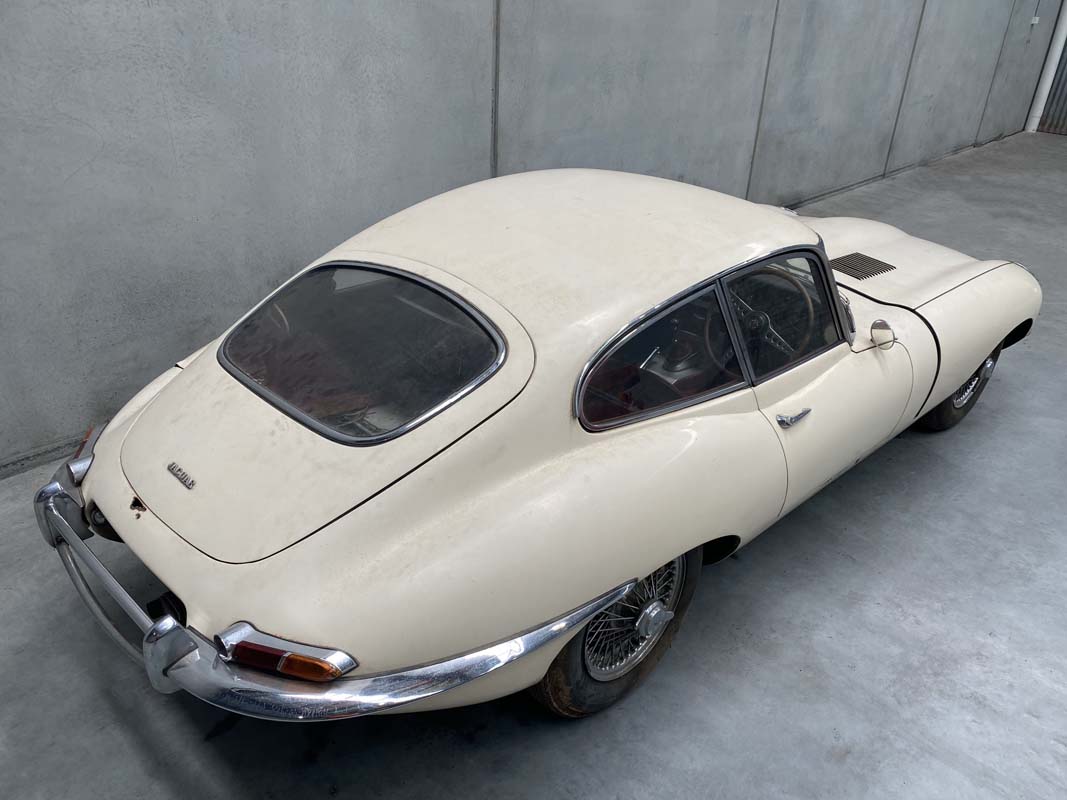 At time of writing, bidding on this restorable E Type was already in excess of $42,000.

See more on this car HERE 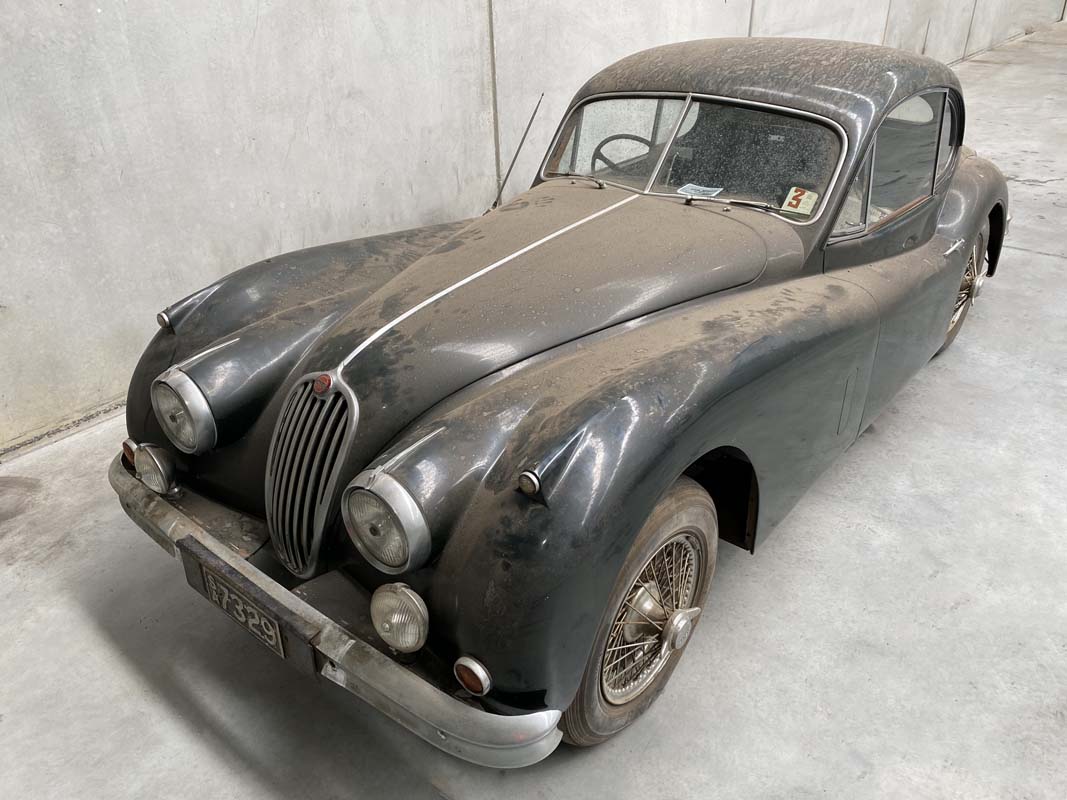 Features defining the XK140 included more cabin space, achieved through a higher roof on the fixed head coupes and moving the 3.4-litre six-cylinder engine forward. That engine offered more grunt, too, rated at 190hp compared to 160hp from the XK120, while an available C Type head (as fitted to this car) increased top speed over the standard 120mph (193km/h).

There were slight changes to the body styling and more options, too, including overdrive (also fitted to this car) and an automatic transmission from 1956. 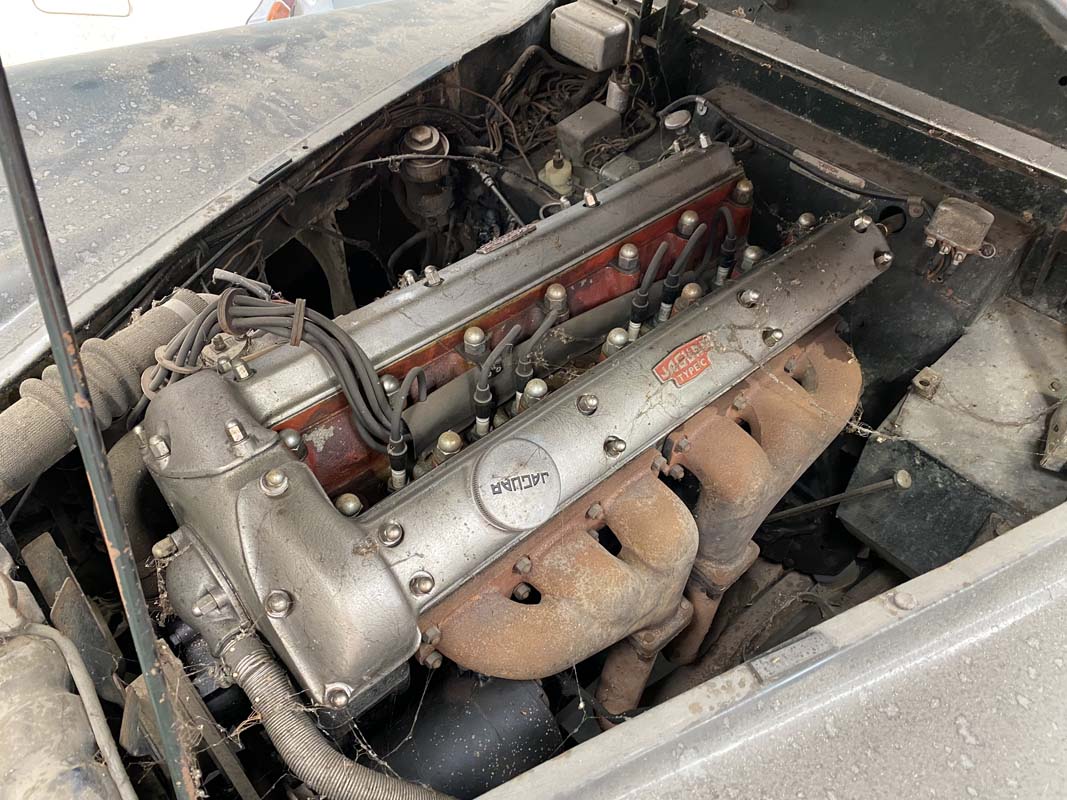 Described as one of only 843 RHD XK140 fixed head coupes built, this example was first owned by Derek Jolly of the Penfolds winemaking family in South Australia.

Known within SA for the ‘Futuro’ house in North Adelaide, as well as bringing the first Moog synthesizer to Australia, Jolly was also a keen racer. 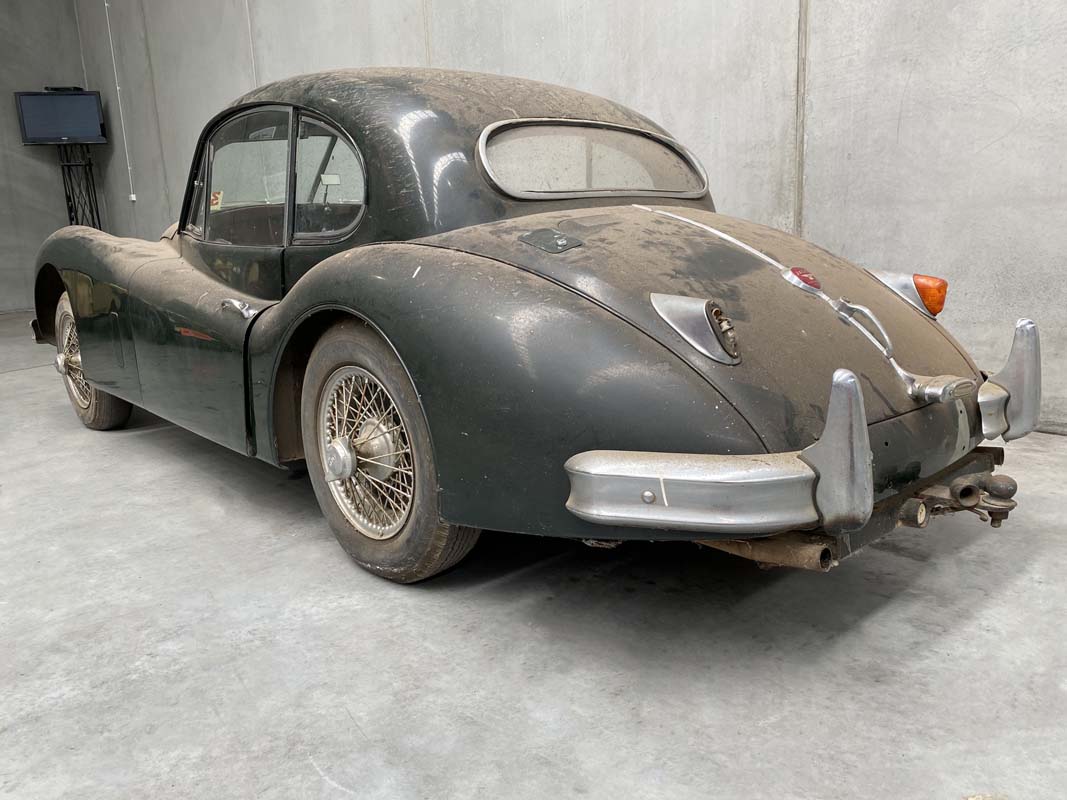 Starting in souped-up Austin 7s, Jolly graduated to various Lotus cars, a succession of his own Coventry Climax-engined ‘Decca’ specials, then Lotus 15s. At one point, Jolly was also Lotus’s exclusive distributor in Australia.

That enthusiasm for motor racing explains the tow bar - a rarity - on this XK140, showing Jolly used the car to tow his racers. 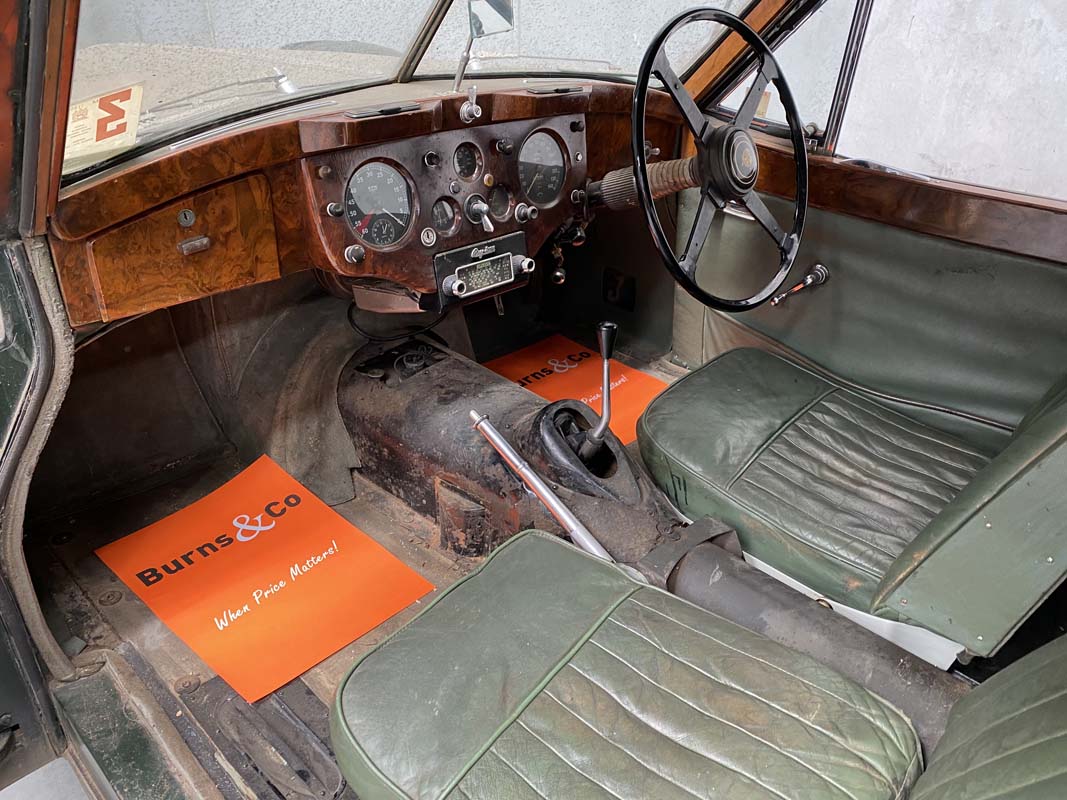 First registered in the UK by Jolly before shipping to Australia, this XK140 is original in most respects, including the British Racing Green paint and complementary green interior with lashings of walnut on the dash and door cappings. The instruments are authentic and the radio appears to be a period addition.

After Jolly parted with it in February, 1961, this XK140 came to Victoria in 1962, but it seems it was never re-registered as it still wears SA plates. 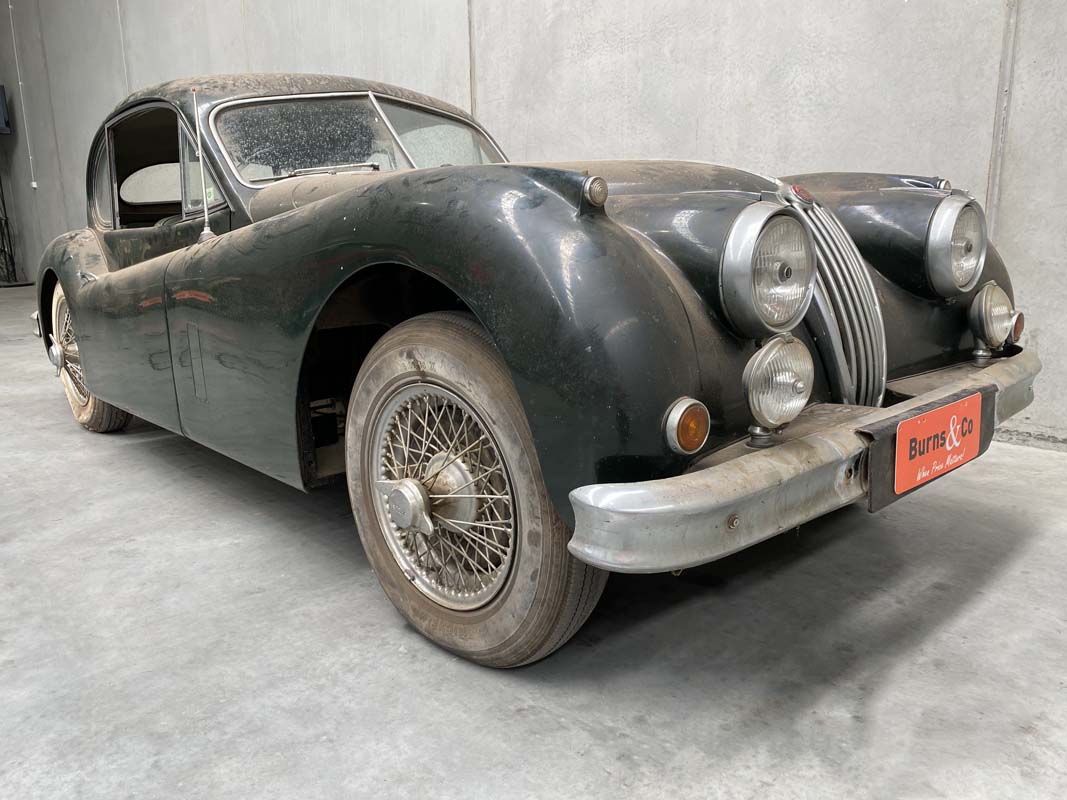 With 65,350 miles on the odometer and appearing to be complete, this XK140 fixed-head coupe is a rare example. 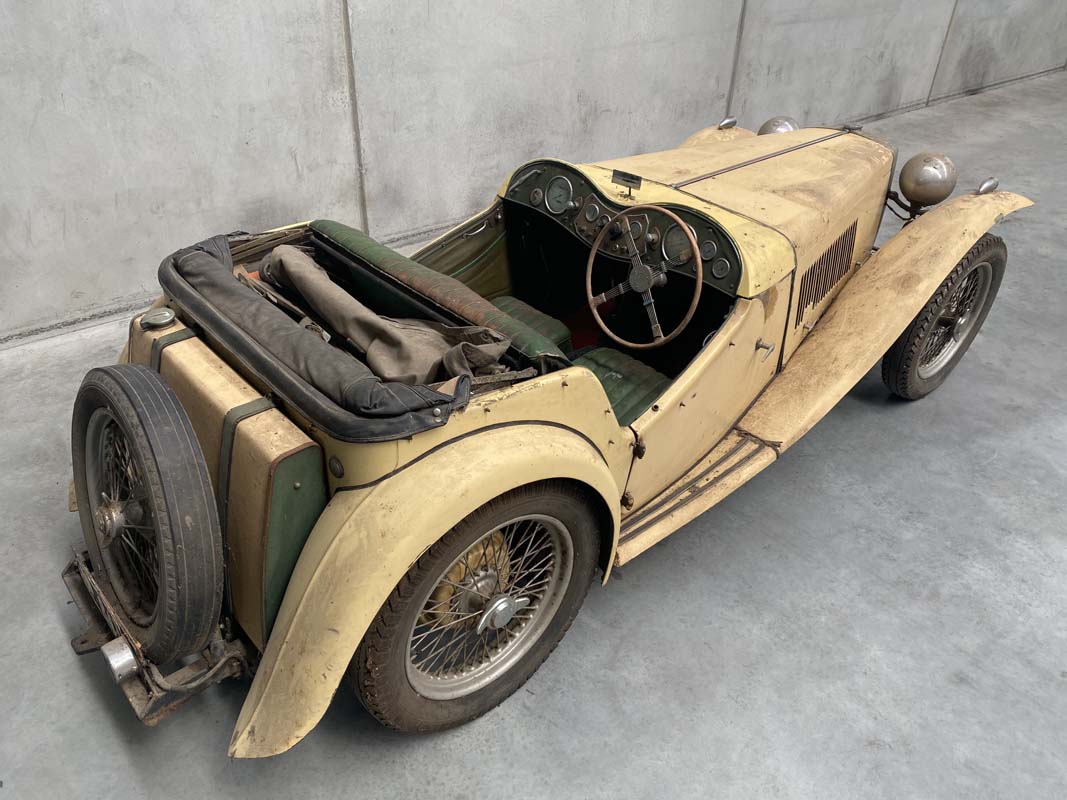 A mild makeover of the TB sports car that was released just before the outbreak of World War II, MG’s TC came in 1945 with the same 1250cc four-cylinder ‘XPAG’ engine (although with slightly more power) and the same four-speed transmission, leaf spring suspension, drum brakes and centre-lock wire wheels. The main difference was a wider (around 10cm) cabin, but the body still used steel panels on a timber frame. 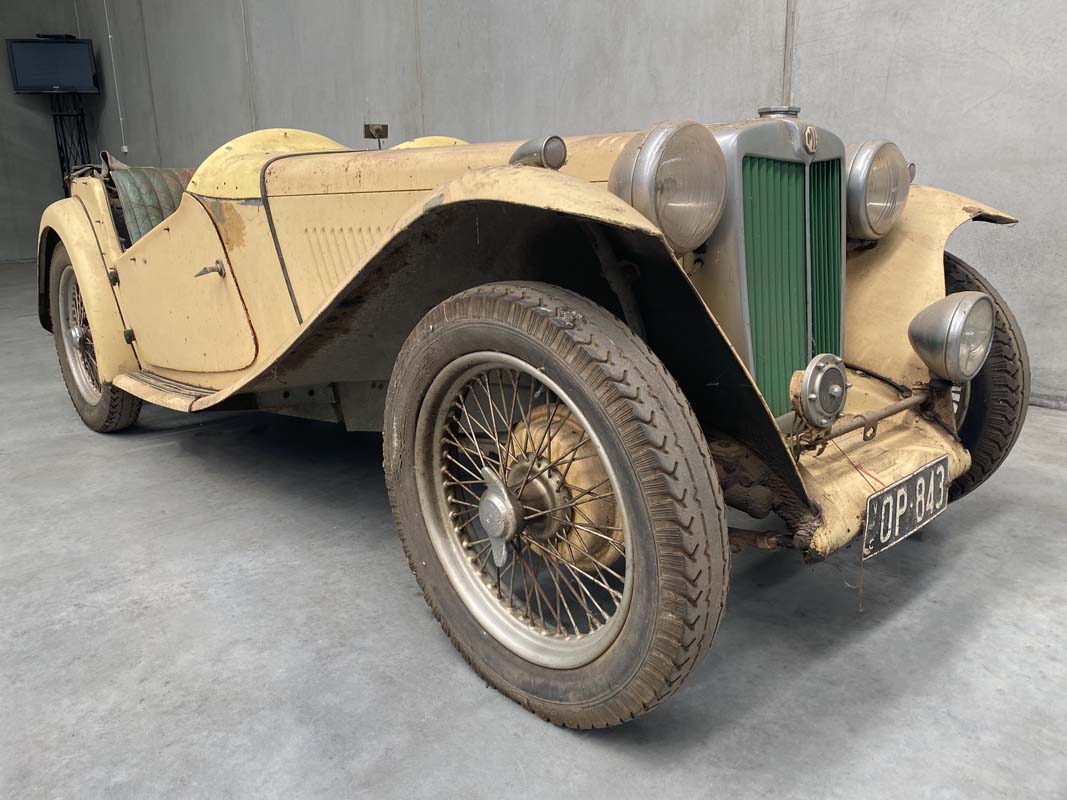 Although only 379 TBs were made before the war ended production, they attracted enough attention, especially amongst US servicemen stationed in England, that TC production boomed, with 10,000 built between 1945 and 1949. Most were exported, including to Europe and the USA, despite the TC never being offered in left-hand drive. 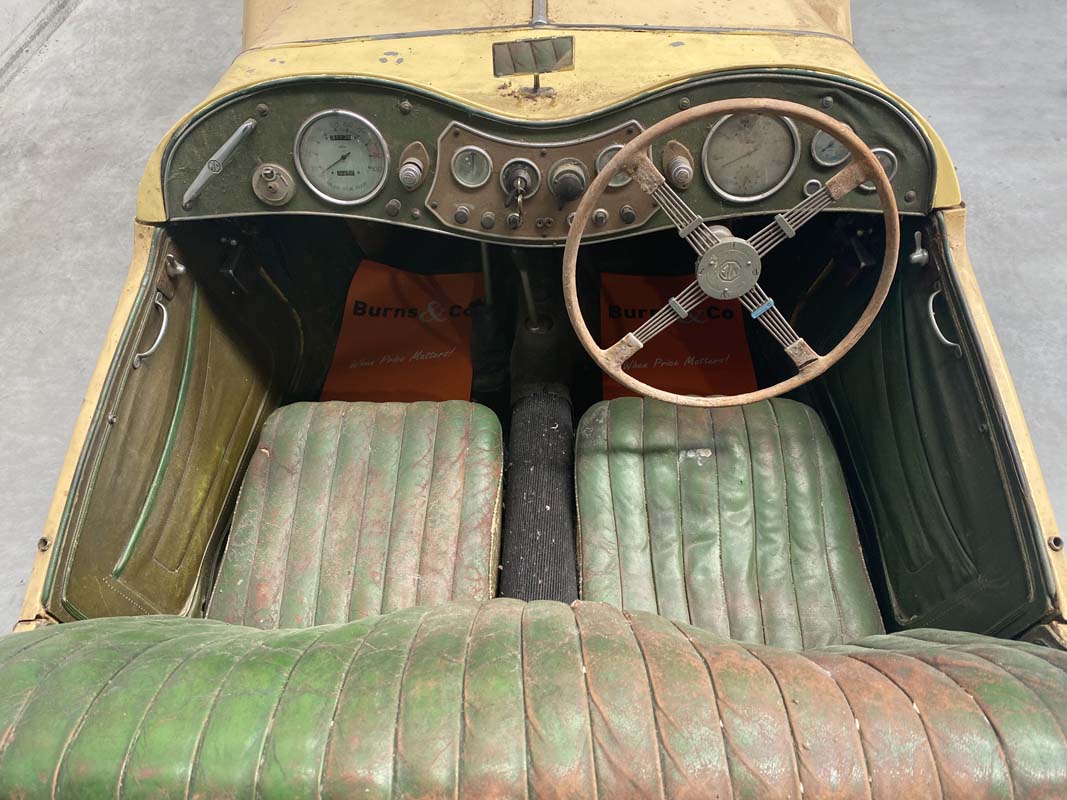 Coming from the final year of TC production, this 1949 example is finished in period accurate cream paint with a green interior. There’s evidence of repair below the cowl on both sides, but no obvious signs of rust elsewhere on the body.

Although not fitted, the factory fold-down windscreen is included, along with the rudimentary weather protection that MG offered with these roadsters. 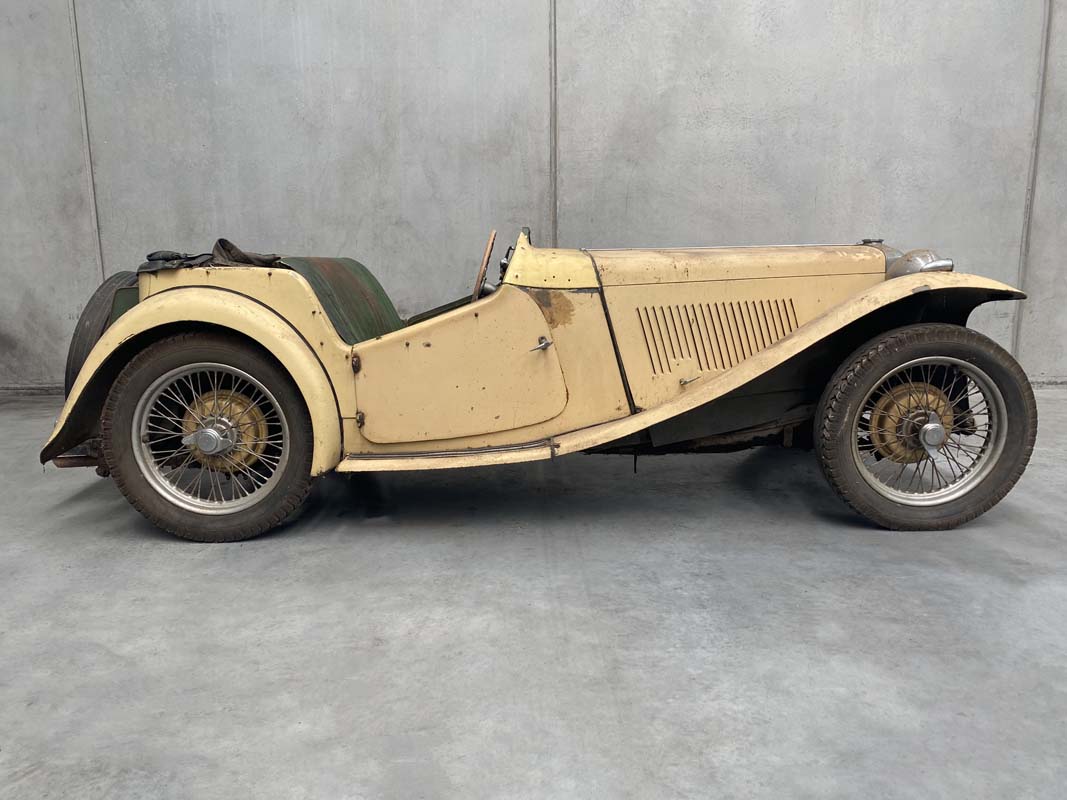 Victorian registration from January, 1950, suggests this ’49 TC came to Australia new, while provided documentation indicates the car came into the possession of its last owner in 1961. Although it appears it was on the road until late 1963, registration was paid annually until the late 1980s. 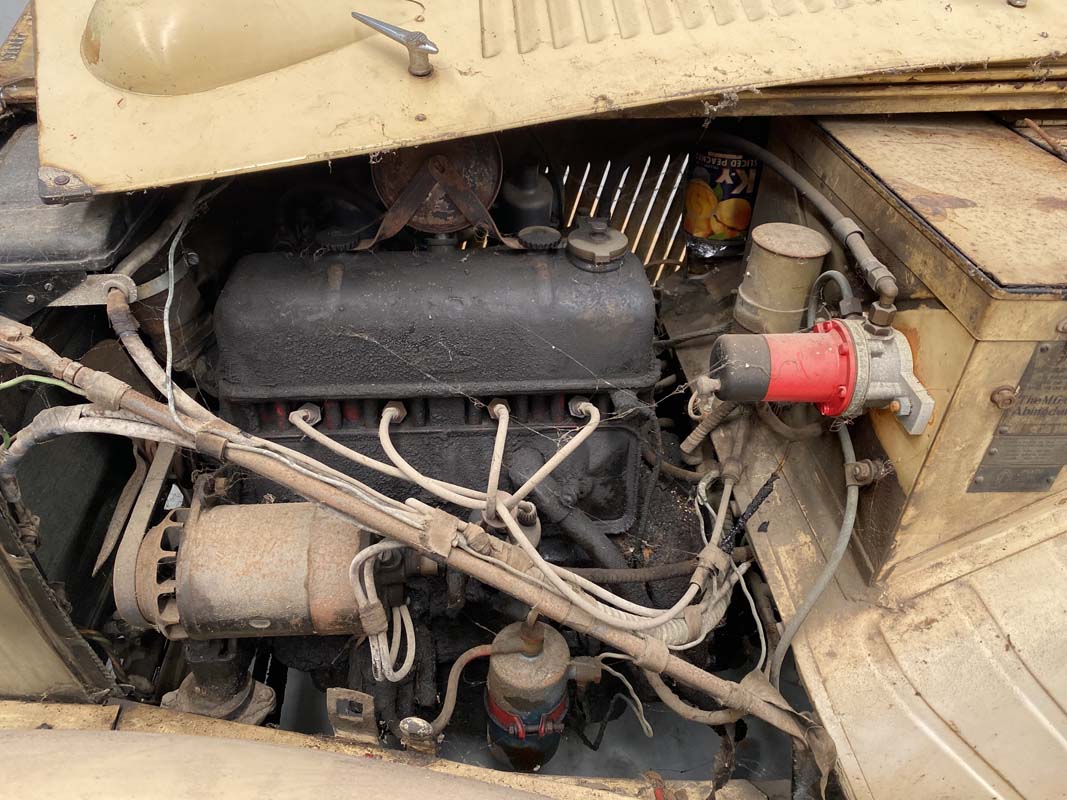 Like the two Jaguars, this MG has long term Australian history and appears to be in complete and restorable condition. The odometer reads 31,136 miles. 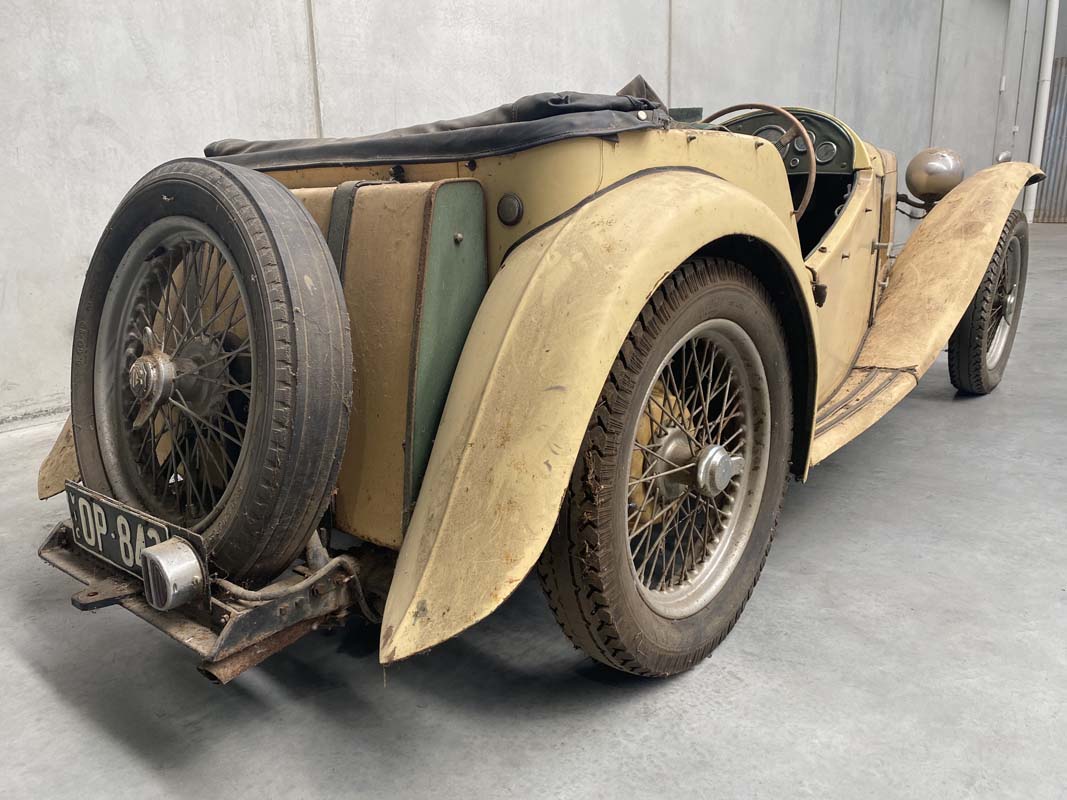 These three barn finds - and all other lots from Burns & Co’s February auction - will go under the hammer on Sunday, 6 February, with selling commencing from 12 Noon. Online pre-bidding for registered bidders is open now.

For auction details, pre-auction inspection times, how to register for online bidding and the full auction catalogue, click HERE.