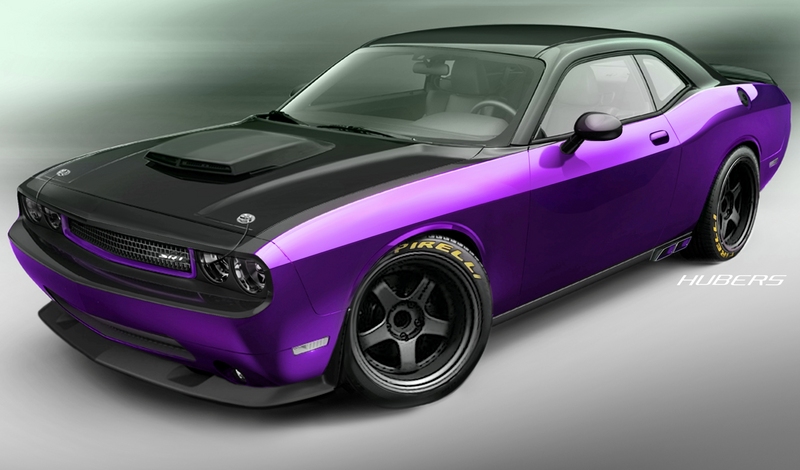 Dubbed 'Project UltraViolet', what Chrysler describe as "a modern day hot-rod" is based around a 2012 model Dodge Challenger SRT8, but with a bunch of custom touches and performance upgrades, all of which were completed within a very tight six-week timeframe.

Dunham (who's also a ventriloquist), along with Alan Palmer of Palmer's Customs, worked closely with Mark Trostle, Head of SRT, Mopar and Motorsports Design, Chrysler Group LLC, on Project UltraViolet to transform the Dodge Challenger SRT8 and help guide the design and customization process.

"It was great to work closely with Jeff and create a remarkable, one-of-a-kind 2012 Moparized Dodge Challenger SRT8," Trostle said of Project UltraViolet, which takes its name from the two-tone paint scheme that combines an 'ultra'-violet body color with a black upper half.

"The project shows the possibilities of what customers can do to customize and modify our vehicles with more than 150 quality-tested performance Mopar parts and accessories for the Dodge Challenger."

Under the Mopar T/A bonnet, with functioning air scoop, is the most noteworthy change - a new Mopar 426 crate engine, with 515 horsepower and 490 lb.-ft. of torque. The project also takes advantage of the new engine tuning capabilities performed by Arrington Engines, a Mopar-authorized tuner that creates performance calibrations for select 2011, 2012 and 2013 model-year Chrysler Group vehicles.

Following drawings and design suggestions from Trostle and the SRT team, Dunham, Palmer, and crew went to work on the vehicle's visual transformation.

"Alan and his guys do some of the best work my car buddies and I have ever seen. That's why I chose them for this job," said Dunham, who's a fan of classic muscle cars and owns a 1970 Plymouth Barracuda convertible.

"Everything from absolutely perfect body lines, to custom-built aluminum panels and parts, to paint work that's unmatched, this is no 'looks great from 10 feet away' custom job. And believe me, the first rock chip I get is going to make me weep."

The Challenger is lowered 1 inch and equipped with 22-inch HRE brand performance wheels sporting a matte and semi-gloss black finish. The rear end is wider, and larger more dramatic wheels flares are added to both front and rear to widen the body 4 inches and create a muscular, more sinister appearance.

The team also added a new slightly larger grille, created with a water-jet cut out of .25 inch plate 441 aluminium and moved it forward 2 inches to match the new placement of the front bumper. Headlamp lenses are added along with tinted taillights.

When looking under the bonnet, the new engine is tricked out with the final "cherry on top" ornamental valve covers with "UltraViolet" moulded in to colourfully blend the entire scheme of the car together. All of these new elements create an old-school muscle-car look, and contribute to the machine's aggressive design. 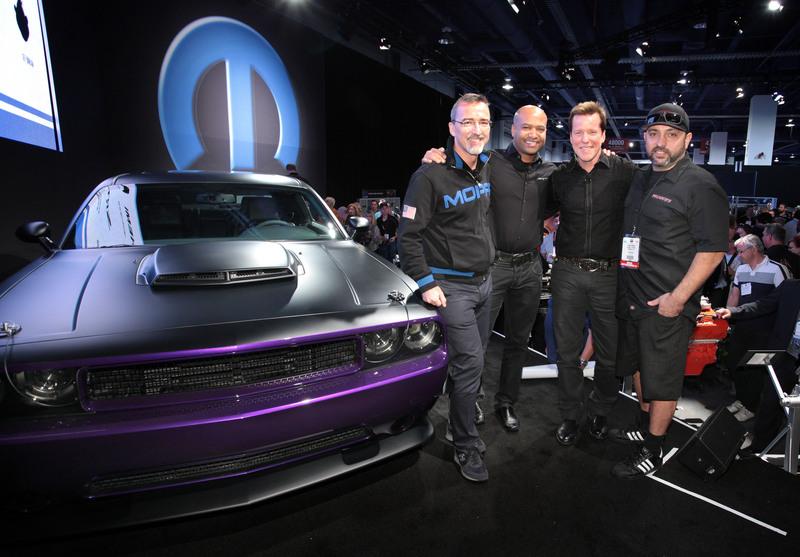