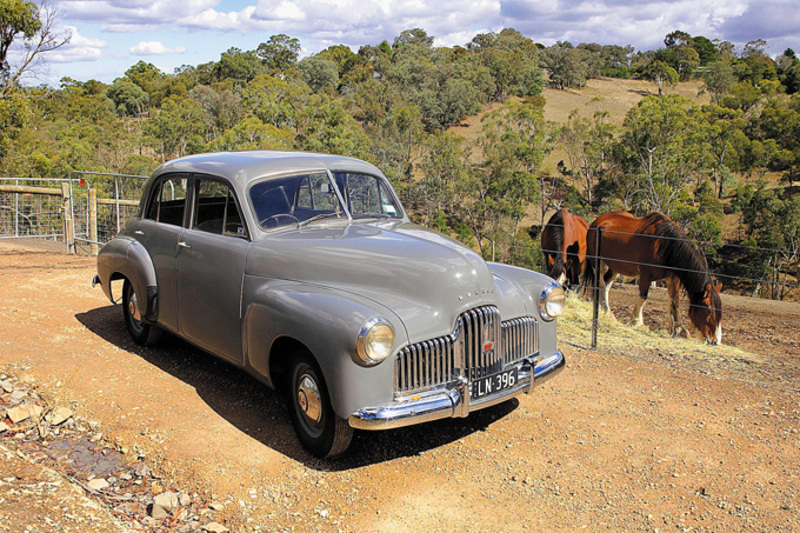 With body #19, it is the second oldest Holden body still in existence, but what makes this particular FX even rarer is that it is the oldest Holden to still carry the same registration number from new. Fans of early Holden history may already be familiar with this car, as its early (October, 1948) build has earned it a place in Don Loffler's authoritative book on early Holdens - She's a Beauty. Similarly, those same early Holden fans will no doubt have heard of Phil Munday - Australia's acknowledged guru on all things early Holden.

Phil can list a genuine, restored Army FX ute, 'Cordell' FJ Station Wagon replica and a number of restored and original early FJ Holdens in his collection. Regular JUST CARS readers may also recall when we ran an article on the 'Goodwood' FX racecar Phil played a major part in creating for Peter Brock to drive at the Goodwood Revival in 2006. While not particularly looking for a very early Holden like this, when the opportunity came up to purchase the #19 48-215 in 2006, Phil decided to take the plunge and add it to what is already an impressive collection.

Since then, interest in these earliest Holdens has increased, with the owner of #46, Charlie McCarron, reportedly knocking back an offer of $900,000. Supplied new to James Coxon's Holden dealership in Casterton, Victoria, the Convoy Grey #19 48-215 served as a demonstrator for several years before Coxon gave it to his daughter. After a repaint in green, the car came back to Coxon Motors in 1956. Fortunately, Coxon's son-in-law, Keith Brown, recognised the significance of such an early Holden, returned it back to its original Convoy Grey and kept it as a display vehicle for the dealership's three branches.

Only 163 Holdens were built in the 48-215's debut year, so finding one at all, let alone one this original is rare in itself. It has all the quirks of these early production models (see sidebar), as well as being the Australia's oldest continuously registered Holden. When Phil recently decided to put it back on the market, we were only too pleased to feature such an historically significant Australian car in these pages.

The asking price of around $350,000 is a reflection of its rarity and significance. One would hope the new buyer keeps it in the same good original condition.


Ooops. Better fix that bit!
Design faults and problems with the early 48-215s soon became apparent once Aussies got their hands on one. With the benefit of hindsight, issues like the ones listed below may seem glaringly obvious, but it must be remembered that on its debut in 1948, the 48-215 really was an all new model, and all the testing under the sun could be no substitute for 'real world' usage.

Most of these faults were rectified on later 48-215s. If you've got an 48-215 with some of the features listed below, it's a fair bet you've got a very early example.

Bonnet latch was moved from the front to the rear of this panel from April 1949 onwards to lessen the likelihood of it springing open in the event of a sudden jolt to the front of the car.

Vertical slots for the cap in fuel neck resulted in spillage out of the bottom slot, so they were changed to a horizontal position.

Positioned at the trailing edge of the door, rear door locks were inaccessible from the front seat, so were moved to the front of the rear doors from January, 1951.

While not a fault, the external tail light switch was a legal requirement in certain Australian states until around 1953. External switches like this are extremely rare today. 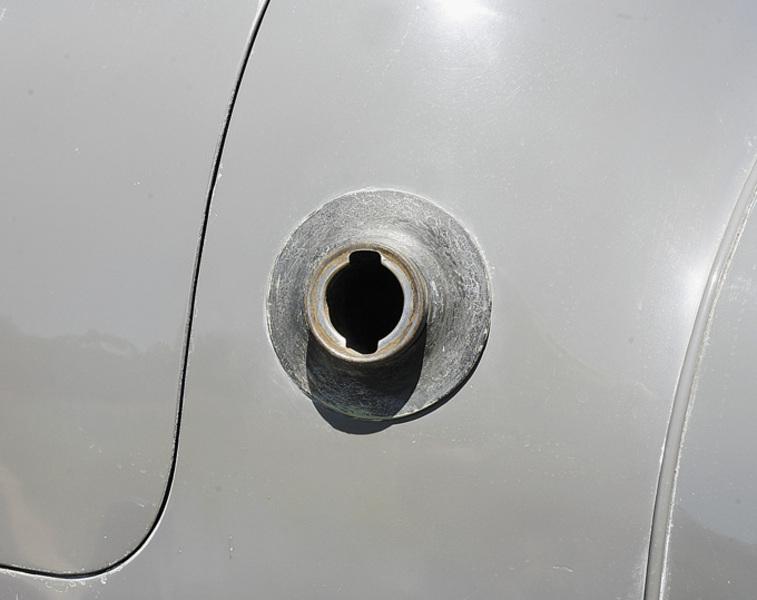 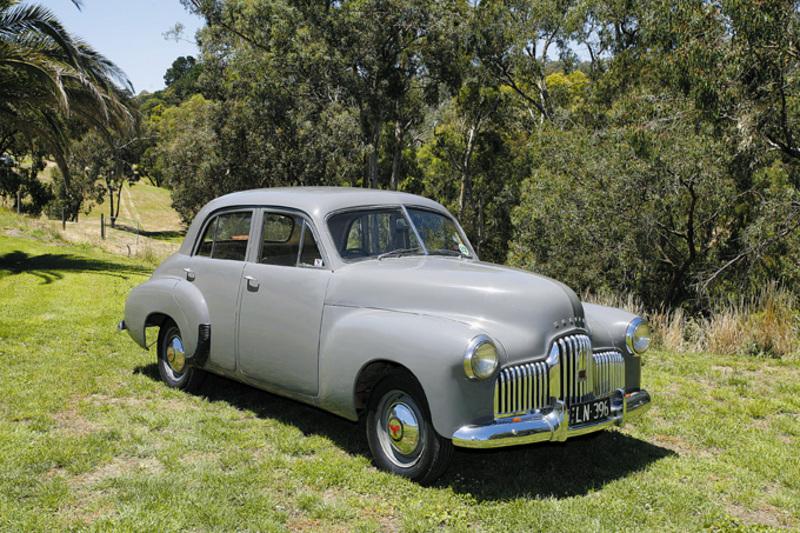 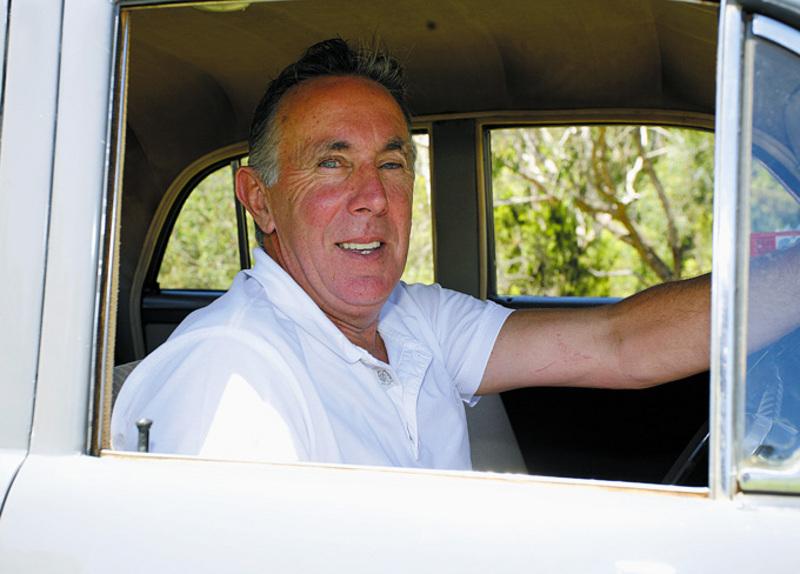 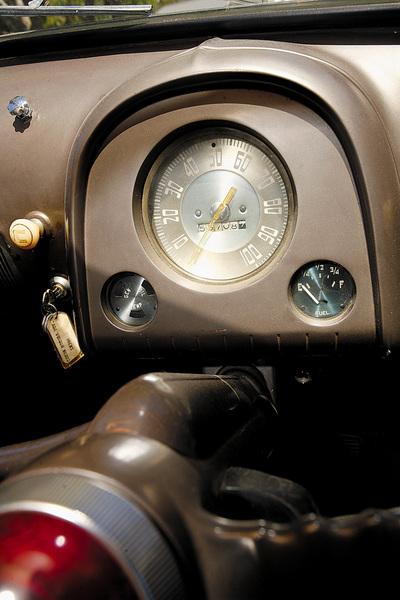 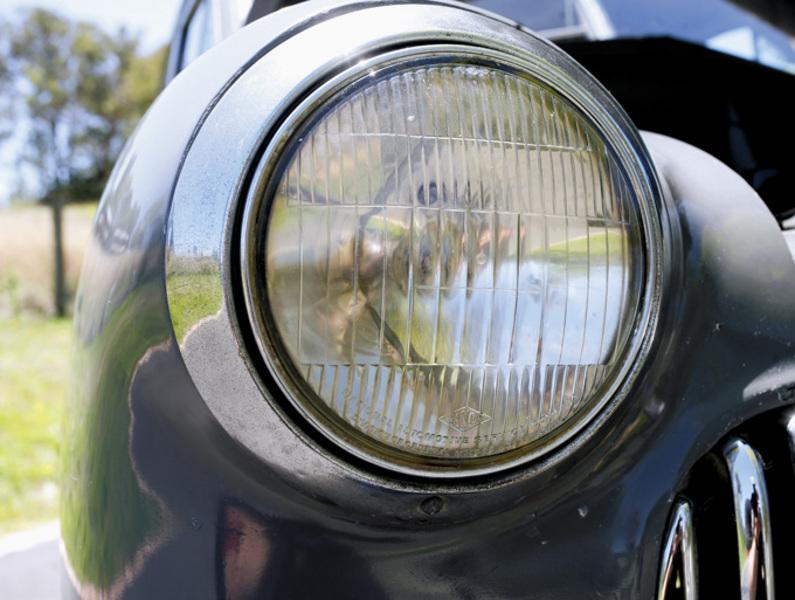 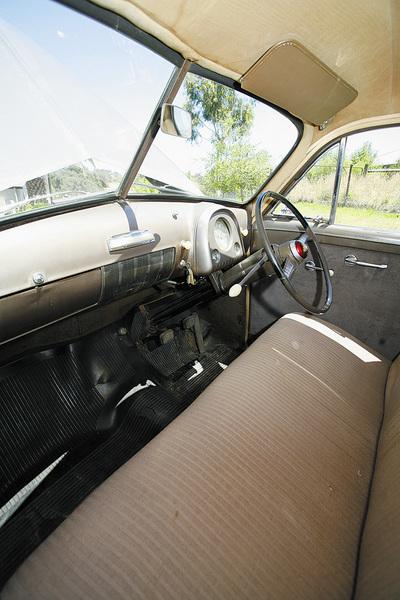 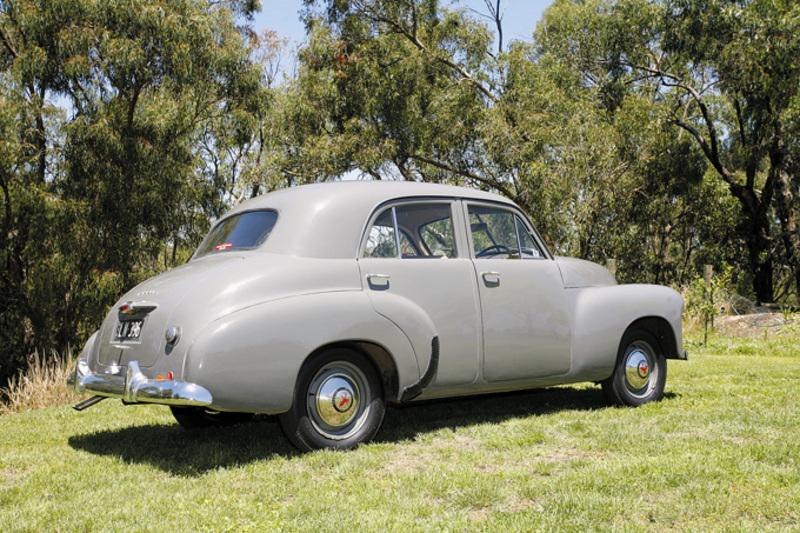 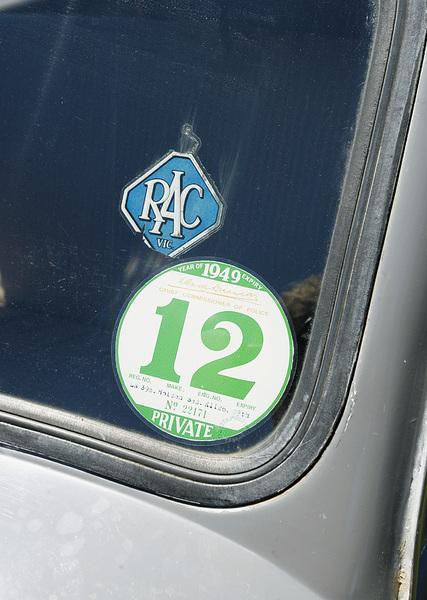 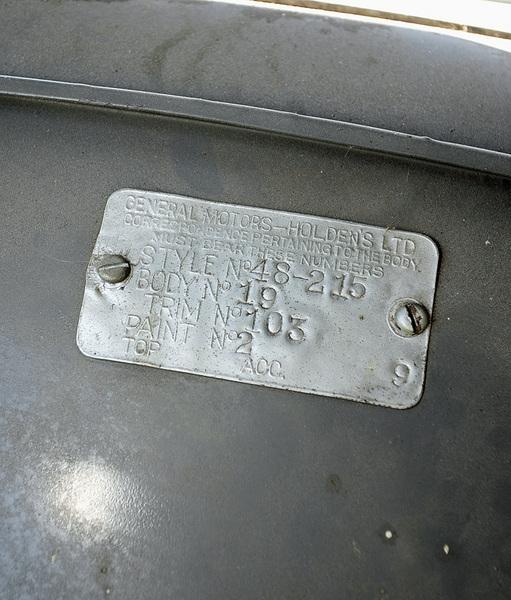 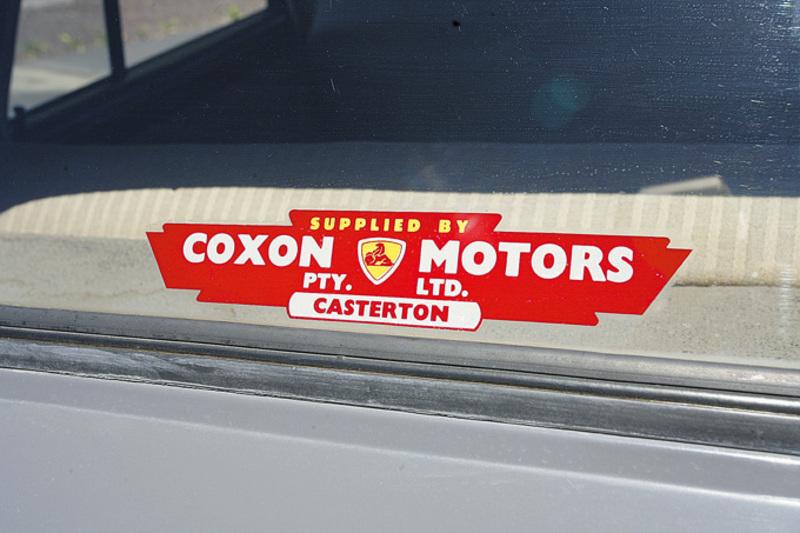 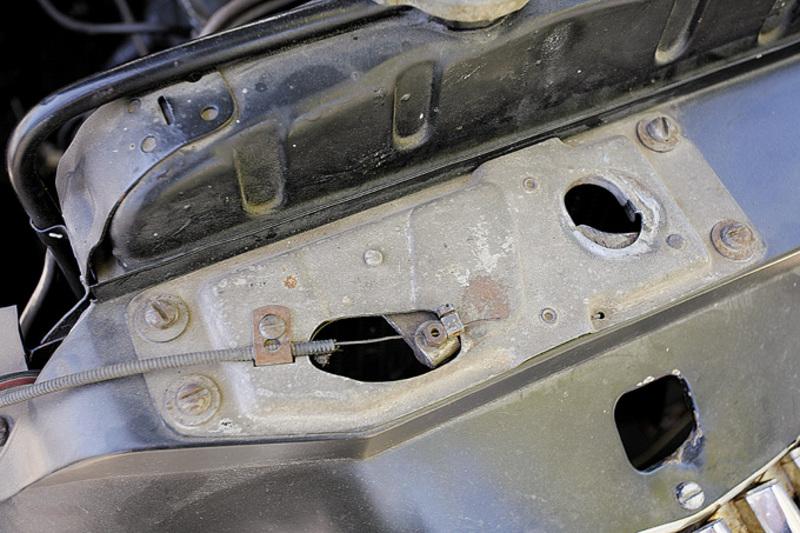 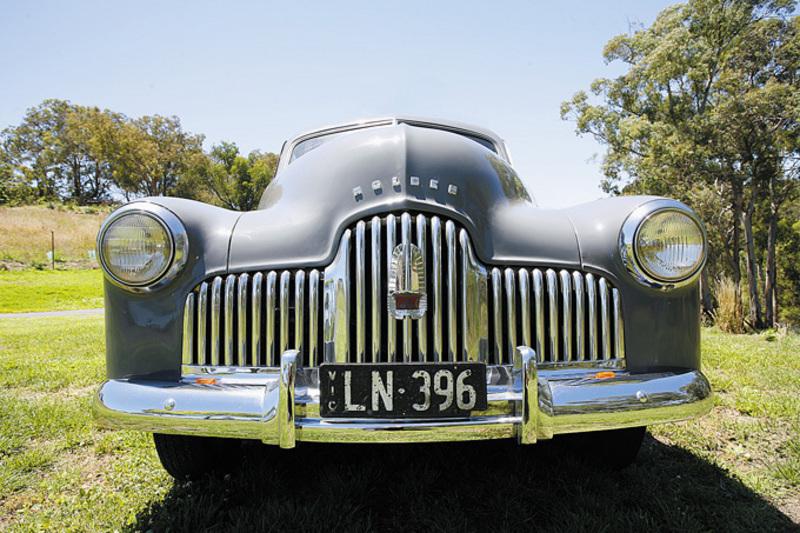 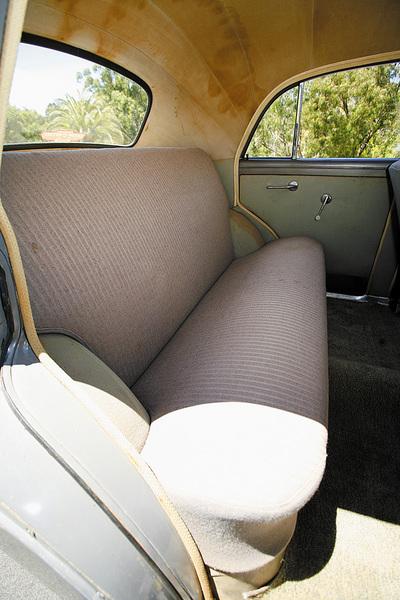 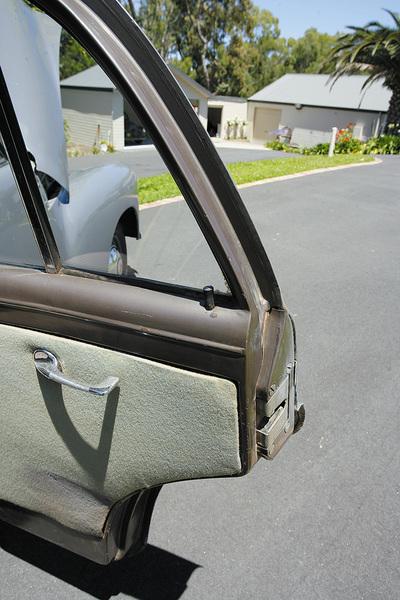 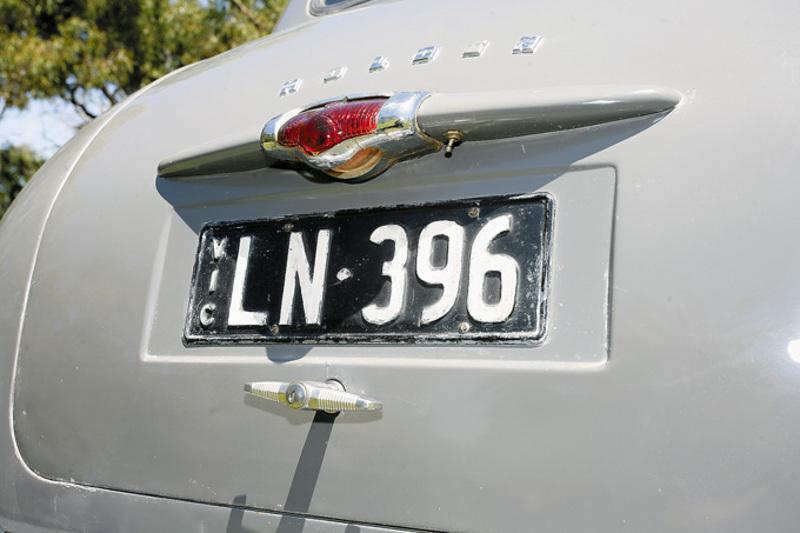