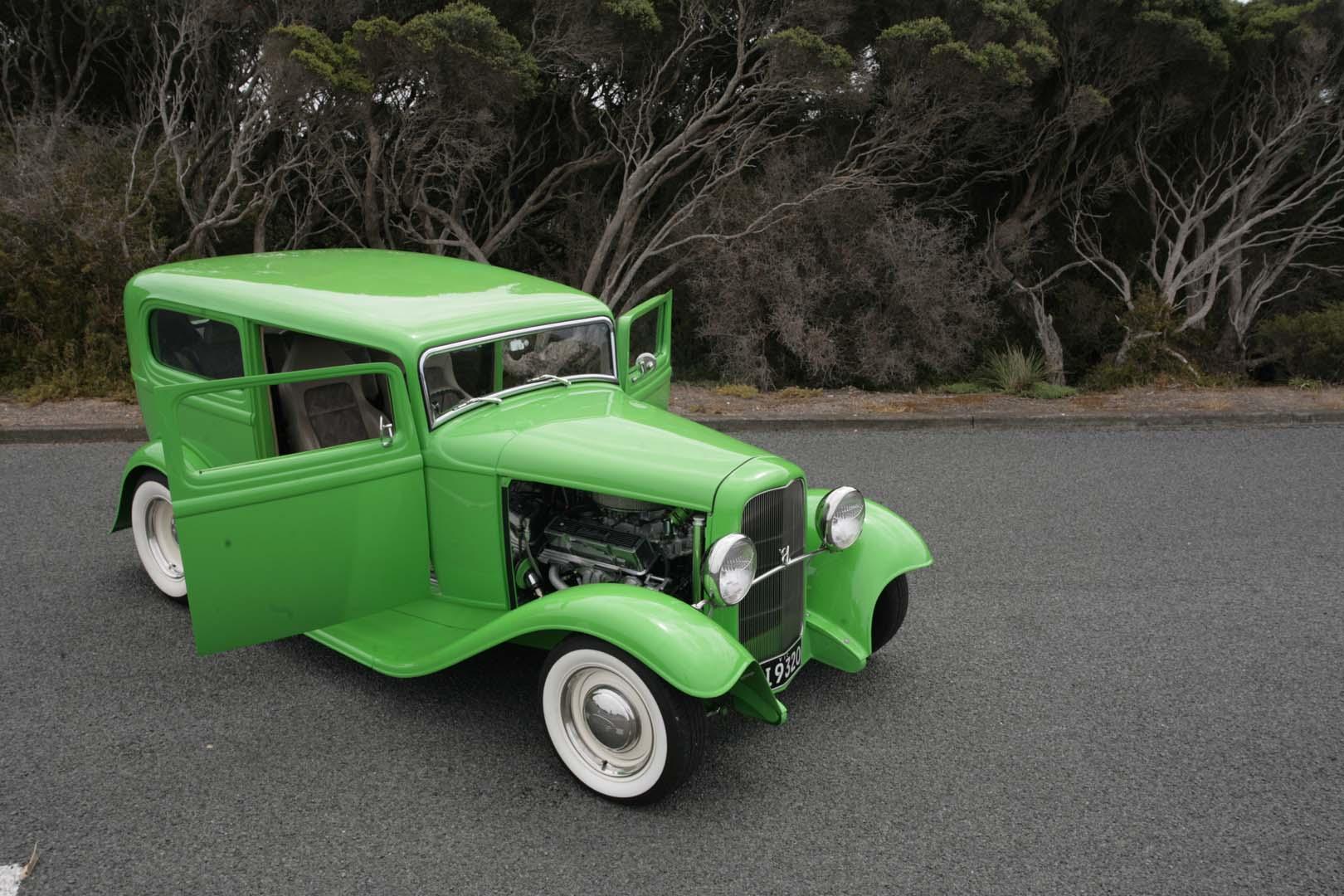 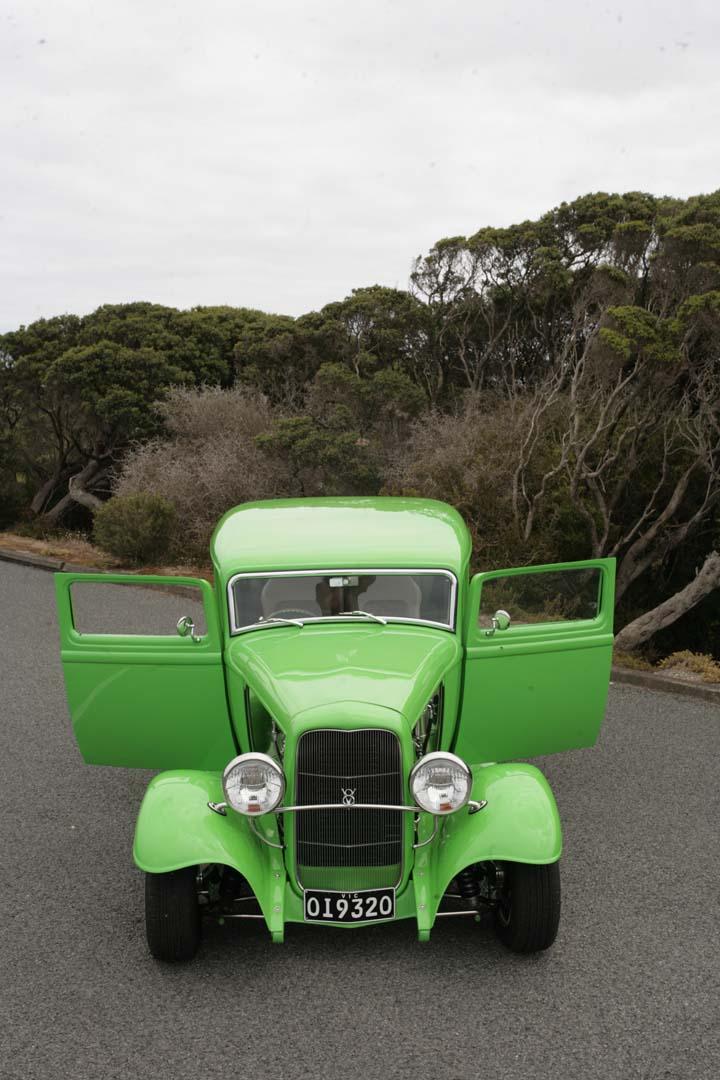 When it comes to building a modern hot rod, you can go down a number of different paths. There’s the path of the big-dollar, high-impact show car that rarely turns a wheel under its own power. There’s also the mammoth power path delivered by a big V8 augmented by a supercharger or turbos. Then there’s the street-spec route, with a comfortable interior and bulletproof drivetrain that’s made for cruising.

This ’32 Tudor is unusual in that it’s been down all these paths in its short history. 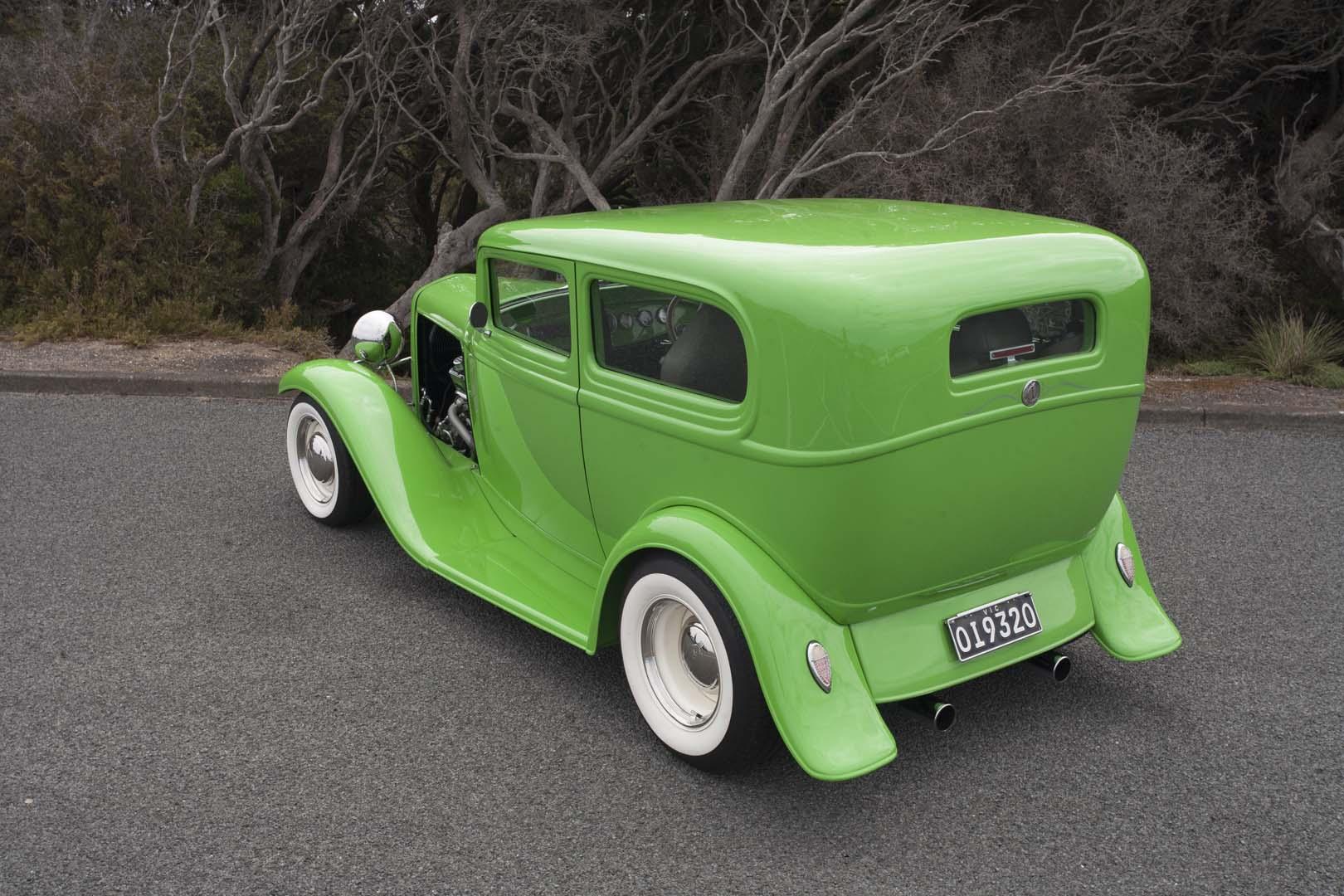 This car came to our attention through owner and seller (see breakout) David Montebello, who bought it just over a year ago.

What appealed to David at the time was its proven running gear of a 350 Small Block Chev, TH350 auto and 9-inch diff. The practicality of the Tudor body style for family cruising was another drawcard, but the unmistakable green finish of that Deuce Customs body was the real clincher.

David said he’d only been searching for a new rod for a few days when he spotted this one online. It ticked a lot of the boxes, but more importantly for David, it was a little bit unusual, too.

When we say “new rod,” we mean that this is the third hot rod David’s owned, but like this bold green Tudor, each of his previous purchases have been a bit different from the norm.

David says he likes stuff that’s a bit unusual and his past purchases in the classic and collectable car arena back that up. Most have been what you’d regard as fairly common models, but each has had a combination of features, a quirky touch to the driveline, unusual paint choice or uncommon interior trim that’s made it is a bit different from the norm. 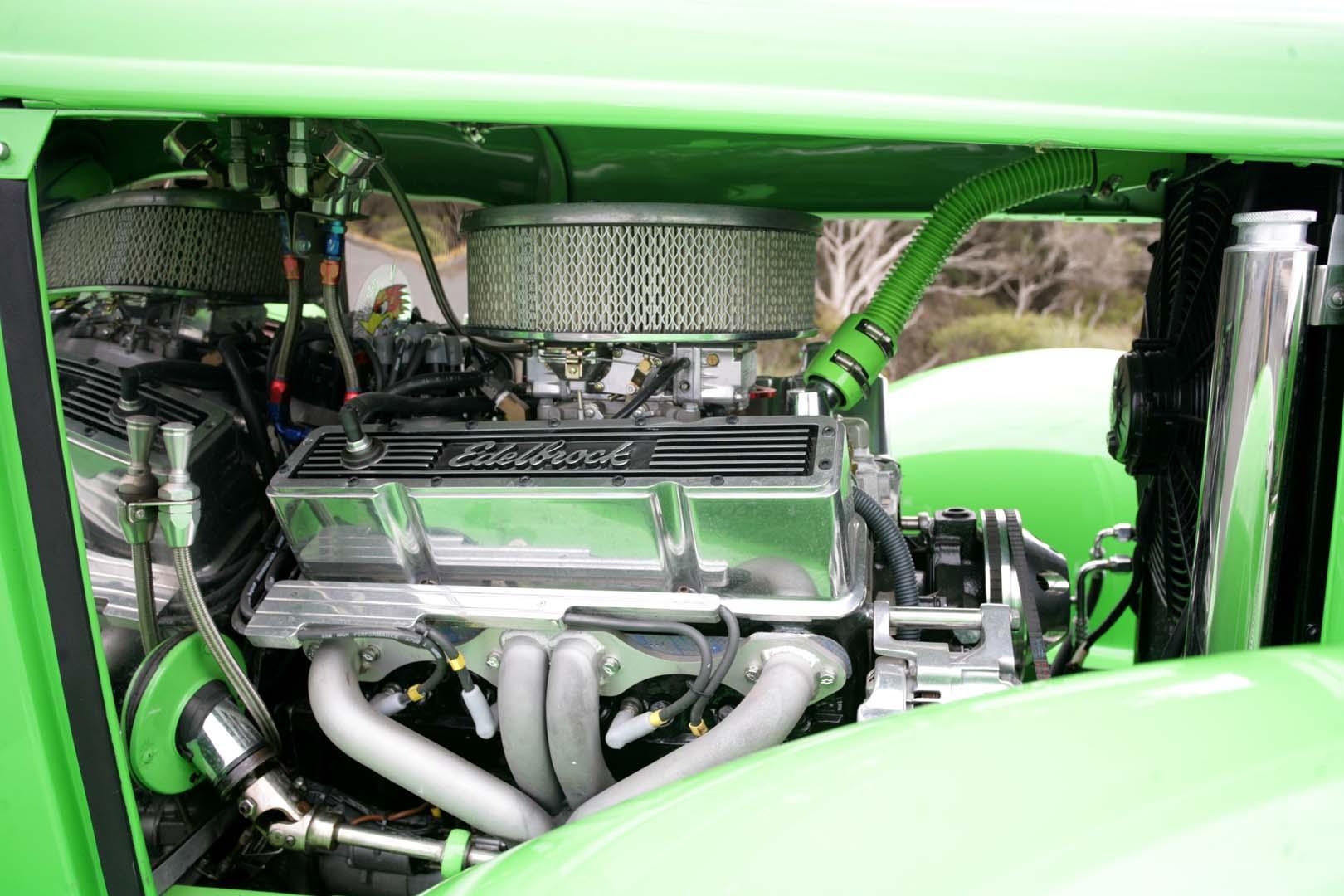 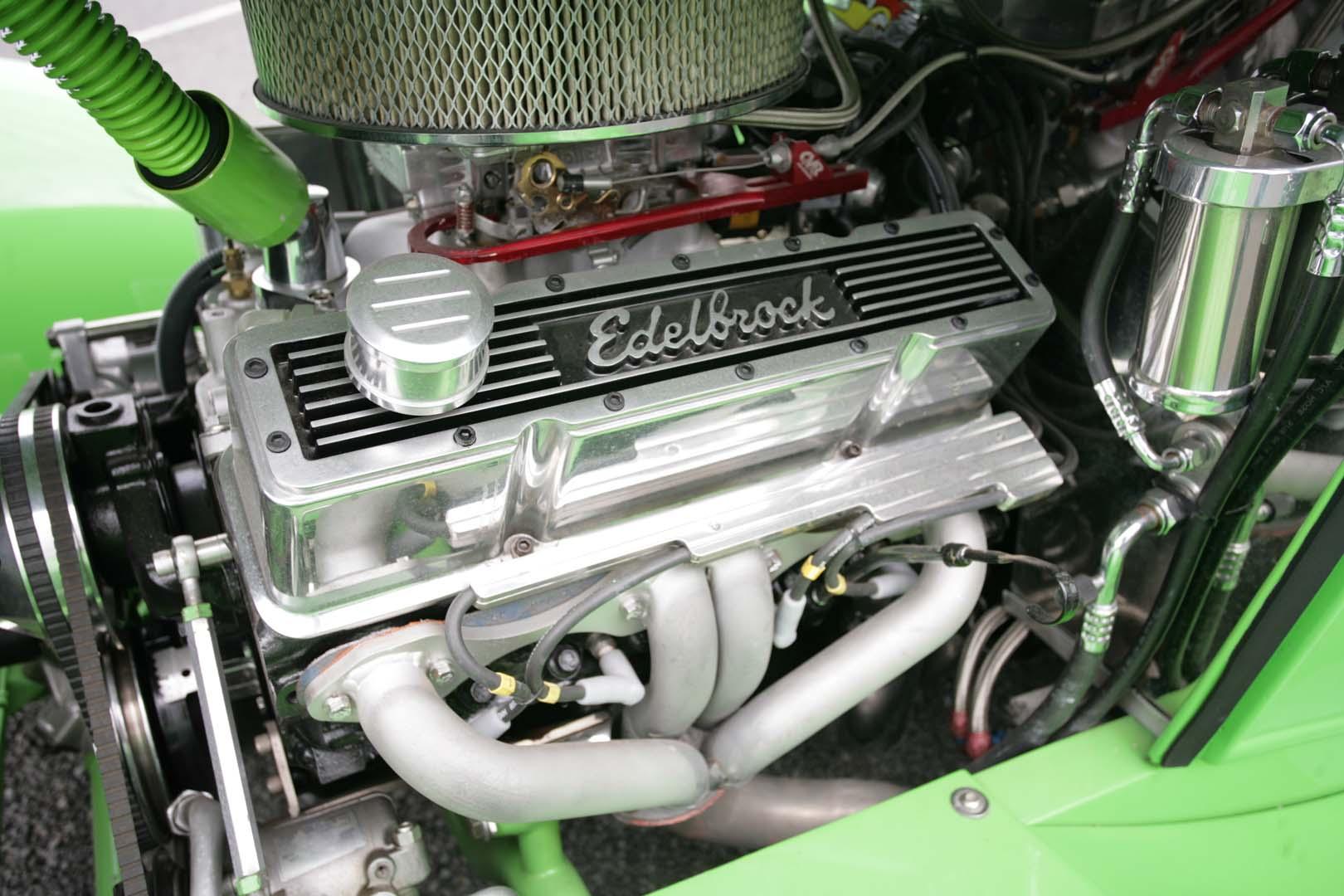 For example, David built himself an ‘Eleanor’ clone on a ’67 Mustang fastback a few years back, but instead of the silver-with-black-stripes these clones usually wear, David went for a black base with orange stripes.

Notably, all these cars have been bought over a five-year period. Success in business has enabled David to now indulge the sort of car dreams he had as a teenager.

David’s passed that passion on to his young son, who has an impressive Hot Wheels collection and, unsurprisingly, loves riding around in dad’s cool cars. This Tudor’s been perfect for that. 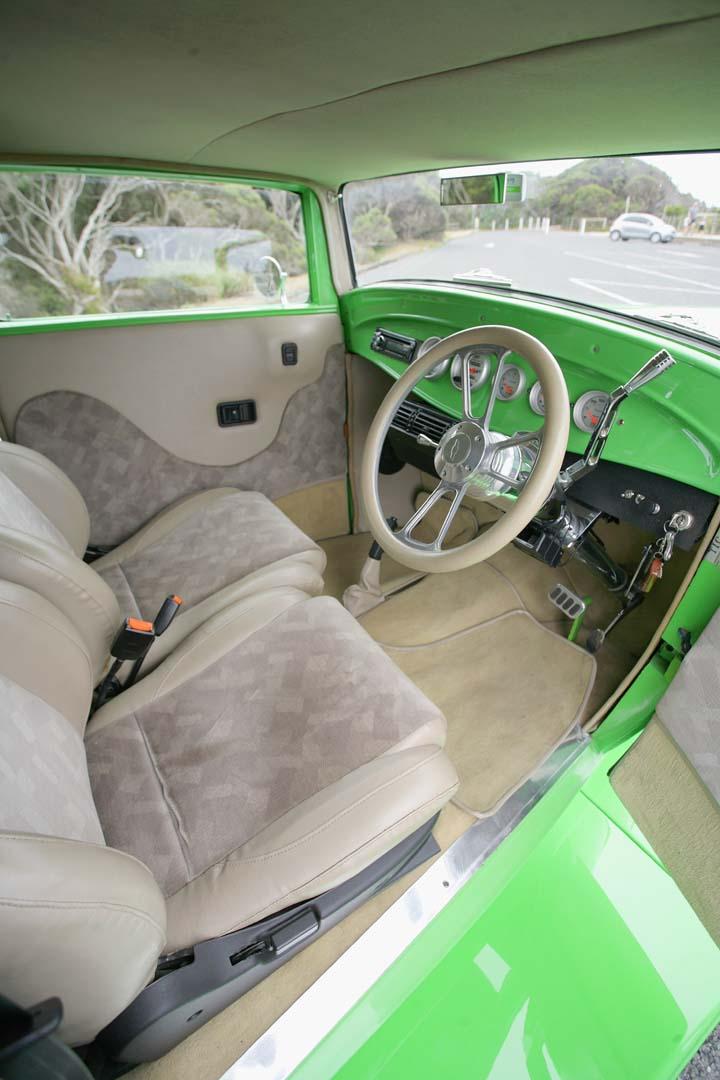 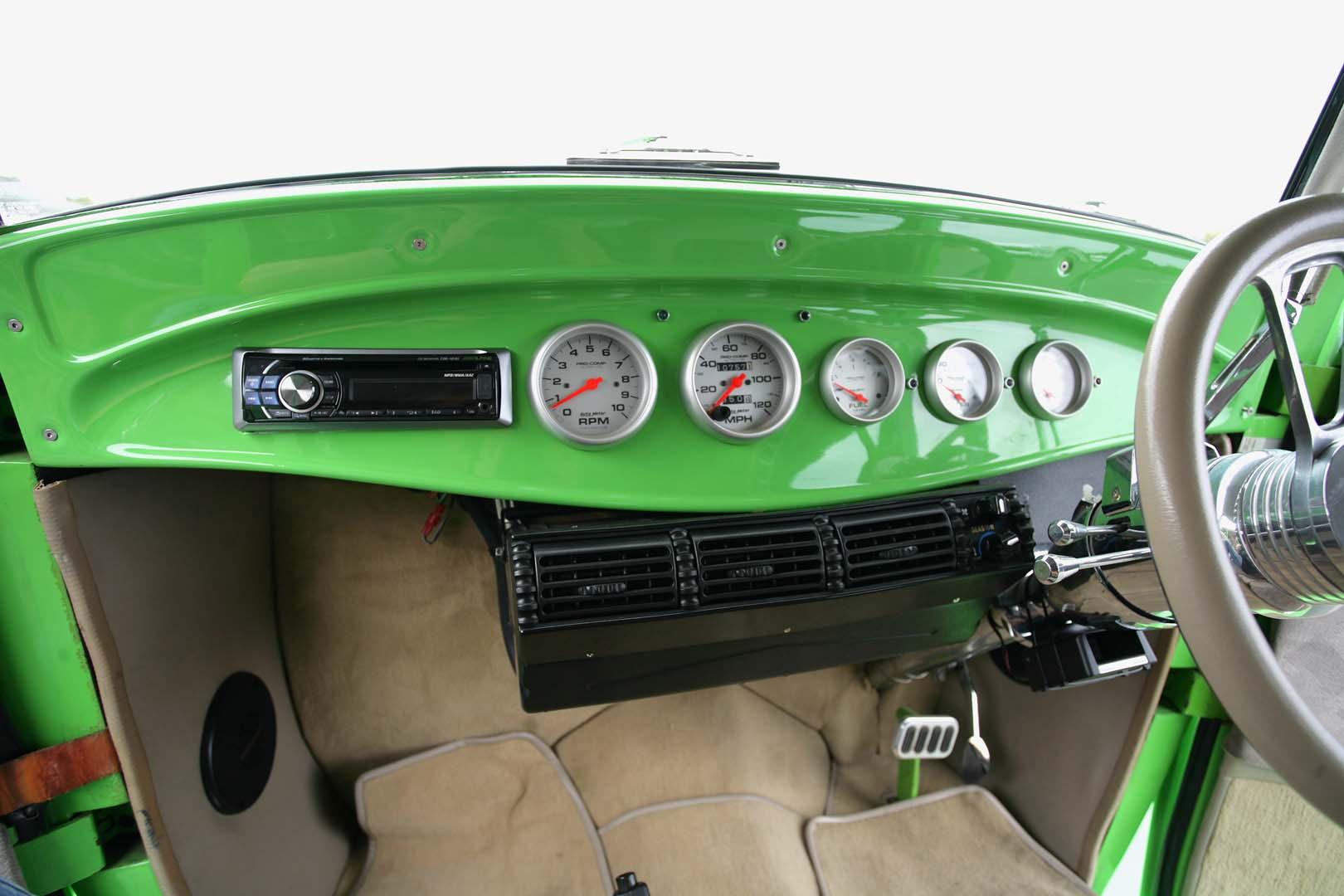 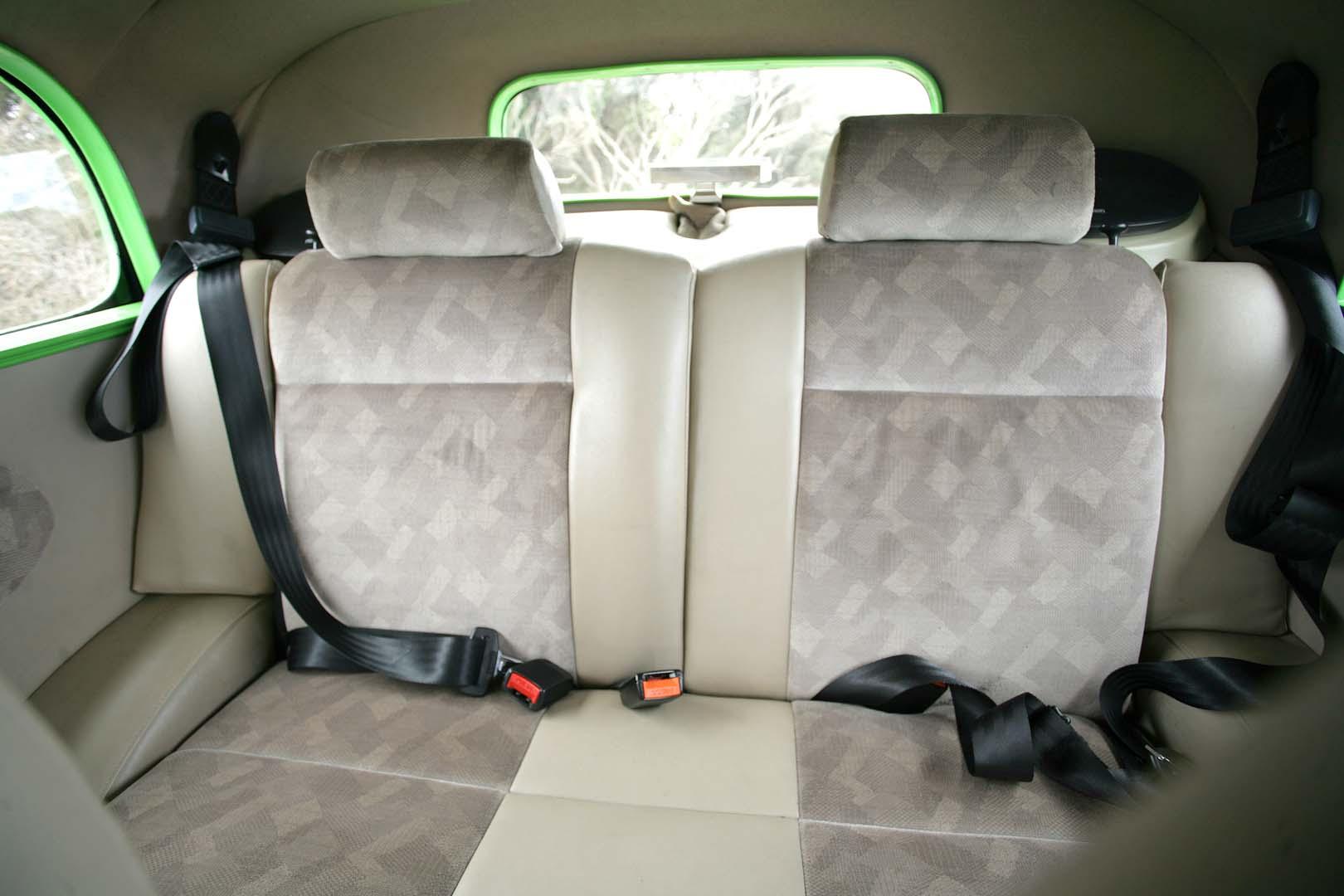 David had bought the car from fellow Victorian, Tony Cassar, who had in turn bought it from his cousin. The car’s history gets a bit hazy beyond that, though.

Tony believes the rod was originally built in Sydney, with a compliance sticker for a NSW-based vehicle engineer, dating from 2006, backing that up.

The basic specs are believed to be Rod City ’32 chassis rails, matched a Rod Tech front end and 4-bar rear, while the Turbo 350 trans suggests the rod was originally built with a 350 Small Block V8, but when Tony bought it in 2010, it didn’t have a motor fitted.

Building up his own 350 from scratch, Tony stroked it to 383 soon after, adding a Dyer’s supercharger and 3-inch exhaust system to suit, as well as plenty of engine bling.

Speaking of bling, the Tudor was wearing a mirrored firewall panel as purchased, with mirrored panels underneath, too. Plenty of underbody parts, like the diff, brake calipers (discs all round) and fasteners had been painted in the same rich apple green as the body. It’s this attention to detail underneath that point to this Tudor’s suspected origins as a show car. 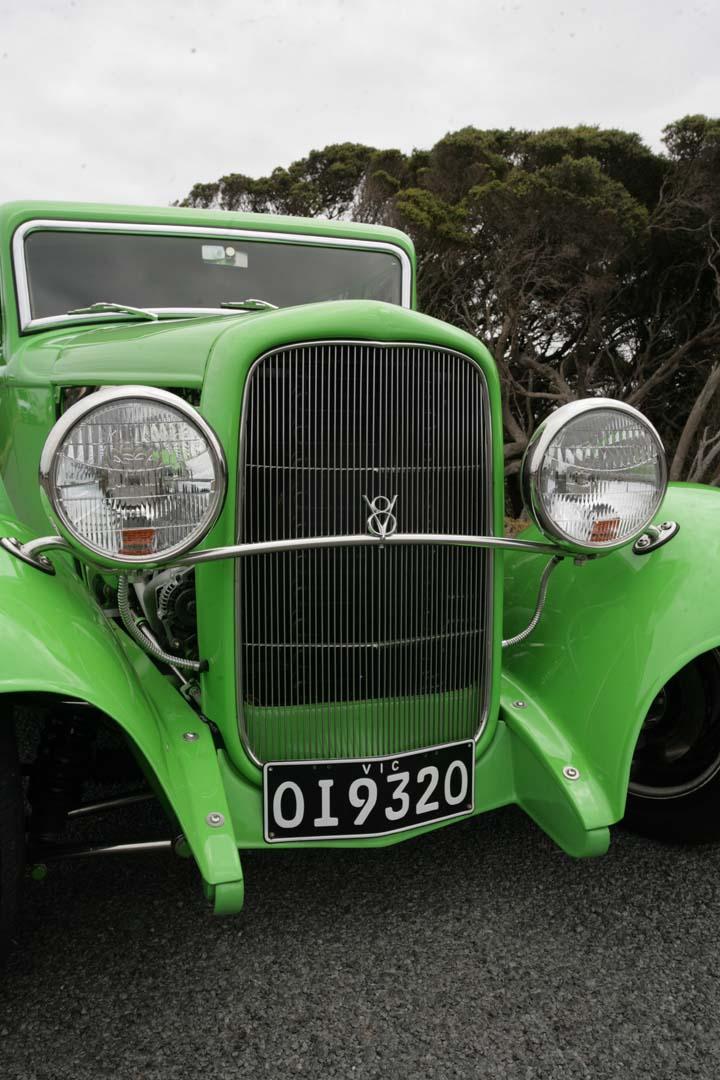 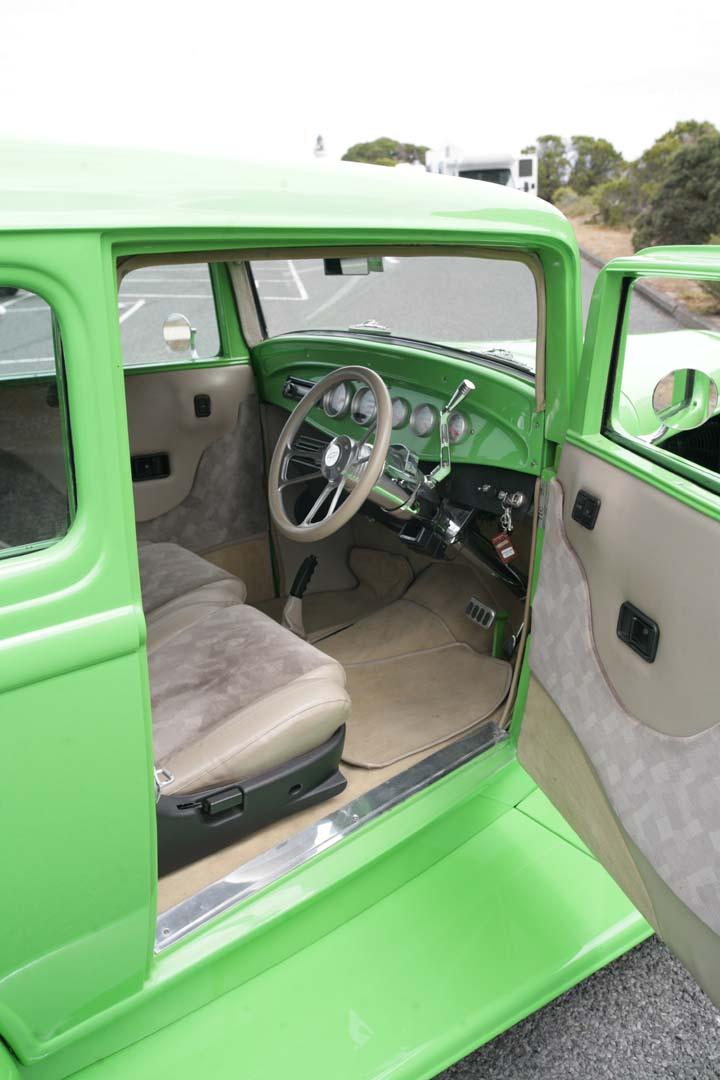 Tony continued this trend, taking it to numerous rod and general car shows throughout Victoria and even interstate, picking up a heap of trophies in the process.

Tony also fabricated a trailer to suit, which could be towed thanks to a towbar mount that’s believed to have been incorporated into the chassis when this rod was first built.

In 2014, Tony gave the Tudor a bit of a makeover, primarily for a family wedding, but also to make it a little more ‘cruise-friendly’. The supercharger was removed and a standard Edelbrock inlet manifold and 600 Holley put in its place. A 3000rpm hi stall torque converter for the Turbo 350 was fitted in place of the previous 3500 converter, with the 3.00 ratio replaced with a 3.70 ratio for the LSD.

A GPS was fitted, too, but features like the power windows, Auto Meter gauges and Alpine sound system were unchanged from when it came into Tony’s hands. 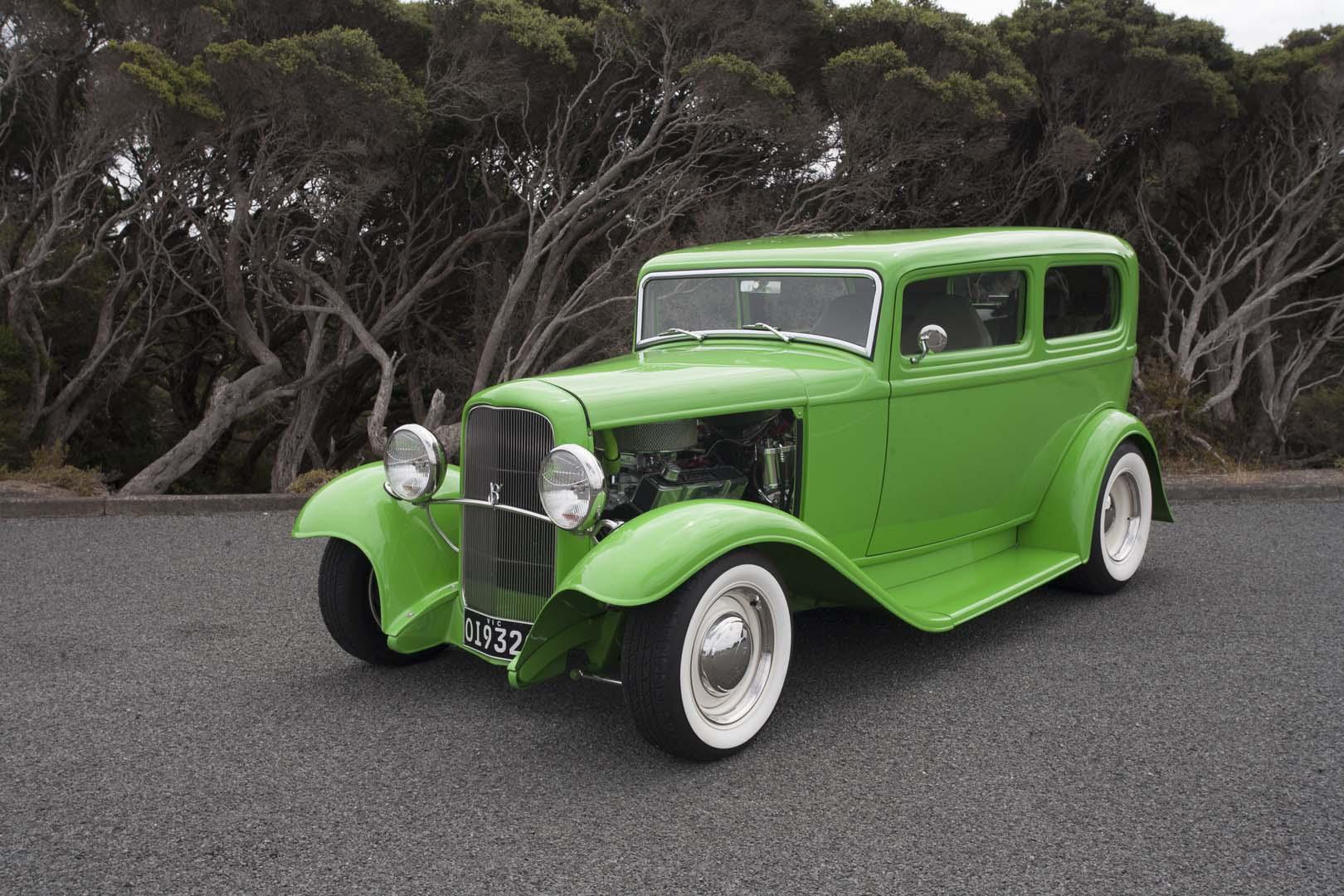 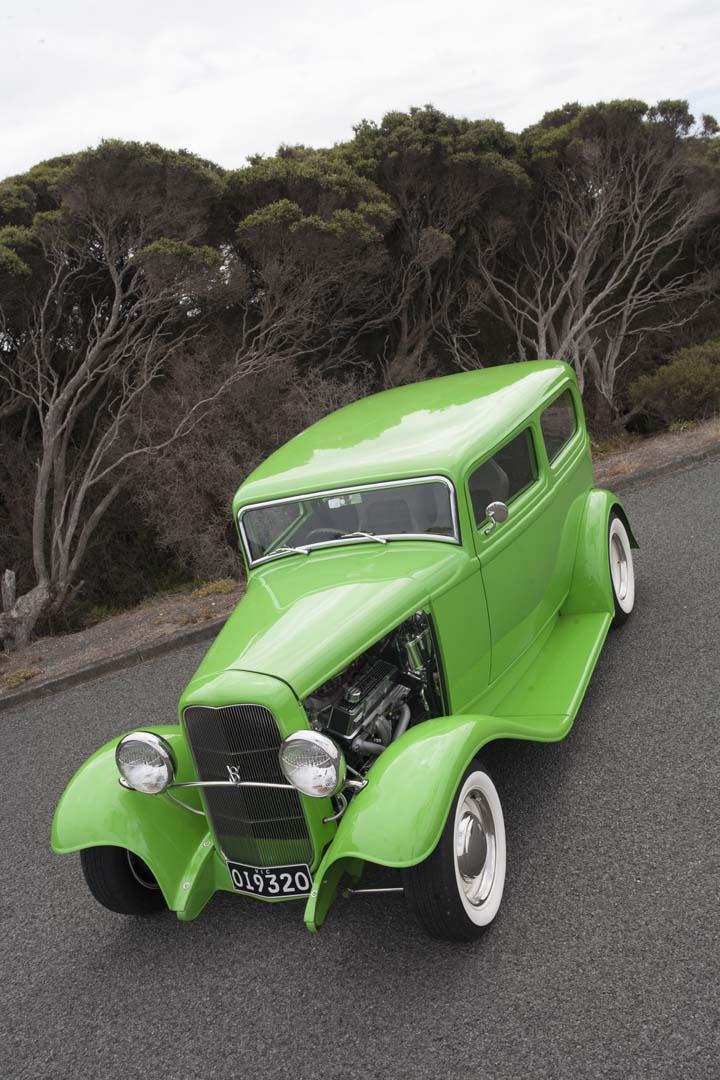 Following that 2014 makeover, Tony continued to show and drive the Tudor regularly. If a medical issue hadn’t forced him to put the car on the market, he said he’s still be driving it today.

That sentiment has been echoed by David, who says the vehicle’s been great fun to cruise in since he bought it in January, 2018, and hasn’t missed a beat mechanically. But new priorities in life means David’s been spending less and less time driving it, so it’s time, he says, for someone else to experience the same fun in this car that he has.

This hot rod has already gone down a number of different paths and we reckon the new owner will not only take it down plenty more, but enjoy every mile doing so. 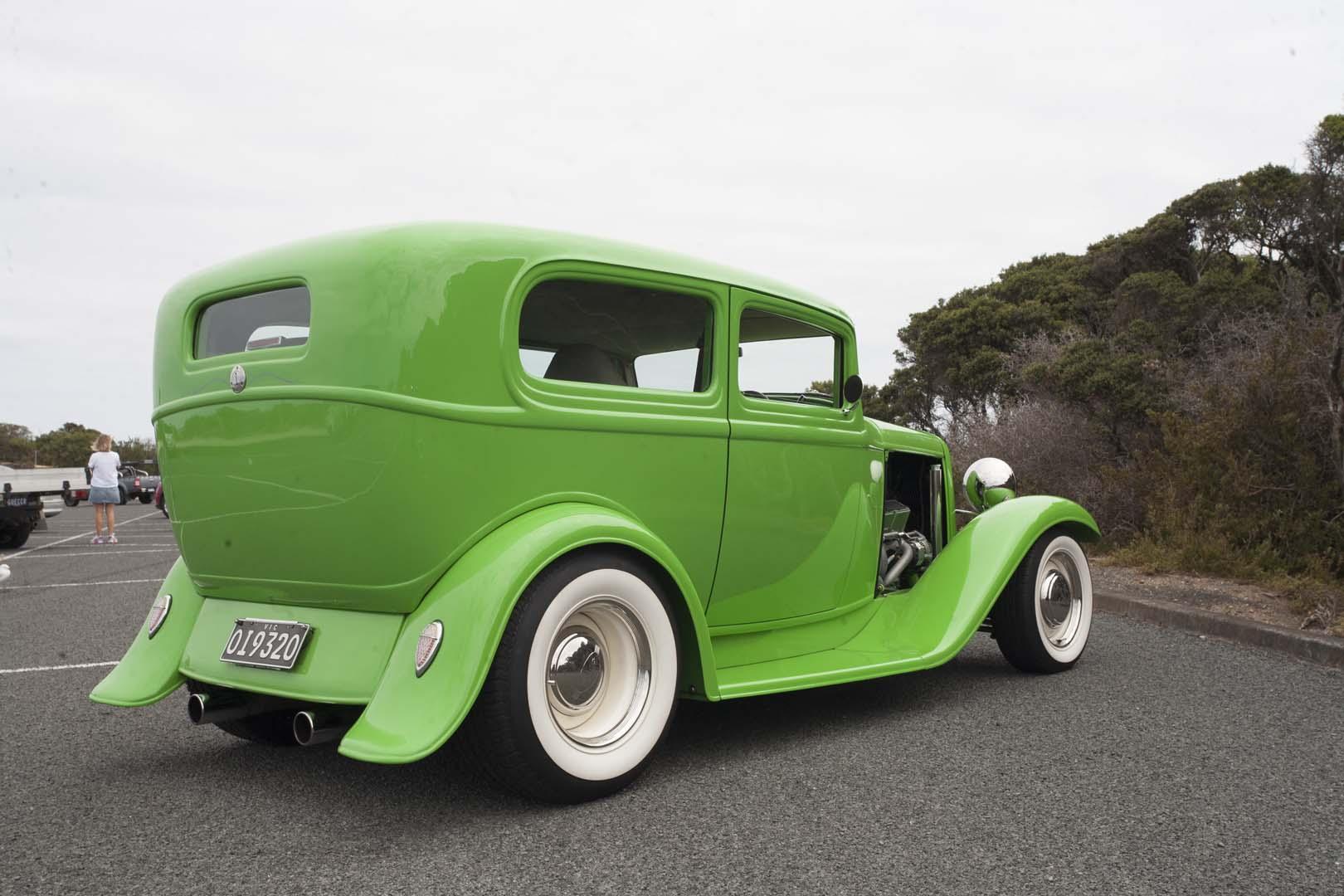 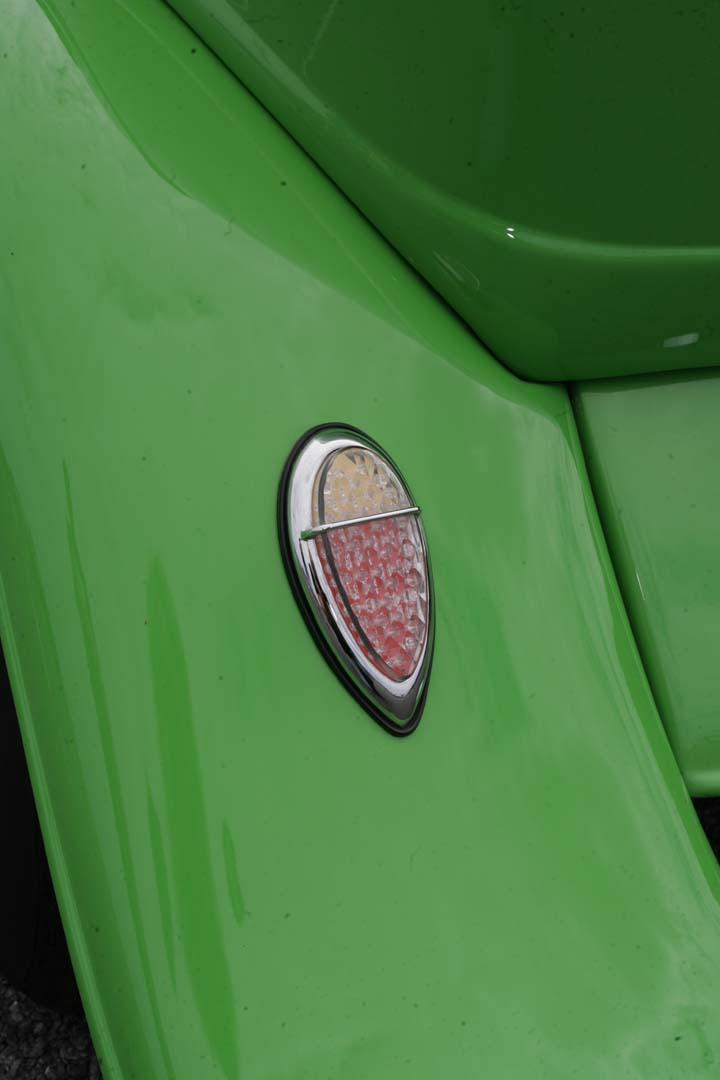 With funds needed to build a new family home, David reluctantly put the Tudor on the market earlier this year.

With the proven 350/350 combination, there’s no worries with reliability and usability, while the quality of Tony’s engine work means the rod’s needed nothing but the usual maintenance common to any vehicle.

All the interior features – air con, power windows, stereo, etc. – are in good order, so there’s really nothing the new owner needs to do except get in and cruise.

Asking price has been reduced to $85,000, with three months registration and the custom ‘019320’ plates included for a Victorian buyer.  View the ad online at justcars.com.au with the ad code JCW5042799.

SOLD SOLD SOLD- This cool ride has since been SOLD using justcars.com.au 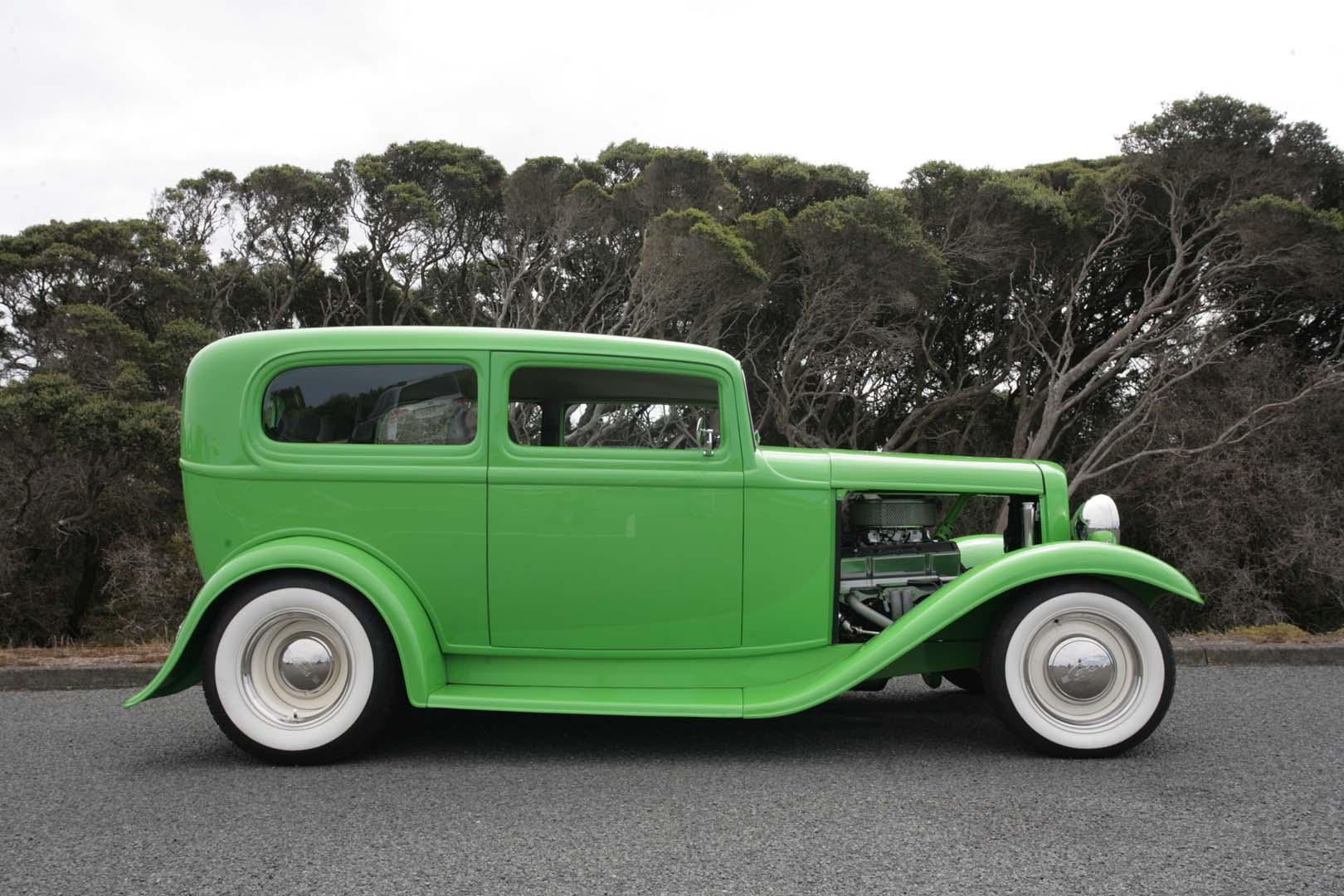 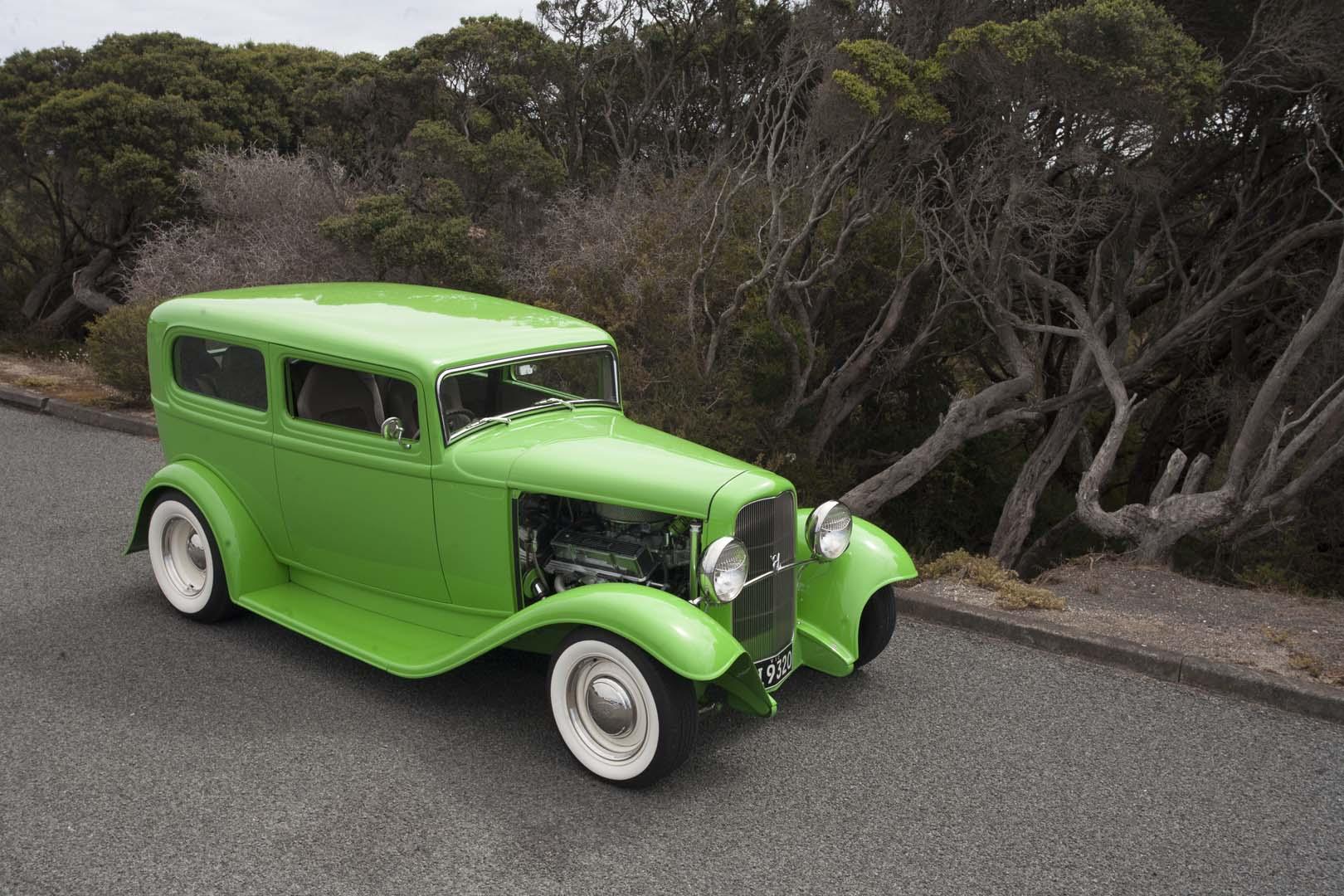