To match its Red Hot exterior, this Holden ute is just as fiery under the bonnet!

The termination of the Holden brand last year was the final nail in a coffin that started with Holden’s local manufacturing operations closing in 2017 and the Commodore nameplate being axed in 2019.

For fans of the brand, it’s been a sad few years, but fortunately, there are people out there keeping Holdens out of the tip and away from the car crusher. People like Peter Stonebridge.

From Sedan to Ute

This is the second of Peter’s Holdens to be featured with JUST CARS, following the Cambridge Blue and Teal Blue 1958 FC sedan we presented in 2017.

As good as that car was, this custom 1964 EH ute is arguably more deserving of a feature, not just for its good looks, but also its custom features and the fact that so much time, effort and attention to detail has gone into it.

Born from Peter’s simple dream to have a hot EH in his garage, making that dream a reality proved to be a fair bit more complicated. And while this ute looks only mildly modified - with its Red Hot paint, lowered stance and aftermarket alloys - there’s more going on when you dig a bit deeper.

Peter started this project in late 2002 with the shed find of a solid EH ute rolling shell. Acquired through a collector in NSW - a bloke Peter has known for a long time and from whom he’s bought parts for various cars in the past - the shell had not done any heavy work and only needed a set of floor pans.

This was followed by the purchase of front end panels, engine parts, brakes, suspension, electrical and interior parts.

As Peter is a panel beater and spray painter with more than four decades’ experience in the trade, the project was less daunting for him than it would have been for the average Joe.

Peter said the build was far from easy, but not impossible when it’s your passion and you enjoy creating something unique.

Getting the body straight and rust-free took up a large portion of the three years Peter spent on this project, fitting it in around full-time work.

“It was a major rebuild – and the body is the thing that takes all the time,” Peter explained.

While the ute body came with doors and a tailgate, new skins for all three were required. But before the door skins went on, Peter used his own special brew – a mixture of Castrol’s Tectyl oil and fish oil – as a rust preventative before painting.

Peter had to source front guards and a bonnet, but even these needed work, requiring patch panels that Peter stitched in with the finesse you’d expect from an experienced panel beater.

Many, many months later, with all the bodywork done, the ute was ready for paint and Peter’s initial plan was to paint it black, like his Commodore V6 custom FJ. But after a couple of base coats were laid down, he changed course.

“I found the Holden ‘Red Hot’ colour and decided I’d paint the ute in that instead,” Peter said. “I’m happy I did, actually, because the red looks a lot better.” 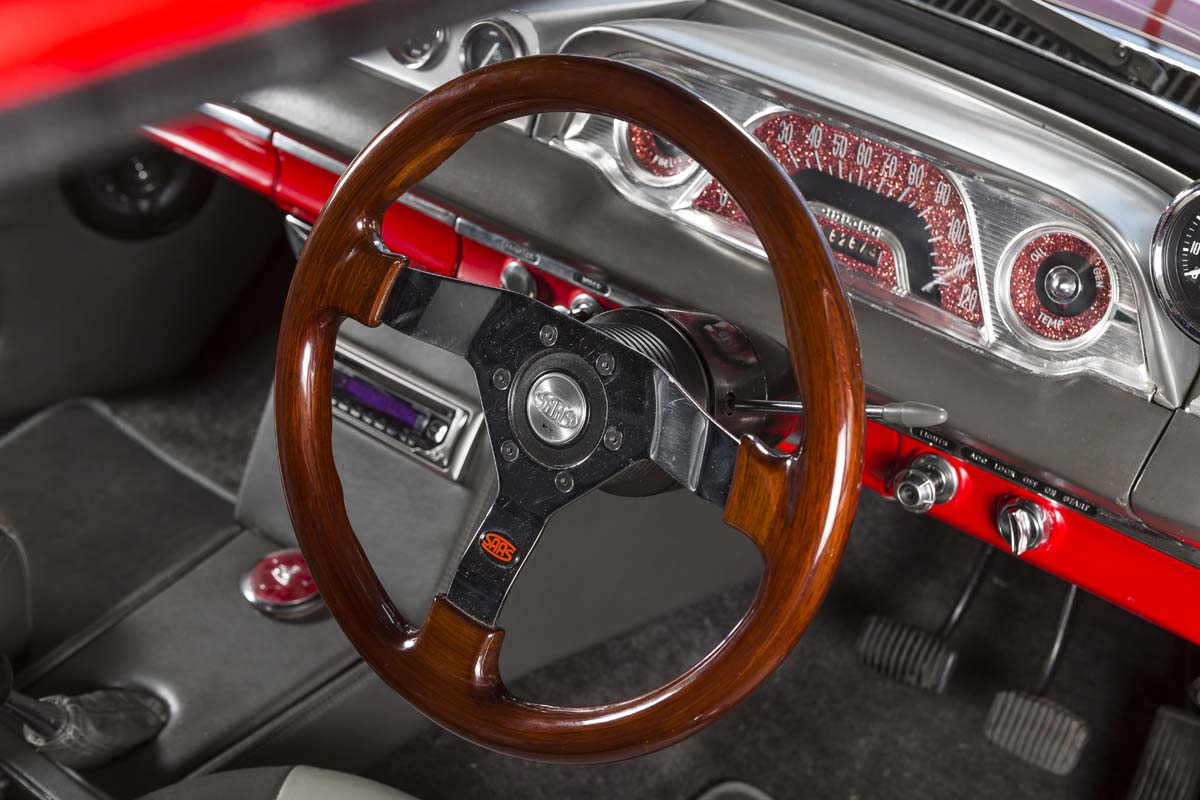 Re-chroming of the bumpers and other exterior parts was done as required, while for the ute tub’s new floor, Peter chose wood panelling normally used for load area flooring. With tongue-and-groove joins already milled in, this made for an easier, tighter fit.

Remember when Peter Brock was spruiking Fair Dinkum Sheds? Peter does, because thanks to his wife Sandra (who worked for Fair Dinkum Sheds), he got to meet the great man when a new TV ad for the company was being filmed back in 2005-06.

“I spent three days with Brocky – and all we talked about was EHs and Toranas!” Peter laughed.

The ad featured a Torana, mocked up to look like Brock’s LJ Torana XU-1 from the 1972 Hardie-Ferodo 500, which prompted a lot of recollections between the two. Having owned five XU-1s himself, including the very car that Bill Brown crashed in the same ’72 Bathurst that Brock won, Peter was able to hold his own with Brocky in that conversation!

Even before the Brock meeting, Peter had decided to bring XU-1 levels of performance to the ute, building it up like the hot EHs he first encountered back in the 1960s.

Given he’s been hotting up Holden Grey and Red motors since his teenage years, Peter knew exactly what was required to build a hot six for the project, but finding a good 202ci (3.3-litre) engine as a base proved problematic.

Three engines, sourced through wrecking yards, were rejected by Peter’s engine rebuilder mate before a good example was found. This was bored 60 thou over and fitted with stronger pistons that had originally been developed for the HQ Racing series. Further updates included a lumpy cam from Camtech, a lightened flywheel, Yella Terra head, Redline intake manifold, triple 1 3/4-inch SU carbs, extractors, a 2 1/2-inch exhaust system and VH Commodore electronic distributor.

To enhance the usability of the XU-1-spec engine, a Celica 5-speed gearbox and Dellow conversion kit was bolted in, while a ‘banjo’ LSD with a 3.36 ratio completed the driveline.

So how does this spicier six compare to a standard Holden Red Motor? “You can’t compare them, really,” Peter explained. “This one really does go well.”

The ute’s front drum brakes were initially upgraded to HR discs, then LH Torana (which offer a bigger disc and better caliper), but EH-spec drums were retained at the rear.

In terms of suspension, Peter fitted an HR front end with a rear-mounted steering rack, which is a common upgrade for older Holdens like this, while the factory EH leaf spring rear set-up was retained. Pedders springs were fitted up front, while the rear springs were sent to Liverpool Springs P/L in Moorebank to be reset and straightened. Overall, the suspension has been dropped by 2 1/2 inches at the front and 2 inches at the rear, but Peter says ride and handling are still good.

When it came to fitting out the cabin, a VH Commodore was stripped of its bucket seats and these were reupholstered in leather by Xtrim Motor Trimming in Smeaton Grange. Xtrim also made the tonneau cover, door cards and centre console that carries the 5-speed’s shifter, handbrake and the head unit for a Kenwood sound system that Peter fitted.

After fitting a full rubber kit, laminated tinted windscreen and tinted windows, Peter added a washer function to the wipers that these utes never had when new.

Further custom touches inside include a Saas wood-rimmed steering wheel, dash-mounted Smiths tacho and a trio of auxiliary gauges that sit in a ’60s-era aftermarket accessory pod, but the highlight of the interior, at least in this writer’s view, is the metalflake finish behind the main instrument gauges that adds a nice touch of ‘kustom kool’ to this project.

“A guy down in Victoria does them,” Peter explained. “You send him your instrument panel and he paints it in any metalflake colour you like.”

With the leather and full carpeting, the cabin is a major step up from a stock EH ute’s interior, which was Peter’s intention from the outset.

“This ute has got everything in the cabin that a Premier would have had.”

Camtech to Crow. . . and to Market

Following completion of the ute’s rebuild in 2006, Peter spent years enjoying it in his home town of Camden in NSW. And when he and Sandra relocated to Gerringong (around 40km south of Wollongong) on the NSW South Coast, the EH came with them, as did the custom FJ.

In early 2017, Peter bought the ’58 FC sedan previously featured with JUST CARS, but even before that car was bought and this EH ute was built, Peter was hankering for an EH Premier.

Good, affordable EH Prems have become as rare as hen’s teeth in recent years, so Peter was lucky to get hold of one in late 2017, then spent all of 2018 restoring and upgrading it.

Following the move south, the shorter trips and more suburban driving that Peter was now doing made the lumpier cam in the ute impractical, so a milder profile Crow Cam was fitted three years ago.

A thermo fan was added to the factory radiator at the same time, while a new master cylinder, brake booster and clutch slave cylinder were put in last year.

Whether at car shows, or just out and about, Peter says his ute never fails to get attention, but he has to give the EH Premier and FJ some love, too, which has prompted a recent – and reluctant – decision to sell the ute (see breakout).

As a cruiser in its current configuration, something to upgrade to show car spec or the basis for further customisation inspired what Peter’s already done, this ute could be taken in a number of different directions by its next owner. But in the “post-Holden” era, ensuring that it’s taken out at all – keeping a Holden in view and in use - is the main thing. 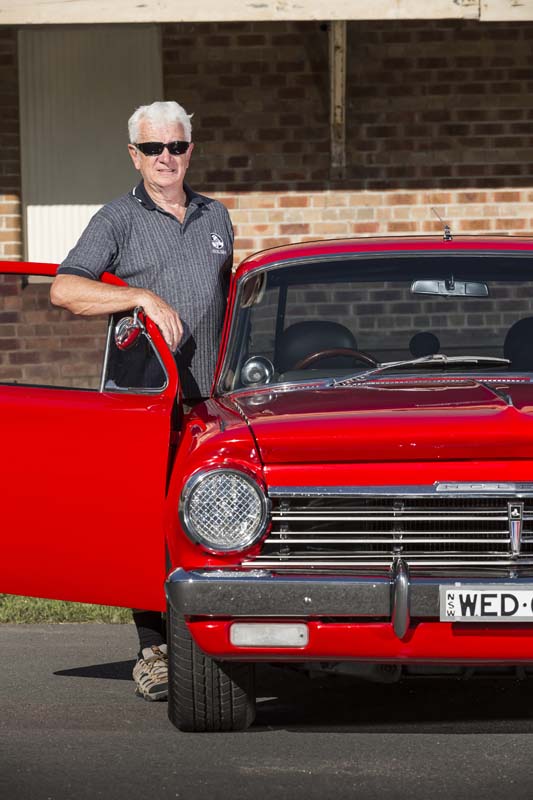 It’s not often that any EH ute comes on the market these days, let alone a hotted-up example of this quality.

With its powerful engine, 5-speed ‘box, LSD and disc brake front end, this ute can easily handle the highway, while the Commodore bucket seats make for a comfortable drive, no matter what road you’re on! The milder cam makes the ute more docile for city and suburban driving, while the thermo fan makes it run cooler, too.

Since these professional photos were taken, the 14-inch Dragway 5-spoke rims have been replaced with Dragway Draglites, but this is the only cosmetic change.