The first convertible C-V8 built by Jensen was also the last.

Jensen’s C-V8 has occupied a curious place in the company’s history. Even upon its debut, the luxury GT 2+2 was considered unusual, and when the Interceptor replaced it, it was all but forgotten.

It was by no means unsuccessful, though, with just shy of 500 units produced across five years. Granted, it’s not a huge total, but it exceeded every other Jensen-badged automobile built to that point in time.

The C-V8 arrived in 1962 as a development of the 541 that Jensen had released eight years earlier. Seen alongside that model, the C-V8’s lineage is clear, but Jensen undertook several styling changes, most notably at the front end. 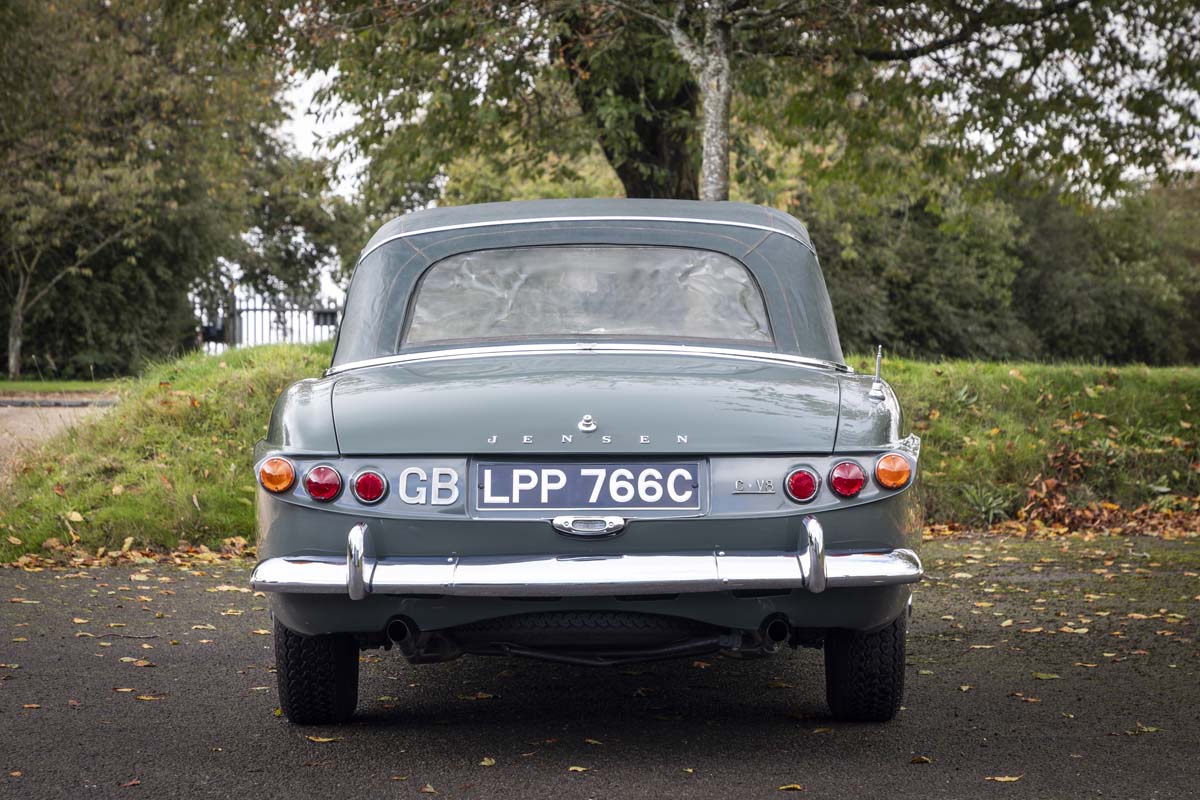 Back when the C-V8 was new, the ‘Chinese Eye’ headlamp treatment was its most distinctive visual feature, but it wasn’t an element that Jensen had invented. The more politically correct term is ‘canted headlights’ and refers to quad headlights arranged diagonally. The styling feature had been pioneered by Lincoln in the late 1950s, with Buick, DeSoto, Dodge and Chrysler following, but American automakers had abandoned it by the early 1960s – about the same time European manufacturers were picking it up.

Perhaps the best-known British cars with this headlamp treatment were the Bentley S3 Continental and Triumph Vitesse, closely followed by the C-V8, but Ferrari sported them, too, albeit to a less extreme degree on their 330 GT.

Jensen’s adoption of the styling trend was part of a makeover of the 541 that included adjusting the fastback rear to a more sedan-like shape with a proper bootlid, but other styling features, like the bonnet scoop and distinctive blisters over the wheelarches, remained. The C-V8 also followed the 541 in using a sturdy tube steel frame with a fibreglass body and aluminium doors.

More important than the C-V8’s appearance was its power, and as the model name suggests, that power came from a V8; specifically a 360ci (5.9lt) Chrysler unit that was paired in most instances with a Chrysler Torqueflite three-speed automatic.

Maximum power of around 300hp (223kW) was more than double what was on offer from the BMC inline six engines that had powered Jensen’s previous models, while offering significantly more torque, too. 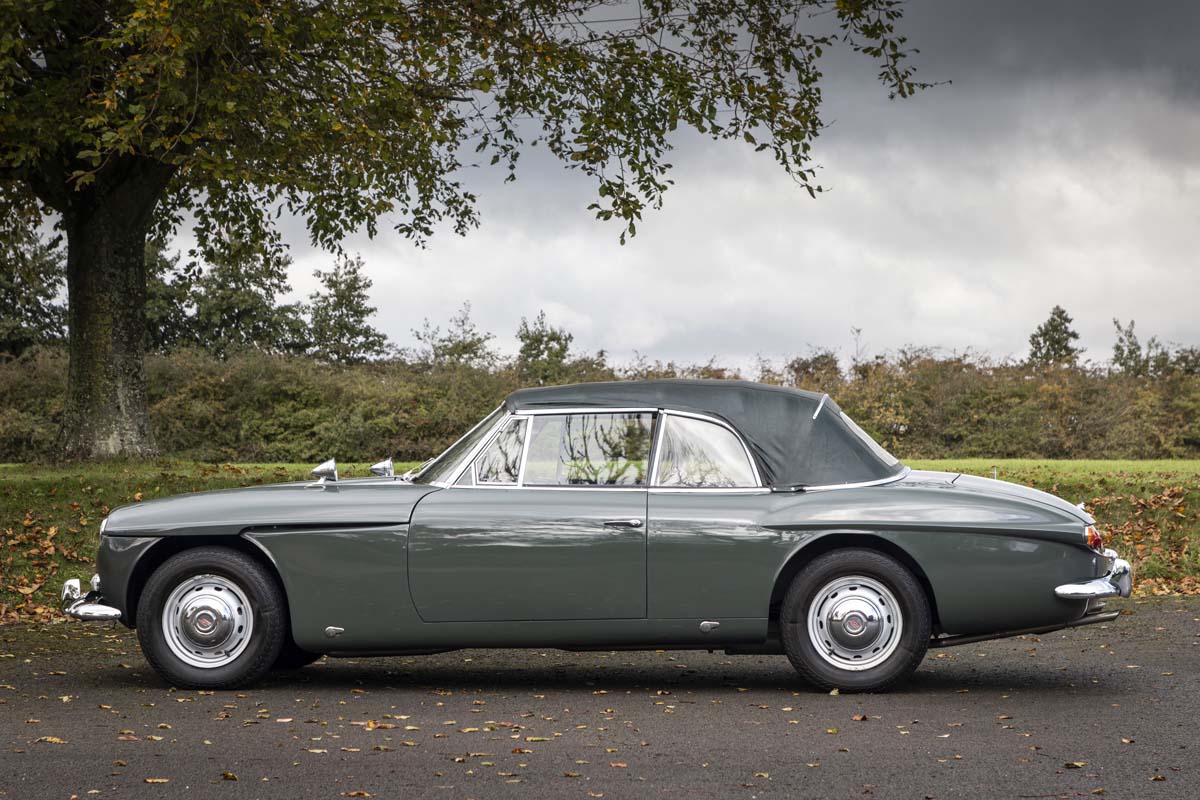 While not in the same sports car league as a Jaguar E-Type or Aston Martin DB4, the C-V8 was still wickedly quick, with 0-100km/h acceleration under nine seconds and a top speed in excess of 200km/h, making it one of Britain’s fastest 2+2 GTs from the early 1960s. A Bristol 407 would be the C-V8’s closest match; which is unsurprising as it also ran a Chrysler V8.

The mixed reception to the C-V8 and its “challenging” front end styling was the least of Jensen’s problems in the early 1960s. Founders Alan and Richard Jensen had already ceded control of the business to a holding company, Norcros Group, in 1959, while contract work that had been the bedrock of the business was starting to dry up.

In 1963, Jensen lost the contract to build bodies for Volvo’s P1800 after a few hundred units has been built, while the relationship with BMC, that had seen Jensen produce bodies for the Austin A40 Sports convertible and ‘Big Healey’ Austin-Healeys was starting to look shaky, too.

These uncertainties with outside work led the Jensen brothers to look inward and try and grow their own range, so the four-wheel drive C-V8 FF and P66 prototypes were developed, along with a C-V8 convertible. Jensen’s dealer network was pushing for new products and model variants like a convertible, too. 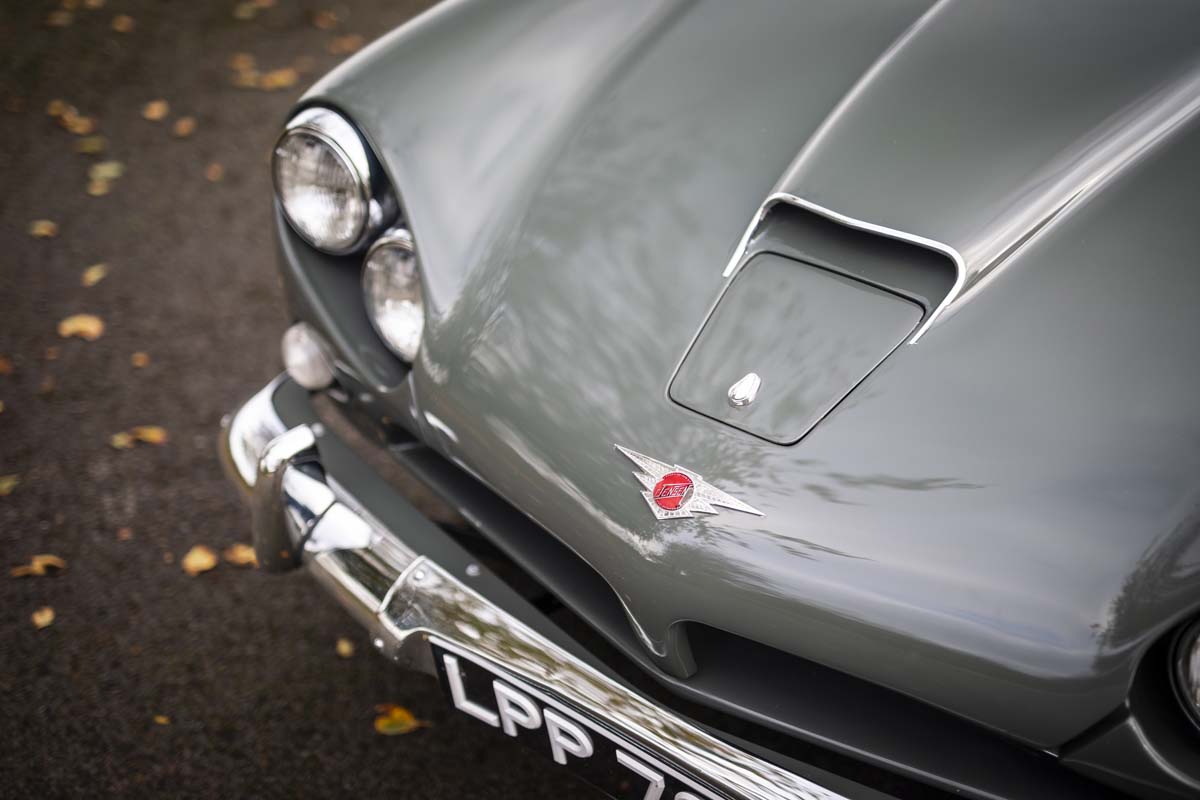 Convertibles weren’t foreign to Jensen, but they hadn’t offered a model with a fold-down top since the last of the original Interceptors back in 1957. That meant there was some work to be done to make a roofless C-V8 – and make it work.

The company’s chief engineer and designer, Eric Neale, applied himself to the task, starting in mid-1964 with an experimental C-V8 chassis – JM/EXP/108 - that was nine inches longer than standard. This, it was envisioned, would allow the hood to stow neatly without impacting rear seat legroom, luggage space or rear vision.

Making the convertible work with existing C-V8 componentry proved easier said than done, so the project was parked for months before recommencing at the start of 1965, with input from the dealer network on the car’s appearance. 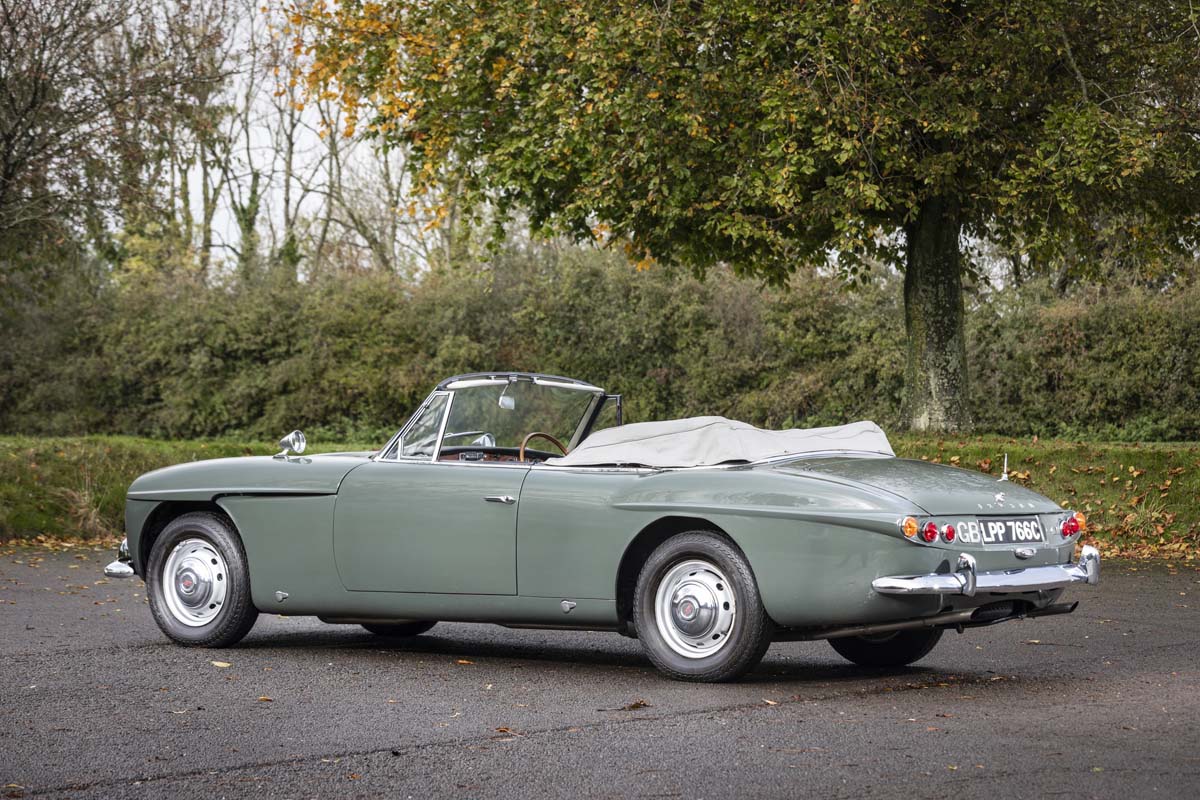 Upon completion, the convertible prototype was sold to Jensen’s major London dealer, Charles Follett, in May, 1965, and passed into the hands of its first private owner two months later.

While the drop-top C-V8 looked good (for a C-V8!), it hadn’t been fully developed or tested before it went to Charles Follett, and that became apparent the day the first owner picked it up. 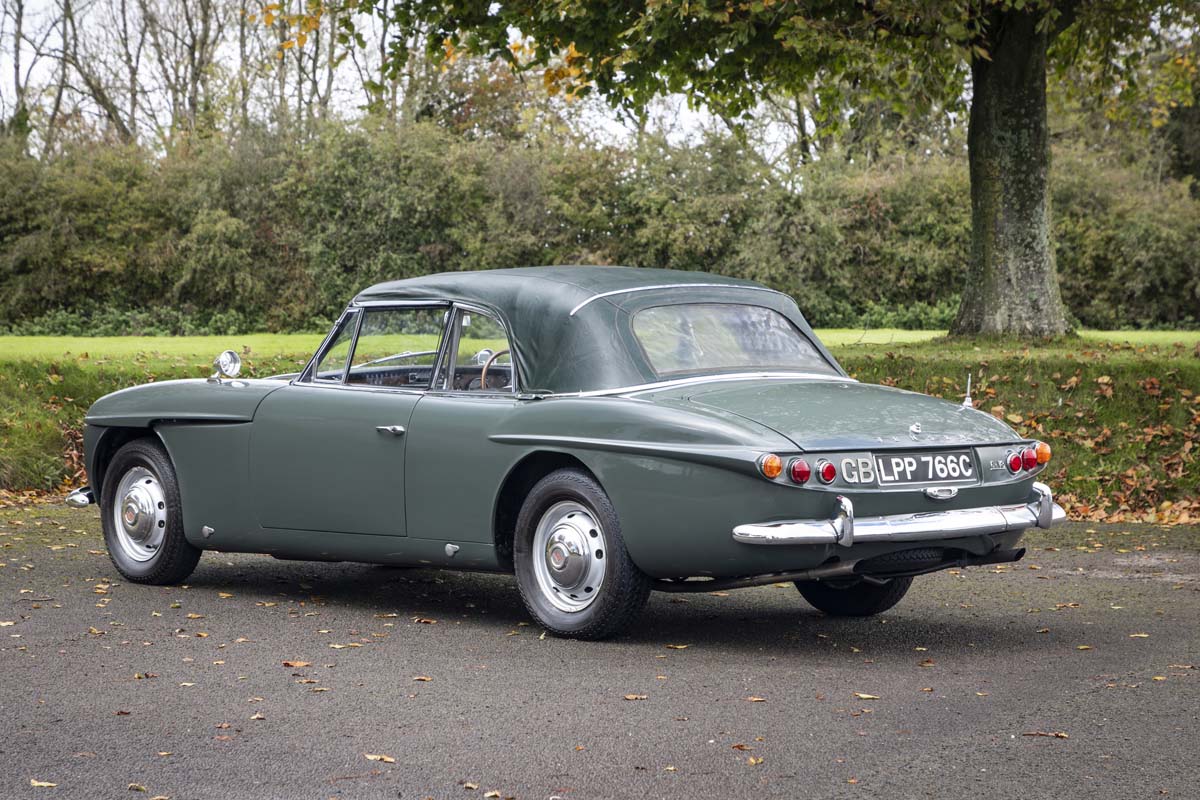 Lord Carrington came from a long line of mid-level English nobility, but there are Australian connections peppered throughout this lineage. For example, Peter’s uncle and 3rd Baron was a former Governor of New South Wales, while Peter’s father, the 5th Baron, was born in Australia. Peter himself would serve as Britain’s High Commissioner to Australia in the late 1950s.

After an education at Eton and Sandhurst, Peter assumed his hereditary ‘Lord’ title in 1938 following the passing of his father and took his seat in the House of Lords.

His time in office was short-lived, though, as the outbreak of World War II saw him leave parliament to serve with the Grenadier Guards, seeing much action and decorated with the Military Cross for gallantry late in 1945. 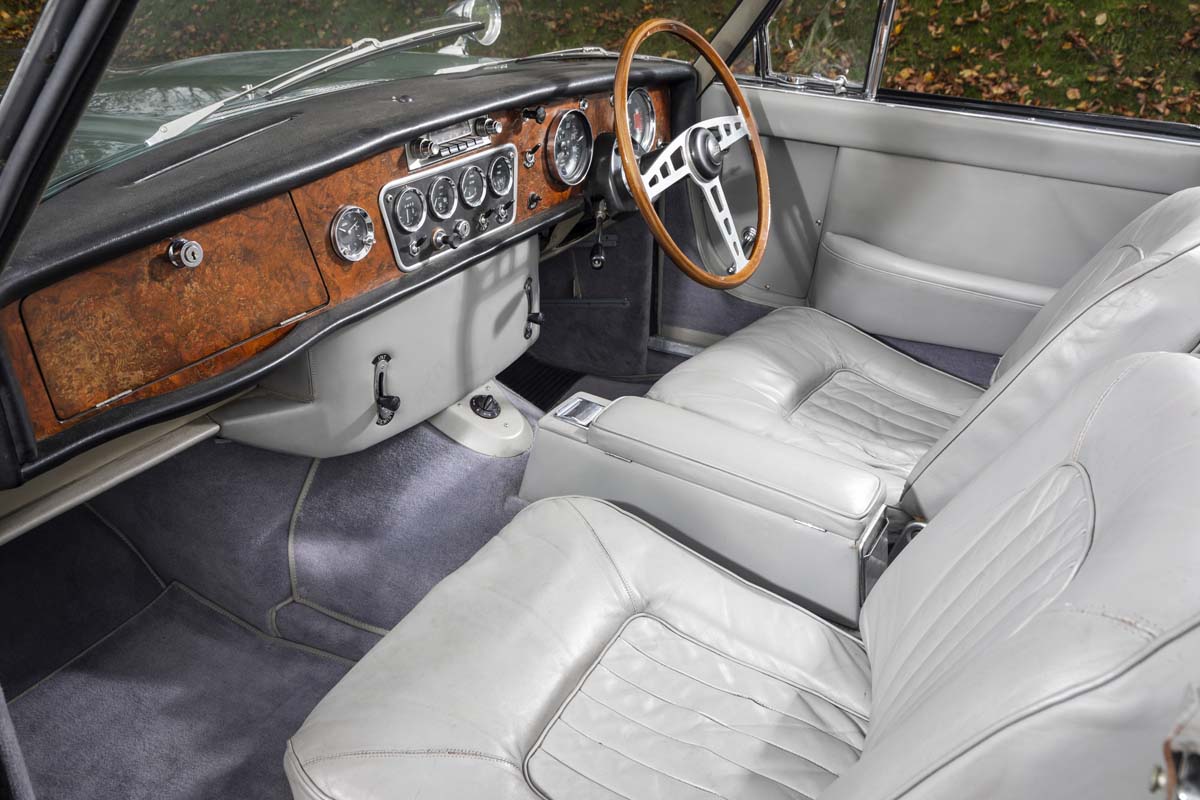 Restarting his political career after the war, Lord Carrington would serve numerous roles in government and opposition, including Defence Secretary, Foreign Secretary and First Lord of the Admiralty. He would ultimately become the longest serving member of the House of Lords.

None of this explains his attraction to Jensens, though, but attracted the Lord was and he would own a total of six over his lifetime, including the C-V8 convertible featured. 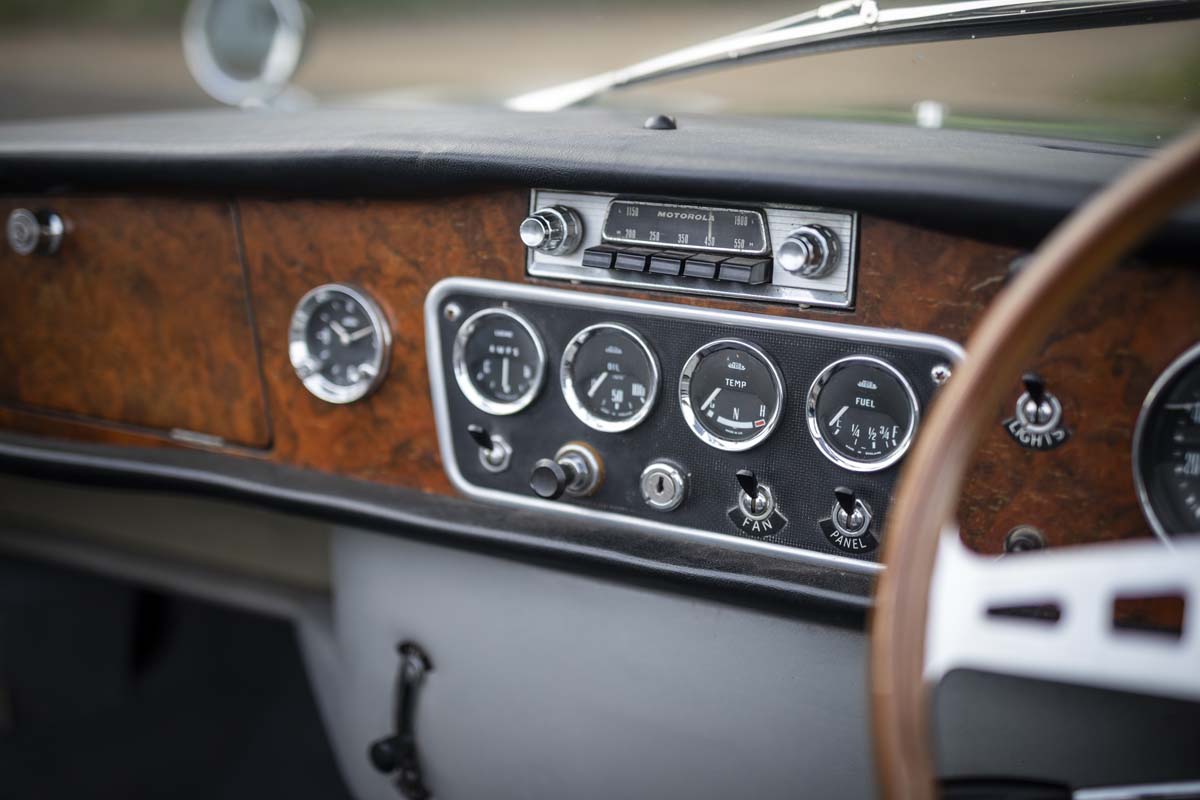 Already an established customer of Charles Follett, Lord Carrington purchased the Smoke Green with Grey leather trim convertible in 1965, and legend has it he picked the car up in a thunderstorm, where problems with the hood became immediately apparent.

Depending on which account you read – of both the car and the man – the leaking top was either a trickle or a deluge, with Lord Carrington’s reaction either mild annoyance or outright indignation. Either way, the leaking hood was a reality and Carrington was rightly annoyed that his brand new car was giving him a shower.

This was just the start, though, with Lord Carrington identifying several other problems – from a drafty hood when it wasn’t raining, to a non-functional window winder, over-firm rear suspension, substandard paint and poor radio reception. The list was long enough for the car to go back to the Jensen works for a thorough assessment. 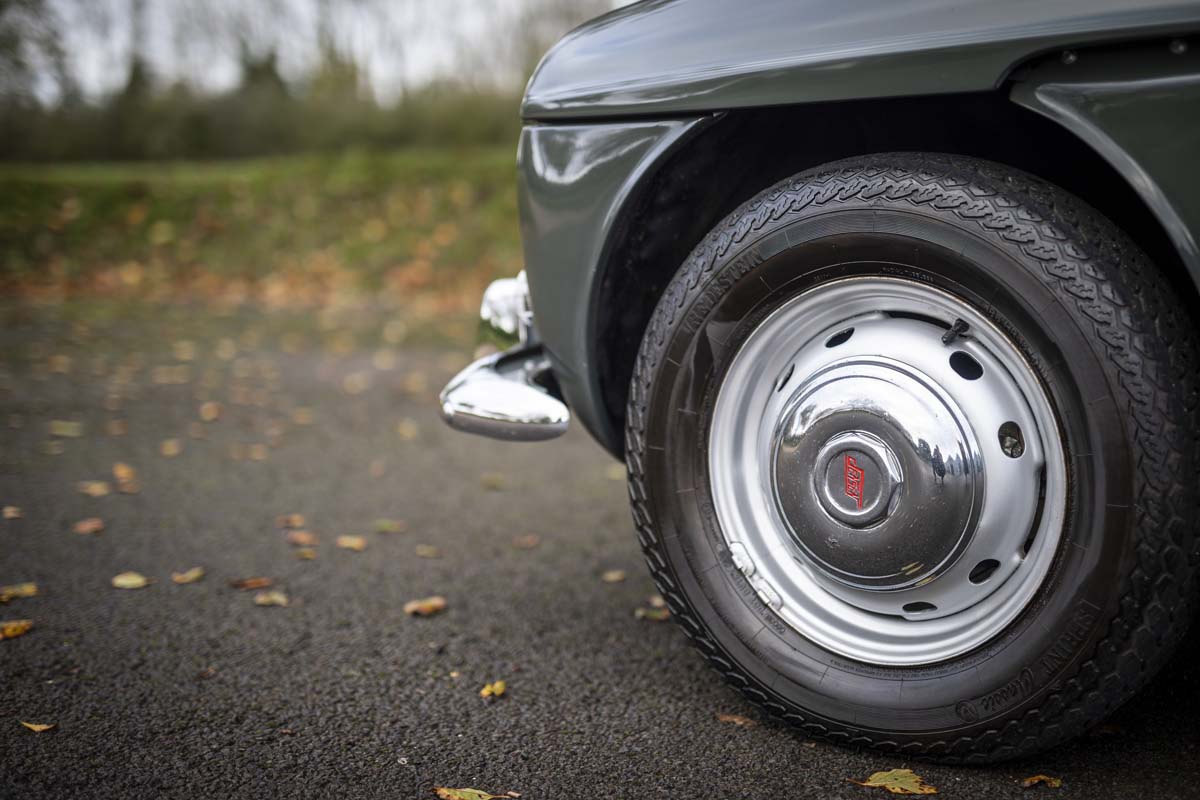 Stiffening the body and making the hood wind and waterproof were the priorities and Jensen apparently achieved this.

Lord Carrington remained unsatisfied, though, insisting the hood was still not watertight and demanding the car be repainted, a walnut dash fitted and the dual-circuit braking from the C-V8 MkIII be installed – all free of charge.

Being a regular customer and peer of the realm, Jensen were loathe to deny Lord Carrington, so most of his demands were met, but they were no doubt relieved when Lord Carrington returned the car to Charles Follet as a part trade on a new Interceptor early in 1967.

As disappointed as he appeared to be with the C-V8 convertible, Lord Carrington nevertheless covered over 21,000 miles (33,800kms) in the car before trading it in. The next owner would be far less fussy. 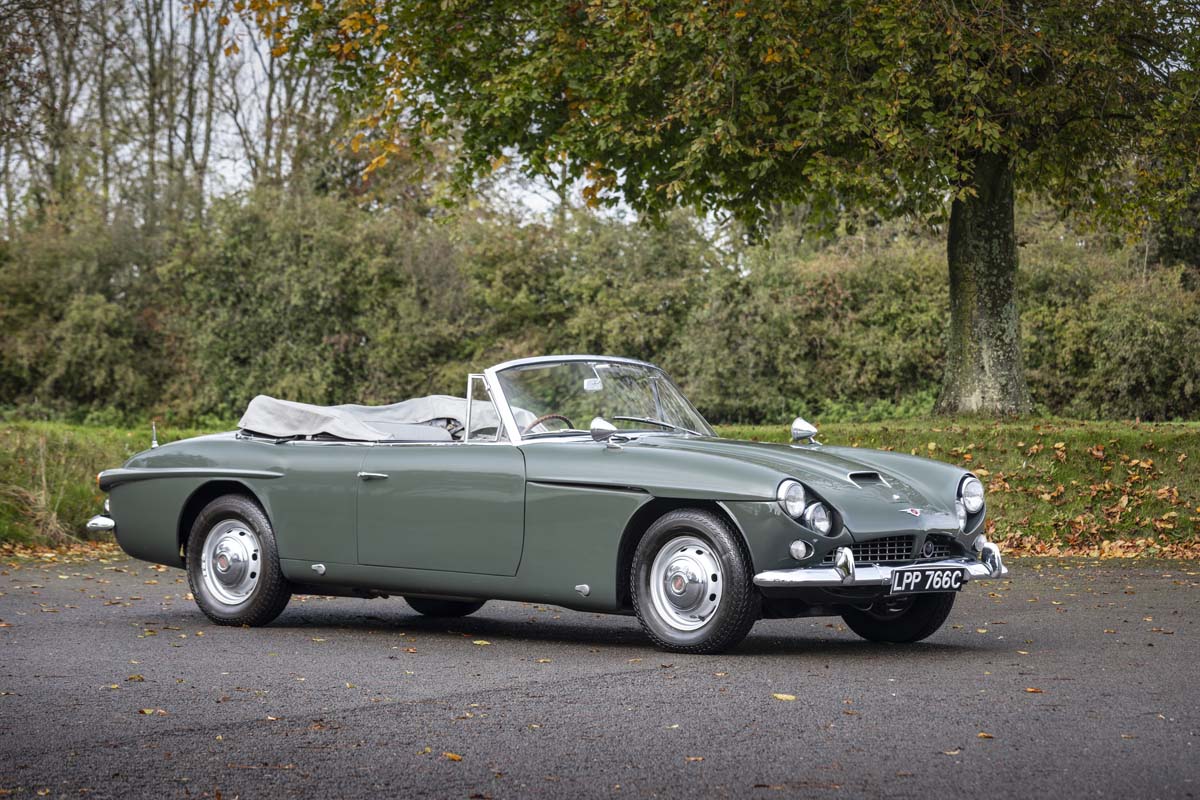 The C-V8 convertible’s second owner did send the car back to Jensen for regular maintenance and routine servicing, but seemed content with it, making none of the demands for new and better componentry that Lord Carrington did.

Used regularly until 1973, the car spent much less time on the road thereafter before it was passed on to the second owner’s son-in-law in 1987. He kept it until 2017, after which it was resprayed and given a mild refurbishment before appearing on the consignment list of a UK-based classic car dealer. Last October, it went to auction with RM Sothebys for their online-only London sale.

Being a one-off made the C-V8 convertible interesting, but also hard to value. As such, RM Sothebys would only provide an estimate on request.

While in fine condition mechanically, the convertible showed signs that repair was required in other areas, especially the interior. It is perhaps for this reason that the Jensen failed to sell at the 26-31 October auction, part of a disappointing result overall for RM Sothebys in their first online only auction based in London.

While failing to find a new owner then, the unique status of the 1965 Jensen C-V8 convertible, combined with a small but devoted corps of Jensen enthusiasts around the world, should see this vehicle find a new home in the near future.