A British racing legend turned to a legendary American car for a run in the first edition of a legendary Aussie event.

Despite not winning a Formula 1 World Drivers’ Championship, the late Sir Stirling Moss remains one of the greatest drivers of all time. Moss was also one of the most versatile, succeeding in open wheelers, tin tops and rally cars across a diverse career that officially ended in 1962, but would continue for decades afterward. 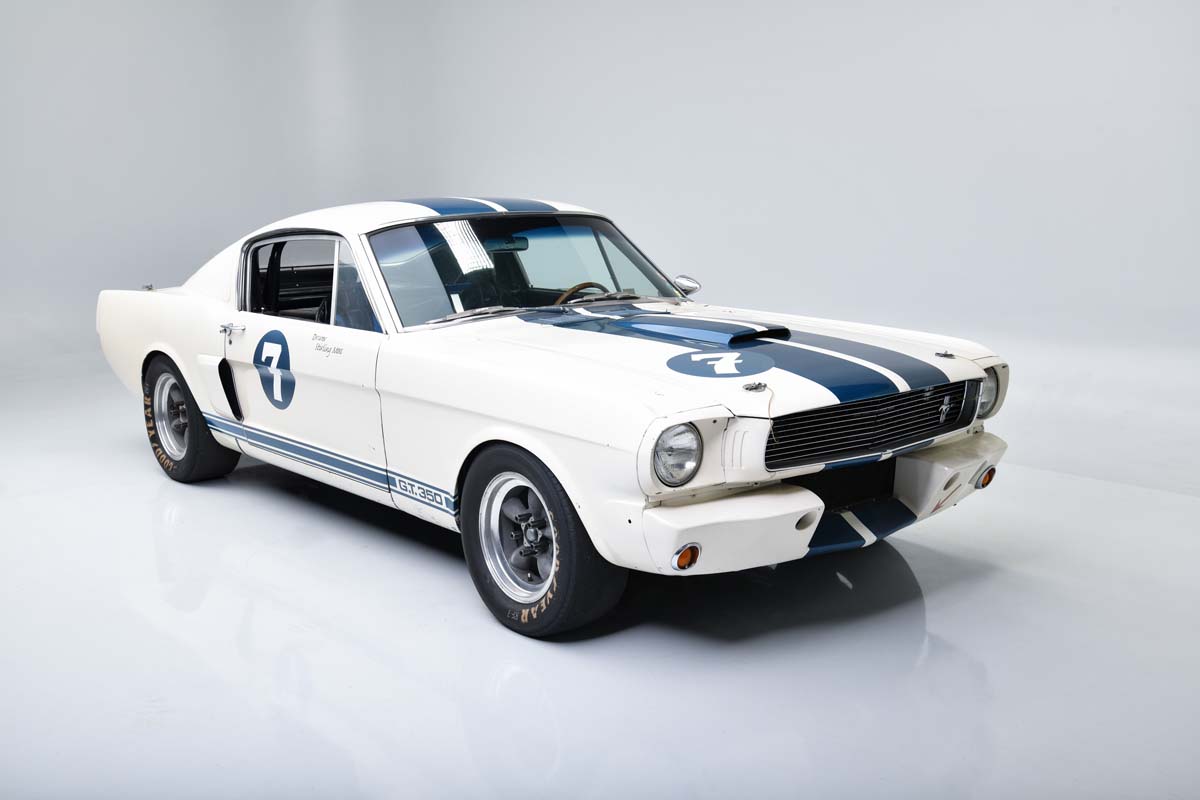 At the start of the 1990s, Moss had been officially retired from competition for close to three decades, but he certainly hadn’t stopped racing.

First lured out of retirement for an ill-fated start at the 1976 Hardie-Ferodo 1000 at Bathurst (partnering Jack Brabham, no less), Moss then raced in the British Saloon Car Championship for two years at the start of the 1980s. Various one-off drives followed, mainly in historic events, either in his own OSCA FS 372 sportscar or driving other vehicles at the owner’s invitation.

One of those guest drives included a start in the Monterey Historics at Laguna Seca, behind the wheel of a Shelby Mustang GT 350. That made such an impression on Moss that he sought out a GT 350 of his own. This led Moss, allegedly with assistance from Carroll Shelby himself, to a unit in the possession of fellow historic racer (and part-owner of Aston Martin at the time), Peter Livanos.

While in Livanos’s ownership, the 1966 GT 350 had been converted to GT 350 R spec by specialist Chris Liebenberg, which meant it carried more competition-focussed componentry compared to the GT 350 road car, making it ideal for Moss’s historic racing needs.

Being in less-than-ideal condition when Moss bought it, the car was subjected to a restoration that reportedly lasted two years. The refurbished car’s first competitive outing would be in Australia.

At around the same time that Moss was having his Mustang rebuilt, a group of enthusiasts, led by CAMS President John Large, was developing the concept of a major tarmac rally for Australia. This was part of a broader Five Year Plan by CAMS to have a hallmark motorsport event in every Australian state and territory.

With its amazing roads and stunning scenery, Large thought that Tasmania would be ideal for a multi-day rally in the style of the Targa Florio and Mille Miglia. First posited midway through 1991, it didn’t take long for “Targa Tasmania” to gain momentum, with the event locked in for April, 1992.

How much convincing Moss needed to take part in Targa Tasmania is unknown, but presumably not much, as he was invested enough to bring out his newly-rebuilt Mustang while his contemporaries would race machinery provided for them - Brabham in a Honda NSX, Hulme in a BMW M5 and Clark in a Falcon XR8.

Moss’s participation was meant to be a secret, but that secret was blown when, during a reconnaissance run of the targa course, he was involved in a collision. While Moss escaped mostly unscathed, the occupants of the other car suffered serious injuries.

Undeterred, Moss lined up for the Targa Tasmania start in his Mustang (the accident was in a hire car), with wife Susie as co-driver. Being an older car, the Mustang was unlikely to take the outright victory, but considered a strong chance for a class win within the Classic category.

Over five days and covering around 2,000km across multiple road stages in what were sometimes challenging conditions, Greg Crick won the event in a sister car to Brabham’s NSX, leading home 172 finishers from 196 starters.  Moss finished 20th overall, winning his class ahead of a Torana and Aston Martin.

After this first hitout in Moss’s hands, the GT 350 R would be raced by him nine more times at historic events in the USA, UK and Europe. Sold in 1999, the Mustang GT 350 R would continue to be raced by subsequent owners and was still ready for historic competition when it started to appear on the auction circuit. 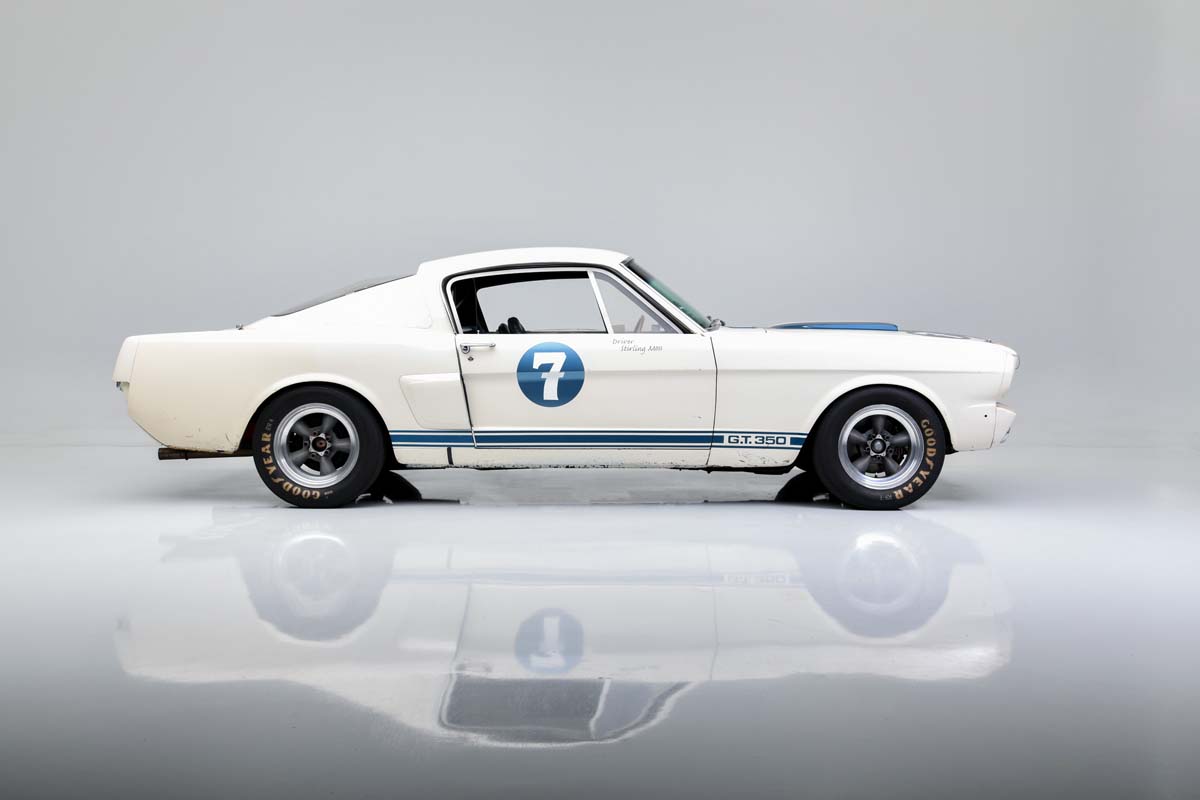 At previous auctions, in 2013 and 2017, the car bid as high as US$325,000 but failed to meet its reserve. Now, the ‘Moss Mustang’ has been consigned for Barrett-Jackson’s first-ever Houston auction on 16-18 September. The 1992 Targa Tasmania class winner is being consigned with no reserve and still carries Moss’s signature inside the boot.

“Sadly, we lost Moss last year, but the spirit of this International Motorsports Hall of Famer lives on in this Shelby that he loved,” said Craig Jackson, chairman and CEO of Barrett-Jackson. “This is a truly rare chance to own a race car owned and piloted by one of the world’s most celebrated racers.”

For more details, go to: barrett-jackson.com

Thanks to TPRM for assistance with this article.

Thanks to Motor Book World, VIC, for research material. motorbookworld.com.au