Like the ’57 Bel Air, ’65 Mustang fastback and ’68 Dodge Charger, the ’69 Camaro is an icon of American automobile styling. Little wonder then that it’s the most popular amongst first-generation Camaro aficionados. Sure, ’67 and ’68 Camaros have their appeal, but there’s something undeniably attractive about a ’69 Camaro. If it’s a genuine Z28 version, like the car featured, that’s even better. 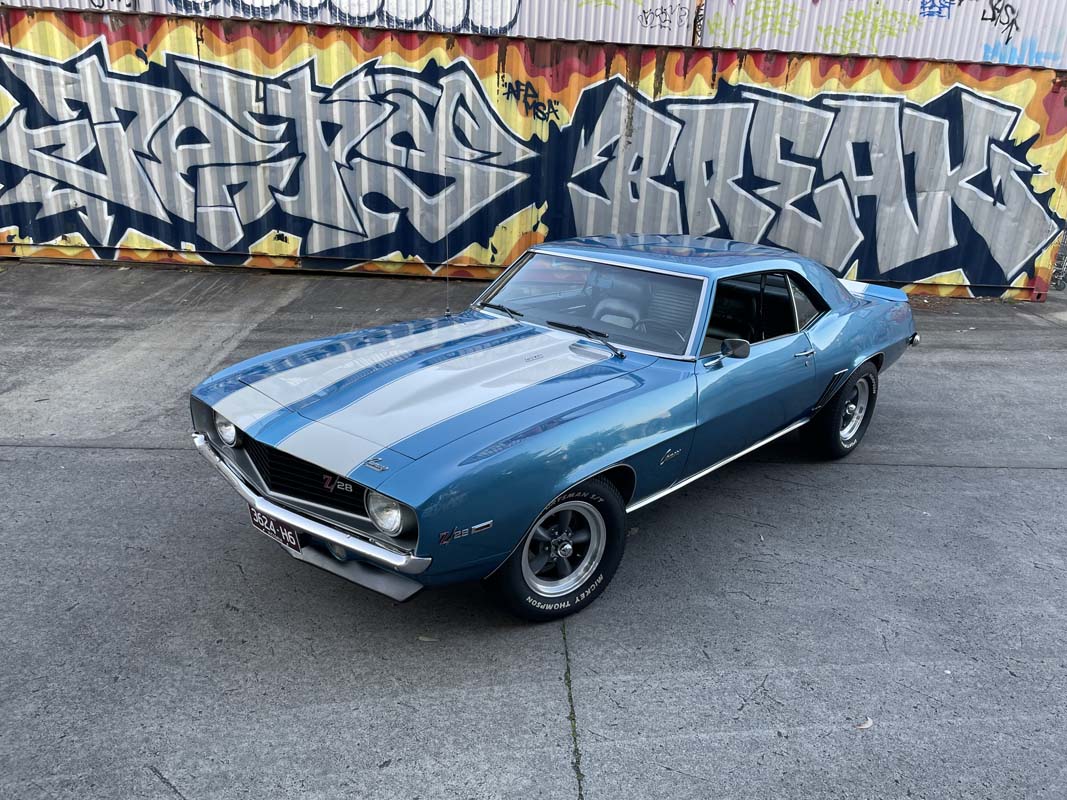 Ford created the Pony Car category with the Mustang, and while Chevrolet didn’t offer a rival until more than two years later, they did throw the first punch in producing an homologation special – the Z28 – for the Trans American Sedan Championship racing series.

Trans Am racing only awarded manufacturer points initially, and Chevrolet’s Vince Piggins was one of the few auto industry executives who could see potential in the series to do good things for Chevrolet in dealer showrooms across America. 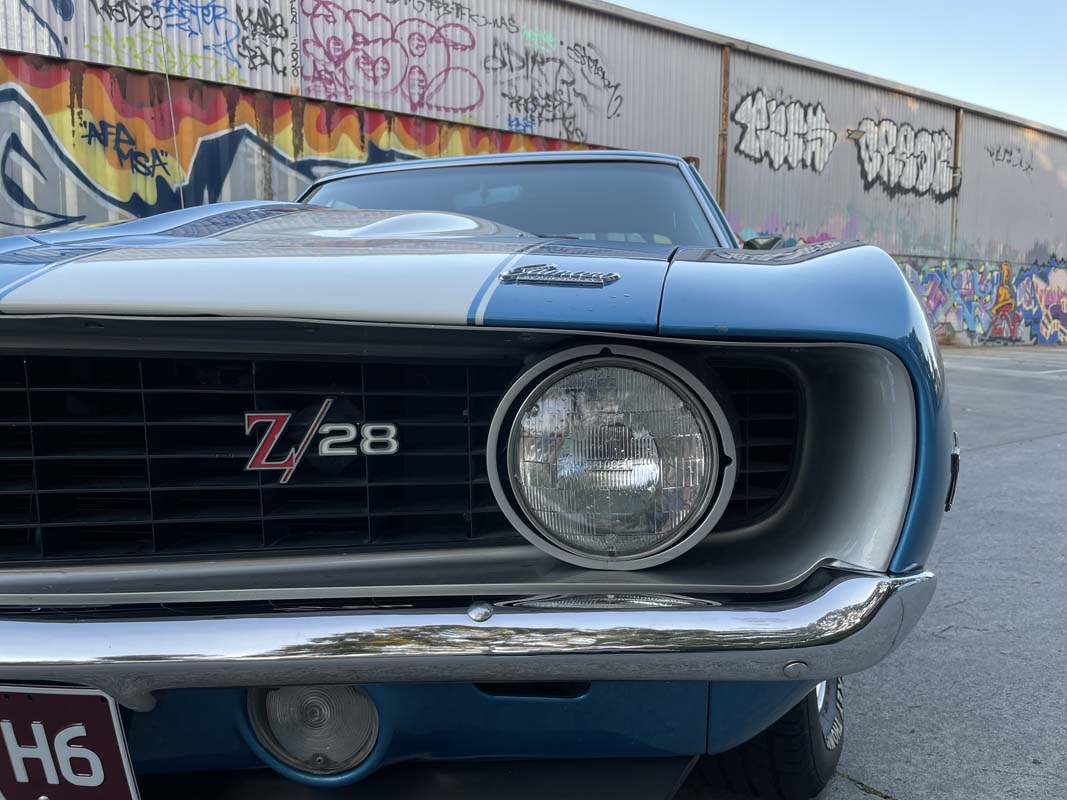 Piggins had been a part of Hudson’s domination of NASCAR in the early 1950s and applied that knowledge when he came to GM in 1955, creating the ‘Black Widow’ Chevys that were a force in NASCAR, despite an industry-wide ban on factory racing involvement that came into effect in 1957.

While manufacturers couldn’t be supporting racing, dealers could, so Piggins prepared a comprehensive guide for dealers to create a Chevy race winner.

When a GM-specific mandate to withdraw support for motorsports came into effect in 1963, Piggins had to get creative again to ensure Chevrolet was still a force in motorsport. Part of this was the Central Office Production Order (COPO) programme that allowed in-the-know people to covertly order new vehicles with a combination of racing-spec parts (usually labelled as ‘heavy duty’) from the factory.

GM’s corporate racing ban, like the industry ban before it, was always something of a sham, so it was no surprise a few years later when GM became more overt about their involvement in motorsport. The Camaro Z28, created specifically to enable Chevrolet’s pony car to go Trans Am racing, was one of the first examples of the new approach.

The ‘Z28’ tag referred to GM's in-house production code - RPO Z-28 - for the Camaro Trans Am homologation package and had no meaning beyond that. Piggins had apparently wanted to call the Camaro homologation special ‘Cheetah’, but that name was already in use and perhaps a little too close to Mercury’s Cougar for GM’s liking.

Among the rules for Trans Am’s Over 2 Litre class, engine capacity was capped at 5.0 litres (305ci), which was a problem for Chevrolet, as the smallest V8 offered in a Camaro for its 1967 debut year was 327ci. Chevrolet did have a 283ci V8, so the crank from this was combined with the 327 block to make an engine of 302ci – just under the capacity limit.

The rest of the Z28 spec included a four-speed manual transmission, quick-ratio steering, heavy-duty suspension, power-assisted disc front brakes and Corvette-style 15-inch Rally wheels. Dual racing stripes were standard and there were a handful of Z28-specific options. However, you couldn’t get a Z28 with an automatic and you couldn’t have it as a convertible, either. 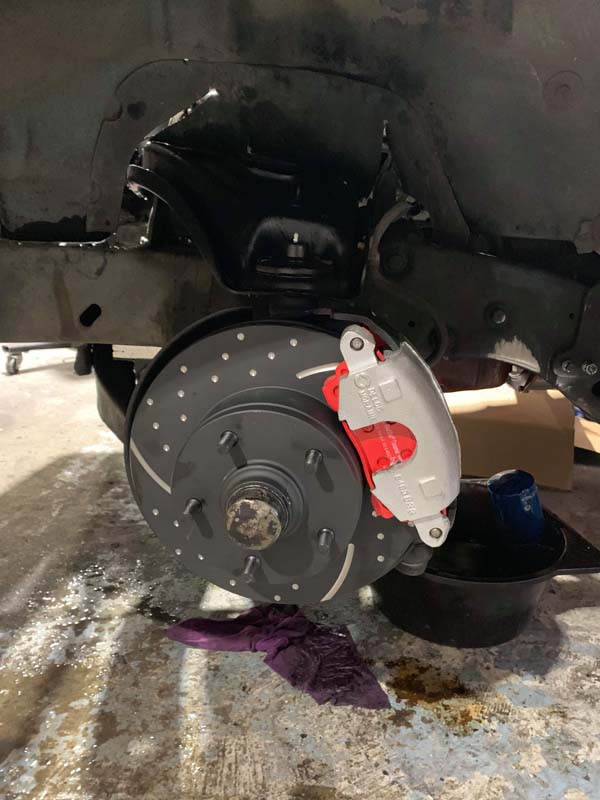 Introduced in November, 1966, the Z28 did its job in getting the Camaro into Trans Am, but it wasn’t until the Penske-Sunoco Camaro driven by Mark Donohue started winning in the second half of the ’67 season that people started to cotton on to the car.

James Politino, the owner of the car featured, is one of the many who appreciates the history, style and presence of a ’69 Camaro.

“The look of the ’69 is so aggressive compared to the 67/68 Camaro,” James enthused. “Those squared off guards and that massive front opening are menacing!”

That tunnelled front-end was the major styling difference compared to a 1968 Camaro, with the cowl induction bonnet adding to the aggressive appearance.

Other upgrades for 1969 included four-bolt main bearing caps for the 302 V8, a thicker front stabiliser bar and wider wheels, while four-wheel disc brakes and a cross-ram intake were amongst the options.

In 2017, James started looking to buy the ’69 Camaro of his dreams, but struck more than a few hurdles along the way.

“I couldn’t find one that suited me - or my budget. I looked at a few ’67 and ’68 Camaros, but they just didn’t have the presence of a '69."
Disheartened, James bought a ’69 Corvette instead, but that didn’t satisfy the itch, so he continued searching and finally spotted his dream ’69 Camaro advertised online in 2019.

“Le Mans Blue with racing stripes, manual transmission and posi-traction rear end – it ticked all the boxes. This was THE ONE!” James laughed. “Being a genuine Z28 was a massive bonus, too. I was so excited, I bought it before my Corvette sold!”

The seller was the car’s first Australian owner, who had owned it for eleven years, but its American history was mostly unknown.

As bought, the Camaro was in good condition, and while the engine wasn’t the correct “DZ” type for a ’69 Z28, that wasn’t a deal breaker for James.

The donk appeared to be the ubiquitous 350 Small Block, but closer examination revealed it had a Z28-spec crankshaft, so was 5.0-litre/302ci accurate.

Set up with lumpy cams and high-compression heads, the engine sounded great but made the car a nightmare to drive at lower speeds.

“I opted for a milder cam and changed the heads,” James explained. “The result was much more drivable, but still with plenty of punch!”

A new bellhousing was sourced for the 4-speed manual, with a new Exedy heavy-duty clutch and Hurst shifter kit fitted. The latter came after much grief with the existing linkages, which jammed on several occasions.

“I would have to get under the car and click the linkage back into place. After burning my arm on the exhaust doing this, I ordered a whole new Hurst kit from the USA.” 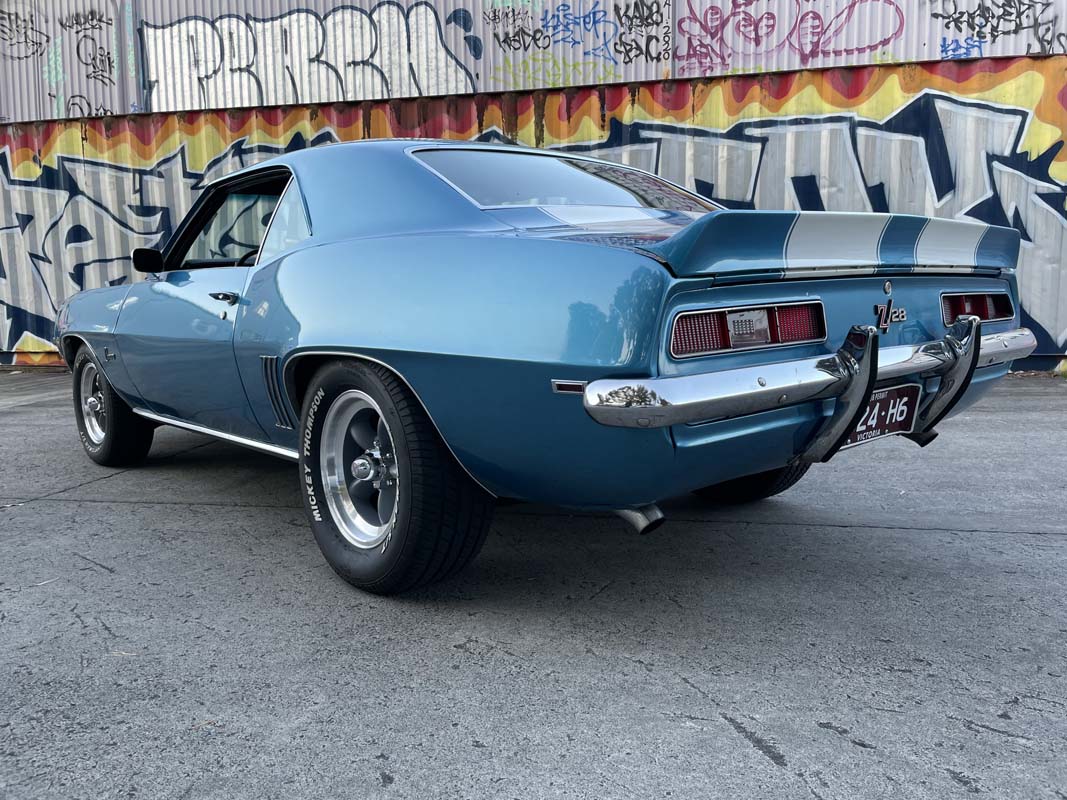 The brakes were treated to new front rotors and pads, an upgraded front sway bay was fitted and American Racing Torq Thrust D alloys were added in place of the factory Rally rims.

Inside, a tacho, new auxiliary gauges and a new centre console were fitted, James sourced a new steering wheel in the correct style and had the front seats retrimmed, with black leather and houndstooth cloth on the facings.

“At first, I said to myself, ‘Let’s put some nice wheels on her and maybe a sway bar,’ but I ended up doing a lot more. This can get addictive!” James laughed. 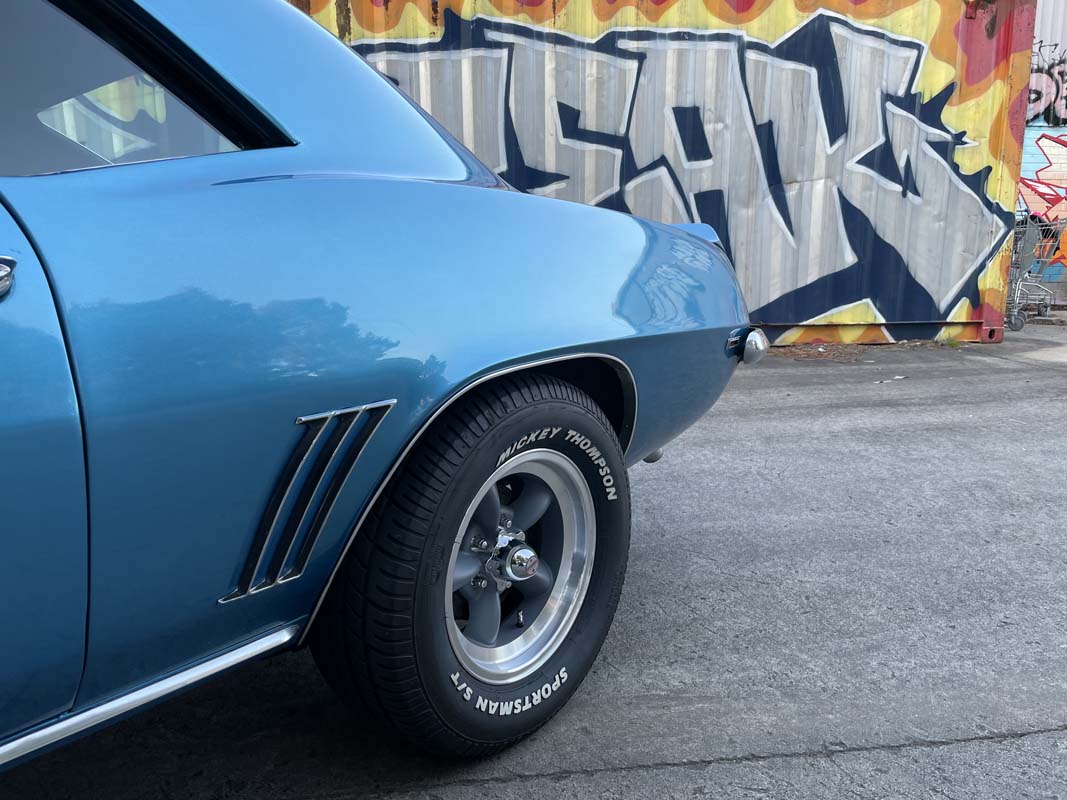 So, what was to be a simple tidy up turned into something much bigger, and after many months and many dollars, James had a Camaro Z28 that was ready to enjoy.

But James lives in Melbourne, so opportunities to drive the Camaro in the ‘Lockdown Capital of the World’ have been minimal in the past two years. That’s part of the reason behind his decision to sell it (see below).

“I still love the car. It has that “big balls” feeling, even though she’s a little 5 litre. With the choppy cam at the lights, even on idle, you feel like you’re in a true beast!” 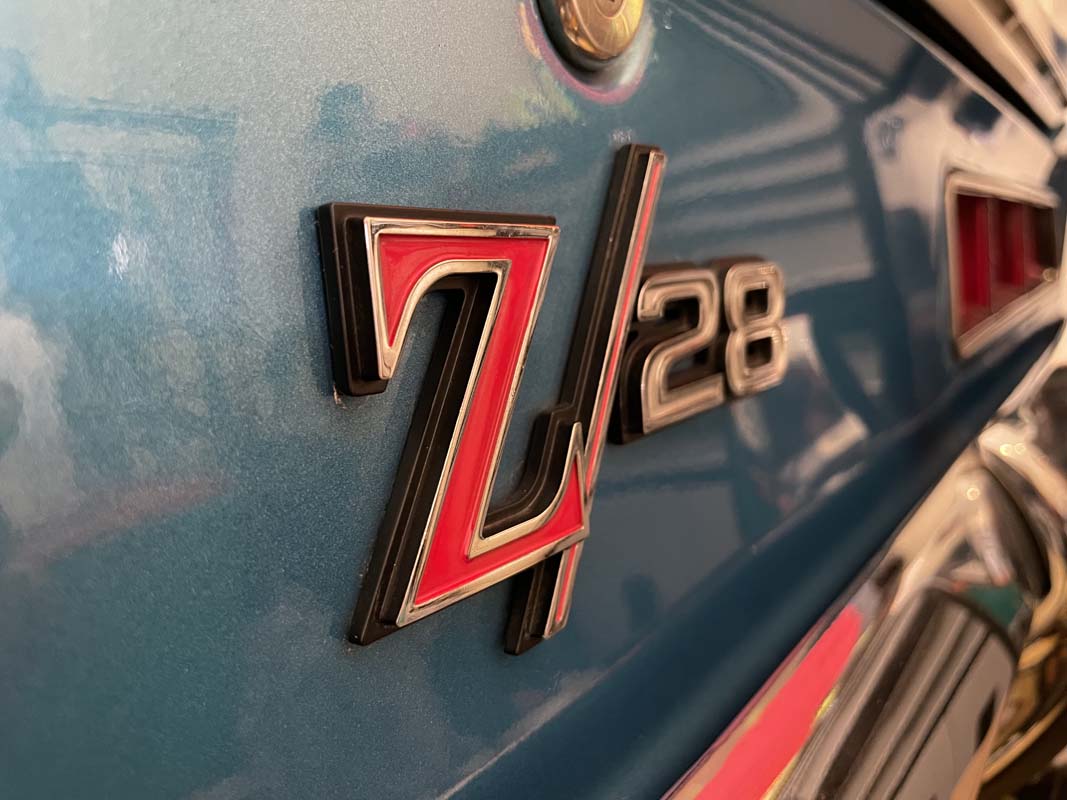 It’s not an easy decision to sell, but James has some other automotive boxes to tick, including a recently purchased Mazda NB MX-5 that he plans to upgrade with a turbo, as well as finishing his long-term LS3-converted JZA80 Supra project.

As mentioned at the top of this article, ’69 Camaros are highly desirable, so it doesn’t need the hard sell. This example has had a lot put into it, but remains true to the Trans Am homologation special that inspired it. Just as importantly, it looks pretty damn cool, too! 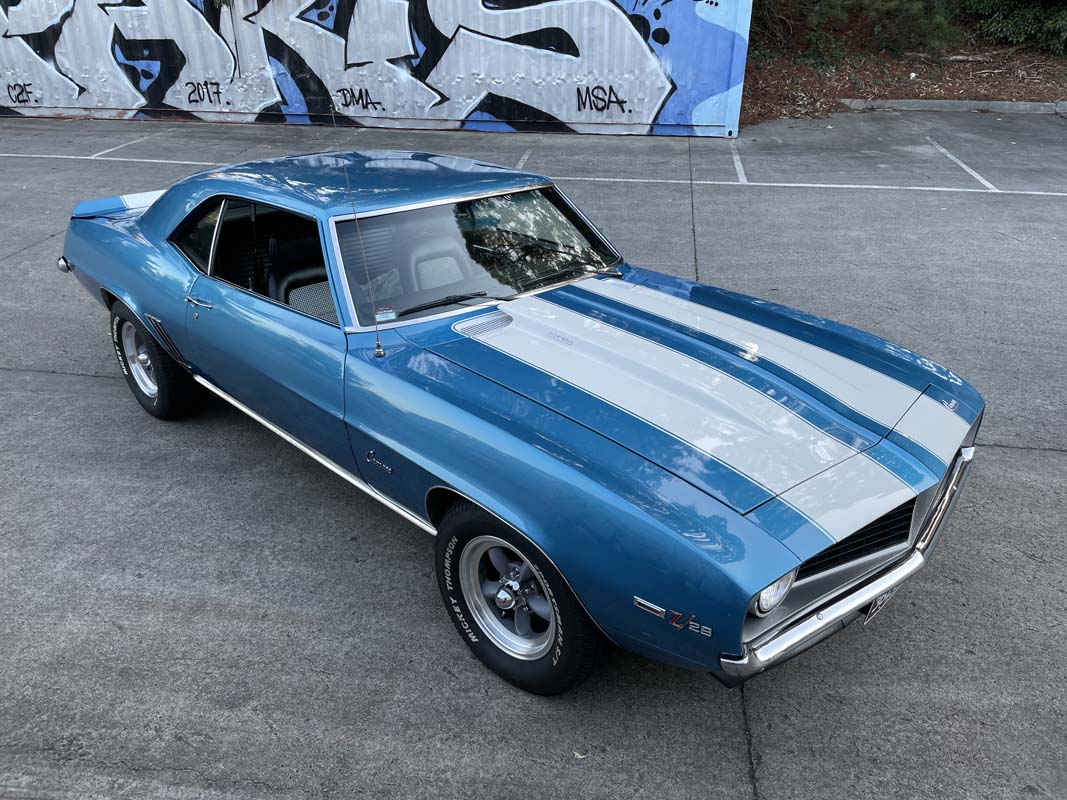 With new automotive adventures to undertake, James is putting his Camaro Z28 on the market.

A milder engine tune and upgraded suspension, brakes and cooling make this car practical to drive at pace or in suburbia, while new and upgraded interior appointments enhance the experience from the driver’s seat.

Thanks to the time, effort and money that’s been put into this car over the past 18 months, there’s nothing the new owner needs to do except turn the key and drive.