Full credit must go to Mazda for making rotary engine technology work where many others failed or didn’t even make the attempt. Sure, Mazda never truly conquered the rotary’s thirst, but across more than 50 years of development, they made it smooth, increasingly powerful and, most importantly, reliable. When the last mass-production rotary-engined Mazda RX-8 came off the line in 2012, it marked the end of an era. An era that was arguably at its most exciting in the 1970s. 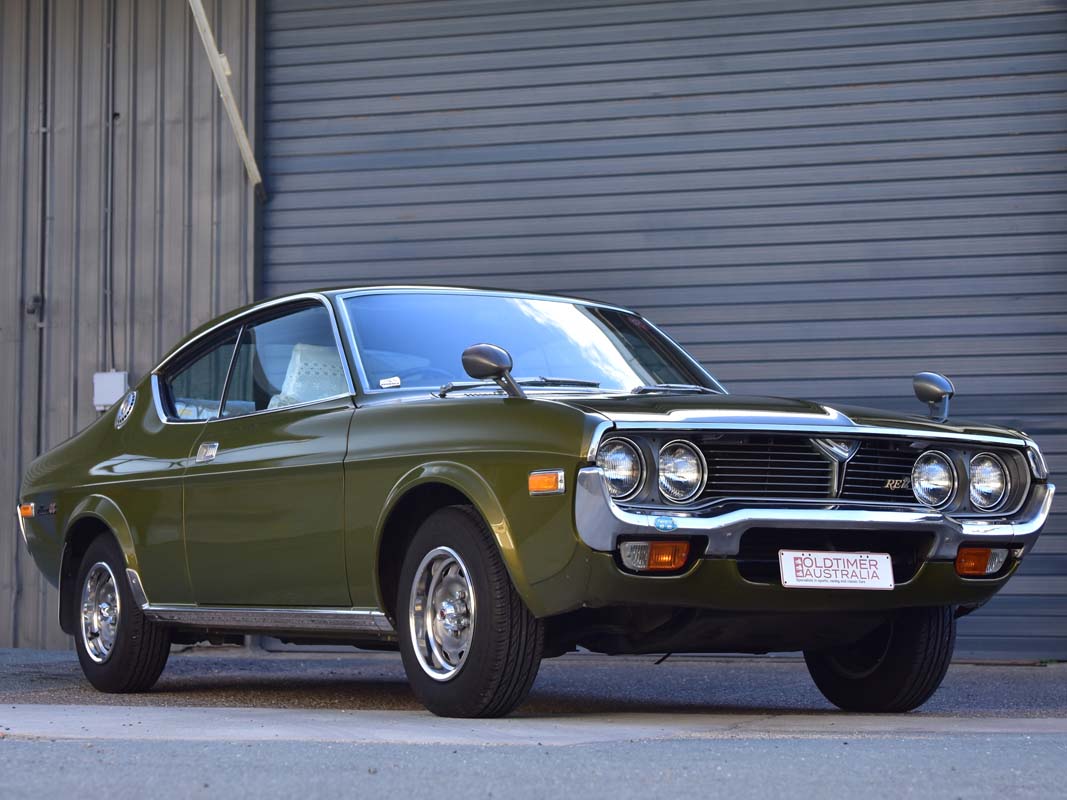 Mazda’s history as a carmaker can be traced back to 1931, when the ‘Mazda-Go’ was released. Essentially a motorised 3-wheel rickshaw, the Mazda-Go was more motorcycle than truck, but it set a template for Mazda commercial vehicles that lasted for decades. Conventional four-wheeled trucks followed the Mazda-Go, along with larger versions of the 3-wheeler and other commercial vehicles. 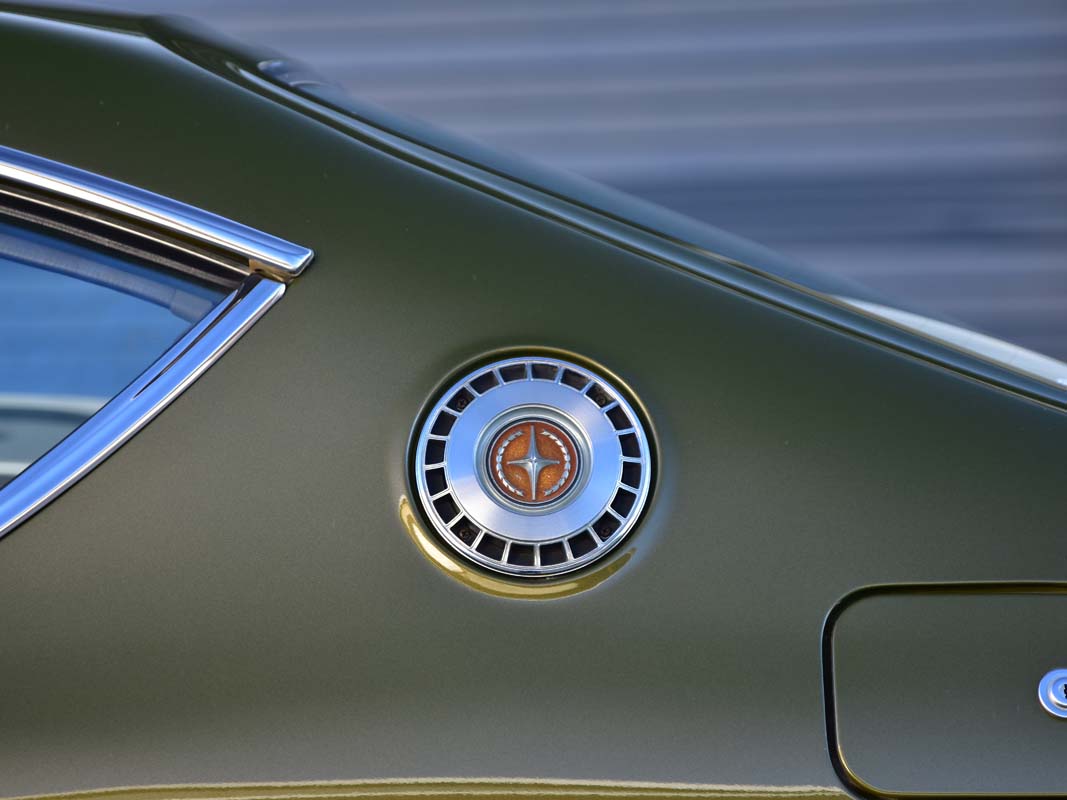 When speaking of the earliest Mazda vehicles, it's worth noting that the “Mazda” name only applied to the vehicles themselves - the company that produced them was Toyo Kogyo Pty. Ltd.

What had started out as Toyo Cork Kogyo Pty. Ltd. in 1920 as a processor of cork products turned to machining and dropped the “cork” part of their name. The change to ‘Mazda Motor Corporation’ wouldn’t take place until 1984, which explains why Toyo Kogyo VIN plates were still in evidence on Mazda cars like the 1973 RX-4 featured. 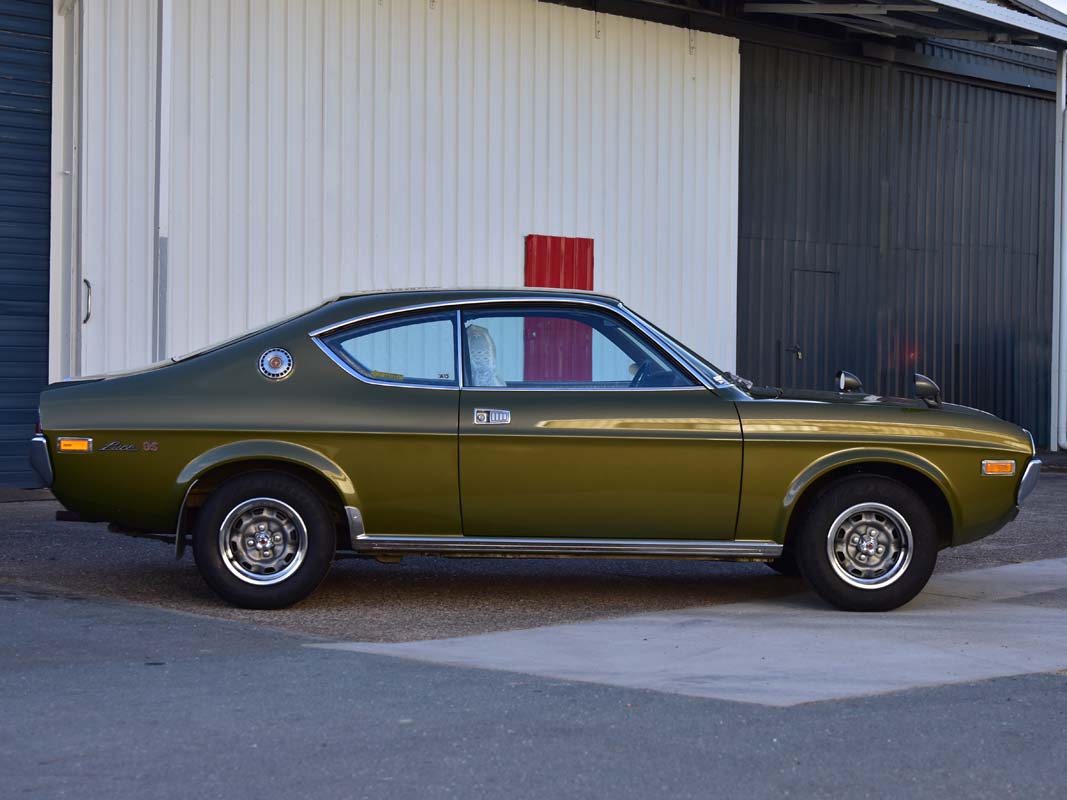 Getting back to the rotary and its place in Mazda history, NSU are rightly seen as the pioneers of the engine developed by Felix Wankel, but they weren’t the only ones to see its potential. Various other carmakers had looked closely at the rotary as a smaller, lighter and more powerful alternative to conventional piston engines.

NSU’s Wankel Spider was the first production car with a rotary, released in 1964, but it went largely unnoticed. When the Ro80 was released three years later, not only was it noticed, but widely applauded, winning the European Car of the Year and leading many rivals to seek licences from NSU to produce their own rotary-engined vehicles. Among them were automotive giants like General Motors and Citroen, but Mazda had started a collaboration with NSU years earlier. At the time, Mazda felt that going rotary would give them a point of difference against other Japanese carmakers as they sought to build their brand in overseas markets. 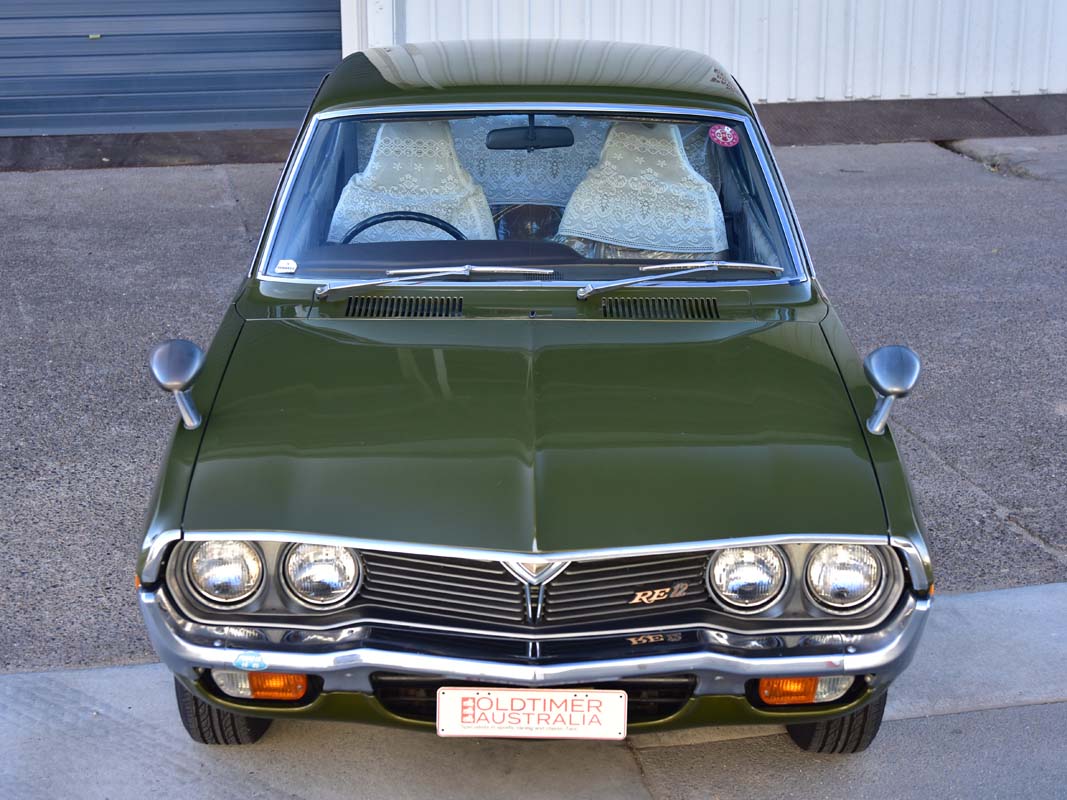 Of course, it’s widely known now that the NSU rotary was underdeveloped, particularly in regards to the compression seals, which wore quickly, leading to engine replacement after less than 50,000km in some instances. As most Ro08s were still under warranty when these failures occurred, it sent NSU into a financial tailspin, resulting in a buyout by Volkswagen in 1969 that indirectly led to the revival of Audi. 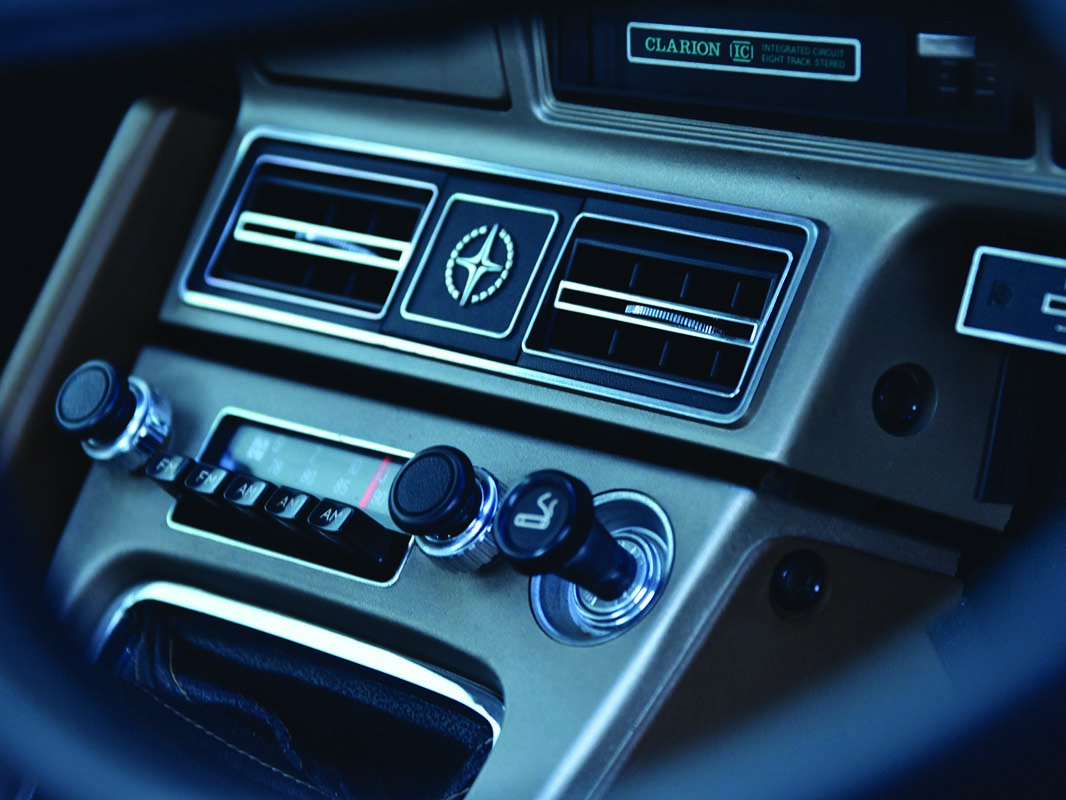 Mazda, while committed to the rotary engine, weren’t tied to it exclusively and continued to produce a range of piston-powered cars alongside their own rotaries.

The first Mazda rotary was the Cosmo. Foreshadowing what NSU would experience a few years later, Mazda had announced the Cosmo back in 1964, but getting the car to an acceptable and reliable standard meant it didn’t go into production until 1967, just a few months before the Ro80.

The R100 was next, released in 1968 as a rotary-powered equivalent of the Familia, followed by the R130 in 1969. A coupe version of the larger Luce sedan (known as the 1500 or 1800 outside of Japan), the R130 had the unusual feature of being front-wheel drive – a feature not seen on any of the Mazda rotaries that followed. 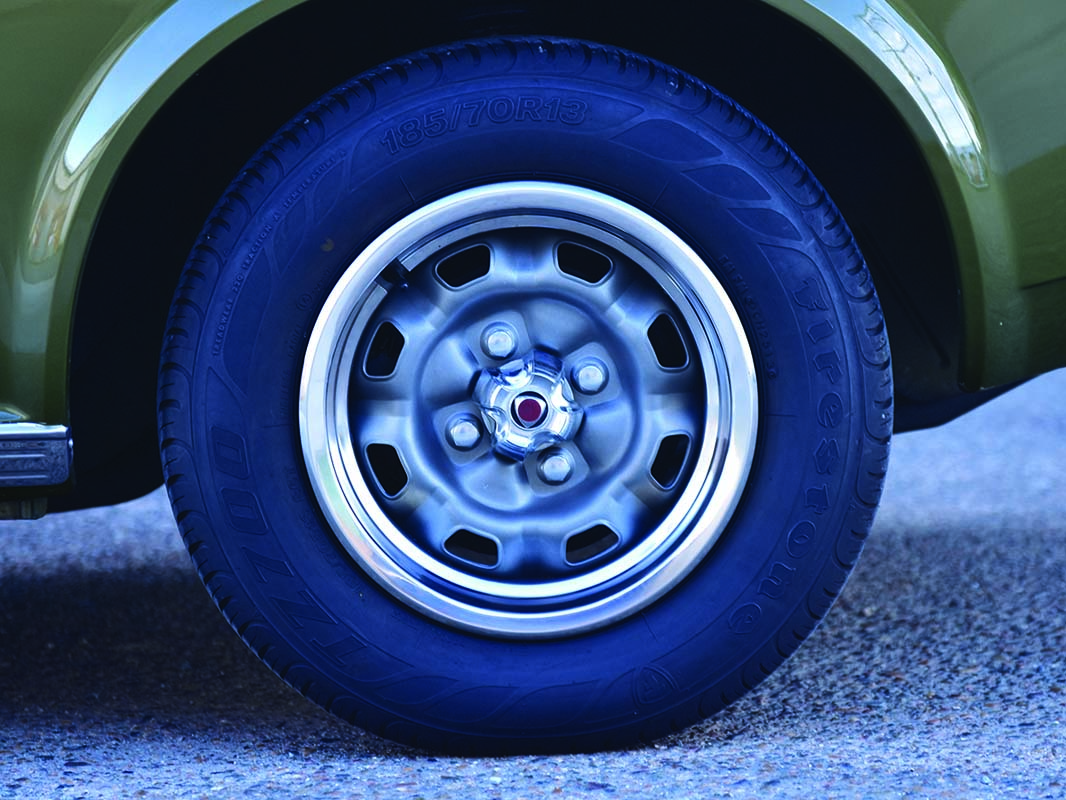 The RX-2 was next, based on the Capella and debuting in 1970, then the RX-3, based on the Grand Familia and arriving in 1971. While the “RX” name was a feature of rotary-powered Mazdas for most export markets, including Australia, these model names weren’t usually applied for the Japanese market.

Concurrent with the growth of Mazda’s rotary range, the carmaker’s presence in Australia had grown, too, with a dedicated Australian distributor established in 1967, three years before a similar factory operation was set up in the USA.

With the template established by preceding models like the RX-2 and RX-3, the RX-4 arrived in late 1972. Offered initially as a four-door sedan or two-door coupe (a five-door station wagon was added later), the RX-4 was an upmarket model, with a higher level of interior trim and more standard features, reflecting what was offered on the related Luce (aka 929).

Seats were still trimmed in vinyl, but well-padded, with standard features including full carpeting, flow-through ventilation, a heater, full instrumentation, a push-button radio and 8-track player.

On RX-4 coupes like the example featured, elements not found on the sedan or wagon included an instrument panel biased towards the driver and an overhead console with warning lamps, interior light and an additional swivelling map light.

The fastback styling of the coupes meant they got a totally different tail light treatment to the sedans, too, with stop/tail and indicator lights in four separate pods. The front-end treatment was mostly common across the range, with quad headlamps tunnelled into a grille framed with chrome trim, while a complex bumper bar featured cut-outs for the parking and indicator lights mounted below. 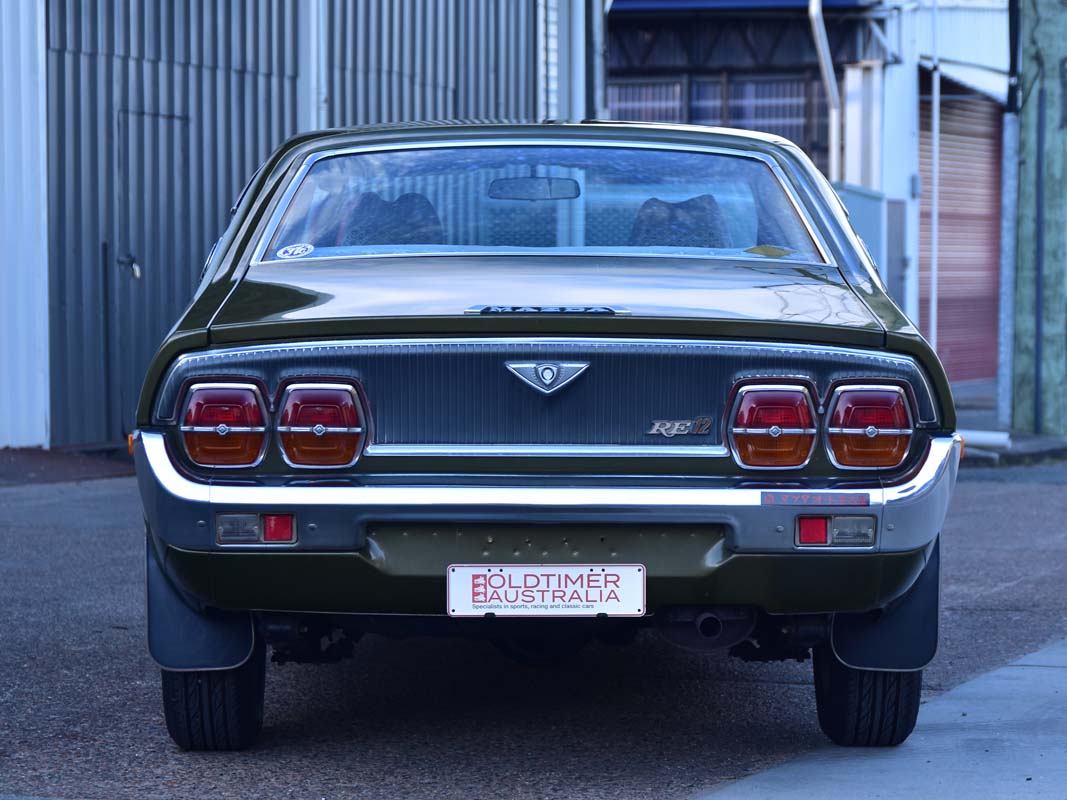 In addition to being better appointed than other Mazda rotaries, the RX-4 was larger, too, but without seeing one in the flesh, the scale can be deceptive.

Excluding the short-lived, Holden Premier-based Roadpacer that Mazda offered in the Japanese market in the mid-1970s, the RX-4 and related 929 were the largest Mazda passenger cars you could buy in the 1970s.

As a comparison, the RX-4 was around the same size as an LH Torana or TC Cortina, the latter being another example of a car that looks bigger than it actually is. That meant reasonable comfort for five in the sedan, and even though back seat space in the two-door was cramped, it would be unfair to describe the RX-4 coupe as a 2+2.

When launched for the 1973 model year, the RX-4 was powered by the same 1.1-litre ‘12A’ twin-rotor engine that had been used for the RX-2 and domestic market versions of the RX-3. Producing 130bhp (97kW) at 7000rpm and 115lb/ft (154Nm) at 4000rpm, the 12A did its best work higher in the rev range, like most rotaries, so suited spirited driving at speed rather than traffic light getaways.

While adequate for the RX-2, the 12A was understrength for the larger, heavier RX-4, so a year later, the 1.3-litre ‘13B’ rotary was introduced, upping maximums slightly to 100.7kW and 157Nm. The standard powerplant for the remainder of the RX-4’s model life, the 13B didn’t turn the RX-4 into a sports car, but that wasn’t the model’s market niche to begin with – it was a performance car, but not a high-performance car. 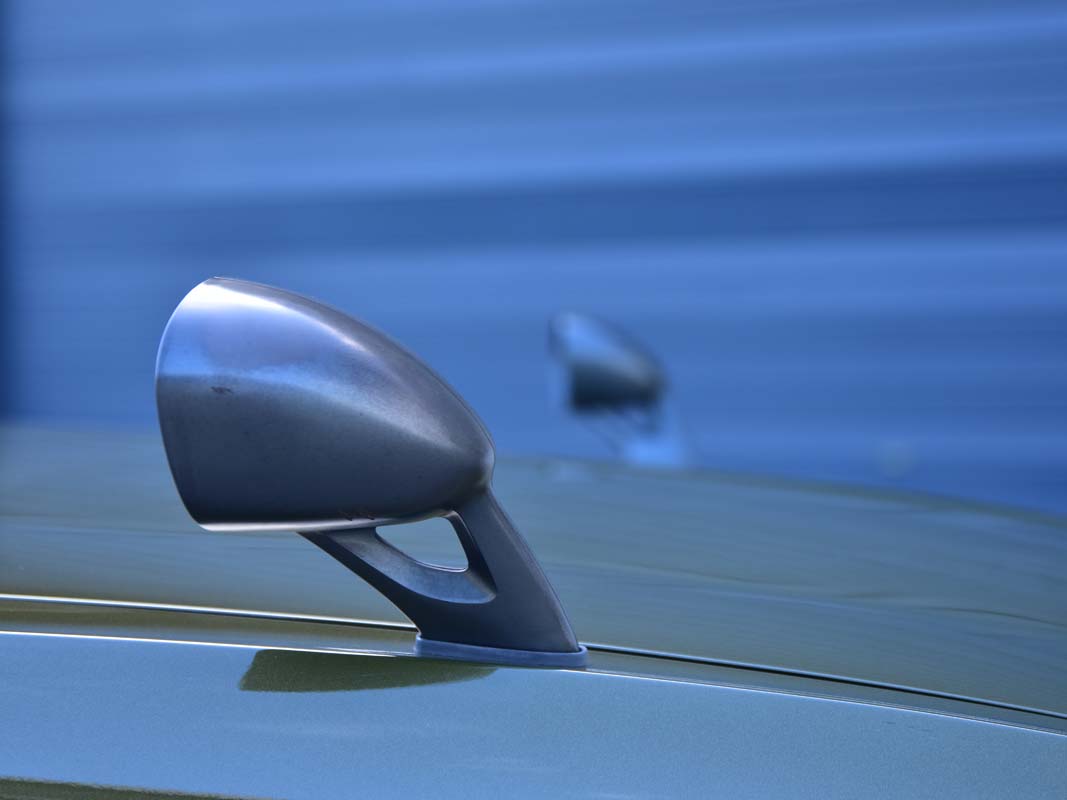 Its rotary engine aside, the RX-4 was very conventional in all other respects mechanically, with transmission options including a four-speed manual (as fitted to the feature car) or three-speed automatic. Australian-delivered RX-4 coupes were only offered with the manual, although either transmission was available with the sedan. 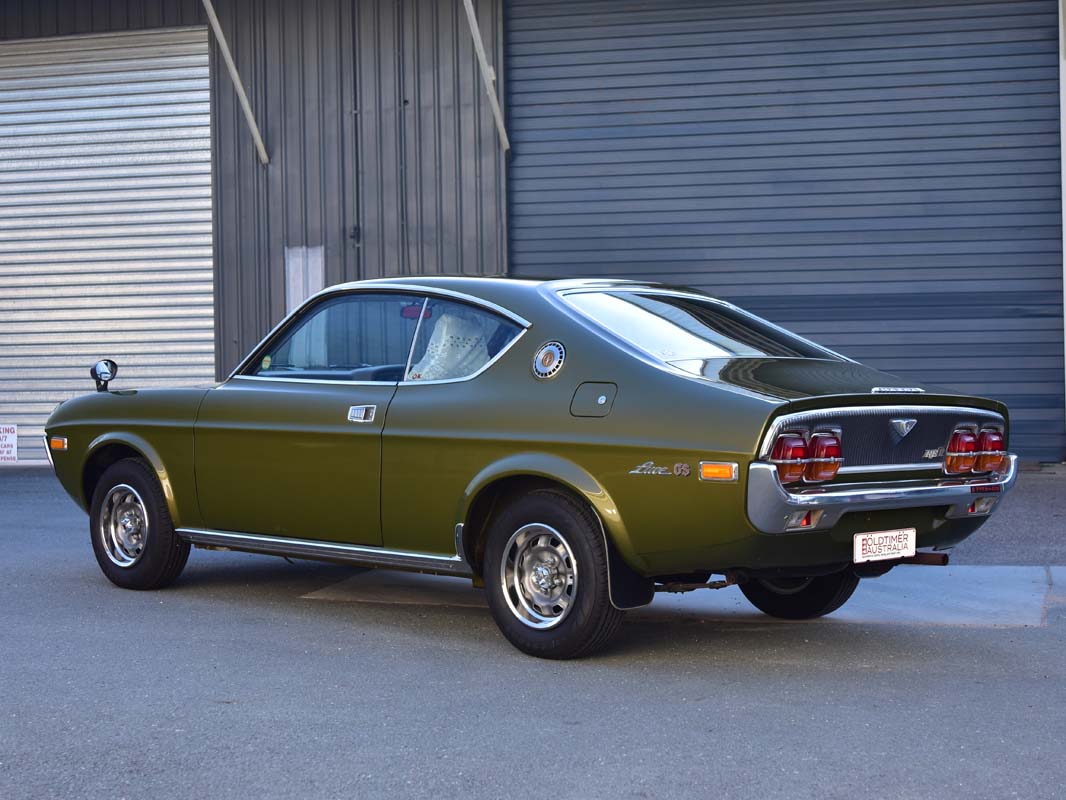 When it came to pricing, Mazdas, being fully imported, were at a disadvantage against locally-assembled or manufactured rivals. The starting price for an RX-4 in 1973 was $3,938 for the manual sedan (+ $300 for the auto) and $4,198 for the coupe - not an insignificant amount and more than what you’d pay for a well-optioned HQ Kingswood sedan. An arguably fairer price (and performance) comparison was against European imports from the likes of Peugeot and Fiat.

A year later, rising inflation and reduced import tariffs meant local product like an LH Torana SL/R was much closer to an RX-4 in price.

Like most Japanese cars from the ’70s, the RX-4 was well built, but not immune to rust, so survivors from this period are rare, making the featured example all the more remarkable. 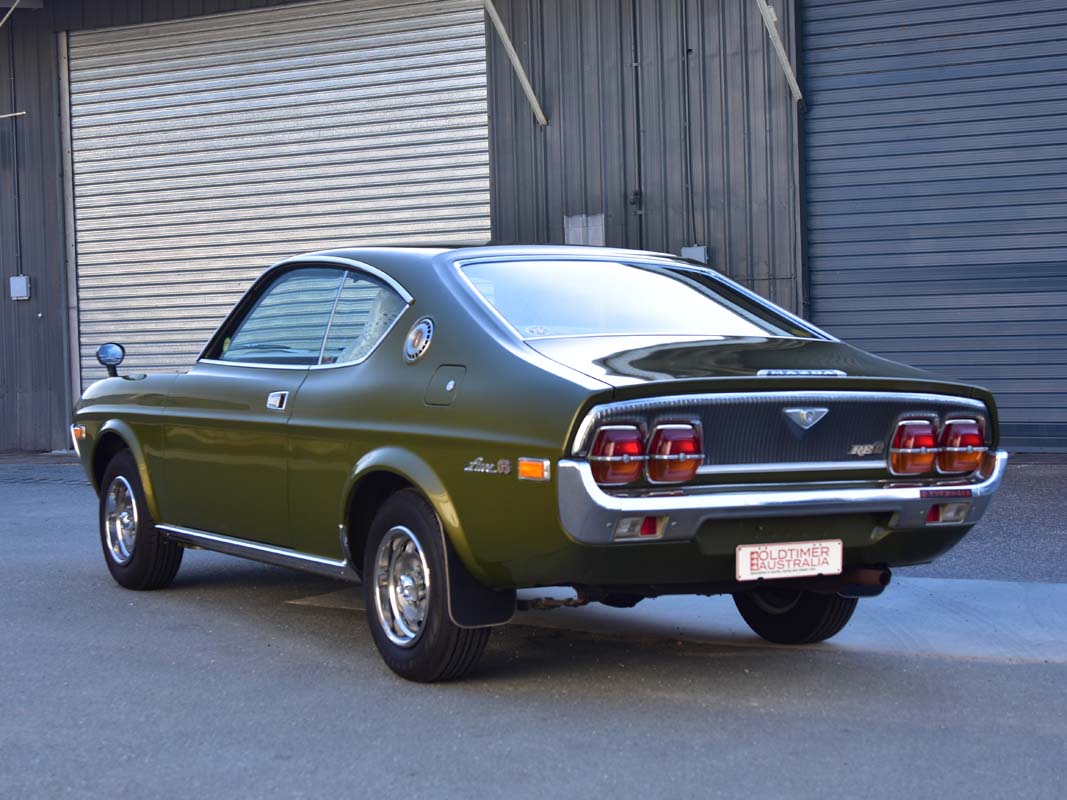 Currently on consignment with Oldtimer Australia in Queensland (see breakout), the condition of this particular 1973-model RX-4 is nothing short of amazing.

The first thing eagle-eyed observers will notice is that there’s no ‘RX-4’ badging to be seen. That’s because this example was built for the Japanese market, so it’s badged as a ‘Luce GS’.

Spending the first 40 years of its life in Japan, service books supplied with the car show it was purchased on 18 July, 1973, by a resident of Takahama City, south of Nagoya.

As it sits with Oldtimer Australia, the original delivery plastic still covers the seats, doorcards, sunvisors and even the indicator stalk, which would seem to make the oh-so-Japanese seat doilies redundant, but they were with the car when it came to Australia in 2013 and the current owner has kept them in place. 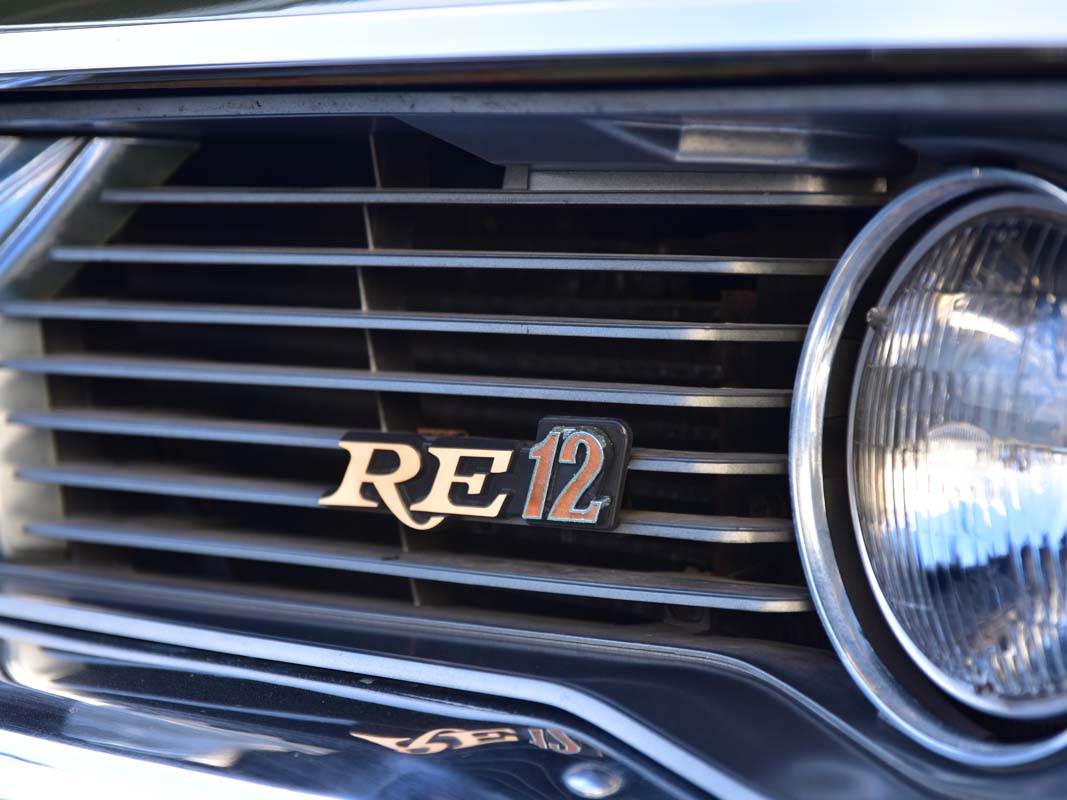 More remarkable than the untouched interior is the listed mileage of just 6,397km, which would equate to less than 50km a year, but as this car was last registered in Japan in 1985, it suggests the bulk of the mileage was covered in the first decade of ownership.

Why this Mazda’s first and subsequent owners used it so sparingly and kept the protective plastic in place is unclear, but it’s meant this car has remained in remarkably good condition and a true time capsule of the period. 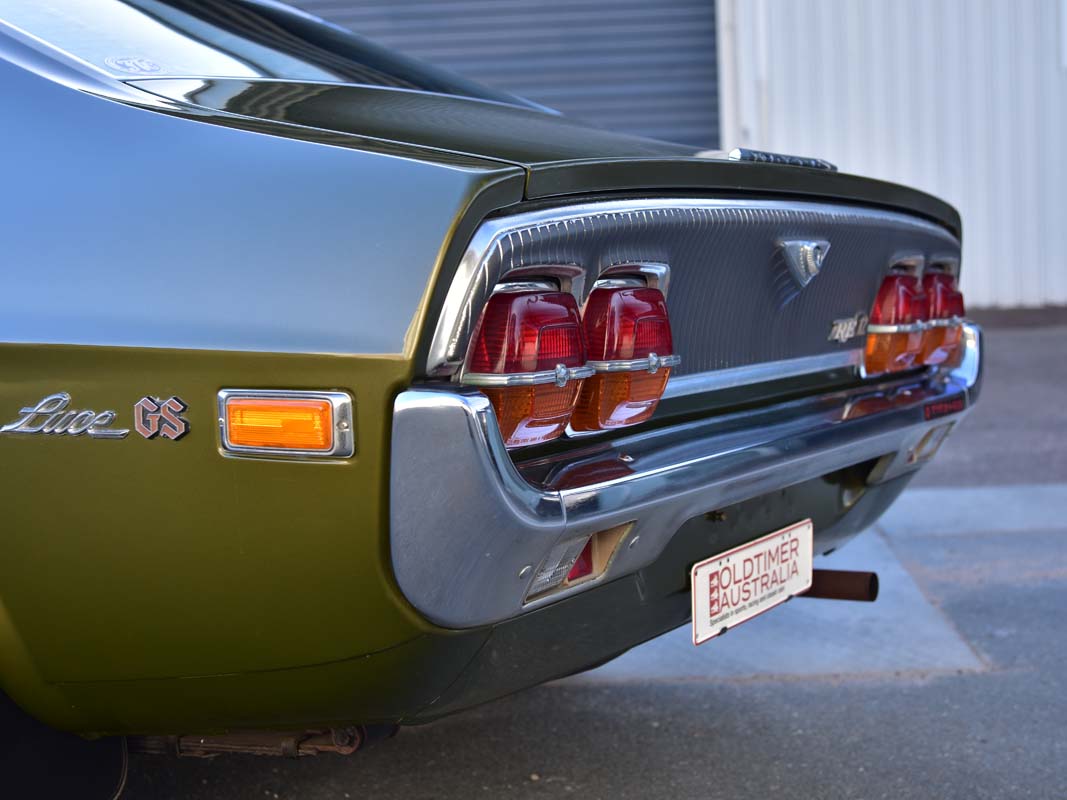 When it came to Australia in 2013, this RX-4 was still on its original Bridgestone Skyway Delux tyres. These have been replaced with new Firestone TZ700s, but will be included with the sale for the concours perfectionist.

Outside, the factory Jewel Green paint is mostly unblemished, as is the chrome and brightwork, while inside, those factory plastic covers have ensured the brown vinyl trim is as good as new.

The kid glove treatment this car has enjoyed for decades is also reflected in the dash and console, with no cracks, scratches or fading. Same goes for the headliner and carpets. The boot is super clean, too, and includes a spare Bridgestone and all the tools.

While the engine bay is showing some age, it’s still clean and, more importantly, everything in there works, with the current enthusiast owner taking the car out occasionally to keep it supple without adding too much to the mileage.

The asking price for this original, unrestored 1973 Mazda RX-4 is $174,950. Obviously, this is a premium price and significantly more than what good examples have been advertised for of late, but this car is also much more than a “good example”.

If you haven’t been keeping an eye on early Mazda values, you may have missed a restored RX-4 coupe that was asking $135,000 when listed with JUST CARS a few years ago, while a trio of R100 coupes available at time of writing were priced around the $170,000 mark each. That puts this RX-4’s asking price into perspective. 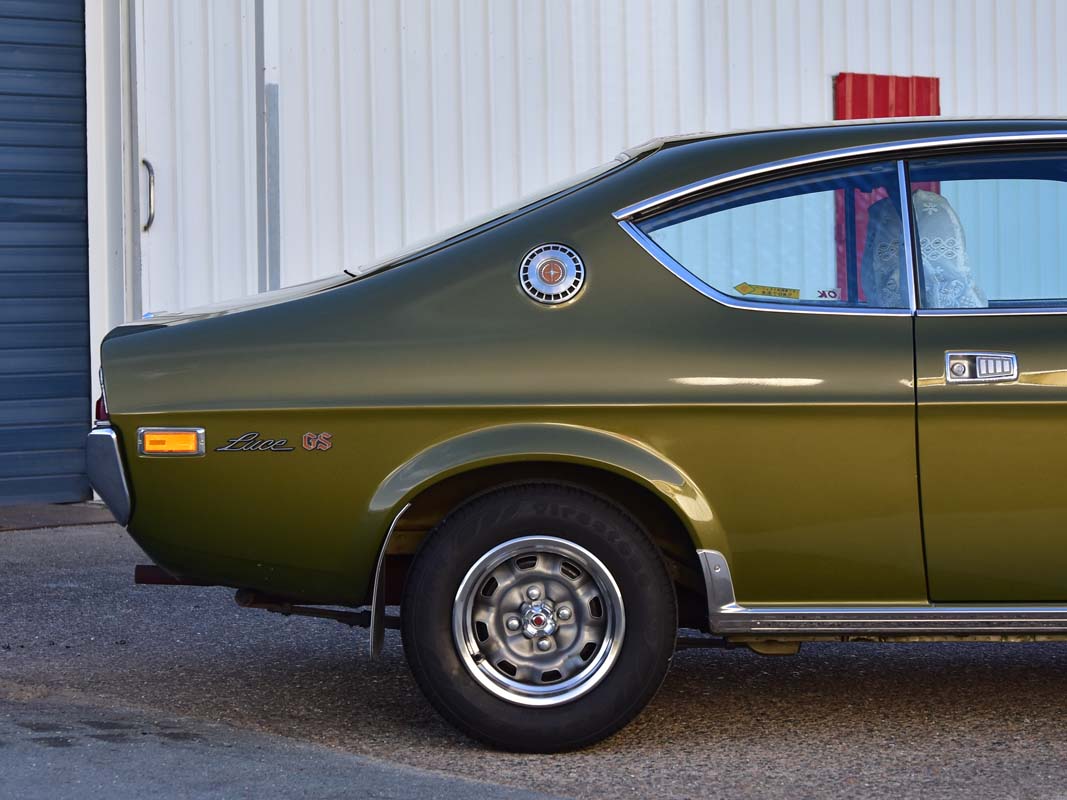 In terms of Mazda values, the C1960s Cosmo is arguably the current benchmark, with six-figure sums the norm and AU$186K for one example that was auctioned in the US two years ago.

So, if this RX-4 sells for its asking price, it’ll set a new benchmark for the model here. Regardless of the outcome, it’s remarkable that this car has survived as long as it has, in the condition it has, while still being a perfectly usable and functional car – and one that looks amazing, too!

Thanks to Motor Book World for research material used in this article.

On consignment with Oldtimer Australia, this RX-4 coupe is located in Queensland and is a true time capsule.

With the protective plastic coverings still inside, there would have to be very few, if any, examples in a similar condition for their age.

This Mazda hasn’t gone unused, though, with 6,397km on the odometer and the 12A rotary in good running condition.

Everything the car was built with remains in place and everything works, so this RX-4 could be enjoyed on the road as a club car, or as a static display in a collection or museum.

Call 0417 828 569 for more details, or go to: oldtimeraustralia.com to see a full photo set of this remarkable vehicle.