From a rusty shell to a restored revelation, this classic Mini Moke has been remade just the way its owner wanted it.

Jessica Hepworth has been passionate about cars since she was a kid, but it was only recently that her passion turned to restoring a car of her own. Having been raised on muscle cars, the choice of a Mini Moke for that first build may seem a little strange, but as Jessica explains, it was her husband that steered her in a different automotive direction… 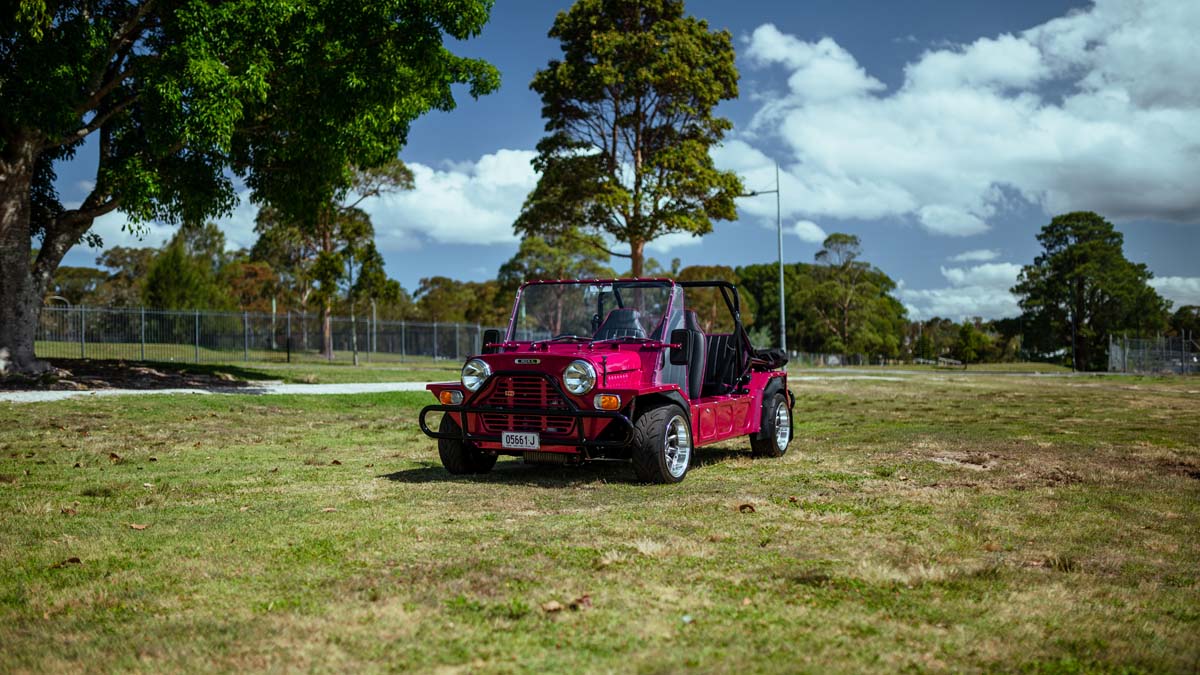 From a really young age, my job was cleaning the wheels on my parents’ car. I’ve grown up around cars and car shows, but was never interested in Minis at all - I was more into muscle cars and V8s. That was until I met my husband, Kyle, who had Nissan Skylines and a Mini Cooper S.

Inspired by this new direction, the hunt for a car of my own didn’t start straight away, but in 2017, a friend offered me a Moke.

It was a genuine Californian and a 1979 model, which meant it would have been fitted with a 1275cc engine and an upgraded interior as standard, but what I was being offered was not much more than a rusty old shell.

I’ll admit that I wasn’t too sure at first, but after a couple of hours I decided to go all in and just do it!

I didn’t know it when I started, but I had three years ahead of me in making that rusty shell into my dream car. It was a long and exhausting build to meet my vision and standards.

I work full time, so could only devote weekends to the project. Nevertheless, I dedicated every weekend to getting the car to where it needed to be.

My family pitched in to help and we all started by stripping the body back to bare metal by hand, using paint stripper and a scraper, then cutting out all the rust and replacing it with solid metal.

My little sister Maddy, who was 8 years old at the time, even got herself all geared up and helped to scrape off all the paint from the side panels. She also kept us all in line!

We then tried our hand with a spray gun in the backyard to coat the body in primer. That was a success, so we decided we weren’t that bad at painting and sprayed the underside ourselves, too, using a black Raptor liner.

The next step was to clean and paint the subframes, suspension, hubs and trailing arms, then fit them all with brand new bushes and bearings. With that completed, we fitted the subframes and some temporary wheels to the body to make it a rolling shell.

From this point, the build was supposed to be a cheap and quick, but I realised that I didn’t want “old things” on my car. That meant I had to spend some money (a lot of money, actually) making everything shiny, new and perfect!

Because of my high standards, and to get the paint done to a level we couldn’t achieve at home, I decided to take the Moke a panel shop and selected TSG Panel & Paint in West Gosford.

They completely understood my vision and smoothed out the lumps and bumps in the primered body to ensure it was the cleanest-looking Moke ever before it was ready for paint!

I didn’t want the dilemma of not being able to recreate a custom colour if I ever needed to repaint a panel, so went with a factory colour. However, my favourite colour is pink, which limited the options. But, as much as I wanted my Moke to be pink, I was adamant that I wanted a manly looking pink and not some girly one! 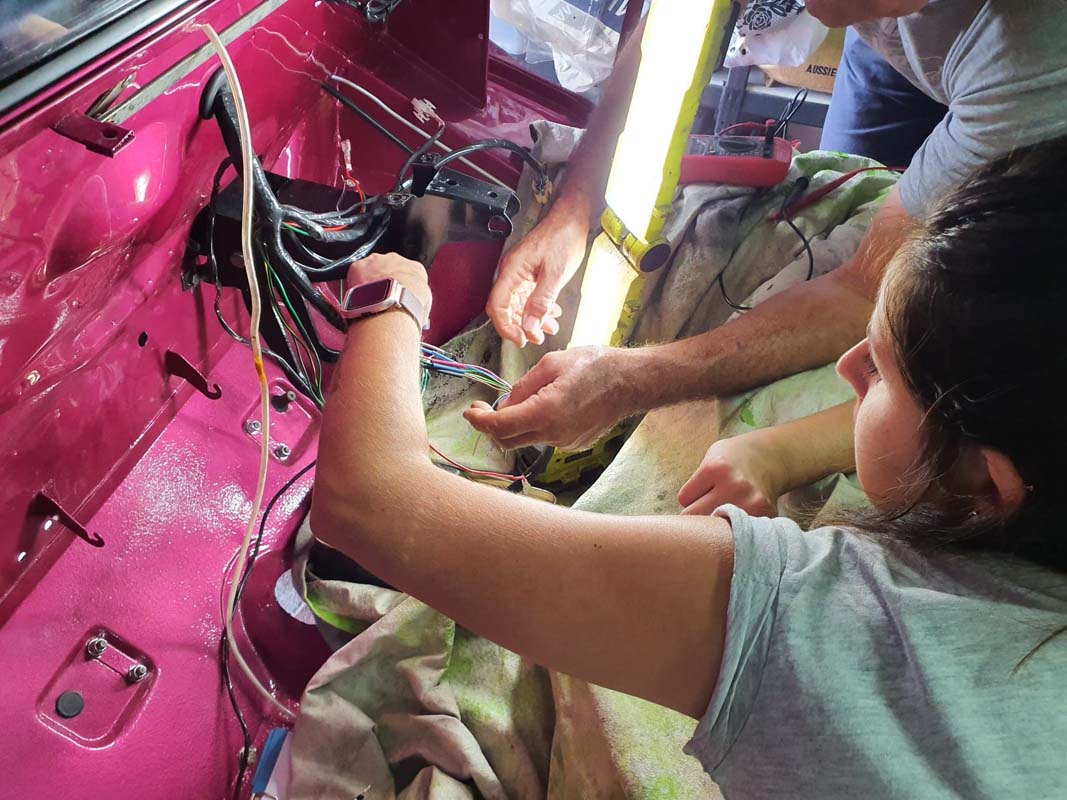 My chosen colour was Raspberry Metallic, which is actually a Toyota colour. When going through colours at a local paint shop, I also shortlisted another pink, which was more of a purple shade, but after getting a sample panel sprayed, I decided it just wasn’t the right colour for my car.

So, with Raspberry Metallic selected, TSG got the job of spraying the car.

With the painting completed, we got the rolling shell back home and continued working on the engine. My husband Kyle, father-in-law Graham and I completely built the 1275cc four-cylinder and added some enhancements, too.

We had earlier sent it off to Graham Russell Engineering in Sydney for machining, and once we had it back home, I took pride in ensuring that I was the one who got my hands into it and did as much as I could myself.

To the engine, I added a 266 race cam, 45DCOE Weber carby, braided stainless steel lines and a Maniflow exhaust kit including extractors and a 1.75-inch exhaust system.

I also rebuilt the four-speed gearbox, which we sourced out of a Clubman GT. The bearings and synchros needed replacing and first and second gears were showing signs of wear, so they were also replaced. A Moke cross pin diff was fitted, too.

The next stage was a delicate one - I didn’t want to put a single scratch on my precious pink baby – so the engine and gearbox were wrapped in rags before all three of us carefully fitted them into the car.

To protect the paint even further, we had it ceramic coated.

Brakes and a Bikini

For the brakes, I decided to upgrade them to suit modern traffic speeds. Even as late as 1979, when my Moke was originally built, drums were still standard all round.

I sourced a set of 213mm (8.4-inch) Minisport front discs with 4-piston calipers for the front end and kept the drums at the rear.

As he'd done with the fuel lines, Graham made all the brake lines by hand, carefully measuring and bending, section by section, to ensure crisp and clean lines. He understood just how much I wanted my Moke to be outstanding!

Along with the brakes, other upgrades I chose included a Hi-Lo adjustable suspension kit, 13x7-inch Superlite wheels (the biggest I could find to suit the brake upgrade) and a larger alloy radiator with complementary new hoses and fasteners.

I had a few interior upgrades planned, too, so I sourced a new Vinwire wiring harness and had a bikini canopy made for those occasions when we needed some protection from the elements. But, to be honest, I wasn’t planning on taking the Moke out if the weather looked too grim. 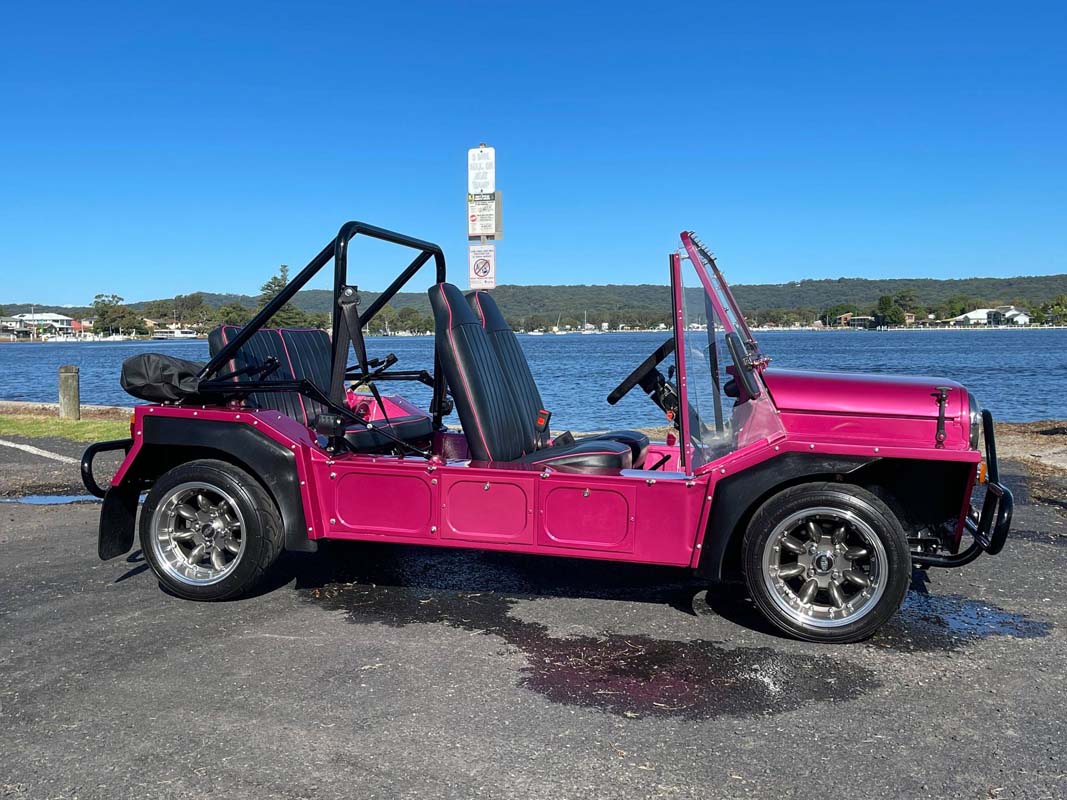 Modern Touches – and a little bit of Italy

Inside, I fitted tombstone front seats, trimmed in black leather with contrasting pink piping and stitching, with the same finish for the low-back rear seats.

Original-style tubular rubber floor mats were added front and rear and the instrument panel has an original look, too, but the white-on-black Smiths gauges include a programmable 200km/h speedo.

The sound system is a Fusion MS-RA55 Bluetooth unit that’s marine-grade, so it’ll handle some rain spray if it comes to that. Same goes for the speakers, which are Fusion XS Series 6.5-inch 200-watt units, fitted into boxes I designed myself.

A Fusion MS-RGBRC controller allows remote adjustment of the sound system, so front and rear seat passengers can take care of the tunes while I’m driving. 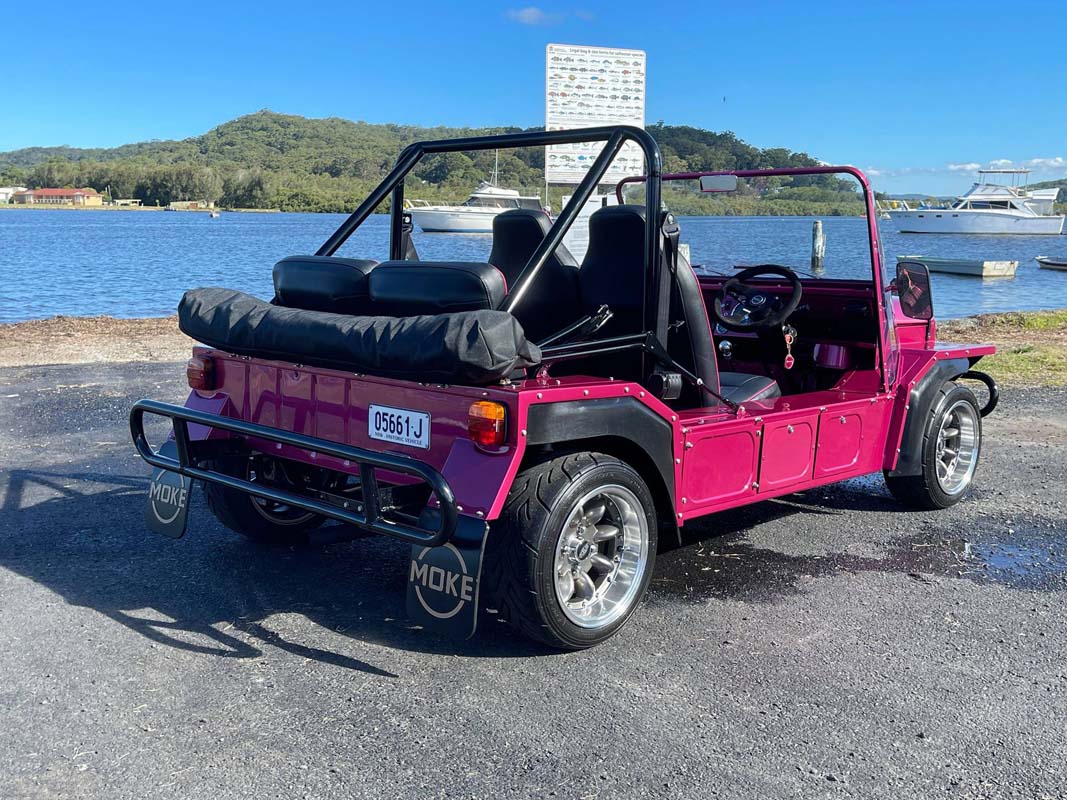 I also opened up the sponsons on both sides, adding hinged and lockable covers to provide some storage for phones as the like, as in-car security on a Moke isn’t exactly great!

The finishing touch inside was the Sparco steering wheel, which I sourced direct from Italy - well worth the 5-month wait! 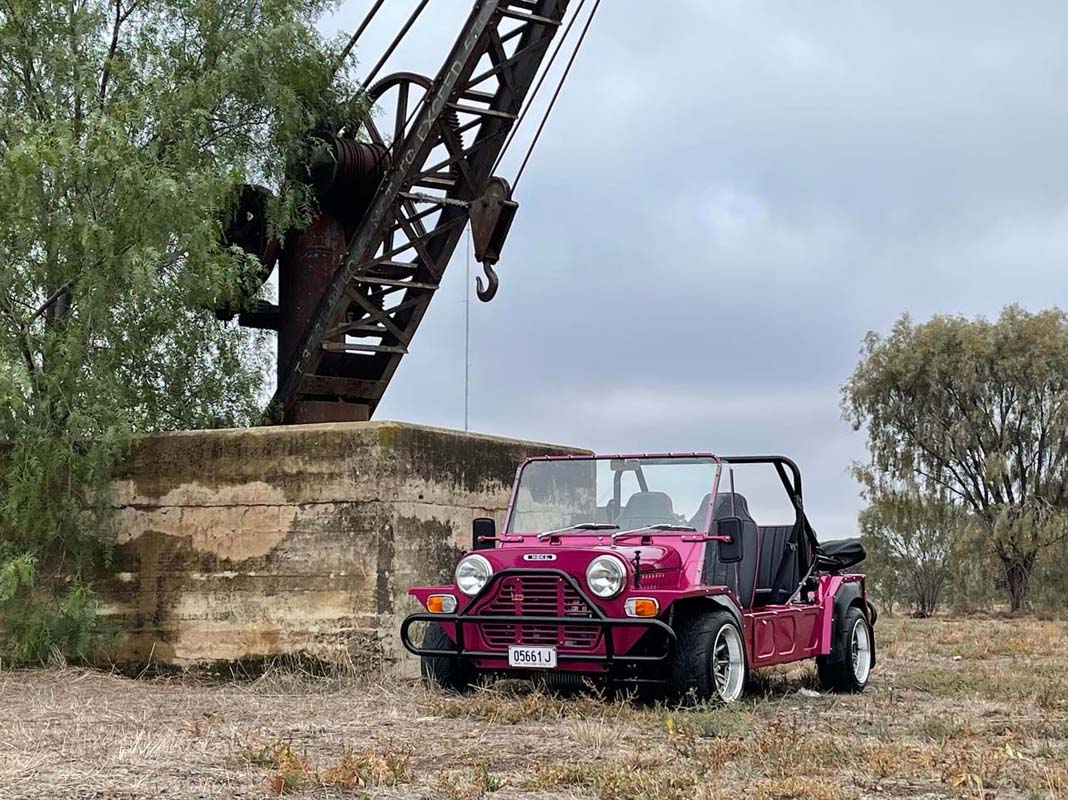 In December of 2020, after three years’ work, my pink 1979 Moke Californian was complete and ready to register.

I’ve never felt so satisfied in my life to have built my very own car using my own two hands. I encountered so many hurdles and there were times when I thought I wouldn’t be able to get it done, but I – I should say ‘we’ - did! 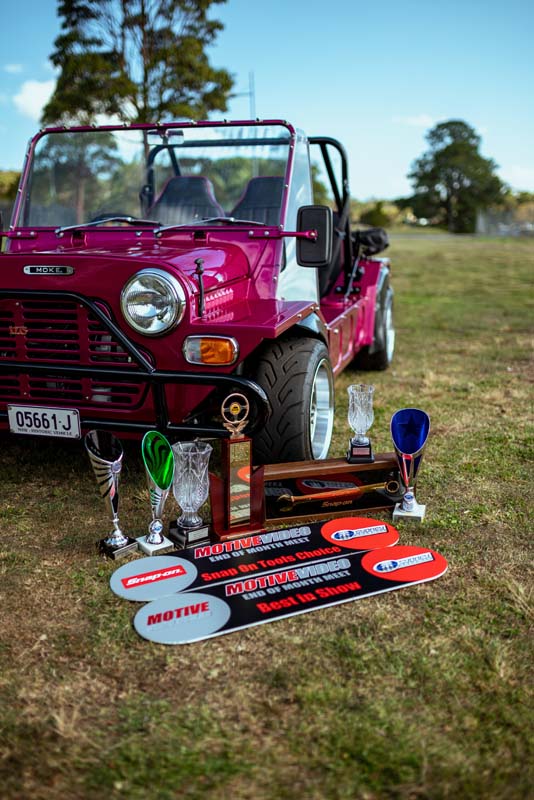 Road-ready and carrying historic registration with the Mini Car Club of NSW, my Moke’s very first show was in March, 2021, where it also won its first trophy. To say I was proud was an understatement and I ensured that trophy had a front seat for the entire journey home!

Since that debut, my Moke has attended five car shows and won seven trophies. This included a rare golden spanner from Snap On Tools for ‘Best in Show’ at a Motive End of Month Meet at Eastern Creek. The guys from Snap On said my car is only the fifth to be so awarded, so that was pretty special. 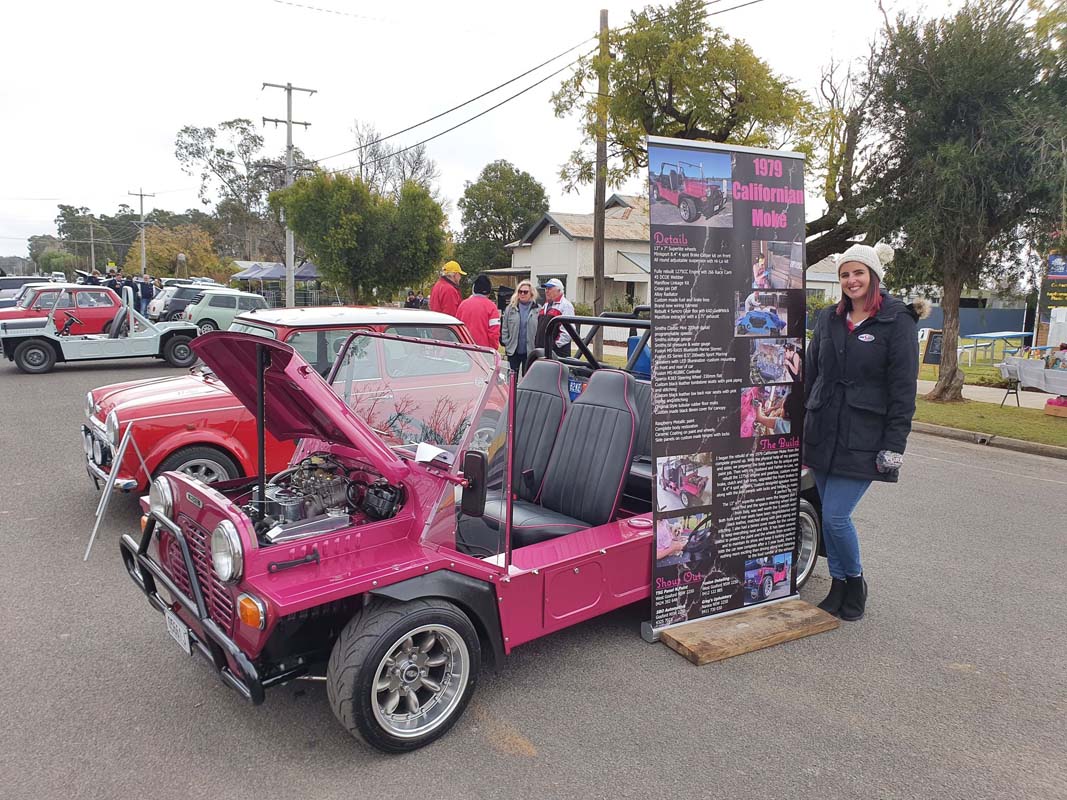 I also won ‘Best Moke’ and ‘Best in Show’ at the Australian Hay Mini Nationals in 2021 which was some reward for the fact we travelled ten hours to get there.

Given how much time, money, sweat and tears I put into this Moke, I’m determined to get out there and drive it as often as my club rego will allow.

For me, there’s nothing more exciting than driving along and listening to the loud rumble from the exhaust!

Along with my husband Kyle, father-in-law Graham, sister Maddy and the rest of the extended family, there are others who helped bring my Moke from a rusty shell to a raspberry ripper. 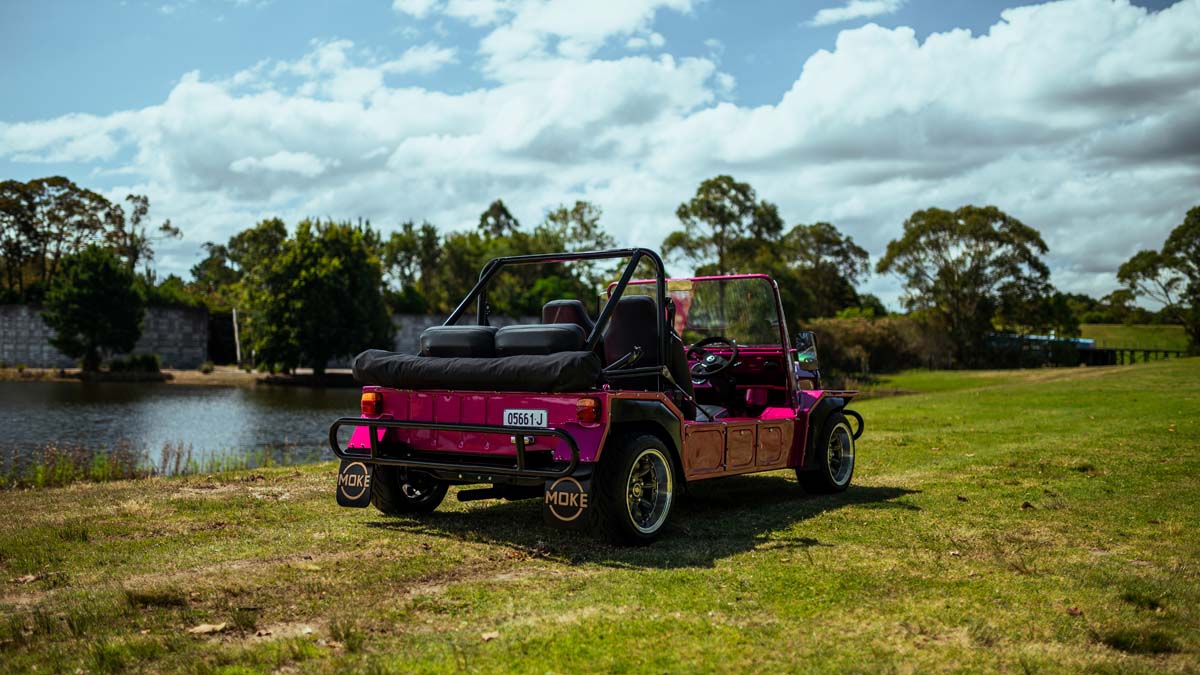 Ceramic coating on paint and wheels

Adjustable suspension all round with Hi-Lo kit 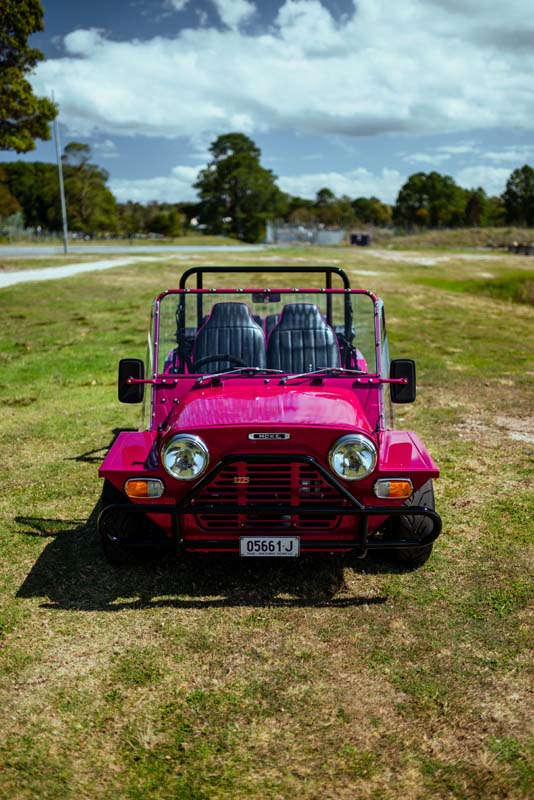