In recent years, collectable car auctions have been dominated by classic Ferraris. Newer examples of the Maranello marque have been fetching big dollars, too, along with post-war exotics from other Italian manufacturers, Mercedes-Benz and Aston Martin. In the pre-war sphere, vintage Bentleys, Duesenbergs and Mercedes dominate, with Alfa Romeo and various coachbuilt specials up there, too. 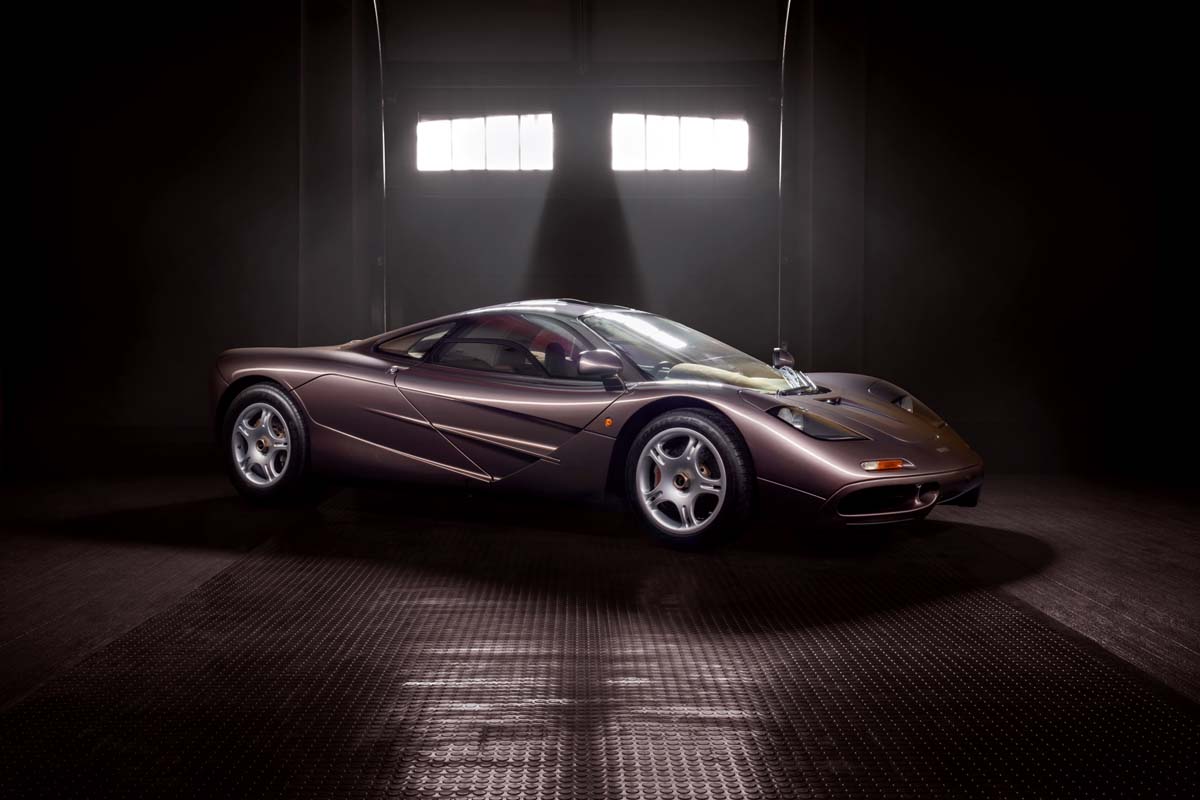 Cars from the past thirty years, however, rarely achieve the eight-figure sums that their predecessors from the classic era do. That changed in 2021 when a “modern” automobile sold for a record and achieved the highest price for any car publicly auctioned in the calendar year.

That car was a McLaren F1. 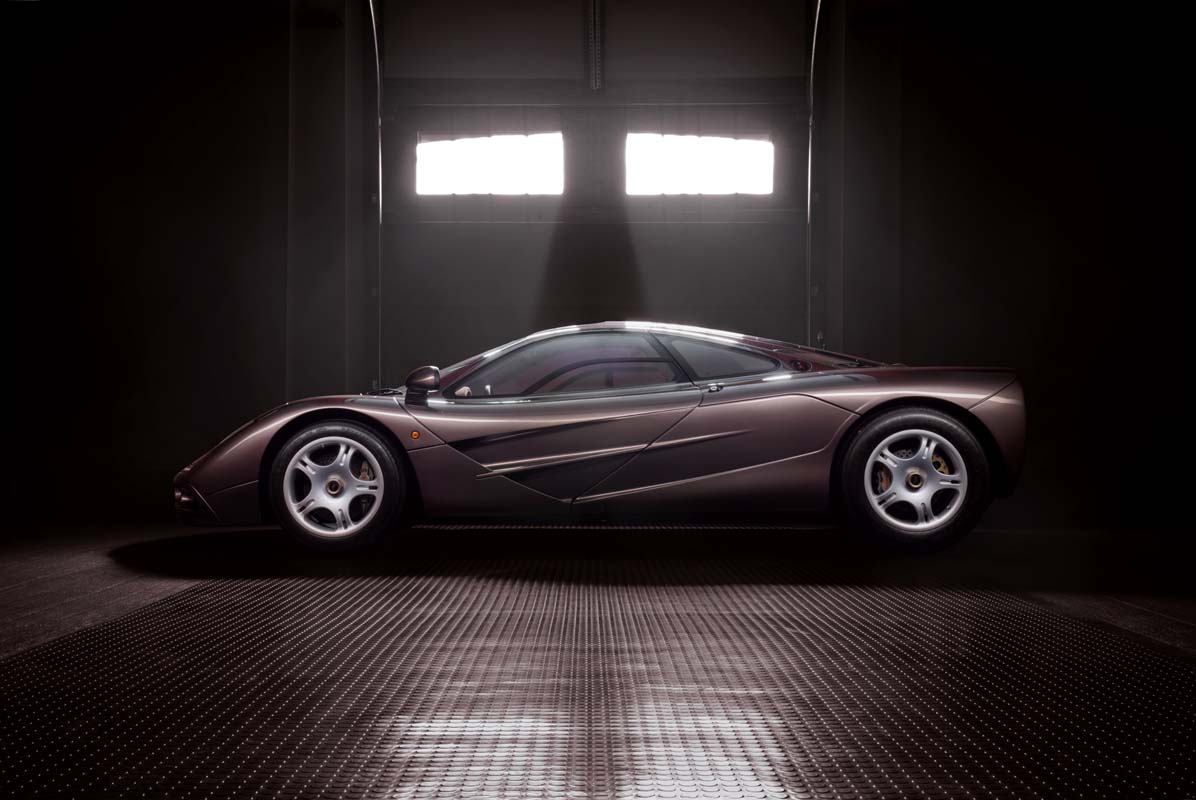 The F1 has its roots in the late 1980s, when key members of the McLaren Formula One team decided to transfer their race car expertise to a road car. The initial sketches were done by McLaren’s chief engineer, Gordon Murray, who had joined the Woking-based firm from Brabham.

Murray presented his ideas to McLaren’s joint owners, Ron Dennis and Creighton Brown, who were agreeable to the idea and set up ‘McLaren Cars’ in 1989.

Combining the familiar with the innovative, the first product of McLaren Cars had performance at its heart, but would be practical, too – at least in C1990s supercar terms.

Dubbed ‘F1,’ the McLaren would be the first road car to feature a full carbon fibre chassis, with titanium, magnesium and Kevlar employed in other areas to provide strength without adding weight.

The exterior design, by Peter Stevens, was simpler and more elegant than most other supercars of the era, with its shape not only dictated by aerodynamics, but also the need to ensure abundant cooling air could reach the mid-mounted engine. That engine would be brought in, though. 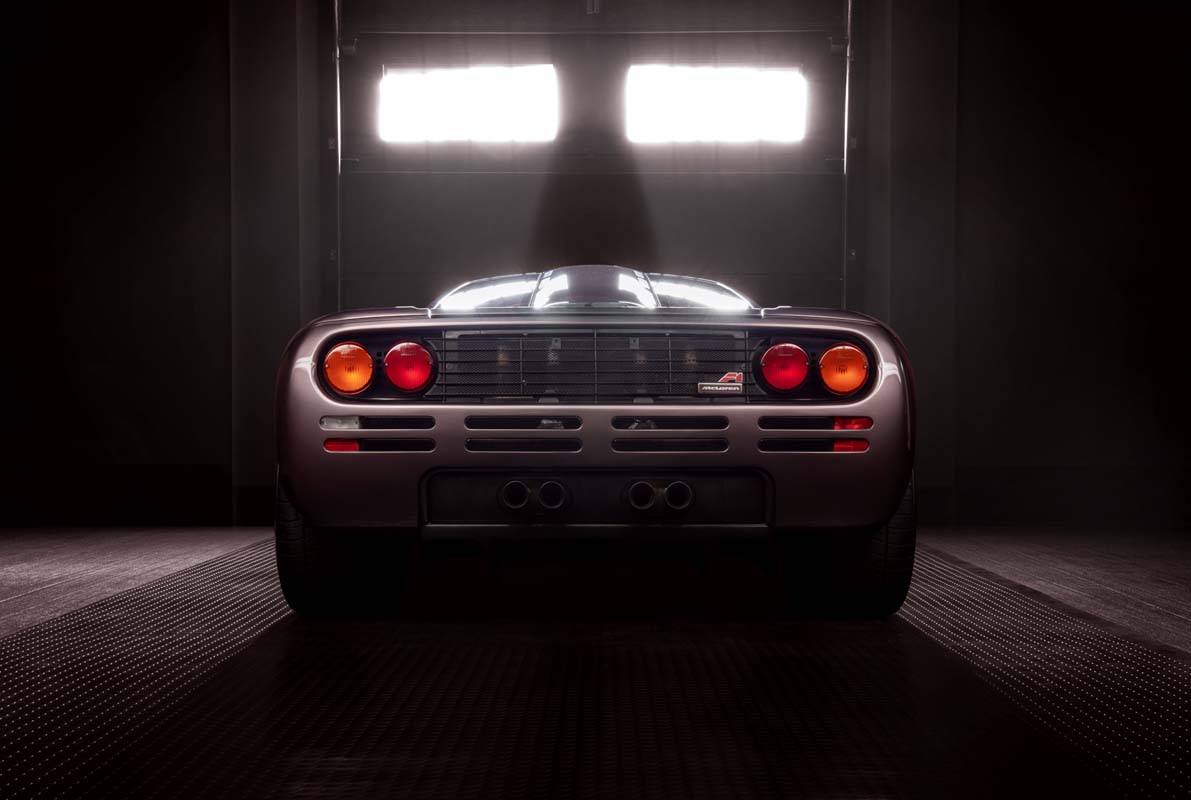 In the late ’80s, McLaren’s Formula One race cars were using Honda engines, but these would not be suitable for road use. Murray determined the F1 project needed a large V10 or V12 that was light and capable of 550+hp, but Honda would not build such an engine for McLaren. As such, Murray had to shop around, eventually finding a collaborator in BMW, specifically their ‘M’ motorsport division.

The end product of that collaboration was a 6.1-litre all-alloy V12. Apparently, one of Murray’s non-negotiables with the engine was that it had to be naturally-aspirated, rather than relying on turbocharging or supercharging for its power. The BMW V12 fitted that requirement, and although it came in above Murray’s planned weight limit, the 627hp (467kW) on tap without further tuning was far more power than the original goal of 550hp.

The engine drove the rear wheels only through a transversely-mounted six-speed manual gearbox that also made extensive use of aluminium in its construction – even on the flywheel.

An interesting addition to this engine was gold foil, which was used in specific areas to reduce heat transfer; an important consideration in a car where the V12 sat just behind the cabin.

The F1’s cabin would be just as innovative as its underlying structure, thanks to a three-seat layout with the driver front and centre, flanked by the two passengers, whose seats were set further back.

Ferrari’s ‘Tre Posti’ 365P Berlinetta Speciale from 1966 had used a similar layout, so Murray’s central placement of the driver was not new, but the Ferrari was essentially a coachbuilt special and not a production car as the F1 would be.

Driver and passengers entered the cabin through large dihedral doors and were greeted with a space that was not racecar-stark, but rather well appointed and furnished with soft carpet and leather-trimmed seats.

Central locking, air conditioning, electric windows, windscreen demister and a 10-disc CD stacker sound system were also standard. The latter had been developed specifically for the F1 by Kenwood to be as light as possible. Fitted luggage was also provided, housed in compartments above the rear wheelarches. 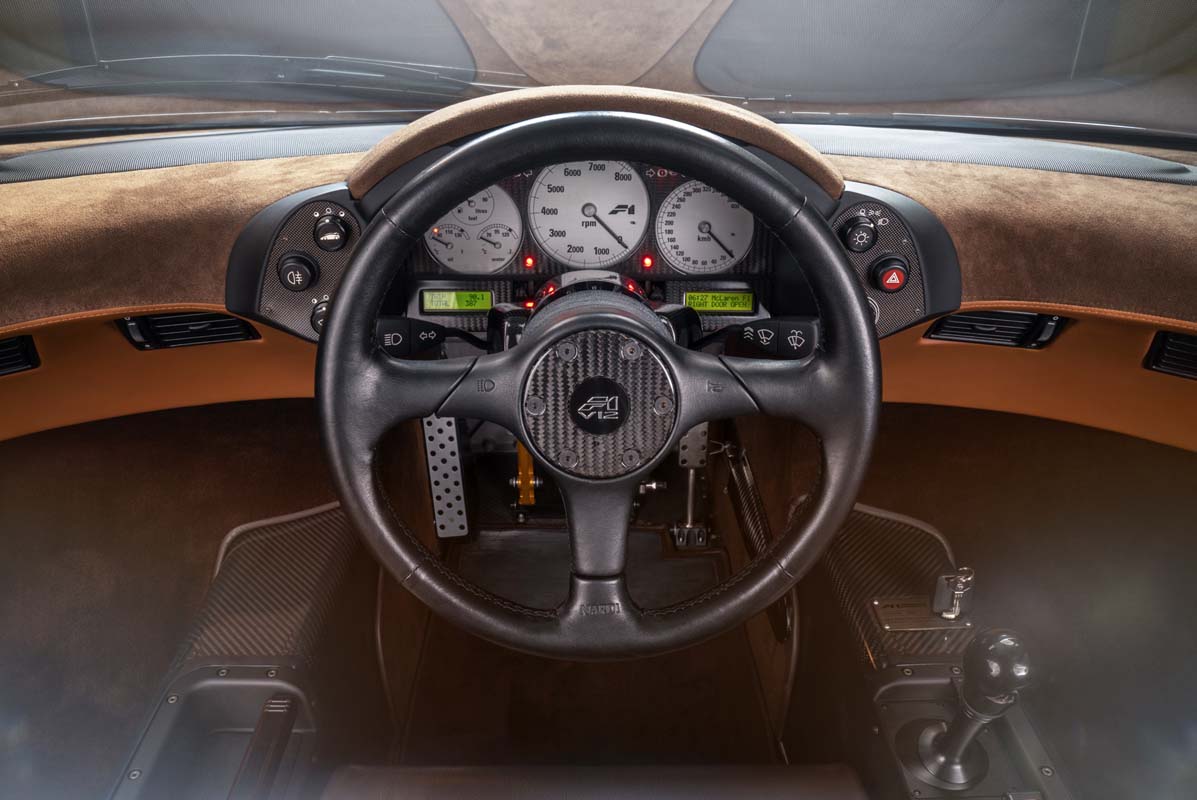 Other elements included bespoke lightweight double wishbone suspension all round, lightweight wheels and specially-developed tyres. The brakes, however, were relatively low tech, being conventional cross-drilled and vented steel discs, matched to aluminium calipers from Brembo and with no power assistance. Apparently, Murray had wanted to employ carbon fibre brakes, but this technology was still in its infancy at the time, so not deemed suitable for a car where reliability was to be one of the key points.

Despite all its concessions to comfort, the finished F1 was still blisteringly fast, capable of 0-100km/h in 3.3 seconds and reaching 160km/h from standstill in the time it took some rivals to reach half that speed.

Top speed was electronically limited at 231mph (371km/h), but with this removed, as much as 243mph (391km/h) was possible. Regardless, the F1 officially held the record for the world’s fastest production car from 1998 to 2005. That top speed was such that McLaren could find nowhere in the UK to test it; instead sending a prototype to the Nardo test track in Italy. 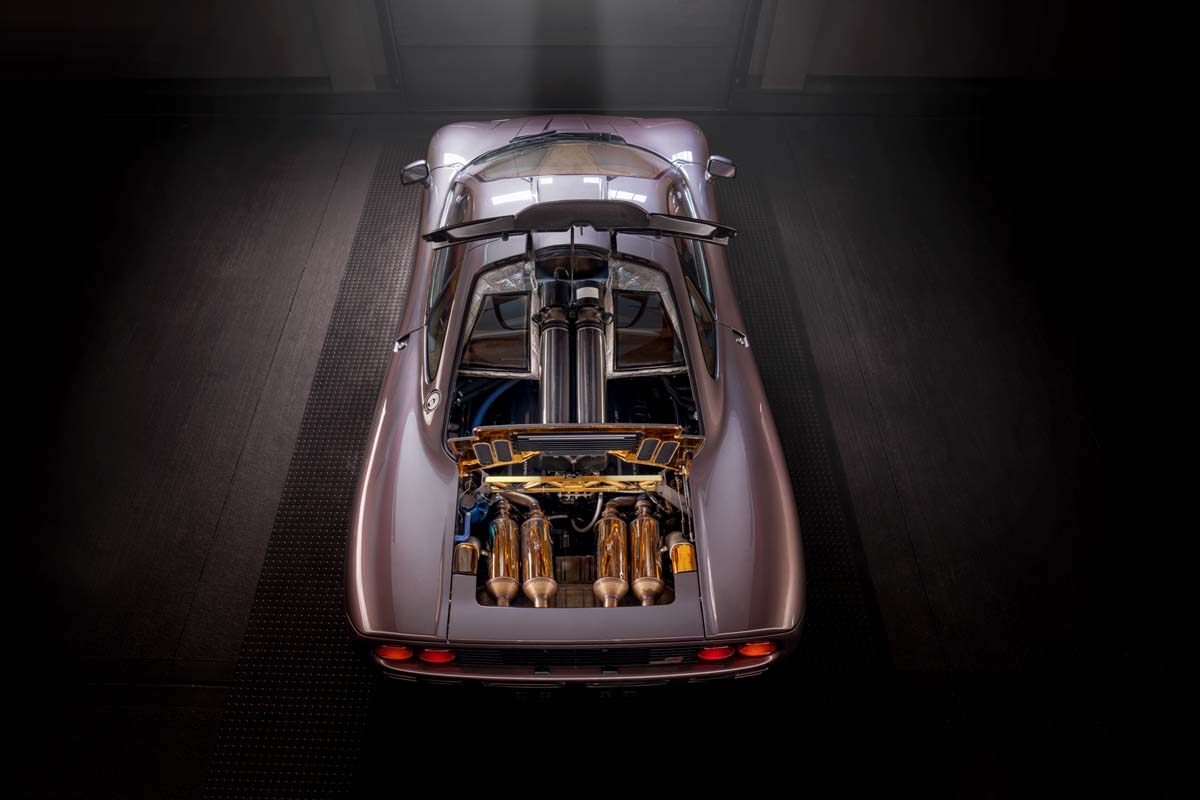 Production of the F1 commenced in 1992, with the first examples reaching customers in 1993. While conceived and built solely as a road car, customer requests led to the development of a tuned version for racing, the ‘LM’ (for Le Mans), followed by a more overtly competition variant, the GTR. The latter would win the 24 Hours of Le Mans on debut in 1995, taking four of the top five places that year.

In total, only 106 F1s were manufactured, with 64 of these being the standard road car. The starting price of £540,000 in 1993 (AU$1.2 million back then, the equivalent of AU$2.35 million today) ensured a very limited customer base and it’s alleged that, despite this whopping price tag, McLaren lost money on the F1 project.

Like many supercars of its era, the McLaren F1 has grown in stature – and price – as the years have passed.

Unsurprisingly, million-dollar amounts are the norm, but until recently, values have rarely exceeded seven figures. It’s also interesting to note that, unlike older cars, F1s with competition history have sold for less money than the road cars. 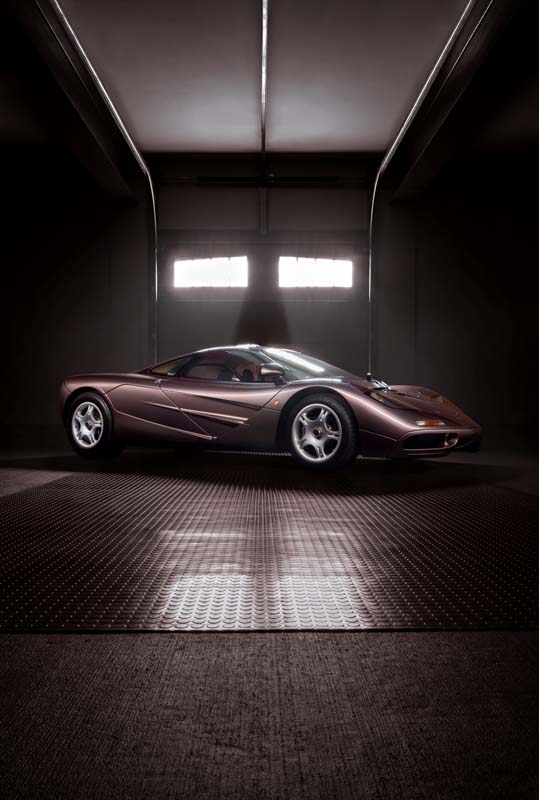 Given that upward trend, the appearance of another 1995 F1 this past August, with extremely low miles and a one-off paint scheme, drew lots of attention.

The car in question, consigned with Gooding & Company for their 17th annual Pebble Beach Auction, was chassis #029 and spent its first twenty years in Japan with different owners, before coming to the USA in 2013. For the past decade, it had been maintained and regularly started, but never driven, according to Gooding & Company.

“The McLaren F1 is a tour de force of automotive engineering with an unmatched competition pedigree. With just over 100 road and racing F1s built, this car will grant its next owner entry into an extremely exclusive club,” said Gooding & Company’s Senior Specialist, David Brynan ahead of the auction.

As consigned, F1 #029 had 390km on the odometer and was still on its original Goodyear Eagle F1 tyres.

What makes this example unique is its ‘Creighton Brown’ paint, named after the former McLaren Cars head, who had actually left the firm by the time the F1 was released. No other F1 wore this colour, which was complemented inside with brown carpets and a mix of light tan and dark brown leather for the seats and dash.
All the standard and optional accessories were included with the car at auction, like a McLaren service book, owner’s manual, FACOM tool chest, titanium tool kit, fitted luggage, TAG Heuer watch and a copy of Driving Ambition, a book co-authored by Murray and Dennis, and described as the official history of the F1.

Given recent auction trends, Gooding & Company placed an open estimate of “in excess of US$15,000,000” for this time capsule car ahead of the 13-14 August auction.

“With its incredibly low mileage and attractive, one-of-a-kind colour combination, this particular example represents an almost unheard-of opportunity to acquire an F1 in virtually as-delivered condition. This significant car will surely compete for the top sale of the auction week,” Brynan added.

The sale price also made the F1 the most expensive car sold at auction across the whole of 2021. The next best seller for the year, a 1959 Ferrari 250GT LWB California Spider Competizione, sold for little more than half the McLaren’s US$20.5M. Coincidentally, that sale was also achieved with Gooding & Company.

So, is the sale of this McLaren F1 a predictor for growing values in 1990s-era cars? While this car may be an exception, the ‘youngtimer’ phenomenon is undeniable, so don’t be surprised if more vehicles from this timeframe start to rapidly increase in value in the coming years.

For more details, go to: goodingco.com