For more than 15 years, Castrol have been part of Tickford Racing’s success in Supercars.

Castrol’s involvement in motorsport goes back more than a century and they’ve been connected to the Australian racing scene for almost as long.

That connection has seen Castrol get behind some of our greatest drivers, like Ian ‘Pete’ Geoghegan, Colin Bond and Peter Brock. They were on board for the nascent years of the Holden Dealer Team and have been a regular sight in Australian touring car competition for decades, with the famous green and red Castrol colours gracing numerous race winners in the Supercars Championship over the years.

This year, the iconic Castrol livery features on the car from a Supercars squad that has a connection to the global lubricant specialist going back to the team's inception in 2003. 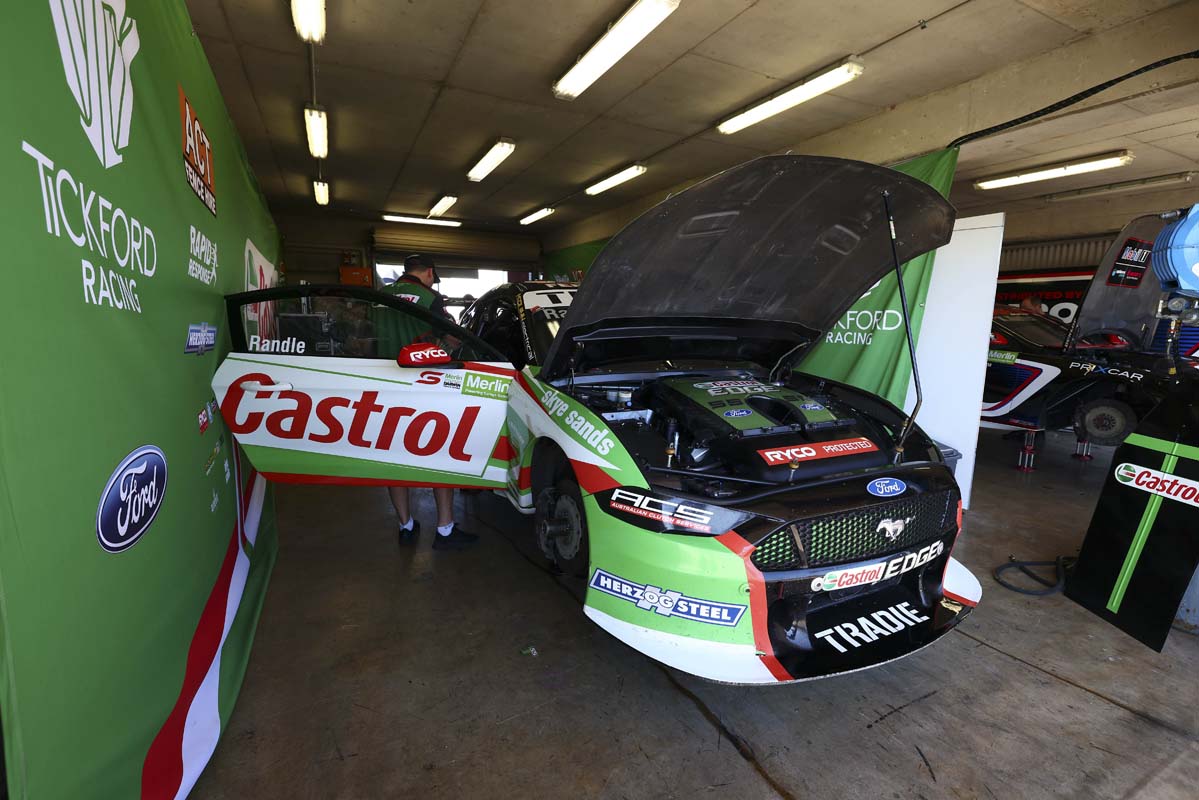 One of the most enduring partnerships in the Supercars Championship is that which exists between Castrol and Tickford Racing. For more than 15 years, Castrol has been Tickford’s lubricants partner, but it’s much more than just sponsorship and supply of oil.

Tickford and Castrol actually work together, with what Tickford learn on the track used by Castrol to develop more effective lubricants, not just for race cars, but for everyday road cars, too.

Nathaniel Osborne, Tickford Racing’s Chief Engineer, has seen how that partnership has grown in his ten years with the team. Recently, he allowed a peek behind the curtain at Tickford Racing’s Melbourne workshop and explained how the connection between them and Castrol has grown.

“Castrol have been an integral part of producing products that maximise the performance of our powertrain,” Osborne said. “They’ve been a partner with Tickford, for the entire time I've been with the team, including when it was operated under the guises of Prodrive and FPR.”

And those products don’t start and end with engine oil.

“There isn’t any other lubricant but Castrol in the cars. Our transaxle fluid, our power steering fluid, our brake fluid – it’s all Castrol – as well as the grease that we use in all our hubs, spindles and front and rear suspension.”

While engine oils and other lubricants have evolved over the years, that evolution ramps up under the pressures of motor racing.

The oil that goes into the Tickford Racing Mustangs shares some similarities with the Castrol EDGE you put in your road car, but the demands of competition mean that Castrol have formulated special blends for the team, created specifically to handle the high stress, high temperature environment of racing. Tickford actually play a part in developing those oils. 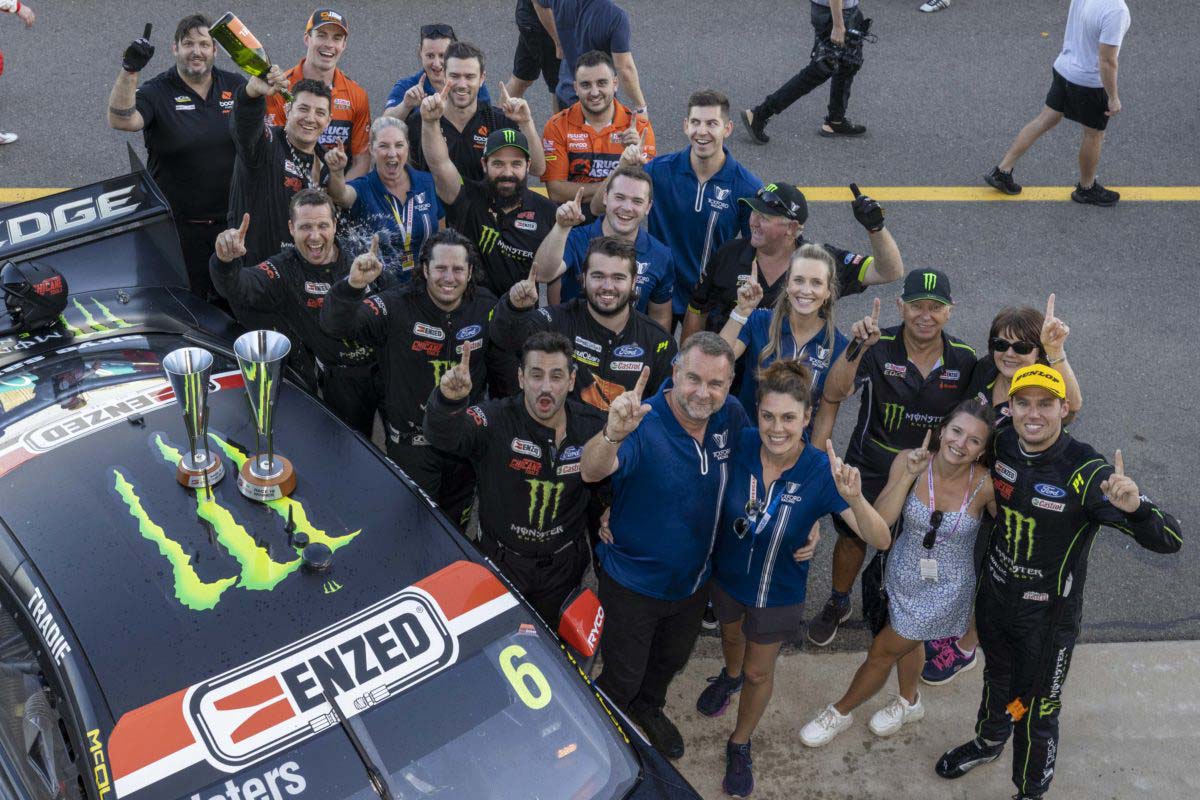 “We worked together on developing the engine oil for the current race car – it’s a joint venture,” Osborne explained. “We started with one of their base products and then we monitor wear and failures in engine cycles. I have a direct contact at Castrol that will test samples we send and tell us the wear rate of our engine.”

While this development is usually ongoing, Tickford Racing have been so happy with the current Castrol formula that it’s been unchanged for the past twelve months.

“Having Castrol available to help develop products for us to achieve our performance goals - over the life cycle of an engine build – is what makes the difference,” Osborne explained. “That’s the biggest gain for us in working closely with such a big company.”

When it comes to oil changes in the Tickford Racing Mustangs, they’re obviously more frequent than in a road car, but not as frequent as you might think.

“The oil’s able to do an entire round - we don’t need to change the oil during events. The main reason we do the oil changes is to inspect - looking for any foreign matter in the oil to identify any issues with our drivetrain or engine.”

That same approach also applies to an enduro like the Bathurst 1000, although weather conditions and other unknown factors may see fresh oil added for the race.

Those unknowns require a lot of forward planning, which Osborne says is crucial in ensuring the team is prepared for every variable – especially at Bathurst.

“There’s a lot of planning that goes into that – a lot more than people would realise. The Saturday night before the race, we’re asking ‘What happens in this scenario?’ ‘How do we react?’ ‘How do we recover if we do get caught out?’

“We don’t just rock up and take it lap by lap. We plan 15 or 20 different scenarios – what do we do and what are the outcomes if we don’t nail it.” 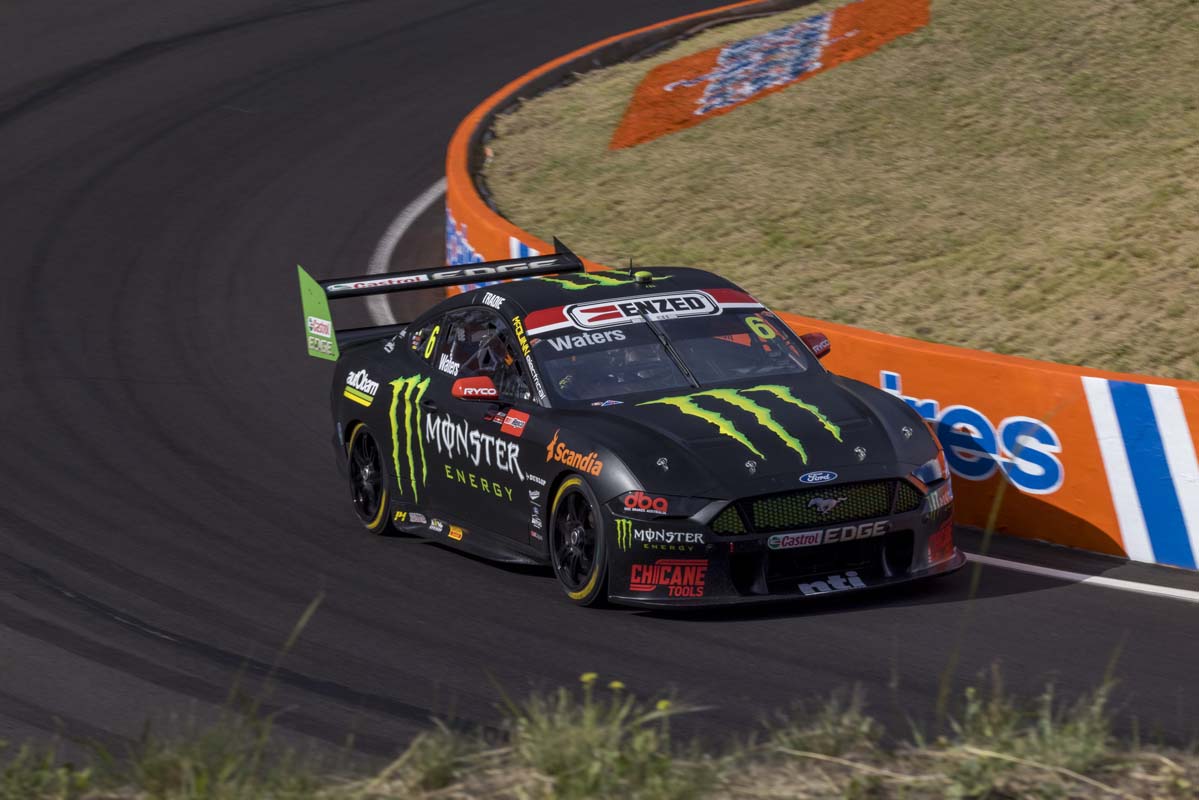 As the Castrol lubricants are good enough to take care of themselves over a race weekend, it allows Osborne and the rest of the Tickford Racing engineering crew to devote time to what are perhaps the greatest variables on the cars – tyres and aero.

“One thing that’s always at the front of our minds is tyre life, so we do our best to make sure that we’re maximising tyre performance, but not stepping over the mark and putting the tyre in danger.”

And when it comes to race car aerodynamics, more downforce isn’t necessarily a good thing.

“Talking about aerodynamics, at Bathurst in particular, you can have a car that’s quite good over a single lap in qualifying, but can be quite a poor race car. A car that’s quite high on downforce creates a good lap time, but it’s draggy, so it’s poor for straight line speed.” 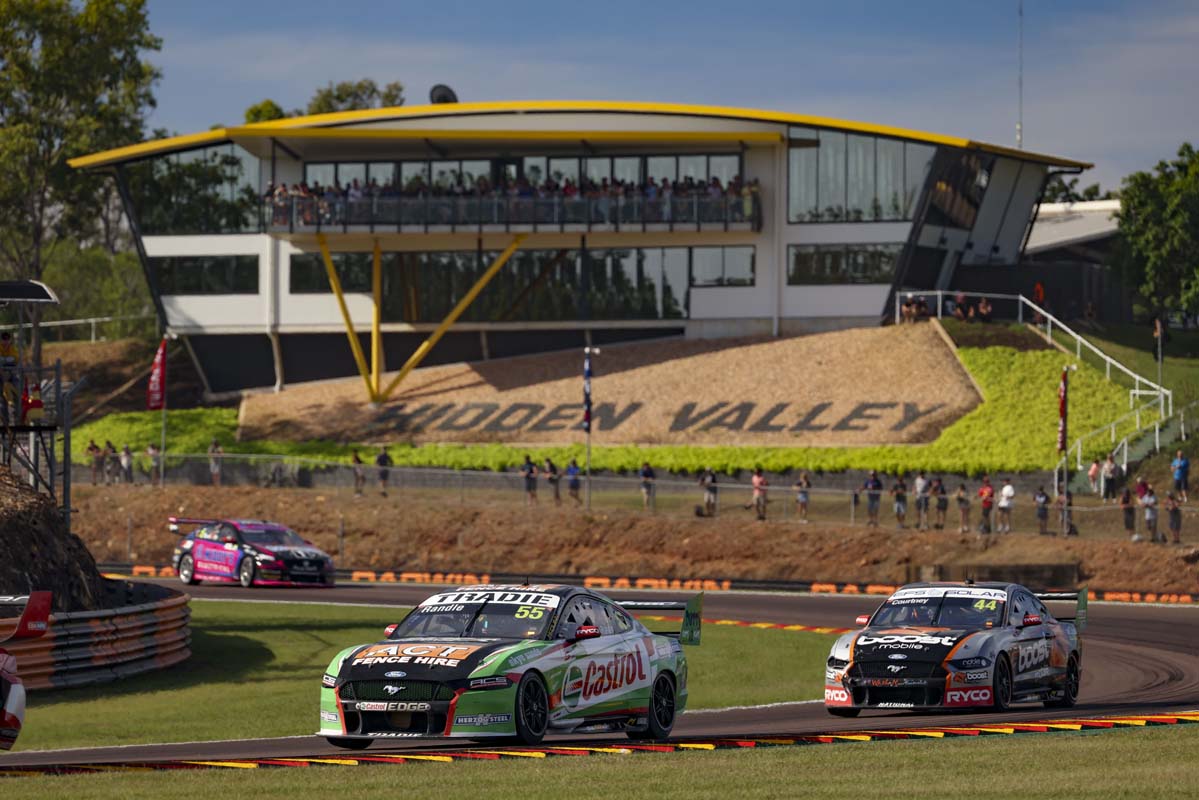 Watching the Forecast, Beating the Heat

While it seems obsessive, observing weather patterns help the team with that all-important planning: “When we wake up on race day, we’re never surprised. We’ll be ready to the same extent that the weather bureau is forecasting. So, if it’s 10 per cent chance of rain, we’ll put that much effort into preparing for a wet race. 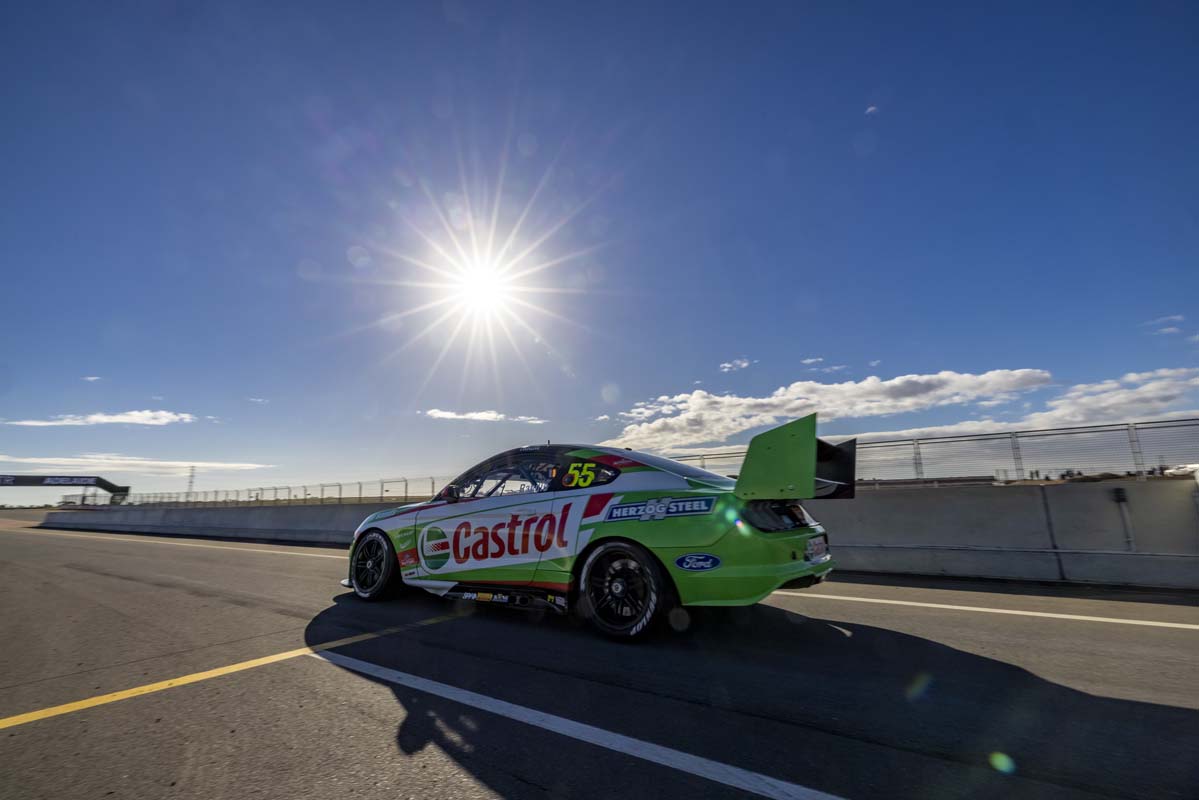 With this year’s Bathurst 1000 moved to December – its latest date ever – will the likelihood of high heat at that time of year impact the performance of the Castrol lubricants used in the cars?

“Possibly,” Osborne says. “But because of the long straights at Bathurst, you can normally get your car out of traffic into fresh air. It’s traffic that kills the cars. Racing on a street circuit, when you’re in a single file for 20 laps with no option to get fresh air, that’s when you’re in big trouble.”

Having said that, Osborne says that using specific formulas of Castrol lubricants or more frequent lubricant changes may be an option if extreme heat is a factor at Bathurst this December.

Six for the Mountain

Speaking of Bathurst, Tickford Racing’s three-car driver and co-driver lineup for this year’s Repco Bathurst 1000 includes Cam Waters, who will be joined by James Moffat in the #6 Monster Energy Mustang, while Jack Le Brocq will partner Zak Best in the #5 Truck Assist Mustang. James Courtney will share the driving duties with emerging youngster Thomas Randle in the #44 Boost Mobile Mustang.