While the 60th anniversary for Jaguar’s iconic E-Type is drawing to a close, the celebrations aren’t. In the UK this past September, some very special E-Types were brought together at a location that’s pivotal not just to the E-Type’s story, but broader Jaguar history. 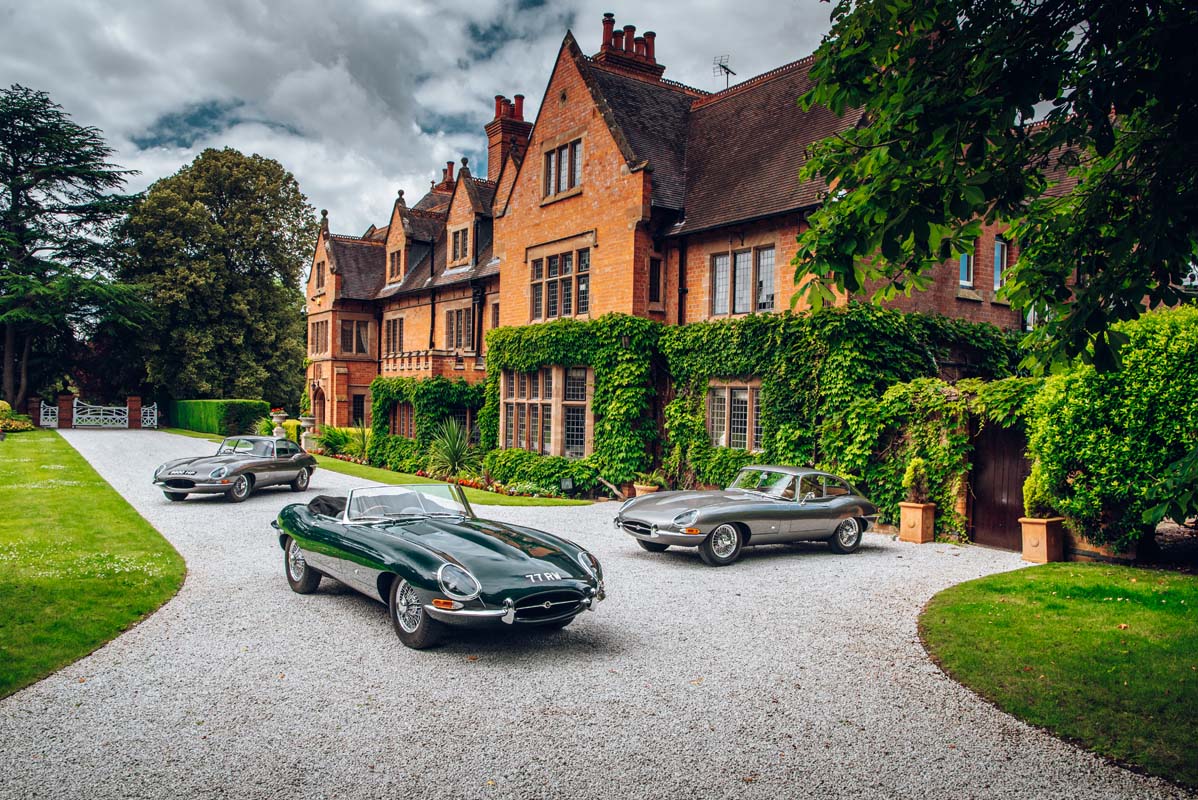 It’s often been repeated, especially this year, that Jaguar debuted their E-Type sports car at the 1961 Geneva Motor Show. With one fixed head coupe (fhc) example on static display, another fhc was sent to Geneva – driven overnight from Jaguar’s factory in Coventry – for use by the automotive press ahead of the show’s official opening. And when demand for press drives exceeded supply, another E-Type, this time a roadster, was dispatched from Coventry with equal haste.

While the static display car was unregistered, but identified by its chassis number, 885005, the two road-registered cars driven to the show have become somewhat legendary in Jaguar history. The fhc was UK registered as ‘9600 HP,’ while the roadster bore the registration of ‘77 RW’. Both cars have been reproduced in limited-edition form by Jaguar Classic this year and 9600 HP is considered so significant, it’s had an entire book devoted to it.

After their Geneva debut, the three cars passed through several owners and would lead varied and interesting lives. This year, the trio were reunited at Wappenbury Hall in the UK, the former home of Jaguar co-founder, Sir William Lyons.

That’s significant in itself, as many new and in-development Jaguars were sent to Wappenbury Hall for Lyons to assess. For publicity purposes, new Jaguars were often photographed in front of the grand home, too. However, the three Geneva E-Types are believed to have never been on the grounds together – until this year.

Fittingly, all three were gathered and photographed in early September, just ahead of what would have been the 120th birthday of Lyons, who passed away in 1985.

Birth of the E-Type

The E-Type that was unveiled in 1961 was the continuation of a Jaguar sporting car lineage that had started with the XK120 more than a decade earlier.

As a replacement for the XK150 (that had been released in 1957, replacing the XK140, which in turn replaced the XK120), the E-Type took some of the best elements from that model, as well as what Jaguar had learned with their D-Type racer that had won the 24 Hours of Le Mans three years running from 1955. That included the D-Type’s monocoque body with front subframe to mount the engine, front suspension and steering.

While William Lyons rightly gets much of the credit for the E-Type’s creation, the actual design of the car was the work of Malcolm Sayer. Despite being more focussed on mathematics than aesthetics, Sayer's design has come to be regarded by many, including Enzo Ferrari, as one of the most beautiful cars ever.

The low, sleek body shape featured an ultra-long bonnet, which terminated in tunnelled headlights behind glass shields, a narrow grille opening and bumperettes that were more decorative than functional. 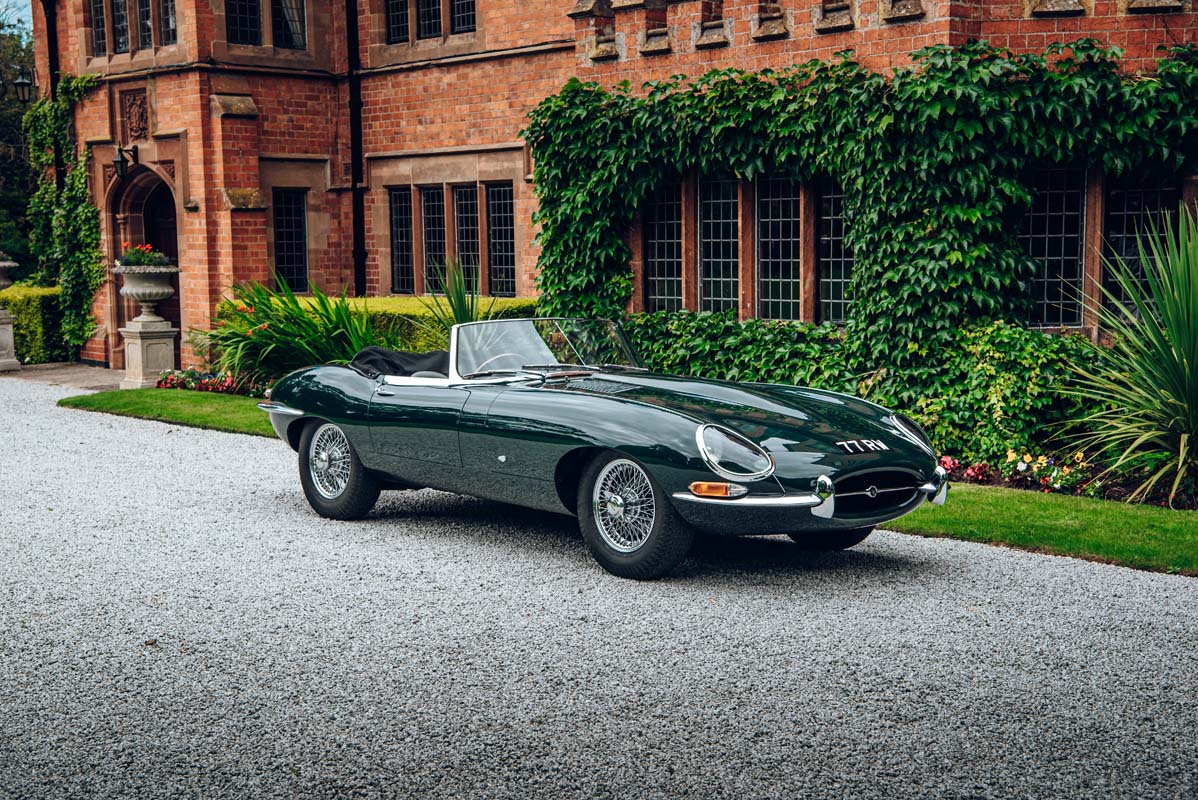 Available fixed head coupe and roadster body styles were equally elegant, with the fastback rear of the fhc particularly well incorporated. Being a sports car, both variants were 2-seaters only.

Under its svelte skin, the E-Type featured the familiar 3.8-litre six-cylinder engine from the XK150, in 265hp (198kW) form. A 4-speed manual was the sole transmission offered and arguably the E-Type’s weak spot. A limited slip diff was standard, but overdrive and an auto transmission weren’t available, even as options. 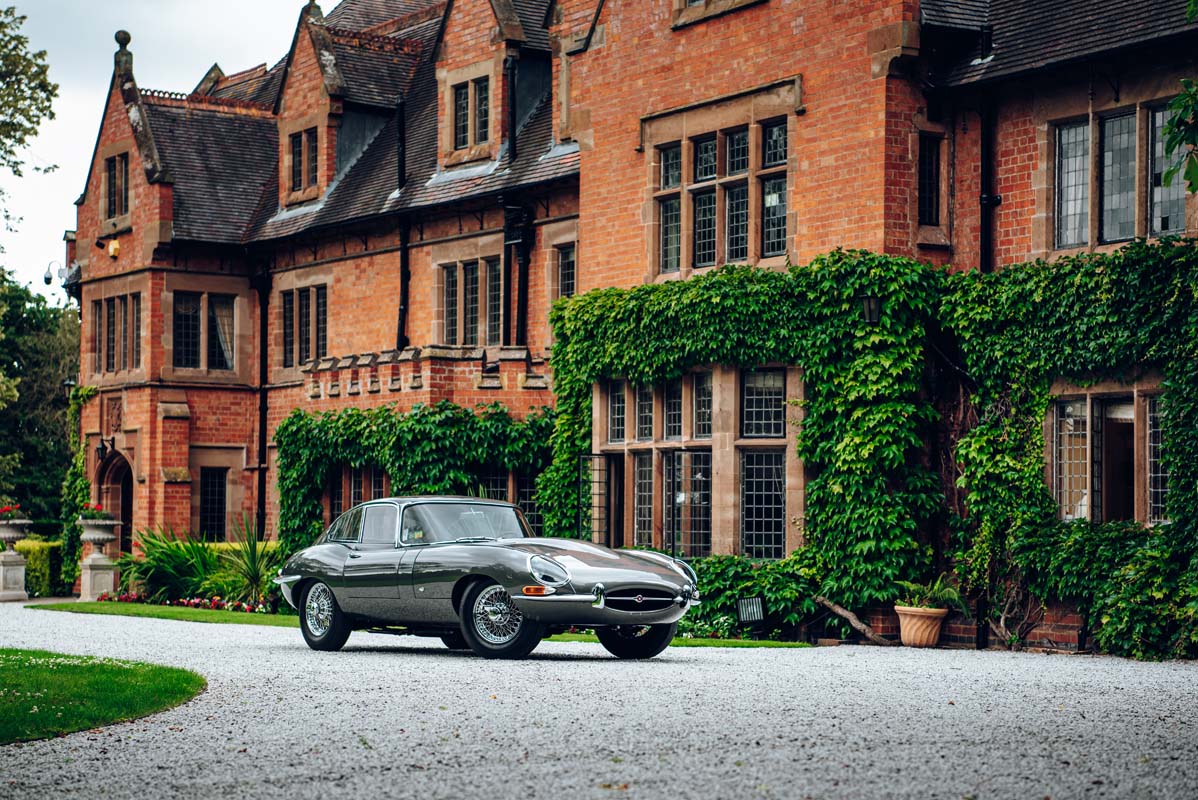 There were disc brakes all round and suspension was fully independent (both pretty revolutionary for 1961), made up of torsion bars at the front and coilover shocks at the rear.

A goal when developing the E-Type was for it to produce 150mph (241km/h) and while the production cars fell a little short, close-to-150mph was still very impressive for a road car.

In this original form, the E-Type remained in production until 1964, when a 4.2-litre engine was introduced. While offering no more power, the larger six did produce more torque. There were improvements in other areas, too, notably the transmission (including full synchromesh), electrics, brakes and cabin comfort. 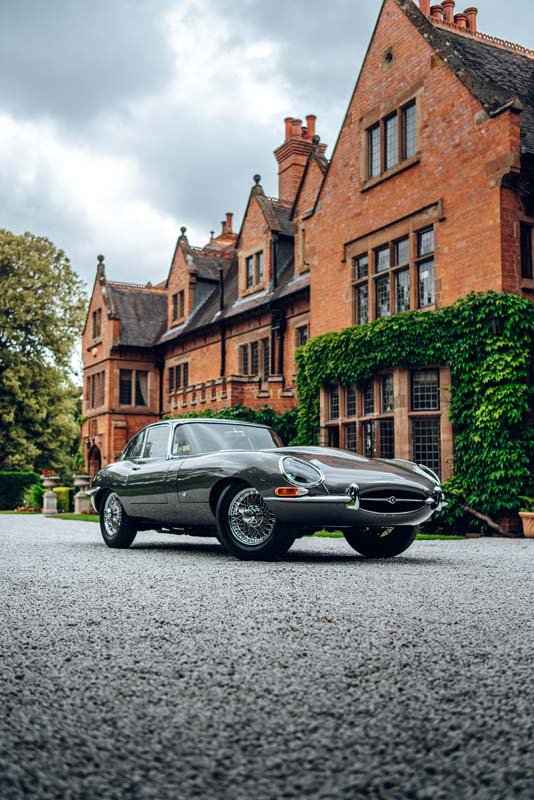 In the years that followed, the E-Type was modified – some say compromised – into more of a GT than a sports car. A 2+2 body style was introduced and automatic transmissions, air conditioning and other luxuries were offered.

Today, there’s debate amongst enthusiasts over the “best” E-Type across the recognised Series variants, but for its simple beauty, you can’t go past the original.

UK classic car specialists, Pendine Historic Cars, gathered the three significant E-Types - chassis 885005, 9600 HP and 77 RW - on the grounds of Wappenbury Hall this September as a tribute to both the car and Sir William Lyons.

“The E-Type is without doubt one of the most iconic and loved classic cars in the world,” said James Mitchell, founder of Pendine Historic Cars.

“A big part of our business is to curate car collections for some of the biggest car collectors, many of which are conducted under the radar, and as a result we have access to classic vehicles with significant provenance as well as some famous locations, such as Wappenbury Hall.”

Co-ordinating the photo shoot meant not only seeking the permission of the current owners of Wappenbury Hall, but also the respective car owners. Of the three “Geneva” cars, 77 RW is owned by Jaguar, with the other two in private hands; 9600 HP residing in the UK, while coincidentally, chassis 885005 is owned by a Swiss enthusiast.

Of the three, 9600 HP has arguably the most interesting history. What is now the oldest surviving E-Type started life as a prototype in 1960 and was originally built in left-hand drive before being converted to RHD at the factory.

Much development and testing of 9600 HP was done by Jaguar’s test driver, Norman Dewis, after which it was loaned to various UK motoring journalists for testing ahead of the Geneva launch, one of whom hit the 150mph mark – just.

On the eve of the Geneva show opening, Jaguar’s public relations manager, Bob Berry, was tasked with driving 9600 HP from the Coventry factory to Geneva. Needing to have the car on site at the Swiss city’s Parc des Eaux Vives for a VIP event, Berry drove flat out overnight. Despite numerous hold-ups and route changes, Berry got 9600 HP to Geneva with 20 minutes to spare.

Finished in Gunmetal Grey, 9600 HP differs from subsequent E-Types in that it features an aluminium tailgate and Perspex in place of the rear and rear side glass. The single bar and cat emblem filling the grille is missing, as are the front bumper overriders, while the bonnet louvres were separate pieces, welded in.

The response to 9600 HP saw Jaguar instruct Dewis to drop everything he was doing and bring a second E-Type to Geneva to meet demand for demonstration drives.

That second car, a roadster in British Racing Green and registered 77 RW, was also driven overnight from Coventry to Geneva.

Ahead of the E-Type’s 60th Anniversary this year, Jaguar Classic announced the ‘E-Type 60 Edition’ programme; a set of twelve E-Type restorations in tribute to those press cars, sold as a pair of fixed head coupe and roadster.

Honouring those Geneva debutantes, the six fhc E-Types were finished in a ‘Flat Out Grey’ paint, with the six roadsters painted in ‘Drop Everything Green’. With names inspired by the stories behind each car’s dash to Geneva, both paints were specially formulated by Jaguar Classic and exclusive to the E-Type 60 Edition.

While the modern E-Type recreations are valuable in their own right, they’re not a patch on the originals, which makes the gathering organised by Pendine Historic Cars all the more special.

“We wanted to have some fun and create some images of the vehicles reunited at this brilliant home to give something back to the owners of the three cars, as well as something to make E-type fans all over the globe smile,” Mitchell added.