Porsche restoration specialists Singer have built a tribute to the Stuttgart marque’s glory days in rallying.

Singer has only been in the automobile industry less than 15 years, but they’ve made a serious impact in that short time, becoming synonymous with high-end Porsche 911 restorations and premium Porsche 911-based custom creations.

“We at Singer are motorsport nerds and demonstrating our understanding of the discipline required our off-road vision to display deeply legitimate competition credentials, from the structural engineering, to the bodywork ethos, to the mechanical package,” said Rob Dickinson, Singer’s Founder and Executive Chairman, of what went into the ACS.

The build actually came about at the request of a long-term Singer client, who wanted an air-cooled 1990 911 (Type 964) reimagined as a tribute to Porsches that competed in the World Rally Championship and Dakar in the “golden era”. 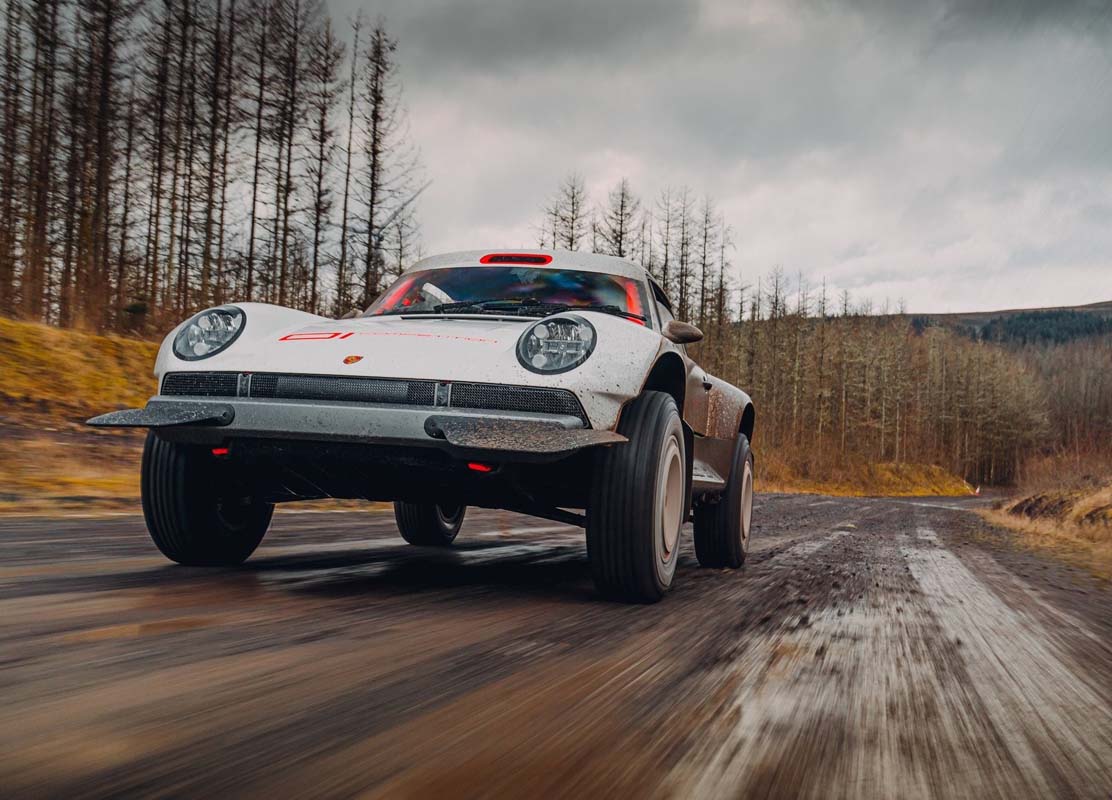 “We’ve taken particular inspiration from the iconic Rothmans-sponsored 911 SC/RSs and 959s that conquered events like the Qatar International Rally and Paris-Dakar in the mid-’80s,” Dickinson added. “And, at the request of our client, have reimagined these all-terrain 911s in their honour while utilizing fresh perspectives and state of the art know-how.”

The client actually commissioned two cars – one to compete in high-speed desert rallying, like the Baja 1000 and Dakar Rally, so it needed to demonstrate “extensive all-terrain capabilities”. This became the All-terrain Competition Study. The second 911 would be a road-biased rally car, “configured for high-speed, high-grip tarmac events”. 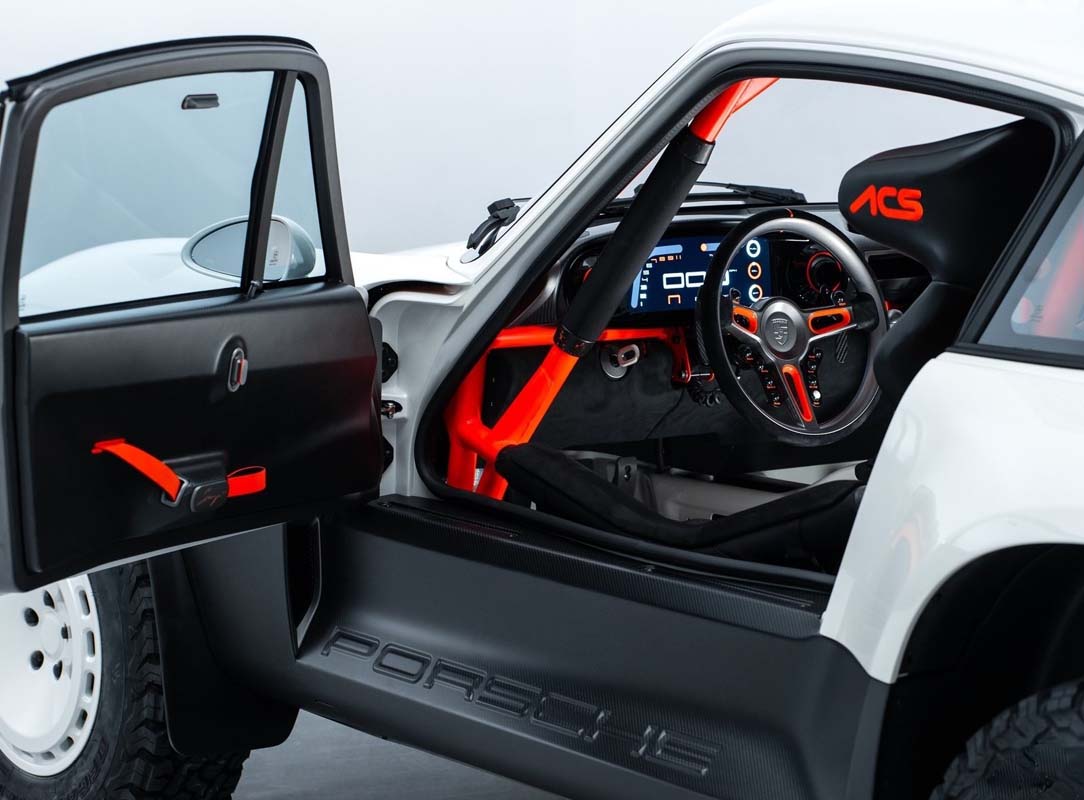 As the brief made clear, both creations needed to be functional, with what was done on these cars also used to demonstrate the 911’s off-road capabilities to other Singer clients.

Team up with Richard

While Singer’s specialty has been fast and fiery 911 road cars, the requirements for a bona fide off-road competition machine are different, and somewhat outside of Singer’s skill set, so Dickinson and his team partnered with UK-based 911 rally specialist Richard Tuthill to ensure the ACS would be capable in heavy-duty competition.

As well as Porsche restorations, Tuthill prepares Porsches – mostly 911s – for historic competition, ice racing and marathon rallies like the Peking to Paris. Amongst their successes over the past few decades, Tuthill-prepared cars have won the East African Safari Classic Rally (a classic rallying event in Kenya and Tanzania) four times. 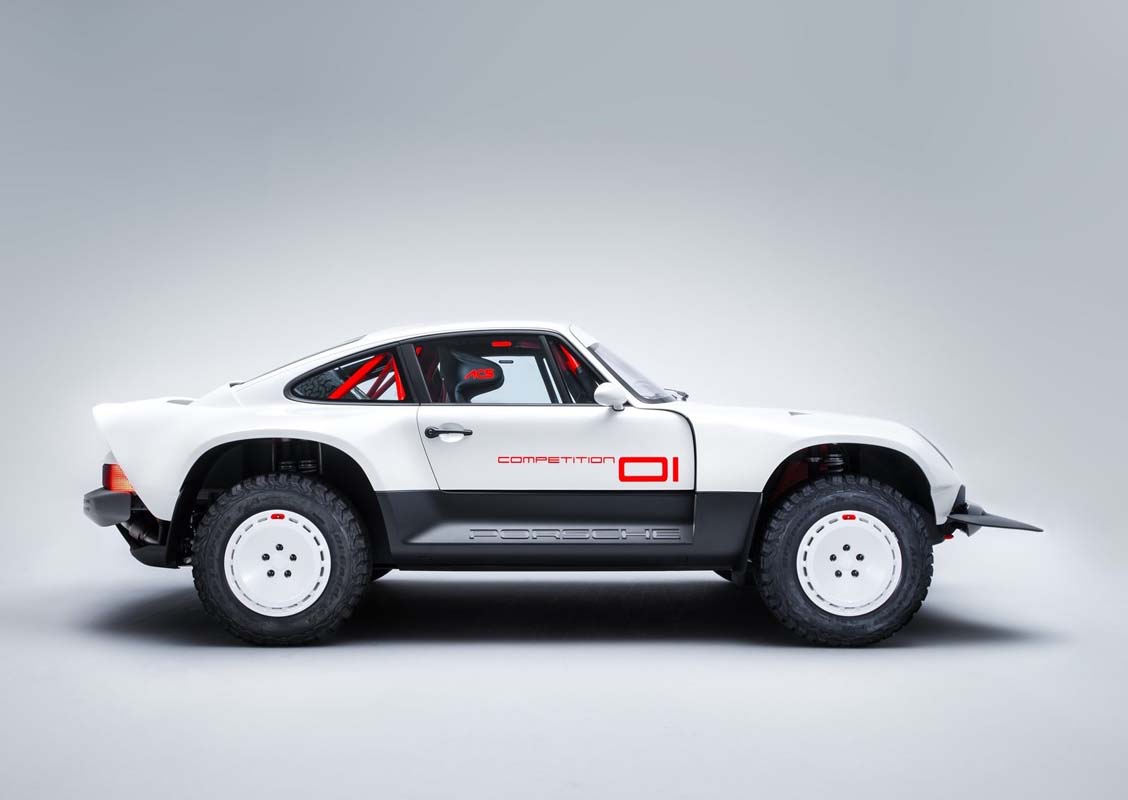 “In the 1980s we partnered with Prodrive to prepare bodyshells for the Rothmans 911 SC/RS that was part of the inspiration for ACS,” Tuthill stated.

“This collaboration brings together the best of innovation, cutting-edge technology and decades of real rallying experience into one, amazingly capable, all-terrain off-road racing vehicle.” 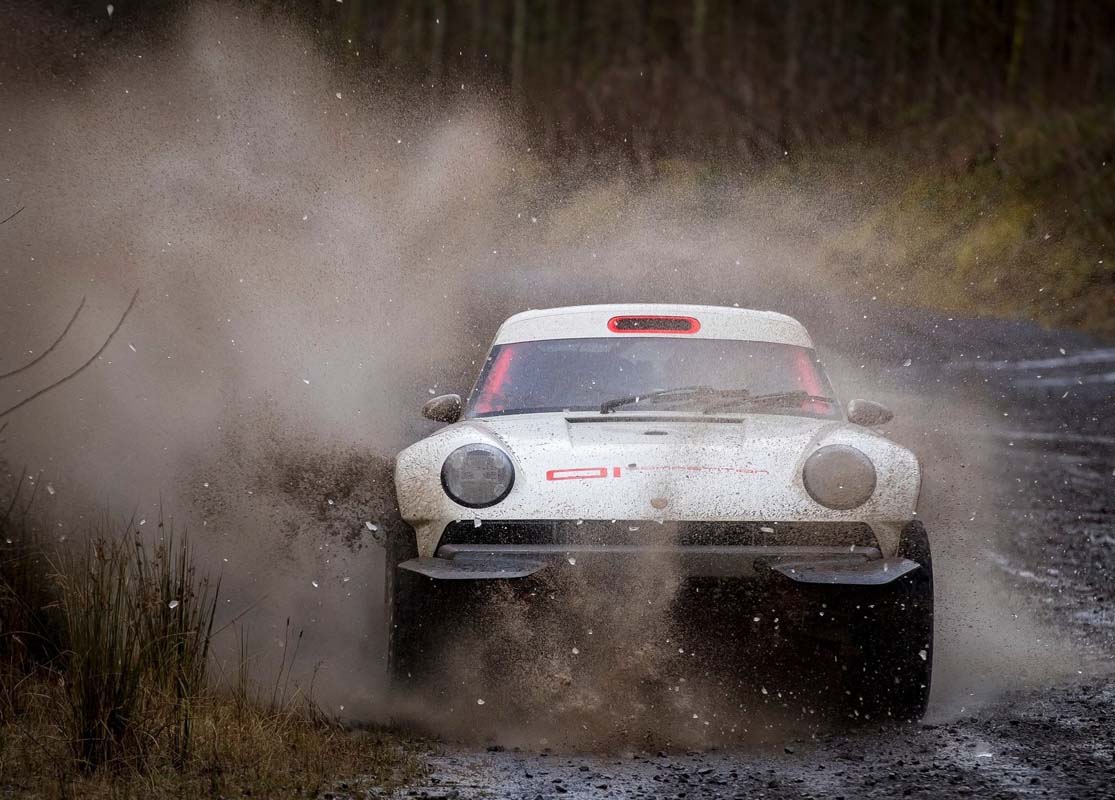 While the design was done largely out of Singer’s California headquarters, the build of the ACS was conducted at Tuthill’s workshop in Oxfordshire in the UK.

To create the ACS, the extensive modifications were made to the base 1990-model 911, starting with strengthening of the monocoque body to handle the wear and tear of heavy-duty off-road use. A “dramatically increased ride height” was next, although exactly how big a lift hasn’t been revealed. In concert with this, a bespoke long-travel suspension system was fitted, comprising dual 5-way adjustable dampers on each corner.

To enable the Singer ACS to fly over rutted ground and skip over dunes, all the bolt-on body panels were replaced with carbon fibre equivalents, which were designed to enable swift replacement when in action and to allow easy underbody access when in the pits.

To put maximum power down to all four wheels, Singer and Tuthill selected a classic 3.6-litre Porsche flat six engine, with twin turbochargers, water-to-air intercoolers and individual-bank charge coolers housed within the plenum. Keeping this set-up cool is a clamshell-mounted radiator. 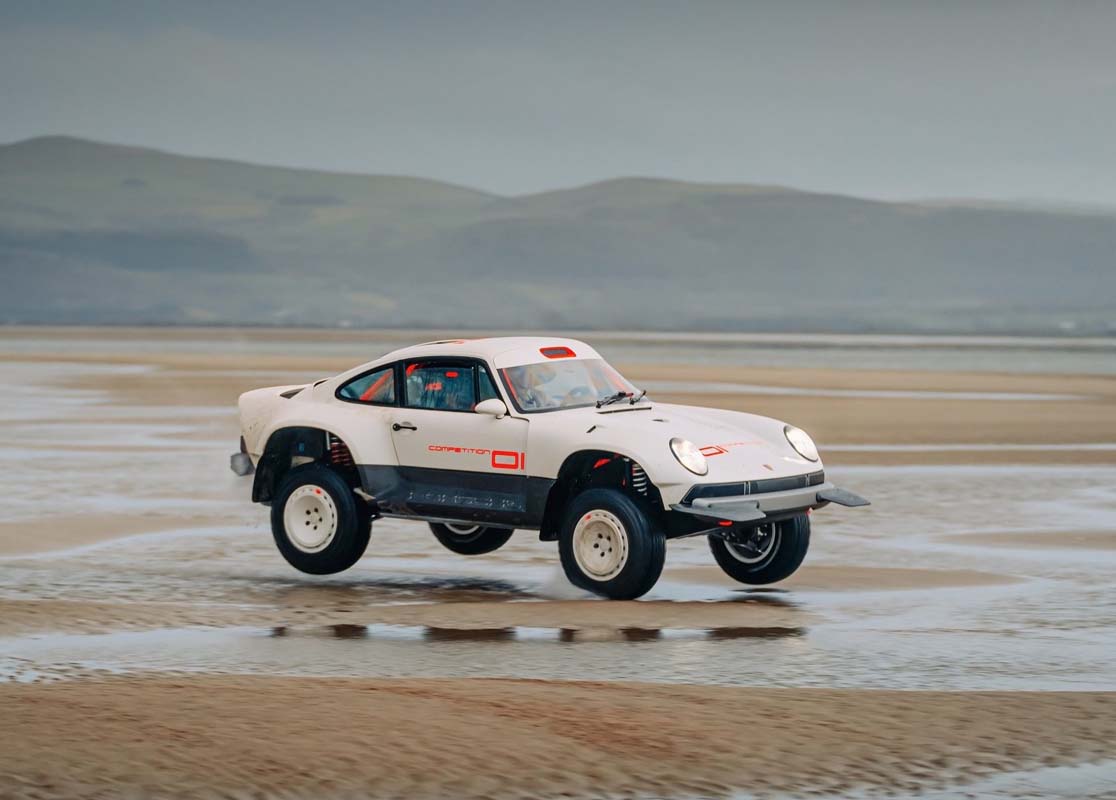 Power starts at 450hp (335kW) and torque at 420lb/ft (569Nm), but Singer says this is just the base tune, with more power available to suit the demands of each event.

A five-speed sequential gearbox was next, with Singer making this operable via a choice of traditional manual shifter or steering column-mounted paddle shifters.

To haul the ACS up, disc brakes with four-piston monobloc calipers were fitted all round, with a rally-style oversized handbrake lever added to the cabin.

Other additions to the ACS included a complete, FIA-specification rollcage, bespoke competition seats for driver and passenger that have been FIA-certified, a rehydration system for both occupants, race-spec GPS navigation, a long-range fuel tank and provision to take a pair of spare wheels.

Although the interior was entirely gutted to create the ACS, there are elements of Singer style to be found in what was fitted inside, including a carbon fibre dash, custom door cards and door handle pulls, custom rollcage padding and a large digital instrument display. The Alcantara-wrapped steering wheel is a Momo item with 12 o’clock marker and various in-car functions added. 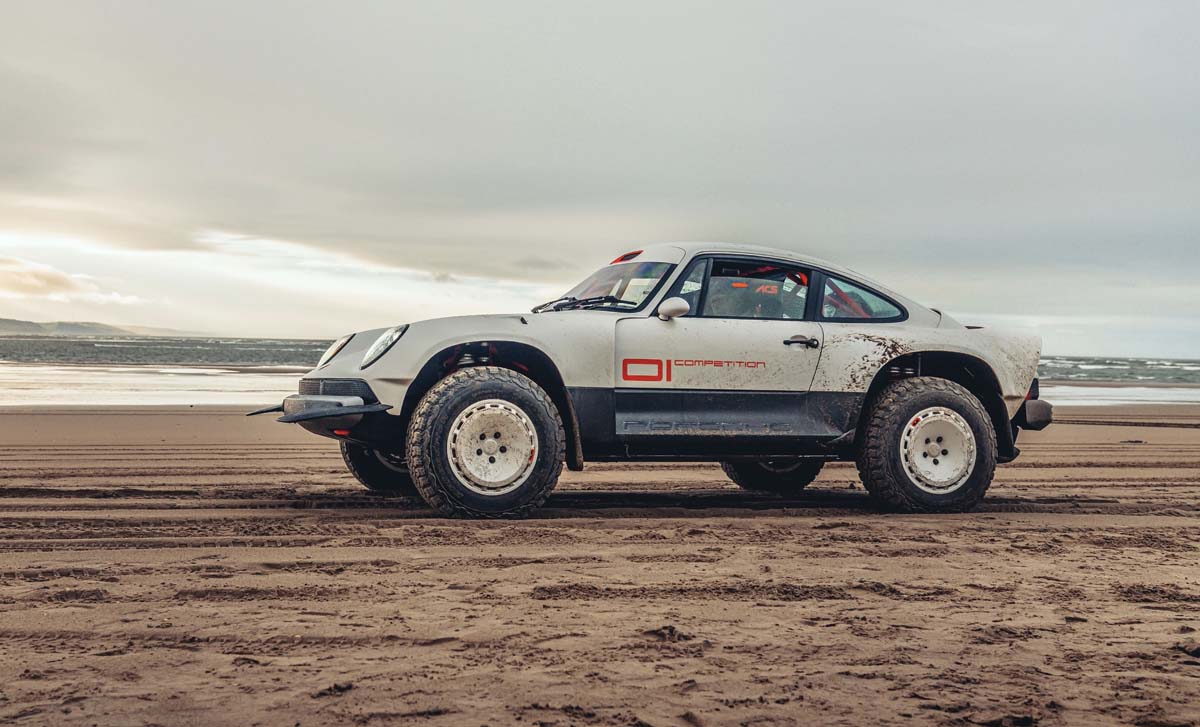 The owner who commissioned the ACS has agreed to make what was developed on his car available to other Singer customers to create similar machines. This doesn’t mean the ACS will be going into series production, though. Singer clarifies that each car will be approached as a bespoke restoration and personalised to the owner’s requirements.

“ACS advances Singer’s capabilities in forced-induction, all-wheel drive, off-road ability and dynamic response - all of which will support our ongoing mission,” Dickinson said. 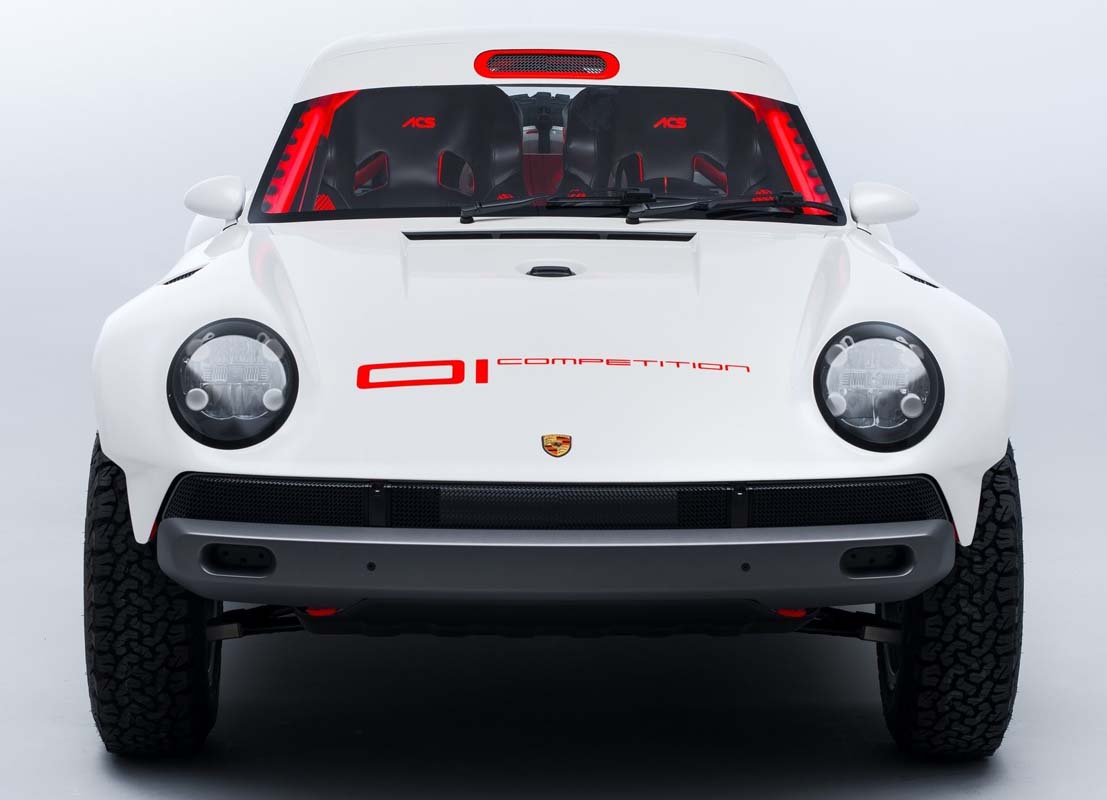 Future ACS vehicles will be produced at Tuthill’s facilities in the UK, with Tuthill also offering maintenance services and support packages for racing.

“I am delighted to have partnered with Rob and the team at Singer to bring this incredible machine to life and look forward to working with them in the future,” said Tuthill, who put the ACS to the test in some of the imagery shown here.

No word on what an ACS replica will cost, with Singer only saying that price will be dependent on the specification chosen by the owner. But, given that past Singer creations have cost in excess of $500,000, excluding the price of the donor 911, something in the high six-figure range wouldn’t be unusual.

“So much of what we’ve done for the last decade has been inspired by Porsche’s competition success and the All-terrain Competition Study provides us the opportunity to showcase that idea literally and vividly,” Dickinson added.

“We feel confident this machine can appeal to off-roading enthusiasm of all kinds, whether it be in the pursuit of professional competition at the highest level or adventure and exploration.

“This pursuit of focused competition studies is something you will see more of from us in the future.”