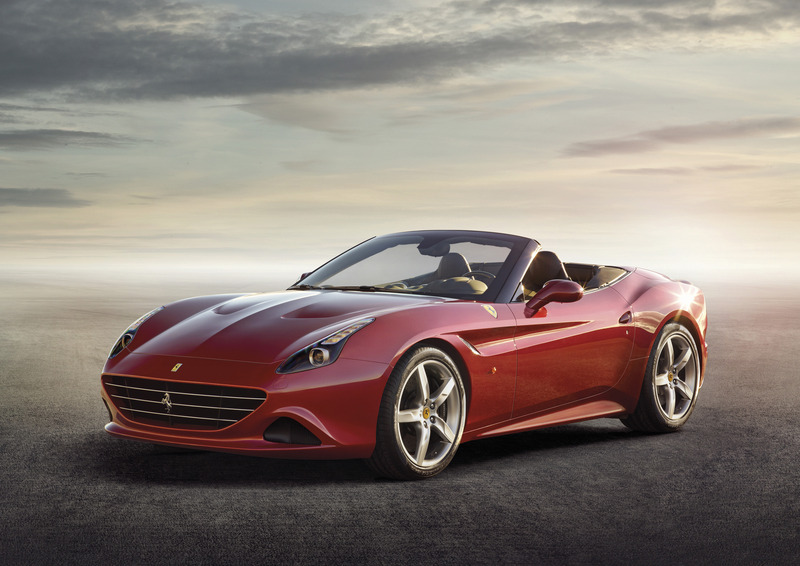 The California T's retractable hard top transforms it from a chic 2+2 coupé into a sleekly sophisticated spider in 14 seconds.

New Turbo Engine
The primary new feature on this California, and the reason for the 'T' suffix, is an entirely new turbocharged 3855cc 8-cylinder engine, which Ferrari says "delivers absolutely superb levels of performance, blistering pick-up and the most exhilarating soundtrack any turbo has ever yielded".

Ferrari claims virtually zero turbo lag from the new engine, and a torque curve that increases constantly across the rev range thanks to Variable Boost Management.

Compared to the outgoing model, the turbocharged California reduces fuel consumption by around 15 per cent* despite 70cv (51kW) more power and a 49 per cent increase in torque. Emissions are down to 250 g/km over the combined cycle which equates to a 20 per cent reduction in the CO2/cv ratio (0.44 g/cv) compared to the previous, normally-aspirated Ferrari California.

An intense Ferrari engine sound was achieved through design and special manufacturing techniques for components like the flat-plane crankshaft, the three-piece cast exhaust manifold and turbo housing. The engine note, which becomes more powerful during both the intake and exhaust phases, is claimed to be a first for a turbo engine.

Transmission
The California T's turbo engine delivers power through an F1-style 7-speed dual-clutch gearbox. Built by Getrag, the new transmission is described as being world class, and a significant improvement over the outgoing's California's gearbox.

Suspension and Brakes
The California T also features a new steering box and suspension set-up, with the latter consisting of new springs and latest-generation Magnaride dampers (which respond 50 per cent faster). Combined with body motion accelerometers, roll and pitch is reduced, resulting in more precise handling without sacrificing ride comfort. Ferrari's latest evolution of the F1-Trac traction control system has also been fitted to the California T, for maximum acceleration out of corners.

The CCM3 carbon-ceramic braking system (featuring new composite discs and pads) from Brembo is integrated with the ESP 8.0 premium which controls the high performance ABS for a 100 to 0 km/h braking distance of just 34 metres.

Exterior
While broadly faithful to the outgoing California design, the California T has been revised in all areas, carrying elements of the F12 Berlinetta and FF, but also dipping into the Prancing Horse's back catalogue for flanks that are said by the Ferrari Styling Centre to be inspired by the 250 Testa Rossa.

The front end features a new, narrower headlight design, along with an altered grille and bumper design, while the bonnet features two large reversed vents instead of the single air intake of the previous model.

The flanks feature revised front guard exhaust vents and reprofiled cutouts that extend deeper at the front, but taper earlier at the rear than the previous design. General profile is the same as the outgoing California.

The rear features vents that cut deeper into the rear guards, a new triple-fence diffuser and quad exhausts in a more conventional horizontal position, rather than the vertically-stacked units on the previous California.

Interior
Ferrari says the California T's cabin was designed to be as ergonomic as possible, with luxurious Frau semi-aniline leather trim throughout. Interior space options are increased, even with the top down, thanks to an opening between the luggage compartment and rear seats.

The steering wheel features paddle shifts for the 7-speed transmission, engine start/stop, and 'Manettino' switch that allows for on-the-go suspension and stability/traction control changes, while the dedicated Turbo Performance Engineer (TPE) gauge features between the two air vents in the centre of the dash. The TPE display's touch-sensitive surround allows users to scroll through screens with information on making the most of the new engine's performance.

A new infotainment system includes an extremely intuitive, high-resolution 6.5-inch screen featuring both touch-screen and conventional controls like those in the F12 Berlinetta.


The California T will be officially unveiled at the Geneva International Motor Show in March. 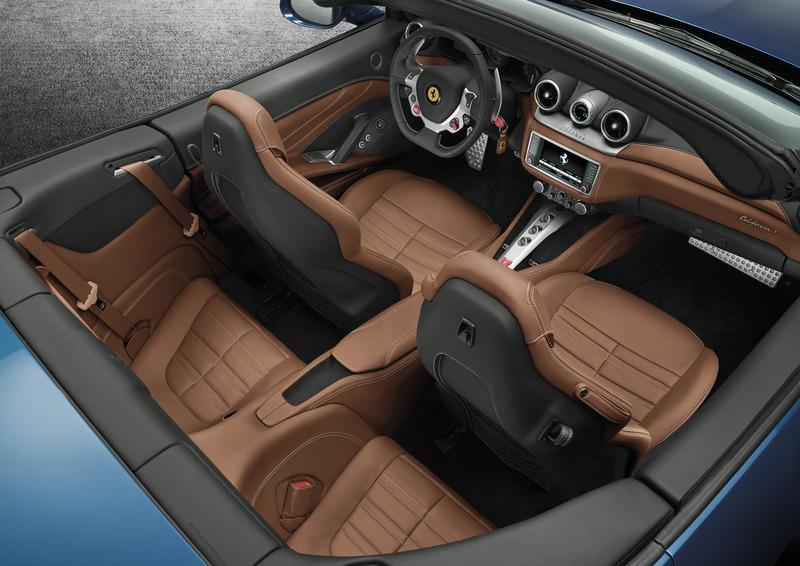 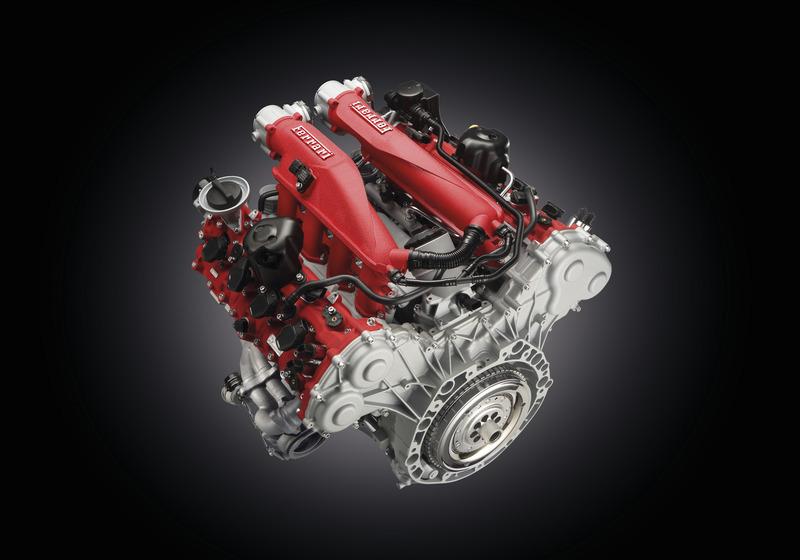 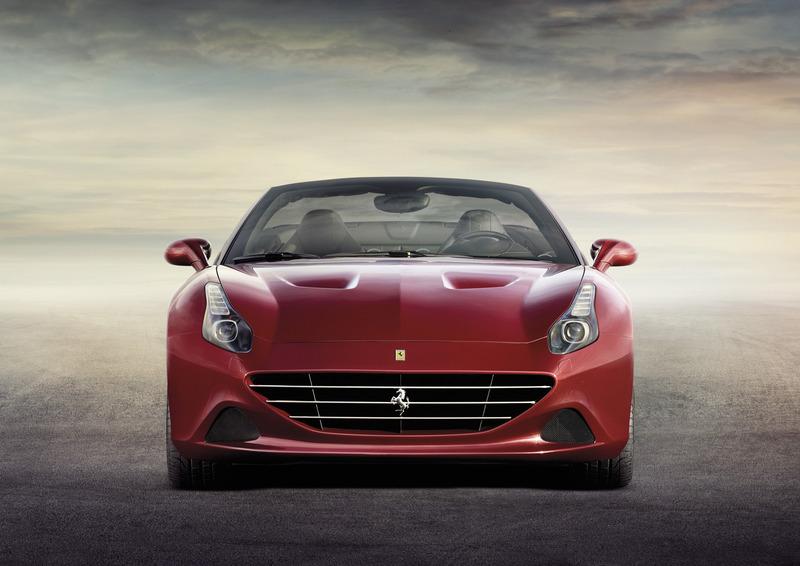 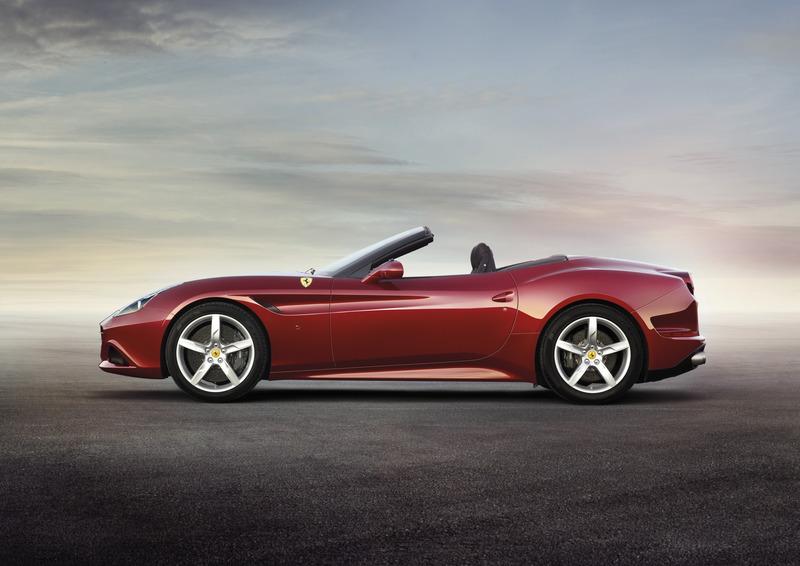 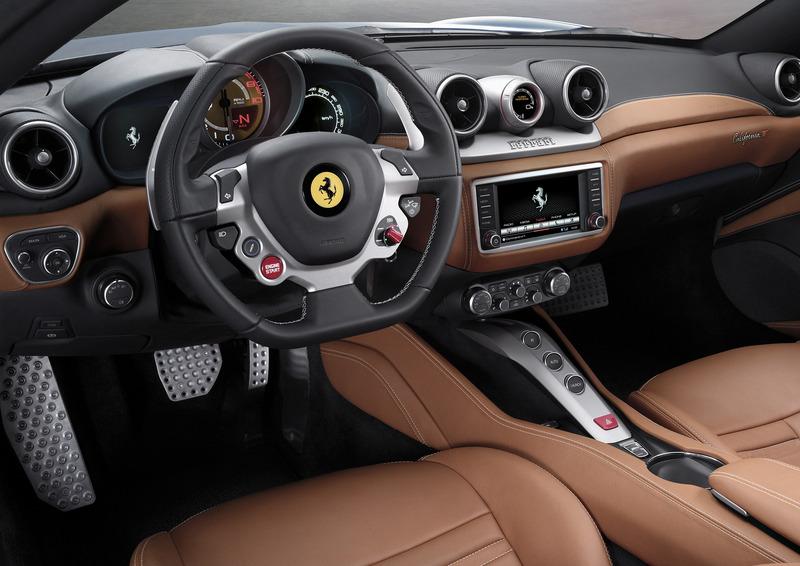 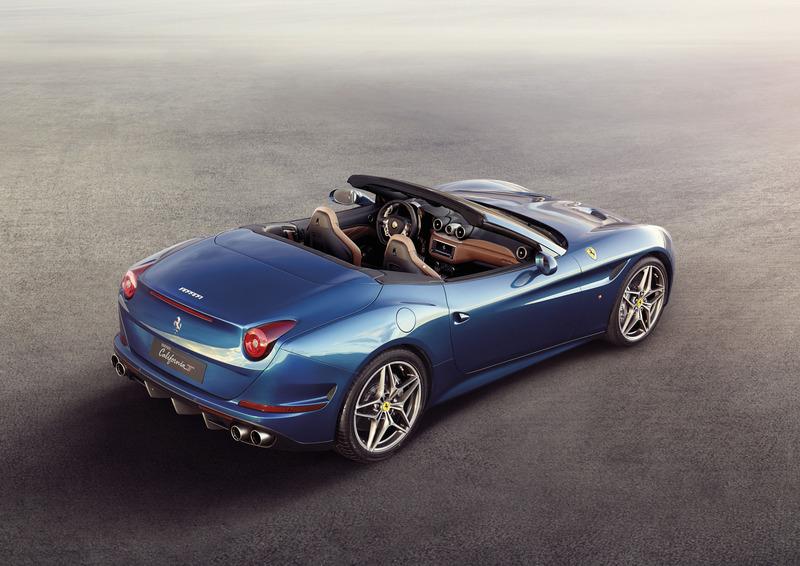 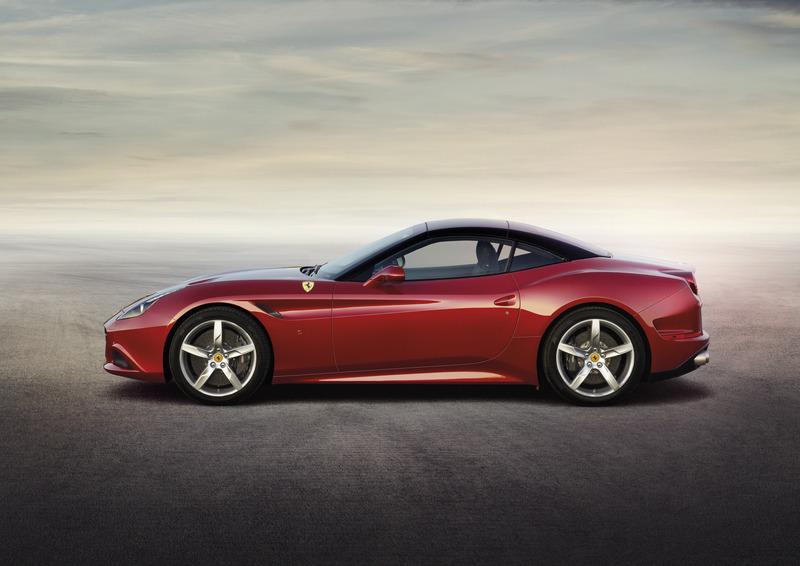 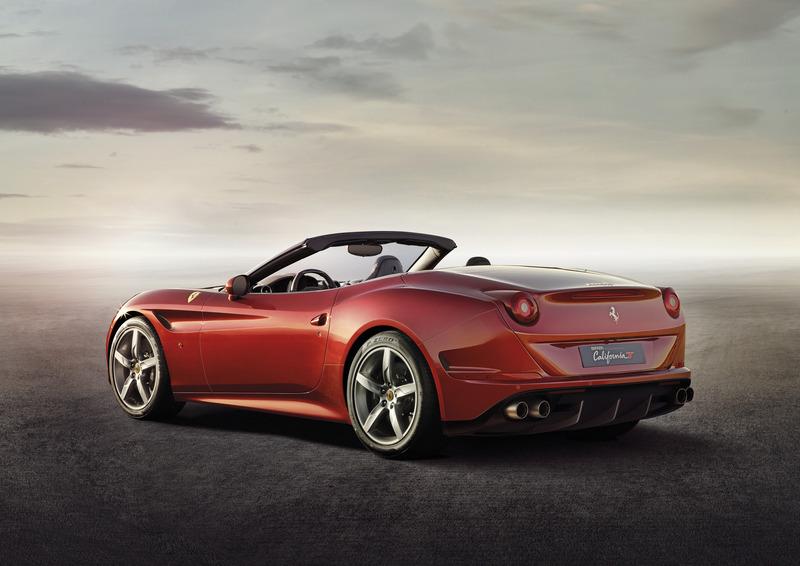