Fords up for grabs at Burns & Co. April auction

Fords up for grabs at Burns & Co. April auction

Burns & Co. Auctions’ upcoming Classic Car and Motorbike Auction on Sunday 10 April has plenty to tempt the Ford fan, with classic Aussie and American Fords, including full restos, unrestored survivors, customs and commercials, amongst the 86 consignments. 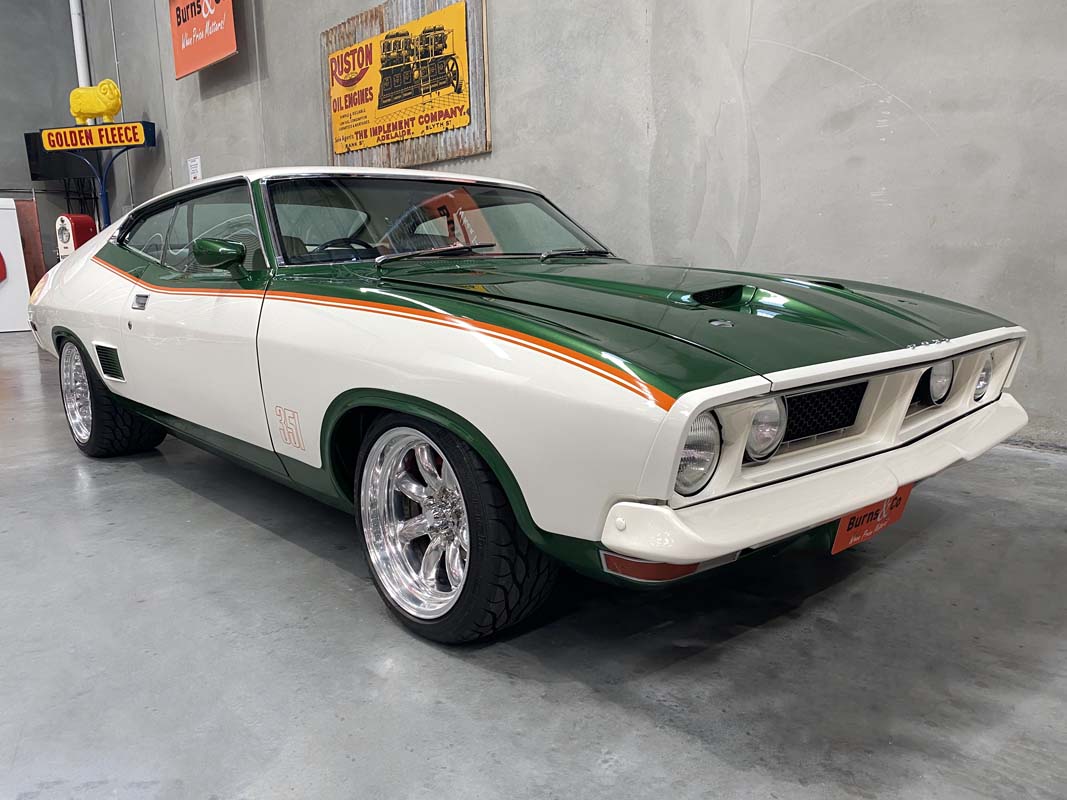 The Fords are part of a diverse list of new and old vehicles on offer, with motorcycles, automobilia and related collectables up for grabs, too. Pre-bidding for registered bidders is open now, with selling commencing from 12 Noon on Sunday, 10 April, at Burns & Co’s Melbourne auction rooms in Bayswater. 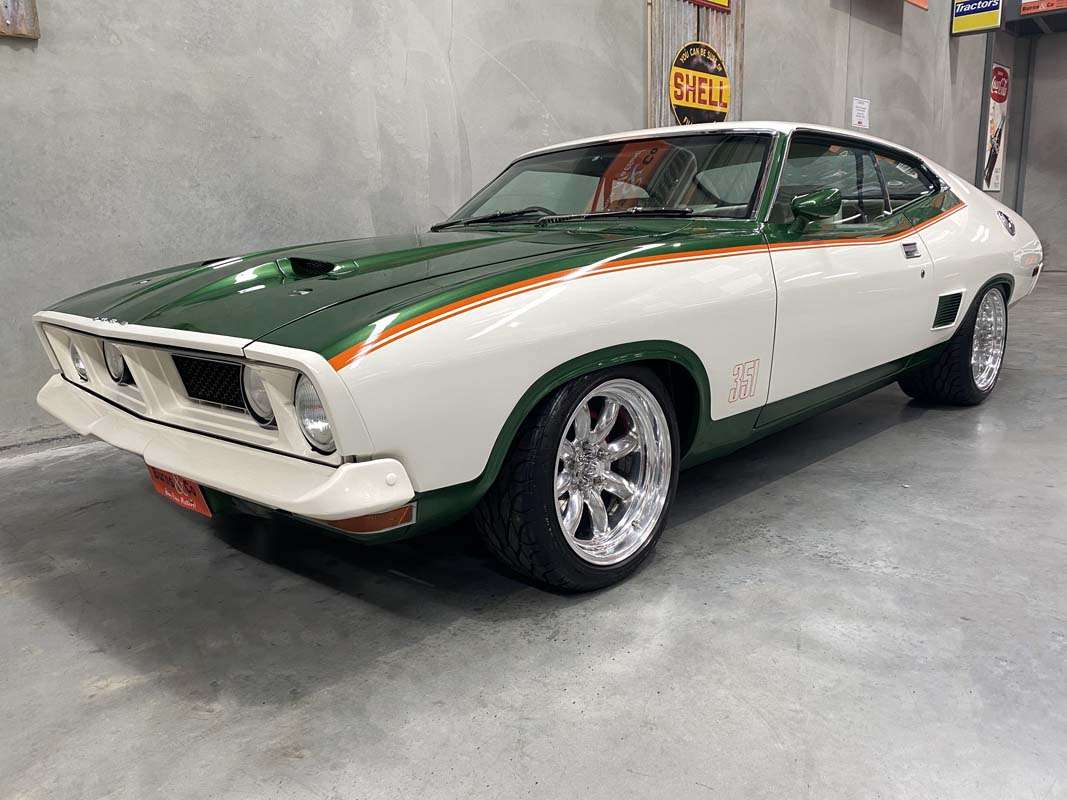 A John Goss Special unlike any other, this example was modified by the consignor to create the car he feels Ford should have offered back in the day as a tribute to the two-time Bathurst winner.

Over the course of a restoration that took 11 years, the factory 302 V8 was replaced with a warmed-up 351, with a new C4 auto transmission and 9-inch diff also fitted. 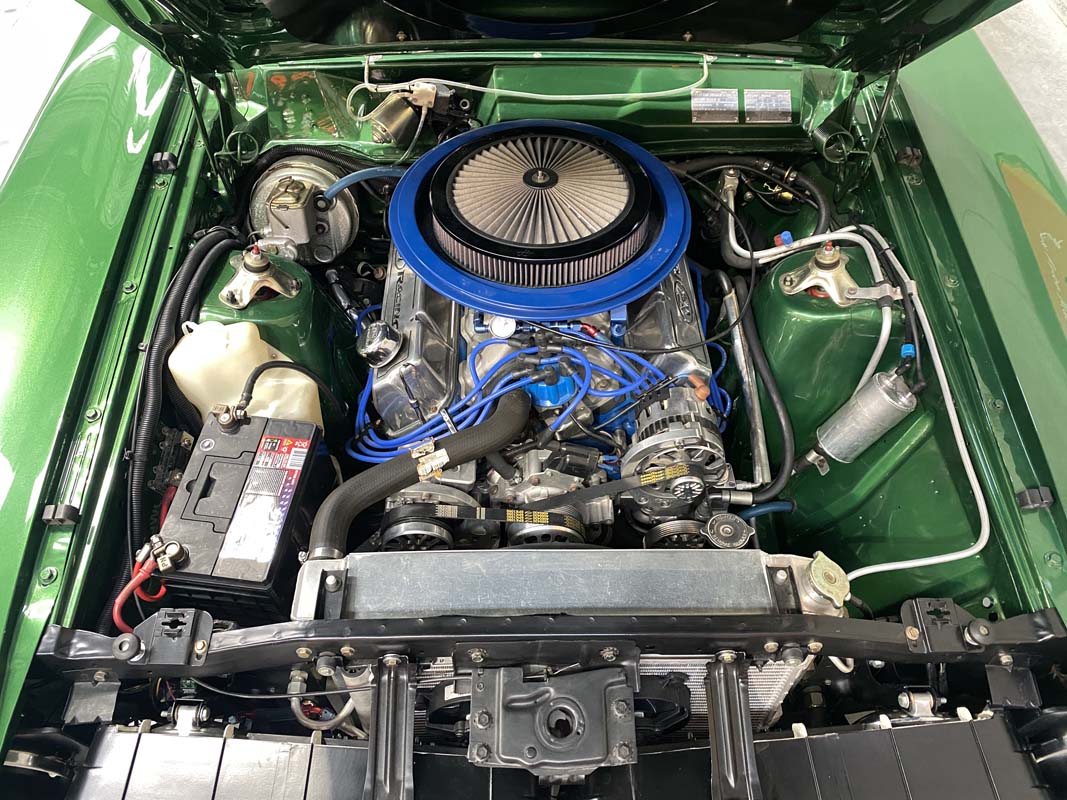 Bonnet scoops that were decorative on the factory-spec Goss were made functional on this version to feed air into the 351, which received upgraded internals, resulting in an estimated 460hp being sent to the rear wheels. That compares to around 240hp from the factory 302. 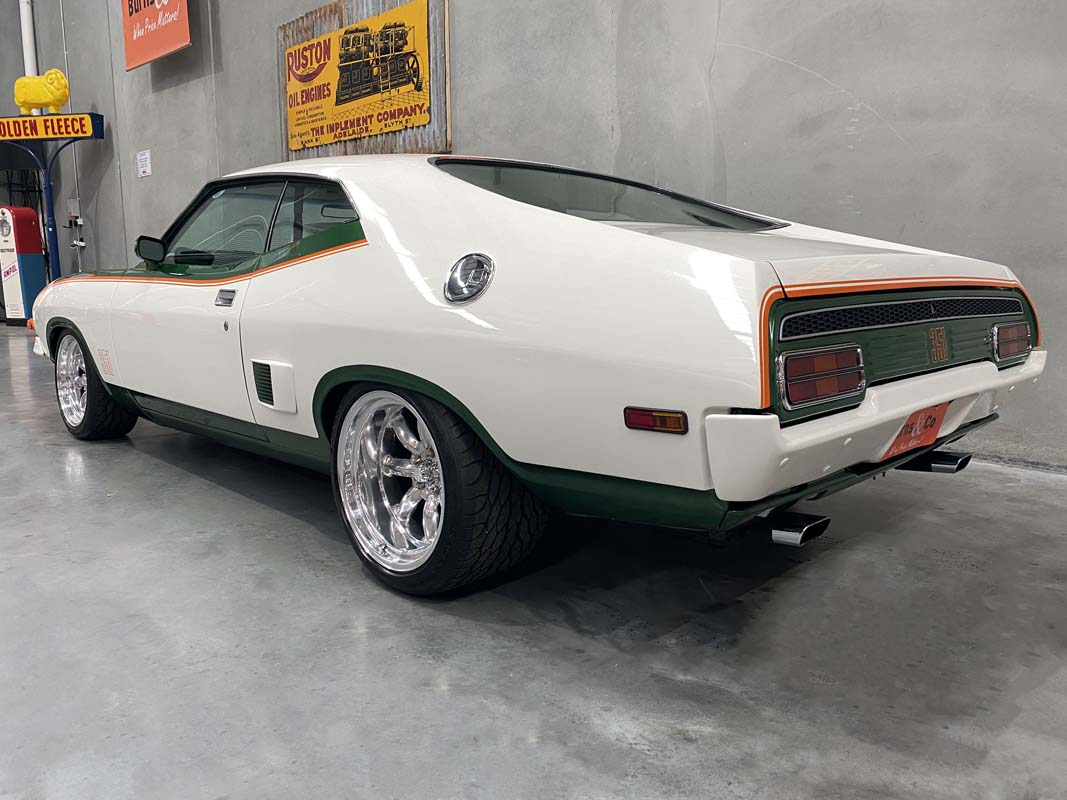 The custom-made two-piece wheels are 13 inches wide at the rear – the widest that could be fitted without tubbing the car – while the tyres came from a Lamborghini, apparently.

Those wheels obviously give this car a different look compared to a factory John Goss Special, with other differences including a Falcon GT grille and ‘351’ decals on the front guards and tail light panel. 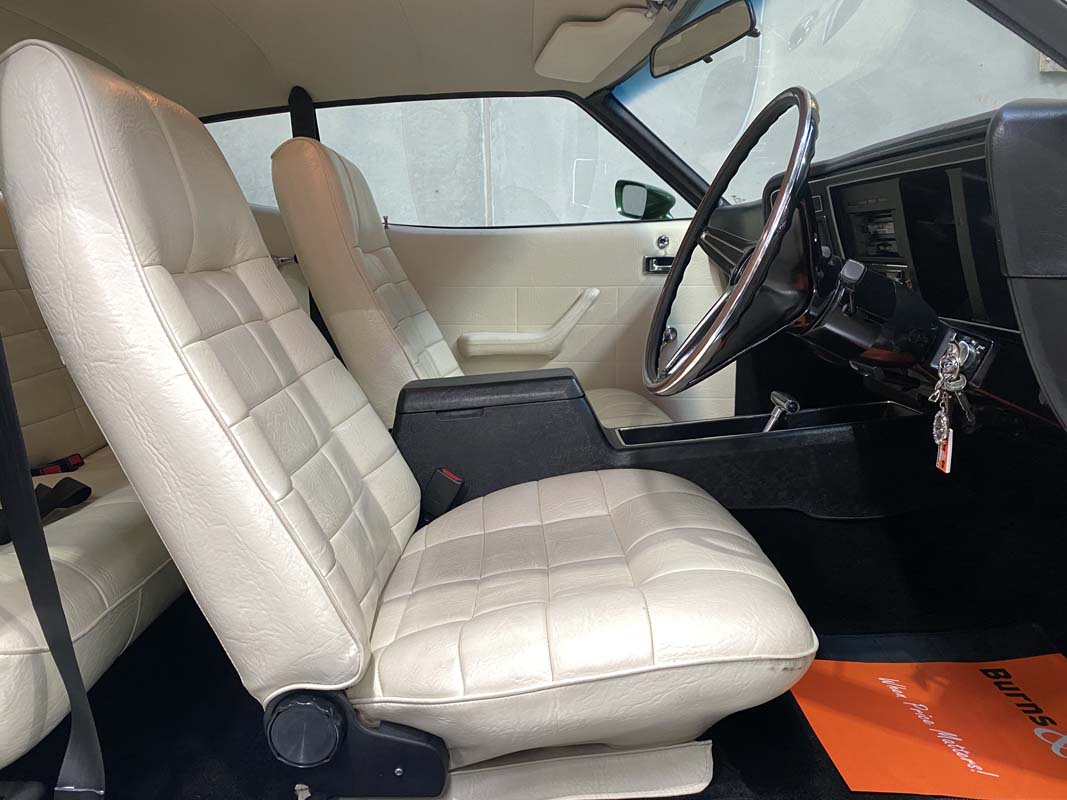 To make this car more of a mile-eating Grand Tourer, the consignor added extensive sound deadening during the rebuild, and while the interior looks stock with its white vinyl seats and black carpeting, it now features air conditioning, a modern stereo system and Bluetooth connectivity. Other changes include disc brakes all round and modified suspension. 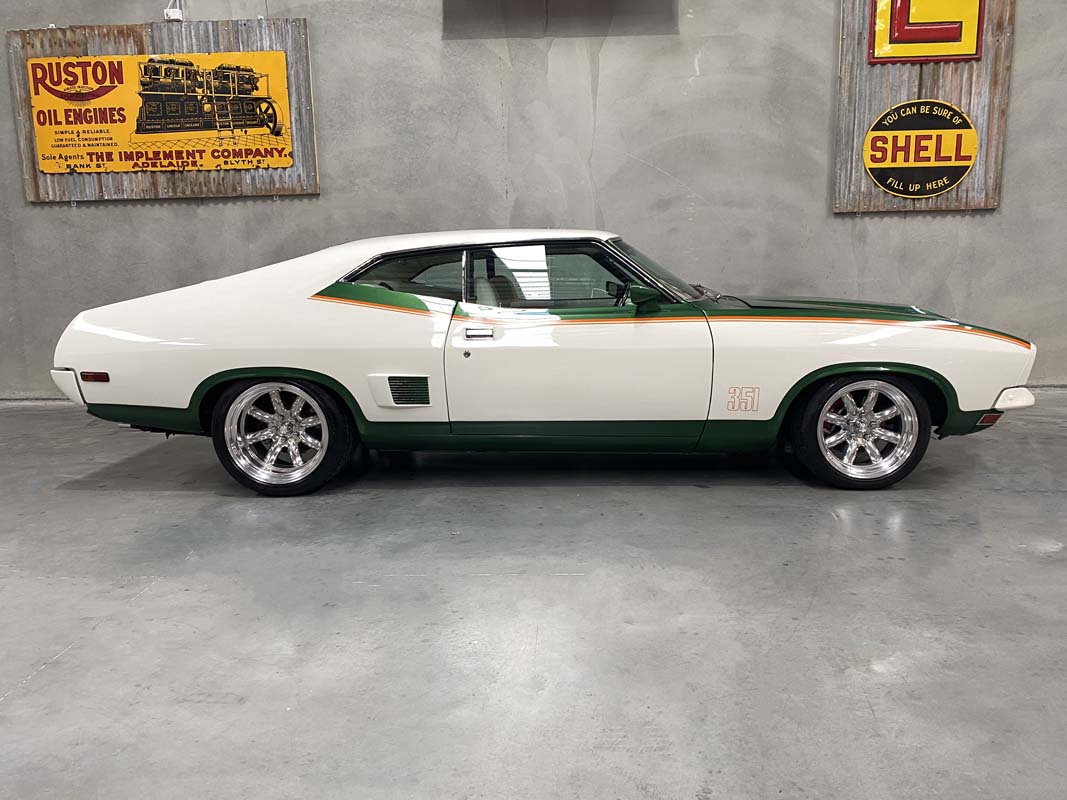 Driven sparingly since the restoration was recently completed, this upgraded John Goss Special comes to auction with just 71km on the odometer and is being described as one of the best examples of this collectable classic Ford you’re likely to see.

Bidding on this car was already up to $110,000 at time of writing. For more details, click HERE 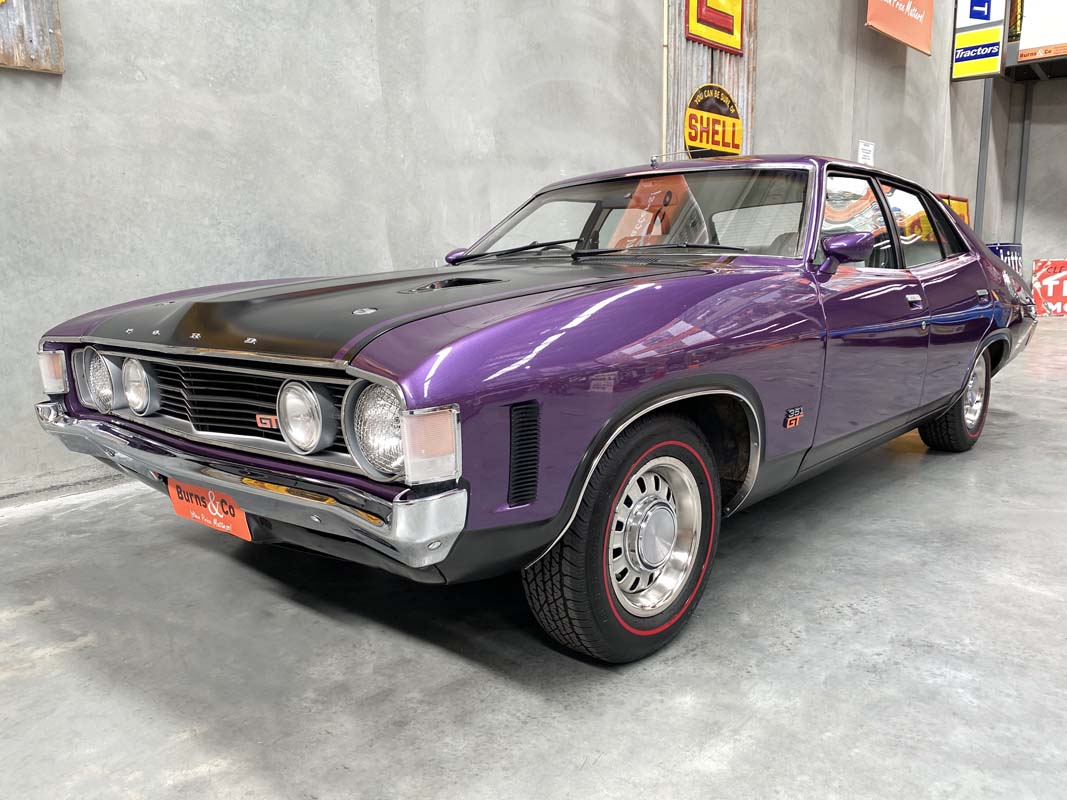 1972 Ford XA Falcon GT sedan
Originally sold by the renowned McLeod Ford of Rockdale, NSW, this genuine XA Falcon GT sedan escaped the ‘Horn Car’ treatment applied to many GTs and other Falcons to pass through that dealership and presents today as it would have appeared when new in 1972. 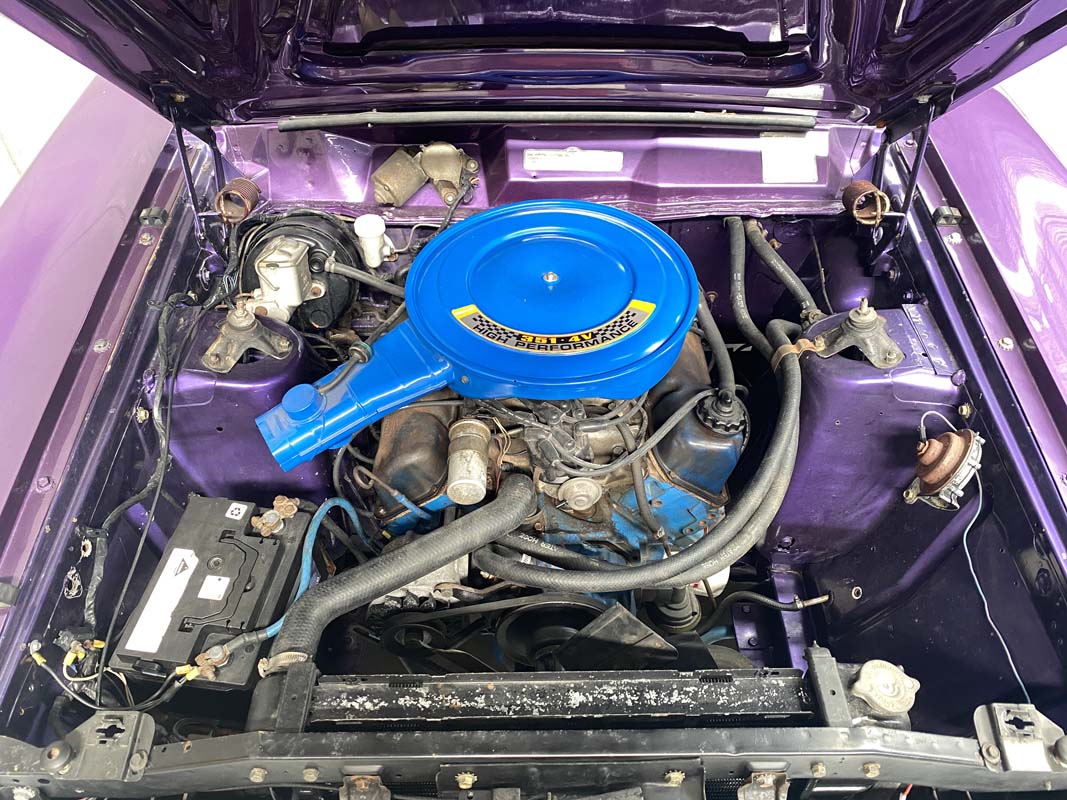 The standard GT 351 V8 is matched to a floor shift 4-speed manual transmission, and while it’s unknown if either are the originals, the consignor is supplying a spare 351 block with the sale.

It’s possible the exterior was resprayed in the past, but under the bonnet, the engine bay appears original, as does most of the interior.  There’s a ‘GT HO’ badge on the centre console, though, adding to the mystery of this car’s provenance. 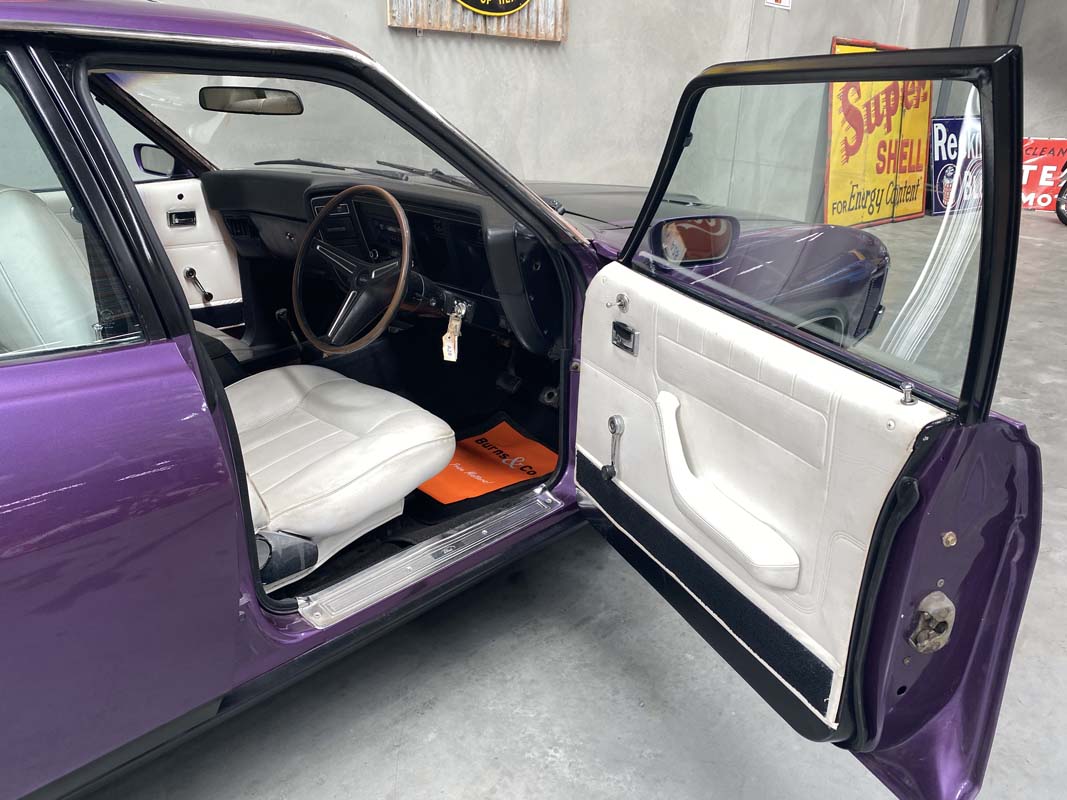 The VIN tag and ACCHS report supplied with this car confirm it’s a genuine GT that was finished in the same Wild Violet with a white vinyl interior as presented here. The factory-fitted options were limited to a Superfringe Deluxe radio, tinted windscreen and the mandatory seat belts. That makes it one of 26 XA Falcon GTs in this specification. 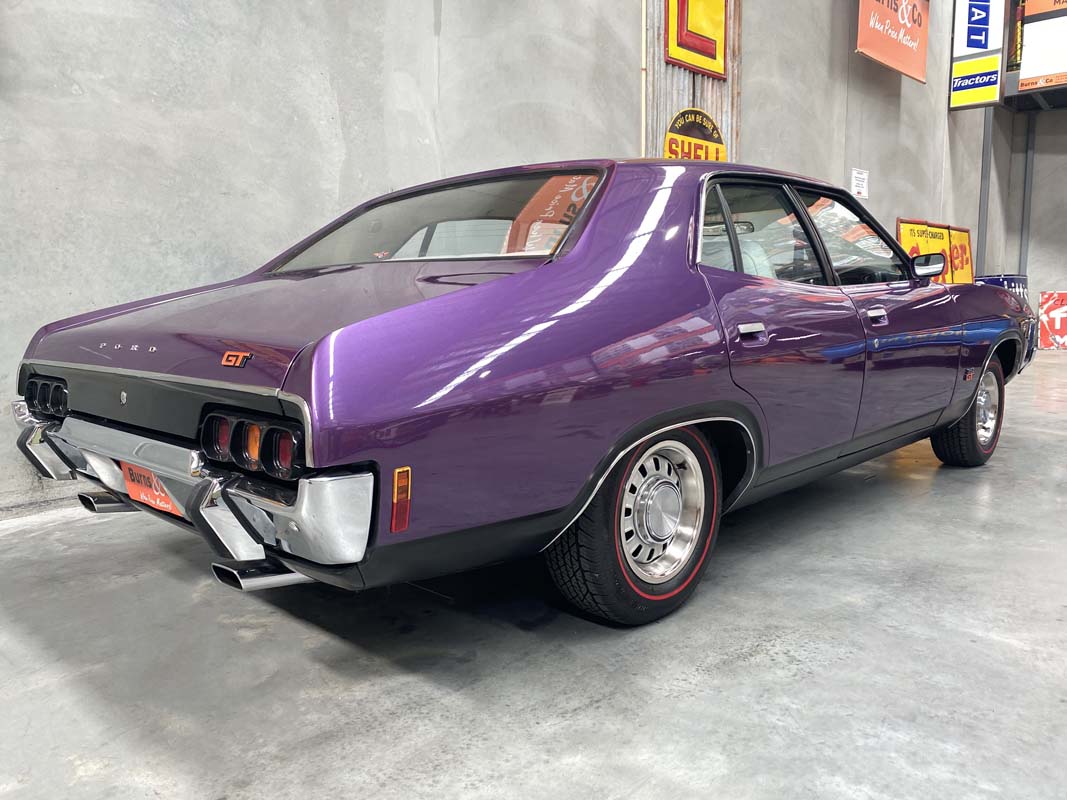 Described as running and driving well, this genuine, desirable piece of classic Aussie muscle should be one of the better sellers at the Burns & Co auction. For more details on this car, click HERE. 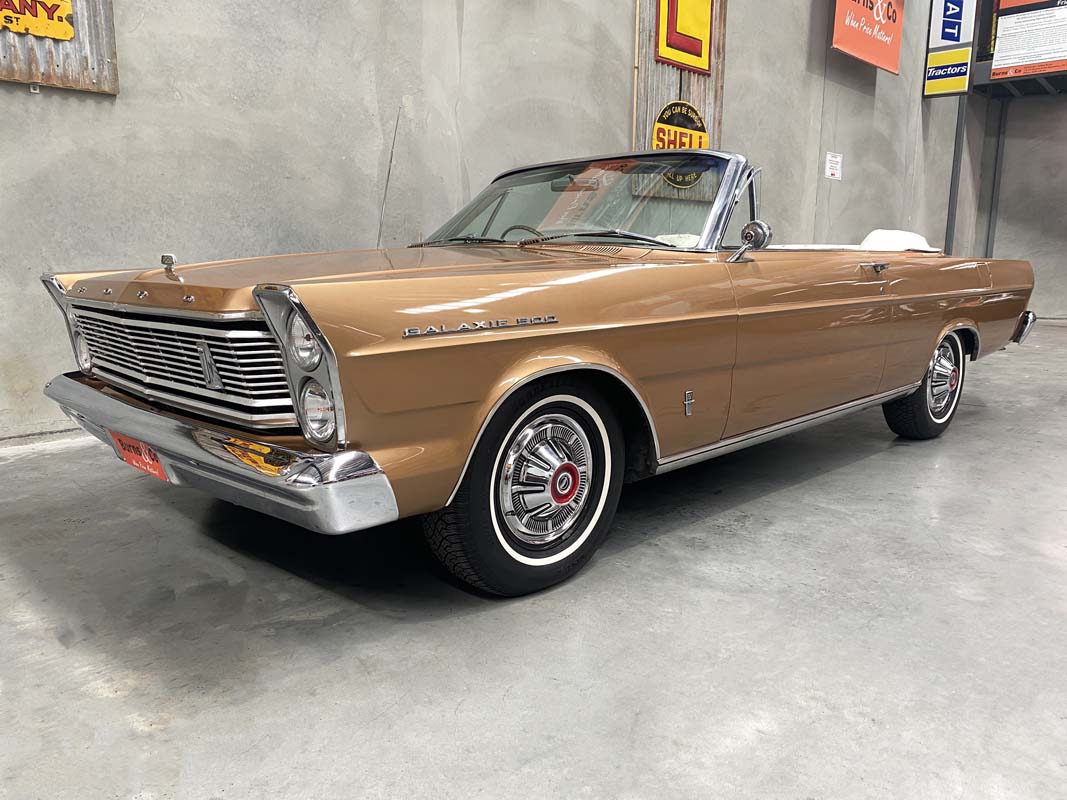 An outstanding piece of mid-60s Americana, this Galaxie 500 convertible has been made safer and more practical for Aussie roads with a right-hand drive conversion. Aside from that, the car presents as original in most other respects. 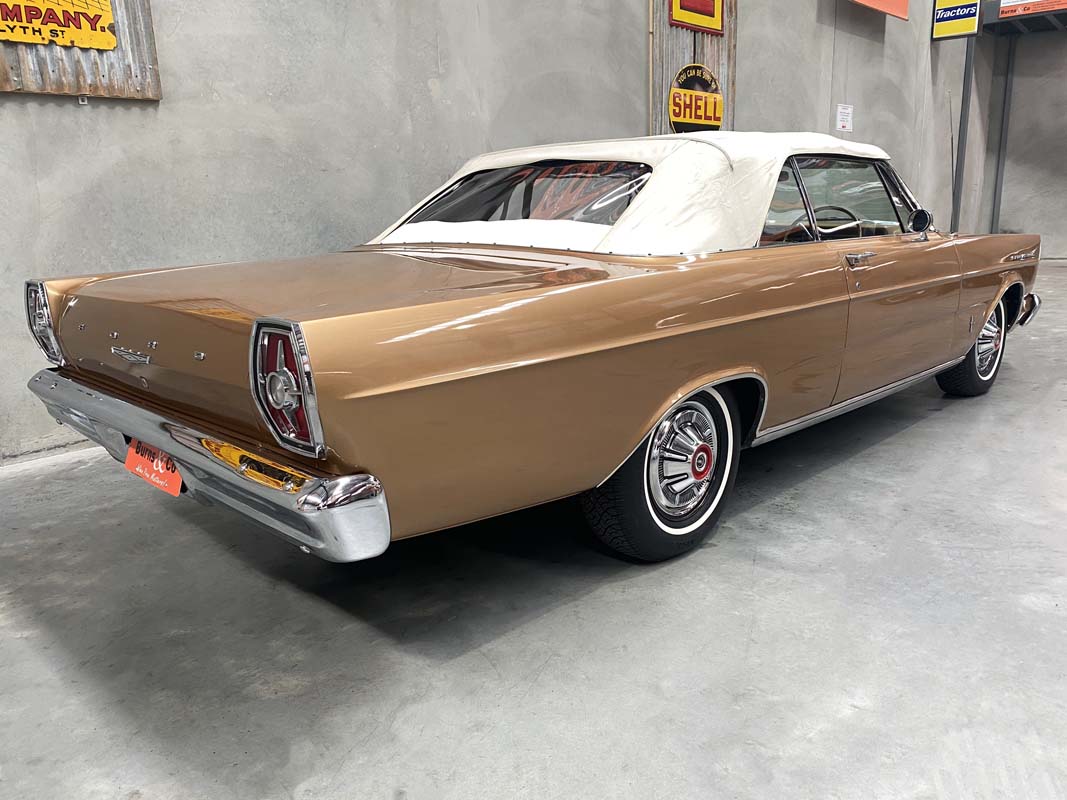 From 1962, the Galaxie 500 became a separate model from the Galaxie and was offered in a wider range of body styles and trim levels, including the Victoria hardtop and Sunliner convertible, as well as ‘XL’ versions of both.

By 1965, an LTD hardtop sedan and hardtop coupe had been introduced, and while more than 181,000 Galaxie 500 four-door sedans were built for ’65, production of the standard convertible like this one was just over 31,000. 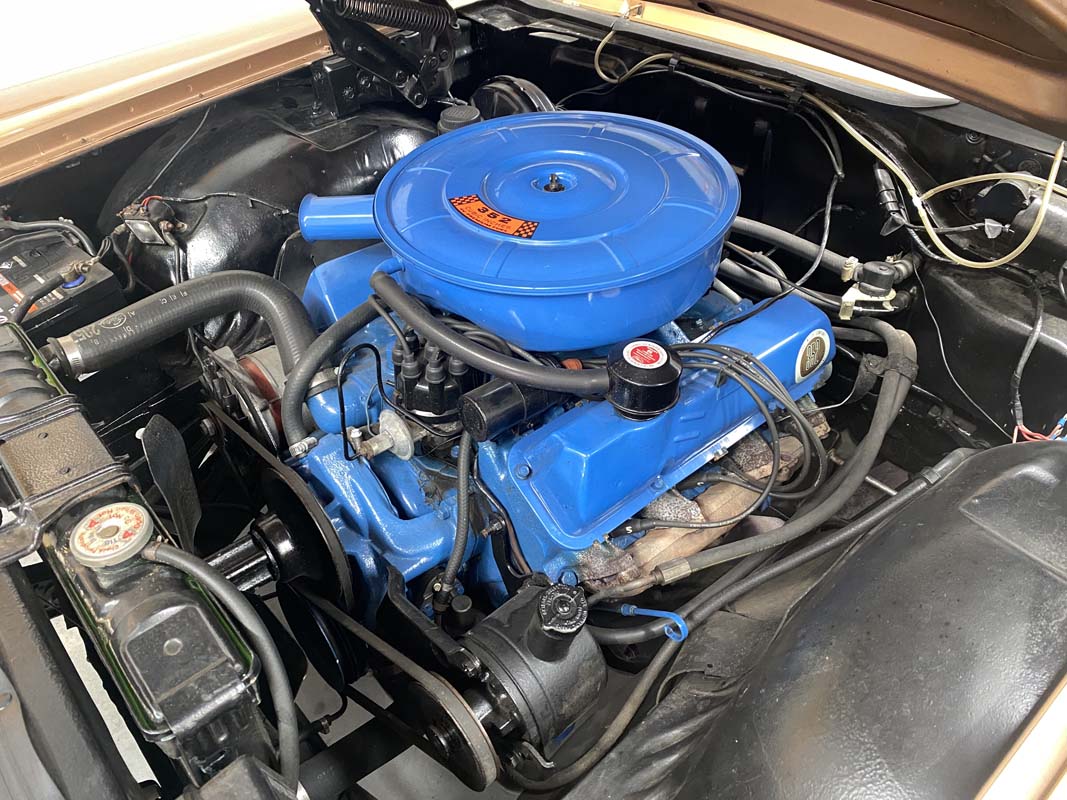 This example is fitted with the FE 352 V8 and Cruise-O-Matic three-speed auto, both of which are likely to have been factory fitted. Finished in gold with a white convertible top and tan cloth interior, the top and trim are probably the factory original finishes, too.

The RHD conversion looks to be well executed, with a vinyl dash top hiding the switch, while speakers for an aftermarket sound system appear to be the only modern upgrade. 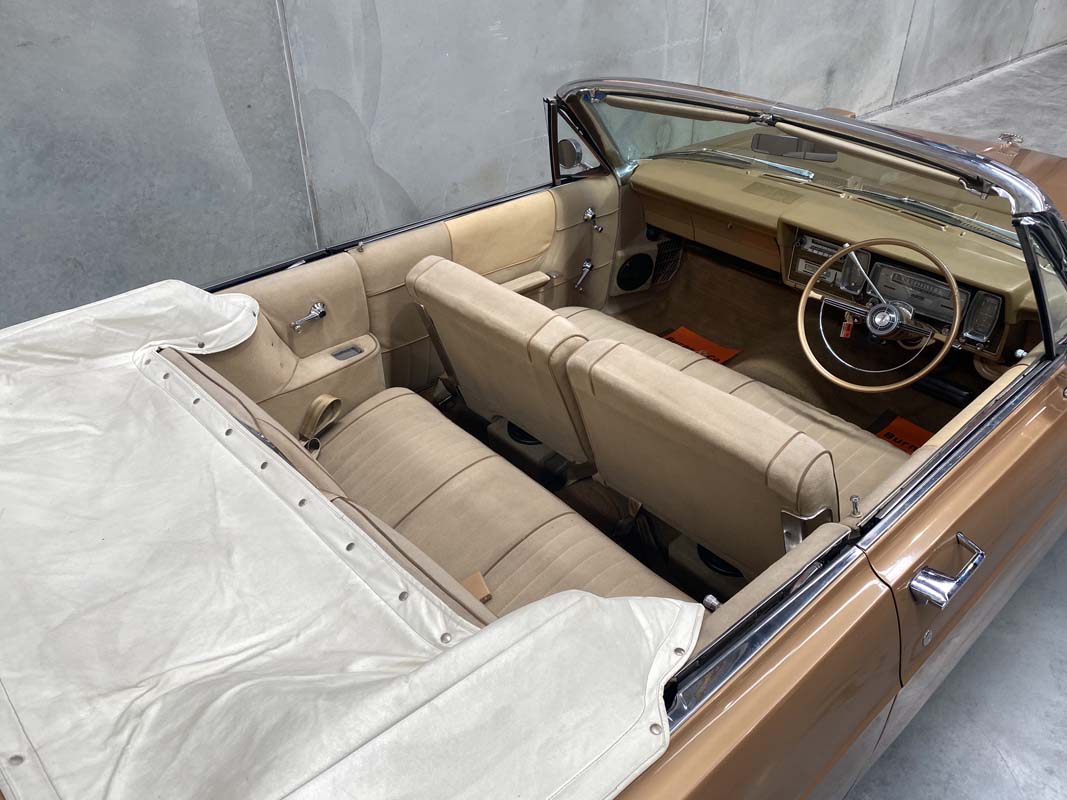 Previously on full Victorian registration, this Galaxie 500 shows just 27,959 miles on the odometer and really has to be seen to be appreciated, according to Burns & Co. 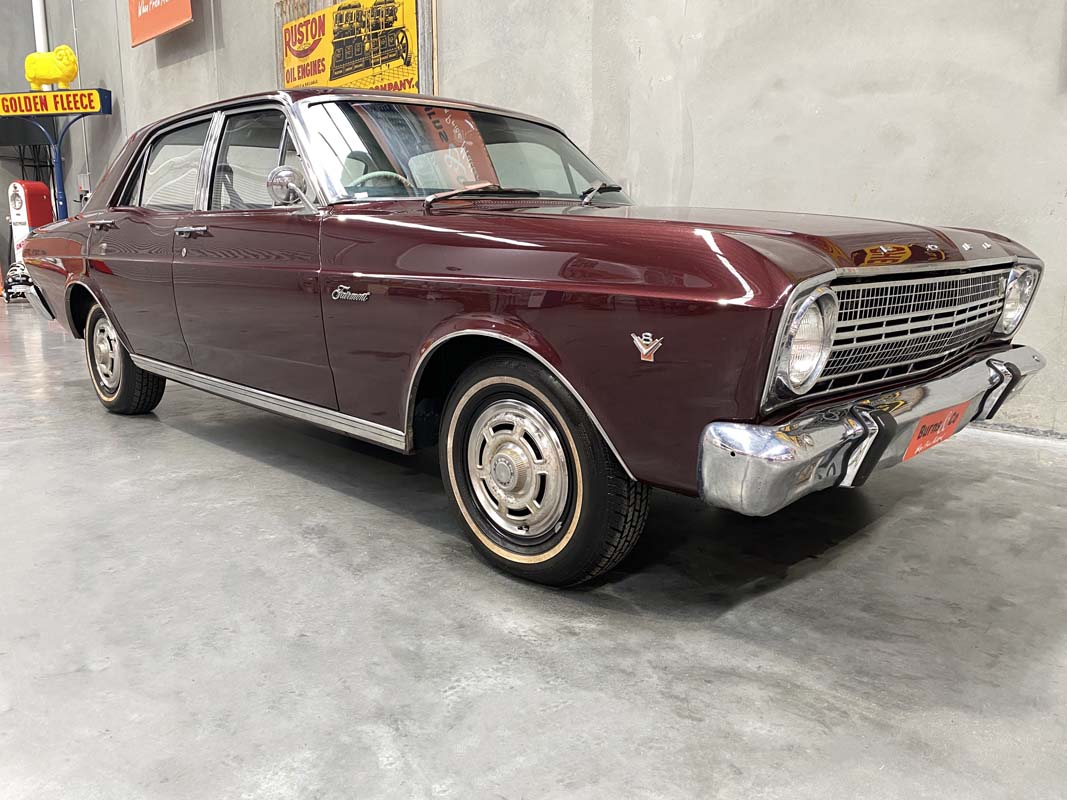 1967 Ford XR Fairmont sedan
A rarity on the auction block, or indeed any selling forum in this day and age, the XR Fairmont shown here is a genuine one-owner car. Sold new by Melford Motors in Melbourne, it has been with its first owner in country Victoria for 55 years. 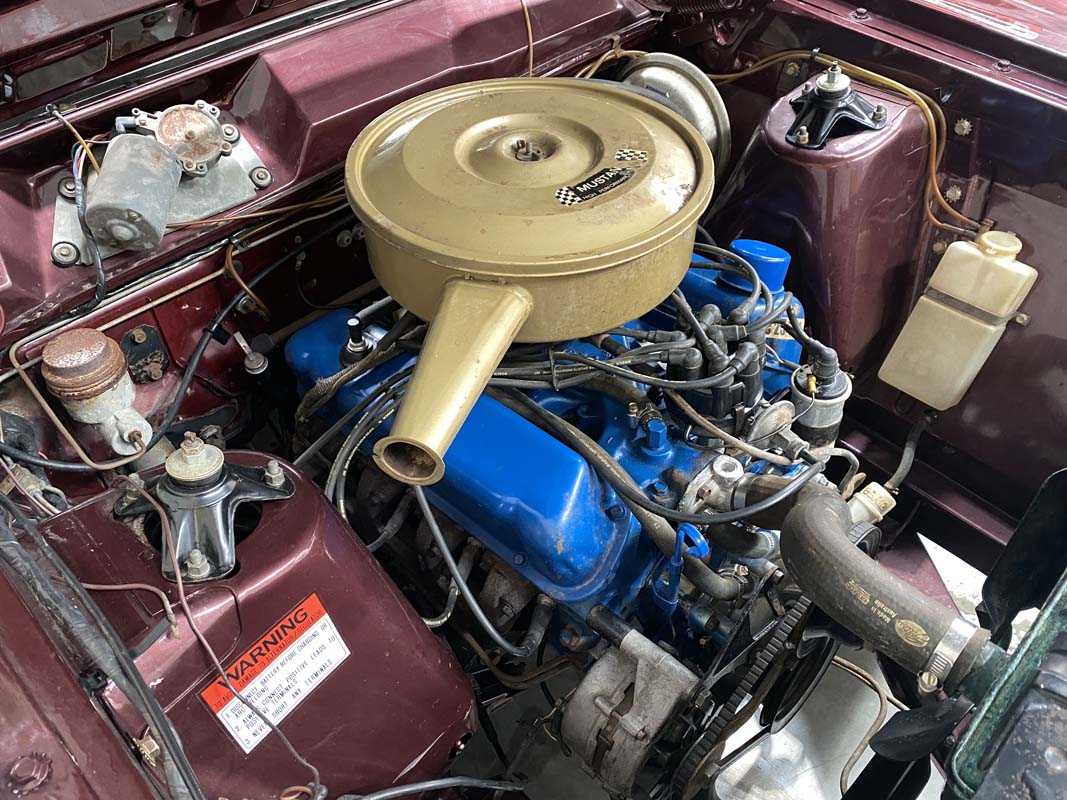 Finished in Sultan Maroon with a black vinyl interior, this Fairmont was factory-fitted with the same 289 V8 that was standard on the original XR Falcon GT and optional on a Fairmont and Falcon at the time. In this instance, the 289 has been matched to a three-speed column-shift automatic.

While the factory options selected by this car’s first and only owner are unknown, the bumper overriders, full-width hubcaps and white-stripe tyres are typical for the period. 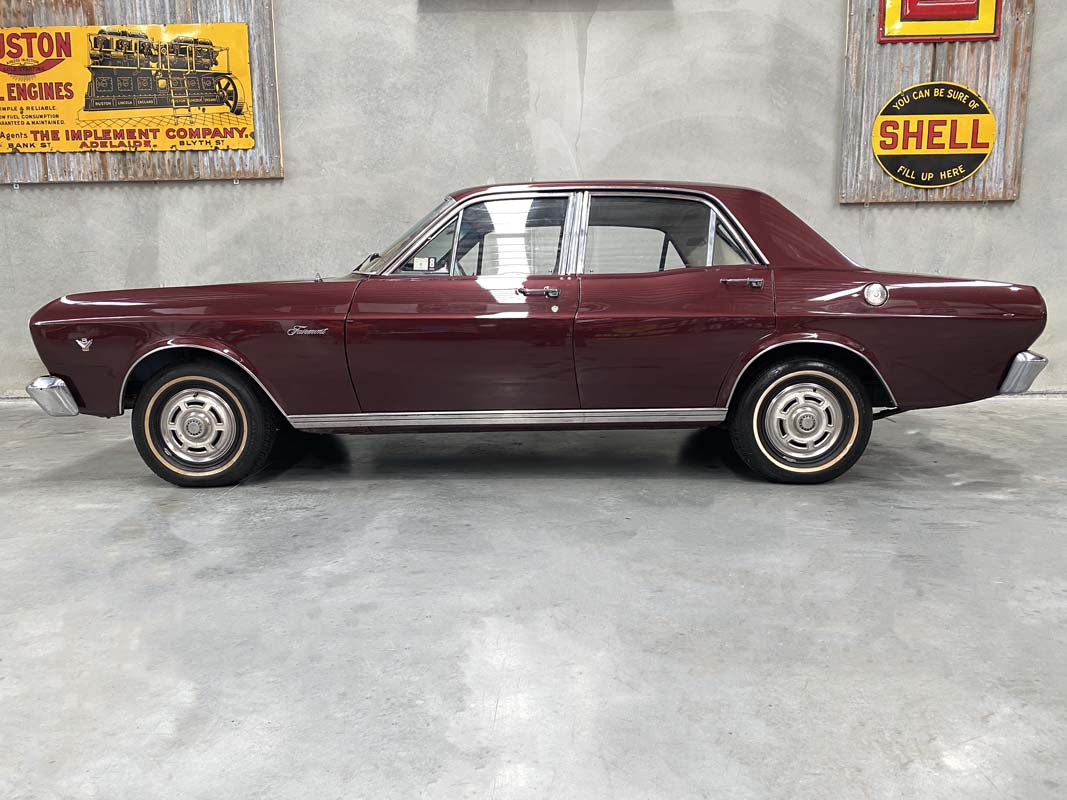 The paint, chrome and other external brightwork is in remarkably good condition for a car of this age. Same goes for the interior, including the seat upholstery and dash.

This car did receive a closed-door respray approximately seven years ago, while the engine has had new bearings and piston rings fitted.

Inside, the door and window rubbers have been replaced, as have the carpets, but the rest of the interior is original. A period aftermarket radio appears to be the only deviation from stock. 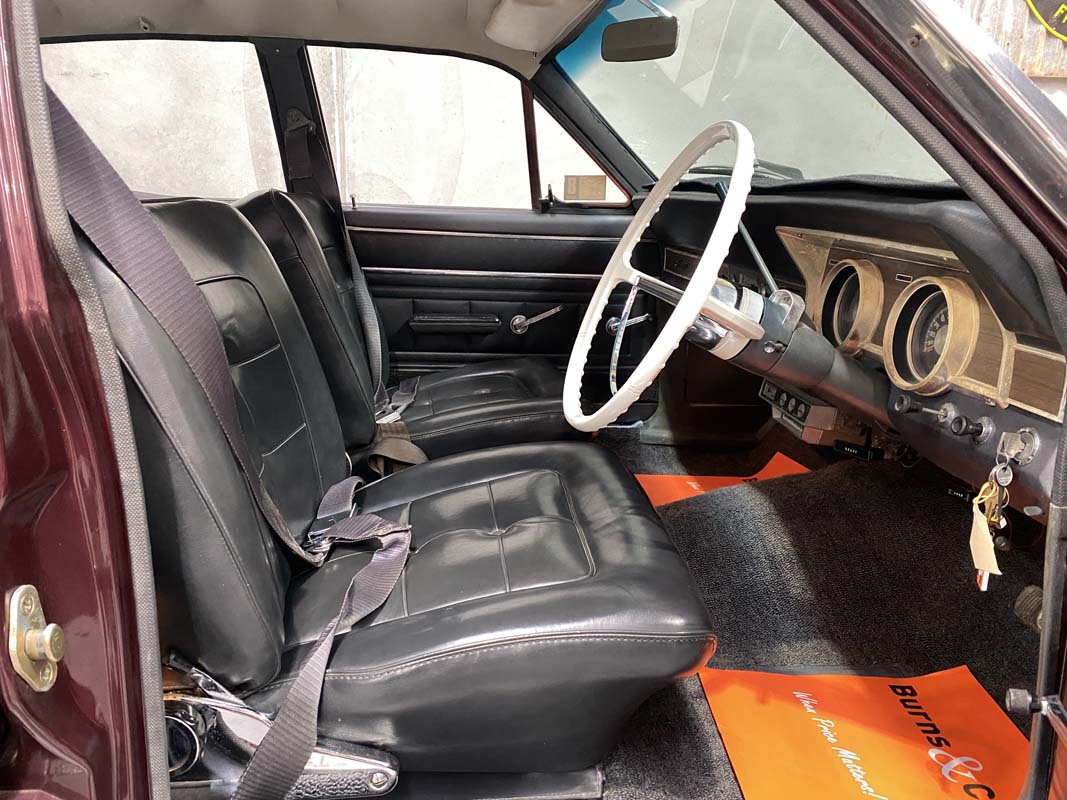 Still on full Victorian registration before it was consigned (but to be sold unregistered), this Fairmont is said to run and drive well, with 22,649 miles on the odometer. Burns & Co. say you won’t find another example like this. 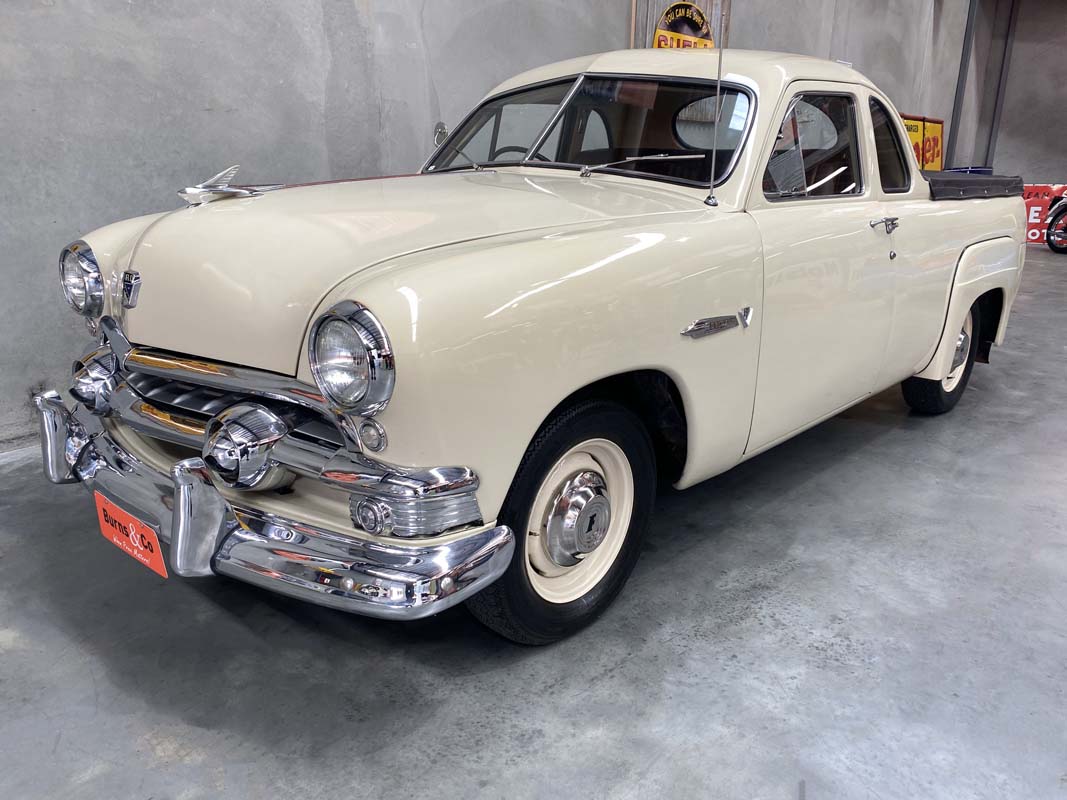 From a period before the Falcon, when Ford Australia’s best sellers were the Prefect, Anglia and Zephyr, this 1951 coupe utility is also unusual in that it was one of only two Ford models available at the time with a V8 engine. The British-built Pilot had been discontinued in 1951, leaving the US-style four-door sedan and all-Australian coupe utility as the only Ford passenger vehicles available with the flathead eight. 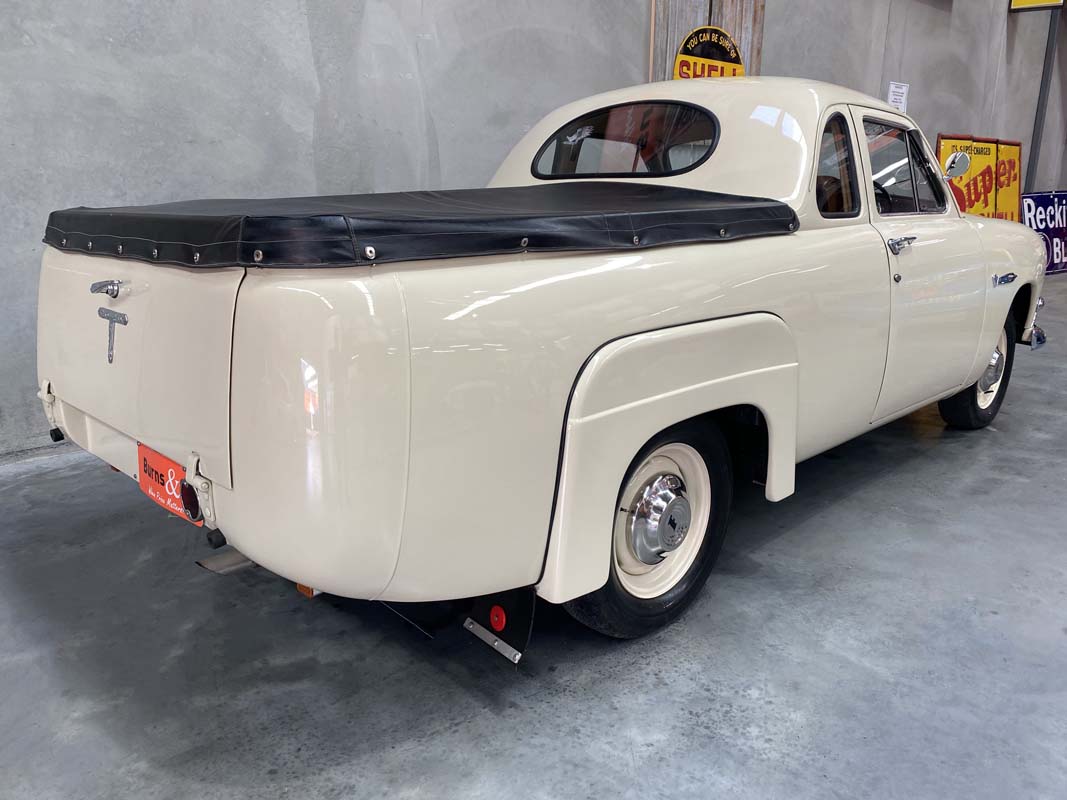 In terms of styling, the ’51 coupe utility was the same as Ford’s American offerings for 1951 from the doors forward, including the grille with dual projections that led to the ‘Twin Spinner’ nickname.

The ute body is unique to Australia and adds side windows and an oval rear window, while the inclusion of the wider Mercury rear axle necessitated the addition of wheelarch flares. 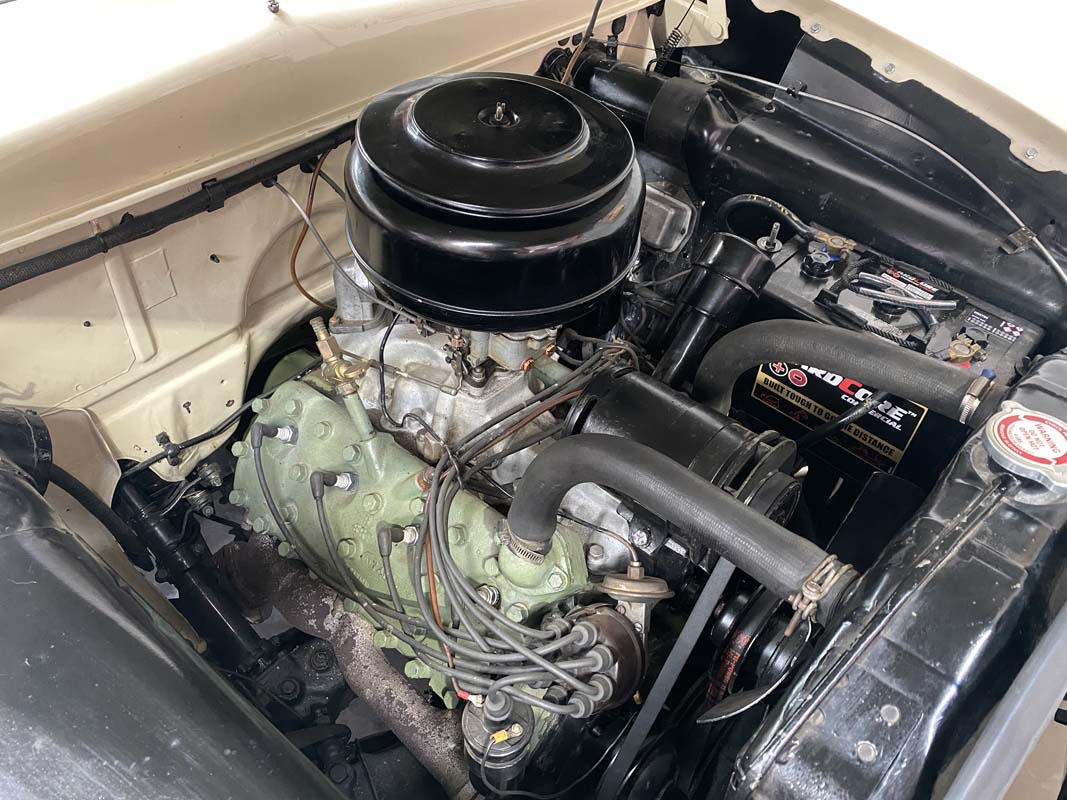 Assembled in Ford’s Geelong plant, this ute spent its most recent years in Tasmania, where it was subjected to a full, factory-authentic restoration.

The all-stock appearance includes the 239ci flathead V8, three-speed manual transmission and even the 6-volt electrics. 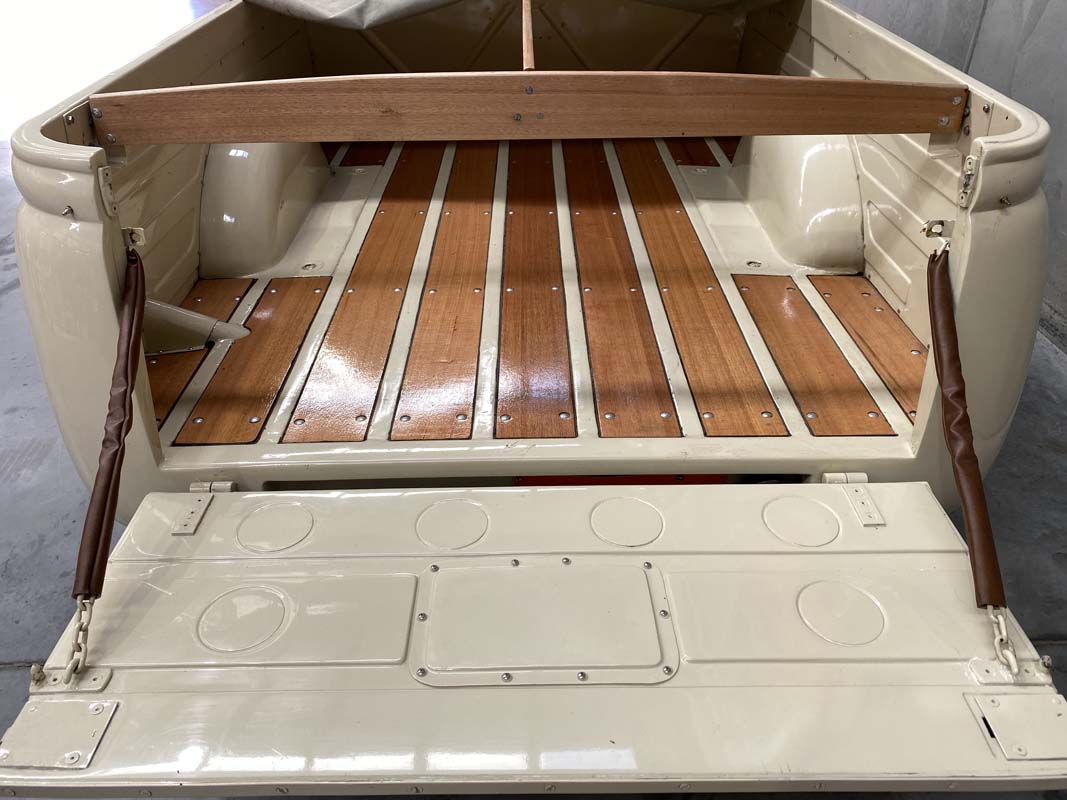 As well as a new timber-floor in the tub, there’s a timber brace for the fabric tonneau instead of the usual steel bar. Inside, the restored full-width bench seat, steering wheel, column shifter, gauges and rubber floor coverings are all factory authentic, too.

The dash configuration was unique to the 1951 models, but had the same painted wood finish on the metal dash top as all such American-based Fords offered here from 1949 to 1954. 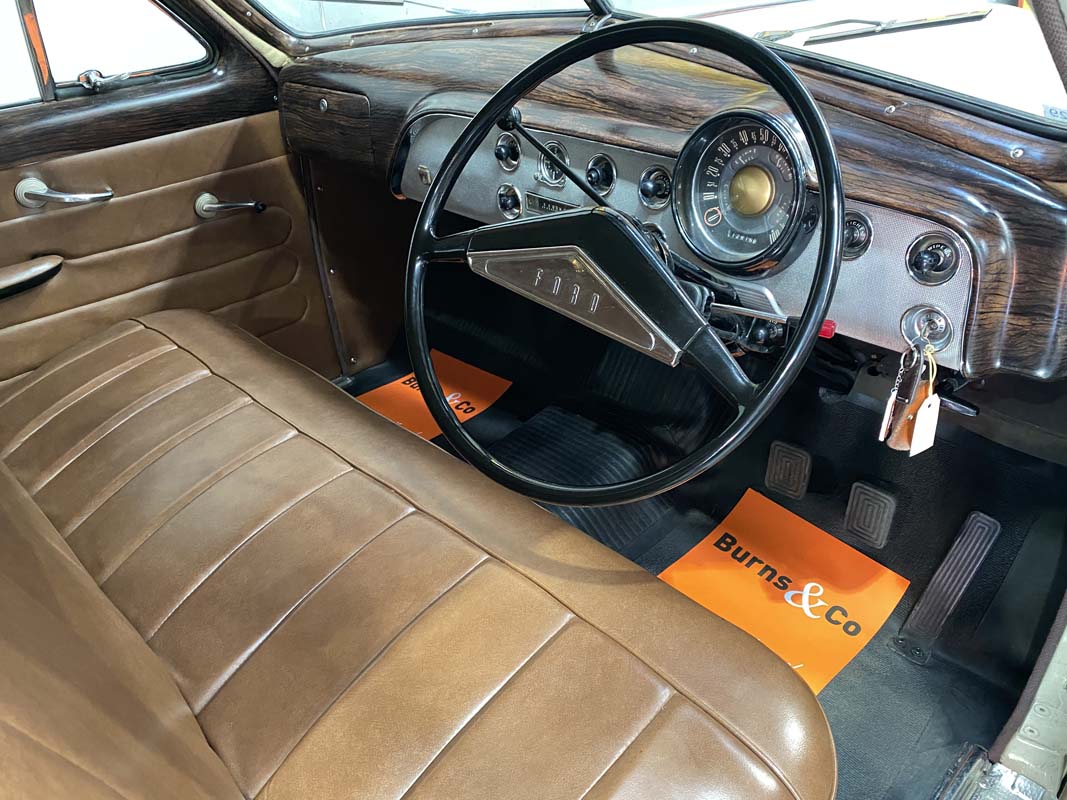 As the restoration is only a few years old, this ute still presents exceptionally well and needs nothing spent on it. According to Burns & Co., it would make a great club car.

Burns & Co’s April Classic Car and Motorbike Auction will be held on Sunday, 10 April, with selling commencing at 12 Noon.

For more details, pre-auction inspection times, how to register for bidding and the full catalogue, click HERE.