Unlike June's Goodwood Festival of Speed, September's Revival is a 'retro' themed event, with cars almost wholly predating 1966, reflecting the Goodwood circuit's 1948-1965 heyday.
The annual Goodwood Revival is always a pretty wild event, but the 2013 running (September 13 - 15) was a wet one, too, with inclement weather a factor over two of the event's three days. That didn't keep the enthusiasts away, though, with a sellout crowd of more than 148,000 attending.

Unlike June's Goodwood Festival of Speed, September's Revival is a 'retro' themed event, with cars almost wholly predating 1966, reflecting the Goodwood circuit's 1948-1965 heyday. In addition to the cars, the retro theme extends to the attire of the drivers, mechanics, stewards and more; even the on-track safety car is a classic Ferrari 275 GTB! The appearance and layout of the pits continues the pre-'66 theme, with fans and visitors also dressing 'in period' to add to the atmosphere.

Jim Clark tribute
The 2013 Revival's special theme was for Jim Clark, whose first Formula 1 World Championship came in 1963 - 50 years ago. To mark the occasion, an impressive collection of 30 ex-Clark racers was assembled and paraded each day. While many were Lotus open wheelers or sportscars, there were a few surprises, including a Ford Galaxie, Porsche 356A and DKW 3-6 Sonderklasse saloon, in which the Scot made his first competition outing in 1956.

Highlights included a Lotus 43 that was running in its original spec for the first time in 46 years. Freshly-restored, part of the BRM H16 engine for this rare open wheeler was actually sourced from Australia. Also on show, and driven by Indy 500 winner Kenny Brack, was the gas turbine-powered, four wheel drive Lotus Type 56 that Clark tested at Indianapolis shortly before his death in 1968. As a sidenote, a sister car to the #60 Type 56 at Goodwood was recently consigned to Classic Team Lotus in the UK for restoration to running condition.

Off track
In addition to the punters getting into the spirit of the event in vintage attire, there was a retro-styled Tesco supermarket, roving appearances by the 'Glam Cabs' girls from Carry On Cabbie, as well as the St. Trinians brats from the films of the same name.

There was also a vintage aircraft display and concours, Mt. Everest anniversary display, and 'Settrington Cup' race for kids in Austin A40-style pedal cars. Adjacent to the track, the Earls Court Motor Show saw manufacturers present their classics alongside the latest offerings under a C1965 'Cars of the Future' banner.

The races
Each year, the Revival hosts a diverse range of race classes, covering everything from saloon cars, to pre-war sportscars, GTs, GP cars and one-make specials. Some of these change each year, to honour specific make/model anniversaries and keep the on-track action fresh.

Famous Aussies in action were mainly of the two wheel variety this time around, with Wayne Gardner, Cam Donald and Glen Richards all competing in the 'Barry Sheene Memorial Trophy' for motorcycles, where Barry's son Freddie was also in action. Vern Schuppan flew the Aussie flag on four wheels, driving an AC Cobra in the RAC TT Celebration race.

The following is a snapshot of some of the races and how they unfolded.

Freddie March Memorial Trophy
The first race of the meet, this event for Sports Racing Cars got underway in high wind and heavy rain that had prevented the planned Dambusters Lancaster flyover earlier. Scheduled to run as a twilight, two-driver 90-minute race in the spirit of the day/night Goodwood Nine-Hour races from the early 1950s, the field featured Jaguar C-Types, a Ferrari 750 Monza, Gordini Type 23S, Allard J2 and a pair of Maserati A6GCSs, amongst others.

In the race, John Ure (Cooper Bristol) and John Young (Jaguar C-Type) were quick from the start. An early casualty in the wet conditions was the HWM Jaguar of Roger Buxton/Michael Steele in what appeared to be Kangaroo Stable livery.

Shortly after most entrants made their compulsory driver change, Nick Wigley, who had taken over the Ure Cooper Bristol, crashed heavily. This, combined with torrential rain, led to the race being declared early, handing Young/Buncombe the win. A podium lockout for Jag C-Types was completed by Hancock/Ziegler and Cussons/Blakeney-Edwards.

St. Mary's Trophy
A two-part race shared between 'name' drivers and vehicle owners, with results decided on aggregate, each segment of the popular 1960-66 saloon car race this year was dominated by the big Ford Galaxies. However, the tortoise that beat these hares was an Alfa Romeo 1600 GTA, shared by Frank Stippler and Alex Furiani.

St. Mary's part 2, run on Sunday, saw Bill Shepherd (Ford Galaxie) blast away to try and build the lead he needed to take the win over Furiani's Alfa, but a safety car period to clear a rolled Mini Cooper S condensed the field, allowing the Stippler/Furiani duo to take the overall win with a pair of second-place finishes. Third overall behind Mass/Shepherd was the Kristensen/Steele Galaxie, followed by the Oliver/Clark BMW 1800 TiSA and Mini Cooper S of Gavin/Swift.

RAC TT Celebration
One of the great races of the 2013 Revival, the high wind and mixed weather tested the driver pairings in the hour long race that paid homage to the RAC TT events that Goodwood hosted between 1960 and '64. A high-quality, big-dollar field (estimated at more than _150 million - AU$255 million) of thirty GT cars included Ferrari 250 GTO and GT SWBs, Jaguar E-Type Lightweights, AC Cobras, Aston Martins and more.

At the start of Sunday's marquee race, the Ferrari 250 GTO/64 piloted by Jean Alesi bolted. Judged to have jumped the start, the ex-F1 driver was penalised, allowing the AC Cobra of David Hart/Tom Coronel to take the lead. Soon after, heavy winds pushed the foam chicanes onto the racing line, leading to a safety car period as the skies darkened.

At half race distance, Chris Harris (Lister Jaguar Coupe) was in the lead, handing over to Anthony Reid as Tom Kristensen buried John Young's Jaguar E Type in a gravel trap. Rain started to fall soon after, getting heavier and heavier in the closing stages. This worked to the advantage of Simon Hadfield in Wolfgang Friedrichs's 'Project 212' Aston Martin.

As cars were spinning off around him, Hadfield, who'd almost been a victim of Kristensen's earlier off, worked his way back into the top ten, then picked off those ahead of him and closed on the leading Reid. Thinking the Aston was a lap down, Reid actually let Hadfield past before realising his mistake.

In the sodden conditions, Reid couldn't reverse his mistake in the remaining couple of laps, and Project 212 scored an impressive victory. This particular car has a long Revival history, without success, so the win was an emotional one for Friedrichs and Hadfield, and particularly fitting in Aston Martin's centenary year. The Schuppan/Devis pairing finished 16th.

Whitsun Trophy
For many, this race was the highlight of the 2013 Revival. Part of a broader GT40 celebration that included close to 50 cars, the sight alone of almost 30 genuine GT40s on the grid (including a prototype, roadster and MkIV interloper) was good enough, but when the field roared to life it was truly spectacular.

Billed as the first ever all-GT40 race, the Whitsun Trophy boasted some serious driving talent, including British touring car drivers Rob Huff, Steve Soper, and Mike Jordan, who qualified on pole. The race was closely-contested early, but in the end it was the pairing of Kenny Brack and F1's Adrian Newey that prevailed, aided in no small part by a slick driver change.

Richmond Trophy
For front-engined GP cars from 1952-60, the Richmond Trophy featured an Aussie connection in the form of Francesco Baldazana's Alta GP. Originally built in 1953, the twin supercharged open wheeler was raced in the 1956 and '57 Australian Grands Prix, by Julian Barrett and Syd Anderson, respectively. The car was later part of Peter Briggs's Perth Motor Museum collection, before it returned to the UK in the 1980s.

In the race, the Alta struggled against a high-quality field that included Maserati, Aston Martin, BRM and Lotus-Climax. Gary Pearson's BRM Type 25 was a comfortable victor from the 'Tec Mec' Maserati 250F of Tony Wood, followed by Roger Wills, who drove most of the race with a snapped gear lever in his Lotus-Climax 16.

Hard-luck story was Julian Bronson, who ran his Scarab-Offenhauser off the track while leading and eventually finished fourth.

Sussex Trophy
The rain was back for the final race of the meet, the Sussex Trophy for 1955-60 Production Sports Racers. Thus most drivers proceeded with caution, especially those in rare cars like the ex-Max Balchowsky 'Ol Yeller' Buick, Maserati Tipo 61 'birdcage' and Mercedes-Benz 300SLS 'Porter Special'. Julian Majzub qualified the Sadler-Chevrolet on pole, but the race turned into a battle between Anthony Reid (Jaguar D-Type) and Emanuele Pirro (Lister-Jaguar) when Majzub was forced to start from pit lane.

Rob Hall (Maserati 300S) bolted to make up more than a dozen places in a single lap and was threatening Reid's lead halfway through the wet 14-lapper. After moving to the front, Hall tangled with the Devin Chevrolet SS of Malcolm Gammons in the closing stages, allowing Reid to take back the race lead and hold it to the chequered flag.

Goodwood - either the Festival of Speed or the Revival - is one of those 'must do' events for every car enthusiast. If you've been to one, or both, you'll already know how special it is. If you haven't, a trip to Goodwood should be on your bucket list. 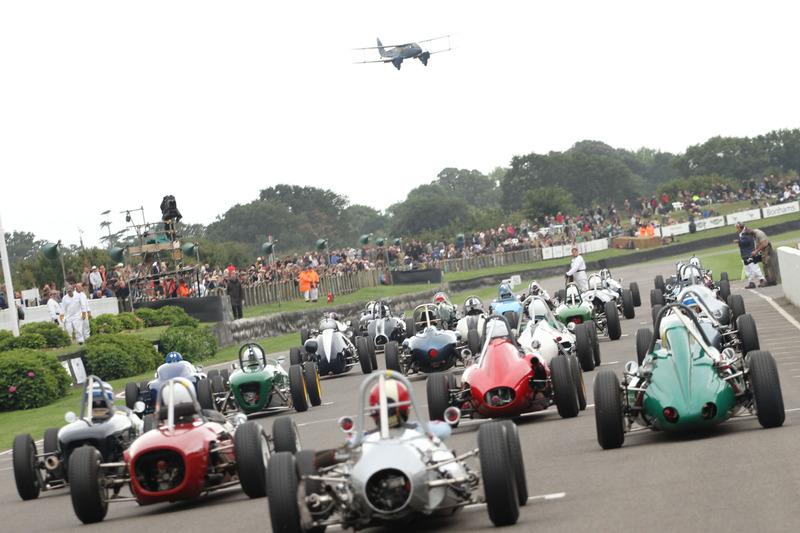 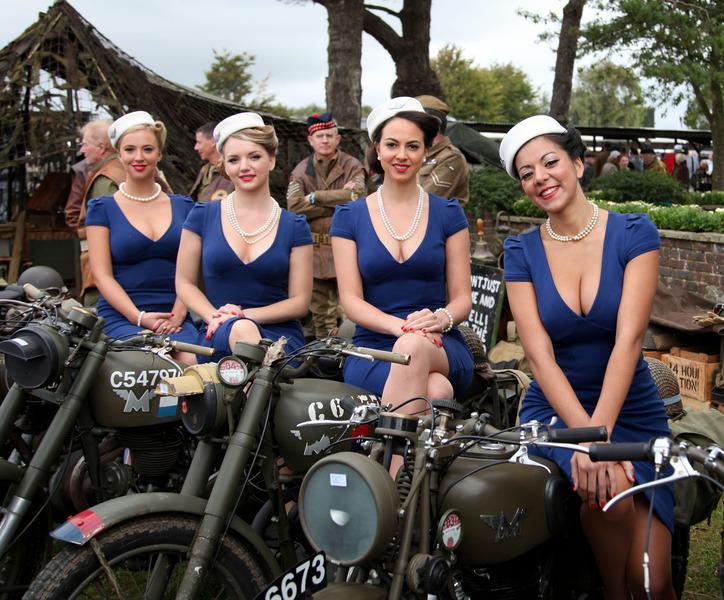 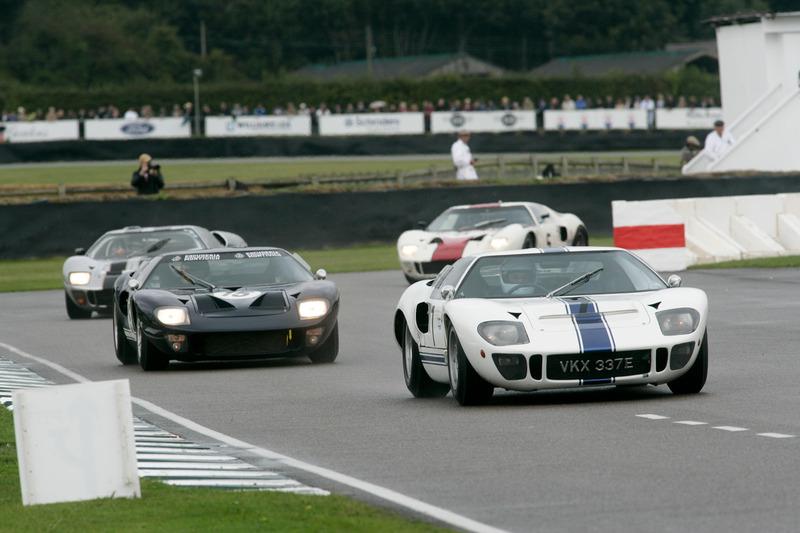 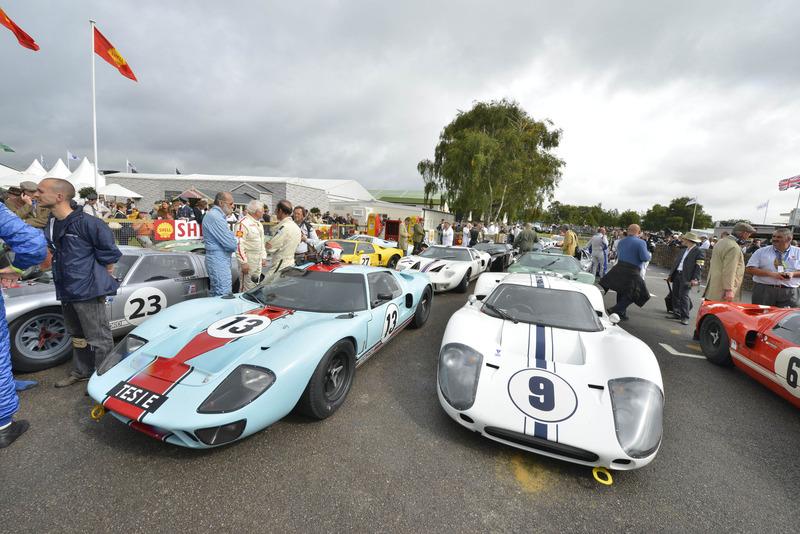 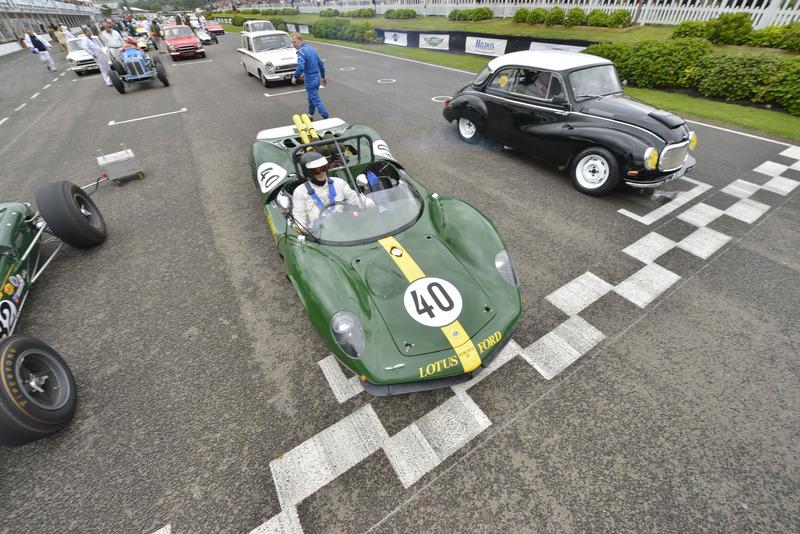