Hi-Po turbo Beetle up for grabs in SEVEN82MOTORS auction

Hi-Po turbo Beetle up for grabs in SEVEN82MOTORS auction

SEVEN82MOTORS’ latest online auction closes today, 6 September (from 7:00PM), so there’s still time to bid on the 36 vehicle lots on offer, including this hot performance Beetle. 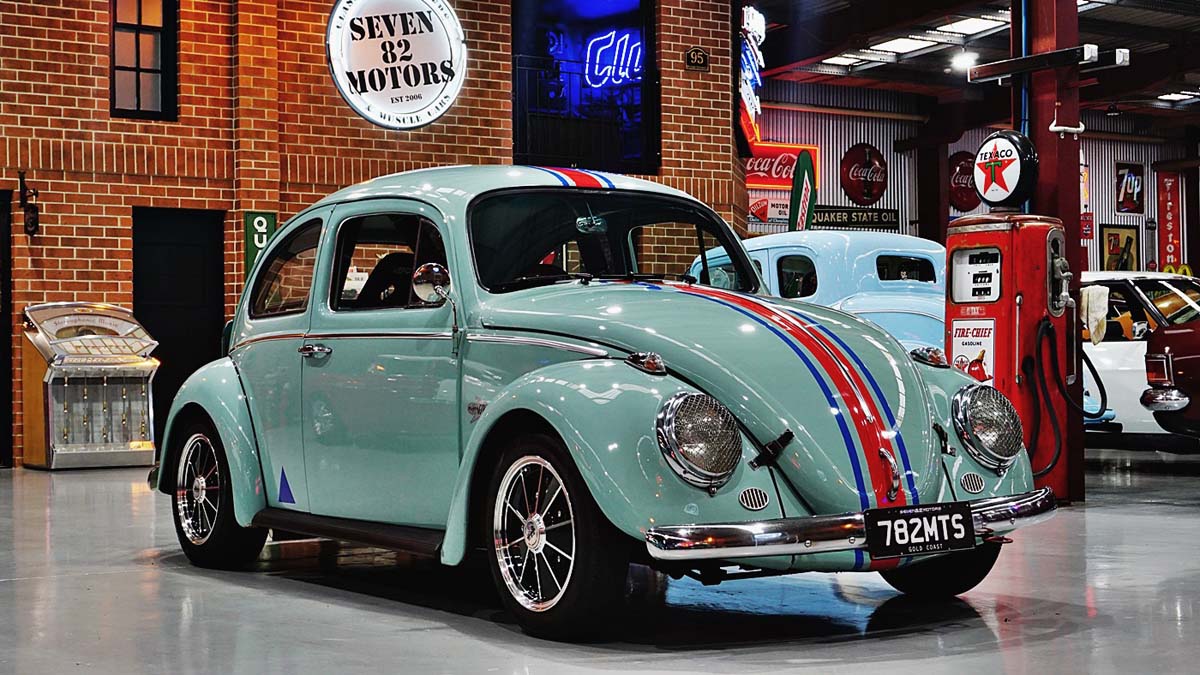 A serious bit of gear, this 1960-model VW Beetle has undergone an extensive transformation with a focus on performance. It has previously competed in Targa Tasmania, along with a host of other events. 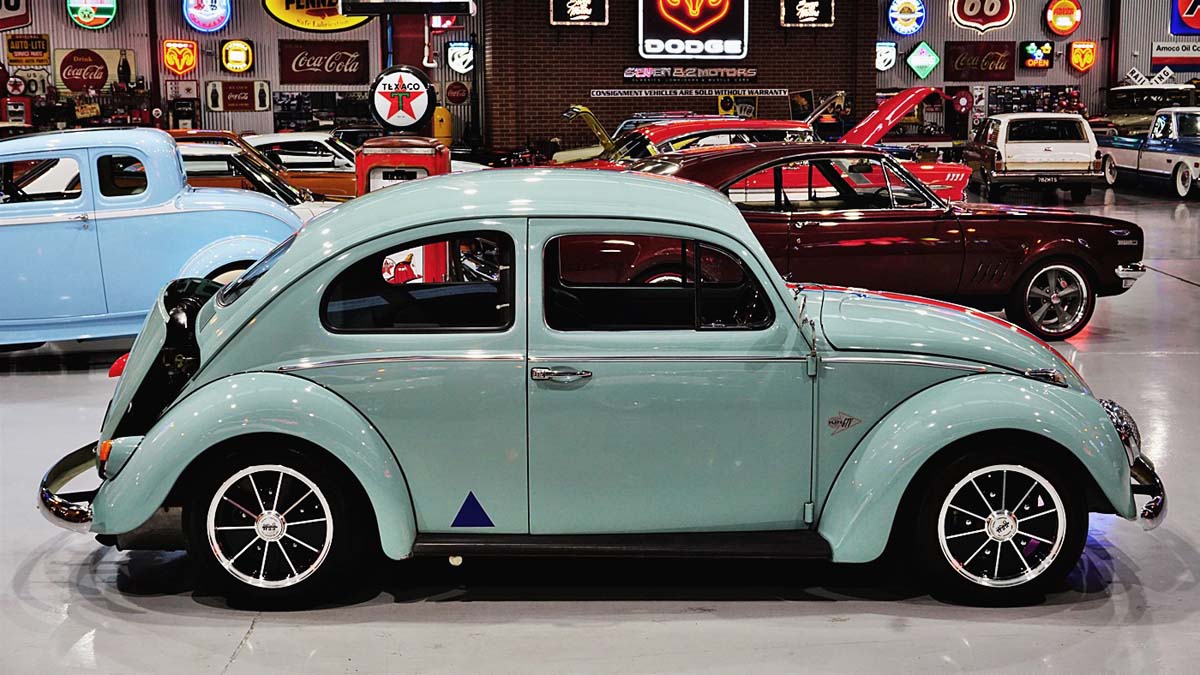 The car was built in Brisbane in 1997 by Guy Harding (Now Harding Performance), who then raced it in the 1998 Targa Tasmania, where he won the "Classic 1300" class. While the Beetle still presents the same as it did during its Targa campaign, the running gear has received some serious upgrades. 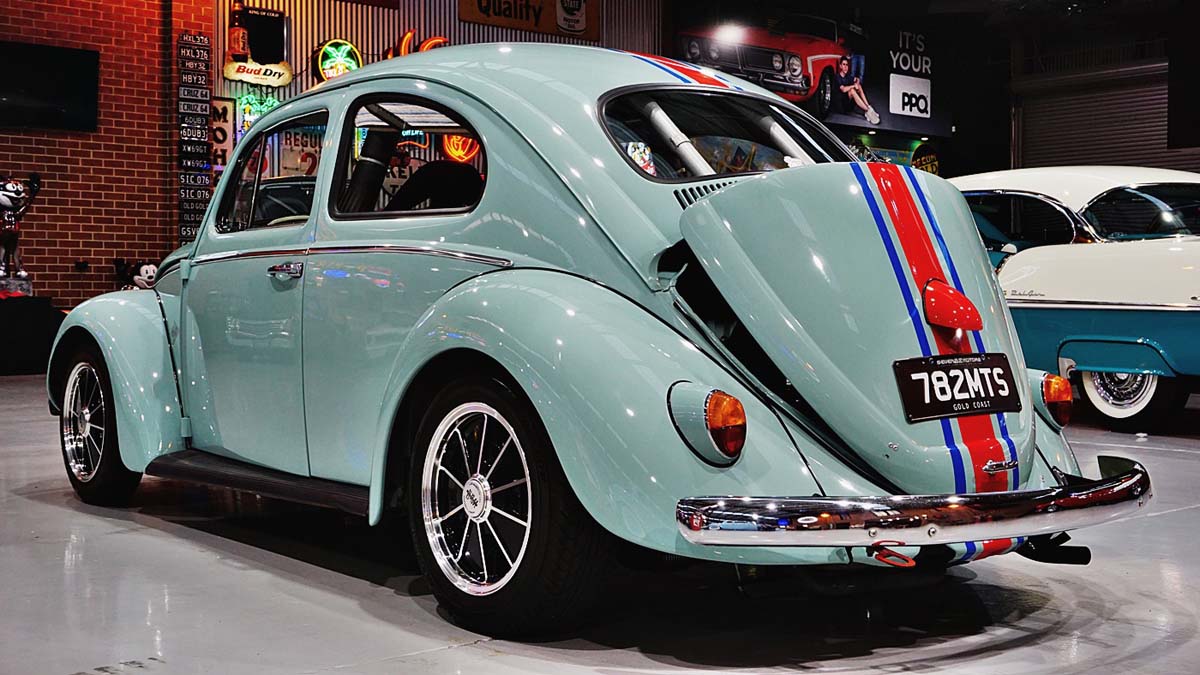 The body is solid and presents well, however it is to be noted there is some imperfection and blistering present in the paintwork up close in the right light. The chrome bumpers and trim are well presented and in good condition. 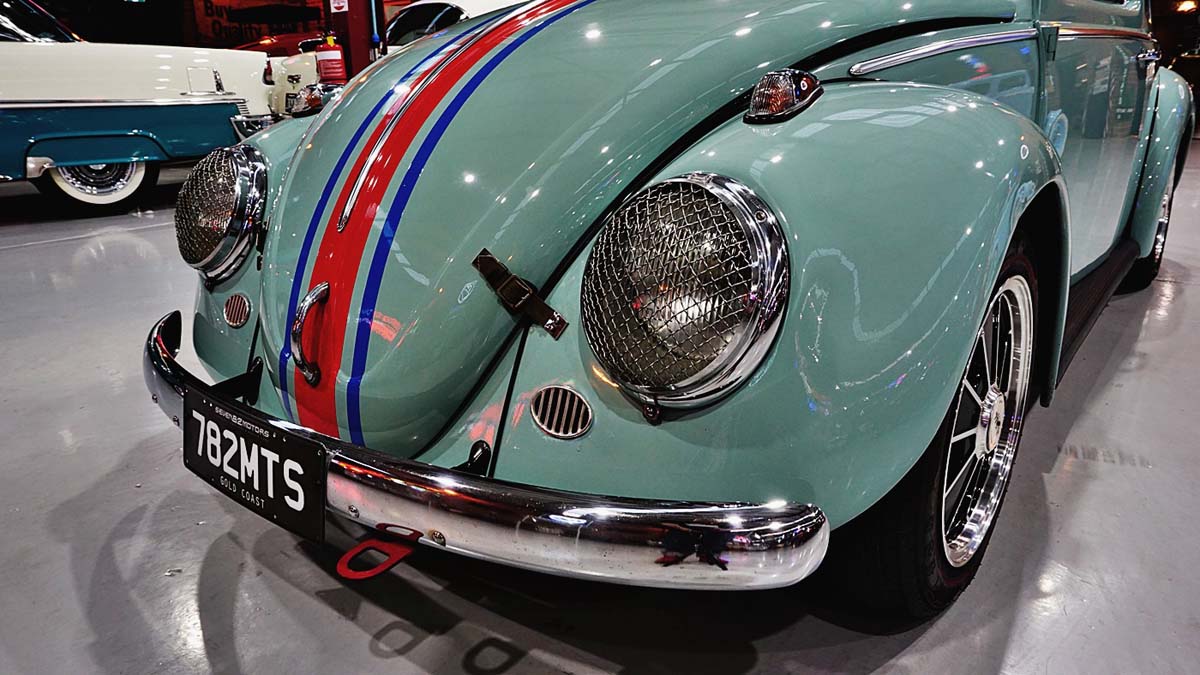 Inside, this Beetle is all business, with the rear seats removed and a half roll cage fitted. The rear is neatly painted to match the outside and carries the battery with isolation switch, as well as the ignition box and coil. 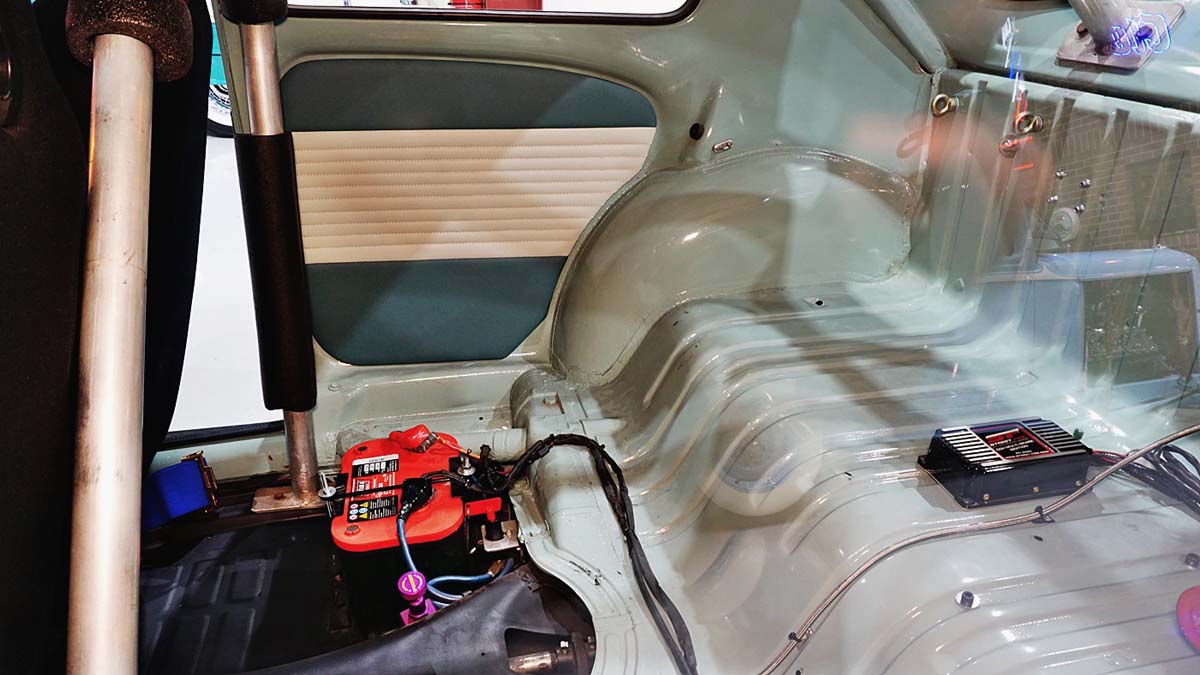 In the front is a pair of racing bucket seats with Sparco harnesses. Carpets are no longer present and exchanged for a painted floor for that race car feel. The dash has some aftermarket gauges to keep an eye on the vital signs and a shift light hidden behind the vent. Under the bonnet, the factory fuel tank has been replaced with a large aluminium fuel cell. 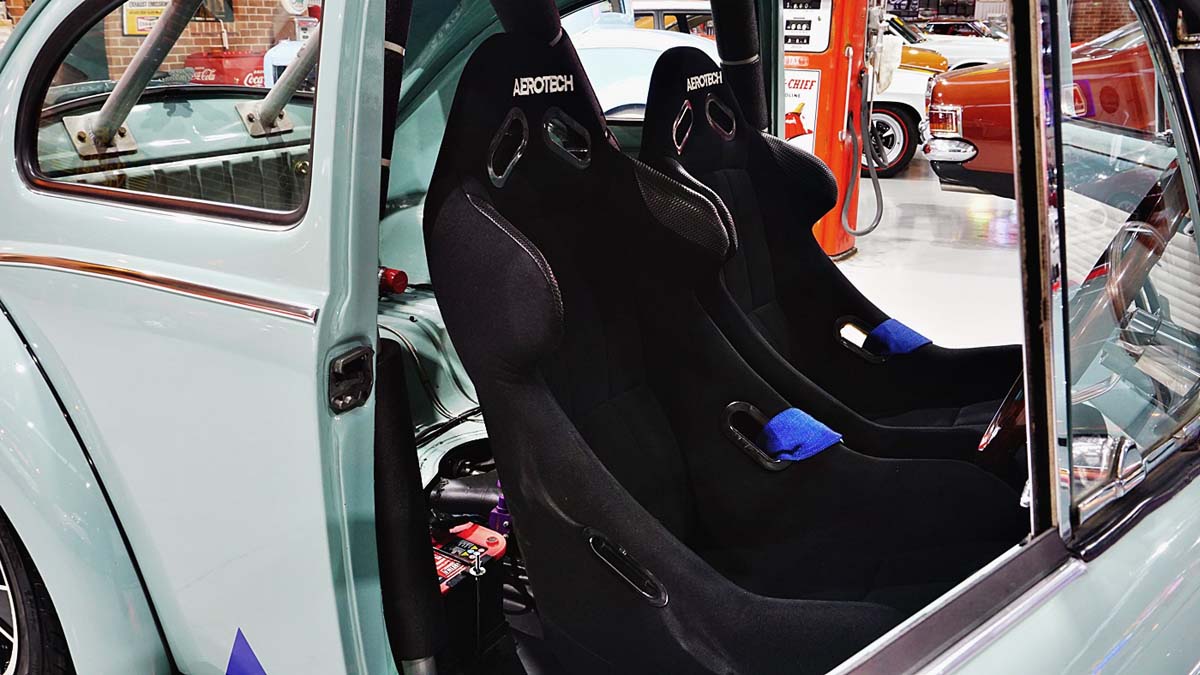 The fun begins when you remove the boot lid to reveal the extensive amount of work and go-fast goodies underneath. The engine is a 2.3L Scat stroker. A CB Performance aluminium case with raised deck, deburred and spot faced then tapped for full flow, is paired with a CB performance 84mm balanced crank. Rods are CB Performance H-Beam 5.6 items with 94mm Mahle stroker pistons and rings. 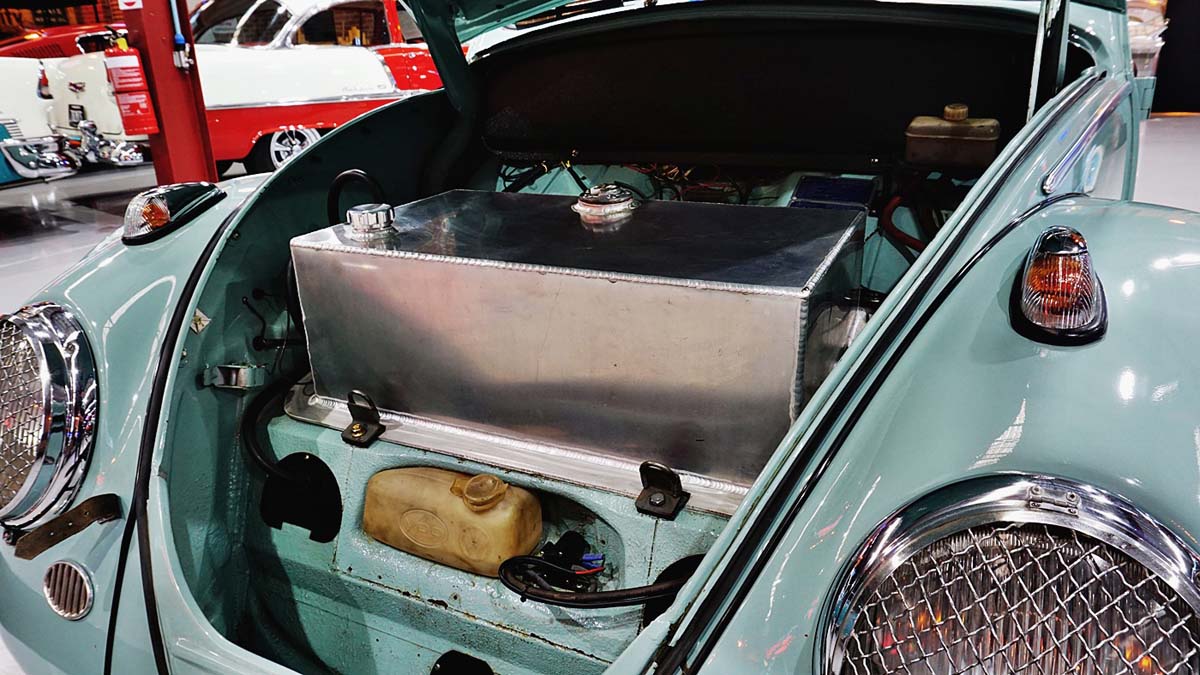 The cam is an LBC 3.5 turbo with LBC lifters. Bugpack street eliminator heads were turbo prepped, ported and deburred. A .060 Copperhead gasket seals the oil inside. Scat 1.25 ratio rockers with swivel foot adjusters and chromoly push rods keep the valvetrain working. Ignition is provided by an MSD distributer locked out at 24 degrees. 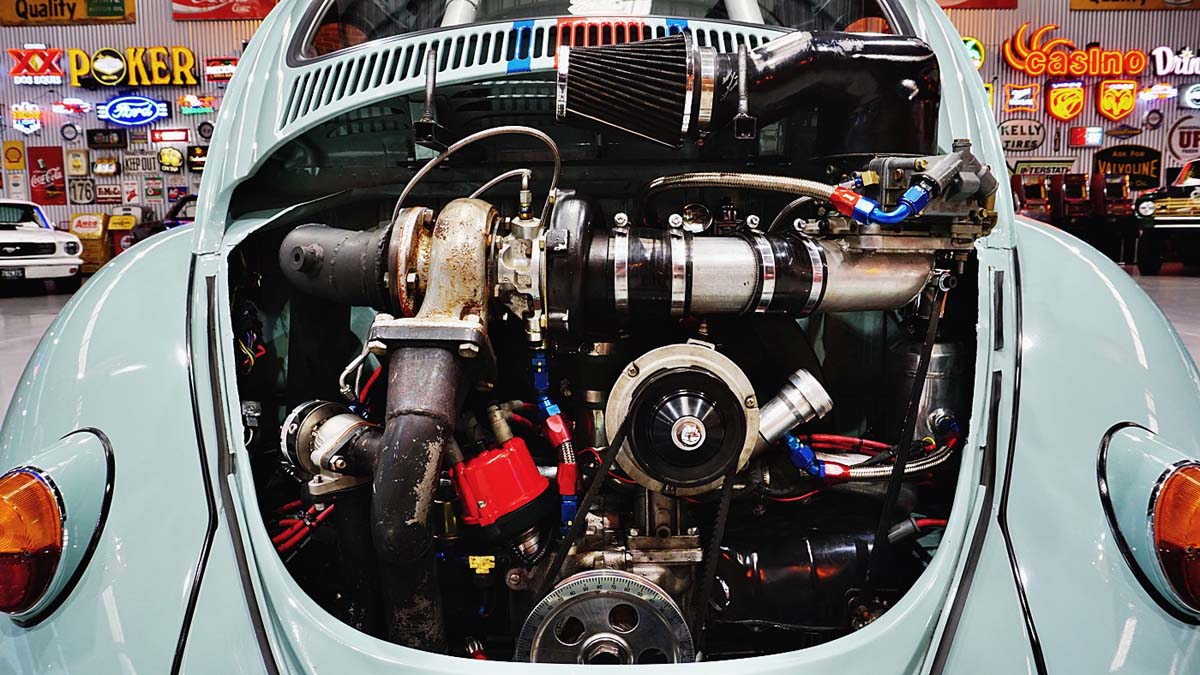 Up top, a turbo prepped Holley 500 2-barrel carb is force fed by the T04B Garret turbocharger currently set to 8psi for street use. A 38mm wastegate controls pressures that can easily be upped to in excess of 20psi. A 3 quart deep sump along with external oil filter and 30mm Melling oil pump keeps everything lubricated. Fuel is provided by a Holley blue fuel pump with regulator set at 7lbs. Finally, a hidden 3-inch exhaust system allows the gasses to flow freely while the wastegate outlet is positioned out the back to appear like a factory style exhaust. 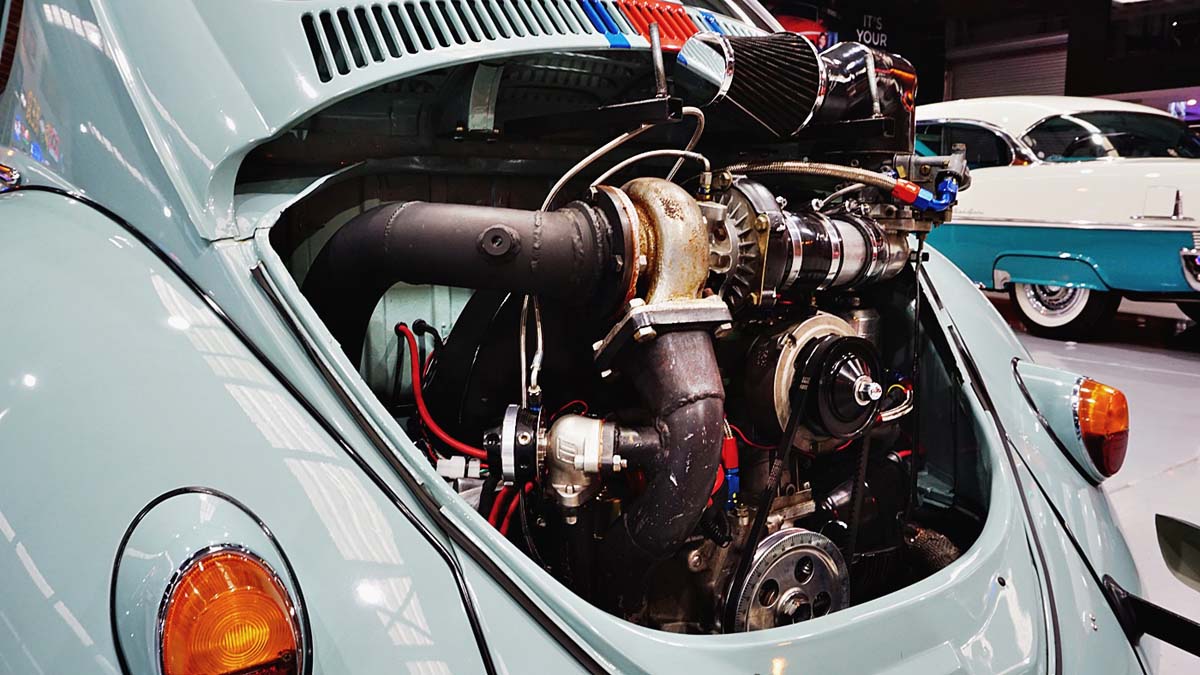 The trans and drivetrain have all been upgraded to include a Rancho-built pro street swing axle, 3.88 ring and pinion and Super Beetle main shaft. A Sachs throw-out bearing and Stage 3 heavy-duty clutch control things. Inside the gearbox are 4 spider gears, with 3rd and 4th welded. 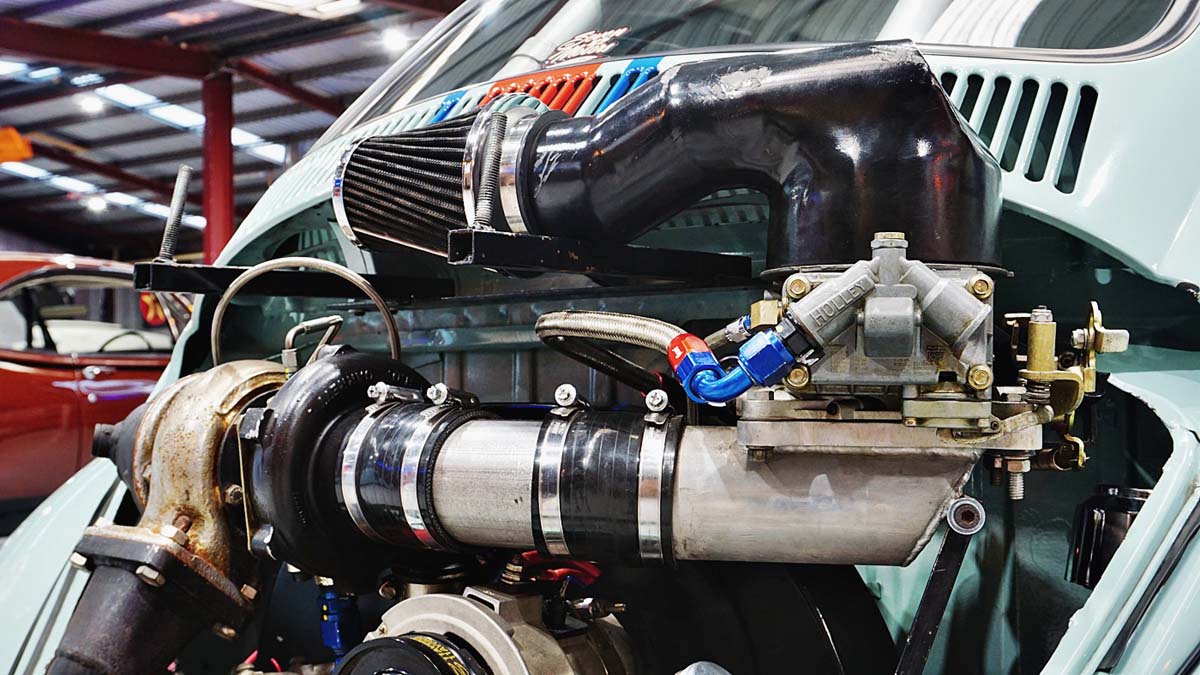 The shifter itself is a billet short throw item with reverse lock out. Swing away chromoly axles get the power from box to wheels. 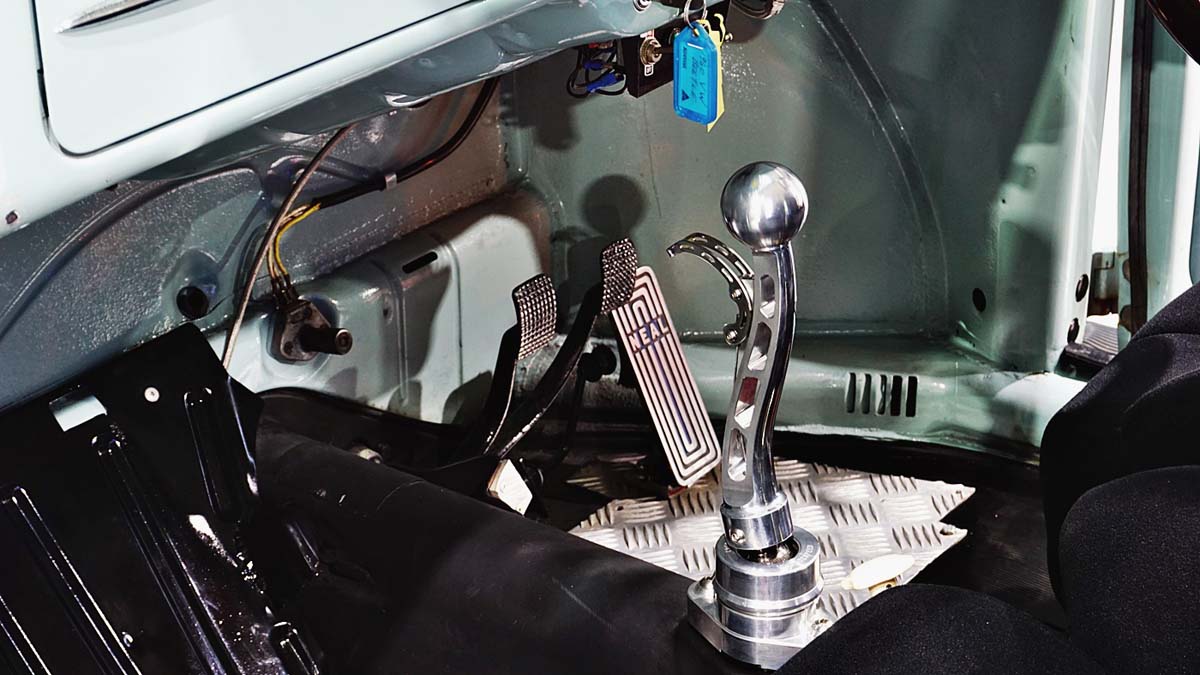 Pulling up all that horsepower is a set of four-wheel disc brakes with adjustable bias. Suspension has all been upgraded including heavy duty sway bars and the Bug sits low over a set of Empi Speedwell wheels. 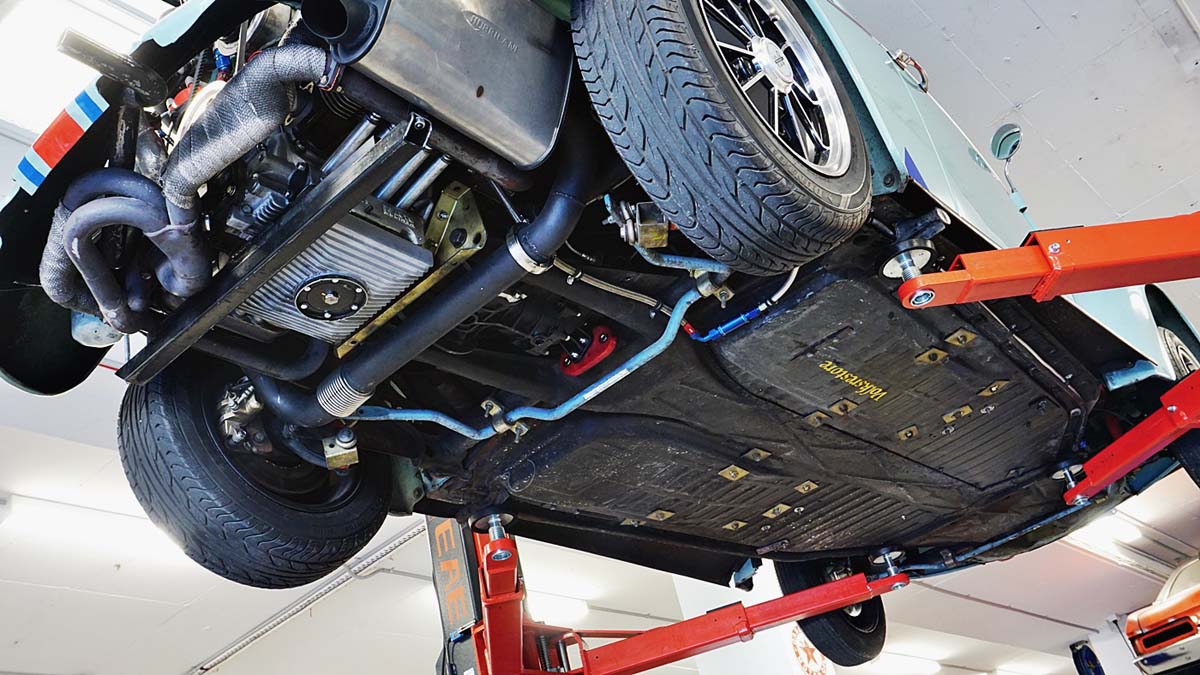 Bidding on this car closes today (6 Sept) and there is a reserve. For more details, click HERE.