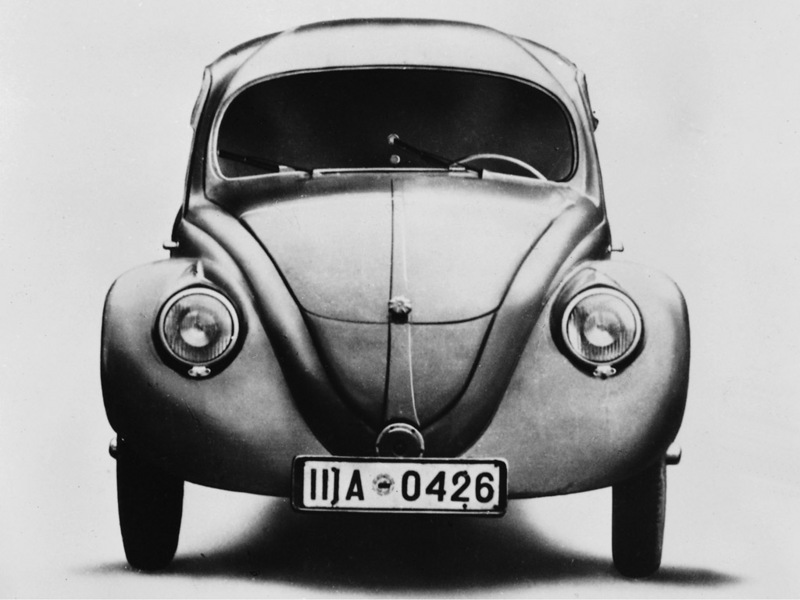 Both Opel (by then in the hands of General Motors) and Daimler-Benz were keen to win the contract but it is likely Hitler already had another idea
Adolf Hitler's first major public function as Chancellor of Germany was the opening of the 1933 Berlin Motor Show on 11 February. He had been in the job less than a fortnight and he used the speech to announce his intention to support production of a People's Car.

Both Opel (by then in the hands of General Motors) and Daimler-Benz were keen to win the contract but it is likely Hitler already had another idea. He had met Dr Ferdinand Porsche at a motor racing meeting in 1925 or 1926. Although Porsche forgot the meeting, Hitler did not. Obsessed with cars, even though he himself never drove, it is probable he was swept away by his meeting with the already famous designer. Dr Porsche was invited to meet Hitler at the Chancellery. The latter insisted Porsche submit a design for consideration. Initially Hitler was not in favour of the rear engine but he was quickly persuaded. Compared with the boxy little Opel he had already seen, this swoopy little car looked like a cut-price racing car. Indeed, it took many cues from the Porsche-designed Auto-Union Grand Prix cars which were so successful. Hitler was keen on design. He wanted to present his Third Reich as futuristic, cutting edge. It was not only the design that earned the Fuhrer's favour. The Opel proposal quibbled with the price limit of 1000 Deutschmarks but Dr Porsche, while knowing this figure to be impossibly low, wisely said nothing on the subject.

He had produced a manifesto dated 17 January 1934 in which he spelled out his concept: "My interpretation of a people's car is a useful vehicle able to compete with any other car on the same level. If the traditional car is to be made into a people's car, then fundamentally new solutions will be necessary." These included an air-cooled, horizontally opposed four-cylinder engine mounted in the rear which would power a 650 kg car to a maximum speed of 100 km/h with average fuel consumption of less than 14 litres per 100 kilometres. This car, which Porsche called the Type 60 (and which would become the VW 30 prototype), would be able to climb a 30 per cent grade in first gear. It would have all-independent suspension, in an era when most cars did not even have independent springing at the front, let alone the rear. Porsche's costings put the car at 1550 marks. But in the contract he signed on 22 June 1934 this sum had plummeted to 900 marks based on production of 50,000 vehicles.

It was, Hitler insisted, to be called the "KdF-Car" (meaning "strength through joy', yes, fair dinkum!) Daimler-Benz would participate in the project by making and supplying many components including the bodywork. Opel had sought a contract to manufacture the car but missed out, largely because the company would not meet the strict requirements regarding the location of a dedicated factory (out of reach of Allied bombers because Hitler was already planning World War II). In 1937 30 VW30 experimental cars took to the roads. Driven by SS officers they covered a staggering two million kilometres. The foundation stone for the Wolfsburg factory was laid on 26 March 1938. It was ready for production by 1939 but the vehicles that emerged the following year were 4WDs for the war. Of course the 1000-Year Reich only lasted 12 and none of the hapless would-be KdF-Car owners received a vehicle. Litigation against the factory continued until 1961.
By H D Young