"Don't get into a Sandman," was the explicit advice many mothers gave their daughters in the seventies, when perhaps Australia's most celebrated 'sin bin' hit the road. The panel van was a distinctly Australian adaptation of the classic Ute - a pickup based on a car chassis - and was particularly popular with younger car buyers in the 1970s.

Holden and Ford built the first panel vans in the late 1950s, but it was a decade later when they finally gained widespread popularity. Most Utes of the day had available optional metal, later rigid plastic and fibreglass shells that fitted over the tray of the Ute, extending the storage capacity of the tray and providing protection and security. These canopies evolved to include side windows, and a rear swing out window to aid the driver's rear vision. They were eventually integrated into the body of the Ute to form a unique wagon like hybrid vehicle that became known simply as the panel van.

While initially they were used as delivery vans, many found homes with local police forces as 'paddy wagons'. It wasn't until the seventies, based on the Holden Kingswood and Ford Falcon that the panel van was regarded as an Aussie icon popularised by surfers and especially young males. Of these, the Holden Sandman is undoubtedly the most celebrated example. Mel Gibson drove one in the 1979 movie Mad Max - a customised 1975 HJ model, while Ford tried to counter their success with the Ford Sundowner panel van. To a lesser degree, their success was challenged by the 1976 CL Valiant panel van, marketed as the Chrysler Drifter.

The seventies were a time when popular songs heralded the virtues of free love, smoking pot, hippies, flower power and communal living. Against this background the panel van attracted young drivers, with one of their attractions being the ease with which a mattress could be installed in the cargo bay - hence the warning by mothers to their daughters! In popular vernacular the panel van was also known as 'sin bins', and 'shaggin' wagons', amongst other more lurid descriptions!

It was possible for passengers to climb into the back from the cabin, and in the mid-seventies it became fashionable to decorate the exterior sides with murals air brushed with intricate detail.

Holden introduced the first Sandman panel van in the 1971 HQ series, building on the success of its predecessor, the HG Kingswood van.

Belmont and Kingswood utes were now on a new 114-inch wheelbase chassis. Initially developed as a commercial option, the Sandman ute and van were more upmarket 'recreational' vehicles based on the GTS sedan and coupe, boasting interior and exterior features similar to the SS, although only available with the standard 2.8-litre 173 six-cylinder engine. The original HQ Sandman was produced for only nine months of 1974, which adds to its scarcity and certainly improves its collectability. Fromwhat seemed like very basicbeginnings, the panel van was about to take on a persona of its own.

This came with the release of the HJ Sandman in October 1974. The HJ was essentially a facelifted HQ distinguished by a different grille, wraparound front and rear lights, new front guards and bonnet, and large bumper bars. Inside, there was a new instrument panel, more supportive seats and upgraded equipment levels. 'sandman' versions of the van and Ute were heavily marketed to increase Holden's presence in the rapidly emerging recreational market.

To capture young buyers,the Sandman came equipped with a host of GTS options and was advertised under the 'sport, sand, surf and (implied) sex' theme, and rapidly became a cultural icon in its own right. Available in both Ute and van models,the Sandmanlooked great with GTS styling, slotted mudguards, bucket seats, GTS steering wheel and full GTS instrumentation. Strangely enough, given the popularity of the Monaro, the Sandman actually aided its demise, becoming the more popular two-door variant in the Holden range in 1974.

Collectors of Sandman vehicles advise that it is easy to mistakenly think you are buying a similar era van, but suggest a few simple checks can confirm authenticity. First up, all original HJ Sandman vehicles have an 'XX7' or 'XU3' stamped on the Body Identification Plate, and a H1 - H4 Vin Code. All of these vehicles were built in Brisbane. Vehicles with an 8WN80 or 8WN70 ID plate built after September 1975, may look the goods, but are in fact a Kingswood, rather than a Sandman.

The HJ Sandman was manufactured from 1974 continuing through to 1976. There were two series of the HJ model, the first commencing in October 1974 and ceasing in August 1975. The early releases were Kingswood Sandmans. From September 1975 they were only Holden based and included the XU3 variant with a reduced GVW of around 2200kg over the standard model.
The HJ Sandman was available with a choice of 2.8 and 3.3-litre six cylinder engines and two V8s - the 4.2-litre '253' and the potent 5.0-litre '308'. Power ranged from 81 - 161kW and top speed of the V8 was an impressive 201km/h. They were mated to a choice of three or four-speed manual, or three speed tri-matic automatic transmissions.

Introduced in July 1976, the HX Holden Sandman kept all of the previous model features, minus the fluted guards, but added stronger colours and louder decals. The introduction of ADR 27A meant that manufacturers had to comply with reduced exhaust emissions, which resulted in all Sandman engines being modified and subsequently delivering less power. Externally the HX had a bolder grille, revised hubcaps and other minor modifications. The biggest improvement for the driverwas a steering column control stalk on all models, providing fingertip control of the wipers, washers, turn indicators and hi/lo headlight beam. The Sandman continued to sell well, with transmission and engine choices the same as for the HJ, albeit with ADR low emission modification.

The final production of the Holden Sandman series was the HZ model introduced in October 1977. Both the panel van and ute models were only offered with GTS trim and a standard 4.2-litre V8. The HZ was the final revision of the HQ series and gained a four headlight front grille and front air dam spoiler. The big news with the HZ was the introduction of Holden's RTS (Radial Tuned Suspension), which significantly improved ride and handling. An option pack was available for the Sandman at a cost of $1,700 (1977) which added a 5.0-litre V8 engine and a limited slip differential.

By the end of 1979 the Sandman's popularity had largely waned with firstly the ute phased out, followed soon after by the panel van, with the last being manufactured in October 1979. At its peak, the HJ Sandman was - and remains - a highly desirable cult wagon, so much so that Holden actually released a Sandman show car in 2003, which while looking fabulous, was never released. 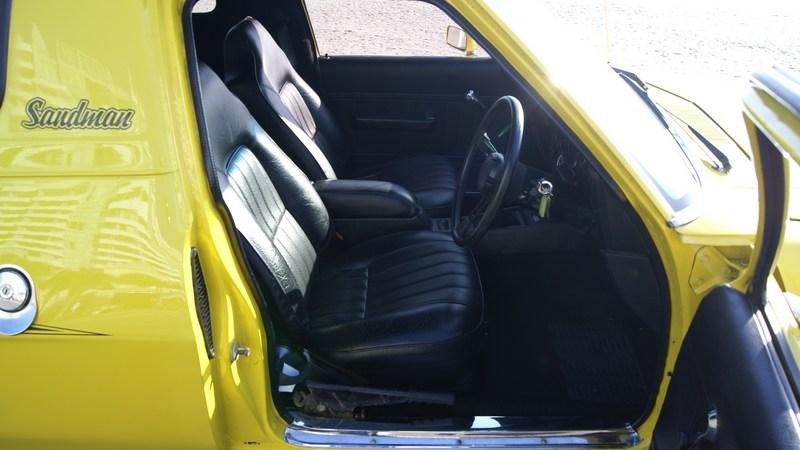 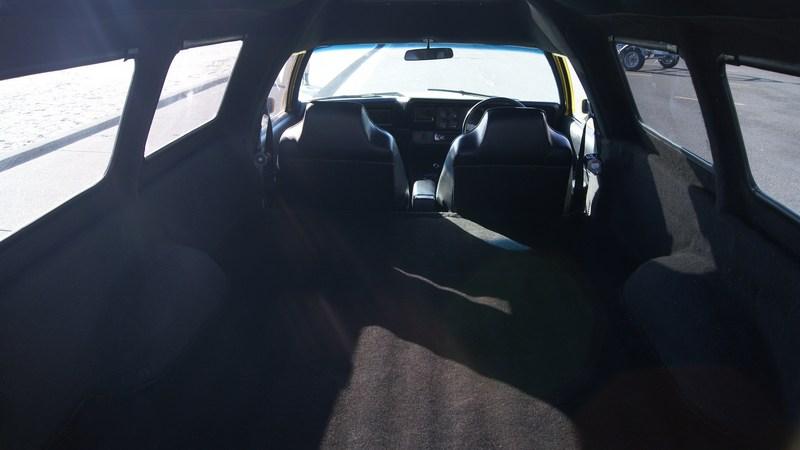 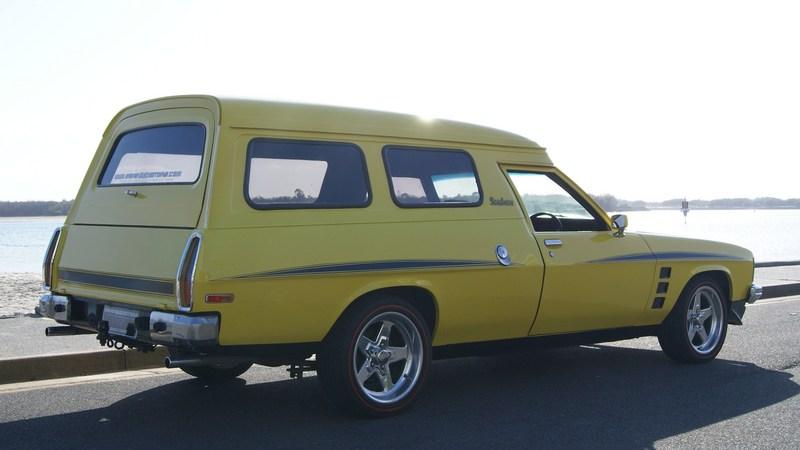 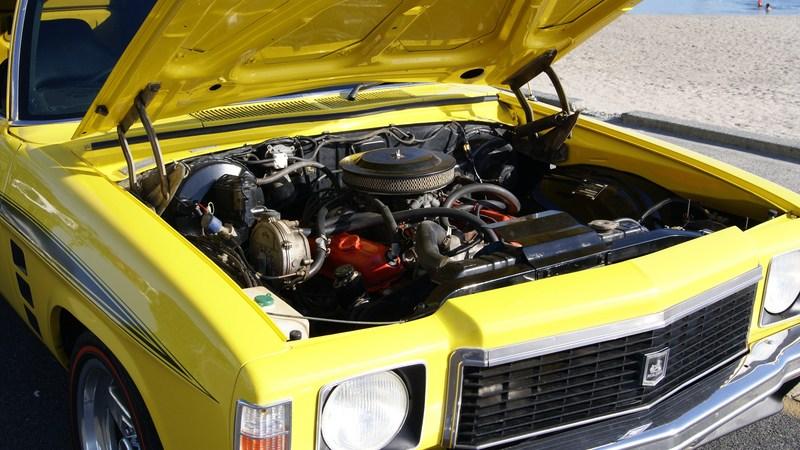