Burns & Co. Auctions’ Classic Car and Motorbike Auction on Sunday 10 April has a diverse consignment list of new and old vehicles, as well as collectables and automobilia up for grabs. Amongst the cars on offer, there’s a tasty selection of classic and newer Holdens, led by two Aussie muscle icons. 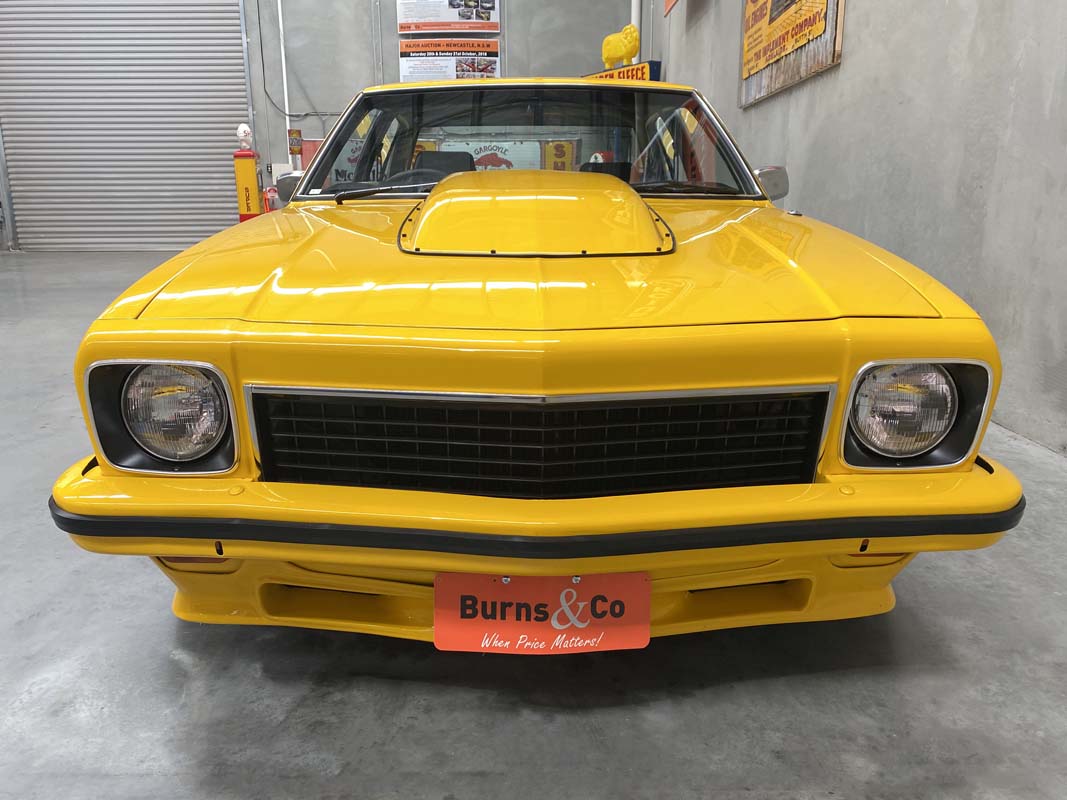 Pre-bidding for registered bidders is open now, with selling commencing from 12 Noon on Sunday, 10 April, at Burns & Co’s Melbourne auction rooms in Bayswater. 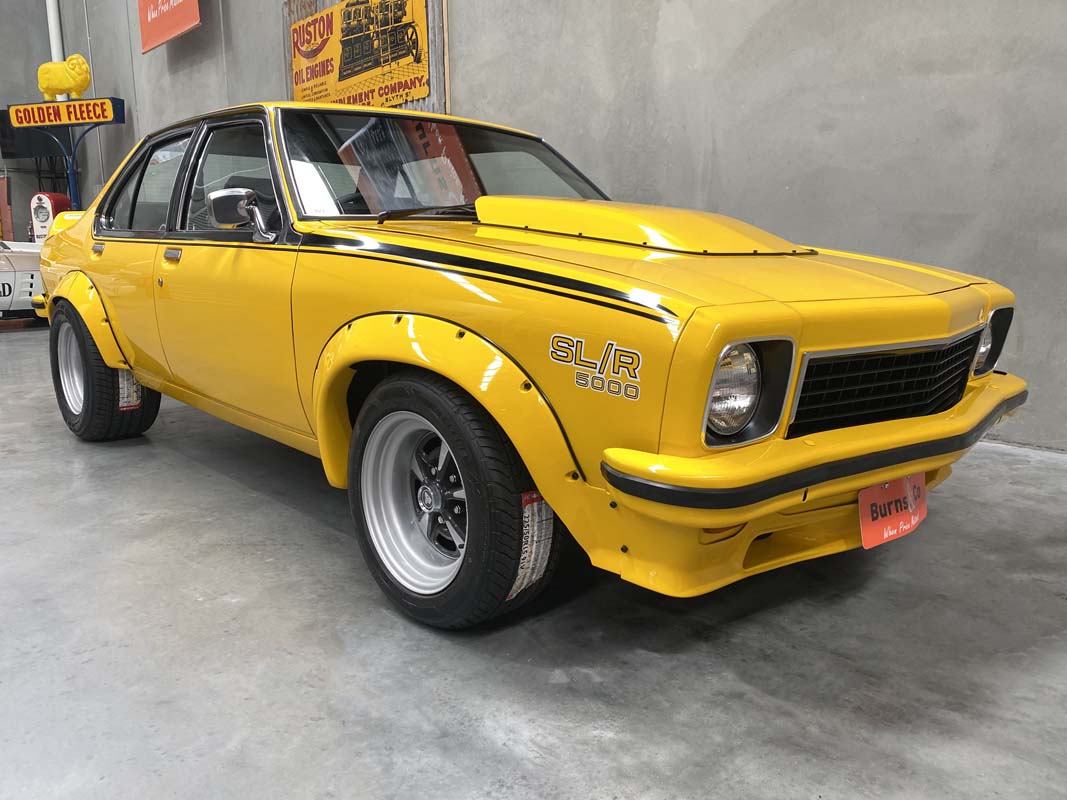 Finished in yellow with a black vinyl interior, this genuine 04/74 -built SL/R 5000 has been subject to a full rotisserie restoration by the consignor, with everything either replaced or reconditioned.

Fitted with the correct 308 V8 and 4-speed manual, a spare 308 block will be included with the sale. 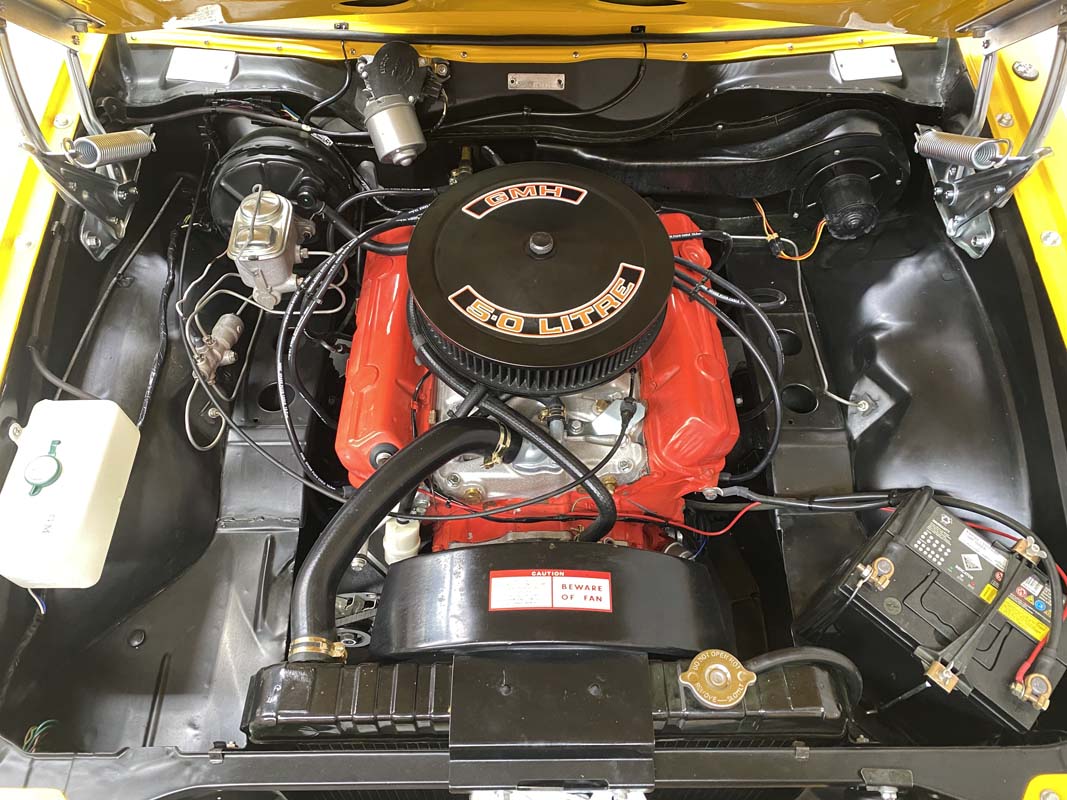 With only 5,020km covered since the restoration was completed, this car is described as rust-free and in excellent condition. 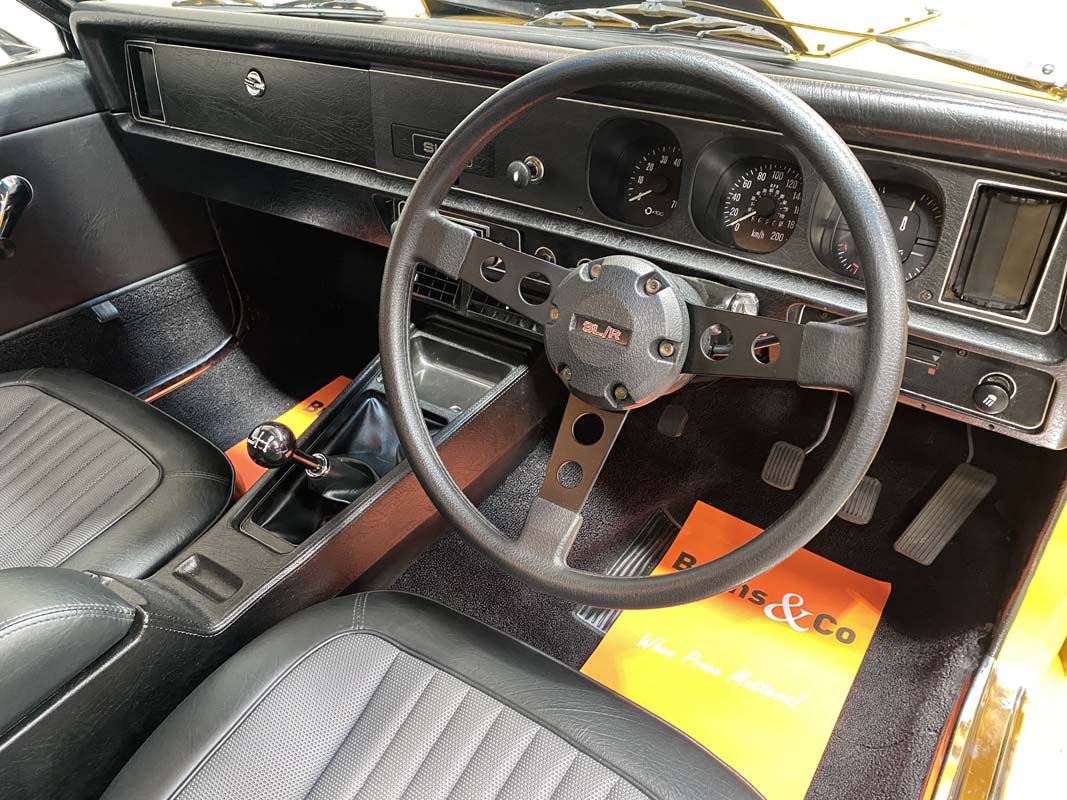 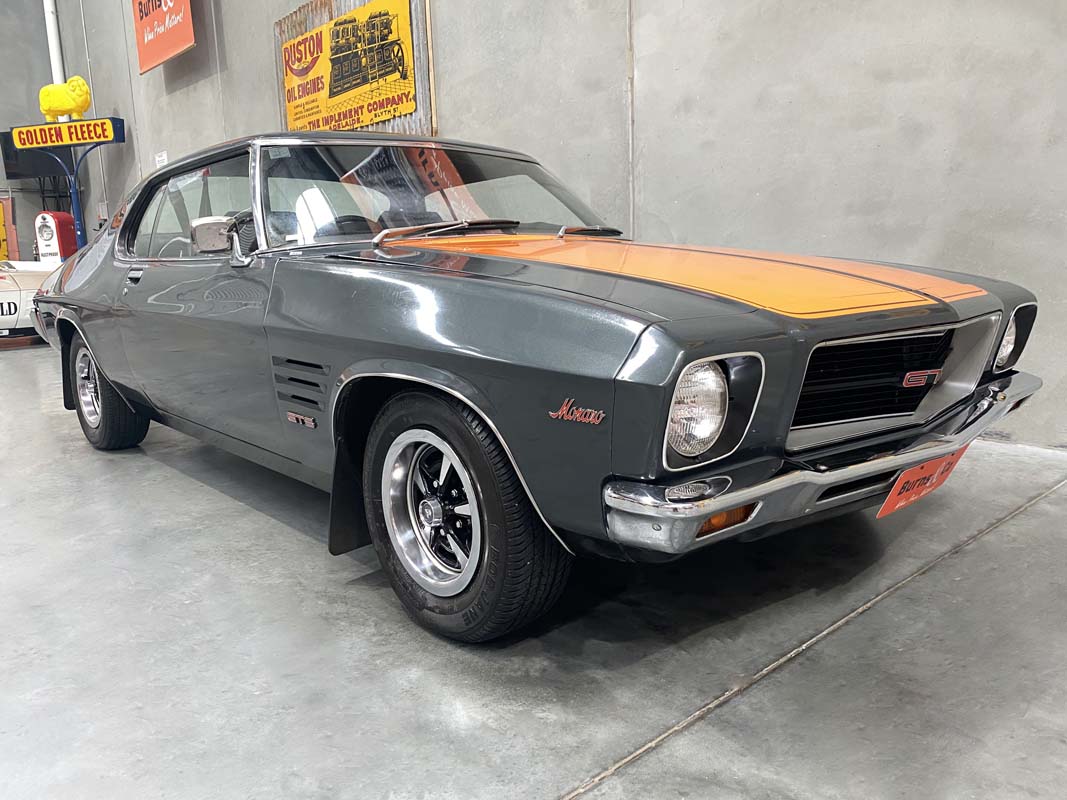 Believed to be an unrestored survivor, this Monaro GTS coupe is said to still be wearing its original Gunmetal metallic paint with orange stripes, as well as its original black vinyl interior. 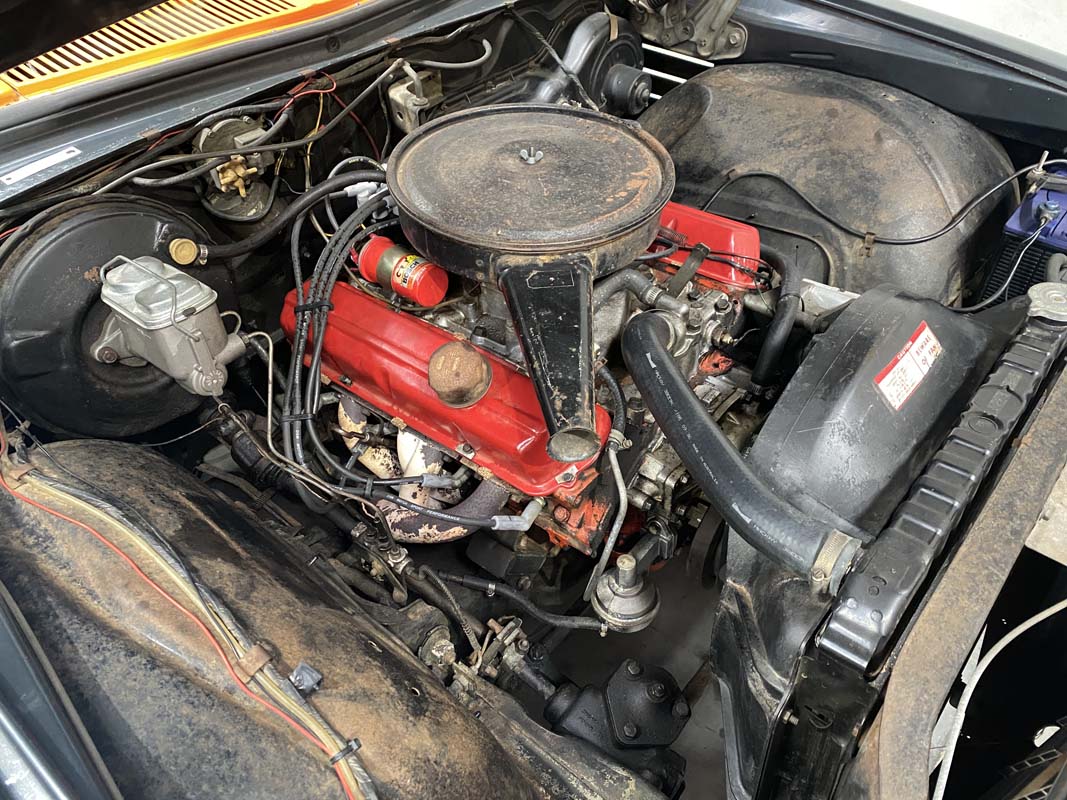 Like the exterior and interior, the 308 V8 and 4-speed manual transmission may be the originals, too.

Sold new in Adelaide, the Monaro wears a sticker for another dealer in Blair Athol, with notable additions including a tow bar and sunroof, but when either of these were fitted is unknown. 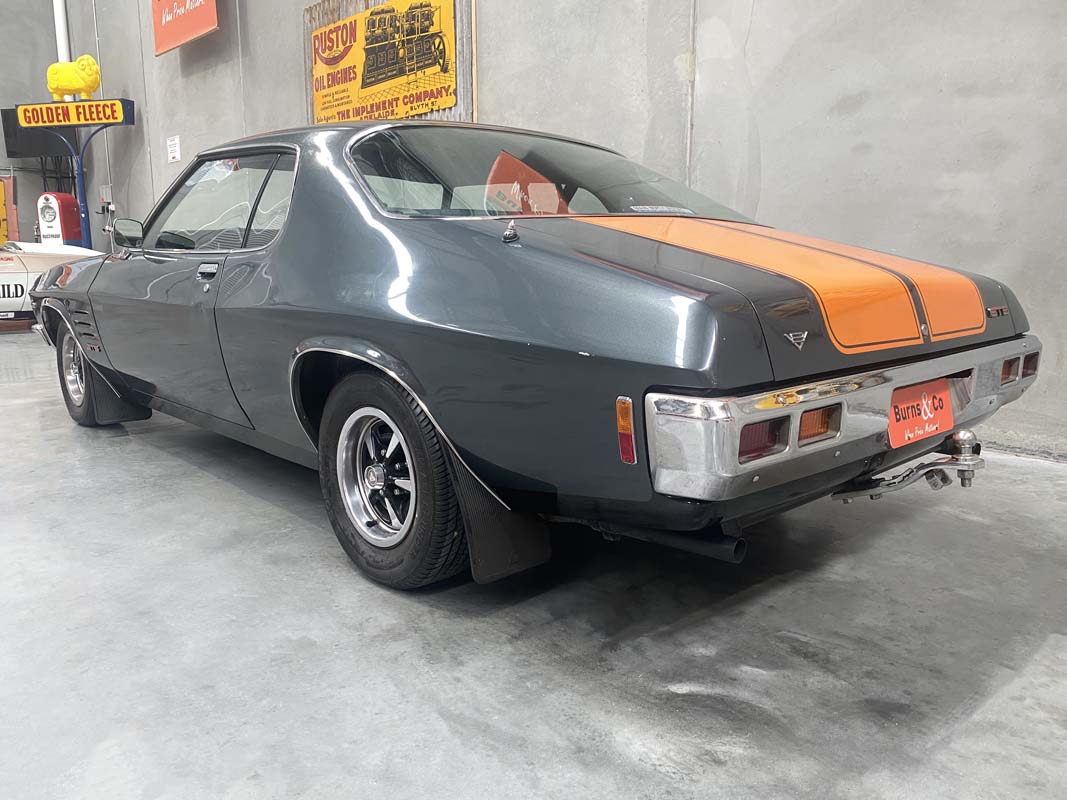 The 88,468 miles on the odometer is believed to be genuine and would support the claimed provenance, while a Letter of Authenticity from Holden shows the car is authentic to its factory paint, trim and mechanical combination.

Described as a great survivor car and rare find, bidding on this HQ Monaro GTS coupe had already exceeded $115,000 at time of writing. 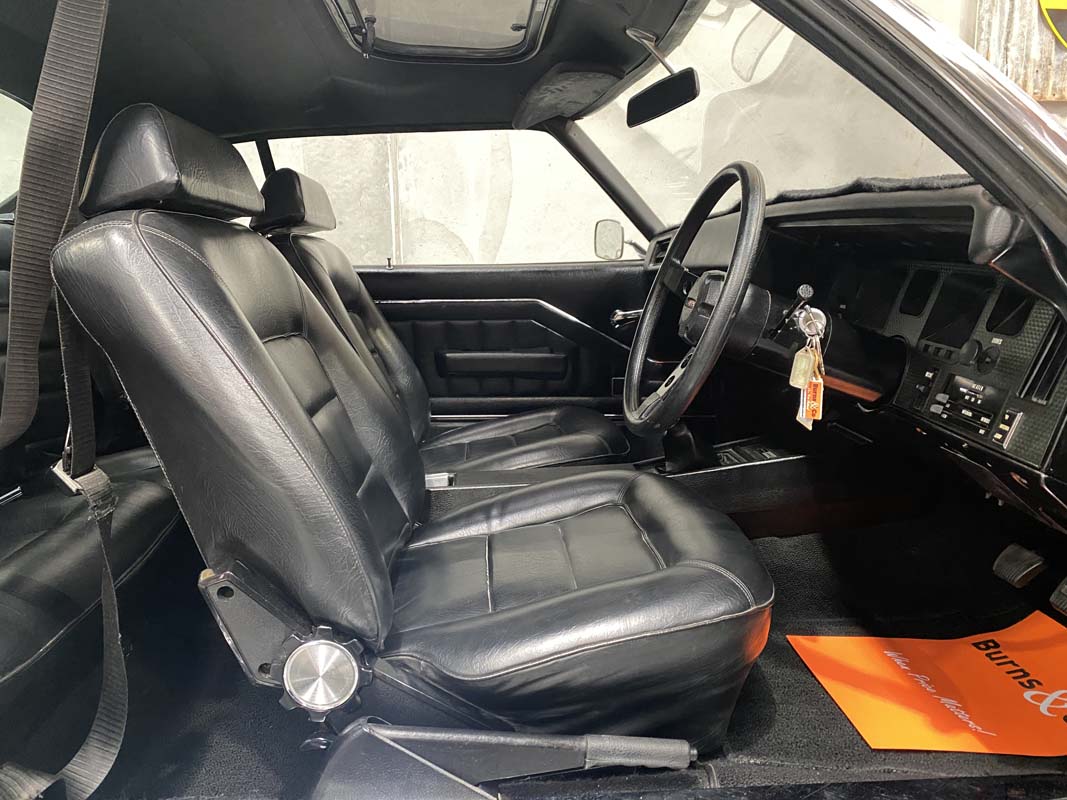 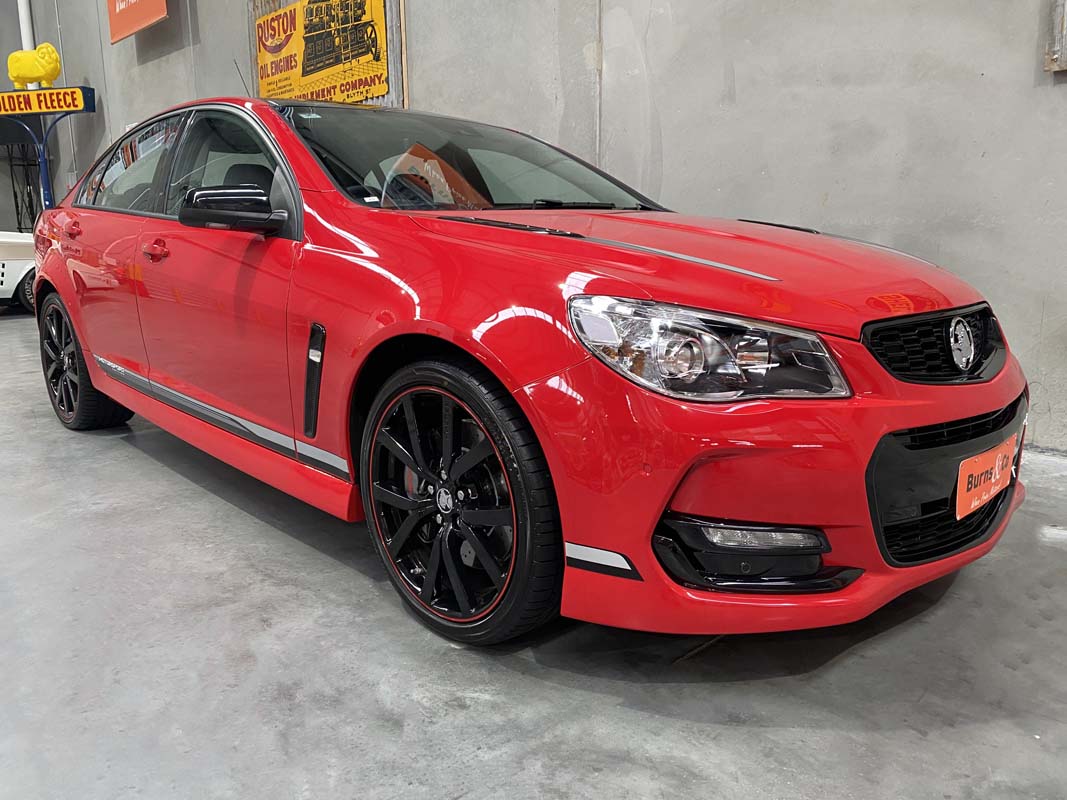 From the last gasp of the Australian-made Holden Commodore, this 2017 VFII ‘Motorsport Edition’ is described as an investment-quality car – not just for the fact it’s a one-of-1200 limited-edition, but also for the fact it’s covered a mere 351km from new. 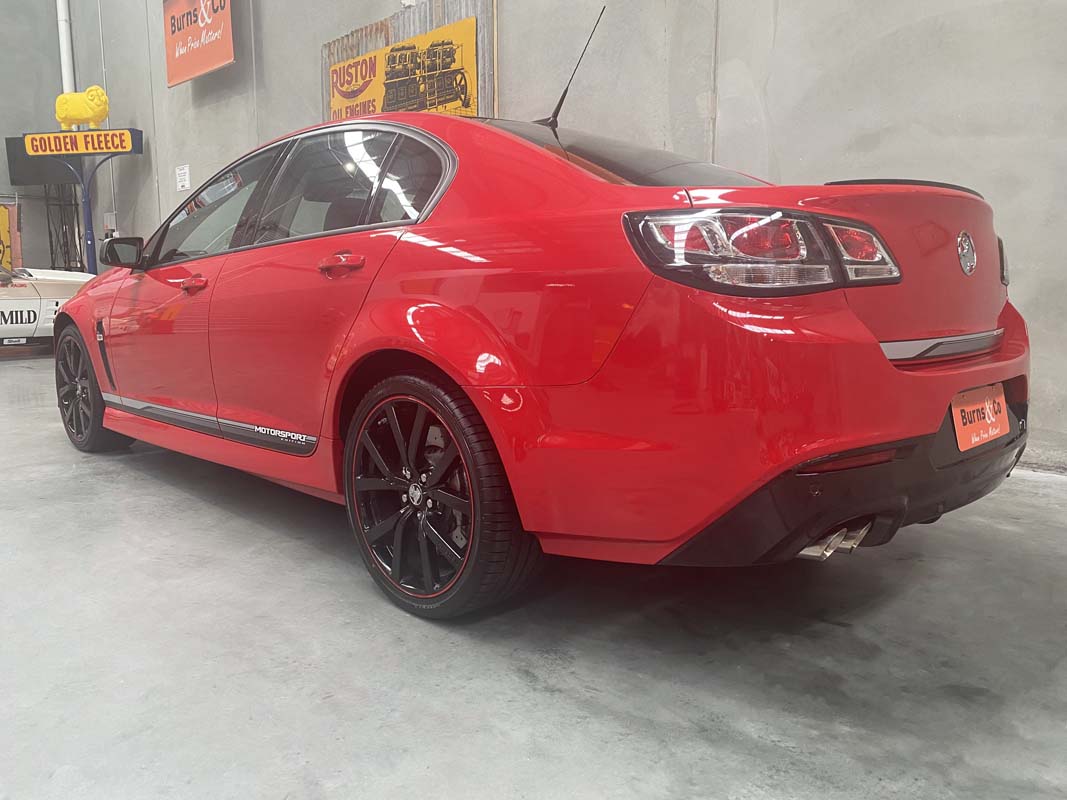 One of three limited-editions Holden released for 2017 (a ‘Director’ sedan and ‘Magnum’ ute were the others), the Motorsport Edition sedan was based on the SSV Redline and added several upgrades, including more powerful brakes, improved cooling and Magnetic Ride Control suspension as standard. 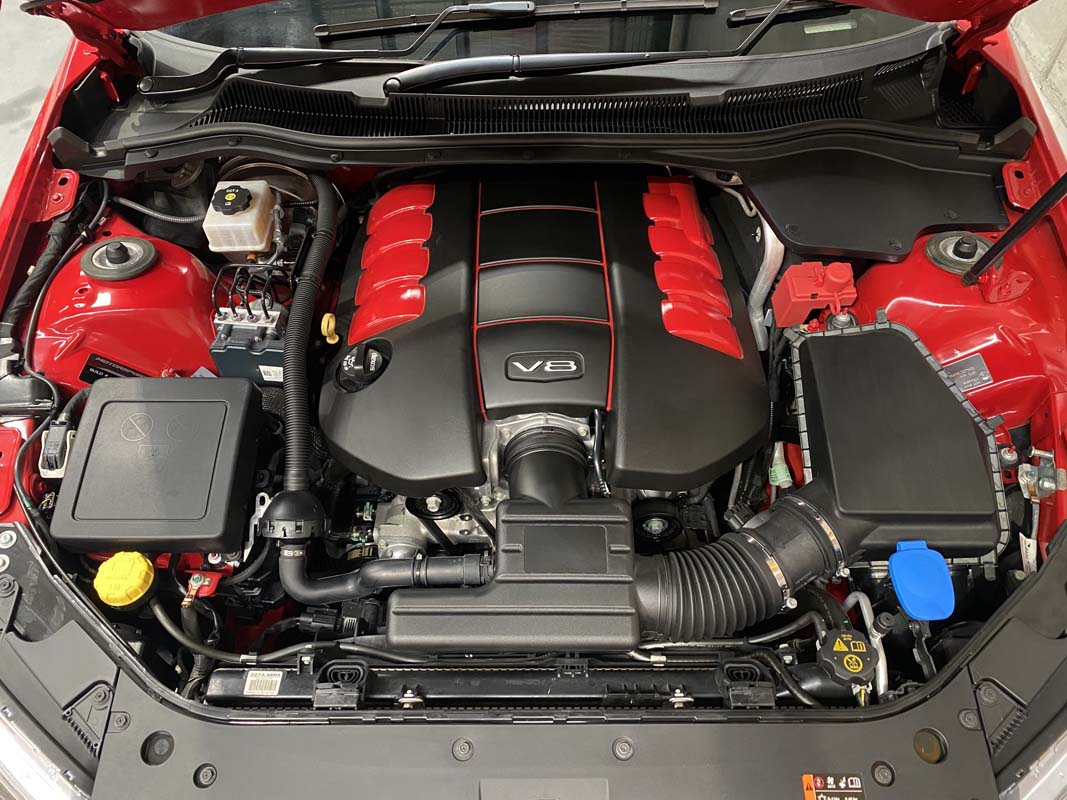 Thanks to that extra kit, the Motorsport Edition was regarded by many as the best non-HSV Commodore available when it was new, combining superb driving dynamics, a meaty 304kW/570Nm LS3 6.2-litre V8 (matched to a 6-speed manual in this instance) and excellent brakes with plenty of interior space and comfort.

Subtle striping on the lower body, bonnet and bootlid identified the Motorsport Edition outside, with further Motorsport identification inside. 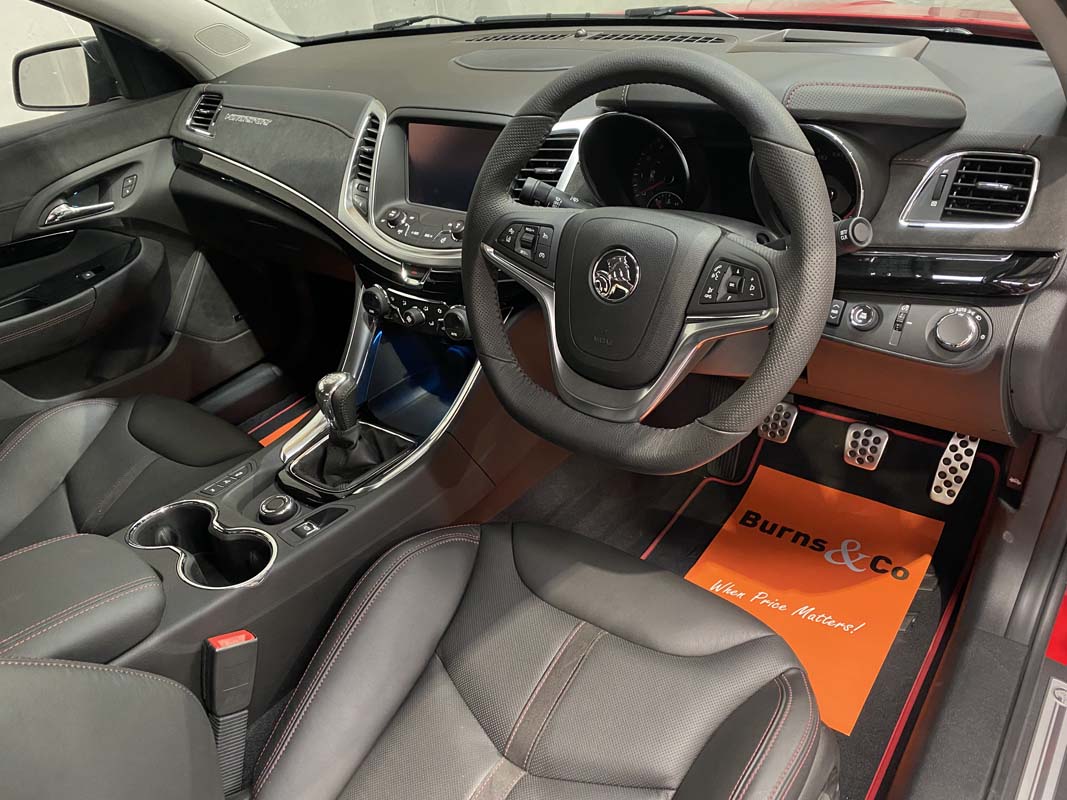 While not the rarest of the trio of 2017 special editions (the Director was limited to 260 units and the Magnum ute 240), the Motorsport Edition has arguably been more popular.

This as-new example comes with all books, owner’s pack and dealer accessories. 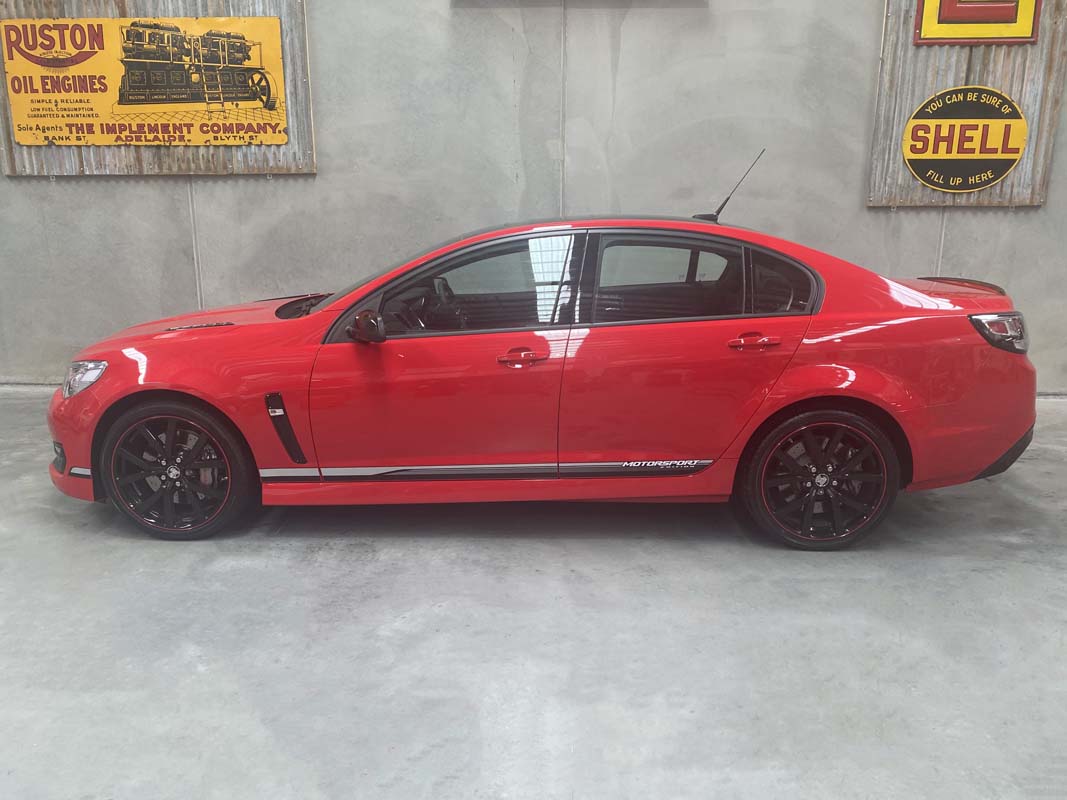 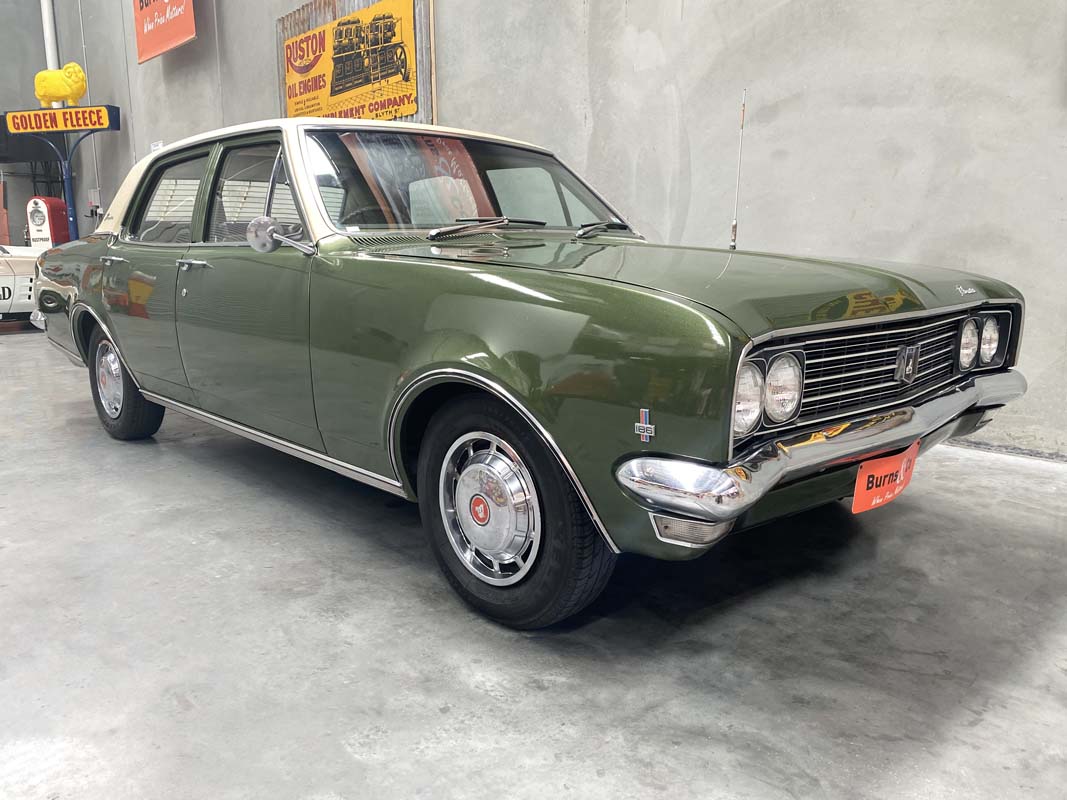 While Verdoro Green is a colour more often associated with Monaros, it was applied to Kingswoods and, more rarely, Premiers through the K-T-G period, too. In the case of this ’71 HG Premier, it really makes it stand out. 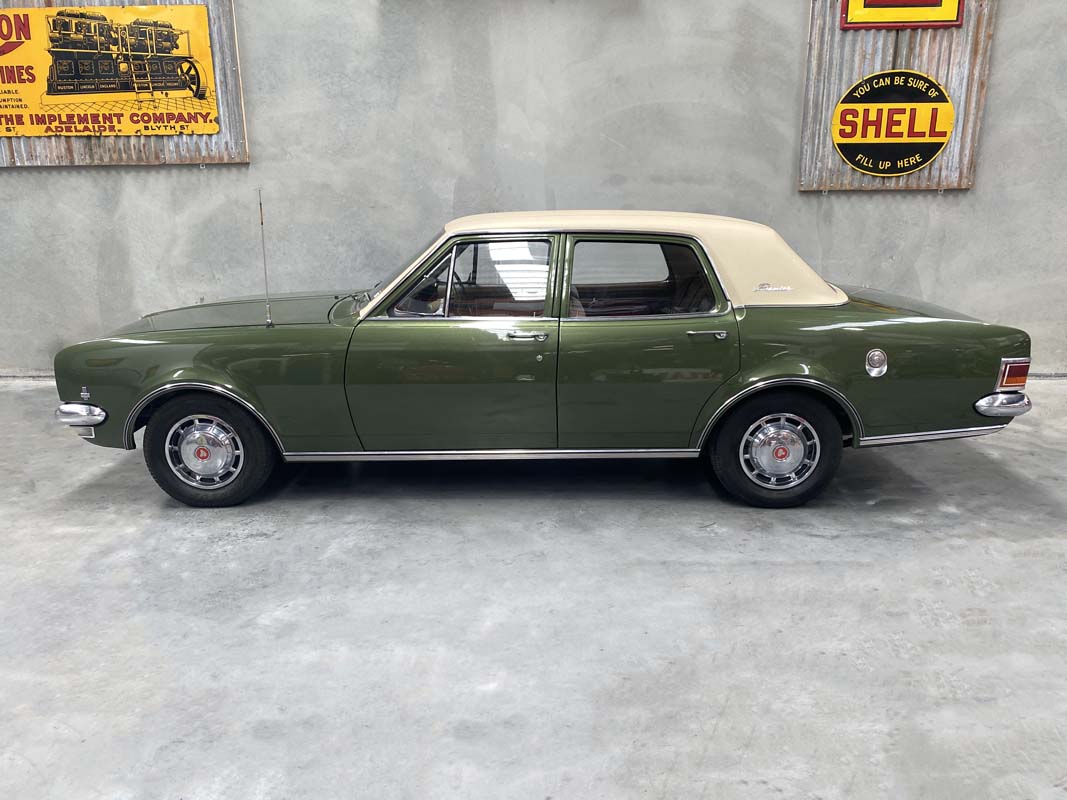 Complemented with a cream vinyl roof, the paint on this Premier reflects the quality of the rest of the car. Described as being a really clean example, it’s unclear whether this particular car has been partially or fully restored, but the 4,922 mileage suggests an older restoration. 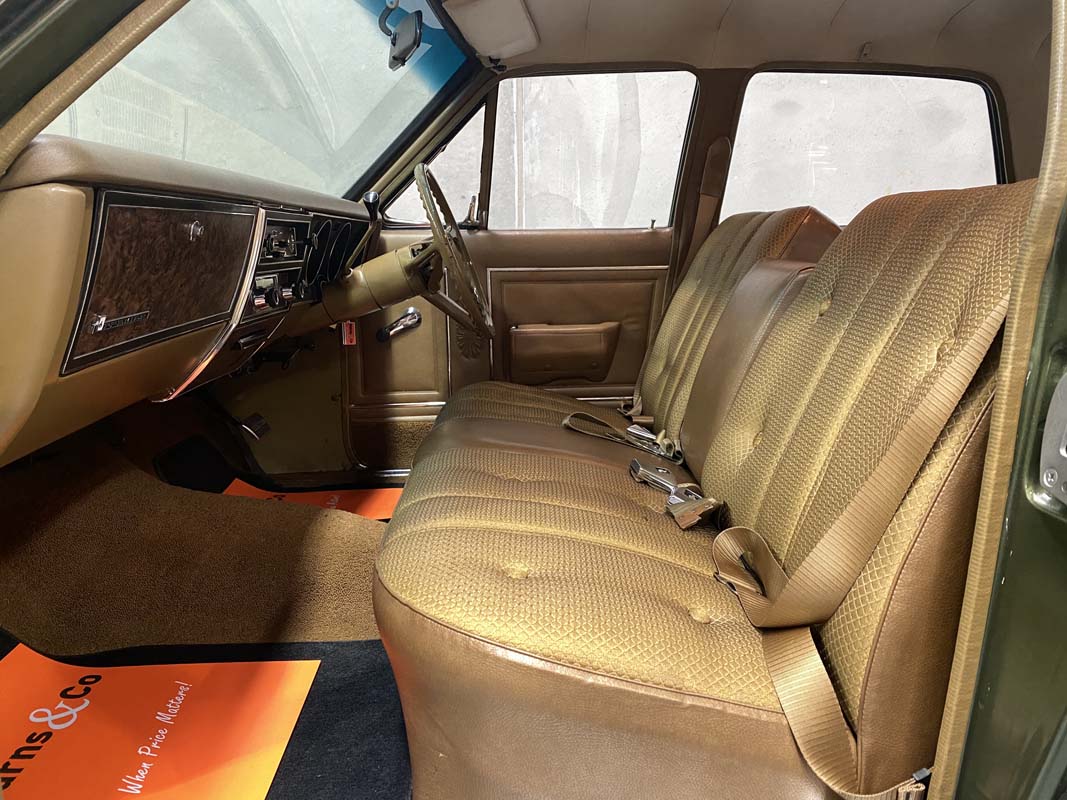 Inside, this Premier is trimmed in period-correct tan vinyl, and while the front bench is unusual, it’s not unheard of. Patterned seats and flourishes on the door trims appear more Brougham than Premier, but may be authentic, too. 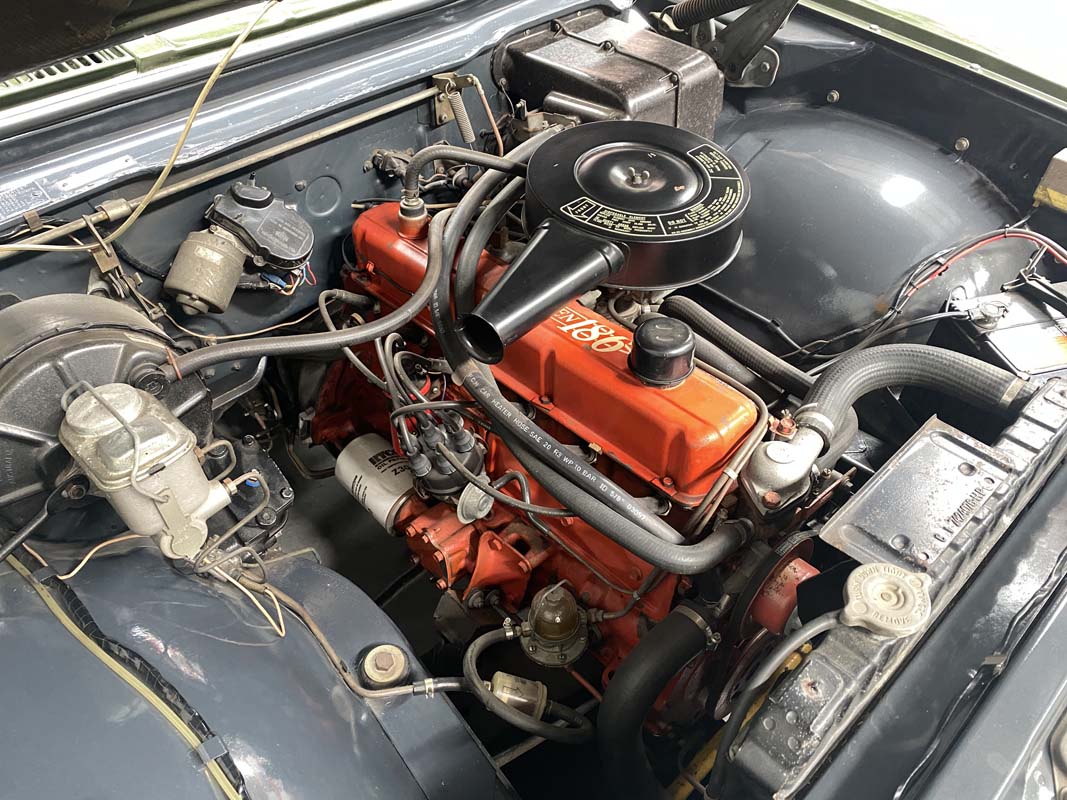 Running a 186 six-cylinder engine and Trimatic three-speed automatic, this matching numbers Premier is described as a lovingly cared for example and was on full Victorian registration ahead of the auction, with the original KXZ-542 plates available for a Victorian buyer. 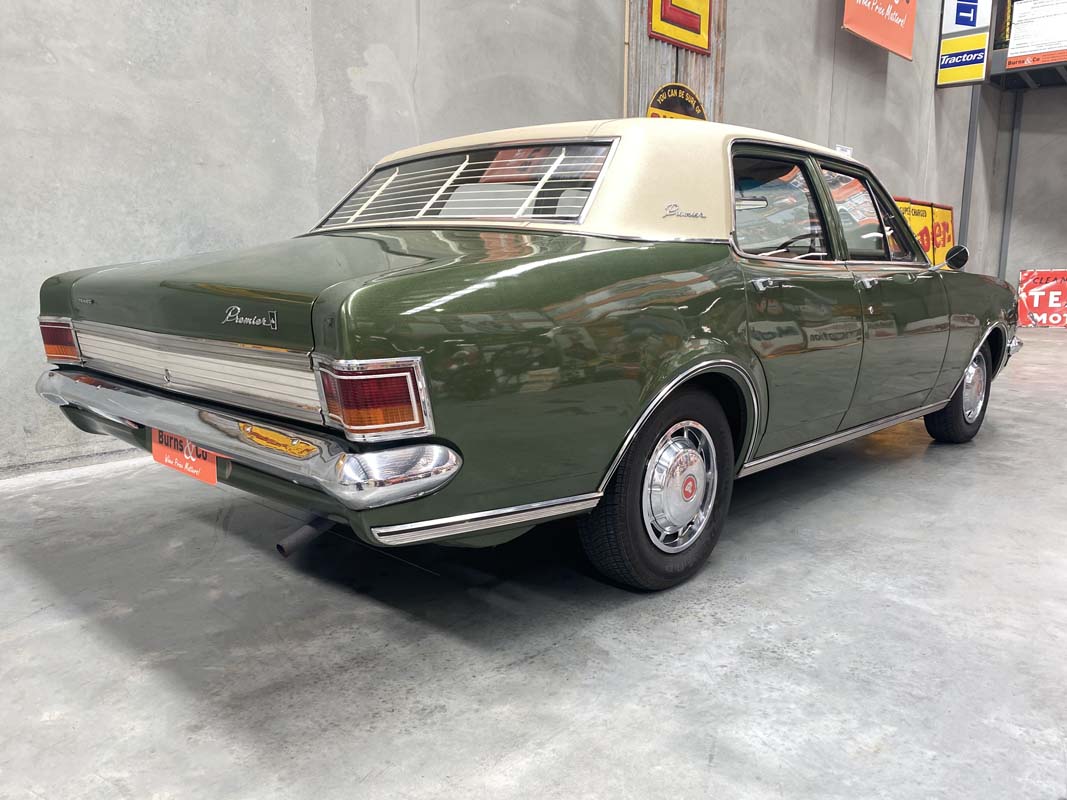 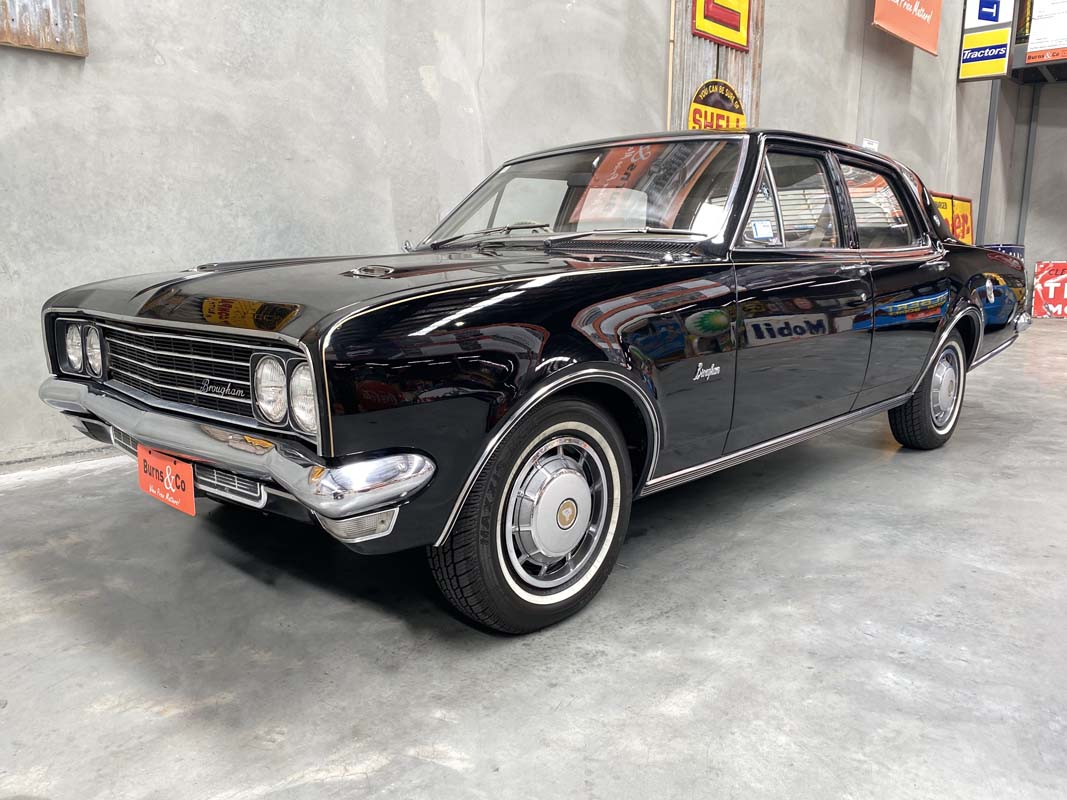 1971 HG Brougham
A step above the Premier when new, the Brougham was similar to the Premier in most dimensions except the boot, which was 8 inches longer. 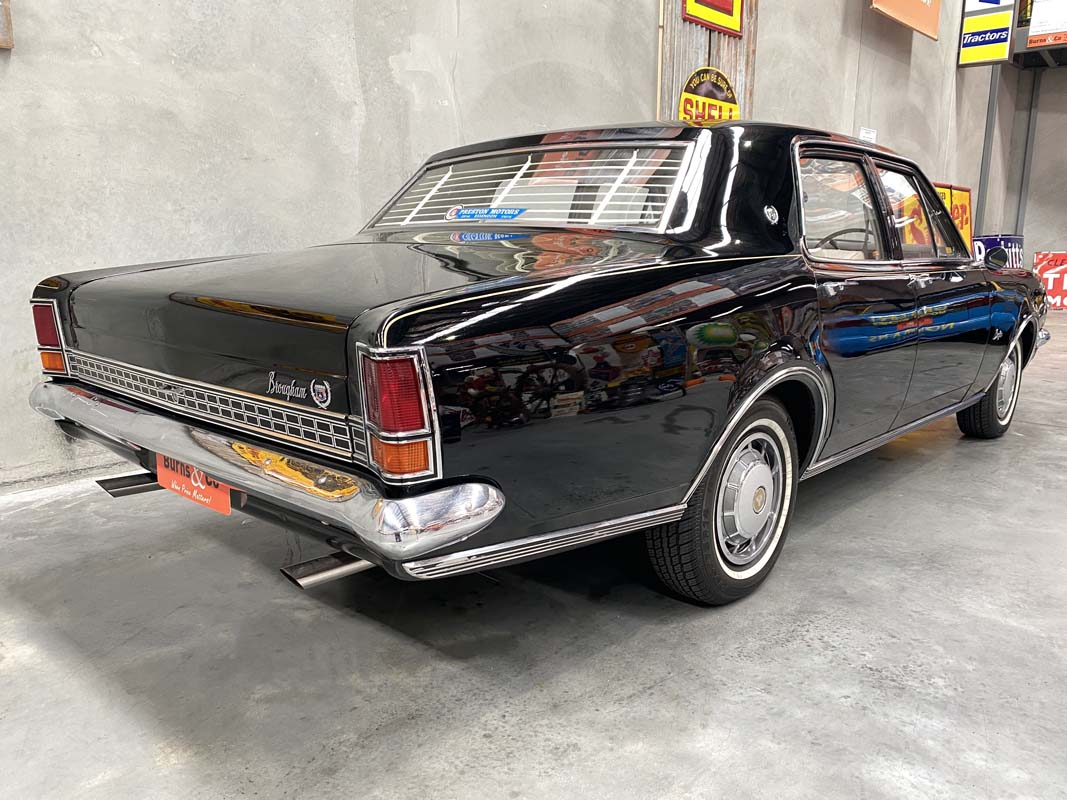 As a hasty counter to Ford’s ZA Fairlane that had been released in 1967, the Brougham offered similar levels of luxury, with automatic transmission and a V8 engine standard - three-speed Trimatic and GM-H’s 308 V8 in this case. 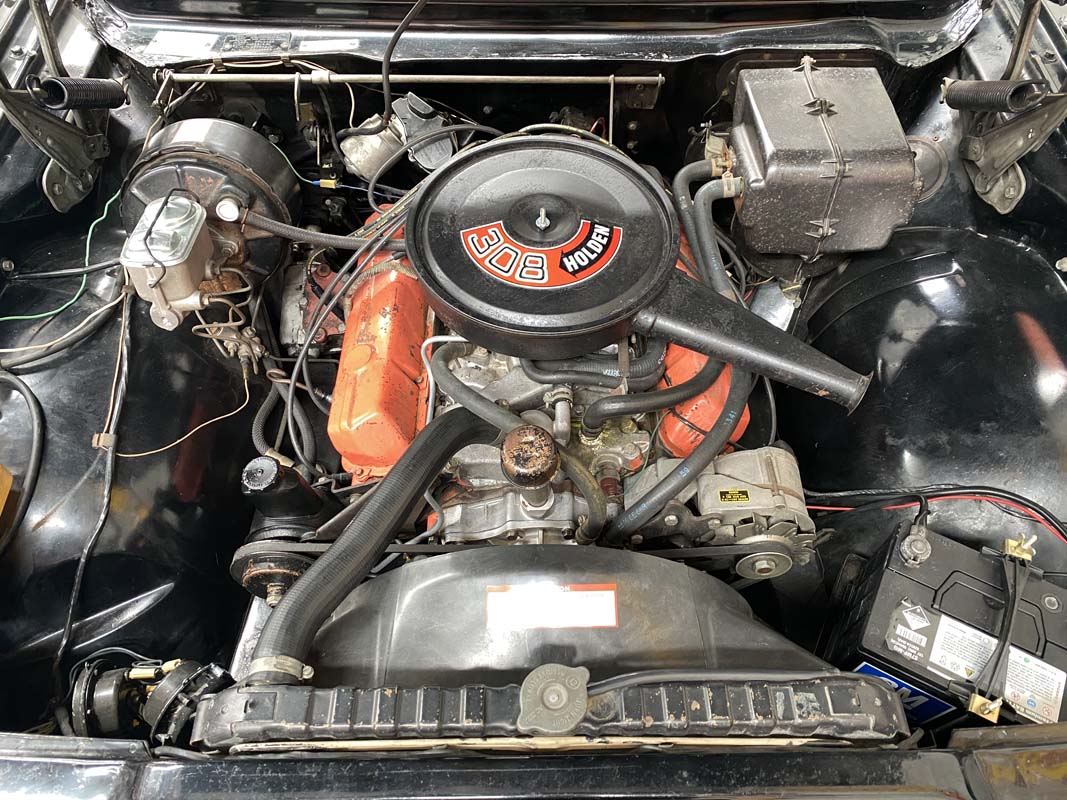 This HG Brougham is still wearing its original Warrigal Black with cream vinyl interior and is also a matching-numbers car. Warrigal Black was usually reserved for government fleets, making its application to this car unusual, but what makes it even more unusual is that it was ordered from the factory with a GTS bonnet, gold bodyside pinstriping, a bench seat and the vinyl roof deleted. 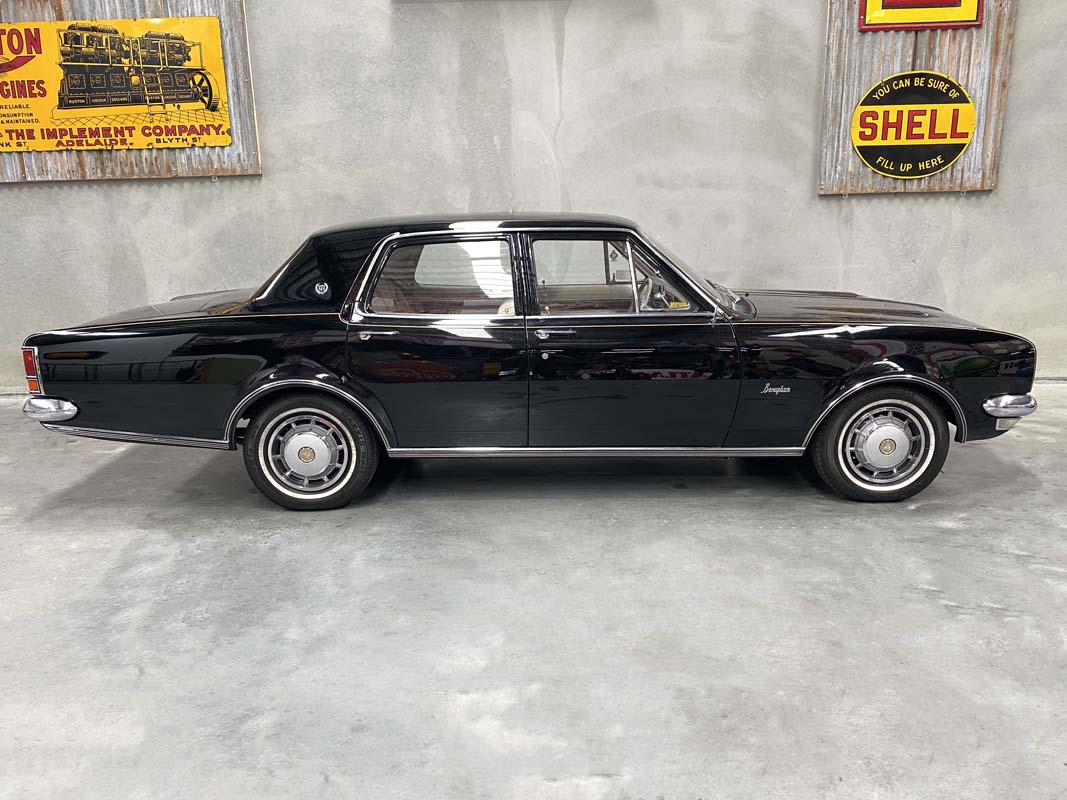 The 1/71 build date identifies this car as coming from the final few months of Brougham production before it was replaced with the Statesman on the HQ platform.

Odometer reading on this rare Brougham is 38,923 miles, which along with the paint and interior, is believed to be genuine. 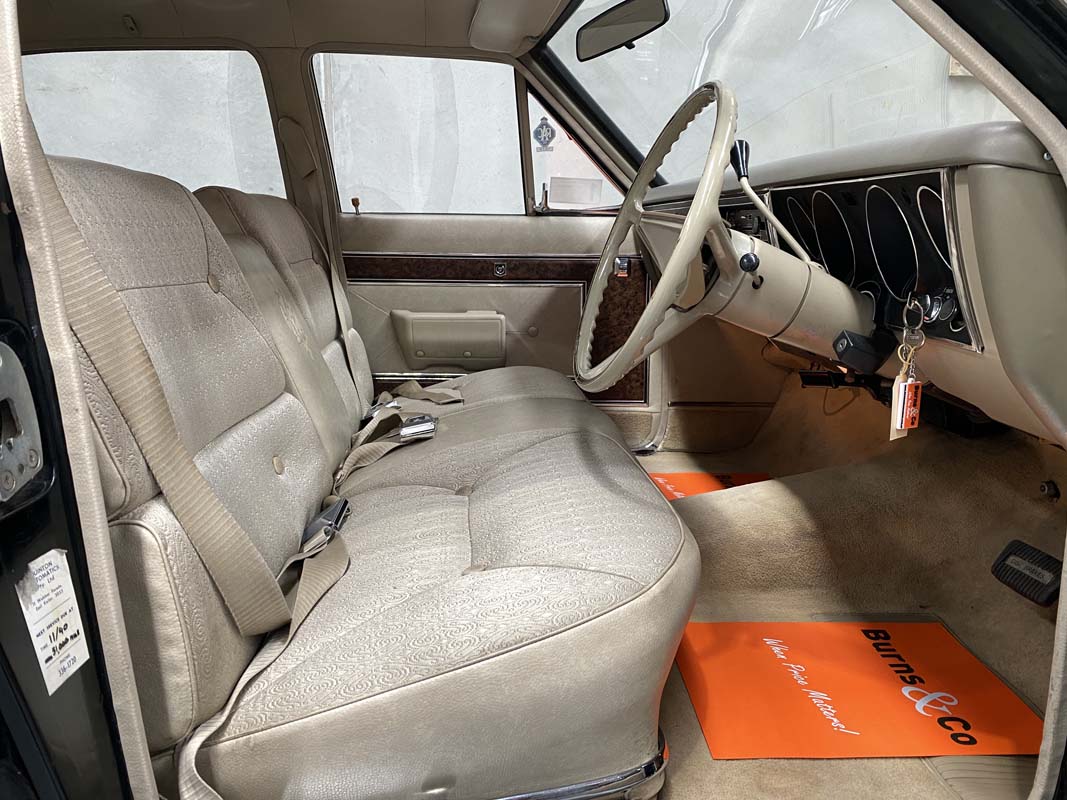 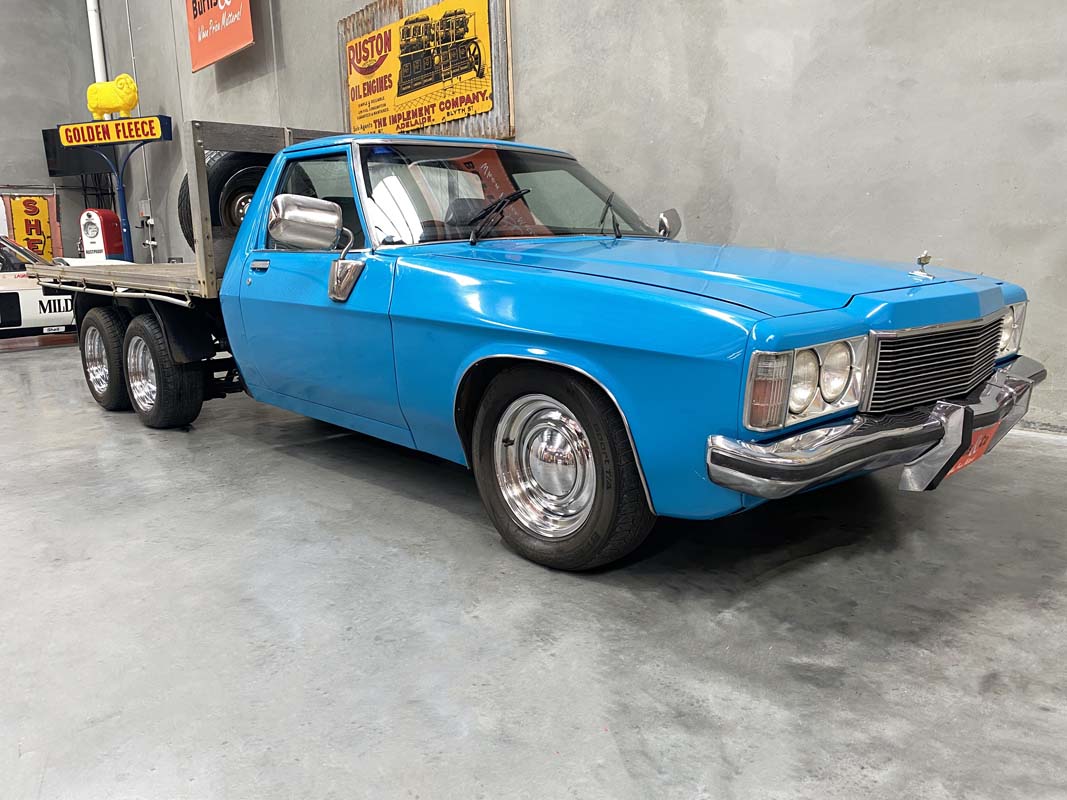 Rarely seen these days, Holden one tonners with Hayman Reese ‘Stretchpack’ dual axle conversions were once common as work vehicles for a variety of tradies. Matched to suitable suspension upgrades, these dual-axle conversions could double a one tonner’s payload capacity to two tonnes, while also offering more load area, better load distribution and improved steering and braking. 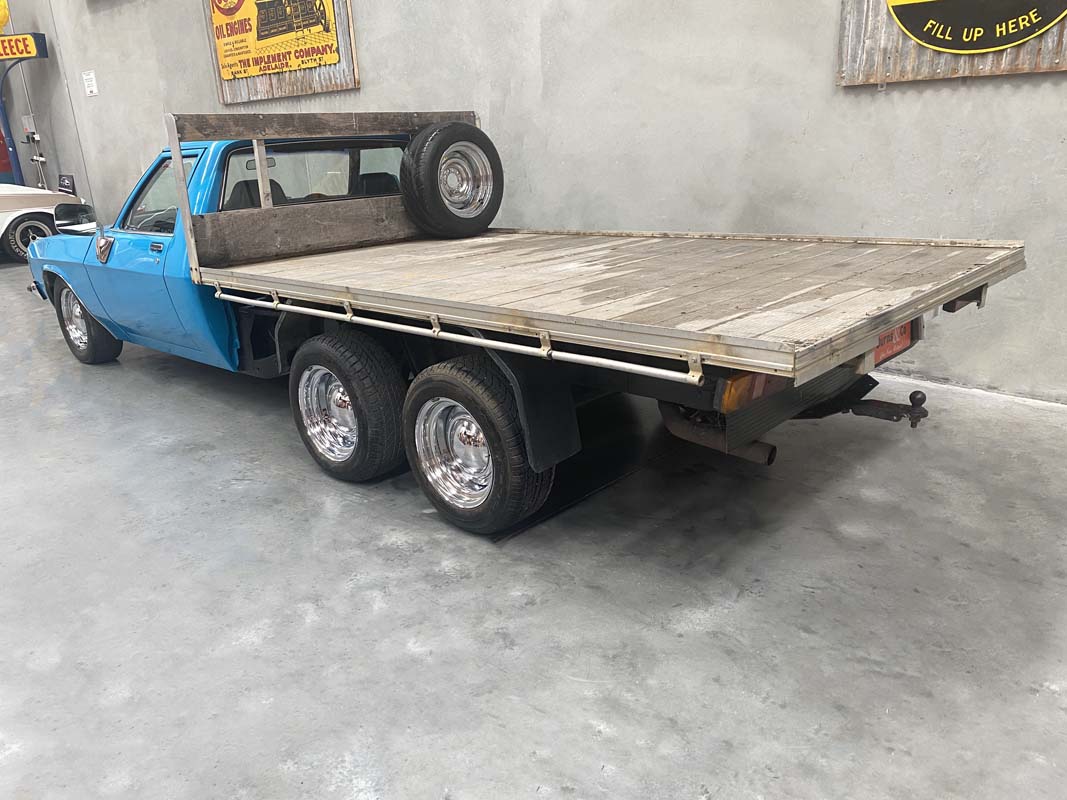 Although Hayman Reese offered these ADR-compliant conversions to suit many different types of body-on-chassis vehicle, they were most commonly seen on Holden one tonners like this one, with the base vehicle usually modified and personalised, too.

In this instance, a Statesman front clip has been added to the HX One Tonner body, with wider wheels and tyres fitted, too. That includes the non-driven third axle and even the spare mounted on the tray. 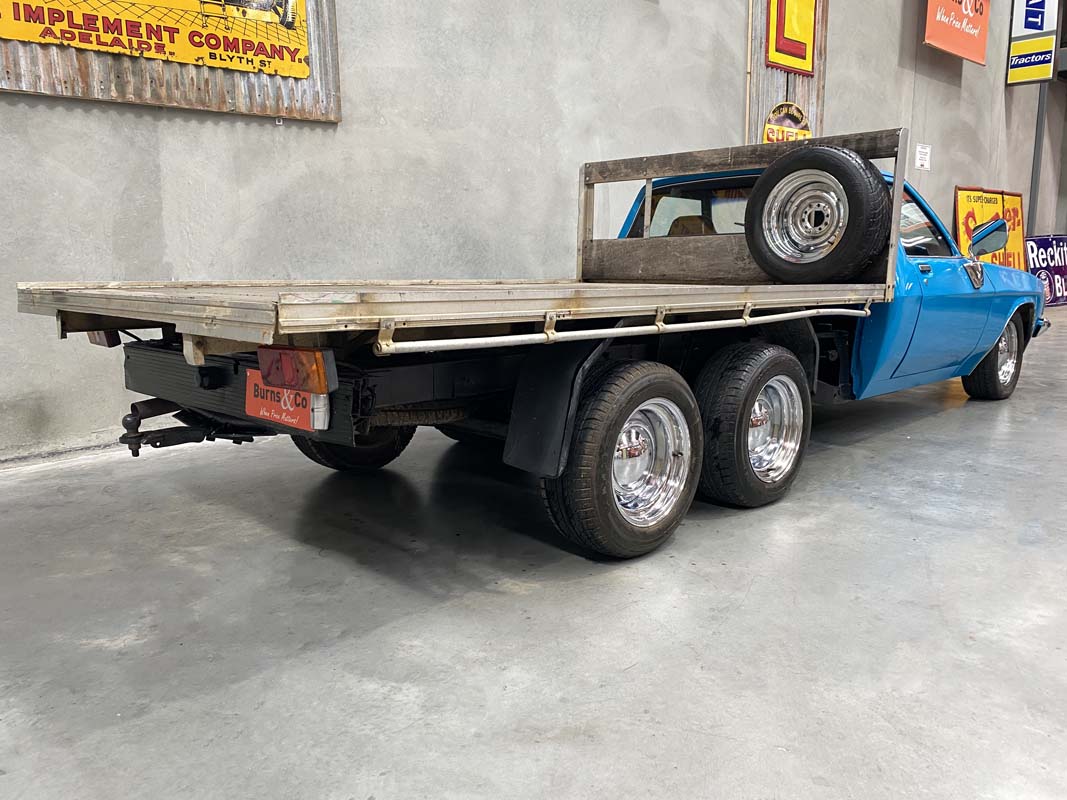 Mileage on that dash shows a significant 364,092km, which indicates this vehicle worked for many years. 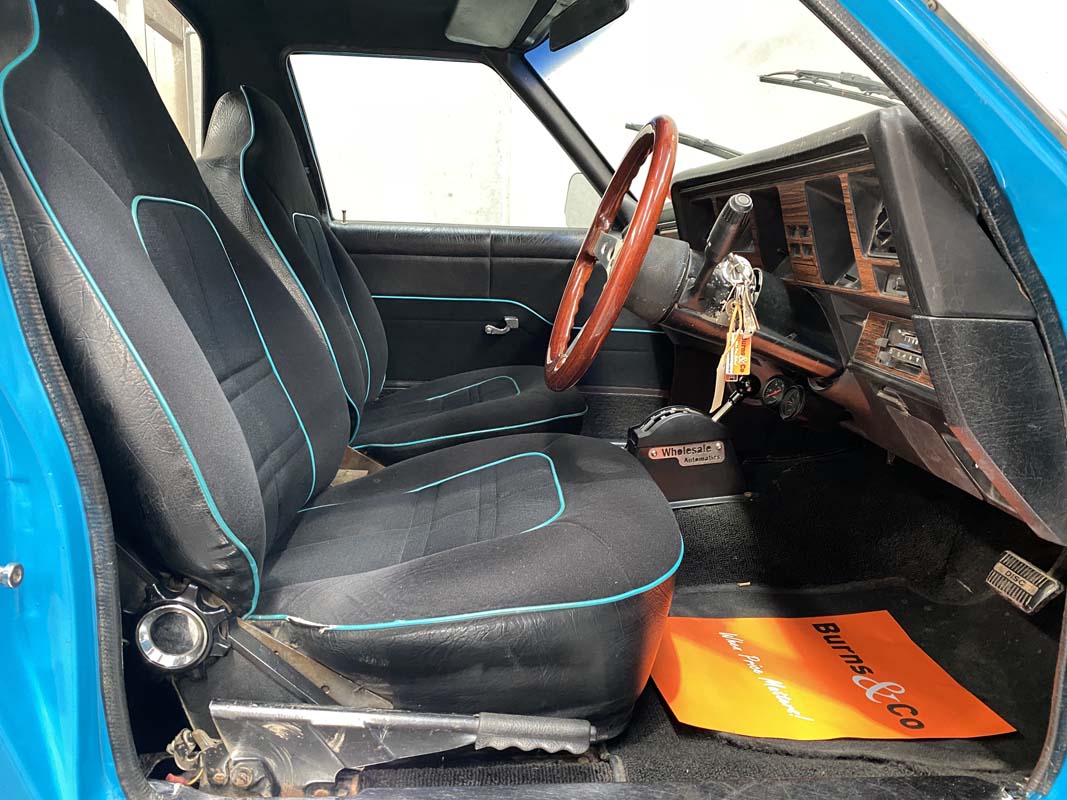 Decoding the VIN indicates it was finished in Durham Beige originally, with a black slate vinyl interior, while the drivetrain was made up of a 253 (4.2lt) V8, four-speed manual and 3.36:1 diff ratio.

As can be seen, this 2-tonner now wears a bold blue shade, with the seats and door cards partially retrimmed in neoprene-style black fabric with blue piping, but black vinyl remains in certain areas. 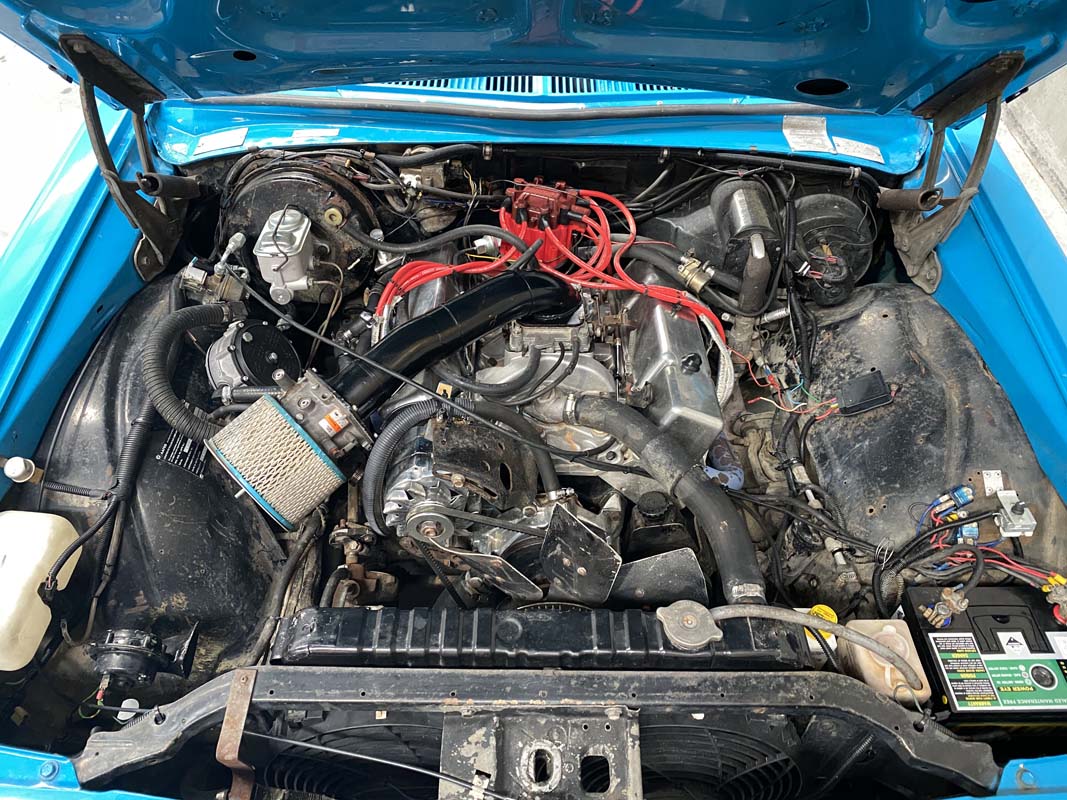 The factory drivetrain was replaced with a 350 V8, three-speed T400 automatic and 9-inch diff. The engine, customised with a mild cam, alloy heads and roller rockers, has been converted to LPG, too, with the gas system said to have been recently updated and certified.

While clearly needing some work, this former working vehicle could make for an interesting project. It comes with some documentation, including the owner’s manual, emission control handbook and a towing guide.

Burns & Co’s April Classic Car and Motorbike Auction will be held on Sunday, 10 April, with selling commencing at 12 Noon.

For more details, pre-auction inspection times, how to register for bidding and the full catalogue, click HERE