Max out on Mini madness. It’s the 60th birthday of the Mini in 2019 and the revolutionary little devil is being celebrated all over the world, including at Historic Winton this May. 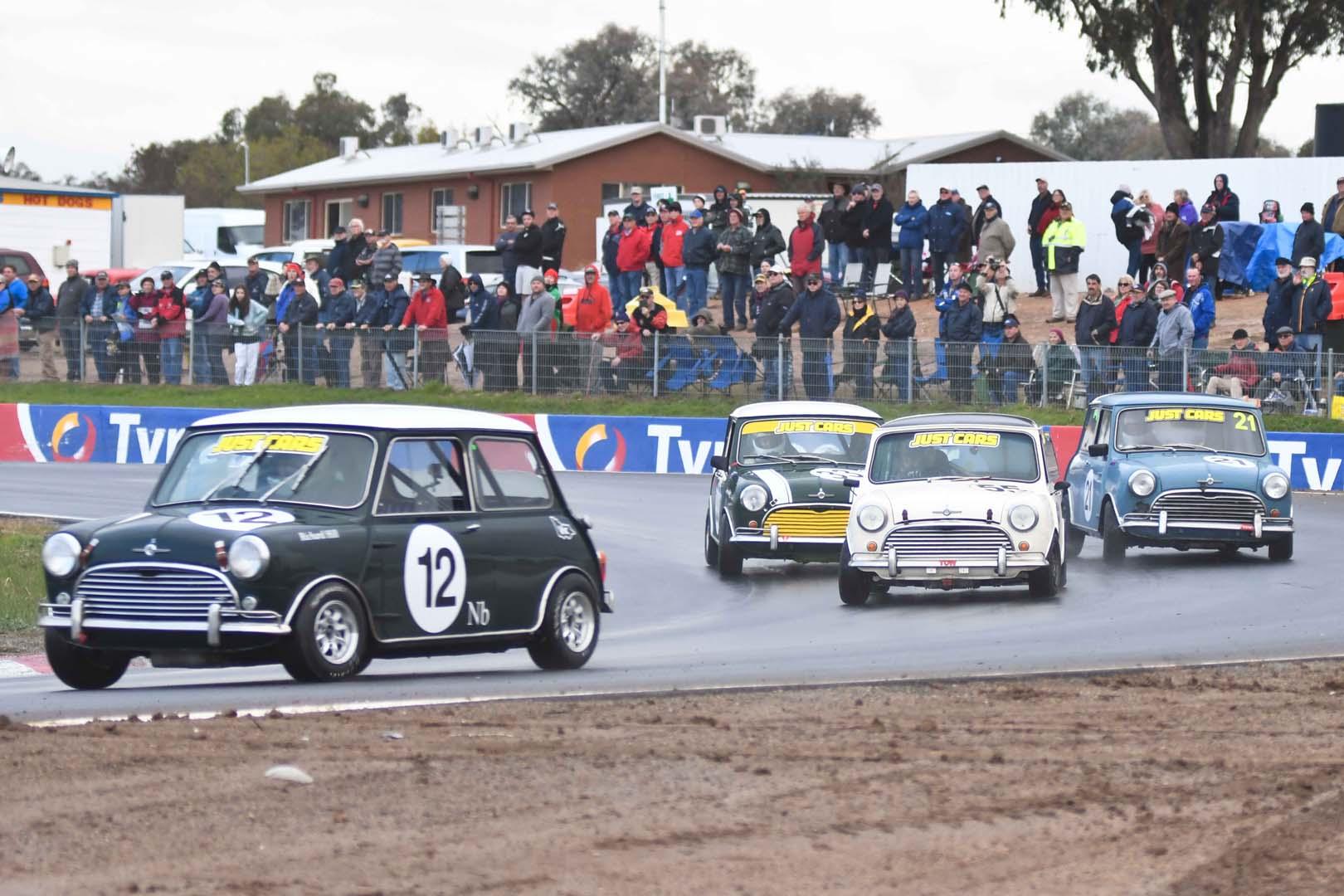 At this year’s Historic Winton - on Saturday 18 and Sunday 19 May – the Mini’s diamond anniversary will see a big paddock display of Minis, with the iconic small car included in the traditional lunchtime parade, too.

On the track, there’ll be a change to the class structure for this meet that should favour the Minis, while the regular card of historic touring car races will be augmented with a special ‘Mini Dash’ on Saturday 18 May. This Mini-only affair will see the nation’s fastest Mini drivers going door handle-to-door handle to decide who really is the Tiny Tintop Top Dog…

British amateur racers knew a good thing when they first saw Alec Issigonis’ astounding Mini-Minor roll off the production line in 1959. The BMC ‘A’ Series engine was already a staple of motorsport – ‘So, chaps, we’ll just bolt hot-up bits onto the tiny 848cc engine, clamp battle bowlers on our heads and away we go!’

The Mini’s light weight and amazing, on-rails understeer handling put them into race-winning contention, right from the outset.

Soon after the Mini was released, John Cooper, the man whose racing cars had been winning since the late 1940s (and was fresh from two F1 World Championships in 1959-60 with Jack Brabham), persuaded good friend Alec to let him have a crack at it. Enter the Austin and Morris Mini Coopers in 1961.

More British championships followed, along with a string of Monte Carlo Rally wins from 1964-67 (with the ’66 win infamously disallowed because of a “headlight infringement”). The Issigonis Mini went on to become, arguably, the ‘winningest’ car in motor racing history.

Here in Australia, Minis won their fair share, too, most famously at the 1966 Mount Panorama enduro, where the Cooper S not only won but filled the first nine places in the finishing order. 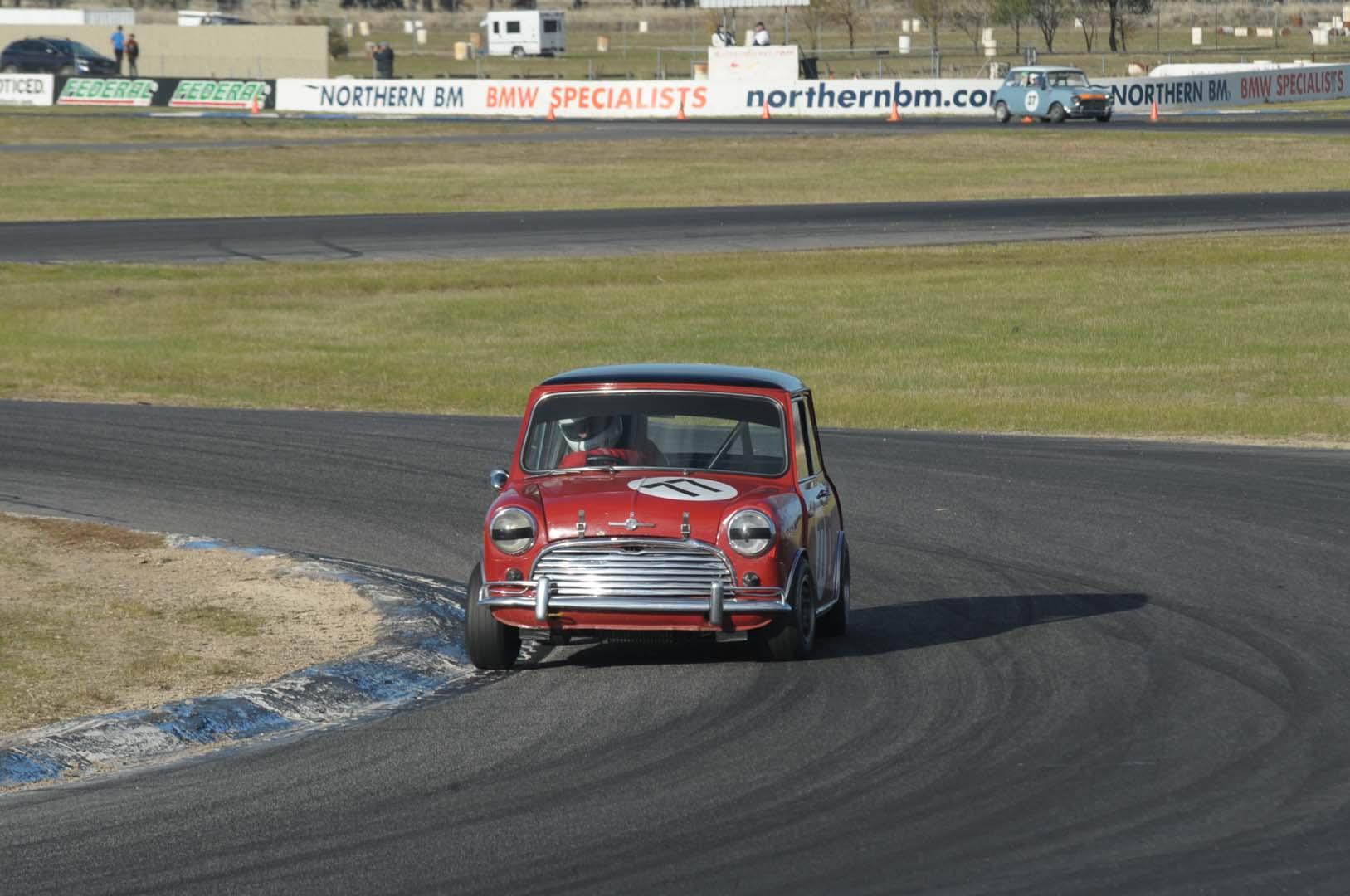 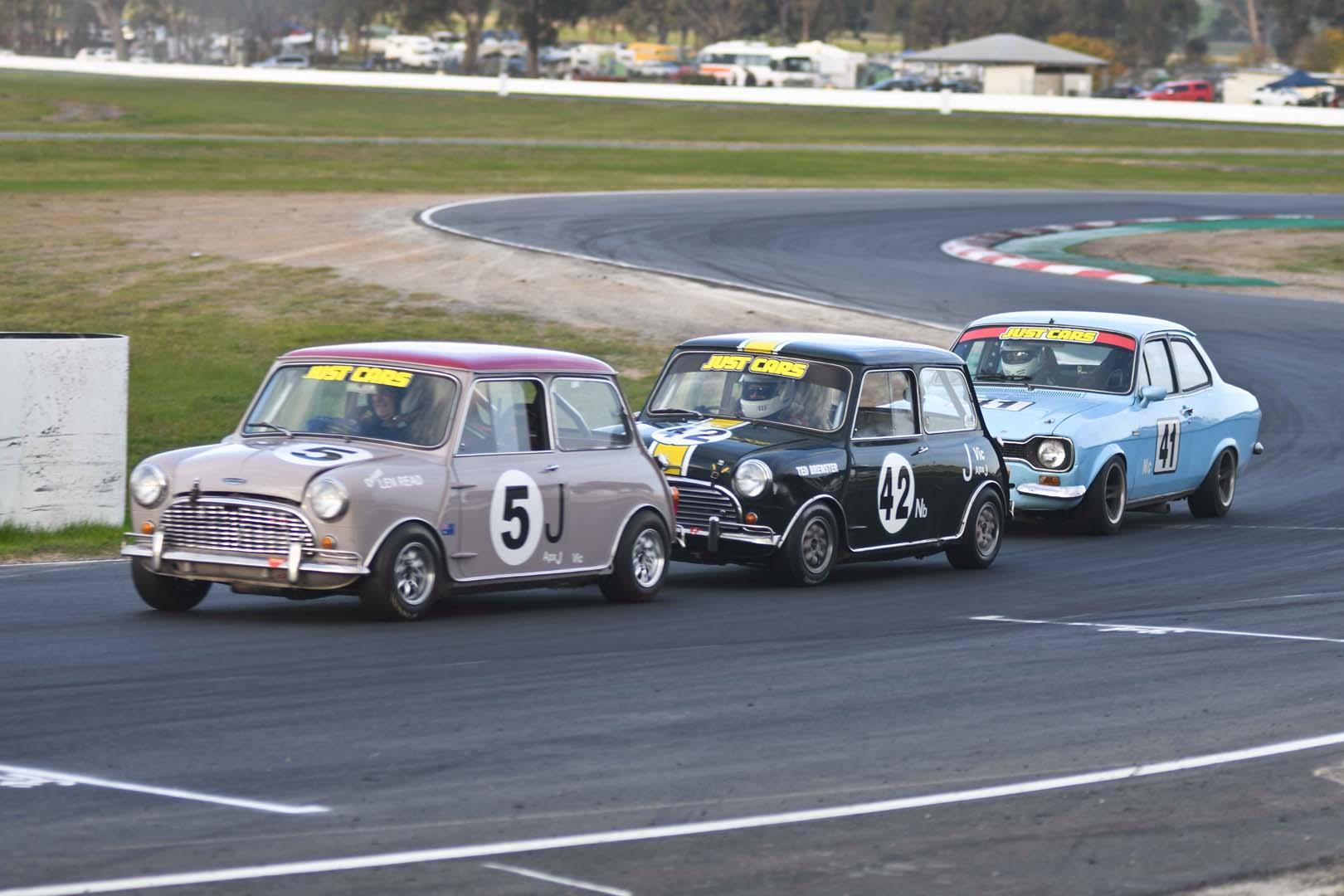 Today, Minis are no less quick (probably quicker in the right hands!) and continue to win Historic Touring Car races, especially when the track is tight and/or flowing. Winton’s short track suits the little cars to a T and has been a favourite hunting ground for them over the years.

In the recent past, Historic Winton has put on David vs Goliath battles between Minis and the mighty Mustangs and Camaros. But this year, the Minis will be even more dominant as the HTC contingent will come from pre-1965 and invited pre-’72 cars only, making Historic Winton something very special to watch.

Amongst the Mini contingent, interstate rivalry is fierce between Victoria, SA and Tasmania, with a quick WA punter, Syd Jenkins, coming over for the fun, too. In the tradition of ’60s UK champion Mini racer Christabel Carlisle, Victoria’s Linda Devlin is a truly rapid lady that’s guaranteed to be at the pointy end.

For the world’s fastest octogenarian Mini racer, Ted Brewster, the Mini Dash will mark a lifetime of racing the little cars. At 83, Ted is still a force to be reckoned with and not averse to getting the ancient elbows out as he fights off the sort of young Mini charger he was back in the 1960s.

When Ted came back to revived Appendix J historic racing in the ’80s - in the car he still drives today - a younger racer, Len Read, was amongst his closest competitors.

Back then, Len had two young sons, Danny and Adrian, helping out in the pits, so yes, it was inevitable that they would go Mini racing, too. But this year’s Winton will mark the first time in 20 years that the three Reads will race as a family - and all in Minis.

This story gets even neater: Danny will be driving a Mini Len sold years ago and has since repurchased. It’s a veteran of more than 100 race meetings and “was always a fast car”, according to the Read clan.

At a recent Winton test, Len offered to lead Danny around the track to jog his memory, as he hadn’t raced for 20 years – Danny passed him on the first lap and disappeared into the distance…

‘Overseas’ racers can’t be discounted, either. Last year’s Makulu Driver of the Meeting at Historic Winton was 18-year-old Taswegian Jeremy Bennett, who makes a return in the car passed to him by the widow of Kit Ellis; the Apple Isle’s legendary Mini ace. Fast man Rodney Creed will also cross Bass Strait to take up the battle.

But perhaps the favourite amongst this contingent will be Adelaide’s Jason Armstrong, who set pole at last year’s event with a 1:07.5 lap, ahead of Mustangs and Camaros by a full second! He returns with fellow fast Crow Eater Ian Pringle to keep up SA’s excellent track record at Winton.

Saturday’s 5-lap Mini Dash adds to the familiar card for Historic Winton of qualifying (quaintly called ‘Practice’ to affirm the historic nature of the event), the first race on Saturday and two more on Sunday. 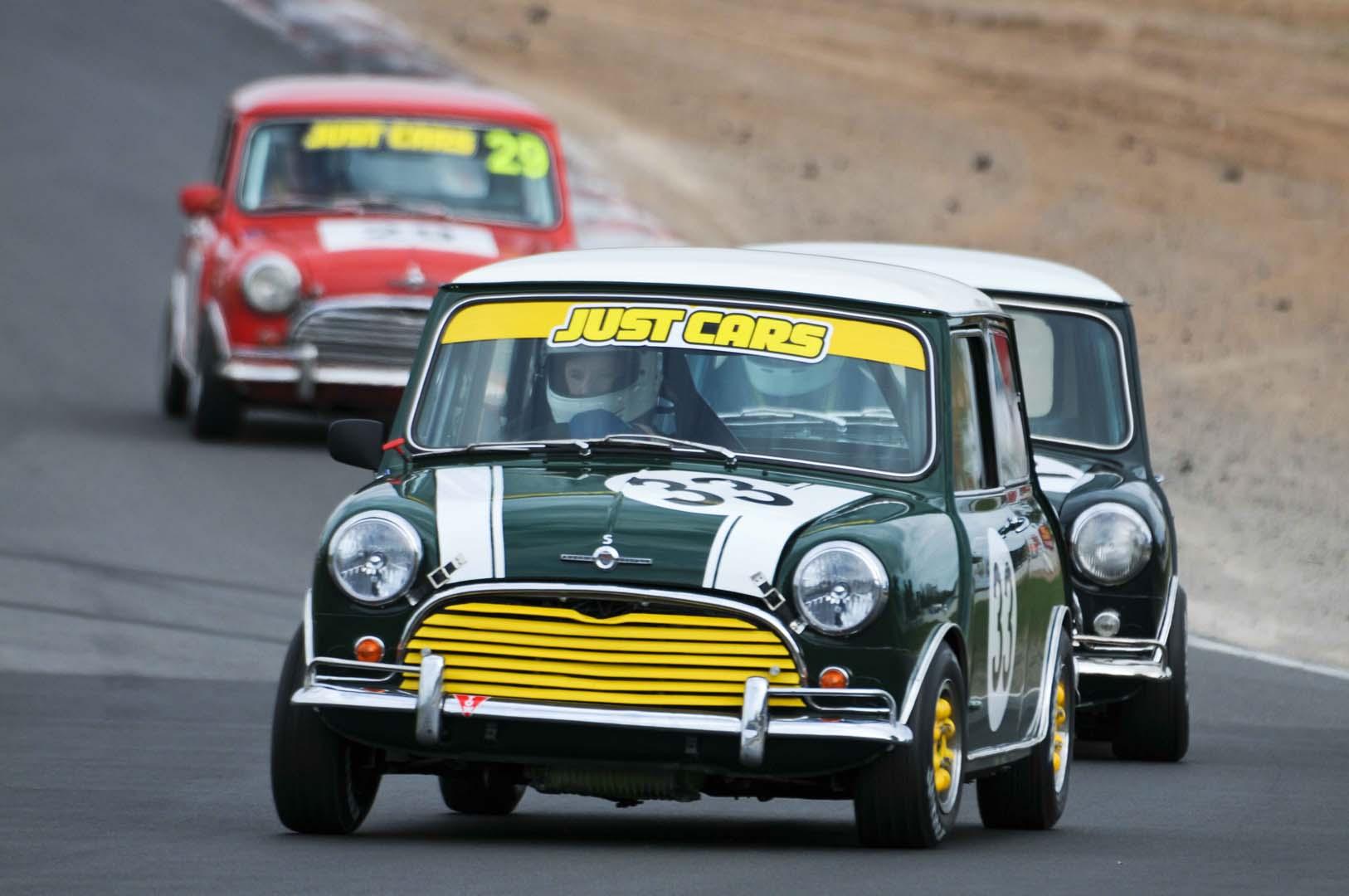 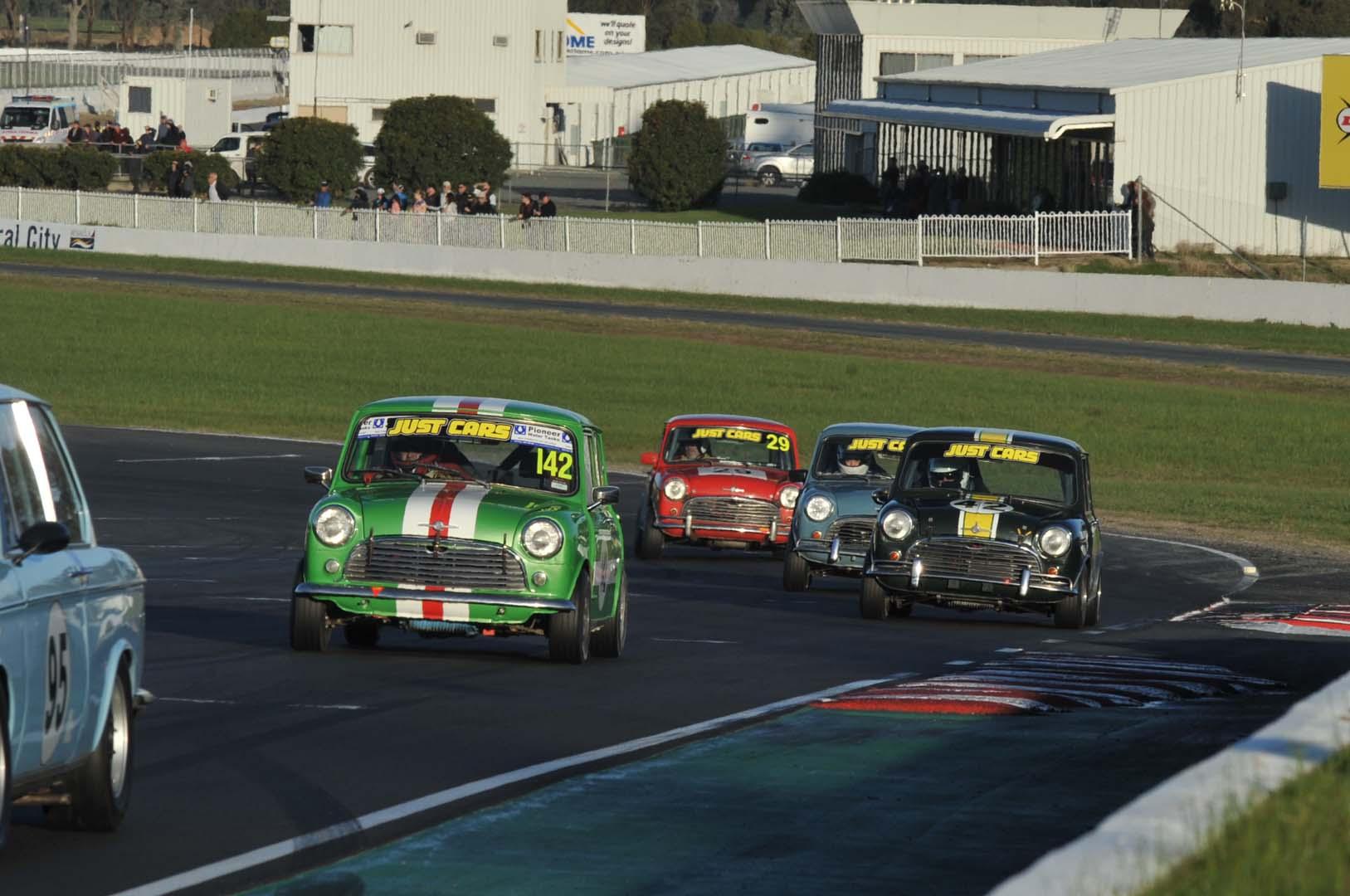 Outside of their own race at Historic Winton, the Minis will have to contend with a variety of makes in the other HTC stanzas on the programme. The Lotus Cortina, a traditional rival, will have the spectacular Peter van Summeren and Ted Perkins fighting for Dagenham, with Mick Stupka backing them up in a pushrod version.

Ben Dahlstrom will be taking his S Series Valiant on its maiden outing at the meeting, with Vince Parisi’s Simca Vedette – not the quickest car in the field, but a crowd favourite – waving the French tricolour…

The pre-’65 makeup of the HTC field for Historic Winton is an experiment on behalf of the organisers that will certainly give a different look to the field but won’t make the action any less exciting. Whatever cars run at this meeting, it’s guaranteed to be an unmissable event! 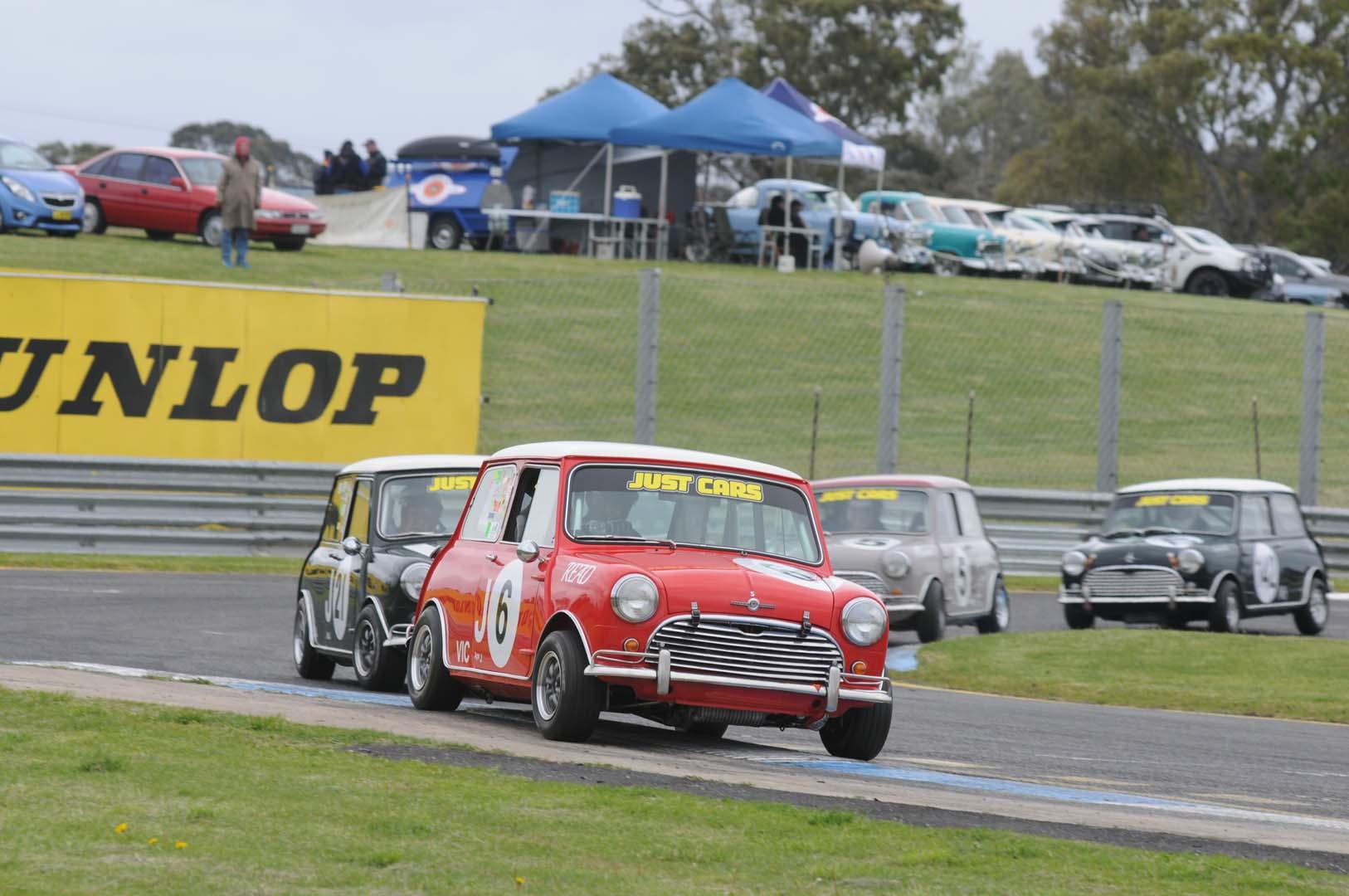 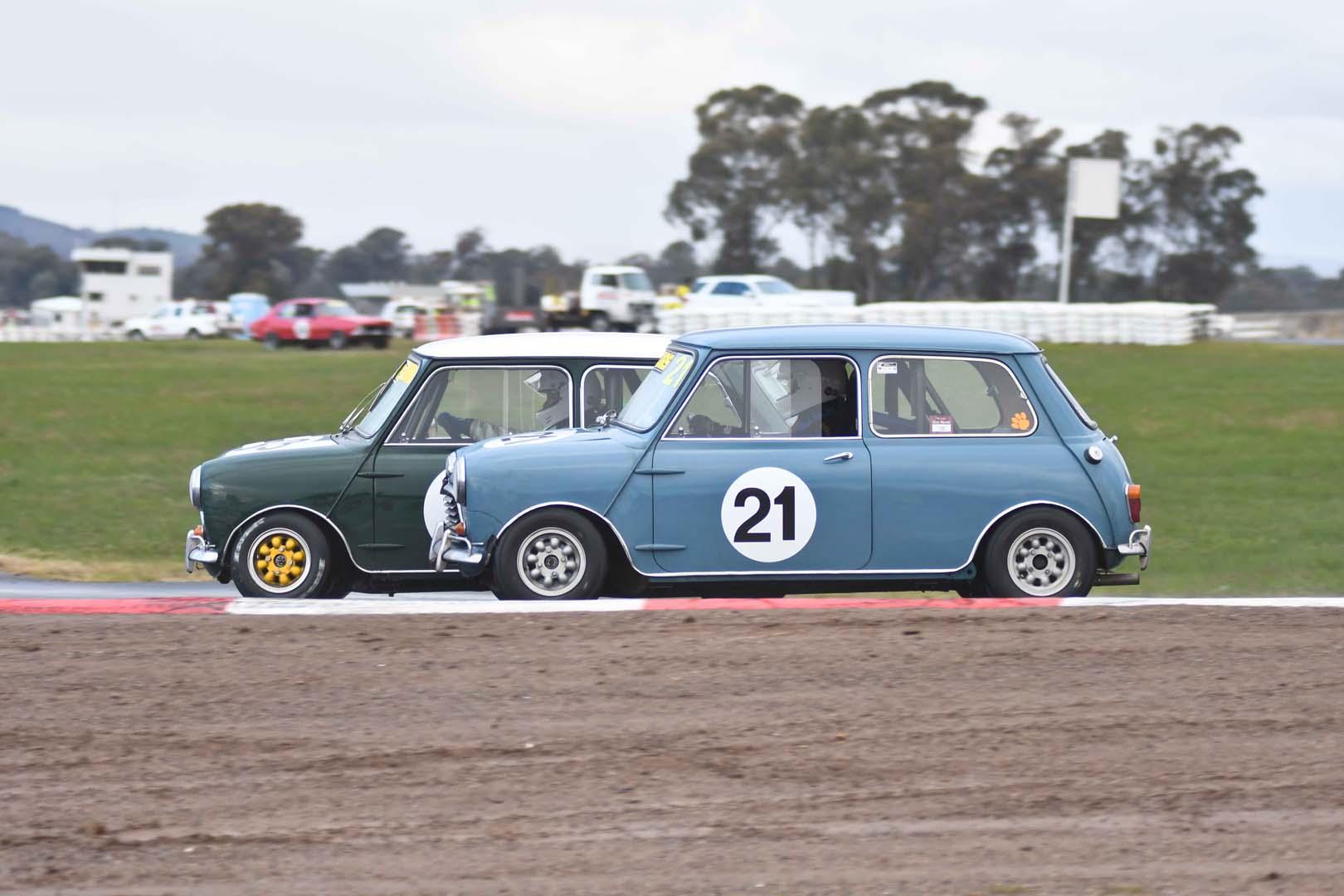 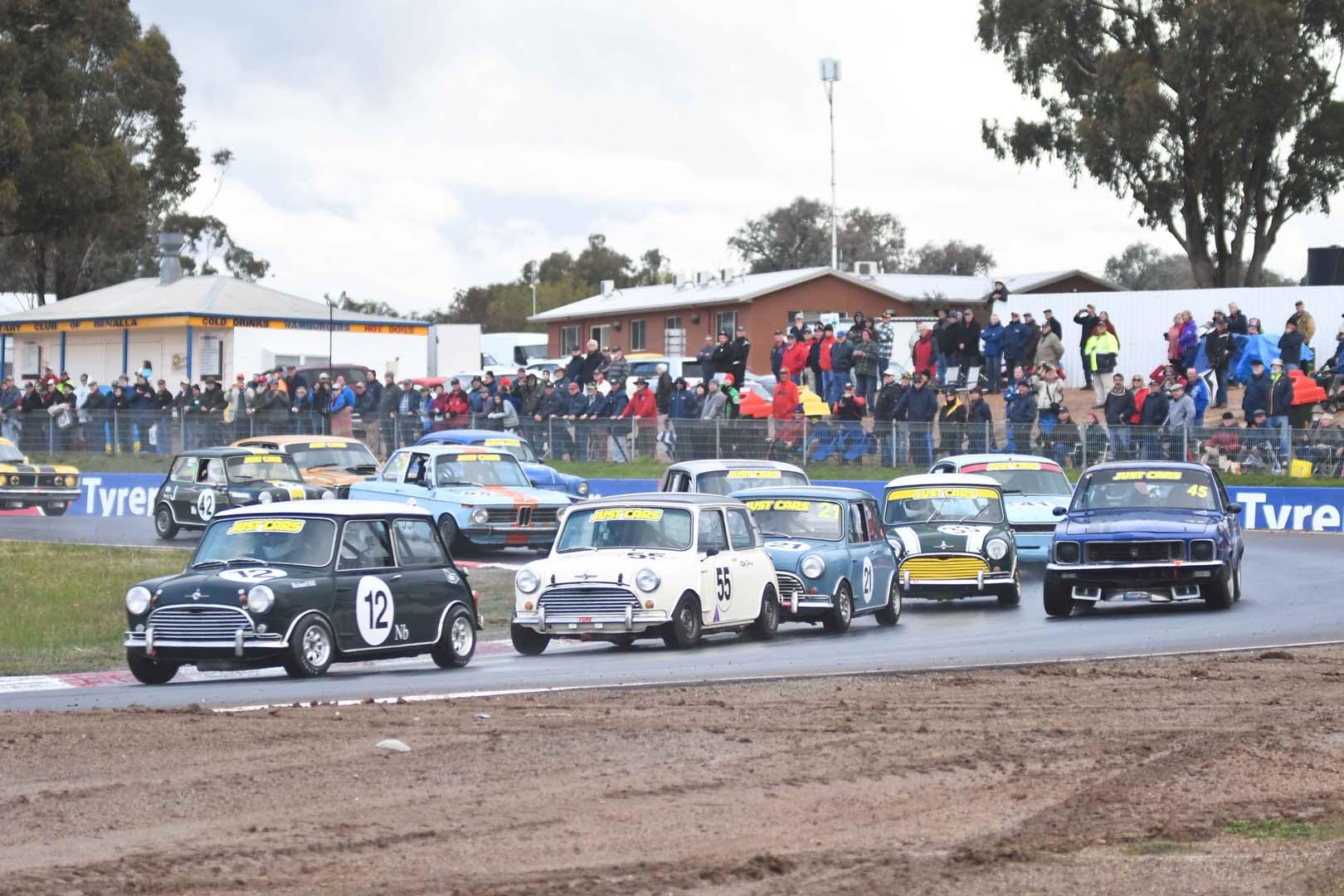