A Who’s Who of Group N national racing descended on the hallowed Mount Panorama this past Easter as one of the support categories for the Hi-Tec Oils Bathurst 6 Hour. There was a total of 47 Historic Touring Car entrants – 38 Group Nc and 9 Group Nb - with fast cars and drivers from every state, all battling for bragging rights on Australia’s greatest motor racing circuit.

The usual Just Cars windscreen banners may have been missing but the HTCAV was well represented. A 17-car contingent was made up of familiar names, spread across both groups, including those very much missed of late - Elliot Barbour (Torana) and Les Walmsley (Charger) - coming back refreshed and improved after a two-year layoff. Both were expected to be quick, with HTCAV regulars, such as Michael Miceli, Chris Stern and Andy Clempson in their very fast and flamboyant Mustangs, also tipped to feature near the pointy end.

Practice - WA HTCAV member Paul Stubber (Camaro) took the early honours, a mere hundredth of a second ahead of NSW’s Brad Tilley (Mustang). Further afield, Tony Hubbard and David Brown maintained respectable times and ensured that their immaculately well-dressed cars returned as they left – the Camaro and Datsun 1600 both impressing.

Qualifying - Stubber claimed pole, ahead of Brad Tilley and his son Jamie in their Nc and Nb Mustangs. Barbour’s professional driving skills made his Torana the fastest six-cylinder in the field, qualifying seventh, with Stern tenth, followed by Clempson, Miceli and Walmsley, then NSW HTCAV members Jason Humble (Mazda - 14th) and John Harrison (289 Mustang - 17th.).

In the midfield, Glenn Miles’s Charger headed WA member Tony Gilfuis’s Capri and the Holden HQ of Danny Myers in qualifying, to grid up just ahead of QLD member Gary Edwards’s Torana. 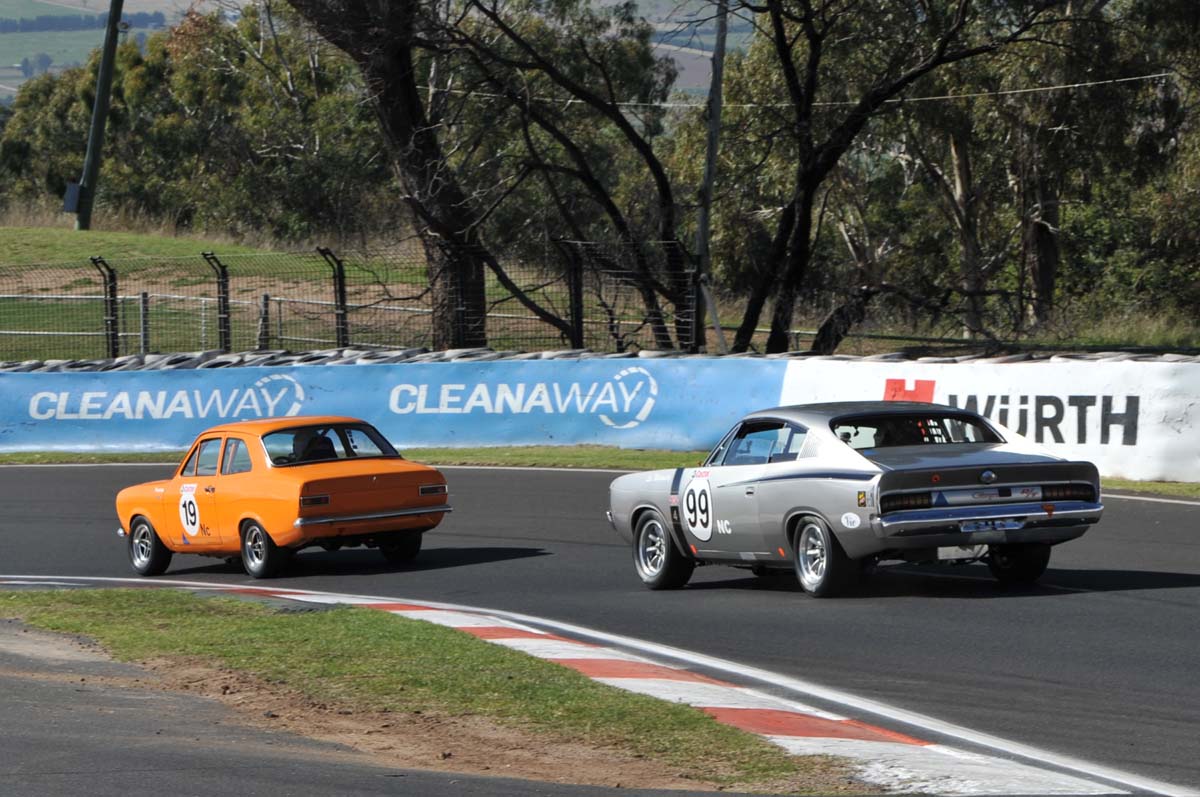 Bathurst debutants Andy White (Volvo) and Simon Browning (Cortina) were at the tail of the grid, but improved on every practice lap.

The stage was set for an intriguing battle at the front, but it was to be short-lived…

Race 1 – Poleman Stubber streaked up the hill for the first of five laps, but cold tyres and pushing the Camaro hard across the top of the mountain resulted in a brake lock up and glancing contact with a wall. Limping the Camaro back to the pits, Stubber was out without completing a lap.

Brad Tilley was now in front, followed by Jamie, the father and son pair leading the pack down Conrod Straight.

The field barely had a chance to settle and find their groove before the safety car came out on lap 2, caused by a tyre blow out on the Myers HQ.

Brad Tilley eventually took the win from Ben Wilkinson (Mustang) and Peter O’Brien (XY Falcon GT). Jamie Tilley was the first Nb runner home in fourth, while the best of the Vics was Miceli in seventh, followed by Barbour, Stern and Walmsley.

For Tony Hubbard (Camaro), Miles and Brown, a mid-pack finish would have to do, while Clempson’s big Mustang blew a power steering line – but he still managed to finish the race, albeit well back in the field.

Bathurst rookies White and Browning were at the rear, but acquitted themselves very respectably.

Race 2 – The second race started off poorly for Hubbard, with he and two others out on the opening lap.

After his Race 1 bingle, Stubber’s team had worked miracles to get him back on track, albeit starting from the rear of the 42-car grid. With furious pace and impressive manoeuvring, Stubber passed half the field - 21 cars - on the opening lap alone!  Up to fourteenth place a lap later, Stubber then found himself stuck behind the Mustangs of Harrison and Dale Parry, and only able to improve one more place before being forced to DNF a lap from the chequered flag.

At the head of the field, Brad Tilley led the way from Jamie Tilley initially, then Wilkinson. When Jamie Tilley reclaimed second, he held it to make it a father and son 1-2. Wilkinson finished third, ahead of O’Brien’s big Falcon and Grant Wilson’s Camaro.

The Miceli Mustang was the first Just Cars racer home in sixth, ahead of Walmsley, Barbour, Stern and Humble. The improving Gary Edwards (Torana) claimed fifteenth, ahead of Miles. Gilfuis filled eighteenth, with the giant-killing David Brown Datsun easily the fastest four-cylinder on the grid, in 22nd. Clempson, carrying a 20 second penalty, was pushed down to 26th ahead of Myers after a safety car put paid to his rear-of-grid charge.

Alan McKelvie, getting to grips with the daunting circuit, had hauled his Mustang up the time sheets to 34th in Race 2, while White and Browning sandwiched John Clarke’s Mustang at the rear of the field.

With half the field being V8s, it was always going to be hard for the little cars, but Tasmania’s Lachlan Thomas was outstanding in his 1300cc Escort, getting hosed on the long straights before repassing the big cars over the top of the circuit. NSW’s Andrew Bergan in the lone Mini tigered away, while Shane Cowham’s immaculate HD Holden X2 was great to watch.

Stay tuned for the Just Cars racers’ next exciting interstate raid, to The Bend in SA.

Mark Johnson at MJR Motorsport in Lilydale, Victoria, has recently made changes to his business model so he can concentrate on supporting his customers who regularly compete in motor racing events, both in Victoria and interstate.

Mark is now working on his own, so is able to prioritise his time providing race car preparation, from full engine rebuilds to required fabrication and suspension set up and changes. 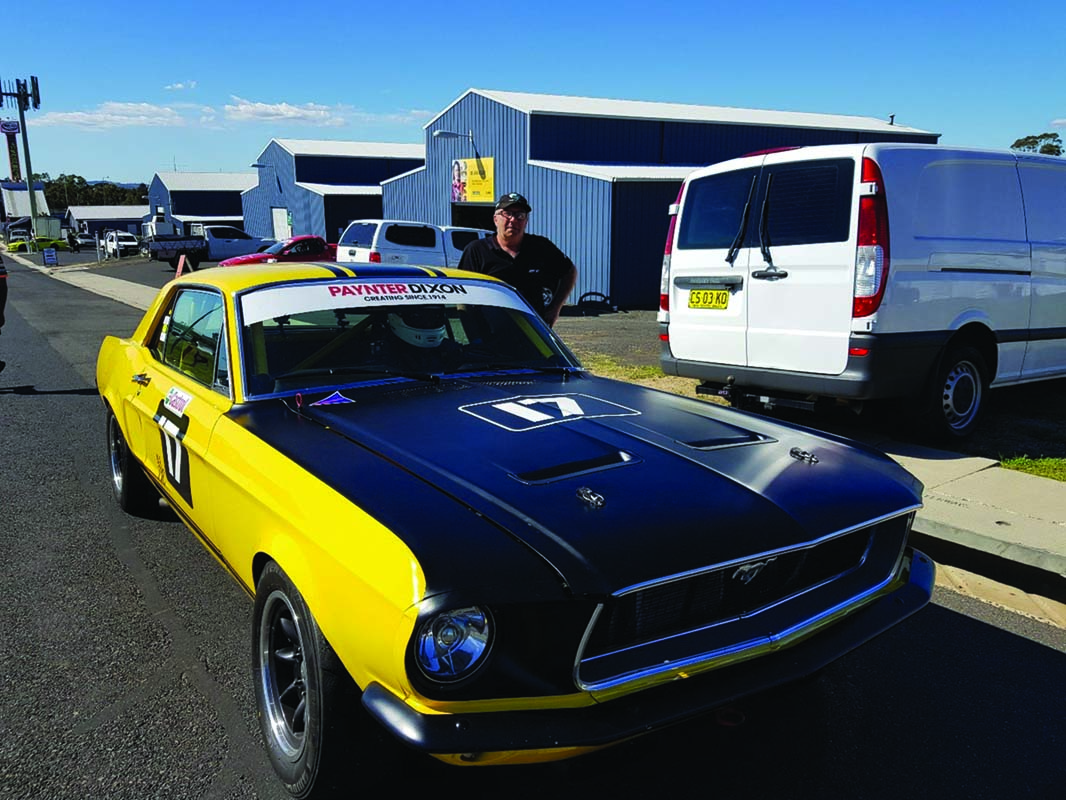 He also specialises in classic car servicing and recently serviced and replaced the clutch on a ZF trans axle 1972 De Tomaso Pantera.

The photo shows Mark at Mt. Panorama with customer Al McKelvie’s 1968 Trans Am Mustang that was driven in the Group N historic touring car support races at this year's Hi-Tec Oils Bathurst 6 Hour.