After a rough start and a lot of uncertainty, the 2021 HTCAV season wrapped up in style at Island Magic.

The always popular ‘Island Magic’ meeting capped off a year of two halves for the Historic Touring Car community. After all sorts of COVID-related cancellations and uncertainties in Victoria, the warm weather, longer race formats at one of the world’s truly great racetracks and a return to some sort of normality was welcome. 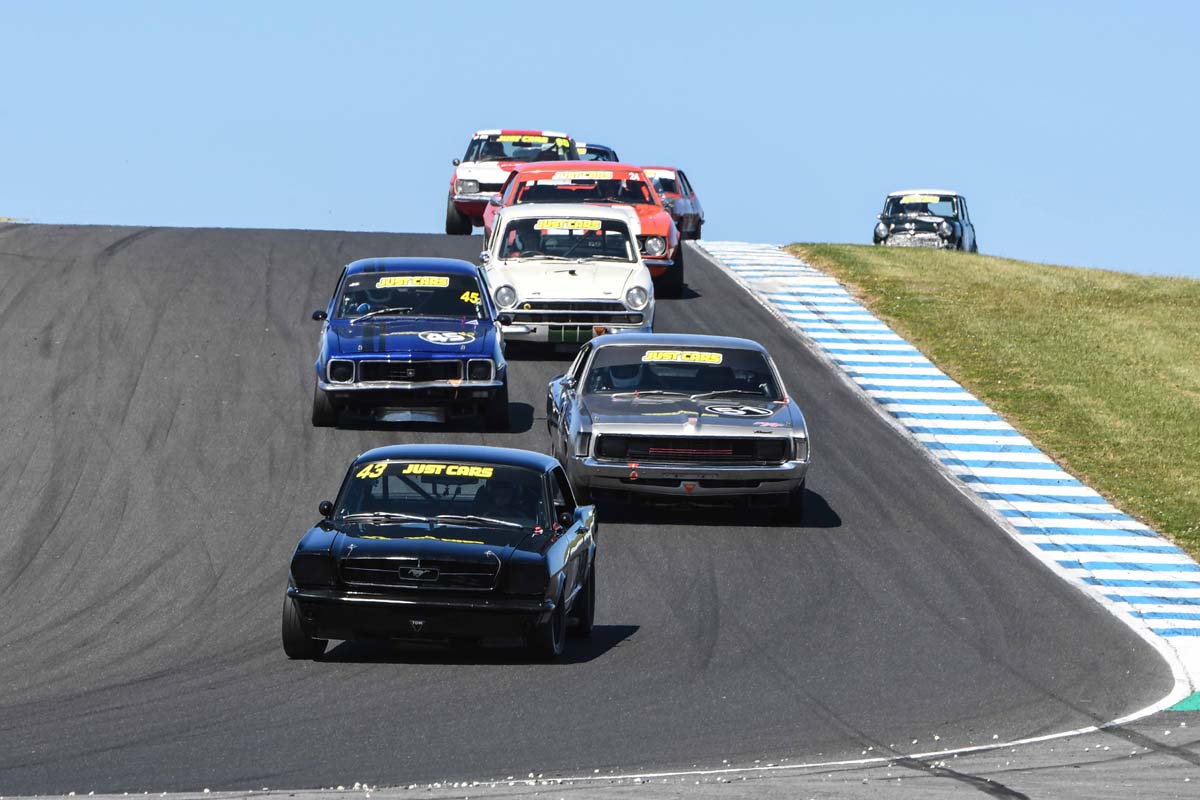 As Island Magic usually offers a chance for someone to clinch the Club Championship and slap the number one on their door for the following season, big grids are the norm and this year was no exception, with 35 starters.

Michael Miceli (’69 Mustang) was always expected to be on the pace having won this meeting five times. He didn’t disappoint in 2021 with a pole time of 1.50.6 - two seconds clear of Peter McNiven’s Mazda and the Camaros of Trevor Talbot, Brent Trengrove and Tony Hubbard.

NSW’s John Harrison was next in his yellow ’65 289 Mustang, ahead of Darren Hossack (Mazda) and Glenn Miles (Charger), with David Brown (Datsun 1600) and Mark Brewster (Torana) rounding out the top ten in qualifying.

To pay tribute to recently-passed club member Alan McKelvie, the warm-up lap for Race One was different. The HTCAV sent out two former McKelvie race cars (Torana and Mustang) to lead the field around to the grid. Members of Al’s family and the crew from his car preparer, Mark Johnson Racing, were rapt to see the two number 17s out front.

Brent Trengrove slipped into second place behind Miceli as Talbot retired with an annoying miss in his 350 Chev-powered machine, while former Supercars pilot and multiple Sports Sedan race winner Hossack was showing impressive speed in his category debut, moving his Mazda ahead of Harrison’s Mustang to grab third place.

Fellow Group N newbie Brett Ferris hurled his stunning Torana into a great battle with the all-black Mustang of Pete Meuleman, who came to Island Magic with a great shot at the Club Championship. His only realistic rival, Simon Browning, looked to have his chances dashed when his Mark I Cortina started overheating.

Brent Trengrove retired with a front disc centre ripped out and Brewster, who had had earlier challenged the impressive Charger of Glenn Miles for fifth, joined him when his Torana blew a head gasket.

With these retirements, the Mazda of Peter McNiven was in contention for a podium until he became caught up behind a dicing pack of backmarkers on the final tour and fell off before re-joining.

At the front of the field, Miceli was untroubled and took the win, as well as the inaugural Alan McKelvie Trophy – an impressive laser-cut metal rendering of the PI track layout, fittingly with a ‘17’ at the top.

Harrison was second, then Miles, Hossack and Peter McNiven, who recovered to finish fifth. Bill Trengrove (Falcon Sprint) was sixth and first home in Nb for pre-65 cars.

Hubbard would start his Camaro from the back of the grid after missing Race One due to a blown gearbox in qualifying. Hossack also had work to do, electing wisely to start from pit lane as the Mazda was intermittently sticking in gear.

Race Two got underway with Harrison pressuring Miceli early, while Craig Miles (debuting a flash new Chrysler Limelight Green paint job on his Charger) was out early after a holed sump dumped a heap of oil at the Honda hairpin. The very rapid Brown spun his Datsun on said oil and fell from an impressive fifth place before re-joining.

Second generation racer Stephen Pillekers (Torana) had a ding-dong dice with Bill Trengrove while Hubbard went out with an electrical gremlin, as did the Torana of Nathan Gordon.

As in Race One, there was nothing between the Cortinas of Don Knight (GT) and Michael George (Lotus), with the pushrod GT coming out on top after some great racing.

Race Two went the way of Miceli, from Harrison and Peter McNiven, who bested Glenn Miles for third. Talbot sliced his way through the field and posted second fastest lap on his way to fifth. James (father of Peter) McNiven punted his own Mazda into eighth in front of Bland and Ferris.

This was the big one – the 10-lap final for the traditional Cup. Harrison made a great start to lead into Doohan Corner before Miceli roared up alongside and quickly switched back up the inside into the Honda hairpin to take the lead.

Peter McNiven fell off at turn two on the opening lap and plummeted down the order, while Darren Jones (Mustang) was heading in the other direction after starting from the back thanks to a fuel pick-up problem in Race Two.

Glenn Miles came under sustained attack, first from Talbot then Hossack, as the luckless Hubbard again retired. “It needs a birthday!” the rapid veteran would later ruefully quip.

Peter Van Summeren (Lotus Cortina) was hassled by the Mini of Richard Hill as Talbot climbed into second and set off in pursuit of Miceli. Two wily panel beaters hard at it – but Miceli kept his head down and did not let the Camaro get any closer as he cruised to his sixth 50km Island Magic Trophy.

Talbot was second, then Harrison, Hossack, Glenn Miles and Peter McNiven who had been 24th at one stage after his opening lap excursion. Bland lobbed his Capri into seventh, ahead of Gordon’s XU-1.

In his first meeting in the ex-Walmsley Charger, Ben Dahlstrom finished a solid ninth and Mr Consistent, ex-HTCAV Champ Stephen Pillekers, completed the top ten in his Torana.

For his clean sweep of pole and all three races, Miceli deservedly won the Makulu Vehicle Storage Driver of the Meeting award, as well as the PIARC Historic Touring Car Trophy and the inaugural Alan McKelvie Memorial Trophy. Quite a haul!

After a 19-year build, it must have been very gratifying for Ferris to win the Repco Best Presented award, as well as make a stunning Island debut.

A mighty race weekend and a great finish to a year best forgotten, Island Magic saw the race to be the 2021 Club Champion go right down to the wire.

So who won? Find out in the next issue of JUST CARS…