Close racing and a few dramas welcomed in the HTCAV competition year, with the Just Cars racers rarin’ to go.

For the Just Cars racers’ first foray of 2021, at Round 1 of the Victorian State Race Series at Sandown on 19-21 February, it sure didn’t seem like high summer in their qualifying session as they slipped and slid around a track greased-up by rain. 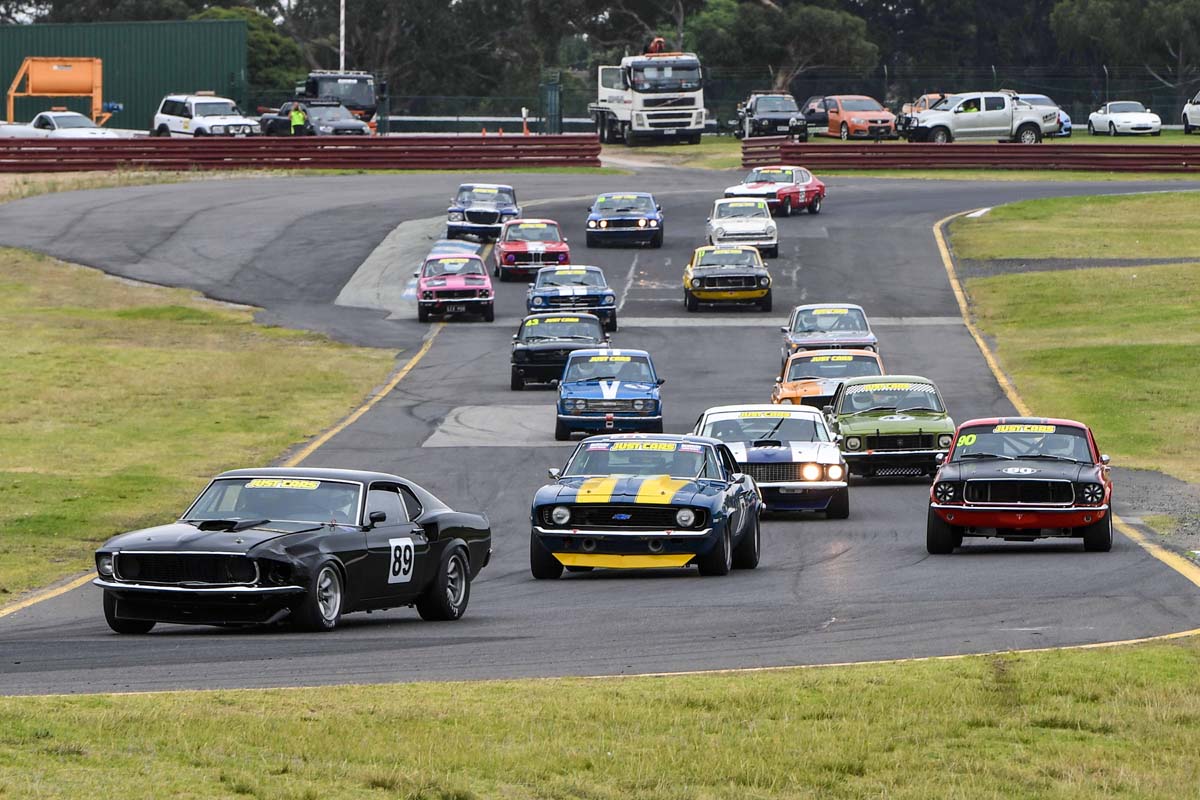 Many of the big cars couldn’t buy traction on the slime. Revs rose, cars twitched on the straight and more than one entrant spun to become a sitting duck facing oncoming traffic, especially at the treacherous Turn 2.

A topsy turvy result saw the fired-up Chris Stern, in the ex-Andrew Whiteside Trans Am 302 Mustang, secure pole. Alongside Stern on the front row was his young cousin Harry Draper (a great day for Geelong!) in the Datsun 1600 carrying car number 1, signifying his 2019 Club Champ status. Third was ‘Hollywood’ - Andy Clempson in the 351 ’69 Mustang Fastback. Fourth was Scott Slater, returning to Historic Touring after four years away, in the seat of the genuine Torana GTR XU-1 formerly raced by his late father, Graham.

On the third row, Rob van Stokrom had his BMW 2002 in front of Michael Miceli’s Mustang Fastback and John Mann’s Camaro.

With such a mixed bag right through the grid - Lap 1, Turn 1 would be interesting indeed. But for Darren Fortuyn in the HQ Holden and Roddy Evans in the Chev Nova, it was the end of their weekend.

Race 1 – Life in the Fast Lane

Nary a fleck of paint was exchanged as the monster V8s engulfed the cheeky smaller cars before Turn 1 and it was the screaming 302 Mustang of Stern that led them around for the first lap, with the charging Andy Clempson’s 351 Mustang in hot pursuit.

Stern’s off-pole energy actually saw him jump the start as he tore off down the front straight, so he was shown the 5-second penalty flag as a brake shudder caused him to drop back.

Miceli, Mann and the much-improved Andy Lane in his black 351 Mustang were breathing down Clempson’s neck. Miceli retired with clutch problems, while Lane misjudged the T2 braking and clipped Clempson into a spin. Dismayed, Lane led to the flag from the halfway point ahead of Mann.

Post race, there were many apologies from Andy to Andy and no hard feelings, but two weeks later, a 30-second penalty was applied to Lane, demoting him to sixth and promoting Mann to the win, Stern to second and Clempson to third.

Dominic Leo in the ex-Stern/Bugelly/Stephen/Bailey ’68 Trans Am Mustang (yep, one of the first Group N Mustangs built, back in the late ’90s) and Slater’s sweet-sounding XU-1 were next. Lane’s penalty saw him shuffled back to fifth, ahead of Draper’s Datsun and the battling 289 Group Nb Mustangs of Pete Meuleman and Darren Jones, just two tenths apart.

Lane’s immaculate black Fastback got the jump on Mann’s Camaro, while Stern’s Trans Am made a perfect start from third, grabbing second from Mann to latch on to Lane and stay there to the end, finishing less than two tenths behind at the flag.

Only another 0.3 seconds in arrears was the fast-finishing Clempson, heading Mann, Dom Leo and Miceli, who had started with Alan McKelvie’s ’68 Mustang Mustang from the rear of the grid, the latter finishing 0.4 seconds behind Slater's Torana and ahead of the rapid Datsun 1600 of Draper.

Meuleman won the Nb Mustang battle over Jones this time, the pair split by David Crabtree - the open wheeler driver getting used to racing a touring car – in the ex-Lawrie Nelson Capri.

In the BMW stoush, van Stokrom headed Justin Brown, followed by Conner McLeod in the now famous ‘Sexy Lexy’ pink Torana XU-1 recently returned its original owner - Conner’s mum - after being stolen in 1992. With an engine and suspension untouched from the ’90s, it did very well all weekend.

Race 3 - Bit of conSternation about noise

For the Historic Touring faithful, Stern’s howling Trans Am 302 was music to the ears. It was sounding way too good – and too loud for the man with the noise meter. The system had not been altered from the previous unpinged owner but had tripped the meter in qualifying at Sandown. The same measures that had fixed another car were applied but it still wasn’t legal, then came Race 3 and the drama continued…

At the start, Stern screamed away with Lane’s Fastback hot on his heels, posting faster lap times but not able to pass. On lap four, Lane finally nabbed him, but Stern hung on. By lap seven of the ten, Lane had run out of brakes at T1 and Stern regained the lead with Clempson’s Fastback glued to his tail. After five years of bad luck, this was looking like Chris’s big chance for victory and he tigered away with only two laps to go.

Oh no! Another noise flag was shown to Stern on the penultimate lap, but he finished the job, earning frowns from the stewards and a 30-second fine, demoting him to sixth and handing the win to Clempson, ahead of Mann, Miceli, Leo and McKelvie.

Stern’s battle-buddy Lane had recovered enough brakes to claim seventh, ahead of Slater, Draper and the ever-improving Meuleman.

The van Stokrom and Brown BMWs led home ‘Sexy Lexy,’ with Simon Browning’s Cortina and Ben Dahlstrom’s Valiant at the tail of the field, only a second apart at the chequered flag.

Sandown proved to be a great start to what promises to be a strong year for the Just Cars Historic Touring Cars. The Phillip Island Classic (now run) was only two weeks away from this season opener, the Bathurst support races four weeks from that and the big meeting at The Bend is coming in early May. Bring it on!