The end of lockdowns and State border closures saw JUST CARS Historic Tourer entrants from around Australia leap at the chance to race at the 33rd Phillip Island Classic.

Amongst the Historic Touring contingent, a total of seventy-five entrants ensured there would be two separate grids for one of the world’s best historic race meetings. A different split this year – Under 2 litres and Over 2 litres - placed the rotary-powered Mazda RX-2s with the big boys. With races from Friday through to Sunday, it was a big test of man and machine… 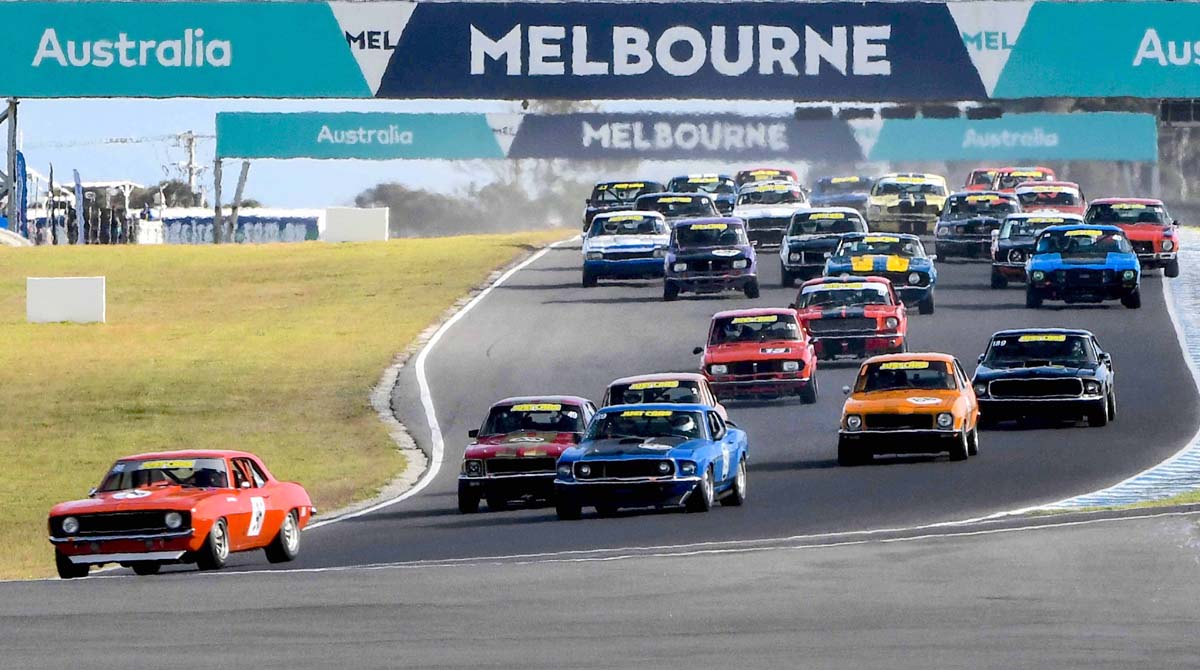 Under 2 Litres and Invited Cars

David Brown (Datsun 1600) grabbed pole with a 1.54.4 lap, just over half a second clear of Group S Alfa racer Adriano Dimauro, who was enjoying a guest steer behind the wheel of Rob Burns’s Alfa GTV. The second row was made up of BDA Escort punters David Noakes and Mark Lenstra from New South Wales, while Rob van Stokrom qualified fifth in the BMW 2002 ahead of Peter van Summeren’s Lotus Cortina.

Dimauro showed immediate speed to lead the field in the opening race, while Brown had a great battle with van Stokrom until the former fell off at the tight MG corner, re-joining behind Noakes.

Dimauro ended up taking the win from van Stokrom and Brown.

Now behind the wheel of a Cortina, former Charger man and 2017 HTCAV Champion, Les Walmsley, retired with ignition woes as his team worked through various issues with his new, unsorted Ford.

Losing a couple of spots with wheelspin off the line, Brown was soon back up at the pointy end and all over the tail of the leading van Stokrom. He came a cropper though, diving into Honda hairpin on the inside when a touch to the BMW’s rear wheel saw it pointing the wrong way, van Stokrom losing many places waiting for a gap in the traffic to re-join.

Having started from the back of the grid due to head gasket problems earlier in the meeting, Spencer Rice (Alfa) was hurtling through the field and up into sixth in no time. Behind him, van Summeren and Hill were locked together while Roberts and Andy White (Volvo 122) ran in close company.

Despite having done very little racing in the last few seasons, Helen Lindner (Mini) was showing all her old pace, knocking on the door of the top ten.

On the final lap of Race 2, Rice posted the fastest lap as he caught Dimauro entering the front straight. The two Alfas hit the line side by side in a dramatic finish that saw Dimauro take the win by .03 of a second.

The two Alfas scooted off into the distance as the Minis of Brewster, Hill and Roberts ran three wide for a brief moment, while White suffered a major mishap when the Volvo holed its block, dropping oil everywhere at the hairpin.

The Lotus Cortina of Peter George spun and was collected by the hapless Lindner who had nowhere to go, ending her race while George was able to continue.

Dimauro had his own moment, too, running off between turns 11 and 12 but re-joining without losing his second place as a now untroubled Rice took the win by almost 3 seconds. Van Stokrom completed the podium ahead of van Summeren and Hill.

As the Alfas once again led the field away, Brewster posted a rare DNS with a gearbox issue in his Mini.

The highlight of this race was a monumental scrap between the Cortinas of Walmsley, Peter George, Paul Atkins, Mike George and Don Knight. The small Fords climbed all over each other, harking back to the mid ’90s when grids featuring upwards of a dozen Cortinas were a common sight.

Behind the squabbling Cortinas, Phil Barrow was right on their heels after earlier maladies with the fastest FJ Holden in the land.

At the flag, Rice just held off Dimauro for another great Alfa 1-2 finish, with van Stokrom in third again.

With tanks topped up for the 8-lap final, the 19 remaining contestants lined up for the 61st and last event of a fantastic three days of racing.

Knight’s Cortina bogged down badly off the line with a dislodged float in one of the Weber carbs, but Atkins was flying to lead the pack of nine Cortinas.

Barrow, deciding he’d had enough of looking at Cortina rear ends, sent his Humpy barrelling into Honda hairpin during a fight with Michael George, but overcooked it, looping on the exit and facing the wrong way.

Rice saw off the challenge from Dimauro once again, rounding out a top weekend for the Sydneysider, while van Stokrom took third in his BMW to wrap up his “best weekend of racing ever”.

After two years away from the Island, WA’s Aldo De Paoli (Camaro) was back and rewarded himself with a mighty 1.47.3 lap to take pole - a full second ahead of Queenslander Ian Mewett (Mustang fastback), Victorians Michael Miceli and Andrew Lane, both in Mustang fastbacks, and Marc Tessari’s HQ Monaro.

Rob van Stokrom’s son Daniel was top Torana, ahead of Queensland's Craig Allan (Torana) and Jason Humble's Mazda RX-2. Humble’s 1.50.0 showed that rotaries are right up there with the big iron.

De Paoli was a little too eager at the start of race one, rolling before the lights went out and earning himself a ten second penalty. Tessari and Miceli made it a Holden v Ford scrap behind the flying Camaro before Miceli grabbed second place down the front straight.

The Toranas of van Stokrom and Allan engaged in a huge dice with Humble as former GT and TCM racer Keith Kassulke was swiftly working his way into the top ten in the ex-John Mann `69 Camaro.

Nathan Gordon was another driver acclimatising to a new mount, swapping his Torana for an HQ Monaro originally built by Paul Stubber’s crew in WA (who also produced the Tessari HQ and De Paoli Camaro).

At the fall of the chequer and after the time penalty was applied, Miceli was awarded the win from Tessari, with De Paoli third ahead of Hogs Breath Traralgon proprietor Andrew Lane (Mustang), then van Stokrom and Allan.

Tessari would not start due to an oil leak, nor would John Harrison, whose immaculate `64 Mustang shot a push rod clean through a rocker cover!

Lane made the start, but came in after one lap with electrical gremlins, while van Stokrom retired soon after.

De Paoli built an unassailable lead to win comfortably from Miceli and the ever impressive Humble.

Off the podium, Allan just held off Peter McNiven (Mazda) for fourth, followed by NSW’s Adam Walton and Darren Hossack, making it four Mazdas in the top seven.

Miceli made a great start, shadowing De Paoli for the first three laps before grabbing the lead on the fourth. Was De Paoli just foolin’? No, they’d tried something different on the car and it hadn’t worked, so Aldo was throwing everything he had at the Mustang.

In a fantastic scrap, Humble and Allan were all over each other until the latter had a big “tank slapper” at Siberia, forcing Humble off and losing several places before re-joining.

On the last lap, Darren Jones (Mustang) fell off at MG Corner after harassing reigning HTCAV Champion Peter Meuleman (Mustang). The two had been glued together in all previous races, just as they had at Sandown a few weeks previously.

Miceli led within sight of the chequered flag, but De Paoli used all of his extra 48 cubic inches to grab the win by just over a tenth of a second. McNiven was third in front of Allan and Hossack.

This stand-alone five lapper would celebrate the 50th Anniversary of the Holden Dealer Team’s Bathurst 500 victory in the Torana GTR XU-1, with the Trophy awarded to the first Torana home. The demise of van Stokrom’s Torana with a cracked head made Allan’s quest for this piece of silverware slightly easier.

As Miceli and a couple of others had elected not to run in this race, due to the main 12-lapper being just two hours’ away, De Paoli was allowed to build an early lead as Humble shook off the attentions of Allan to consolidate second place.

Meuleman slid off in spectacular fashion entering the front straight and somehow kept his car from spearing back onto the race surface, while the closely following McNiven did a superb job of slowing up his Mazda and not pole-axing the Mustang.

More drama followed on the last lap when Gordon lost the Monaro at Southern Loop whilst trying to hold on to third in front of a hard-charging Kassulke, the Camaro cannoning into the HQ’s rear.

De Paoli, with a big lead and only a few corners to go in this demonstration race, began to throw his Chev into some lurid, smoke-belching drifts - to the delight of the big crowd! Humble chipped in with a couple of big slides of his own en route to second ahead of Allan, whose third place meant he took Brock Trophy honours. The Mustang fastbacks of Lane and Darcy Russell completed the top five.

With the grid for the Over 2 Litres finale based on the finishing order of Race 3, Miceli was back to challenge De Paoli - but before that he had to fight off Tessari who was again showing impressive pace in the Monaro. A relative newcomer to the JUST CARS Historic Tourer ranks, Marc and brother David had previously won just about everything possible in the tightly contested six-cylinder HQ class.

Dahlstrom and Brett Ferris (Torana) had a close dice in the early stages as Walton charged into the top ten from the rear of the grid in his 289-powered `64 Mustang.

The battered HQ of Gordon was in action, but the handling clearly wasn’t 100 per cent, allowing Russell to drive around the outside, with Heffernan doing the same in his Torana shortly after.

Allan and Tessari had a huge battle until the Torana had half a lose at the hairpin with two laps to go, allowing Tessari and Humble to sweep past the Queenslander.

A Weekend to Celebrate

A fantastic weekend of motor racing was enjoyed by the JUST CARS racers at this year’s Phillip Island Classic.

The big fields, the number of races (from short sprints to what almost amounted to enduros for these 50+ year old cars), the great weather and celebrations made it one to remember.

To top it all off, 170 people celebrated the 2021 HTCAV Championship Awards Night in the hospitality rooms above the pitlane garages on Saturday.

The next JUST CARS adventure is the elective support round for the Bathurst 6 Hour, before the iconic Historic Winton at the end of May. That’s a meeting for every old car enthusiast!