The Historic Touring Cars got the 2022 season underway with a strongly contested event at Sandown.

With some JUST CARS racers saving themselves for the big Island Classic, a reduced field of 15 Historic Touring Cars mixed it with 17 BMW E30s on a busy grid for the 2022 HTCAV season opener – the State Race Series at Sandown International Raceway this past February. It was a weekend of good battles and great camaraderie as old mates got back together for the first time in months. 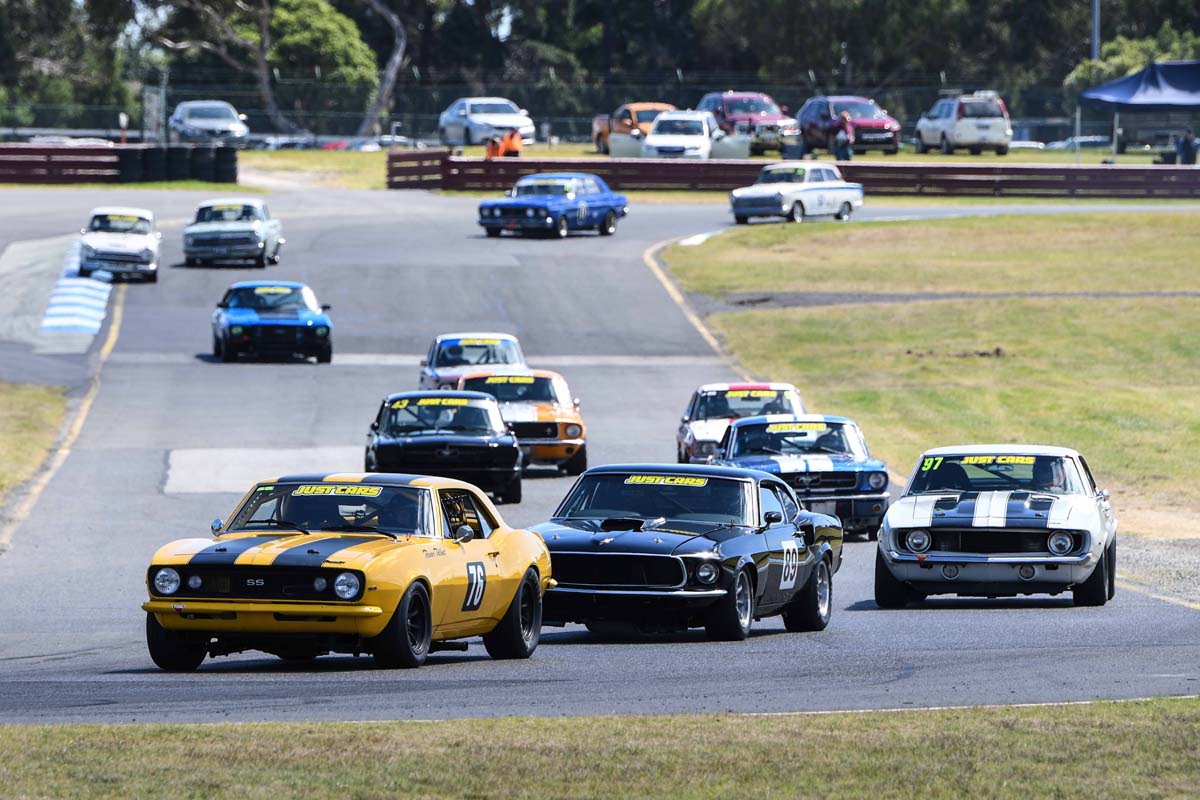 Darren Collins grabbed pole with a lap time of 1.20.9: over a second quicker than fellow Camaro punter Trevor Talbot’s 1.22.1, with Andrew Lane’s black Mustang Fastback just over .2 seconds behind him.

Dom Leo in the ’68 Mustang was 2 secs further back in fourth – and then came the battling Nb 289 Mustang twins of reigning champ Pete Meuleman and his battle buddy Darren Jones, with the latter squeaking ahead in qualy by a mere hundredth of a second. This set the stage for very entertaining combat all weekend.

Nathan Gordon, in his newly-acquired, ex-WA blue HQ Monaro, fronted up on the dummy grid. But, without the full complement of tags and gaudy wrist bands required for both race and Covid acceptance, was sent back to the paddock, muttering more than darkly.

Revenge was to be his, but not until later in the weekend…

The fastest BMW E30 qualy times put them about midfield in the historic touring car grid, so they were started a full minute after the HTCAV runners had taken off. This fair calculation had not reckoned on the tail-end E30 being very slow off the mark and, as the safety and medical vehicles followed it patiently down the main straight, they were overwhelmed by an onslaught of bellowing V8s into Turn 1.

Collins had not made the best of starts and was jumped by Talbot and Lane off the line. With performances so close and the Lap 1 confusion, it was not a gap he could make up and the trio ultimately finished in the same order.

Dom Leo also had an iffy getaway in Race 1, but after eventually disposing of the 289 Mustang twins of Jones and Meuleman, worked his way back into fourth, only to fade over the last few laps as the engine lost compression and the car was retired for the weekend.

Behind the two Nb Mustangs was Gordon, who had stopped cussing and started charging, grabbing sixth in the Monaro to secure a third row start for Sunday morning’s race.

Former open wheeler driver Crabtree has now mastered the art of getting the Capri off the line, so his rocket start had him well up with the V8s for the first few corners, while Pejkovic’s EH just beat George’s Lotus to the finish line by less than a second.

Browning led Holloway home, while Dobson and Pearmain were retirements. Ferry’s EH was out of action before the race got underway.

There was no mistaking Collins’ intent and he blasted into the Race 2 lead immediately, with Talbot and Lane scrapping behind him. But wait – not so easy!

Further back, George’s Lotus had broken the gearbox output shaft and he was stranded on the grid - with 17 BMW E30s behind him, waiting for their start.

Out came the red flag and the historic touring cars weaved their way through the E30s back to their grid spots as the Lotus was towed off the battlefield.

Start 2 to Race 2 saw Collins fail to repeat his ripper start, which allowed Talbot to grab the lead and hold it for the first two laps.

Behind the pair of Camaros, Lane, who had been pinged for noise in Race 1, found the Fastback’s performance noticeably curbed after fitting a quieter muffler.

These three held station at the head of the field while another rocket start from Crabtree saw him in fourth at the end of Lap 1. He would be displaced by a charging Gordon on his way to a PB, then the duelling Nb Mustang twins of Jones and Meuleman.

Crabtree would ultimately finish in seventh, ahead of the BMW of van Stokrom, with Pejkovic, Browning, Holloway and Pearmain completing the order.

As the two Camaros and Lane’s black Fastback blasted off for the 10-lap final, little did they know that an E30 ploughing into the guardrail on the exit of Turn 4 would halve the race distance with a red flag.

Poor Lane was cursing the throttled muffler performance of his Mustang, even having to go back to first gear at the Dandenong Rd corner. Closely following, the hard-charging Gordon saw his chance and executed a great overtake in the Monaro, taking Lane down the inside into Turn 1 to put himself into a podium position.

Of the Nb Mustangs, Meuleman turned the tables to lead Jones home this time, ahead of Crabtree, van Stokrom, Pejkovic, Browning and Holloway in the Mini he’s owned forever.

Pearmain was tail gunner again, but the gallant 3.4 Jag Mk1 was noticeably quicker in this race.

It was a good meeting to start the year and a great sorting-out for those looking to also enter the Island Classic, giving them a shakedown and handy seat time before facing the 75-car, two-grid event.

Next issue, there’ll be a complete race report on the JUST CARS racers at the Phillip Island Classic. Don’t miss it!