In just his first full season with the Historic Touring Cars, Pete Meuleman took the crown.

When laid-back surfer Pete Meuleman decided to go Historic Touring Car racing, he never thought he’d ride a break to be an almost-rookie HTCAV Champion! “Mate, I am so embarrassed,” laughs the sandy-haired welder. “A participation award maybe, but how did I end up with this?” 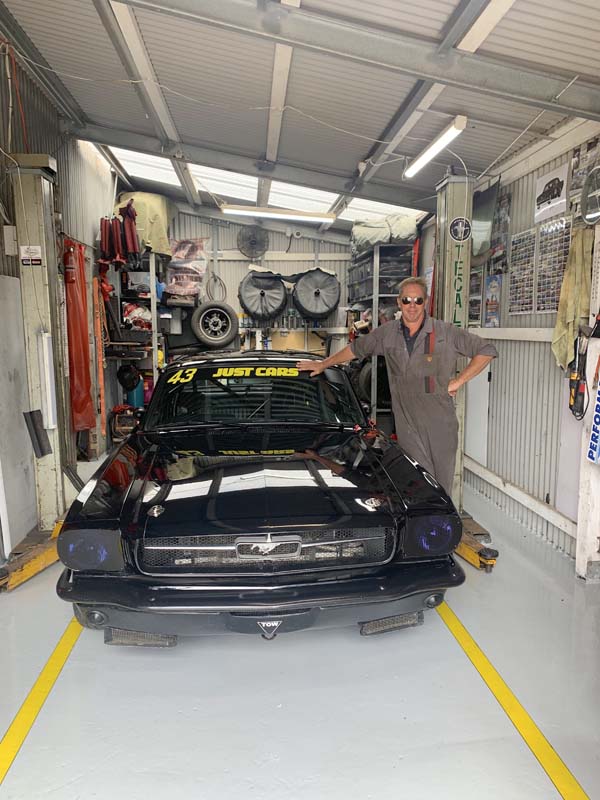 A Championship is a long haul

Motor racing stories everywhere are full of unlikely outcomes. So many aspects in the mix have to work together - one slip, one component failure and it can all fall apart. Was it good luck or good management in Pete Meuleman’s case? Let’s find out the whole story…

Peter was a surfer, and still is. If the property he has on Victoria’s Mornington Peninsula was any closer to the pounding back beach surf he’d be living on the sand. He’s had it for almost 40 years and for most of that time it’s been the halfway house for all his surfing mates – some of whom are his pit crew: “Yeah, we’re just a bunch of surfies masquerading as a race team,” he grins.

Before Pete was a legit dole-receiving member of Bob Hawke’s Surf Team in the ’80s, competing around Victoria, he’d been a young mechanic at a Ford dealership. And after a couple of years on the bones of his sandy bum, sleeping in his board bag, eating Weetbix with no milk for breakfast and a can of cold baked beans for dinner, it kind of occurred to him that maybe, just maybe, being a mechanic might have been the better life.

So he dropped out of being a drop out and returned to being a mechanic in a heavy vehicle and plant workshop where he learnt fabrication and welding.

Today his Nepean Welding business operates right there at home with him on two surfside acres. A choice of four beaches within board-carrying distance for his old passion, a choice of four garages for work and his new passion - historic touring car racing.

“In my 50s, I wanted another sport to supplement surfing; motor racing called. I’d been crewing for a mate of mine, Wayne Mercer, who raced an XY GTHO in Touring Car Masters,” Pete explains.

“In the paddock I picked up an HTCAV brochure and thought – this is it! It had to be a Ford, but I didn’t want to mix it with the Nc front runners until I’d learnt the ropes, so I thought a 289 Group Nb Mustang would be about right.”

After buying a running car that needed a lot of work, Pete started off by asking those in the know for advice.

“John Mann, Les Walmsley and David Twigg were very helpful and I got stuck into making my historic Mustang.”

Pete finally went testing at Winton and had a great time. Driving back down the Hume he called Dick Savy of Savy Motorsport and excitedly uttered the fateful words: “Mate! Build me that engine please!”

That proved to be a great decision.

All the best bits had to go in it, but Pete wasn’t chasing the ultimate neddies. Reliability was what he was after.

As a rookie, outright wins weren’t on his radar, either. He needed to learn his trade, do lots of races and finish every single one. Which in 2021 is exactly what he did.

At the Phillip Island Classic in March, 2020, Pete and his car turned a wheel for the first time. He looked around at the other cars, and being a chatty chap, had soon gleaned new information. One of the things he discovered – his car was overweight.

No racing that year didn’t mean no activity. Lockdown only spurred him on – less is more!

Pete took the car completely apart and dropped the shell in an acid bath. Then he painstakingly rebuilt it bit by bit, anything that looked extraneous got the elbow. The roll cage was overbuilt and ugly, so he built and gained certification for his own.

Wow! He’d saved 90kg and turned up at Island Magic at the end of 2020 to gasps of surprise – and a few ‘ahems’. In his zeal for adding lightness, Pete had jettisoned a few bits he should have kept. So, about 30kg had to go back in, but he’d still saved the weight of a medium sized passenger. With the Mustang’s bout of bulimia over, Pete was ready for 2021…

Pete didn’t even think about the point score in his first proper year, he just wanted to go motor racing. But he wanted to maximise seat time and learn as much as he could, starting steadily, working up to a decent pace – and finishing every race.

“With all of the racing, testing and track days, the car has finished every single session,” Pete says, “I have many people to thank for that – most of all Dick Savy. Apart from building me the best engine and sourcing other parts, he’s been right there for me, whether in the pits or on the phone, asking what the car’s doing and not doing and suggesting changes for the better.”

And because he’d taken it apart and put it back together it was “his” car – he knew every square centimetre of it and established a rigid maintenance program.

So, it all came together. Every finish racked up more points and Pete got quicker and quicker, picking up a few class wins along the way after some stirring battles. Planning, preparation, practise and persistence – that’s the winning formula for any sport and Pete had all of that in droves.

He’s pleased with the result, and proud of his achievement in winning the 2021 championship, but: "Don't think I'll be putting No. 1 on the side of the car this year,” he laughs, “that might be going too far.”

We disagree, mate. You ticked all the boxes – enjoy the fame!