When he took the plunge into historic touring car racing, there was only one car Stuart Barnes wanted to race. 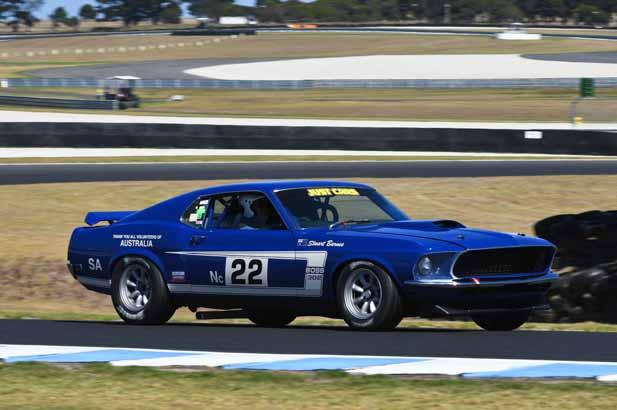 This HTCAV driver profile is a little different from the norm, in that it’s not about a Victorian. But as past articles have revealed, Victoria’s Historic Touring Car community open their arms to drivers from every state and territory, including the likes of Bill Attard and Wayne Rogerson (the Mazda Mafia!) from NSW, Ian Mewett and Craig Allan from Queensland, Josh Axford and Rory O’Neill from SA and not forgetting the WA contingent of Tony Gilfuis, Dean Neville, Aldo de Paoli, Paul Stubber and 2018 HTCAV Champion Darryl Hansen.

Another one of those “outsiders” is Stuart Barnes. A late starter in motorsport, the South Australian was introduced to Historic Touring Cars by accident…

Stuart loves his Fords, so when the opportunity came to take the plunge into historic touring car racing, he was always going to do it in a Ford.

Stuart’s interest in Fords, and particularly Ford race cars, was fueled by witnessing Alan Moffat’s famous ‘Coca Cola’ Trans Am Mustang go up against the likes of Beechey, Jane and Geoghegan at Warwick Farm in ATCC competition: “Back then, I thought, ‘I have to have one of those’,” Stuart recalled.

A wife, children and putting a roof over their heads got in the way of those thoughts and the dream sat dormant until the 1990s, when a mate convinced Stuart to come over to the Sandown Historics, as a field of 14 Formula 5000 cars were promised. The event proved to be a real eye-opener for Stuart – but not for the open wheelers!

“I hadn’t realized Historic Touring Cars still existed – I thought they had died out after Appendix J,” Stuart laughed. “Bugger the F5000s, all I had my eyes on were the touring cars, like the Geoghegan tribute Mustang of John Mann.”

Stuart had an epiphany there and then - he would go historic racing. . . . once he got the kids out of the way! 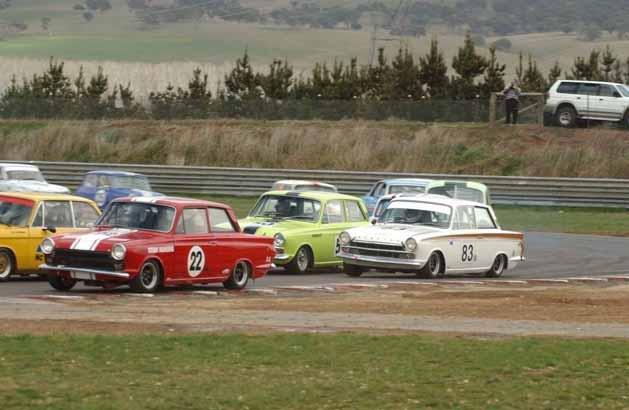 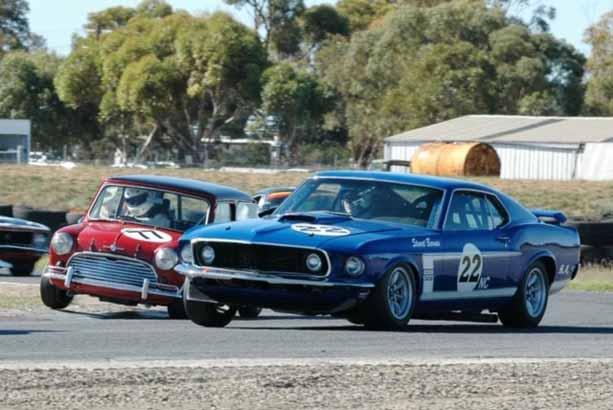 With no racing experience to that point, Stuart knew the smart thing to do was at least try some trackwork before he opened his chequebook.

“I had a go in the V8 Toranas at a Gary Baxter Trackskill event at Mallala and got the quickest time of the day.”

Soon after, Stuart joined the SA Historic Touring Car Club and confidently told club reps he wanted to get a Mustang and go racing.

When asked how much racing he’d actually done, Stuart said ‘None’, but thought all the ski boat driving he’d done would be an acceptable substitute.

“For my own safety – and probably theirs, too! – I was told I should start out in a Mini or Cortina to learn some track skills,” Stuart recalled. “It was probably the best advice I ever got.”

Stuart’s love for Fords (his first car was a ’64 Cortina 240) meant that, if he had to start small, a Cortina was the only choice for his first track car.

“The Phillip Island Classic was coming up and the guys from the SA Historic Club suggested I join them and bring my chequebook.”

At that 2002 Island Classic meeting, Stuart spotted a Cortina that Stephen Tate (son of Ian Tate) had for sale. That car had been built in 1997 by Jim Collins and raced by him and his son Darren in HTCAV competition before it was a sold to Tate in 2000 (the story on the Collins clan featured in JUST CARS #275).

“After seeing it race on the Saturday, I bought it on the Sunday and the next weekend, I was doing laps around Mallala in it – I couldn’t wait for my first race!” Stuart laughed.

Highlights from that time included running in support classes for Supercars events at the Clipsal 500, Barbagallo and Bathurst.

While Stuart was having a ball in the Cortina, the urge to drive a big car was still there. 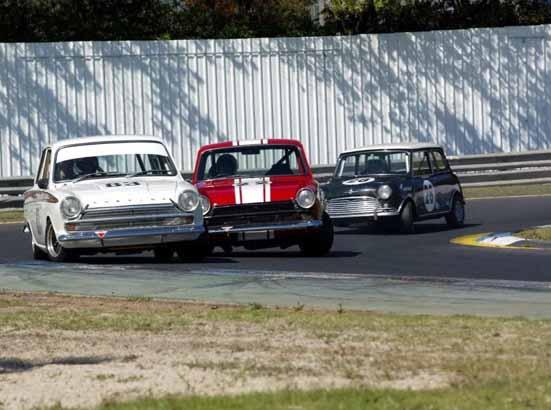 The hunt for a Mustang (and make no mistake, it HAD TO be a Mustang) to go racing with started in 2004, but it wasn’t until 2006 that the right car came up.

The Mustang in question – a 1969 Boss 302 fastback – had been imported from the US and completely stripped down before changing circumstances led the seller to part with it: “She was pretty much just a shell, with no running gear and boxes of parts.”

Given Stuart’s plans, the car’s bare bones condition was ideal, but it certainly didn’t fast track the project.

To keep the Mustang within Group N guidelines, the path the build had to take was largely pre-determined, but even on areas where there was some latitude, Stuart wasn’t going to take shortcuts: “I decided we’d build her with the best of everything and no expense spared.”

The 5.0-litre V8 – a Windsor Boss block with Clevo heads – was custom built by PM Engines in Adelaide to produce 575+hp at the flywheel.

A modified Ford 4-speed Toploader and 9-inch rear followed, with the Group N rules allowing for things used in period competition, like extractors, a trans cooler and 31-spline axle kit.

Where Group N has less latitude is in the areas of suspension, brakes and wheels, so modern Koni shocks and King coil springs are to the same size and spec as those raced in period. Same goes for the disc front and drum rear brakes – going bigger is a no-no, but competition-spec pads can be used. The wheels are still 15-inch Superlites, too, matched to Hoosier rubber.

Inside, a pair of Velo Apex race seats, a Momo steering wheel and Stewart Warner gauge package were fitted, with a Walker roll cage keeping everything safe.

With the body already gutted, Stuart had it chemically stripped to bare metal and the steering converted to right-hand drive before fitting the roll cage and sending it off for painting.

For a man who loves his Fords, there was only one choice when it came to the paint - Ford Corporate Blue. Granted, it’s not a colour Ford offered on the production Boss 302 Mustang in ’69, but it is the colour that featured on the Boss Mustangs prepared by Shelby Racing and campaigned by Dan Gurney, Peter Revson and George Follmer in the 1969 Trans Am season. Replica Trans Am livery was added, too, albeit with a few local additions and alterations.

Three years in the making, Stuart’s Trans Am tribute Group N Mustang was completed in 2009, but building a car and having it function as a race car are two very different things, as Stuart found out.

“We progressively changed, developed and improved her,” Stuart explained. Those improvements included adding a Watts linkage made by Dick Savy and taking the car to Glenn Seton in Queensland (yes, THAT Glenn Seton) in 2017 to have the suspension professionally tuned. 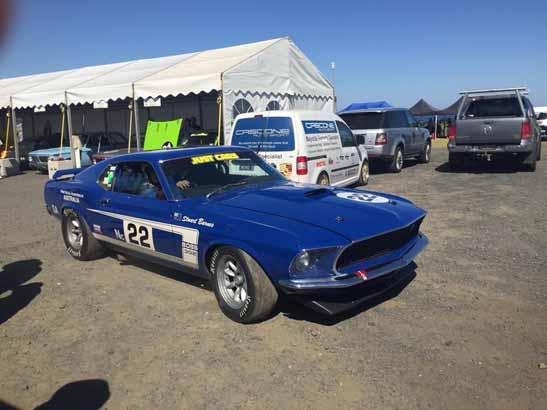 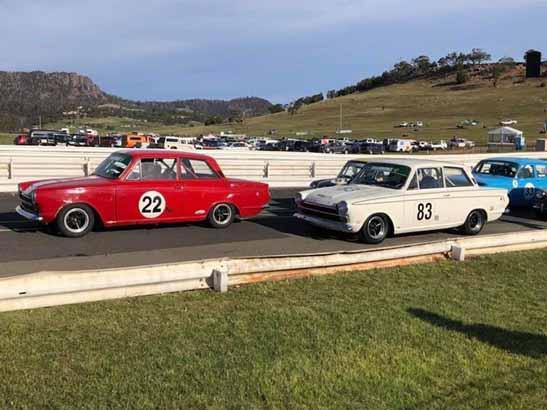 Running Around and Moving On

That trip to Queensland was co-ordinated with races at Morgan Park, Queensland Raceway and Lakeside, where Stuart ran third behind Supercar driver David Wall - in Pete Geoghegan’s original ’64 Mustang - and local racer Peter Baguley in a Torana.

That race remains the highlight in a package that includes multiple meetings at Bathurst, Phillip Island, Mallala, Sandown and Wakefield Park, to name a few.

All of this was achieved on a reasonable budget, which is one of the things Stuart likes about Group N racing: “We race at the best tracks in the country, but the rules we race under keep it a level playing field. No-one can come in with a million-dollar car that blows everybody away.

“Also, the people that race these cars have a real passion for this era of racing. There’s great camaraderie, too. I have been a (Historic Touring) member both in SA and Victoria for a long time and we were always welcomed, so I always looked forward to racing in the eastern states.”

After a decade of enjoyment with the Mustang, Stuart put it on the market in late 2018.

It didn’t take long for the Mustang to find a buyer in D’arcy Russell, perhaps best known for his Nations Cup campaigns in a Dodge Viper ACR back in the early ’00s. Coincidentally, D’arcy bought the Mustang at last year’s Phillip Island Classic; the same meeting were Stuart purchased his Group N Cortina all those years ago.

The Mustang may have been moved on, but the Cortina remains in the Barnes family garage, so when the urge strikes, Stuart can still indulge in a lap or two. 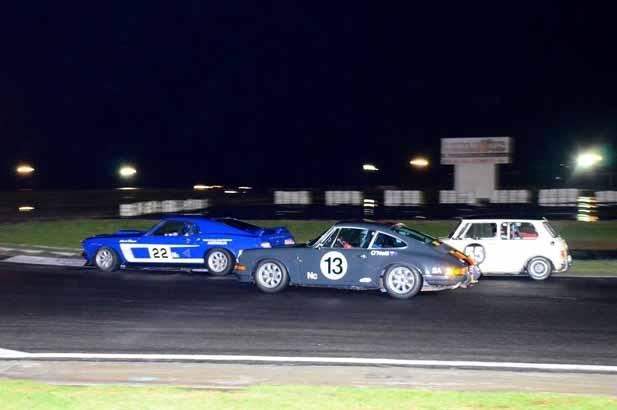 Your first opportunity to see the JUST CARS Historic Touring Cars in action in 2020 will be at the Phillip Island Classic Festival of Motorsport this March.

After having two grids of Historic Touring Cars - Under 3-Litre and Over 3-Litre – in past years, this year’s Phillip Island Classic will see all cars – from Camaros to Minis – all in together in one giant grid.

For the JUST CARS Historic Tourers, the opportunity to race at Phillip Island Grand is one that few pass up, and that’s reflected in a record 63 entries for this blue riband event, including eleven Mustangs, six Camaros and nine Toranas – a VERY well populated Over 3-Litre field!

The big boys of Group N love to stretch the legs of their Mustangs, Chargers, Falcons and Camaros on the fast and flowing Phillip Island Grand Prix Circuit, but they’ll have the additional challenge of dealing with slower cars in the Under 3-Litre class in each race’s closing stages, so expect some drama in the closing laps.

As well as the Historic Touring Cars, there will be a smorgasbord of other classes in action, from Regularity, Groups J and K, Formula Junior, Formula Vee, Groups Sa, Sb and Sc, to Group Lb Sports, Lb Racing and invited, Group A and Group C Touring Cars and the thundering Formula 5000 open wheelers (classes still TBC at time of writing).

Hosted by the Victorian Historic Racing Register, with Burson Auto Parts as major sponsor, the 2020 Phillip Island Classic Festival of Motorsport takes place at the Phillip Island Grand Prix Circuit this 5 to 8 March. Practice and scrutineering will commence from 5 March, with public entry to qualifying and the opening races from 6 March.

At time of writing (check the VHRR website for the latest information), spectator entry fees were unchanged from 2019 and start from just $30/person on Friday 6 March, up to $45/person on Sunday 8 March, with a 3-day ticket $95/person. Pensioner/concession tickets are $5.00 off full fee prices and kids under 16 enter free with a paying adult. 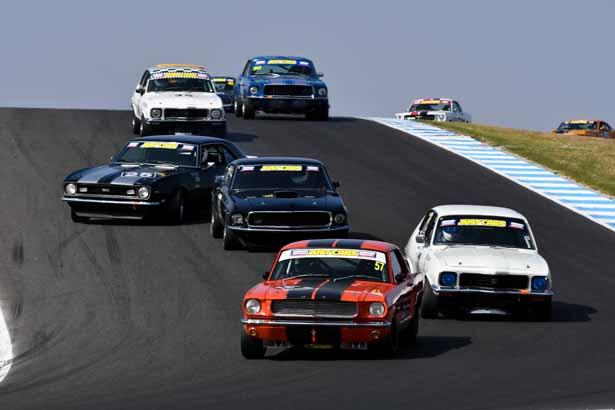 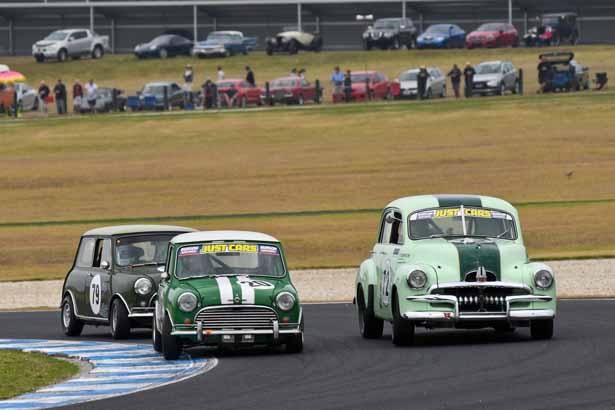 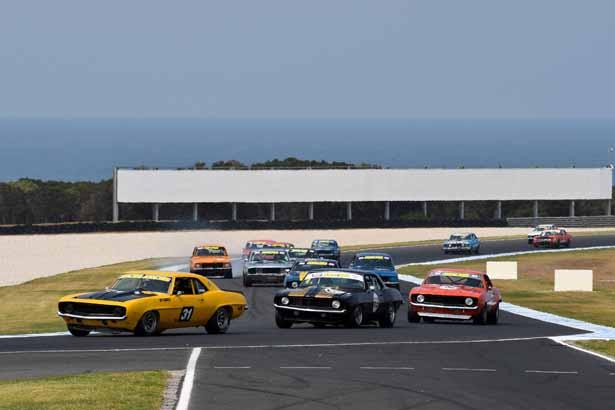