The ninth generation E-Class impresses, in either 2-door coupe or sedan Mercedes-Benz left no stone unturned in creating the ninth generation E-Class. Arguably the new W212 series E-Class is the safest, most comfortable, and thoroughly tested executive machine available. According to Daimler AG boss Dr Dieter Zetsche, the E-Class "was designed and built to be the best medium sedan in the world'.

Backing up this claim are some impressive statistics, as Benz went about their business of delivering their most important middle ranking vehicle. According to Zetsche, development of the E-Class cost billions, with more than 24 million kilometres in testing and development over four years. An extraordinary 1,400 prototype and pre-production vehicles were built, while it underwent 150 in house crash tests and 17,000 crash simulations before entering series production.

The result not surprisingly, is a vehicle that is stronger, safer, roomier, and far better value for money. There are two new body shapes - sedan and two door coupe. They are powered by a choice of petrol and diesel engines, with the full complement of engines to be available by the end of September. There is a strong emphasis on diesel power, with the sedan offered with the choice of three turbo-diesel, or three petrol engines. There are two 4 cylinder diesels - the 220 CDI (125 kW/ 400 Nm), 250 CDI (150 kW/500 Nm) - and the V6 350 CDI (170 kW/540 Nm).

For the first time, a diesel, the 220 CDI is the entry model to the E-Class range, replacing the previous supercharged petrol 200K. This model in turn has been replaced by the four cylinder turbo charged 1.8-litre petrol 250 CGI, which produces 15kW and 60Nm more than the 200K. The sedan is also offered with petrol V6 (200 kW/350 Nm) and V8 (285 kW/530 Nm) in the E350 and E500, both carry over existing powerplants. All three diesel engines have European rated fuel consumption figures under 7 litres/100km. The V6 and V8 petrol engines also have improved fuel efficiency.

The 220 CDI, 250 CDI and 250 CGI four cylinder engines are all mated to a 5 speed automatic, with all others equipped with the seven speed 7G-Tronic auto. Mercedes have managed to maintain a delicate balance between the more conservative classic overtones of the business oriented E-Class, while moving its presence into a stronger and more striking design statement. The new styling takes design cues from the 1950s Pontoon models, incorporating bulging rear wheel arches, while up front the new design includes quad headlight treatment wrapped around the new wedge shape body. More than being a design element, this new shape contributes significantly to a drag co-efficient of just 0.25, which translates into improved fuel economy.

The new model is slightly larger than the previous model, but inside the feeling is one of spaciousness, although in the coupe back seat adult passengers will still struggle for leg room. Notwithstanding, the interior is formal, with horizontal lines across the dash. Seating is comfortable, and the overall ambience is very pleasant.

Both the coupe and sedan are impressive to drive. The E 500 V8 petrol remains a personal favourite with awesome torque of 530Nm delivered at the slightest caress of the accelerator. The 7-speed automatic is silky smooth and for a more sporty experience in seletronic mode, the driver can treat this car like a sports car. Of particular note in the E-Class is the impressive armory of safety features which it packs. Many are innovative and new to mainstream Australian motoring and further progress the already impressive safety credentials of Mercedes-Benz (see following story for full details).

While there is nothing wrong with standard suspension settings set at Comfort, for my tastes this is a little too soft and the sedan exhibits a floating, near wallowing feeling. The air suspension system (standard in E 500, optional on V6 models) can be set in Sport mode, which provides a slightly firmer ride, while improving handling and stability. The E Class is very much a driver's car and I imagine would be a great touring car, eating up the kilometres in comfort and safety.

The V6 needs a little more pushing, but for most drivers, power and response is more than adequate. The coupe cuts a dashing profile and while part of the E-Class family, actually shares the same platform as the C-Class, whereas the E-Class sedan is built on a new platform. The coupe has a narrower dash, integrated head restraints and individual style seats in the rear. The coupe comes with 'agility control' suspension, with a firmer sports orientation. The Dynamic Handling Package is standard on the E 500 coupe and optional on other models. The package also includes steering wheel mounted shift paddles. The E-Class is available with a host of accessories and packages, but the individual climate control bears mentioning as does the clarity of the colour display in the dashboard. The satellite navigation was extremely accurate and in 3D mode was simply sensational. The coupe is available with a line-up of four engines, two suspension variants, four different wheel/tyre combinations and plenty of scope for customers to individualise. Basic equipment lines are Elegance and Avantgarde.

The AMG version will not (at this stage) be coming to Australia, although the top of the range E 500 does receive an AMG package as standard. The E-Class is an extremely satisfying car to drive in either sedan or coupe guise, and will undoubtedly continue to be a flagship model for Mercedes-Benz, as it remains the best mid sized luxury car available. 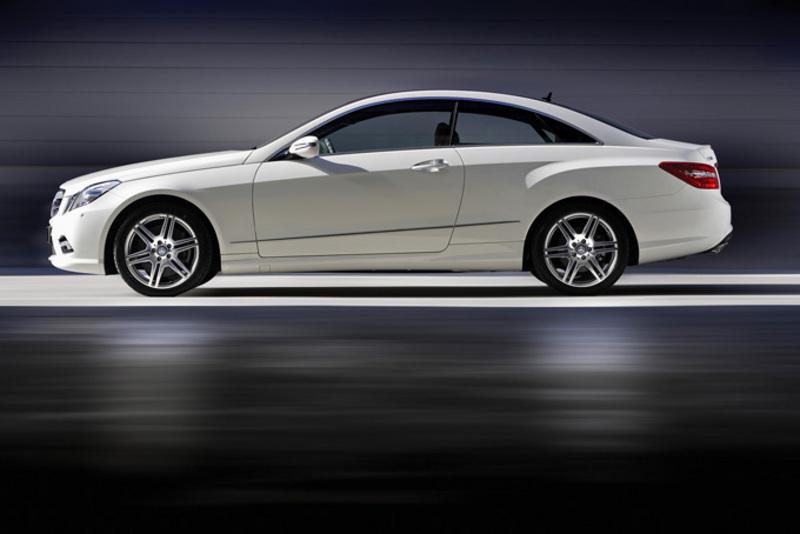 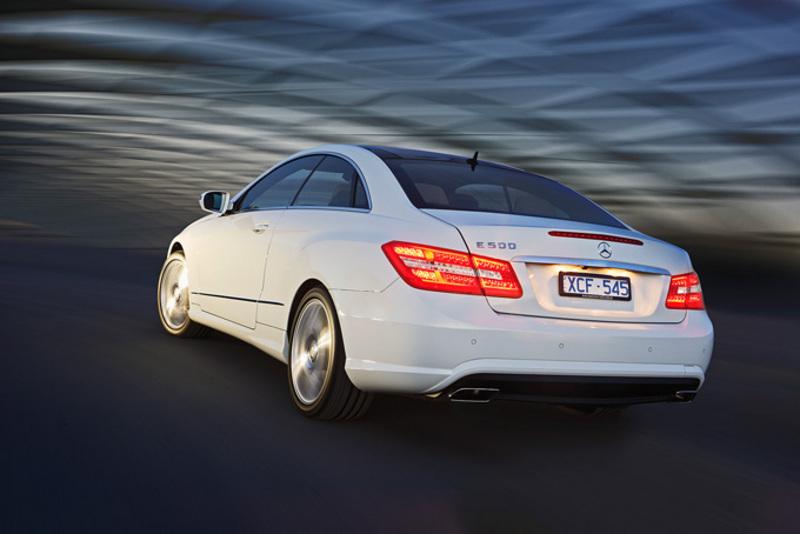 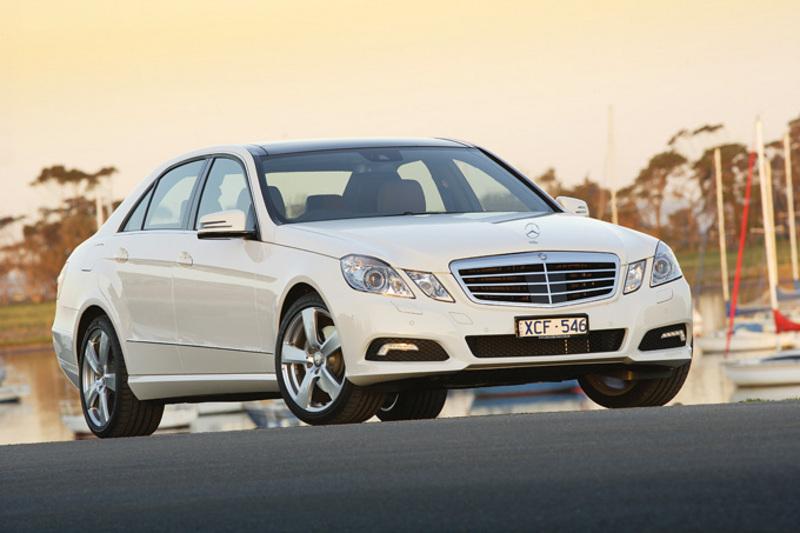 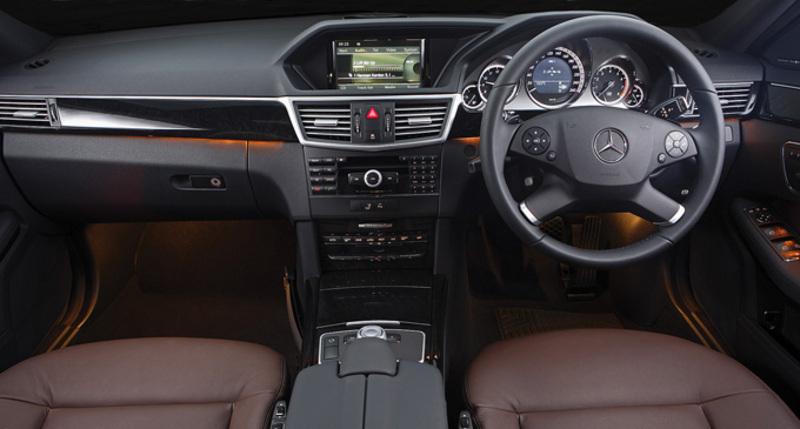 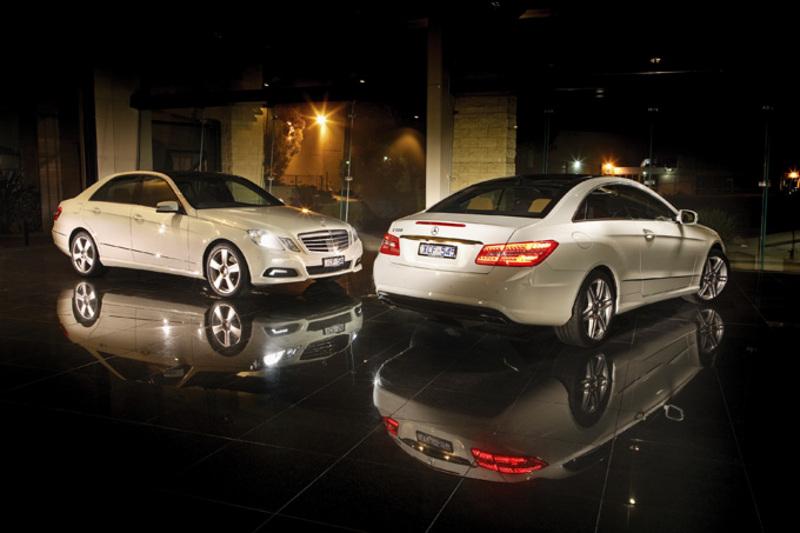