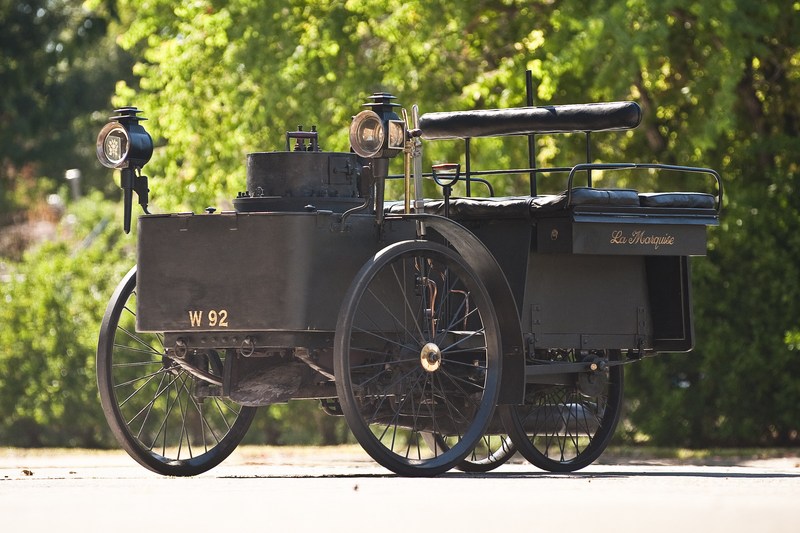 'De Dion Bouton' will be familiar to most early automobile enthusiasts, but Trepardoux was a third partner from the famous firm's very early days, hence his inclusion in the manufacturer's nameplate of this vehicle
One of the most significant, and certainly the oldest, privately-owned operational motor vehicles in the world will be a highlight of RM Auctions' Hershey sale in the US this October 6 & 7. The vehicle, built in 1884, came about from the collaboration between the wealthy Comte (Count) de Dion and a pair of young engineers, Georges Bouton and Charles-Armand Trepardoux.

'De Dion Bouton' will be familiar to most early automobile enthusiasts, but Trepardoux was a third partner from the famous firm's very early days, hence his inclusion in the manufacturer's nameplate of this vehicle.

De Dion took the two engineers into his employ in late 1881, with the objective of building a full-size, practical steam carriage. Their earliest efforts included a tricycle and large 'Victoria' quadricycle in 1883. This had belt drive and rear-wheel steering, and while it worked, was far from being suitable. A year later, they came up with a much more practical arrangement, which is the vehicle to be offered at Hershey.

Dubbed "La Marquise," after Count de Dion's mother, this quadricycle was smaller, steered with its front wheels and drove the back wheels through connecting rods, rather like a locomotive. But what made it different from road-going locomotives dating back to Cugnot's 1770 tractor was its sophisticated boiler, which could be steamed in 45 minutes. It was also compact at only nine feet long and relatively light at 2,100 pounds. It also had the basic 'layout' of all modern cars - four wheels, seats four, rear wheel drive, front wheel steering, and can be driven by one person. The only 'modern' feature it doesn't have is a steering wheel, the steering done by a spade handle-style lever alongside the driver.

The new steamer seated four people in pairs back-to-back - "dos-a-dos" as it was known. The seats were located on top of the steel water tank, which held 40 gallons, good for about 20 miles. The vertical boiler was ahead of the driver and surrounded by a bunker, which kept the fire fed with coal or coke through hoppers at the bottom, eliminating the need for stoking. A manual pump supplied water to the boiler initially, and when pressure was up to the operating level of 170 psi, donkey engines began working and water was supplied automatically.

Driving "La Marquise," Bouton participated in the first motor car race in 1887, from Paris to Versailles and back. Bouton won the "race", but he did have an unfair advantage, as he was the only vehicle to show up! The following year, De Dion in "La Marquise" beat Bouton on a three-wheeler, at an average of 18 mph.

De Dion produced sales brochures as early as 1886, with illustrations of a steam phaeton, dog-cart, truck, carriage and even an 18-seat bus. By 1889 you could buy a tricycle for 2,800 francs and a quadricycle for 4,400 francs. These prices, the equivalent of close to two year's wages for the average worker, meant sales were confined to the very rich. As such, only about 30 De Dion steamers were made: 20 tricycles, four or five quadricycles, and a few larger carts and carriages, according to the world's first automobile magazine La France Automobile in 1894. Two quadricycles remain and six tricycles are known to still exist, but none of those are operable.

Count De Dion kept "La Marquise" until 1906, finally selling it to French army officer Henri Doriol. The Doriol family owned it for 81 years but never had it running, since it had lost brass and copper fittings to the war effort in 1914. Doriol and his son attempted to restore the quadricycle, but gave up and put it up for auction in 1987. Incomplete and not running, it was bought by Tim Moore, a British Veteran Car Club member. Using an 1890 model De Dion Bouton et Trepardoux as a template, Moore remanufactured the missing pieces and had the 1884 original running inside a year. Despite being a steam novice, he remanufactured brass fittings and pipes that had been removed, and re-tubed the boiler in 1993 at a cost of $20,000. He also replaced incorrect wooden, iron-tyred wheels with correct spoked wheels and hard rubber tyres.

Moore campaigned "La Marquise" enthusiastically, including four London-to-Brighton runs. Awards won by the vehicle include the 1991 UK National Steam Heritage Premier Award for Restoration and Preservation, a double award at Pebble Beach in 1997, class winner of Pre-Century Steam Cars at Goodwood in 1999, and honored at the 1996 Louis Vuitton Concours at the Royal Hurlingham Club in London in 1996.

With impeccable provenance, fully documented history, and the certainty that this is the oldest running family car in the world, "La Marquise" represents an unrepeatable opportunity for the most discriminating collector. According to RM Auctions, it is unquestionably and quite simply one of the most important motor cars in the worlThe 1884 de Dion Bouton et Trepardoux steam quadricycle will join many other vehicles for auction, including a number of brass-era American, British and European models, at RM Auctions' Hershey Sale, at Hershey Lodge, Pennsylvania, this October 6-7. 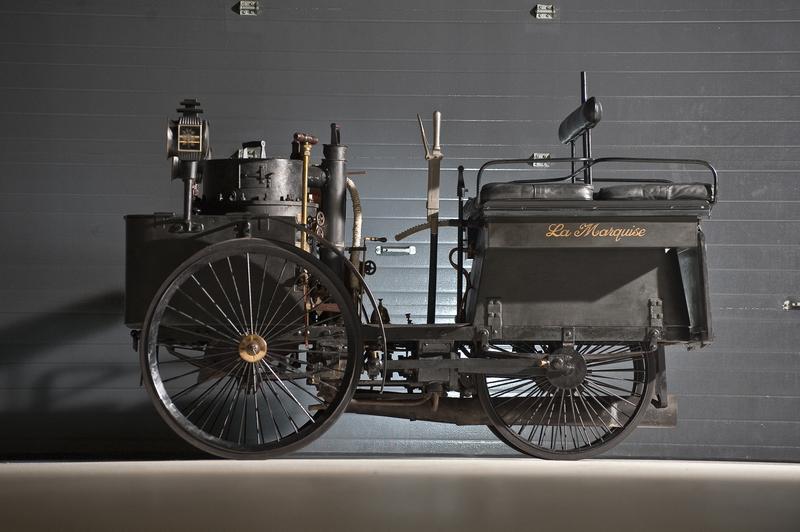 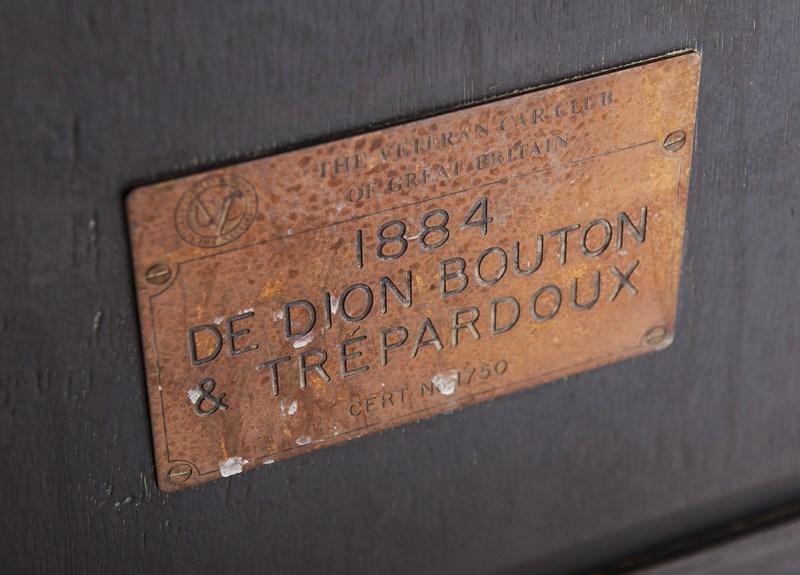 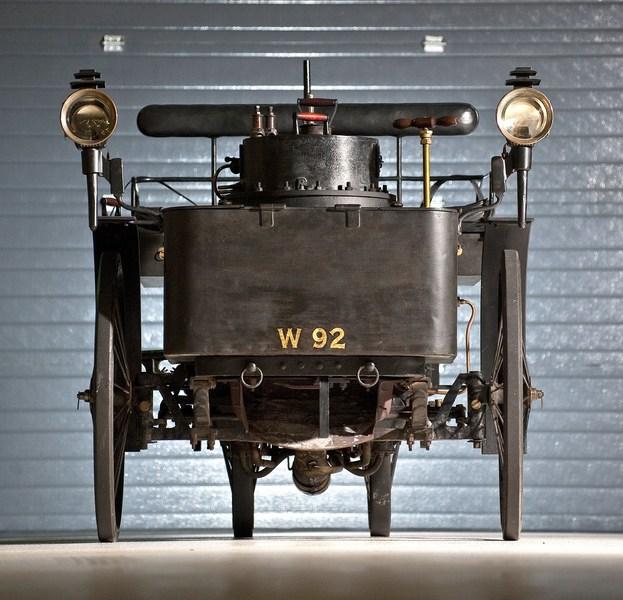