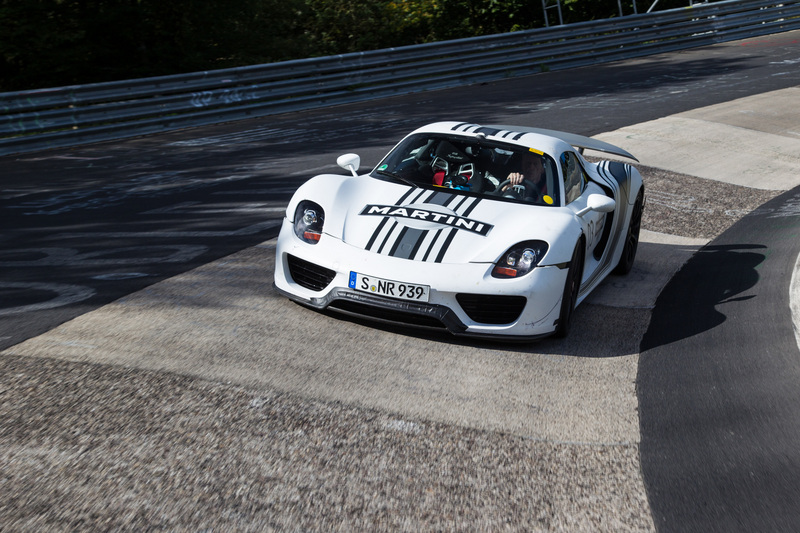 Any sub 8-minute lap of the Nordschliefe is impressive, with sub 7:30 times largely the domain of purpose-built (but still road legal) production sports cars and, unsurprisingly, Porsches.
On September 18th, in a test drive on the "Nürburgring-Nordschleife", a Porsche 918 Spyder prototype turned in a best time of just 07:14 minutes for the 20.6 km long circuit.

Any sub 8-minute lap of the Nordschliefe is impressive, with sub 7:30 times largely the domain of purpose-built (but still road legal) production sports cars and, unsurprisingly, Porsches.

What makes the lap time of the Porsche 918 Spyder prototype more impressive is that it was done from a standing start, and the Porsche development only had the track open to them for one lap.

At time of writing, the 7:14 recorded by the 918 Spyder is the best for a hybrid-powered car, and one of the best ever clocked for a street-legal vehicle with standard production tyres. The time also places the Porsche prototype inside the top five 'Ring lap times (a Radical SR8 currently holds the overall lap record of 6:48).

The plug-in hybrid super sports car with over 795 hp was equipped with production tyres from development partner Michelin as well as the optional "Weissach" package, which integrates modifications that boost driving performance.

Dr. Frank Walliser, overall project leader for the 918 Spyder: "By turning in a fabulous time of 07:14 minutes, the 918 Spyder prototype has already fully confirmed the viability of its future concept after just a few months on the road."

Production versions of the 918 Spyder are due for launch in late 2013. Porsche AG say their plug-in hybrid super sports car is already proving its performance potential and surpassing all expectations placed in it.