Once, it was a secret known only to Kalgoorlie locals. “Do you know that claypan out on the Kurnalpi road? Thousands of people went out there in the 1920s and ’30s to see the motor races. I can show you where it is, but keep it to yourself, won’t you?” . . . .

Motor racing at Lake Perkolilli in remote Western Australia started in 1914 and officially ended in 1939, but since 1997, the legend of the claypan circuit has been enhanced by a series of revival events where cars and motorcycles built between 1914 and 1939 recreate past glories. 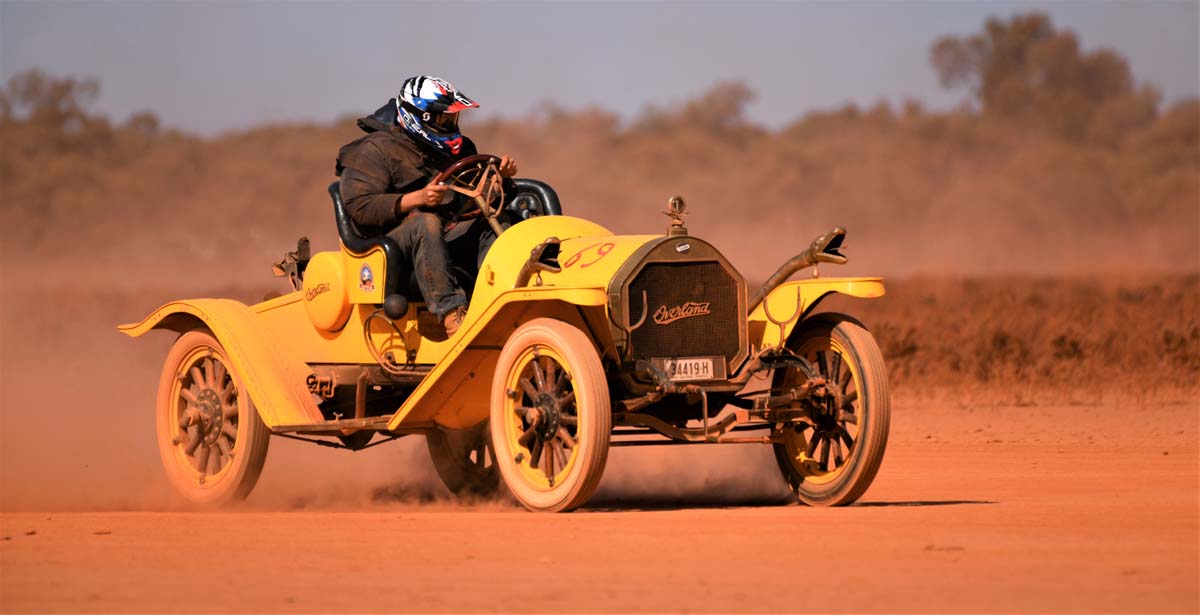 A History of ‘Perko’

Aussies have always been an inventive bunch. In 1914, they found themselves tens of thousands of miles from the great racetracks of Europe and America, with terrible local roads and nowhere to race car against car or motorcycle against motorcycle.

This was particularly true for wannabe racers in the goldfields of inland Western Australia, so Lake Perkolilli or “Perko” as it is called, was the answer.

A phenomenon unique to the Australian outback, where people made the best out of what little they had, Lake Perkolilli is located 23km from Kalgoorlie and close to the long-gone ghost town of Kanowna,

The dry lakebed’s shape and perfectly flat, smooth claypan surface made it easy to mark out a two-mile circle, so motorsport-hungry West Australians could go racing. And race they did for a quarter of a century, breaking Australian speed records and running sanctioned Australasian motor car and motorcycle championships.

A survivor of WA’s gold mining booms and busts, Lake Perkolilli is probably the only racetrack in the world that’s basically the same today as it was when it first saw action back in 1914.

Getting to Perko was an adventure in itself, requiring racers to tackle an horrendous trek from Perth – around 640km on unsealed roads and dirt tracks - to spend a week camping alongside the claypan, tuning their mounts in the dirt, then racing.

By the late 1920s, an annual carnival at Lake Perkolilli was attracting up to 10,000 visitors and even led to a small grandstand being relocated from a horse racing track to overlook the clay circuit.

Perko was now being called the “Brooklands of the West” - WA’s equivalent of the world’s first dedicated motor racing circuit near London in the UK.

Western Australia’s isolation from the eastern states has always encouraged an independent attitude and a form of motor racing with big displacement cars and motorcycles which could be raced flat out on the Perko claypan. As such, straight eight Auburns would be battling big Chrysler specials at speeds exceeding 90mph (145km/h) in blinding dust. There were exotic European cars, too, with the likes of Bugatti and Lagonda also pushed to their limits on the clay.

In addition to cars and motorcycles, bicycles were raced on the claypan and there was even an air race conducted from Perth to Perko.

After the most recent revival event in 2019, vintage car owners will once again take to the claypan this September for the Lake Perkolilli Red Dust Revival 2022. 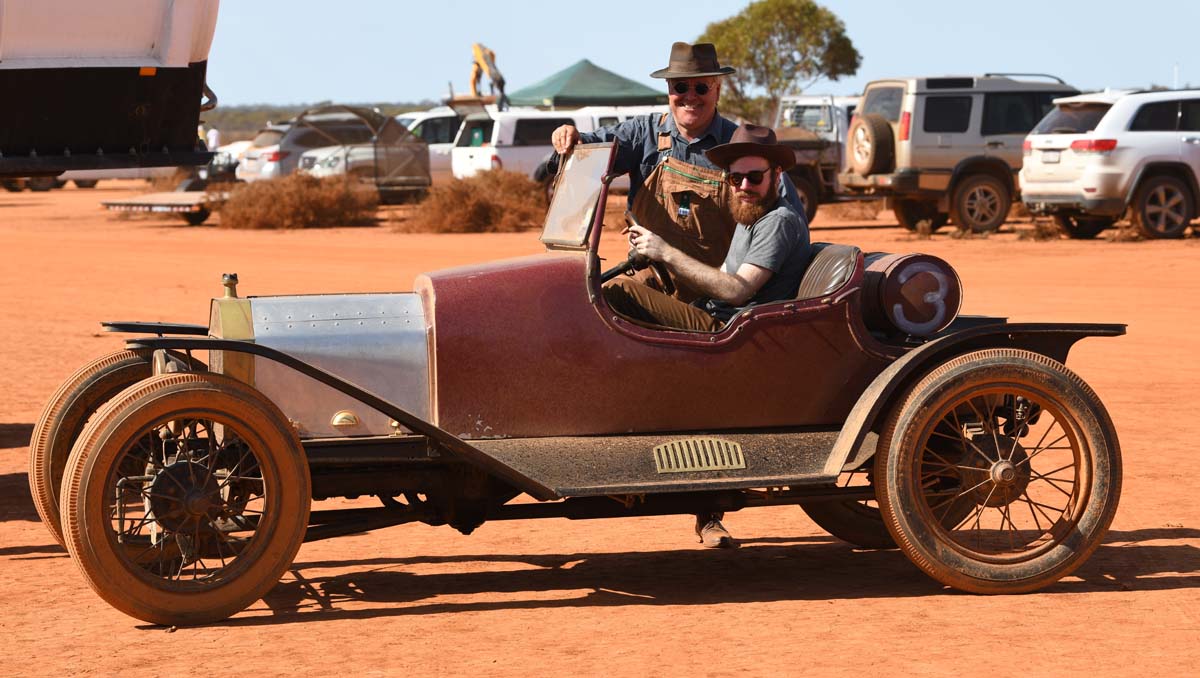 Organised by the Lake Perkolilli Motor Sports Club and scheduled for 19–25 September, this year’s Lake Perkolilli Red Dust Revival will see vintage racing cars and motorcycles kick up the red dust in front of thousands of cheering spectators as they re-enact the action and atmosphere of the past.

“Little did we know what a spectacle we had created back in 2019 when we last ran an event,” said Lake Perkolilli Motorsports Club President, Graeme Cocks.

“More than 100 entrants brought pre-war cars and motorcycles to Perkolilli from all over Australia and even the United Kingdom. They kicked up great clouds of dust as they roared around the 4.25km circuit. It made for a sensational visual event.” 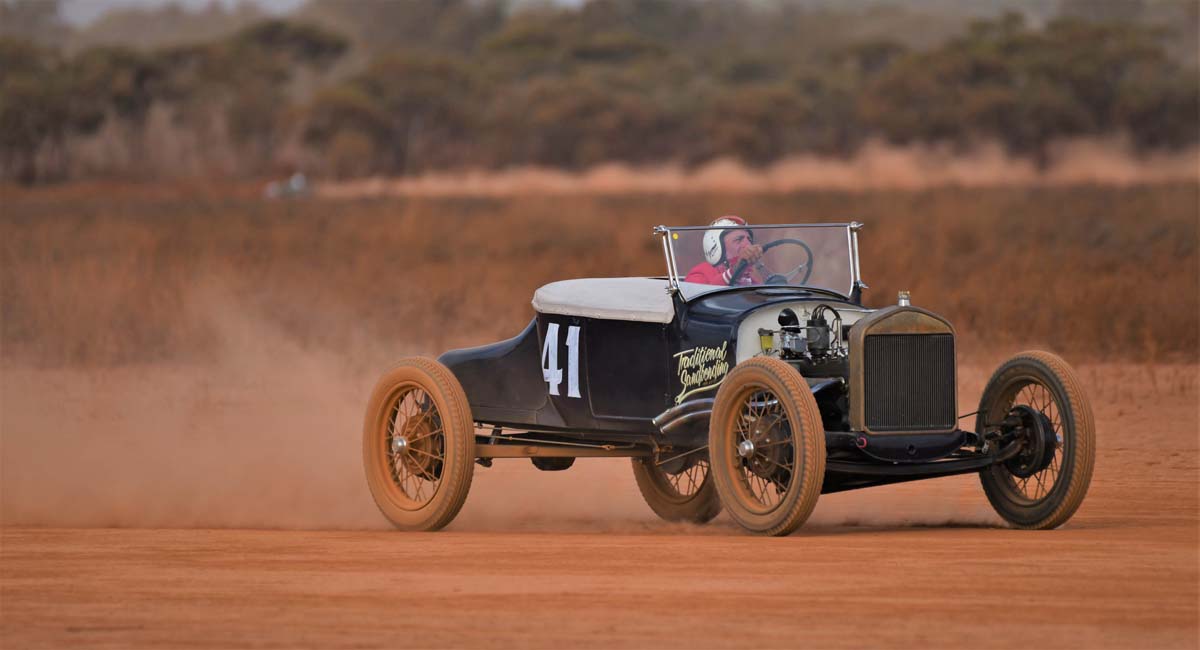 The aim of the Red Dust Revival is to capture the essence of early outback motor racing, which was rough and ready, but spectacular. Teams will spend a week camping at the claypan, just like they did a century ago.

Around 110 cars and 40 motorcycles are expected this year, with entries from all over Australia. Numbers for the car classes have been filled, but there were still a few places left in the motorcycle classes at time of writing.

“Since the 2019 event, many more people have been motivated to build or prepare cars, and yes, scouring the pages of JUST CARS to find the bones of a Perko racer,” Graeme added. 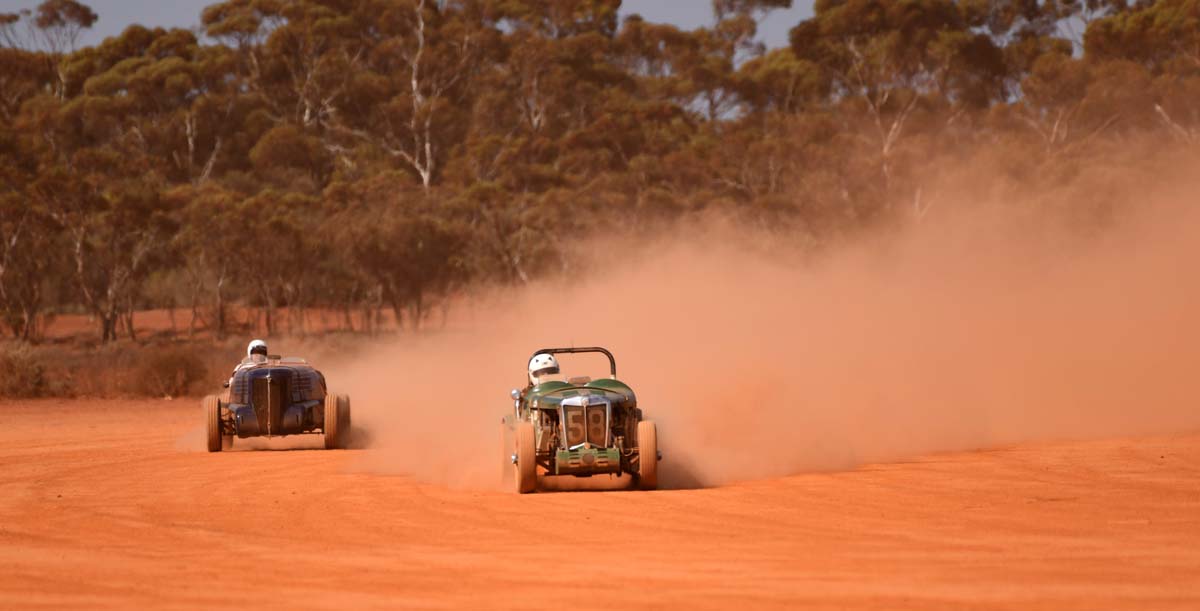 Eligible cars and motorcycles are limited to the 1914-1939 period, with chassis and drivetrain components from this era, too. Hot rods are not in the spirit of the event, nor are modern engines in classic chassis (see the event website for a more detailed explanation of vehicle eligibility).

A Red Dust Revival car is a Perko car forever, for one simple reason: the fine red dust is impossible to remove from every nook and cranny. It is a sign that the car has participated in one of the great events on the Australian motoring calendar.

For spectators, Kalgoorlie is the closest town with hotel/motel accommodation, but most people camp at the claypan. Bookings for campers and spectators can be made at TryBooking.com with competitor entry forms at motoringpast.com.au/red-dust-revival

All funds raised by the Lake Perkolilli Red Dust Revival 2022 will go to Variety, the Children’s Charity.

For more details, go to: motoringpast.com.au/red-dust-revival