For its third outing, the AXA Sydney Harbour Concours d’Elegance brought the best, rarest and most beautiful examples of haute automobilisme to the harbour city.

To co-opt Jaguar’s famous advertising line, the 2021 AXA Sydney Harbour Concours d’Elegance was an event with ‘grace, space and pace’. Grace could be applied to just about the entire Concours field. Space acknowledged the beautiful gardens of Sydney harbourside mansion, Swifts, where this year’s Concours was held, while Pace was perhaps best represented by McLaren’s stunning new Elva roadster, which made its Southern Hemisphere debut at the event. 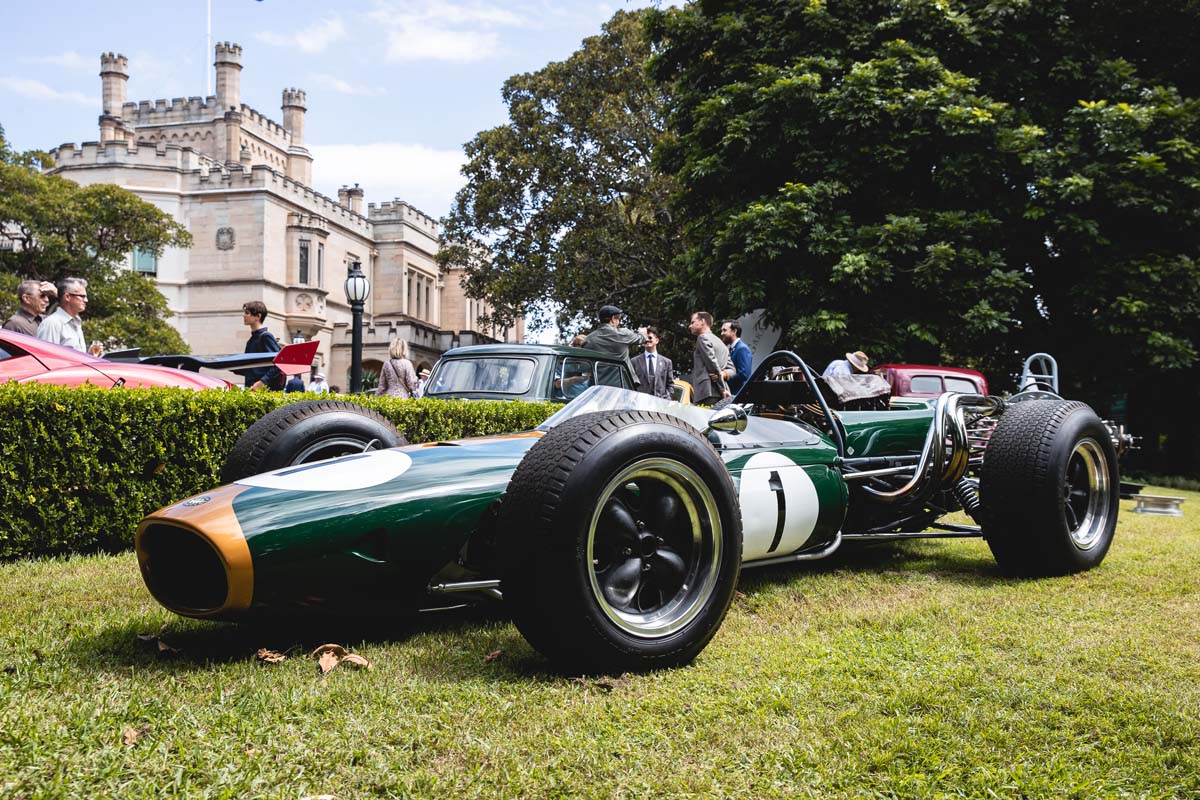 Jaguar’s slogan was particularly appropriate for this year’s Concours, as it celebrated the 60th Anniversary of the iconic E-Type. No less than nine examples were on display at the Concours, including a modern 'Eagle' reproduction and Lightweight replica – a fitting tribute to the iconic sports car’s 60th birthday.

This elite group also included an E-Type that I had previously owned, so when a parade of the E-Types was held around the main driveway of Swifts, I was delighted to get behind the wheel of my former car again.

As Swifts had proved to be the perfect venue for the second AXA Sydney Harbour Concours d’Elegance last year, it was the natural choice for the 2021 Concours, which was held from 4 to 6 March. 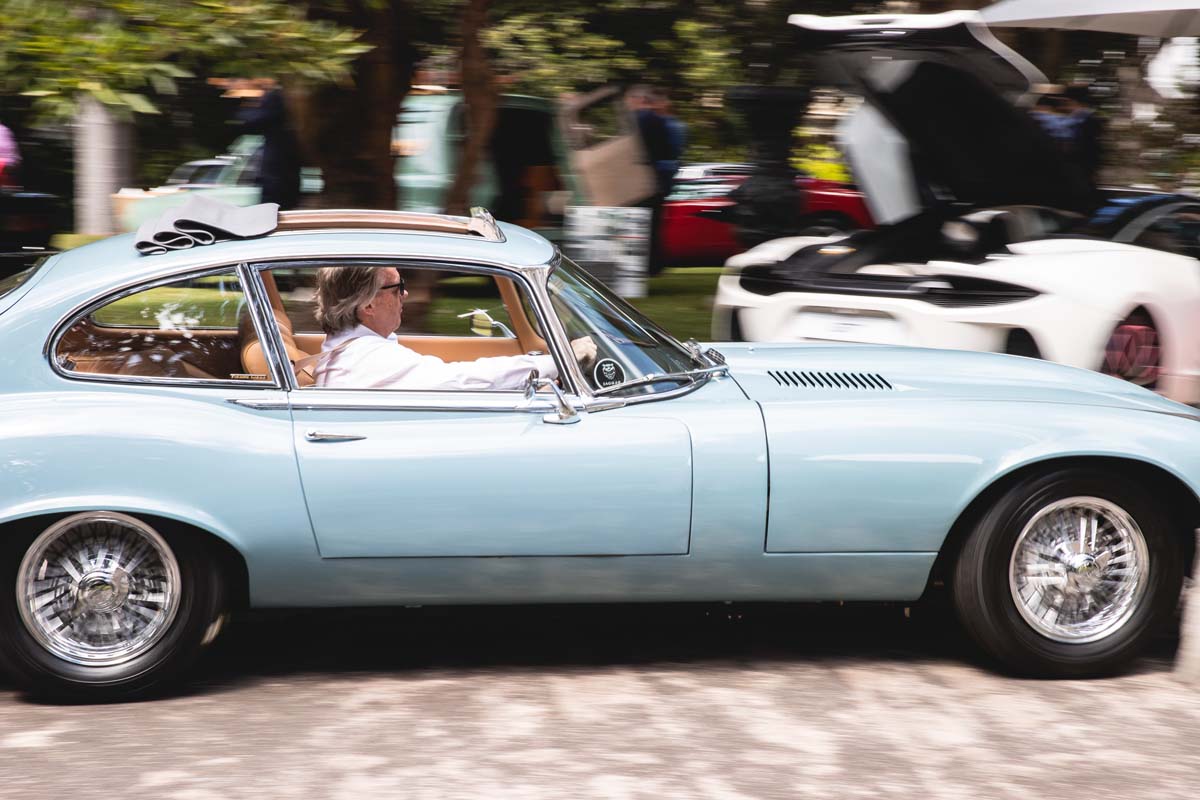 Built in stages from 1875 to 1882, Swifts was originally the home of brewing magnate and New South Wales politician, Sir Robert Lucas-Tooth. Back when architect G.A. Morrell was designing the house, the automobile was unheard of, but ample space was carved out underground to house the stables. In the 20th Century, these were repurposed for automobiles and remain a distinctive part of the property today.

Legend has it that, when Swifts was being designed, Lucas-Tooth instructed Morrell to ensure the ballroom was bigger than that in the NSW Governor General’s home! The grandeur of that ballroom was apparent to the handful of lucky guests invited there by title sponsor AXA for a luncheon on the second day of the event.

Aside from its wonderful Gothic Revival castellated facade, the appeal of Swifts lay in its abundant grounds, where this year’s 33 invited concours entrants and related special interest vehicles were displayed and admired. 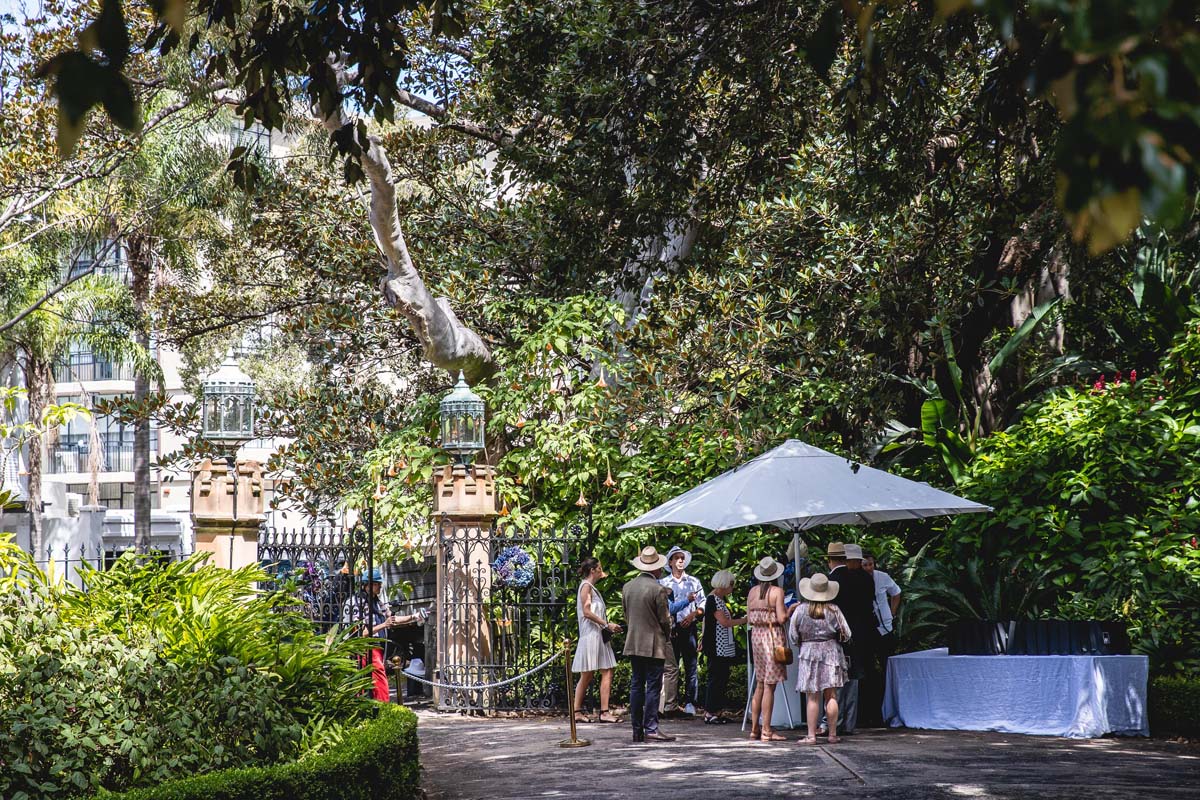 While the three-day format for the AXA Sydney Harbour Concours d’Elegance has now been established, there were new elements and attractions that debuted this year, starting with the Distinguished Gentleman’s Drive. 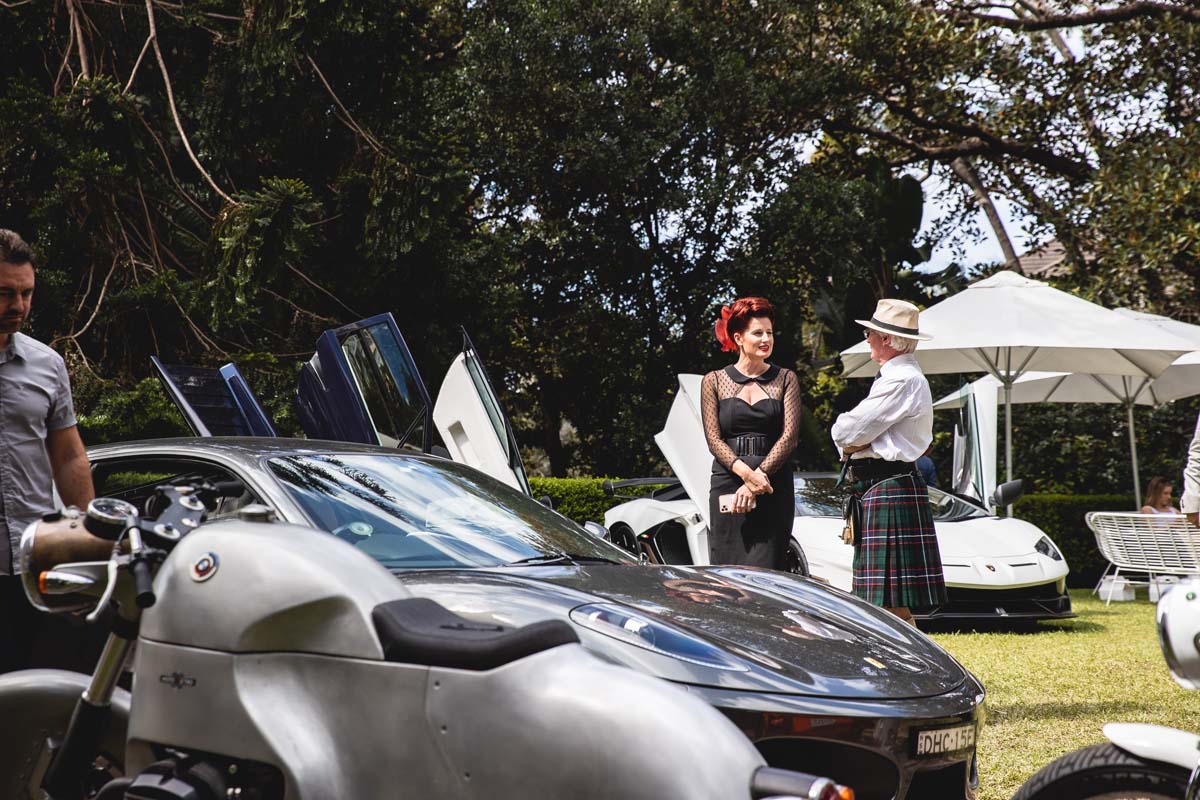 Creator of the Distinguished Gentleman’s Ride, Mark Hawwa, helped organise this event and supplied a selection of customised classic motorcycles to add some frisson to the concours display, too.

This year also saw the life and achievements of Sir Jack Brabham acknowledged with a special Concours class devoted to the great Australian, which dovetailed nicely with the return of Brabham as one the modern prestige marques on display.

The representation of modern premium vehicles was boosted this year, too, with McLaren, Lamborghini, Maserati, Rodin and Rolls-Royce all presenting their latest machinery to an enthusiastic audience.

When last year’s AXA Sydney Harbour Concours d’Elegance was held, the global impact of COVID-19 could hardly be imagined. Fortunately, Australia has managed to avoid the worst of it, but we’ve still been affected, and its impact on this year’s Concours meant that a number of overseas guests were unable to attend. 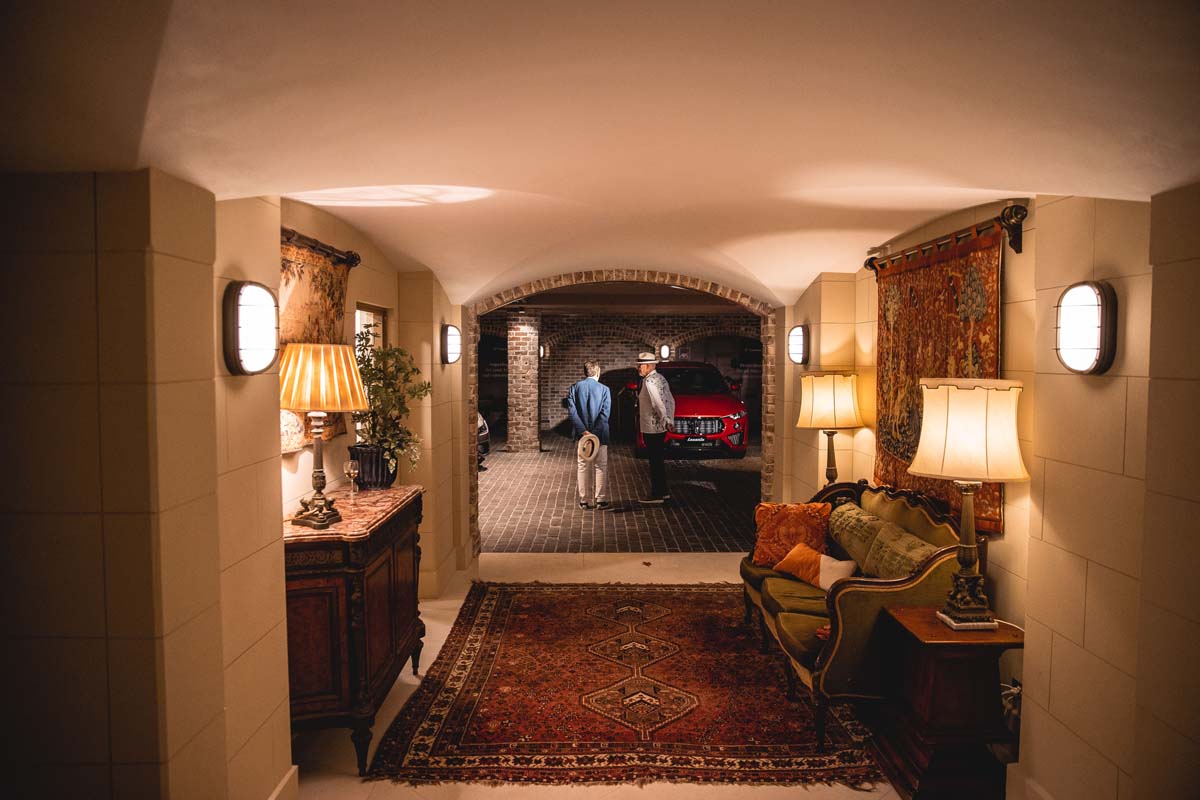 Among these were Andrew Bagley, last year’s Chief Judge. In his absence, the experienced John Virgo took on the Chief Judge role, ably assisted by Sam Movizio and the returning Jacquie Hayes (aka Madam Wheels). Making her judging debut on the Concours field was Marijana ‘Mars’ Marsanic, the stylist and fashion guru behind EveryBODYknowsMARS.

In addition, there was also the Preservation Award presented by Chatêau La Gordonne, Women’s Choice and People’s Choice Awards, both selected by public ballot, and the peer-voted Prix d’Honneur for the Best in Show. 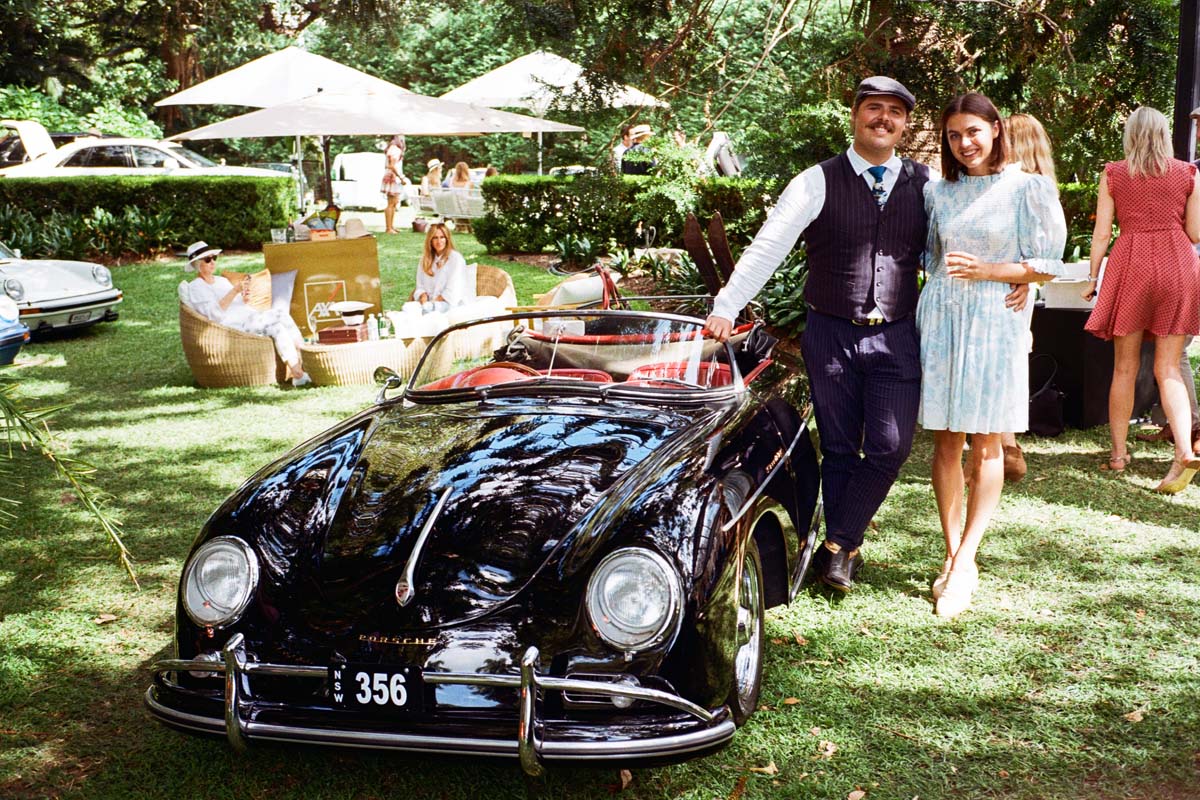 The E-Types entered in Happy Birthday covered almost the entire spread of production, with a 1962 and 1974 model in contention amongst roadster, fixed head coupe and 2+2 variants.

Entrants in It’s a Family Affair covered an even greater spread of Porsche production, from a 1958 356 Speedster to a rare 1986 928S cabriolet with a Jurinek body conversion. 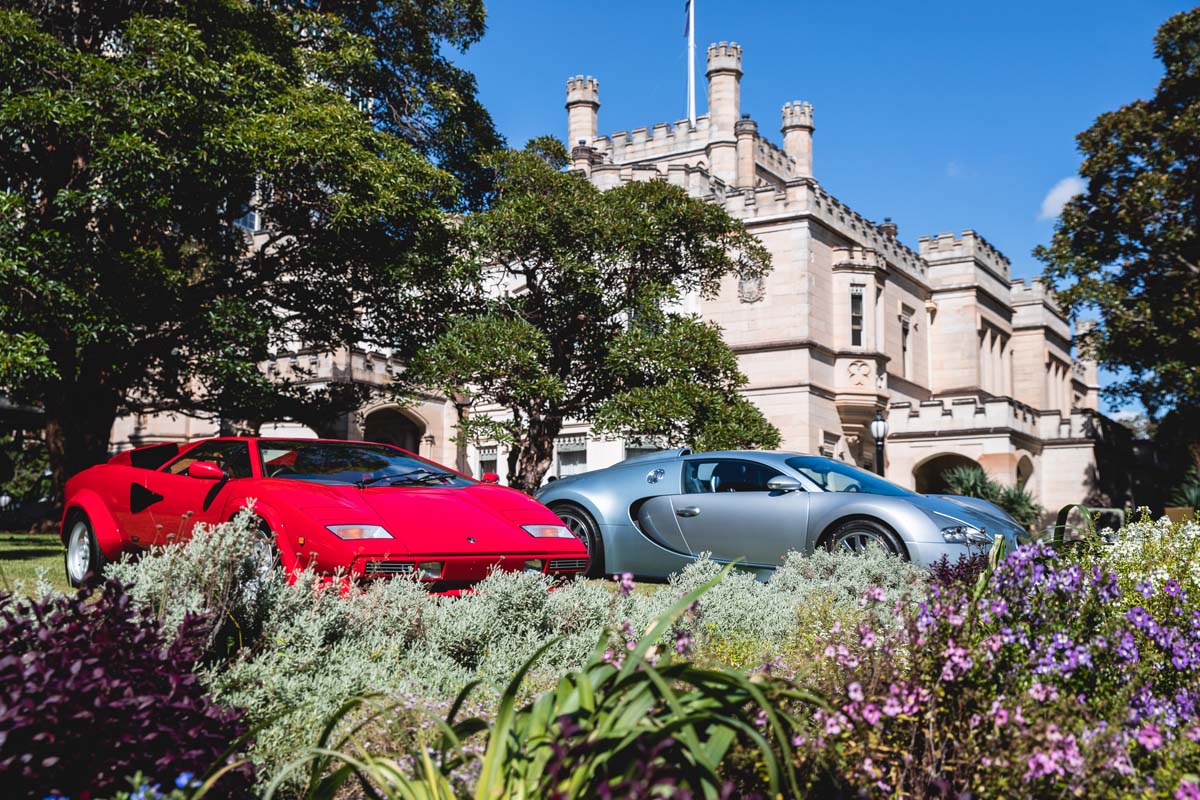 With a Mazda Cosmo Sport, Ferrari Dino 246 GT (in rare RHD and violet paint) and Ford Thunderbird, Fun, Fun, Fun was represented by cars from around the globe, with an additional note being the 1961 Maserati 3500 GT Vignale Spyder in this class would to be auctioned at the Concours. 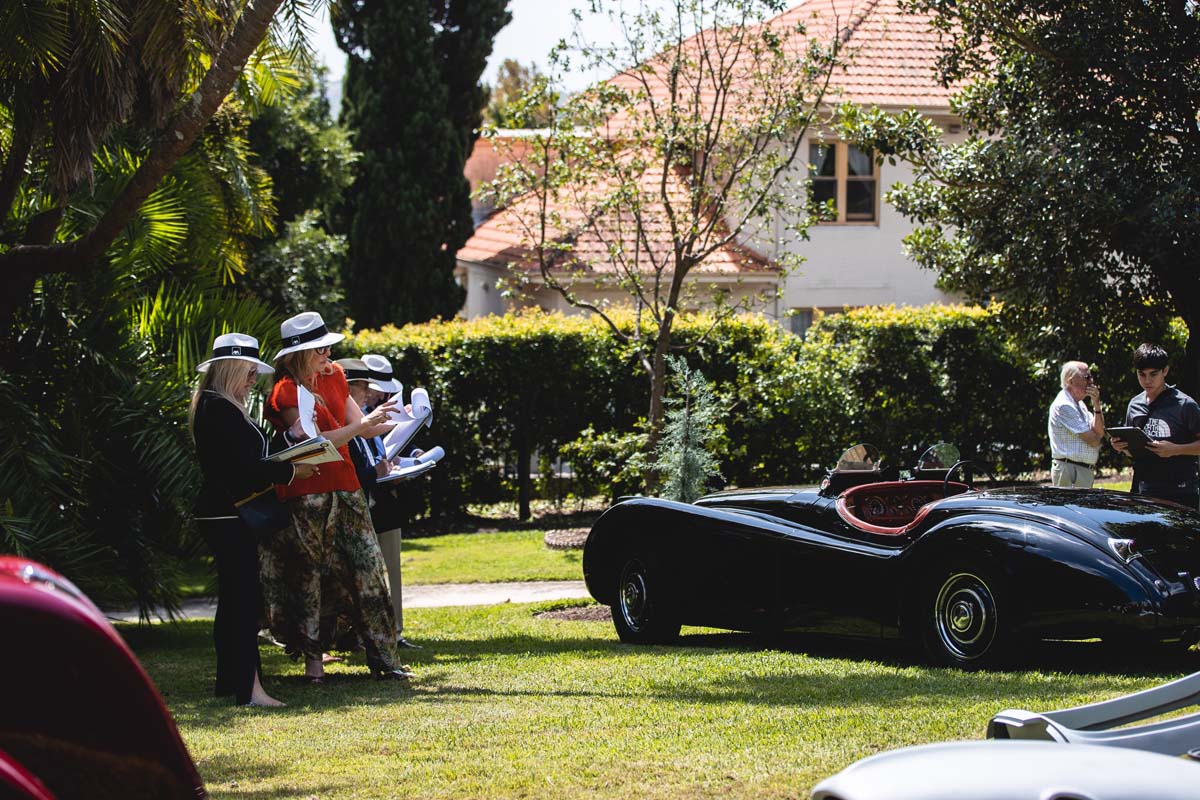 Poster Children, as you might expect, included a Mercedes-Benz 300SL roadster, Bugatti Veyron and Lamborghini Countach, while Black Jack presented a Jaguar XK120 of the type in which the three-time World Champion achieved success, a 2020 Brabham BT62R and the BT19 from 1966 in which Brabham became the only person to win the F1 World Championship in a car of his own construction. 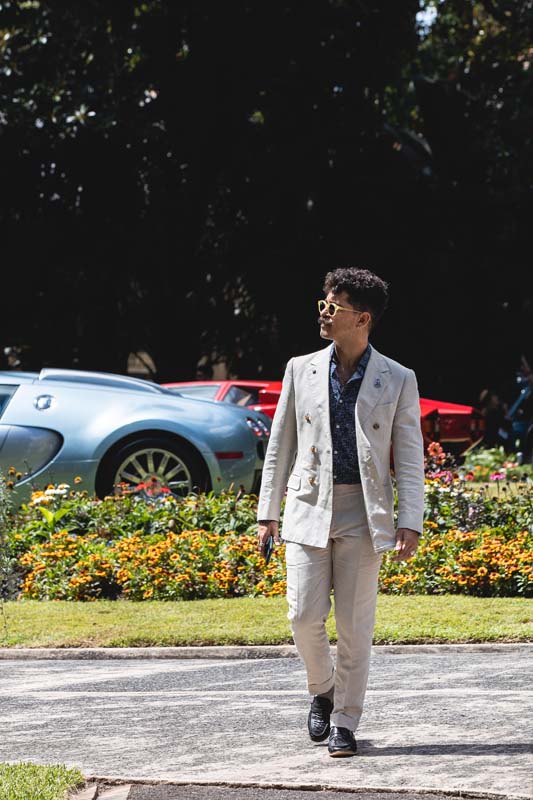 Following the launch of the McLaren Elva roadster (in standout Gulf livery) to an invitation-only crowd on Thursday, 4 March, the main concours day on Friday, 5 March, welcomed 300 guests to admire the haute automobilisme on display. As the judges worked through the field, guests imbibed Pommery champagne and indulged in treats from Hyde Hacienda Bar + Lounge, all in a relaxed, garden party environment, accompanied by live music and perfect late Summer weather. 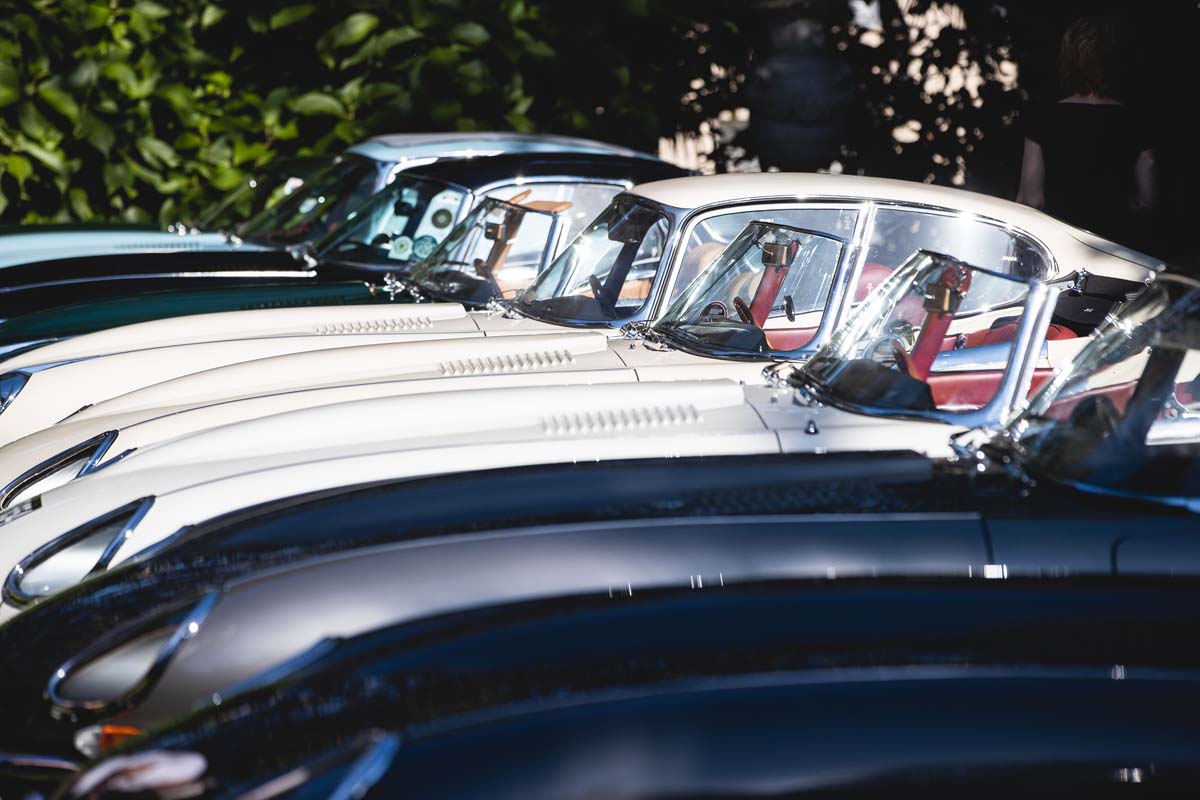 Beyond the captivating Concours entrants, there were other automotive delights to enjoy, too, including a 2000 Jaguar XKR and 1960 Rolls-Royce Silver Cloud from sponsor Paradise Garage.

The day’s activities were rounded out with the auction of the 1961 Maserati 3500GT Vignale Spyder on the grounds at Swifts, with this lovely example selling for $733,225.

On Saturday evening, the 2021 AXA Sydney Harbour Concours d’Elegance wrapped up in fine style with the Pommery black-tie Gala Awards Dinner at the National Maritime Museum, where the Concours winners were announced.

The following cars were this year’s victors:- 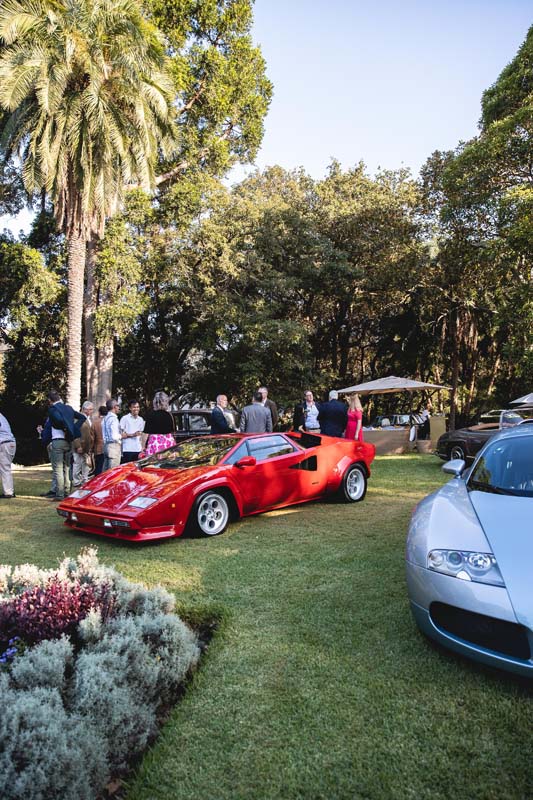 With the 2021 AXA Sydney Harbour Concours d’Elegance completed, attention turns to next year’s fourth edition, which already has a date locked in – 3–5 March, 2022 – with Swifts to once again play host.

To keep up to date on Concours developments for 2022, go to: sydneyharbourconcours.com.au 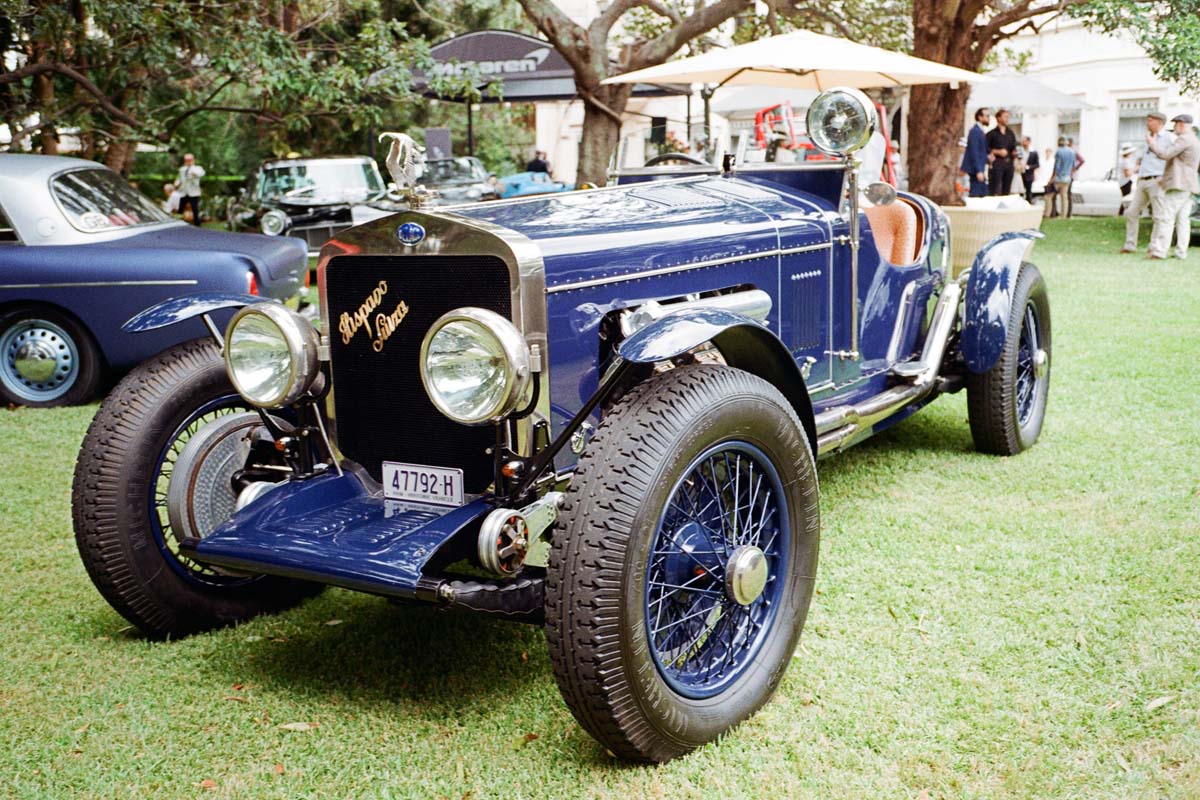 With the Prix d’Honneur being a peer-judged award, there were numerous contenders in play, from untouched survivors to pin-sharp restorations, but all agreed that the 1936 Delage D6-70 with reproduction Figoni et Falaschi coachwork had the best story behind it.

In the late 1930s, Parisian coachbuilders Figoni et Falaschi bodied a handful of Delage and Delahaye automobiles, starting with this car.

Its first owner, Louis Gerard, gave Figoni et Falaschi the seemingly contradictory objectives of creating a car that could be a Concours winner and 24 Hours of LeMans champion.

The resulting bodywork, shaped in aluminium and fitted to a Delage 3-litre six-cylinder chassis, was a masterpiece of Art Deco streamlined styling, with tightly-wrapped front wheels and spats on the rear to increase the car’s ability to cut through the air. The teardrop body was equally sleek but barely had room for two inside, necessitating features like a Cotal electric pre-selector 4-speed gearbox with its tiny shift lever.

Completed in time for Gerard to win the Deauville concours in 1936, cancellation of that year’s Le Mans 24 Hour race due to industrial action meant he would have to wait a year to achieve his second aim. At the 1937 Le Mans 24 Hour, Gerard won the 3-litre class and finished fourth overall. He would return to Le Mans in the same car in 1938. 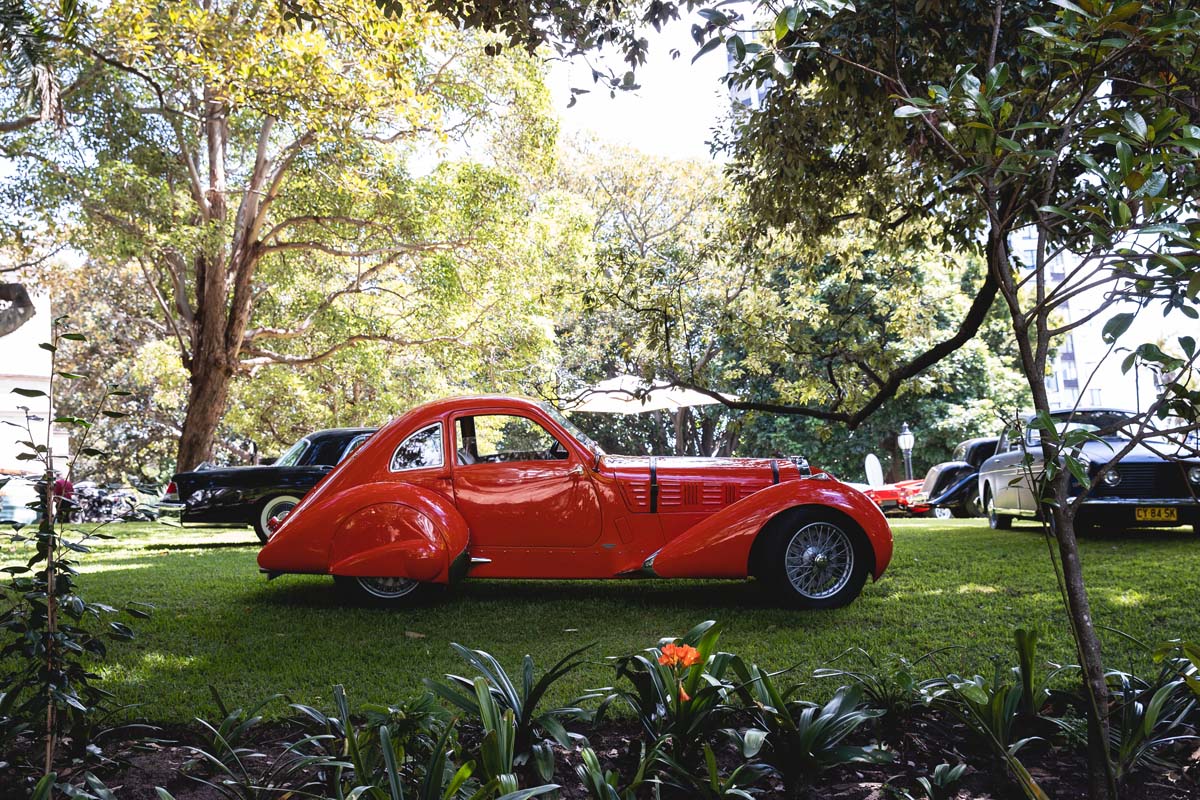 Gerard’s unique Delage was lost during World War II, but enough information and imagery existed to allow Australian Bruce Thomas to attempt a recreation in 2002, based on a 1936 Delage D6-70 Autobineaux coupe found in the USA.

Finished in burgundy, the D6-70’s next owner had it repainted in an orange hue authentic to Gerard’s original colour, with some bodywork inaccuracies corrected at the same time.

Since then, the Delage has been invited to appear at Motorclassica on two occasions and remains a tribute to Art Deco extravagance.

Remarkably, this car was driven from Melbourne to Sydney for the Concours.