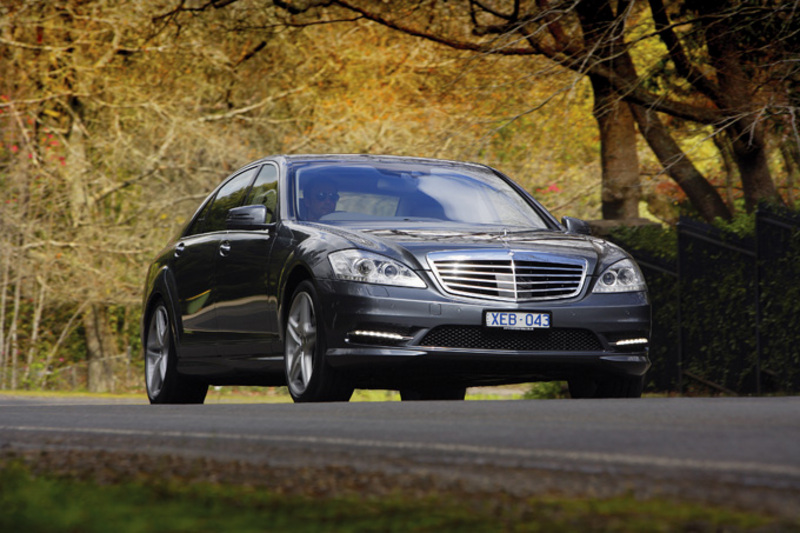 It's been nearly 60 years since the Mercedes-Benz 220 first established the S-class lineage and it may surprise but in all that time, just nine generations have been produced. Over the years since the 1951 launch of the S-class pioneering 220 model, the three pointed star's flagship has accounted for around 3.3 million sales - pretty impressive for a car at the top end of the market.

The just released ninth generation line-up gives Australian buyers the choice of six engines - a V6 turbo-diesel and five petrol powerplants with six, eight or 12 cylinders. New engine technology and Benz's superb seven speed automatic transmission have combined to cut both fuel consumption and CO2 emissions by up to seven percent on some models. The V6 petrol and diesel engines and the petrol V8 use the seven speeder while the V12s with their massive amounts of torque use a five speeder.

The new S-class pricing regime has seen the entry level S350's price tag leap by $13,090 and other price increases ranging from $5,500 for the S65 AMG to $15,900 for the S500L. To counter this, Mercedes-Benz Australia executives are quick to point out that while there have been across the board price rises, the additional standard goodies amount to about 15 percent of extra value - nearly double the price rise percentage.

The increased value of the additional goodies - exclusive of the facelift upgrades - ranges from $10,000 for the S63 AMG to a hefty $18,000 for the S350L. Despite its $500 price rise, there is no extra value equipment on the S65 AMG. In all there are now eight S-class models from which the well heeled Australian motorist can choose and the big news is the great new S350 CDI turbo-diesel that is fitted with Benz's so called Blue Efficiency package.

In terms of subtle S-class facelift items, there are new look grilles, a redesigned rear bumper and LED lights for both front and rear. In fact each of the new look tail lights uses no fewer than 57 LEDs. Close inspection on the inside reveals more sumptuous and more comfortable seats, new trim and materials, a new look steering wheel, better functioning for the seat belts, three ambient lighting colours (two more than the outgoing model) and a sexier media/entertainment system.

One really clever innovation is that the dashboard mounted centre screen uses "split-view" technology that allows the driver and front seat passenger to see two different images. For instance, while driving along, the passenger can watch TV or a DVD while the driver sees a map. Other new standard goodies for the S350 entry level model include Bluetooth mobile phone connectivity, a USB and SD card interface, remote boot opening and keyless entry and "go."

Another new standard addition on all models is automatic radar controlled cruise control with its "pre-safe" accident avoiding braking system. There's no doubting that Benz engines are among the world's finest and for new S-class buyers, there is plenty of choice. The V6 petrol engine that powers the S350 is a 3.5-litre unit that produces 200kW at 6400rpm and 350Nm of torque that is on tap from 2400 to 5000rpm. While the engine is a delight in less weighty Benz models, it seems to be working a bit hard in the big S-class.

Mercedes claims a sprint time to 100km/h of 7.3 seconds, a top speed of 210km/h, a combined fuel consumption figure of 9.8-litres/100km and a CO2 emissions figure of 234g/km. While the S500's V8 continues to be a seriously impressive engine, probably the pick of the power plants is the new three-litre Blue Efficiency V6 turbo-diesel that has been slipped under the bonnet of the S350 CDI. The engine is good for 173kW of power at 3600rpm and 540Nm of torque that kicks in at a lazy 1600rpm and hangs around till 2400rpm.

For a diesel of this size powering a car with S-class dimensions, a sprint time to 100km/h of 7.8 seconds is pretty respectable, as is a 7.7-litre combined fuel consumption figure and a 202g/km emissions rating. This car deserves to do more S-class sales than the initial 10 percent Mercedes executives are predicting, and this will probably be the case once its reputation grows and bowser prices rise. The super smooth 5.5-litre V8 engine found in the S500 churns out 285kW of power at 600rpm and 530Nm of torque between 2800 and 4800rpm. The car can sprint to 100km/h in 5.4 seconds and rocket on to a governed top speed of 250km/h.

Spend nearly half a million dollars on the S65 AMG and you can look forward to the amazing six-litre twin-turbo V12 with its 450kW of peak power at 4800rpm and a monumental 1000Nm of torque that is on tap between 2000 and 4000rpm. This car makes it to 100km/h in a blistering 4.4 seconds and its fuel figure is 14.5-litres/100km. The new S-class models boast a dazzling array of technological goodies and included are cornering lights, adaptive front airbags, a driver's knee airbag, the drowsiness sensing attention assist function, bi-xenon headlights, Bluetooth interface, the Benz COMAND APS navigation and entertainment system, direct steer, electronic stability program, automatic climate control and the so called Linguatronic voice control that operates the sound system, the satellite navigation and the telephone.

Behind the wheel of the new S-class - at least the S350 and S350 CDI and the S500 that were on the media launch drive program - you can't help but be impressed by the quality and motoring refinement the cars exhibit. The seats are now more comfortable and the cars waft their occupants along in an effortless (slightly less so in the V6 petrol) manner - just what you'd expect in a flagship Benz. Quality fit and finish is everywhere, and along with the sumptuous leather trim, there is enough wood trim to add even more class.

Interestingly while there is the often used burr walnut on some versions, good old eucalyptus is the wood of choice for the S350 and it looks superb. Speaking of wood, I continue to detest those shiny wood rimmed steering wheels that have a tiny amount of leather - usually where your hands don't go. Lexus is guilty of this and so is Benz with S-class models other than the entry level S350 that has a leather wrapped wheel. The shiny wood is unpleasantly hot after the car has been sitting in the sun for a while, and it is equally unpleasantly cold on a winter's day. Sweaty, slippery hands on a steering wheel are something I just do not like.

Pushed hard through corners the three models we sampled on the launch all confirmed how well sorted the S-class suspension package is. The cars sit nice and flat and point exactly where you want them to go. Having steering wheel mounted paddles for the seven speed automatic adds to the driving fun. In recent months, since the launch of the latest edition BMW 7-series with its excellent new 730d turbo-diesel version, the big Beamer has out pointed the S-class in category sales. The people at Mercedes Australia are confident the new S-class will reverse the trend and see the new Benz again assume segment leadership. Not surprisingly the S350 is expected to be the biggest seller, with 80 percent being the V6 petrol and 20 percent the turbo-diesel powered CDI version.

New safety features
Night View Assist Plus; with an infrared camera, it is now equipped with a pedestrian detection function Lane Keeping Assist: The camera on the inside windscreen is able to recognise clear lane markings and causes vibrations in the steering wheel when the driver strays out of the lane.
Brake Assist Plus & Distronic Plus: Radar based system can intervene and brake the car independently, if driver fails to recognise danger of a rear end collision.
Active Body Control: A modified Active Body Control system features crosswind stabilisation, which varies the wheel load distribution depending on the intensity of the crosswind.
Cornering lights: Provides more safety on junctions and when driving around bends.
Active multi-contour seats: Depending on the steering angle, lateral acceleration and speed, the inflation pressure and volume of the air chambers in the side bolsters of the seat backrests are varied to give better lateral support.
Attention Assist: This system warns the driver when it detects signs of drowsiness.
Distronic Plus: This radar based proximity control system automatically helps the driver to maintain a set distance from the vehicle ahead. It can bring the car to a stand-still if necessary.
Kneebag: An additional airbag is able to reduce the loads acting on the driver in a frontal collision.
Neck-Pro Assist: Crash responsive head restraints reduce the risk of a whiplash injury.
7G-Tronic 7-speed automatic transmission: Standard unit installed in all V6 and V8variants. 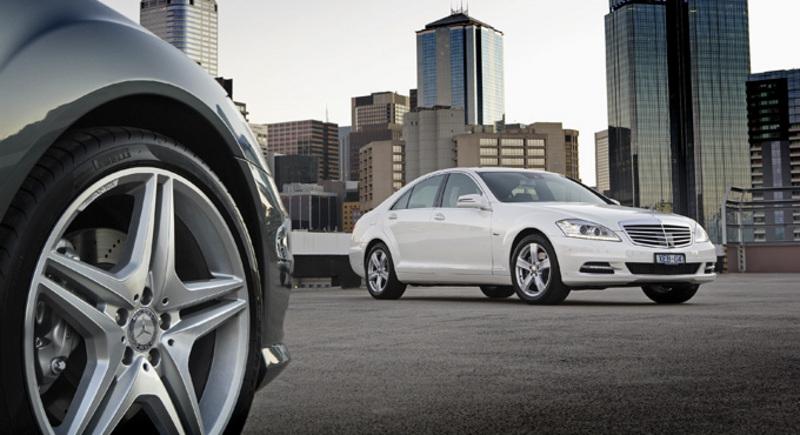 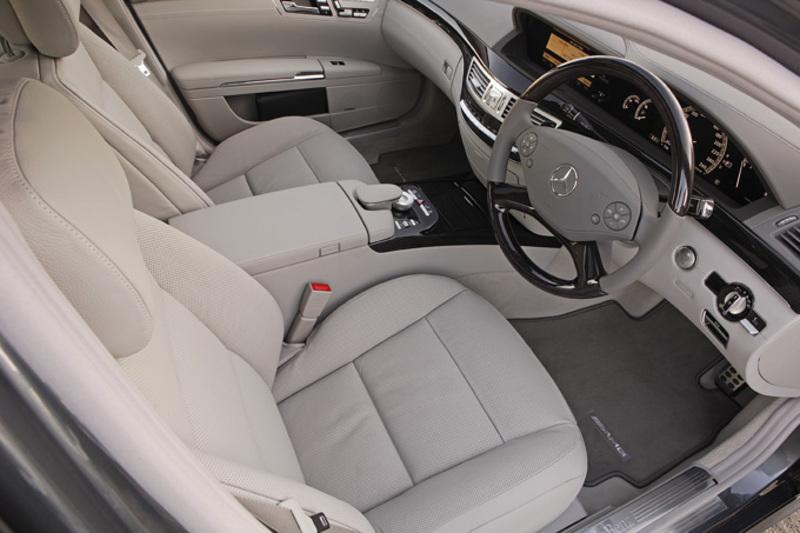 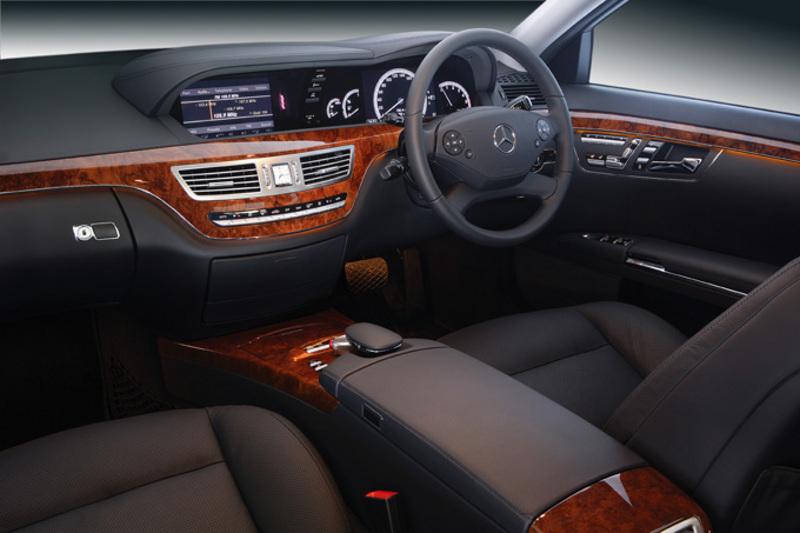 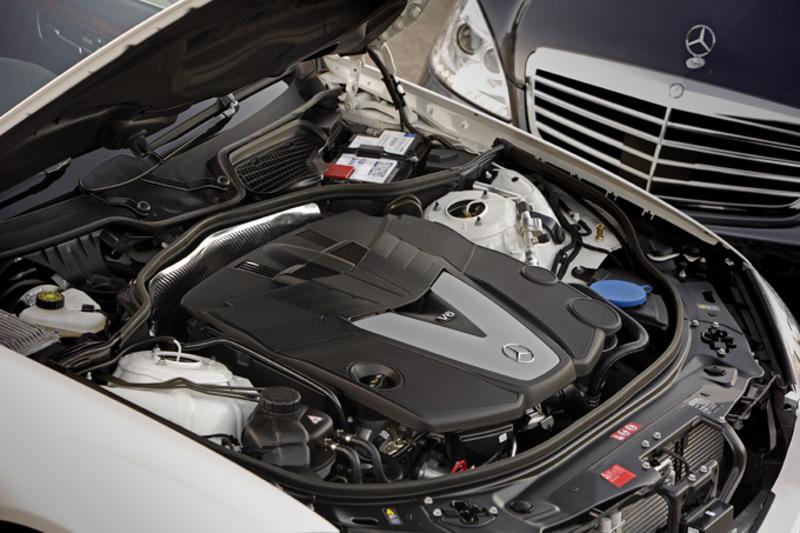 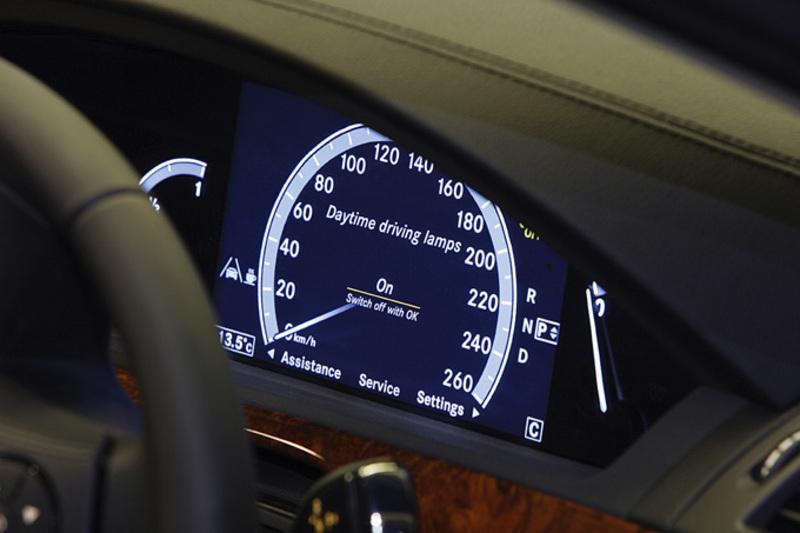 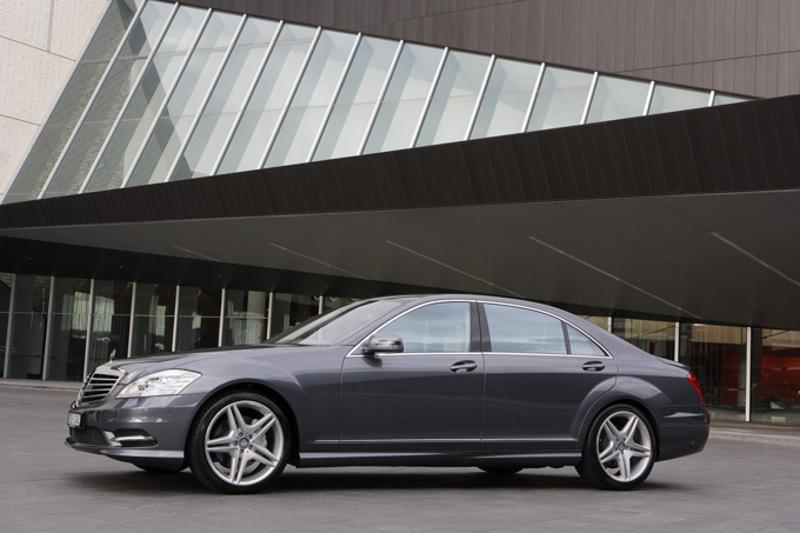 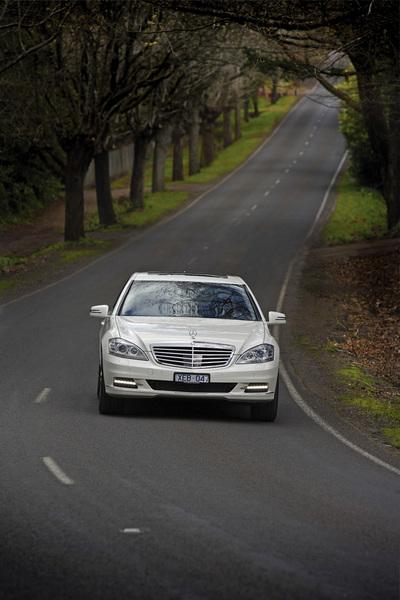 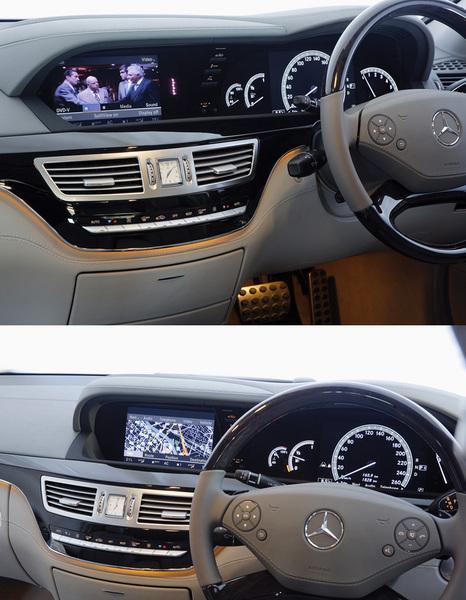 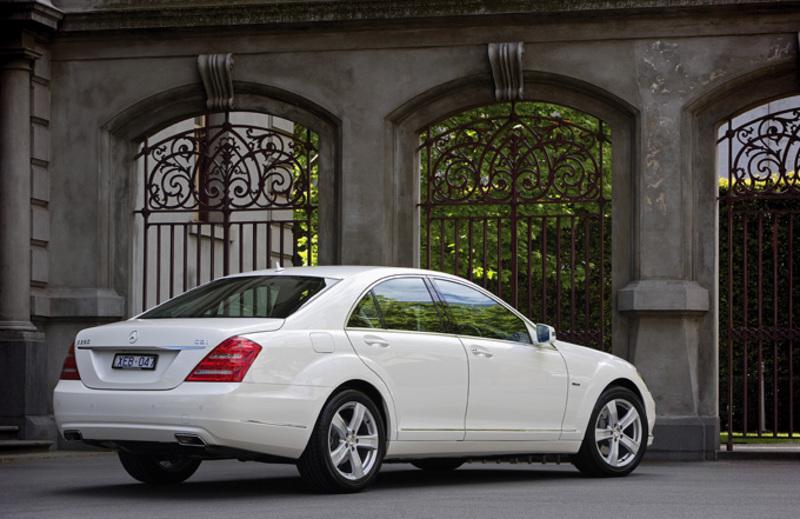