Following the success of their first ever online auction in June, SEVEN82MOTORS have lined up another, with a great spread of American and Aussie classic, muscle and custom rides consigned. 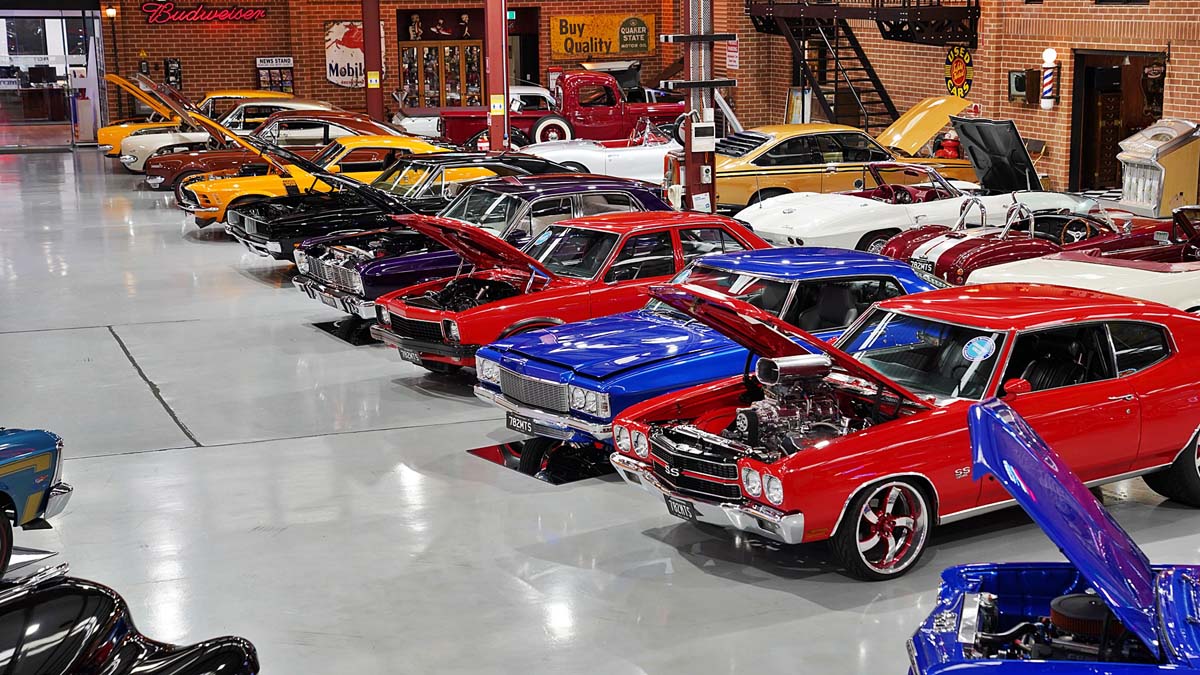 In creating the 782 Auction Platform, SEVEN82MOTORS have taken their popular monthly stock drops online, allowing enthusiasts far and wide to add a quality collectable vehicle to their garage without leaving the comfort of their armchair.

Ben Atkinson, Dealer Principal at SEVEN82MOTORS, says the success of their first online auction made it an easy decision to hold a second one.

“Obviously, I was nervous going into it, but we got some really good prices that went well above our expectations – and our seller’s expectations.” 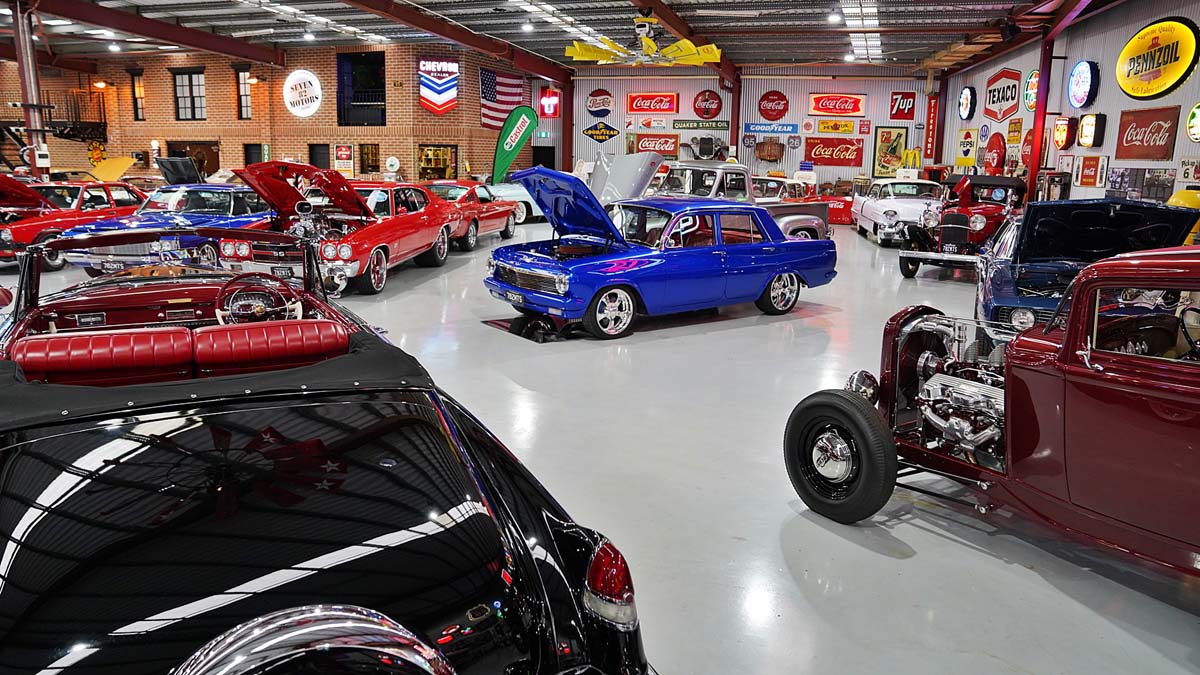 Of the 38 vehicles in the debut auction, 21 sold within the bidding period, with a further nine sold by negotiation soon after for 30 sales in total. That’s an outstanding clearance rate of 79 per cent for a first-time auction.

Most vehicles sold within their reserves, while some went above and beyond pre-auction estimates. The star of the show was a 1955 Ford F100 custom that sold for $206,000 – well above its reserve.

Obviously, given that initial success, there hasn’t been too much to tweak for the second auction. 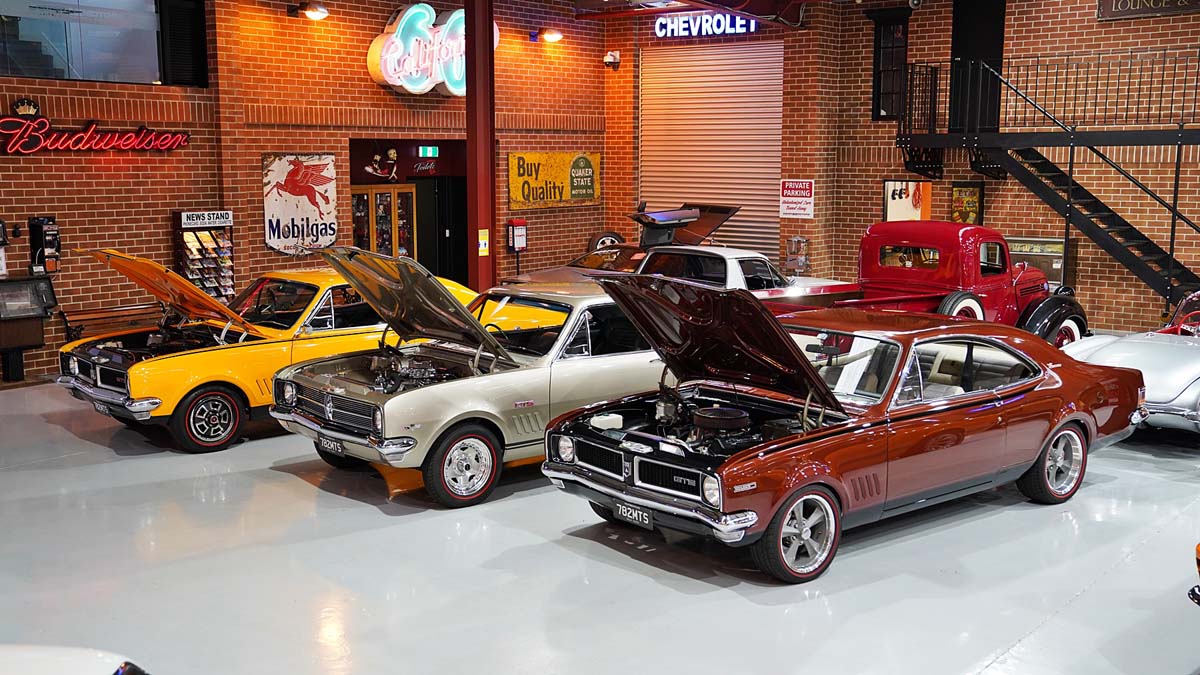 One thing that has changed is that this new auction will be shorter at 7 days, compared to 10 days for the first auction. Bidding opened from 7:00PM on 12 July and closes at staggered times from 7:00PM on 19 July.

“I’m not changing the auction format, though,” Ben clarified. “We’ve still got the ‘delayed time’ at the end where the last bid adds 10 minutes.”

Of the 34 vehicles consigned for this auction, there’s a raft of new listings and all reflect the quality you’d expect from SEVEN82MOTORS (see below for selected highlights). Consignments cover a spread of price ranges, so there are cars to suit different budgets, as well as different tastes. 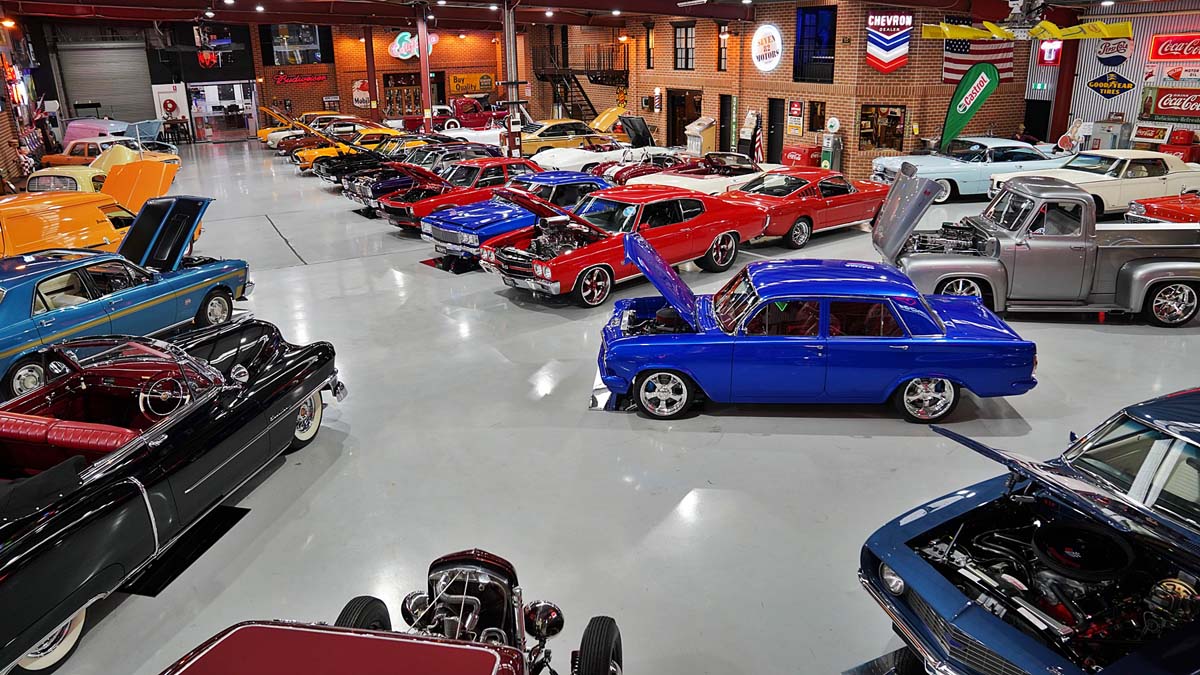 SEVEN82MOTORS carefully select the vehicles they offer, and while the initial auction had a range of high-profile Aussie classics, there’s more of an American slant to this time around, including Pontiac and Plymouth muscle, Mustangs, pickups and classic Chevys.

The SEVEN82MOTORS Nerang facility (2 Palings Crt) will be open for vehicle inspections on the following days.

Of the 34 consignments listed on the 782 Auction Platform, here are a few of the highlights:- 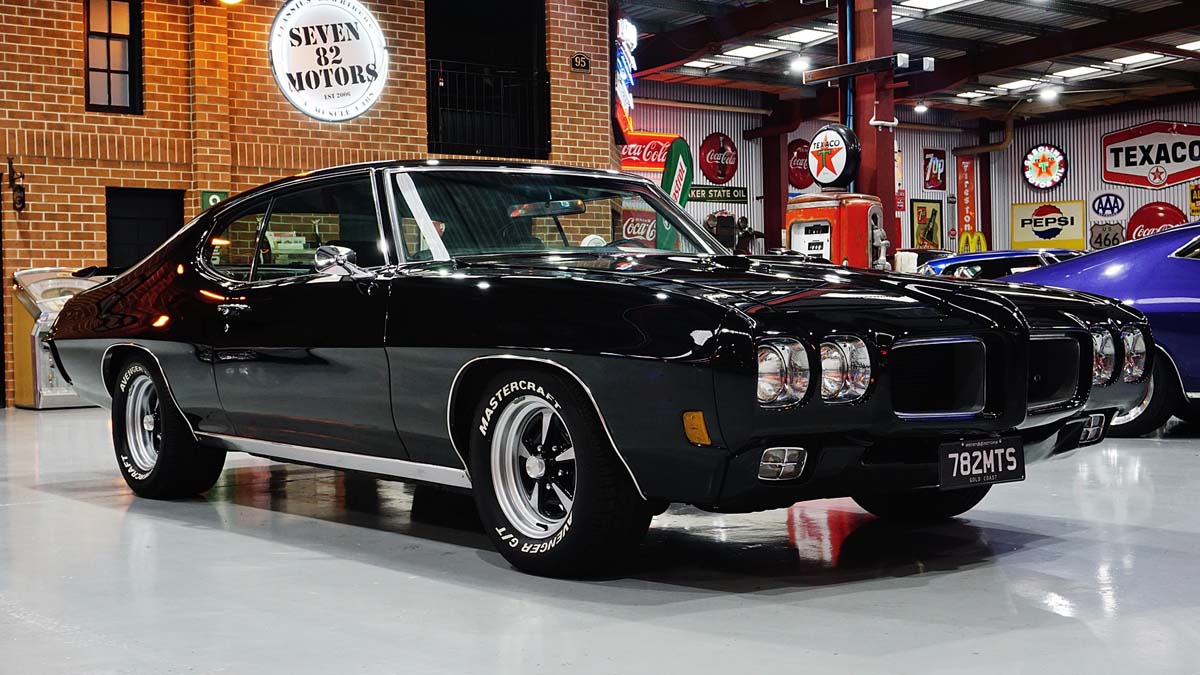 Already a rare car, being a factory triple black unit (black paint, top and interior) with the optional 4-speed manual, what makes this GTO additionally rare is the 428ci V8 that wasn’t a factory option but was available through selected Pontiac dealers, most notably Royal Pontiac in Michigan.

While unconfirmed, this may have been such a car – shipped with an empty engine bay to the dealer, where the 428 was fitted.

Sourced out of Texas by the current owner, this GTO was stripped and repainted in 2012, with new glass fitted, but the interior remains original. Recent new parts include springs, shocks, exhaust and wider Rally wheels. Currently on full WA registration. 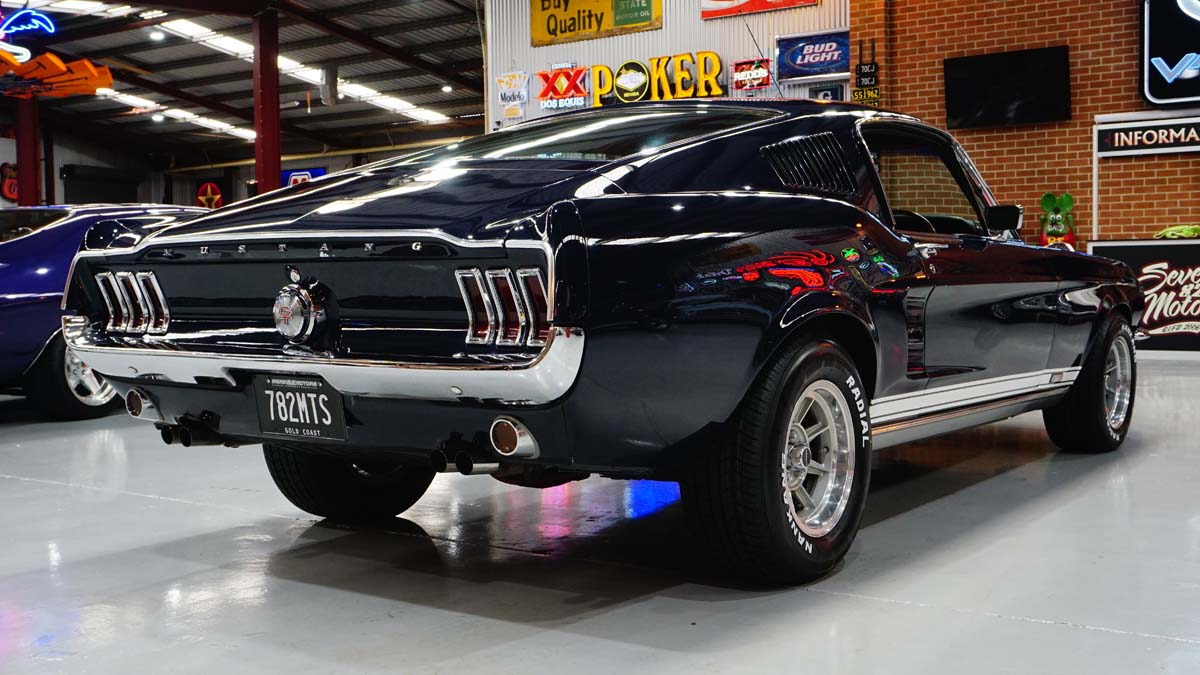 S-Code, RHD, Australian car from new. 390 V8, 3-speed auto.
This San Jose-built Mustang fastback was purchased by an Australian dealer when new in ’67 and RHD converted locally, so it’s spent virtually all its life here.

Being an S-Code car, it’s powered by the 390ci V8 and being a GTA means it’s built to GT spec with an automatic transmission. This car is also fully-loaded, being fitted with the Interior Décor Group, power steering, central/overhead consoles and air conditioning at the factory, as well as the GT Equipment Group that included foglamps, power front disc brakes, heavy-duty suspension, dual exhaust and wide-oval tyres.

The current owner of 31 years had it fully restored in the last 10 years, including a rebuilt 390 V8, R&P steering upgrade and new interior trim. Less than 500km travelled since completion. 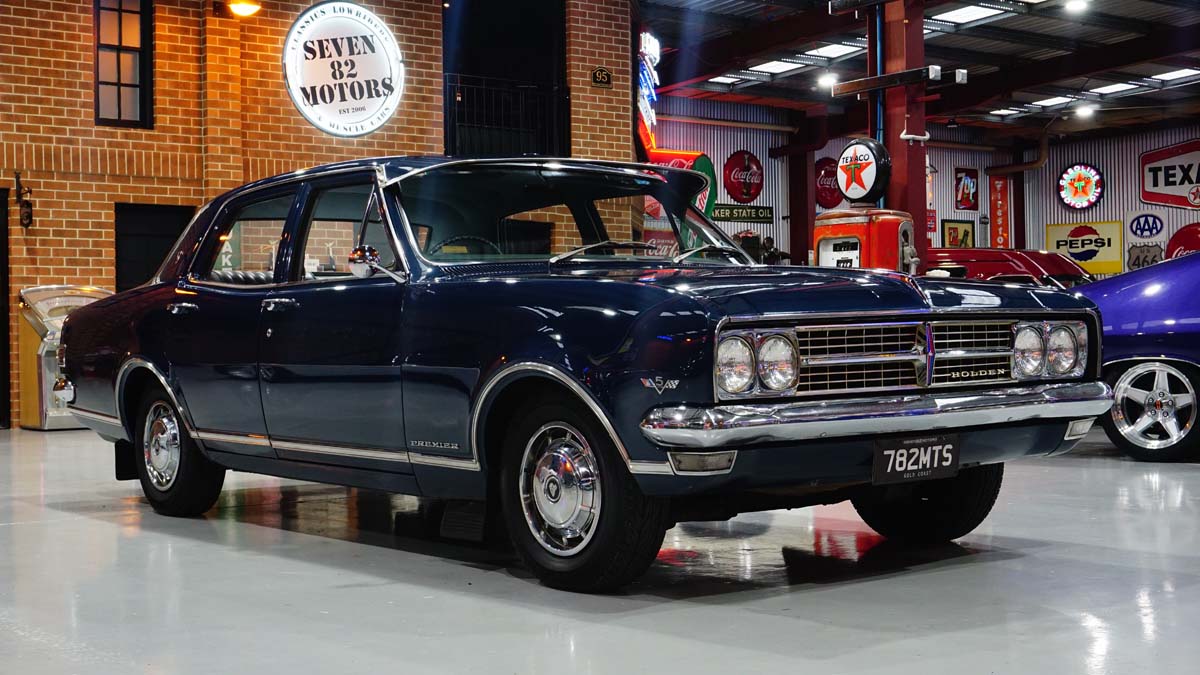 Ordered with a 307 V8, Powerglide automatic, bucket seats, a short console and LSD by its first owner, this Premier has had only two other owners since, spending most of its life in rural NSW.

While it did receive a closed door respray in its factory Paragon Blue paint approximately 15 years ago, no other restoration work has been done, with the seats, carpets and headliner all believed to be original. The original, matching-numbers drivetrain is also untouched, but has been maintained.

With continuous registration from new, this survivor Premier comes with all its books, including dealer delivery documentation and laminated first registration certificate. 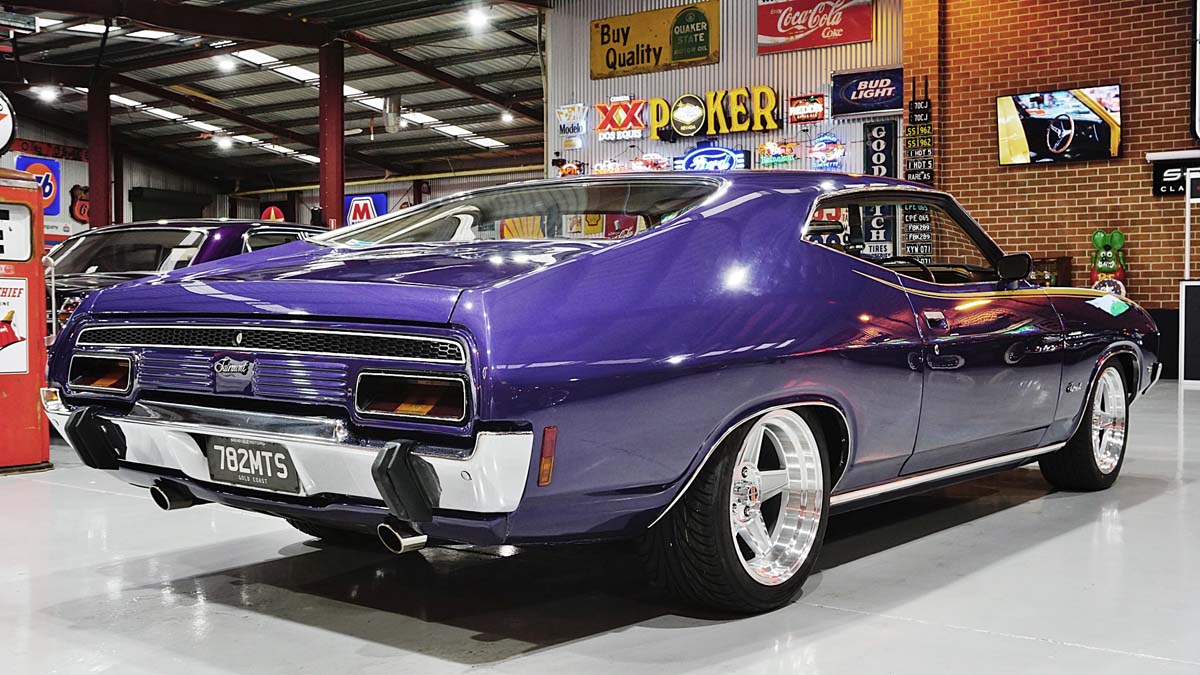 Purchased new in 1973, this Fairmont’s original owner held onto it until 2008. In his final years of ownership, the owner swapped the car’s original 6-cylinder engine for a 351 V8, with complementary Toploader 4-speed manual and 9-inch diff fitted, too.

A colour change to Wild Violet was done during the conversion, but the original chrome and glass was retained. Most of the Parchment interior is believed to be factory original, but a GS dash carries refurbished and recalibrated instruments. There’s an aftermarket stereo, too. 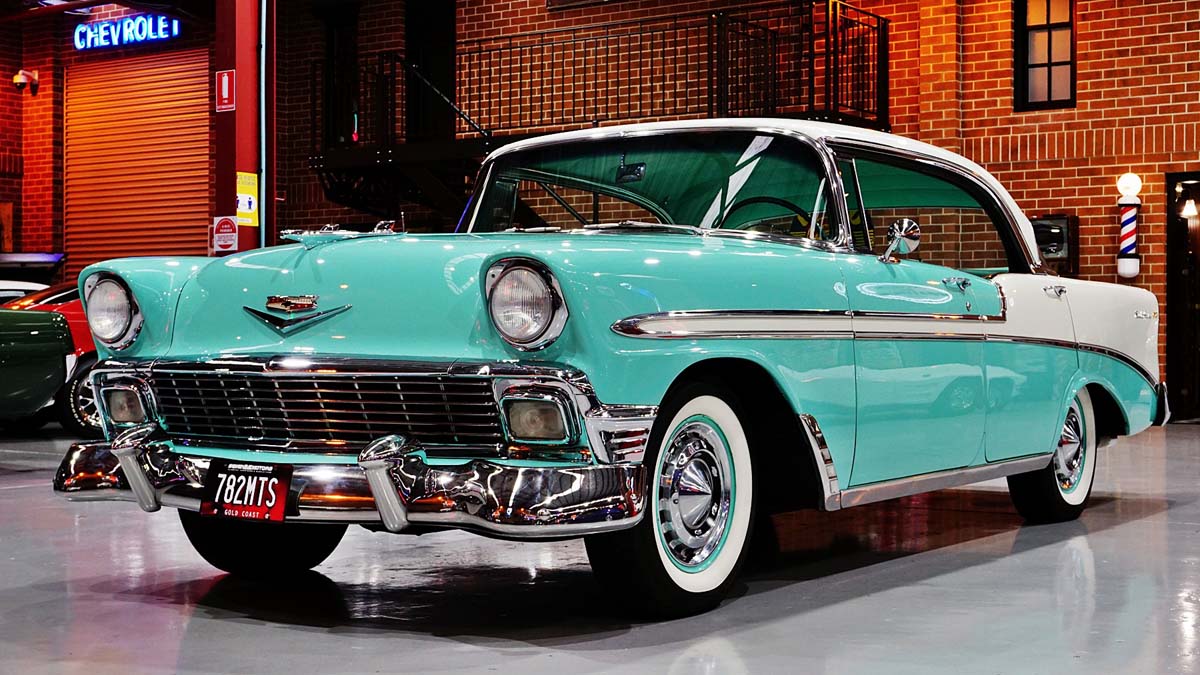 From a private collection, this standout ’56 Chevy is believed to have spent many years in a US museum prior to arrival in Australia.

From the first year that a 4-door pillarless hardtop was offered in Bel Air trim, this example has been restored in its original Pinecrest Green with India Ivory top, with stainless steel and chrome complete and in good shape.

Inside, the carpets, seat trims, door trims and headliner have all been replaced in 1956-correct fabric and vinyl, while under the bonnet, there’s an authentic 265ci V8 and 2-speed Powerglide automatic transmission. Ready to drive, this is a fantastic and iconic example of a classic American cruiser. 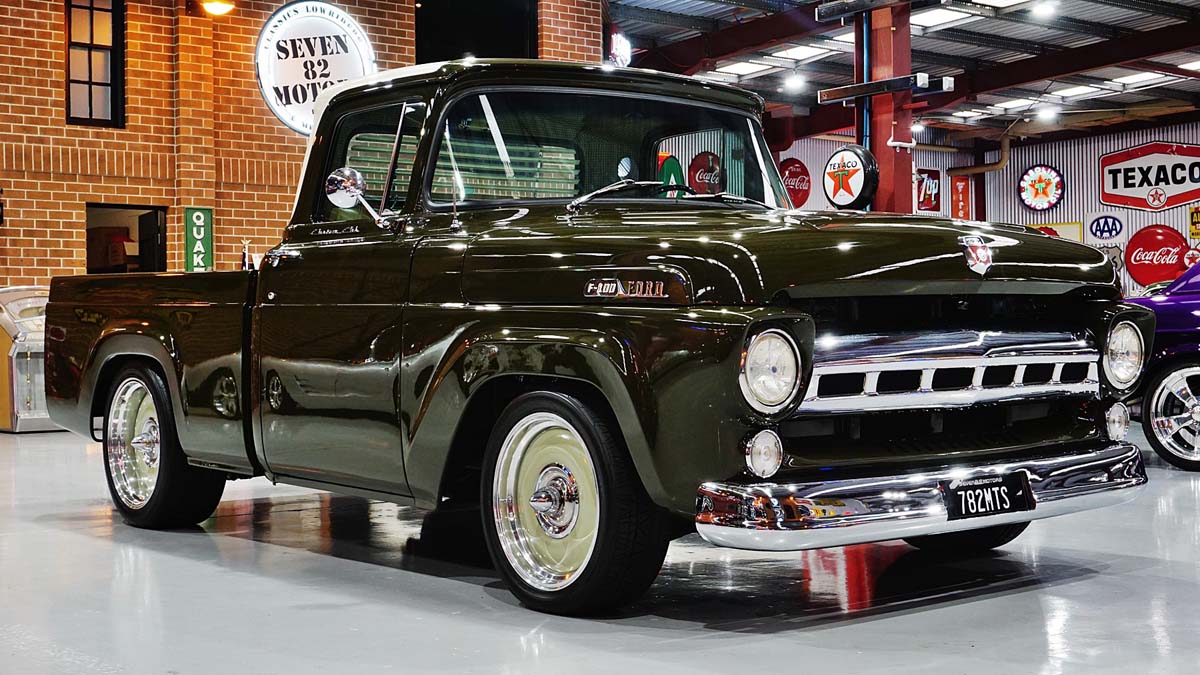 As 1957-model F-100s are rarely the subject of custom builds, it makes this example all the more exceptional.

A modern Ford front end, four-link rear, 9-inch and rebuilt 390 engine and C6 auto trans had all been fitted in the US prior to the consignor’s purchase, but once shipped to Australia, two years were spent rebuilding the pickup, including countless hours perfecting the body before a custom mix olive green paint was applied, topped with Mini Pepper White on the roof and teak timber planks in the tray.

Coys C-33 smoothie wheels are a combination of 18-inch front and 20-inch rear.

Inside, beige and cream leather is combined with houndstooth fabric inserts, while Chevrolet, Mercedes-Benz, Mercury and Falcon components have gone into the interior, too.

The SEVEN82MOTORS auction went live at 7:00PM on Monday, 12 July and runs to Monday, 19 July, with staggered closing times from 7:00PM.