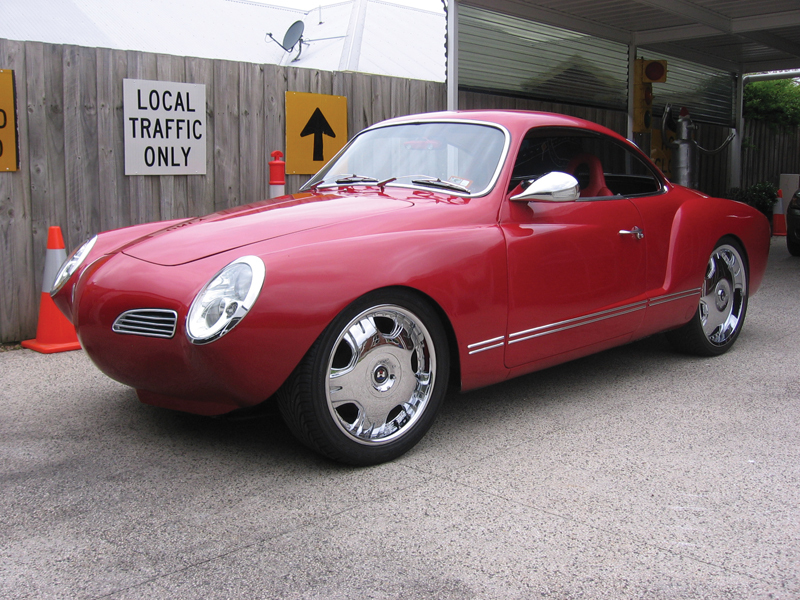 It all started when I was 15 years old. Growing up in Geelong I was just a normal kid going to school, playing tennis on the weekends and spending time with my family and friends
For Steve Muratori, merely owning the Karmann Ghia he'd dreamed about since he was 15 wasn't enough. This project wasn't about making a great car, it was about making something unique, too, as Steve explained.

It all started when I was 15 years old. Growing up in Geelong I was just a normal kid going to school, playing tennis on the weekends and spending time with my family and friends. Then, one day, I saw it - a fully restored VW Karmann Ghia. I loved that car and dreamed that one day I would own one. When I turned 18, I got my license and did the usual thing - did up a couple of Holdens and Falcons while getting married and having kids.

It wasn't until I turned 45 that I decided I wanted a project car. My wife and I started looking on the internet, but the same old cars seemed to be coming up all the time until one day, there it was.....a 1964 Karmann Ghia needing restoration. The car was in Adelaide and, going by the pictures, looked ok. I put in a bid for $6000 (I probably would have paid $8000), won the car and had it delivered to me.

Upon arrival, it looked pretty good, and I spent the next couple of days getting the car running. Driving it around the block, I noticed that I could see the road going by beneath me! The floorpans were almost non-existent. Additionally, when my teenage son sat in the back seat, he had no room for his legs, so that confirmed my decision to make this project a two seater.

Within a week of buying the Ghia, a space had been cleared in the double garage and the strip-down began. I started by pulling out the interior. Being fairly basic, it didn't take long, and none of it was really salvageable, either. I then decided to take off the doors, boot, bonnet and separate the body from the chassis. When I looked at the remains of the bare chassis, I realized there was nothing I could salvage from it! Aside from being rusted out, it had six volt electrics, drum brakes, old-style suspension and the feeble 1200 engine.
Knowing most VW bodies and chassis are interchangeable, I decided the best thing to salvage the project was to buy a later model VW chassis. After a few weeks of searching, I found a 1972 VW Superbug for sale for the princely sum of $400! Aside from being in good nick, it had a 1600 twin port engine, disc brakes, 12 volt electrics, Macpherson strut front suspension and independent rear suspension - the perfect basis for my Karmann custom.

Stripping the Superbug Beetle, I sold off the guards, bonnet and anything else I didn't need, but l did allow myself a little indulgence in saving the back end - and putting it to good use. My 'BBQ BUG' gets a lot of use and is a great talking point! I then took the floor pans off the Beetle chassis, welded brand new Karmann Ghia pans on and repainted it. I also cut the strut towers off the Beetle body and welded, bolted and braced them onto the chassis. I then put in new bushes, brakes, braided brake lines and adjustable lowered struts.
With the chassis sorted, work began on the engine. I stripped it down, then rebuilt it with Formula Vee pistons and camshaft, ported the heads, added a high volume oil pump, remote oil filter, custom extractors and, for something a bit different, I also added fuel injection. This came courtesy of a Mitsubishi Magna. As you've probably guessed by now, this wasn't going to be a stock resto!

Dropping the Karmann Ghia body onto the Beetle chassis, I realised my first mistake. The Beetle chassis has a 2 inch longer wheelbase, so the strut towers were hitting the Karmann Ghia body. Damn! After lots of head scratching, followed by cutting, grinding and welding, I finally made the two parts fit together as they should. While in a welding frame of mind, I started to stitch in all the replacement panels I needed. These included the bottom of the guards, doors, quarters and sills.

From the outset, I wanted this to be a custom project - something a little wild, like a Hot Wheels car. So, with that in mind, I'd also changed the wheel stud pattern to open up the options of rolling stock I could fit. At the local Tyrepower, we experimented to find the biggest set of rims we could stick underneath the KG's stylish body. I ended up with 17 inchers on the front and 20s on the back. I then bought a set of 2005 model BMW MINI headlights and took the car to a specialist bodyman to modify the front guards for the MINI headlights, and open up the wheelarches to take the big alloys. Once this was completed, I brought the car home to begin prepping the body for paint.

Although I had no idea where to start, I was fortunate enough to have some good friends who had experience with panel beating. I still did 95% of the work myself, but their guidance was invaluable. I repaired accident damage, custom made some brackets to mount the BMW door mirrors, welded up the holes where the bumper bars used to be, and fabricated a front spoiler to cover some protruding front suspension. I then took to the body with lots of welding, hammering and ultimately bogging. With the bodywork done, a spray painter friend painted it in a Mazda metallic red that, as far as I'm concerned, looks fantastic.

Keeping the modern custom theme going on the inside, I cut out the original Karmann Ghia dash and replaced it with one from a 2000 model VW Polo. This turned out to be a major job, as approximately two inches had to be cut off each side to make it fit, then special brackets had to be fabricated to hold it in place. I also made the air vents and did the electrical work to make the gauges fit. The door trims were off an EL Falcon and came from a mate, but to fit these turned out to be a huge job, too. Starting with a template in Masonite, I grafted the Falcon door cards to it, then reshaped them, screwed them in and 'glassed it all together, covering the result in a mix of red and perforated black leather.

Inspired by my success with the front doors, I made custom trims for the area behind the doors, then reupholstered them, too. Electric windows and central locking - with keyless entry - was also added. Getting these things done might sound easy, but getting each element of the interior right was a major job that took me approximately 100 hours of work each. But it was all worth it in the end. The rear side windows were modified to be removable. With these out and the front windows down, it gives the Karmann Ghia a pillarless appearance that not only looks good, but feels great when you're driving it.

Because the Polo dash was a lot deeper than the original KG one, the whole cabin had to be moved back about 30cm. As the car was going to be strictly a 2-seater, so this wasn't that big a problem, but still needed a lot of work to make things fit. The seats, ex-Honda S2000 and re-trimmed in red leather, had to be positioned as far back as possible, which meant the gear lever had to be modified, too. I bridged the 'gap' by making an extension to the shifter and bending it to fit through an H-pattern console similar to that on a Ferrari. Again, this sounds easy, but wasn't, requiring another 50 hours of work! The handbrake lever also had to be moved back to be practical.

I then fitted a JVC stereo head unit and, in the rear, added a custom-built speaker box beneath the old parcel shelf to hold a sub, amp and Focal speakers. I then lined the lot in new black carpet which was custom cut to suit the 2 seater layout. The finishing touch was a home-made rear view mirror fashioned from half a scale model of a Karmann Ghia.

The bulk of the work was completed 12 months ago, so for the past year, I've been driving the Karmann Ghia and have had a blast with it. However, the engine's custom extractors meant there's been no room for a heater, which meant the wife wasn't happy on winter drives! Solution? For me it was buying a pair of electric pet beds. The heater blankets out of these proved to be a good fit for the seats. Wired into switches on the dash, they work fantastically well.

With its big rims and not-quite-a-Karmann-Ghia looks, this car draws a lot of attention, from men and women, wherever we go. As soon as we park somewhere, people are taking pictures of it. The fuel economy is amazing, too. Because of the big wheels and the fuel injected engine, it averages 7 lt/100km.

All up, the build took four years at an average of 20 hours per week, which means I racked up about 4,000 hours. Dollar-wise, I think it owes me about $40,000. So, was all that time and effort worth it? HELL, YEAH! I got a lot of satisfaction from not only completing the build, but also overcoming each obstacle along the way. The pleasure my wife and I now get when we go cruising every weekend is just priceless. It doesn't do anything as well as our daily drivers (Volvo S40 turbo and Honda Civic Type R), but it's just a great car to be in and always puts a smile on our faces.

Thanks to my wife and two sons for all their help, Peter Allsopp for painting, and a huge thanks to Andrew Marshall for all his advice, mechanical and electrical skills along the way.
Steve Muratori 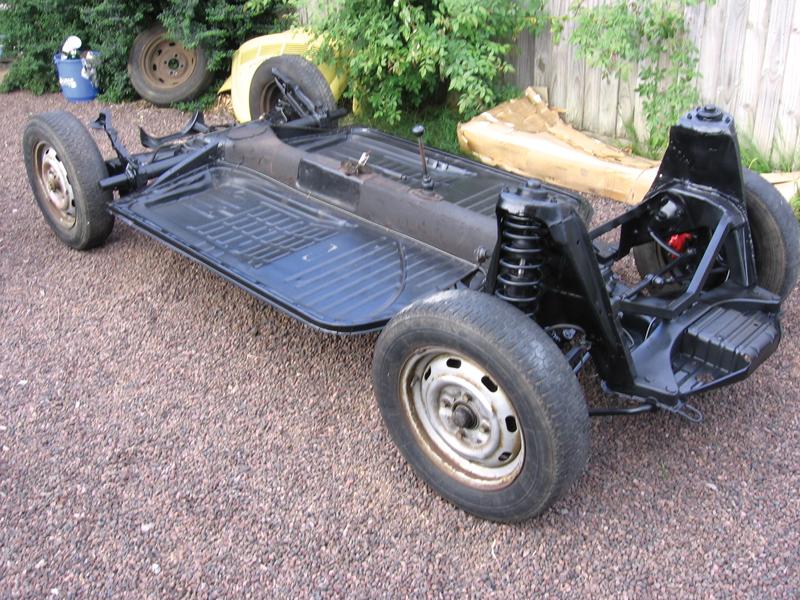 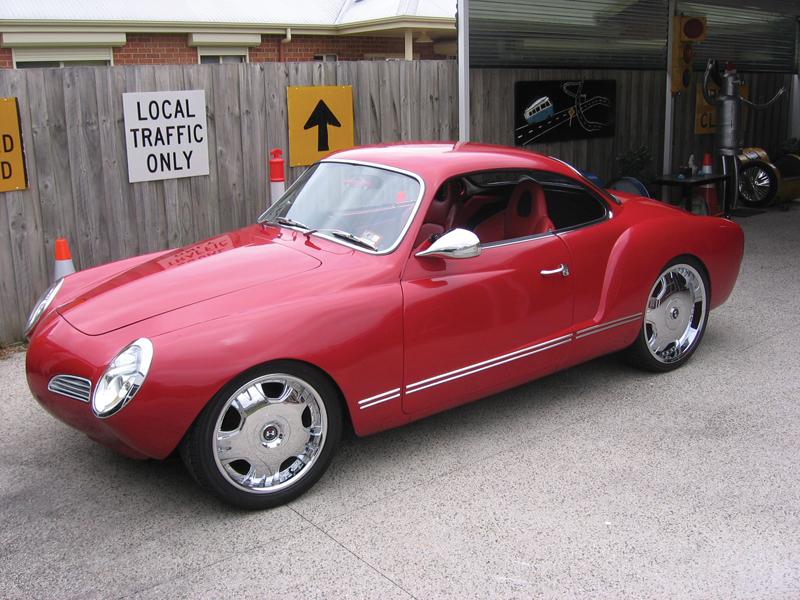 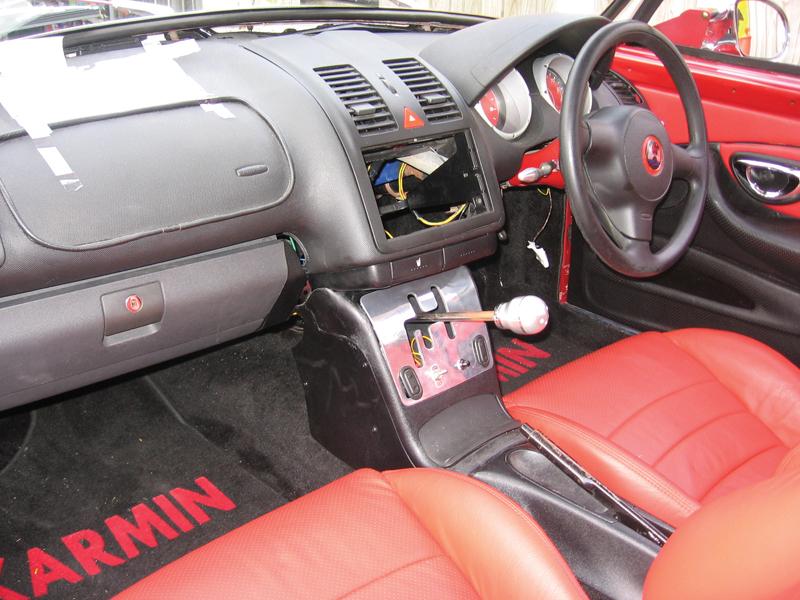 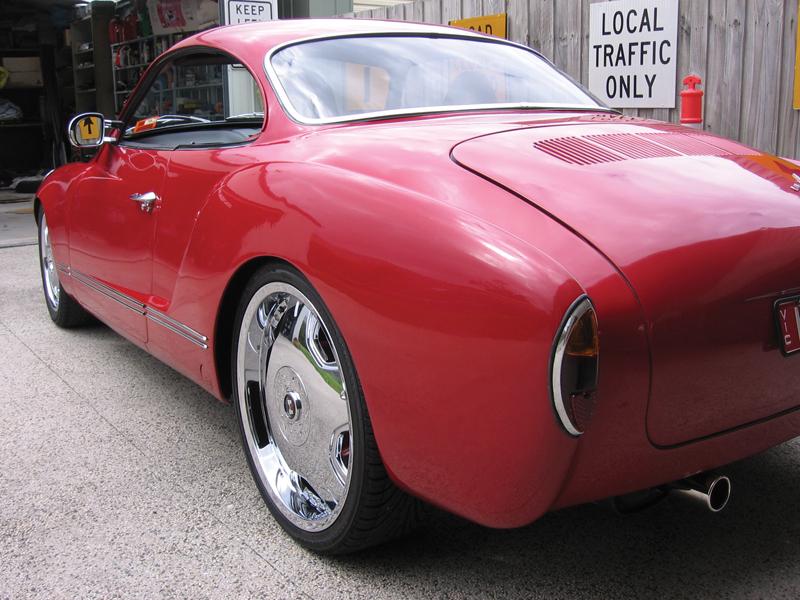 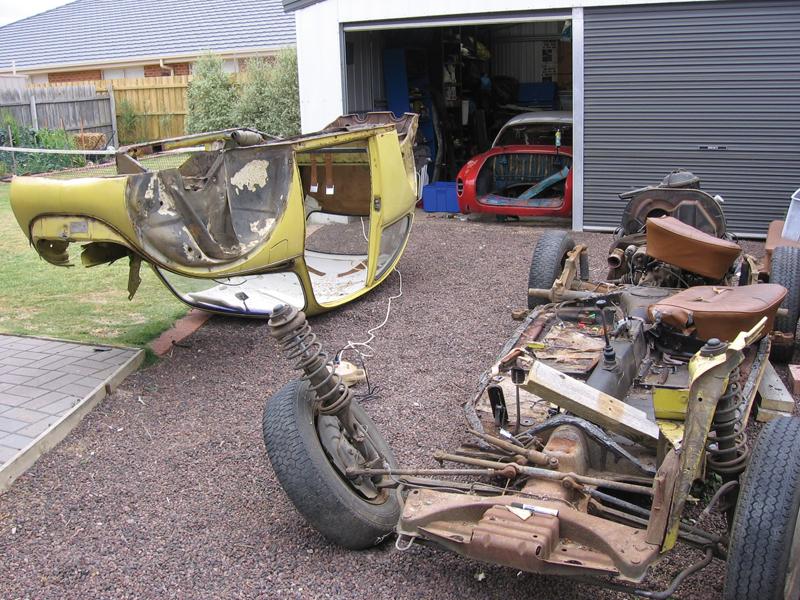 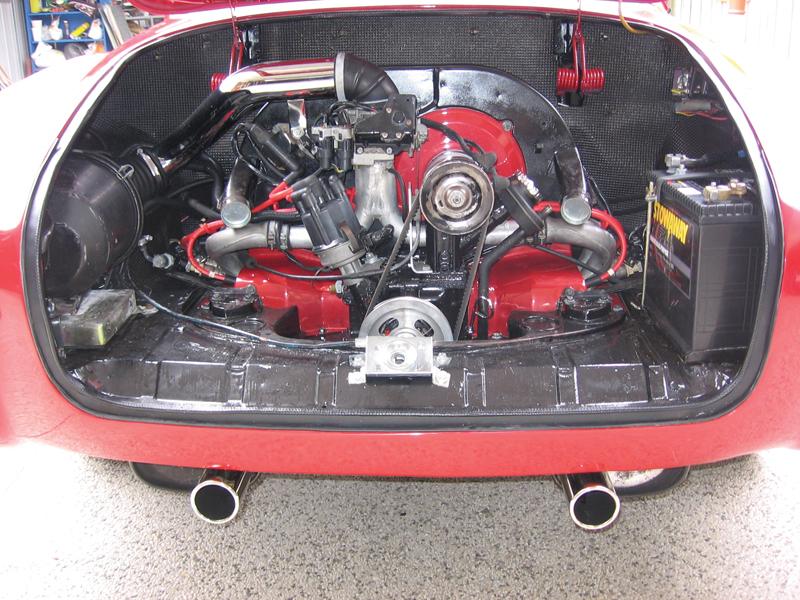 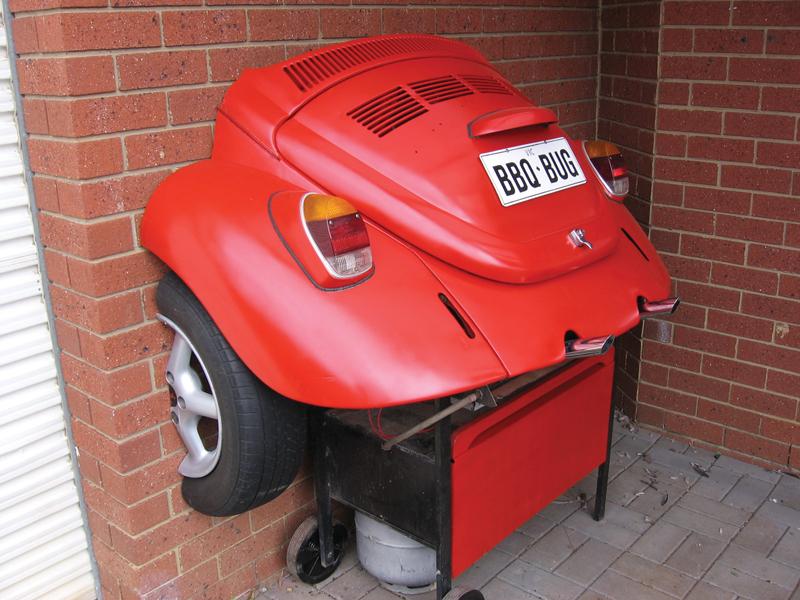 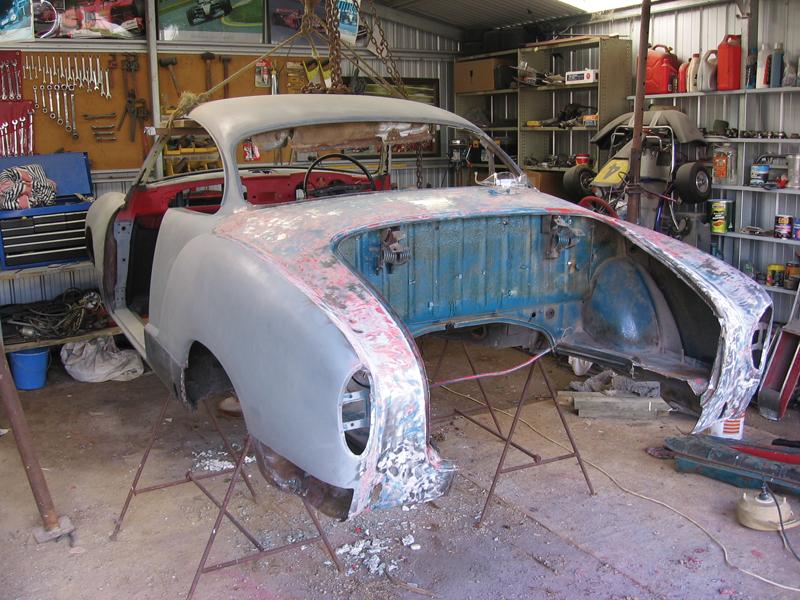 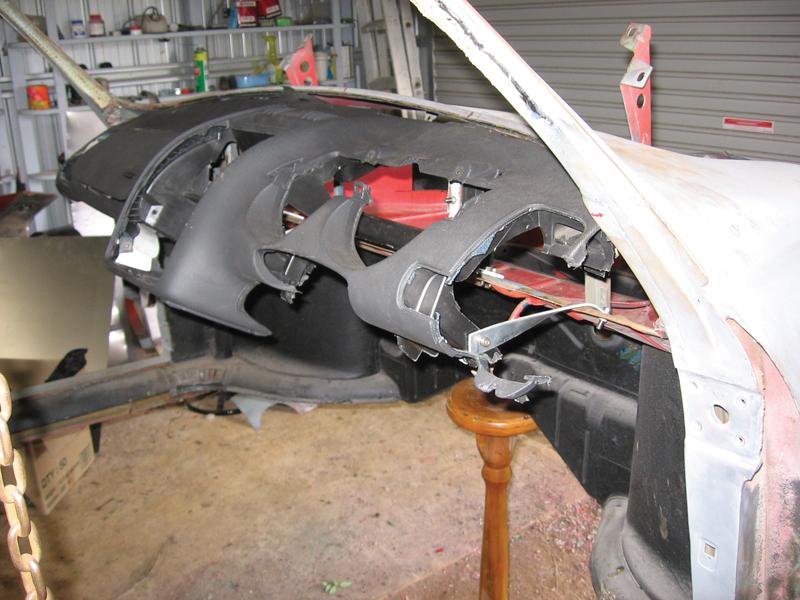