Prodrive in UK to produce 25 examples of ‘P25’ to mark silver anniversary of the first Impreza WRC.

To mark 25 years since UK motorsport engineering company Prodrive produced the first Impreza to the new-for-1997 World Rally Car rules that replaced the Group A category, a special series of Imprezas will be built in tribute to that rally-winning weapon. 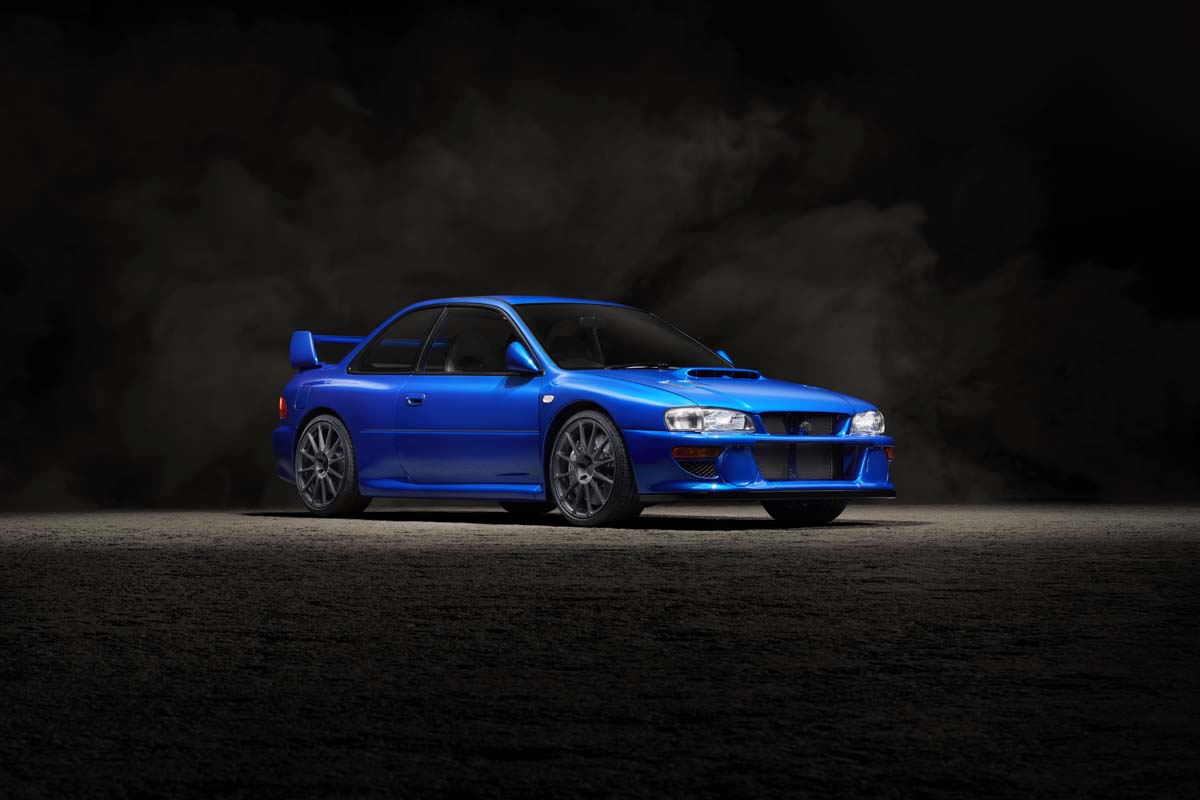 Dubbed the ‘Prodrive P25’, the new, limited-edition machine is based on existing first-generation Impreza WRX bodies, but with substantial modifications mechanically, aesthetically and technologically.

While paying tribute to the Impreza WRC, inspiration for the P25 also comes from the Impreza 22B, which was a limited-edition produced by Subaru in 1998 to celebrate their third straight WRC Manufacturers’ Championship and 40th year of automotive manufacturing.

The nearest thing you could get to the Impreza WRC in road-legal form at the time, the 22B was originally a Japan-only model, with 400 produced. Spec included a 2.0-litre Boxer four engine bored out to 2.2 litres, an upgraded clutch, Bilstein suspension, larger 17-inch wheels and a widebody treatment in the style of the WRC cars that increased width by 80mm. A unique bonnet, bumpers and adjustable rear wing were other features, with all 400 units finished in blue with gold BBS wheels and minimal badging.

Demand for the 22B from overseas markets saw Subaru build a further 24 examples in 1999, 16 of which went to the UK (where they were further tweaked by Prodrive) and five to Australia. The remaining three were gifted to members of Subaru’s World Rally Team, including 1995 WRC Drivers’ Champion, Colin McRae.

Despite costing an eye-watering $132,000 when new, the 22B has held its value thanks to its rarity and connection to Subaru’s golden era in the WRC. Today, genuine 22Bs regularly sell for six-figure sums, including one that went for more than $400,000 last year.

With styling updates by Peter Stevens and engineering overseen by David Lapworth, both of whom were involved in the creation of the Impreza WRC in the 1990s, the P25 starts with a genuine first-generation Subaru Impreza WRX two-door body. Prodrive then treat this to a substantial makeover, starting with the addition of carbon fibre front guards and rear quarters in the widebody WRC style. With the bonnet, roof, sills, bumpers, rear wing and even the mirror caps also in carbon fibre, the finished car weighs under 1,200kg – almost 100kg lighter than the 1998/99 22B.

For the motor, Provide have selected a current Subaru 2.5-litre Boxer four (as used in the Forester and Outback SUVs), but added their own internal components, including performance pistons, con rods, cylinder liners and a valve train with variable cam timing.

With a large Garrett motorsport-spec turbo, high-performance intercooler, special airbox and a lightweight Akrapovic exhaust system with bypass valves as standard, the extensively modified engine produces almost 300kW and 600Nm – a significant increase over the 206kW and 360Nm produced by the 2.2-engined 22B. Top speed is limited to 241km/h and 0-100km/h is achieved in under 3.5 seconds.

The transmission has been similarly updated from the conventional five-speed manual that powered the 22B to a six-speed ‘X-shift’ sequential shift semi-automatic with a race-style single paddle shifter on the steering wheel and the addition of WRC-style launch control that automatically shifts from first to third to maximise acceleration.

A similar upgrade of the all-wheel drive system includes an adjustable active centre differential to control drive distribution front and rear, with limited-slip diffs on each axle.

Classic McPherson strut suspension remains front and rear, but with uprights that allow camber adjustment and optimisation of the wider 1,770mm track. Bilstein shocks all round are adjustable, with the springs and anti-roll bars tuned to optimise handling on tarmac, according to Prodrive.

With almost 300kW on tap from the upsized engine, braking in the P25 had to be similarly improved, so Prodrive have fitted an AP Racing package that includes 380mm ventilated discs with six-piston calipers on the front wheels and 350mm ventilated discs with four-piston calipers on the rear wheels. Those wheels are 19x8.5-inch alloys in the BBS style but of Prodrive’s own construction, fitted with Bridgestone Potenza tyres.

In homage to the Impreza WRC, the exterior finish of every P25 will be metallic blue, but instead of the traditional Subaru gold wheels, the Prodrive alloys are finished in grey.

Classic and Modern inside

The interior of the Prodrive P25 retains much of its first-gen Impreza WRX features, but the analogue instrumentation has been upgraded to a fully digital MoTeC screen with multiple display options and functions that include a data logger.

A WRC-style ‘fly-off’ handbrake that disengages the centre diff has been added, along with a modern electric parking brake and race-style pedal box.

Door cards are in carbon fibre and a modern steering wheel has been fitted to accommodate the aforementioned paddle shifter, while the seats are trimmed in a mix of leather and Alcantara, with contrasting blue stitching and ‘P25’ branding front and rear.

A centre-console touchscreen for a modern infotainment system with Apple CarPlay/Android Auto compatibility has also been added.

Like the exterior, the interior trim will be the same on all P25s, but customers can request the rear seats be deleted and a half-cage fitted, with lightweight racing seats and harnesses another option. 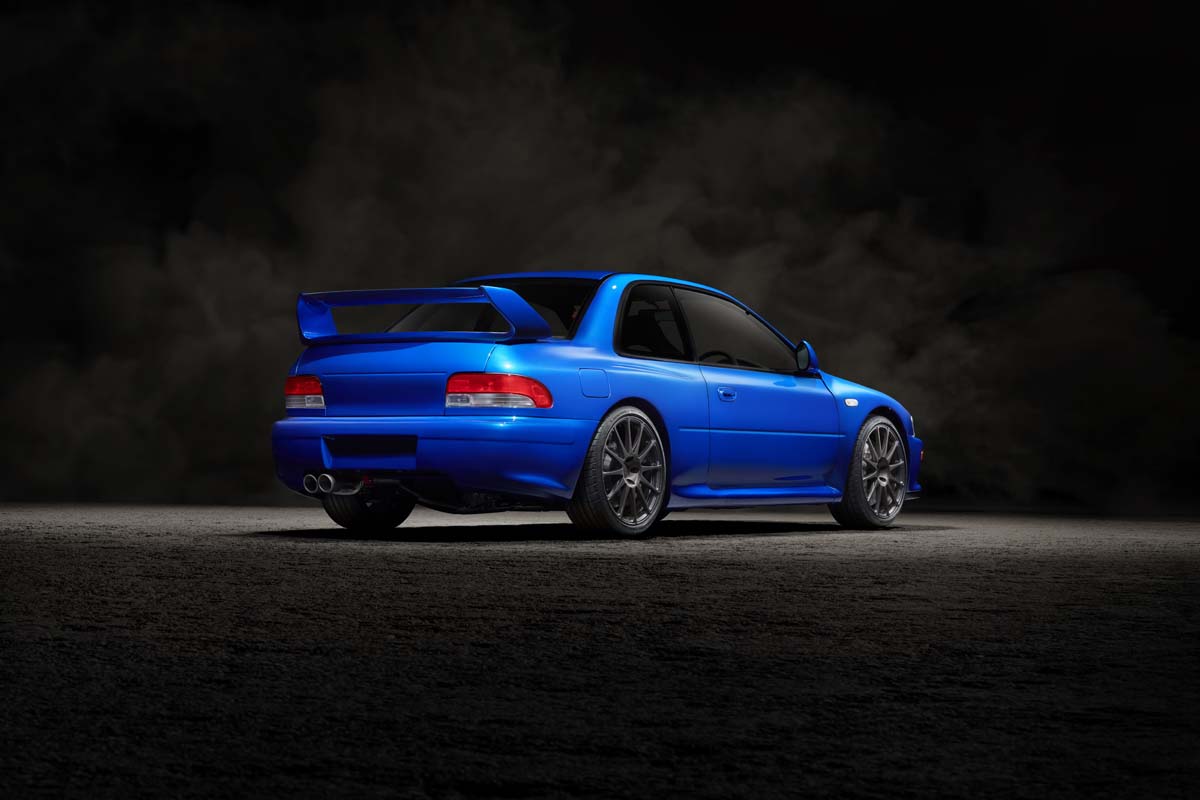 Prodrive has committed to building only 25 units of the P25, each of which will cost £552,000 on the road in the UK (AU$980,000 approx.). Even at that price, all 25 units sold out almost immediately after Prodrive officially announced the car on 20 June, The first cars are due to be delivered later this year.