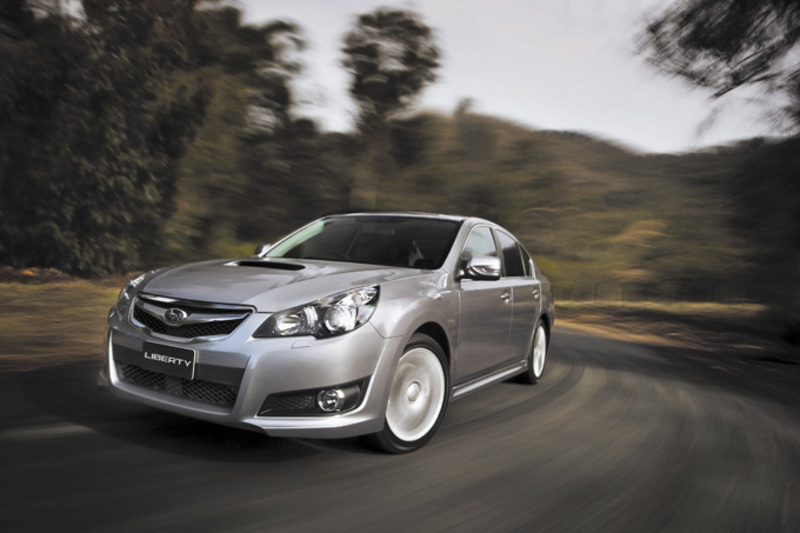 If you've always lusted after a Subaru Impreza WRX - or the even hotter STI version - you're not alone. Often, however, she who must be obeyed won't allow their boys the indulgence of such toys. But with the new Liberty range, the Japanese company might just have the answer. It's the new Liberty GT Premium with satellite navigation, and in six-speed manual guise it's a snip at $52,990.

While the standard "Rex" is a bargain priced $39,990 it has nothing like the level of standard goodies found on the GT and while it's significantly hotter than the GT Premium, the STI at $66,990 is a fair bit more expensive but it also doesn't match the GT Premium's "fruit." To put the respective cars into their power, torque and performance perspective it's worth noting that the GT's 2.5-litre turbo charged double overhead cam engine delivers a handy 195kW of peak power at 5600rpm and 350Nm of torque that is on tap at a relaxed 2400rpm.

The car can sprint to 100km/h in a pretty slippery and sports car like 6.2 seconds. Certainly the 195kW/343Nm WRX at 5.3 seconds and the 221kW/ 407Nm STI at 5.2 seconds are a bit quicker, but a tad over six seconds means the GT Premium is no slouch and there's not too much out there that will touch it at the lights.

In all, there are no fewer than 19 Liberty sedan and wagon versions from which to choose and they range in price (including GST but excluding dealer delivery and statutory charges) from $33,990 for the 2.5i manual sedan to $56,990 for the luxurious and sporty 2.5 GT Premium automatic wagon with satellite navigation. In the case of the Liberty GT Premium manual, its price has been cut by a not insignificant $4,500 compared with what buyers for the now superseded GT spec.B. This brings it down to the $52,990 figure.

The new fifth generation Liberty is a car that can trace its Australian heritage back 20 years and since then more than 130,000 have found homes in this country. It boasts a totally new platform, bold new body styling, more interior space, five star safety, greater fuel efficiency, lower emissions and more overall driveability and on-road refinement. Not only all of that, but most models have a longer list of standard kit goodies and while some prices have actually been cut, none have increased.

Subaru Australia boss Nick Senior says the fifth generation Liberty takes the model's sophistication, safety, durability and innovation to a remarkable new level.
"New Liberty offers outstanding ride and handling, and every variant in the range offers better fuel efficiency and lower emissions," he said.
"Interior space is improved to in every key dimension. This includes 30mm in width between the front seats and 68mm in length between the front and rear seats, while rear legroom is up 99mm and rear shoulder room 62mm."

Senior says safety is not optional at Subaru.
"That's clearly demonstrated by the inclusion of dual front, side, curtain and driver's knee SRS airbags, energy absorbing engine cradle, framed door windows for added cabin strength and strategic strengthening of the body.
"That's in addition to standard electronic stability control and ABS brakes with electronic brake-force distribution, plus a raft of other detailed safety features that shows Subaru isn't resting on its laurels, despite being a leader in this field," Senior added.

The GT Premium has an extensive and impressive basket of standard goodies that includes a rear reversing camera, Xenon headlights, an electric sunroof, 10-way power adjustment for the driver's seat (it also has a memory function), intermittent, rain sensing wipers, 18-inch alloy wheels and a McIntosh entertainment/satellite-navigation system. Subaru claims that every Liberty model has lower fuel consumption and the combined cycle efficiency gains are as much as 11.0 percent in automatic Liberty GT variants and 9.7 percent in automatic 2.5i models.

Emissions have also been cut. Ffor example, in the case of the automatic Liberty GT, CO2 output is down by 31g/km to 228g/km -- a 12.0 per cent improvement. Engine wise, Subaru has continued with but modified its 2.5-litre four-cylinder boxer engines, but the old 3.0-litre six-cylinder unit has been dropped and for the sedan. It has been replaced by the 3.6-litre "six" already used in the Tribeca SUV. The naturally aspirated single-overhead cam engine that powers the Liberty 2.5i delivers peak power of 123kW at 5600rpm and 229Nm of torque that arrives at 4000rpm.

The 3.6-litre naturally aspirated double overhead cam "six" that lurks under the bonnet of the 3.6R Premium boasts 191kW at 5600rpm and the same 350Nm peak-torque figure as the GT's turbocharged "four" but in this case it doesn't arrive until 4400rpm.
New also for the 2010 Liberty is a stepless continuously variable transmission that has been dubbed the Lineartronic by Subaru and it replaces the old four-speed automatic transmission. Opt for this transmission and you have the choice or shifting manually between the six pre-set ratios via excellent steering wheel mounted paddles or the centre console mounted shifter. It's one of the best CVT's around.

Also in the transmission department, the old five-speed manual gearbox has finally been replaced by a six-speeder.
New Liberty variants come standard with features including an electric parking brake. Dusk-sensing headlights, rain sensing wipers, keyless access and push button start are added on premium variants. New to the Liberty line-up are CVT-equipped 2.5i Sports variants that come with a sports front bumper and grille, Bilstein suspension, alloy pedals, 18-inch alloy wheels and Xenon headlights with washers.

The new Liberty models ride on McPherson strut type front suspension that is mounted to the cradle for improved steering response, handling and overall rigidity. The new compact double wishbone rear suspension is mounted to the sub-frame. To improve ride comfort and refinement, Liberty 2.5i and 3.6R shock absorbers use low friction oil seals, guide bushes and hydraulic oil.

Bilstein Shock absorbers are used in Liberty 2.5i Sports and turbocharged GT models, producing a sporty ride. Engineers from Subaru Australia and its Fuji Heavy Industries parent put the new Liberty and its Outback sibling through an extensive testing program in various Australian locations. While Subaru is a little coy about exactly where, the engineering team certainly got it right.To set them apart from the rest of the Liberty range, the 2.5i Sports and GT Premium models have been endowed with sculpted front bumpers, 18-inch alloy wheels and a sports grille.Liberty GT and 3.6R models have HID headlights with automatic washers. They also add automatic windscreen wipers that can activate at the first sign of rain.

The new, well-bolstered front seats have longer sliding rails and electronic lumbar support for the driver on premium variants.
In GT and 3.6R variants, the eight-way adjustable driver's seat has a memory function linked to the new smart key. The system allows for one memory function to be stored on the key, while four can be stored with the combination of smart key and a new door mounted memory switch. Front passenger seats are eight-way adjustable on premium models.

On the instrument panel, all four dials are always illuminated for optimum visibility and classy looking, easy to read dials include a new ECO gauge that encourages economical driving. The instrument needles sweep on ignition, there is now a low engine oil warning light in the main display and a multi information display with average fuel consumption indicator is located in the centre of the dashboard. A new great to hold, new look three-spoke steering wheel has integrated audio and cruise control buttons and while the reach distance is unchanged, its tilt adjustment is improved 2mm to 20mm.

All models have an air conditioning dust removal filter and rear under seat heater ducts and the new Liberty wagons come with a 60/40 split/fold rear seat for optimum cargo carrying capacity. In sedans, the rear centre armrest folds flat for storage of long items protruding from the boot. A six-speaker Kenwood Sound Meister with Dolby Pro Logic is standard in Liberty 2.5i variants and newly designed door speakers provide optimum sound at low to mid ranges. Range topping Libertys, including the 2.5i Sports Premium with SatNav, the GT Premium and the 3.6R Premium, are blessed with the superb 10-speaker McIntosh system.
Models equipped with SatNav have a nice, clear, high definition eight inch wide monitor.

While the interiors are handsome enough with a range of textures and trims, there's still a bit too much hard plastic for my liking, especially when there are lesser cars out there with, for instance, nice soft plastic dashboards.
In terms of the styling of the sedan and wagon, they make a bold, even somewhat aggressive statement but they lack the svelte look of their Mazda6 competitors.

Out on the road, it is difficult not to be impressed. During the media launch drive program that covered a range of roads, including everything from rough, pot-holed gravel to freeways, all the Liberty sedans and wagons absolutely shone. They are surprisingly roomy - especially in the rear seat - and there's no doubting the fit, finish and overall build quality. For sheer driving excitement the four-cylinder 2.5-litre turbo charged GTs take the cake, as is confirmed by a sprint time to 100km/h of a tad over six seconds. The 3.6-litre "six" is a supremely refined engine and with 350Nm – the same as the GT – it makes the Premium models a driver's delight.

Overall, Subaru has done a top job with the new Liberty sedan and wagon in all their guises and dealers should have little trouble in meeting a sales forecast of 550 units a month. 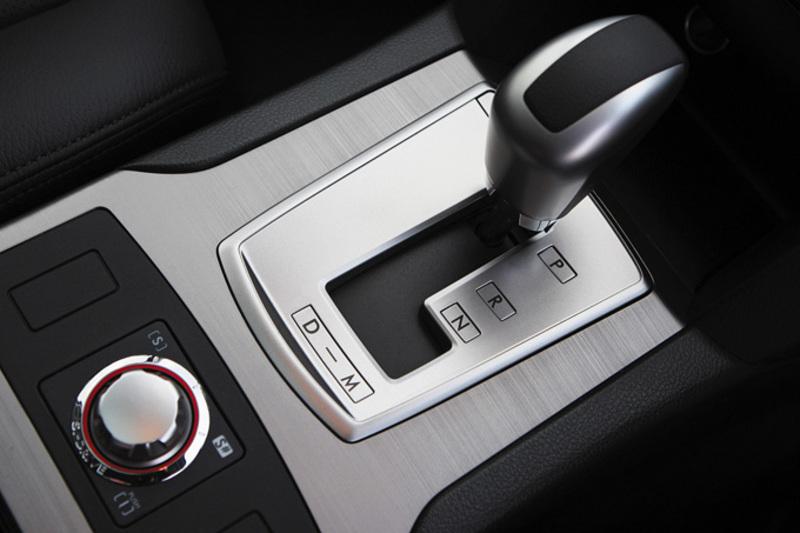 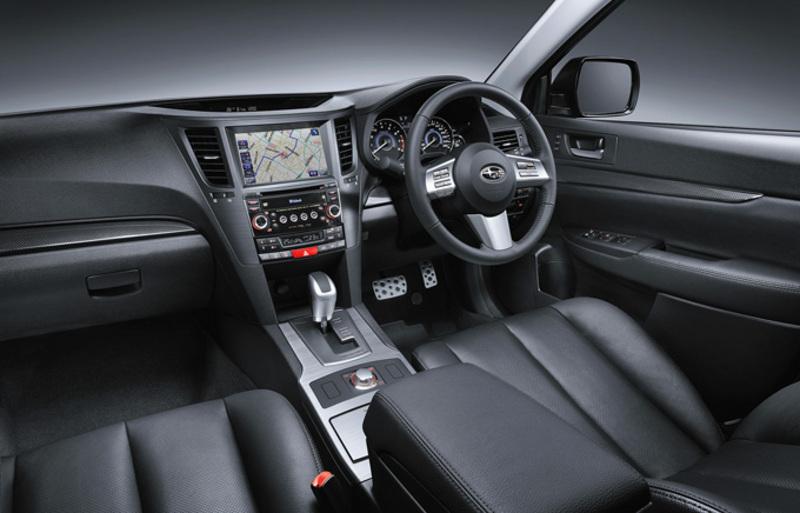 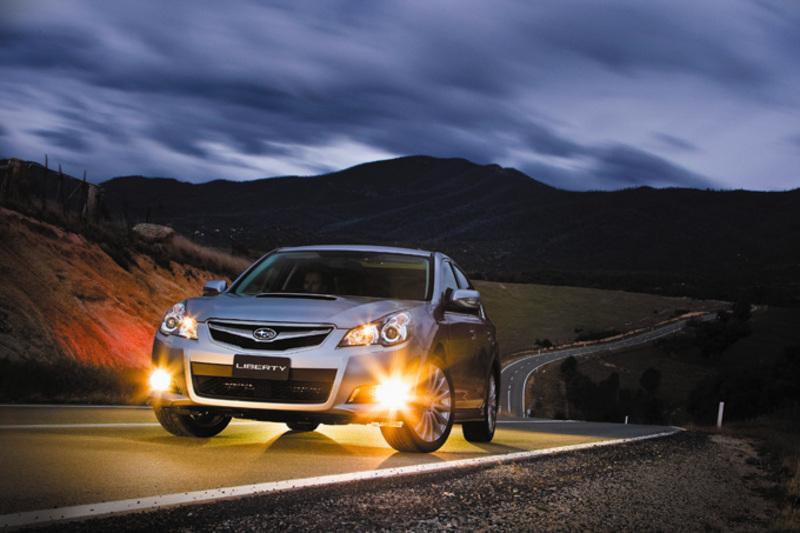 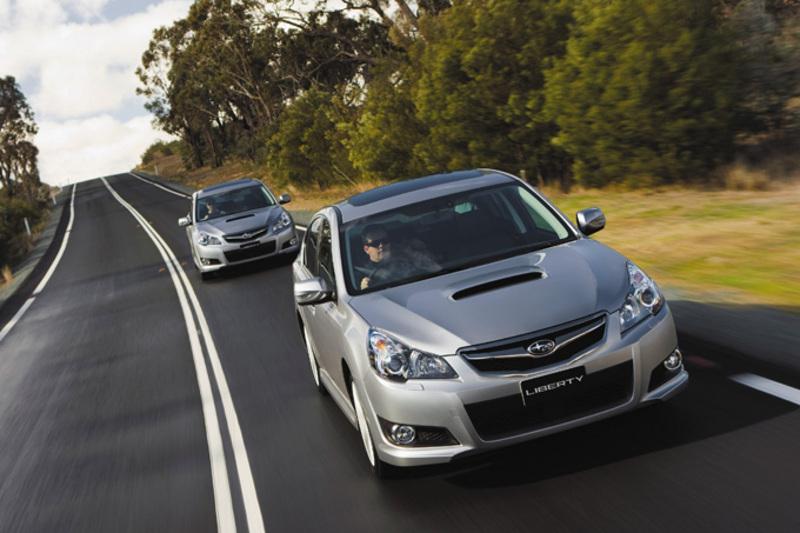 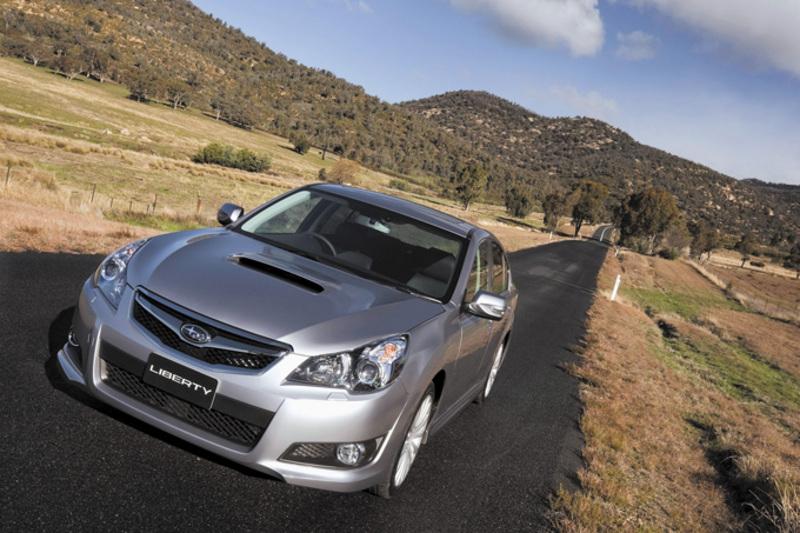