MG puts the ‘mobile’ into mobile gaming with the Maze concept.

Who’d have thought the famous MG octagon badge would ever grace anything like this? Following the ‘Cyberster’ concept unveiled in April, MG have released an even more radical vehicle – the ‘Maze’ concept.

While the Cyberster concept did have the faintest hint of classic MG roadsters in its design, the Maze is a new idea altogether. 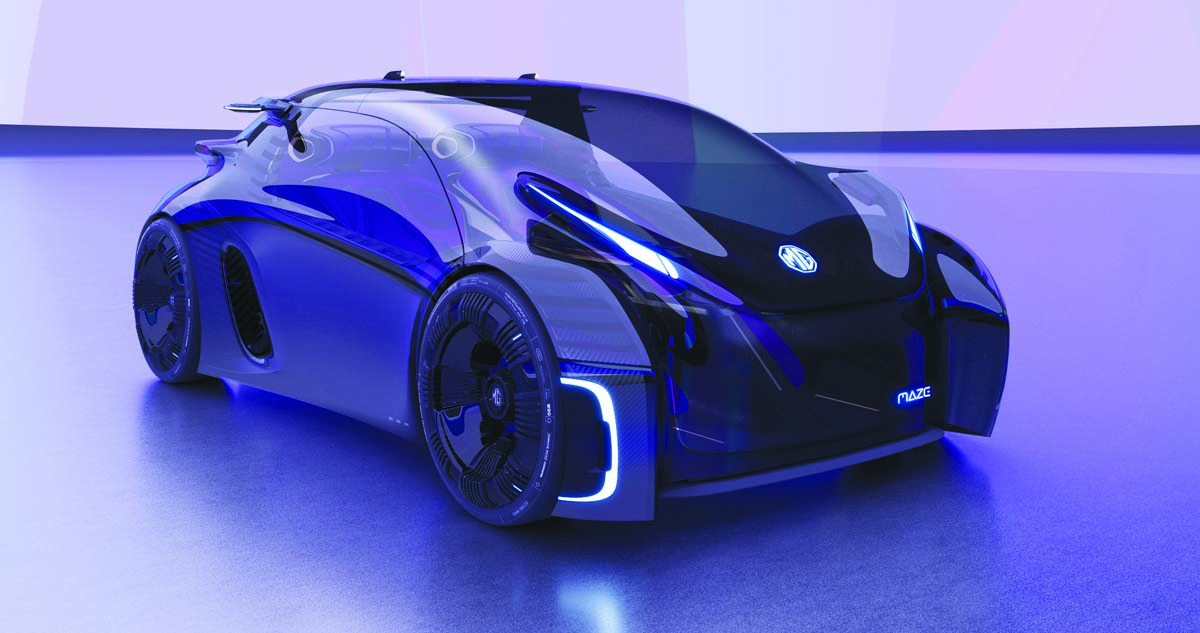 Since the revered MG name was purchased by Nanjing Automobile Group in 2005, the focus has been on the present and the future. That continued when Nanjing merged with Shanghai Automotive Industry Corporation to create SAIC Motor a few years later.

Starting with mid-sized sedans and hatchbacks, compact city cars and SUVs have been the reborn MG’s sole focus of late, so don’t expect any remanufactured MGAs and MGBs to come out anytime soon.

More recently, SAIC Motor have got their concept game going, following some admittedly naff MG-badged concepts (Icon and CS) with the Cyberster that was unveiled at the Shanghai Motor Show back in April, and now the Maze.

Developed by London-based SAIC Design, the Maze is described as “the future of urban mobility,” which is a tagline pretty much every EV concept from the last five years has adopted, but it is accurate in this instance. The Maze is different in a couple of key areas, too.

“With Maze, we wanted to consider what the future of a car community might look like, building from MG’s fan base and following,” said Carl Gotham, SAIC’s Advanced Design Director.

“The move to digital is unstoppable, so we wanted to create a concept that connected this digital realm to the physical one that gives us the real joy in driving.”

The Maze was created under lockdown conditions in the UK and this has influenced not only the design of the concept, but also the thinking behind it.

With millions stuck at home under said lockdowns, gaming became a popular pastime and many aspects from the video game world have been translated into the “real world” with the Maze, although it must be clarified that the concept is a digital creation only, with no likelihood of becoming a reality.

“The concept is a reaction to our lives during recent months, where we have been met with restrictions and limitations on our ability to move around and interact,” Gotham added. “Exploring the idea of ‘mobile gaming’, we used Maze as a platform for people to get out and rediscover their environment in a new and relevant way, opening up new experiences with their city.”

The gaming-inspired approach to the Maze starts with the seats, which carry ‘P1’ and ‘P2’ labels – for Player 1 and Player 2. Instead of sliding on conventional rails, these seats ‘float’ on angled arms via an “air pad” system that presumably allows some cushioning. There’s no need for fore and aft movement, though, as the Maze has no steering wheel or pedals. The user’s smartphone is used to control the former, while a central console handles the latter. 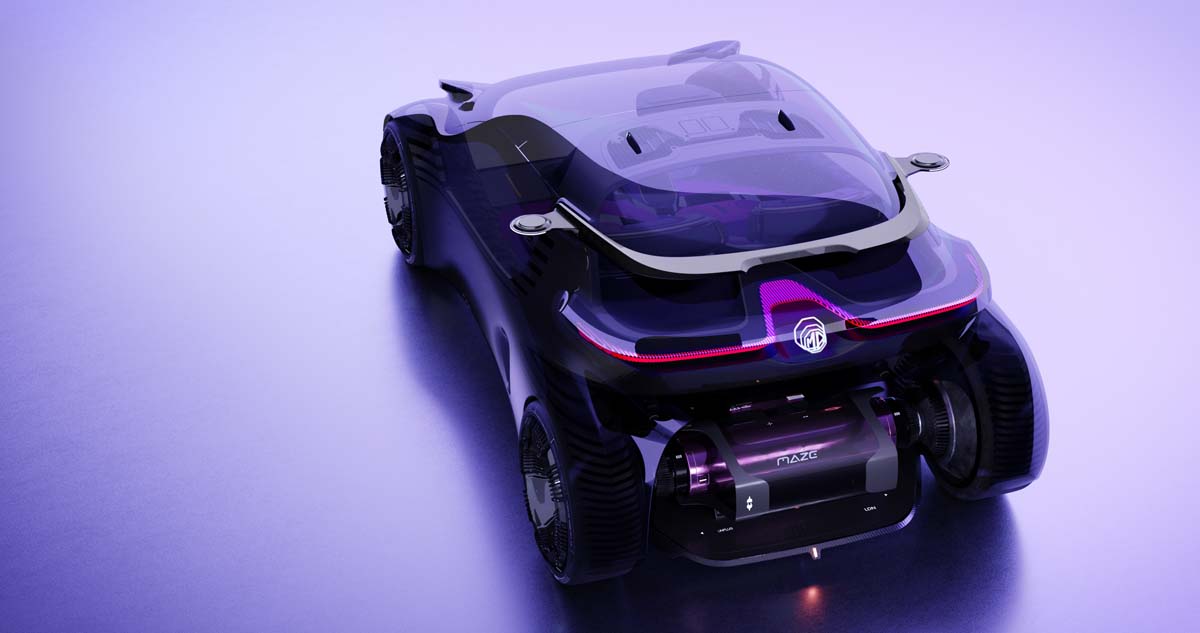 Once ensconced in the seats, which are accessed by a large clamshell opening that includes the roof, bonnet, grille and headlights, occupants are encouraged to discover their urban environment by seeking out digital street art in a points-based reward system that is projected upon the shell as well as the road ahead. According to MG, while playing the game and accruing points, users are also interacting with buildings and city landmarks. 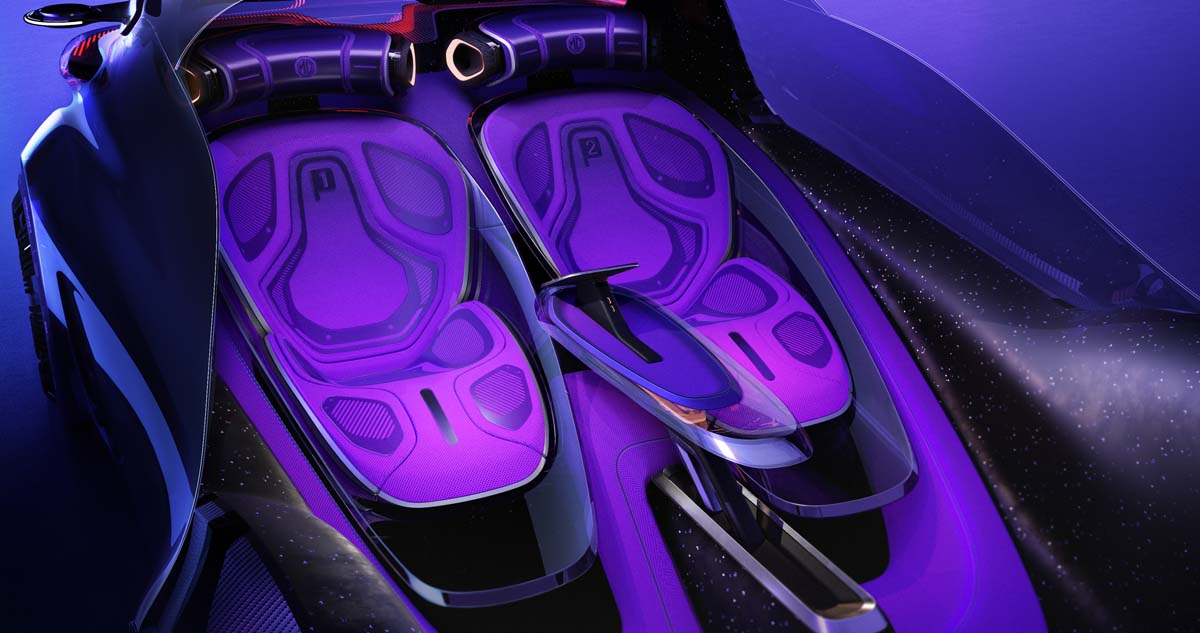 To enhance the experience, UX/UI (User Experience / User Interface) technology from the world of gaming has been incorporated.

That transparent shell, along with exposed chassis componentry and ambient lighting, are said to be inspired by high-end gaming PCs. Carbon fibre features in other parts of the body and there appears to be CPUs mounted on the rollover hoop that goes over the cabin.

Most design elements of the exterior are unexplained, leaving us to ponder the purpose of the small pilot lights on the roof and the disc-shaped projections on the pillars. 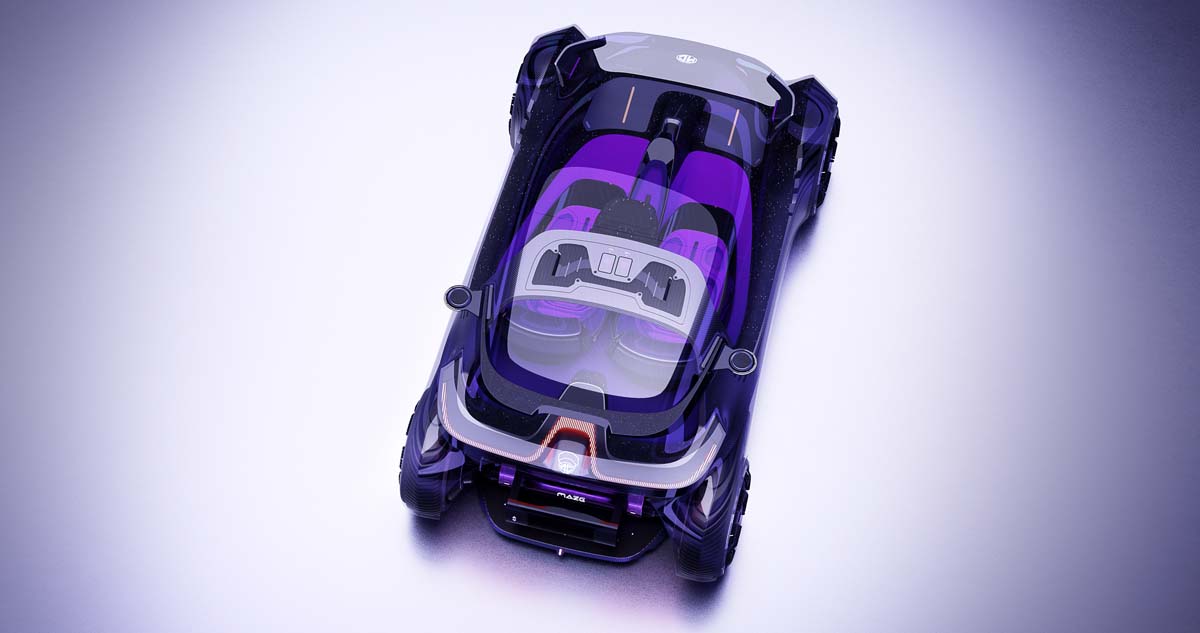 What is apparent is that the Maze shell is very aerodynamic, with a gently rounded shape and sleek covers for the wheels, wrapped in wafer-thin tyres, that sit at the extreme corners of the vehicle.

The bi-plane spoiler at the rear has echoes of the mighty Ford Sierra RS Cosworth from the late-1980s, while another nod to classics is seen in the horizontal slots aft of the opening canopy’s trailing edge – inspired by the Alfa Romeo Montreal, perhaps?

Unsurprisingly, the Maze is electric powered, but SAIC Design have incorporated some versatility into the powertrain. The electric motor and battery pack are mounted at the rear, and while no specs have been revealed, both are said to be interchangeable, plug & play style, to allow more powerful motors and larger capacity batteries to be added for adventures beyond the urban environment.

MG says the Maze brings the fun and pioneering spirit that has always defined the brand into the 21st Century by presenting something that’s “fresh, bold, brave and exciting”.

It’s also very fanciful, but the idea behind the Maze - of taking your gaming PC or console “on the road” - may just turn future generations into car enthusiasts.