Developed from the special Police Interceptor Pack Falcon, the GT was the brainchild of Ford Australia Managing Director, Bill Bourke. The experts told Ford that a GT came only with 2 doors but Ford went ahead anyway with the definitive Aussie 4-door GT based on the XR series, resplendent in its own exclusive colour, GT Gold. Its unique charcoal interior featured the sportier ZA Fairlane bucket seats, wood grained steering wheel, dash and matching gear knob and special Stewart-Warner complete instrumentation. Appointments were a cut above the XR Fairmont. The new GT was also the first full size Australian car variation to offer a total performance and appearance package, including the Mustang 289 V8 with Australia's first four barrel carburettor, 4-speed manual gearbox, sports suspension with radial tyres on 5.5-inch rims and steering wheel impact pad, all standard. Its GT stripes down the side and across the boot, distinctive GT medallions and grille blackouts caused a sensation when the first GT was released in May 1967 as a limited edition model late in the XR series.

In October, the real reason for its creation became apparent as the new GT Falcon took the "King of the Mountain" title at Bathurst thereby establishing the foundations for V8 Supercars into the 20th century. The success of the XR GT saw rapid development of the XT version released in April 1968 as an ongoing model. It gained the more powerful 302 V8, a beefy three speed auto transmission option, wider 6-inch rims, lower suspension and heavier shocks. It was also the first car to offer new grille mounted driving lights, a "four-eyes" performance tradition that was later revived in Tickford models. The 1969 XW GT ushered in the era of the real muscle car GTs, the first with the big 351 engines combined with aggressive styling and a large bonnet scoop. It was the first Aussie car to feature standard bonnet locking pins, racing style mirror and separate dual exhausts. The XW also saw the introduction of the Phase 1 and II GT-HO homologation models, which were the first local performance cars to feature a full width front spoiler. The Falcon GT was built from 1967-76, when Ford released the XC series without a GT model. The GT badge returned in the '90s in limited edition EB and EL GTs and in 2003 in the BA Falcon series. 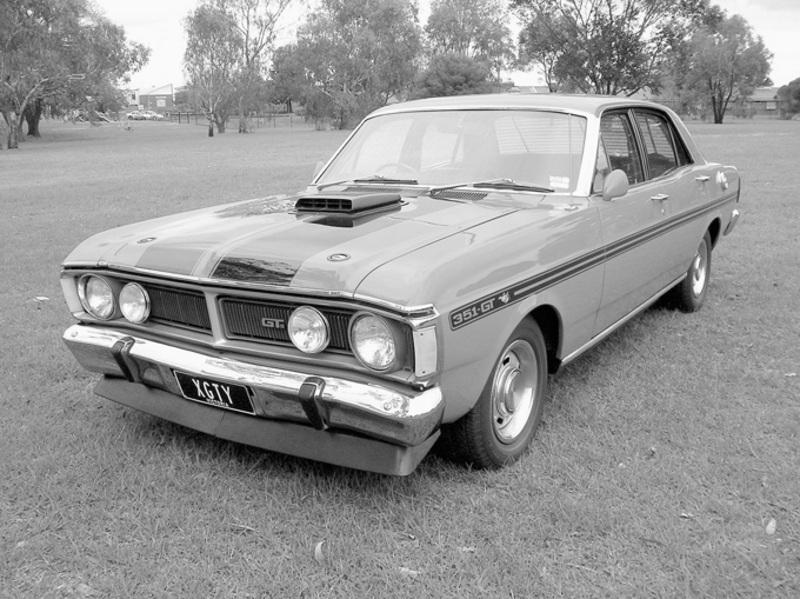