The unveiling of the "Tulsarama" Plymouth 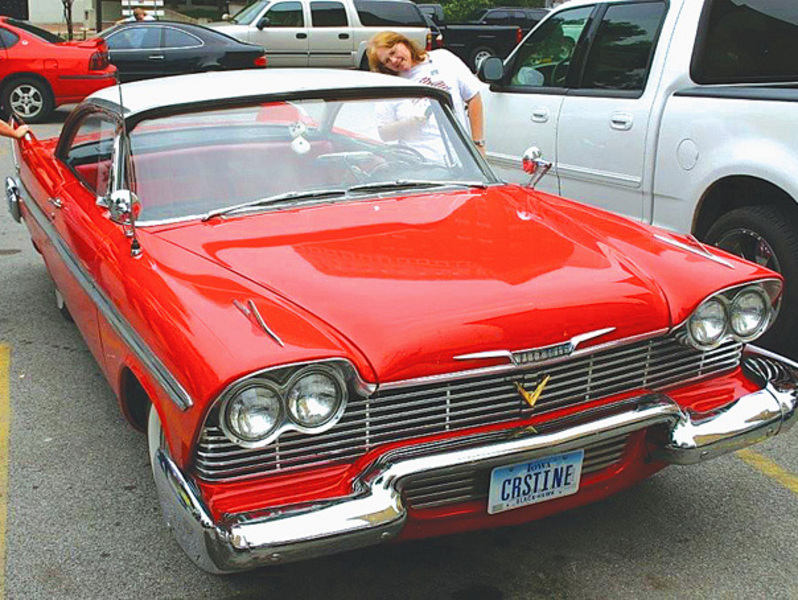 The unveiling of the "Tulsarama" Plymouth

The unveiling of the "Tulsarama" Plymouth was an automotive event 50 years in the making and JUST CARS' US correspondents, John and Adam Cooper, were there to see how a brand new Plymouth survived a 50 year journey

Way back when. . . . .
June 15, 1957 - the townsfolk of Tulsa Okalahoma wanted to bring attention to the town's Golden Jubilee Week, also known as "Tulsarama", so they thought it would be a good idea to bury a car! Who would think to bury a car for 50 years? Maybe a country scrapyard needing landfill, or some mafiosi hiding the 'evidence'! But this was no ordinary burial and certainly no ordinary car. As June 15 dawned, a small group of locals gathered at the front of Tulsa's county courthouse.

As the crowd slowly grew, the mid-morning sun began to sparkle across the 'Desert Gold' and 'Sand Dune White' duco of a brand new, 2 door Plymouth Belvedere. The Plymouth's "place of rest" looked like a large swimming pool to the growing crowd, who were now craning their necks to get a better view of proceedings. As the Plymouth sat in a special cradle alongside a big hole in the ground, the purpose of the hole, and the Plymouth's place in it, became clear. One of the most advanced examples of automotive engineering available in 1957, the showroom-fresh Belvedere was considered to be the ideal centre piece. . . for a time capsule!

The fully enclosed garage. . . . .
As part of America's fascination with the space age, and what the future could hold, time capsules were all the rage through the 1950s and 60s, but few had been attempted on the scale, or with the fanfare, as that undertaken by the city fathers of Tulsa. It was perhaps a reflection of the times, too, that the concrete vault which had been carefully prepared in the county courthouse lawn, was even said to be nuclear bomb proof. It was an even bigger recognition of the esteem that Plymouth was held in, that one of their cars was chosen to be a part of the time capsule. But why a Plymouth?

On their debut, the entire 1957 Chrysler range had electrified the motoring public, but the Plymouth came in for particular praise thanks to its long, sleek and attractive styling. A Plymouth Belvedere hardtop was selected for the capsule as "an advanced product of American industrial ingenuity, with the kind of lasting appeal that will still be in style 50 years from now", according to Tulsarama's Event Chairman, Lewis Roberts, Jr. Once sealed in its concrete tomb a metre below ground, the Tulsa time capsule would remain undisturbed for 50 years, and was not to be unearthed until 2007 as part of Tulsa's Centennial celebrations.

50 years under. . . . .
"Miss Belvedere" as the Plymouth had become known, was fixed to a pair of steel girders in preparation for her placement in the concrete sarcophagus. For the time, the concrete was as high tech as the car it would surround, and boasted a special waterproofing additive to keep the moisture out. Organisers hedged their bets a little, though, by covering Miss Belvedere in paper impregnated with cosmoline (a vaseline-like jelly substance used as a rust preventative), then wrapping her in a "gown" of vacuum-sealed plastic as a further safeguard. Miss Belvedere was packed with various items, including drums of local fuel & oil.

Tulsa was a rich oil producing area at the time, and who could know back then how much of this liquid gold would be available in the future? Other items placed with the car included a carton of beer in steel cans, a woman's purse, aerial photographs and aeronautical maps of the area, prayer books, letters, proclamations, cigarettes, bobby pins, tranquilizers, even an unpaid parking ticket and a US$100 savings bond (that would be worth about US$700 with 50 years' interest).

Low miles, always undercover. . . . .
Also placed in the capsule were a bundle of postcards that contained the names of people who were hoping to win Miss Belvedere in 50 years time as part of a unique competition run in conjunction with Tulsarama. Locals and visitors alike were asked to correctly guess Tulsa's population when the time capsule was unveiled in 2007. The nearest correct guess would win the Plymouth, and the savings bond. It would help if you were still alive, too! In the event of the winner being deceased, the ultimate low mileage Plymouth would be passed to his or her nearest relative.

In addition to the items packed with the car, there was a separate time capsule, around the size of an LPG tank, which was made from very thick steel and packed with 50's goodies, including a rare American flag with less than the normal amount of stars, souvenir plates, records, books, period photos, and other items. This capsule was put in the vault behind the car when Miss Belvedere was lowered into her vault. As the concrete slabs that topped the vault were slid into place, the crowd got their last look at Miss Belvedere - at least for another fifty years.

Suddenly, it's 2007. . . .
June 15, 2007 - my son and I have travelled across the world to see Miss Belvedere's unearthing. It was raining in Tulsa as we waited in a specially-assigned media area, but that hadn't deterred a large crowd from all over the States plus representatives of the world's media from witnessing this special and unique moment. In the course of this journey, I was occasionally asked "Why go halfway around the world just to see an old car?" If you're a regular reader of this magazine, and especially if you're reading this article now, you'll already know the answer to that question! Miss Belvedere was about to be removed from her tomb today, and I, like many others were on tenterhooks, wondering just how well a '57 Plymouth could survive five decades underground. For some, this was just a news event, but for me this was very much a CAR event.

The unearthing. . . .
The grass in front of the court house was removed, along with many tons of dirt, to reveal the top of the vault, all of which seemed to take an agonisingly long time! Excitement brewed as the lids were removed, but instead of the immaculate tomb we were all hoping for, we were greeted by the sight of Miss Belvedere squatting in a metre-deep moat of muddy water the consistency of soup. There were a few tears from some of the people assembled who had put literally years of work into preparing for this special moment. However, the Belvedere appeared to be still sealed in its giant plastic-type bag, so the show went on in the hope that the ravages of time and water hadn't got to the car itself.

Later, with much ceremony and fanfare, Miss Belvedere was craned out of the vault, loaded on a truck with the time capsule and moved from where she had sat for the past 50 years. The truck slowly made its way away from the burial site to the local entertainment complex in front of many hundreds of people. Amongst were young and old - some of the latter were at the same spot 50 years ago - stories were being exchanged and new stories being told. Despite early misgivings, the atmosphere was still full of anticipation. Later that day, in front of around 3000 people, the car was unveiled and unwrapped.

The unveiling. . . .
Celebrities and organizers had all waited for this moment to arrive for some time, as there weren't any sneak previews for anybody. When the wraps were finally removed by hot rodding legend, Boyd Coddington, Miss Belvedere was greeted by a dumbfounded silence. Close to 50 years of being immersed in water had taken a heavy toll - the Plymouth was a rust-encrusted shell of her former self. Locals attributed much of the damage to serious flooding that hit Tulsa in 1983. While the vault shell was well made, the lid was in three separate pieces, which turned out to be its downfall. One of the joints on the lids had failed and allowed water from the flood and watering of the lawn above to seep into the vault over many years. The car retains its basic Plymouth shape, but in very rusty condition. I am the eternal optimist, but she was in such a poor state. The interior was almost non-existent, the instrument panel resembled a lump of dirt, the rear springs had rusted out (most of the spring remains were found in the bottom of the vault), and the carby resembled a pile of ash on the top of the inlet manifold.

The dipstick was removed at the unveiling. Unsurprisingly, it showed nothing but rust and water. One can only imagine the state inside that zero mile motor. The cans of beer were found rusted out on the floor in the front of the car where they had floated to when it was full of water. Even the drums of oil had rusted away. Sadly, Miss Belvedere is beyond restoration, in my opinion, as the water has not only been inside every component possible, but has also sat there for a very long time. On a brighter note, the items inside the separate time capsule were in perfect condition. Apparently, this was due to the fact the steel used was so thick, and the welds so good, that the water couldn't penetrate. All items, including the guesses on Tulsa's 2007 population, looked like they'd been placed there yesterday.

Ashes to ashes, rust to rust. . . .
The winner of Miss Belvedere was announced a week after the unearthing. His name was Raymond Eugene Humbertson and his guess of 384,743 - the actual population of Tulsa today is 382,457 - was remarkably close. Unfortunately, he passed away in 1979, so, under the terms of the competition, the car will go to his nearest living relative. Pending the outcome of this stage, Humbertson's sisters, Catherine Humbertson Johnson 93 and LeVada Humbertson could be next in line. Both are planning a visit to Tulsa to see their most unusual inheritance. So, does this poor, rusty old car story have a happy ending? The answer is 'yes'. An American museum has allegedly offered to buy the car from its new owner for US$300,000 so they can retain it for what it is now - a 50 year old artifact. I, for one would go and visit her again, just for the memory of being a part of the opening. I sure won't be around when they open the stainless steel vault of the next buried car in Tulsa in 2049. Let's hope that one's well sealed!!

So what was Tulsarama?
In the 1950s, a healthy rivalry existed between Oklahoma's two largest cities - Oklahoma City & Tulsa. Oklahoma City was the State Capital, while Tulsa was its second biggest city. When Oklahoma celebrated 50 years of statehood in 1957, all the festivities & events, including a visit by President Eisenhower and Hollywood stars like Mickey Rooney, revolved around Oklahoma City. Feeling a little left out of the celebrations, Tulsans decided to create their own festival - Tulsarama. Amongst the special parades, dances, plays, beauty pageants, Native American dances and even beard growing contests (?!), a time capsule was planned for burial in the grounds of Tulsa courthouse. When Chrysler, who were reportedly looking for a 'different' way of promoting their cars, got wind of the Tulsa plan, they offered one of their new 1957 Plymouths to use as the actual time capsule - the rest is history! 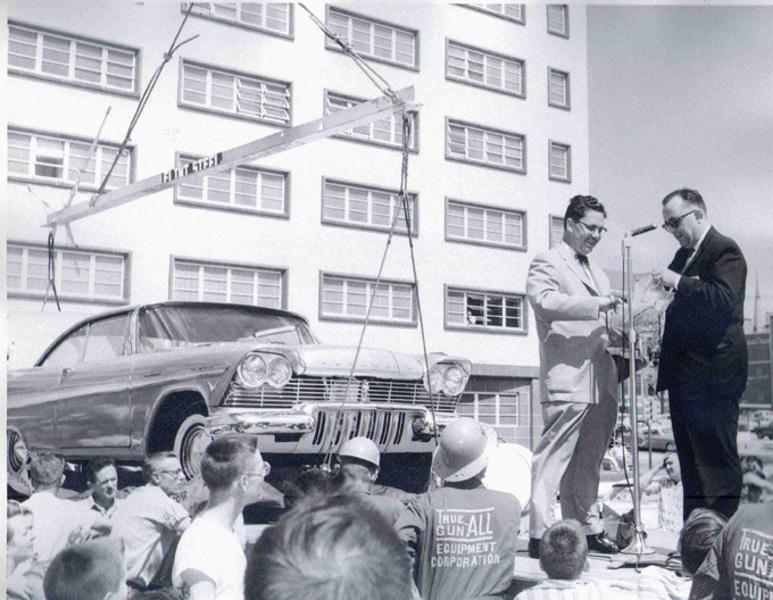 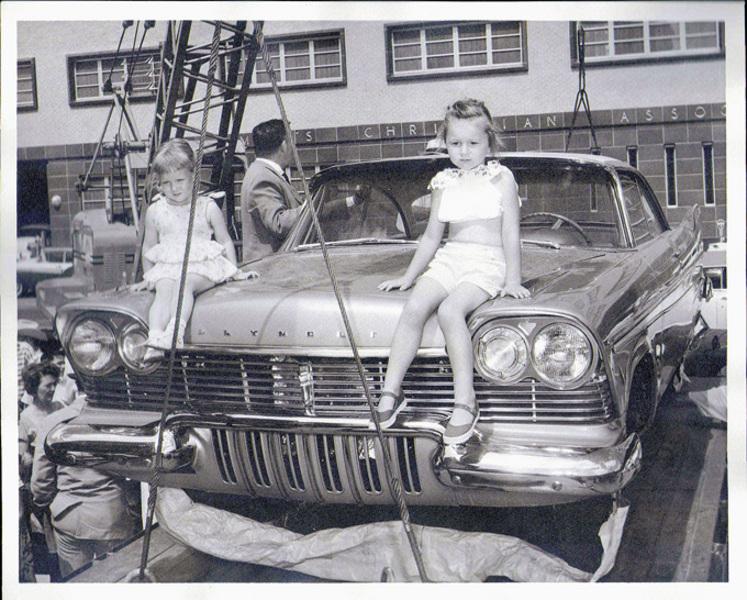 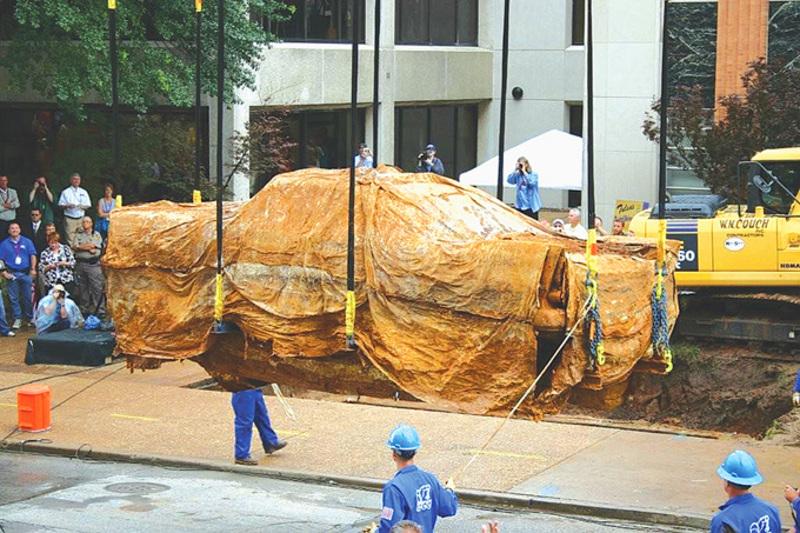 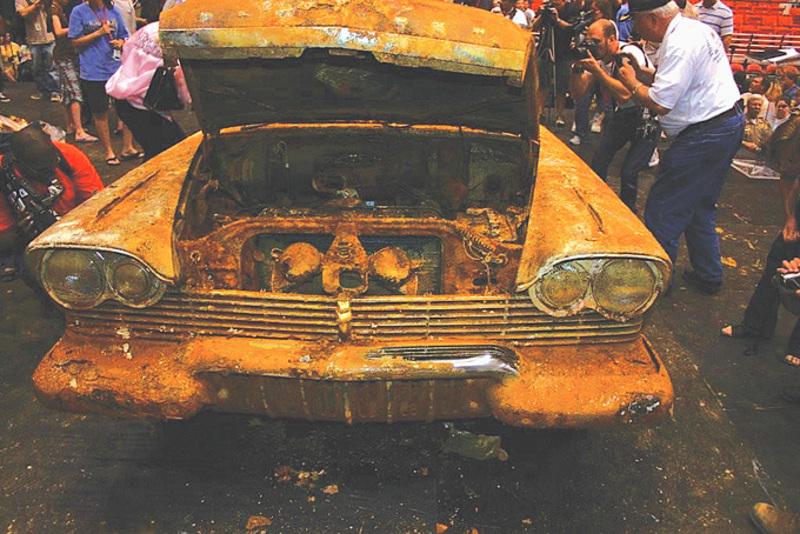