Queenslander Steven Shepherd in a Mitsubishi Evo X won the second heat on day two, making it two from two after taking the first heat on Friday with some consistent and persistent driving that served him well in a day of changing fortunes in the Four-Wheel-Drive Bosch Australian Rally Championship opener at Rally Calder.

In the Two Wheel Drive Bosch ARC, South Australian Nissan Silvia driver Jack Monkhouse took the fight up to the works Hondas of Eli Evans and Mark Pedder, with the privateer leading the heat with some daring attacks right up to the last stage when Evans took back the lead and the eventual heat win.

The four wheel drive championship result followed an intense battle in the second heat after the weather change overnight which reversed the sunny and dry conditions on Friday, turning the dirt tracks around the Calder complex into mud baths and the tarmac stages into skating rinks.

Shepheard admitted he made a slow start to the day, sitting as low as fifth after the first few stages before a major rethink on car set up enabled him to pick up the pace and push though to sit in equal second heading into the day's final stage. A huge effort on the final test saw Shepheard push the Evo X to a stunning heat victory.

"I was thrilled with the last gasp win, that was an unbelievable day, I'm stoked to get the points, but we all feel for Charlie Drake who had a good lead today, but then had a mechanical problem," said Shepheard.

"We seriously gave 101 per cent commitment in the last few stages, and it paid off. Both heats so far have been incredibly close between the top contenders and its only one muffed corner and you drop two or three places."

West Australian Tom Wilde quite literally had a wild ride in his Mitsubishi Evo X. After gaining the lead early in the heat, he slipped back to sixth before fighting back to finish the day in second position, just 4.8 seconds behind Shepheard. Expatriate Irishman Charlie Drake brought his Mitsubishi Evo IX home in third for the heat after those mechanical issues slowed him in the closing stages and robbed him of a potential debut ARC heat win.

In the Two-Wheel-Drive Championship Honda's Eli Evans took the heat win, but it was Jack Monkhouse who had the limelight midway through the day. Evans made a wrong tyre choice and paid the price slipping to second mid way through the heat. In the afternoon's final stages, Evans raced past Monkhouse to make it two from two after his Friday heat win. Evans's teammate Mark Pedder was forced to miss a stage due to differential failure during the afternoon and would finish the day in ninth.

"It was a great finish for us despite the treacherous conditions and proved that anything could happen in this sort of rally, we chose the wrong tyre part way through the day and lost time but we were able to fight back and make it two from two, it was fantastic," said Eli Evans.

"It was unfortunate for Mark Pedder to have the diff problem, we would love to have made it another Honda one-two but it wasn't to be," he added.

Neal Bates, in his new TTE replica Celica, continued to dominate the Classic Rally Challenge conceding only two stages to Jeff David's Porsche 911 during the intense day of competition across all classes in the rally.

The Rallyschool.com.au Australian Junior challenge saw Victorian Dane Berry in a Mitsubishi Evo 4 at the top of the class all day in the four-wheel-drive class leading home the Subaru of South Australian James Rodda while, as previously mentioned in the two wheel drive, the Busby-Coppin battle saw the former take the RJAC two-wheel-drive heat points.

Peter Gazzard has maintained his lead in the Australian Tarmac Rally Championship Modern with back-to-back heat wins and the Ford RS200 of Stephen Sims was the king of the Classics.

Crews face a further three stages in the final day (Sunday) of the 2012 Rally Calder presented by East Coast
Bullbars before progressing to two bonus stages in the afternoon. 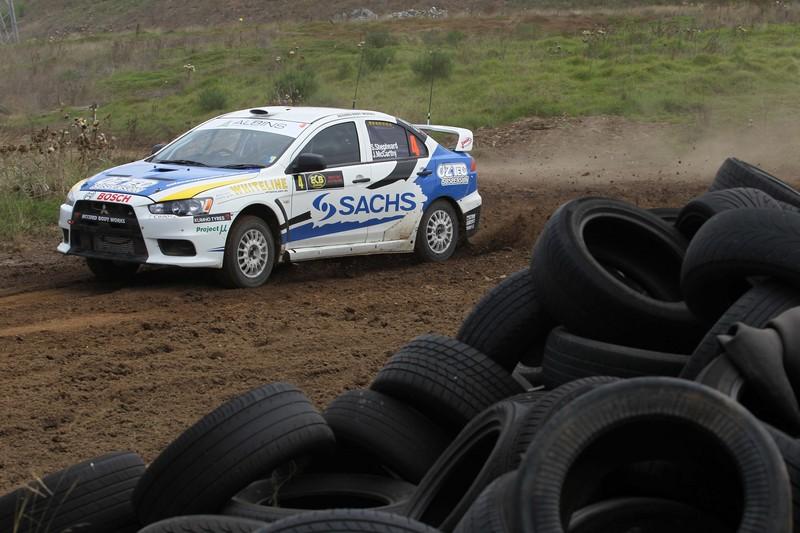