It’s taken five years to go from concept to production, but Volkswagen’s Kombi-inspired, electric-powered ID. Buzz has finally arrived, making its global debut in Hamburg, Germany, this past March, followed by its first public appearance at the New York International Auto Show in April. 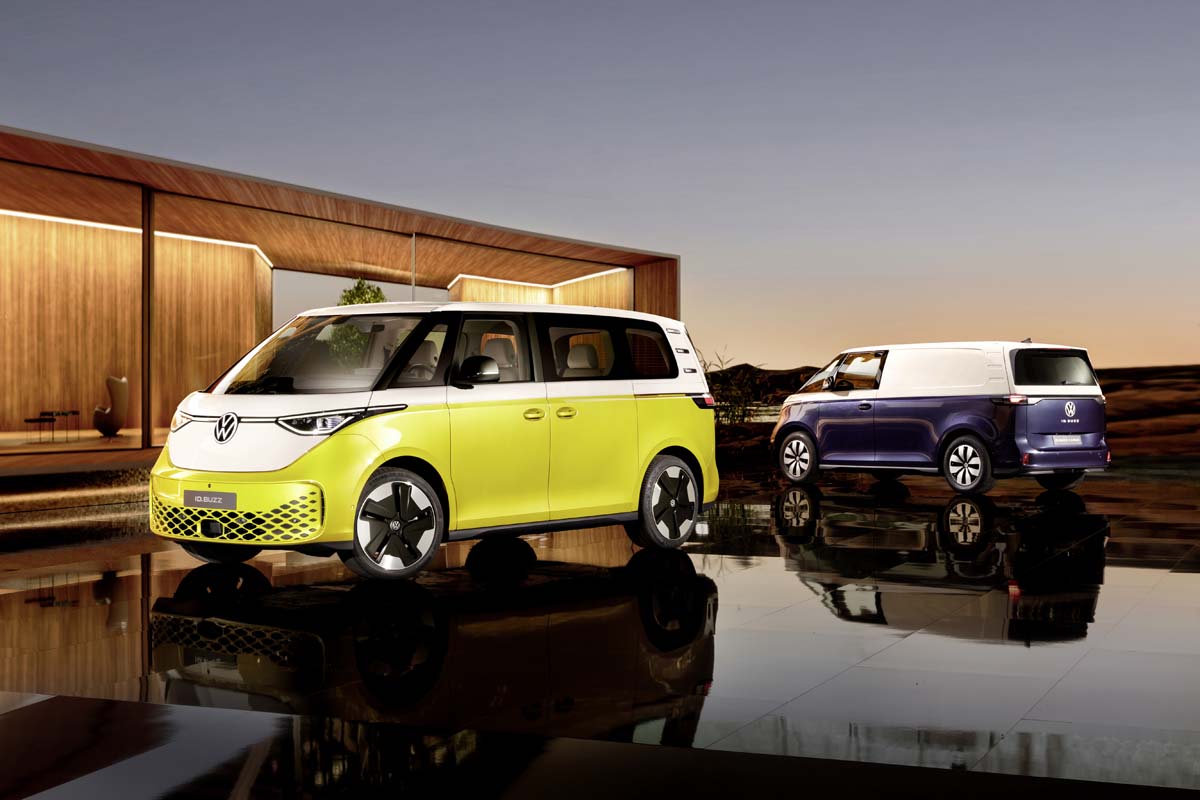 The ID. Buzz, a new interpretation of the classic Kombi (aka Bulli, aka Microbus), joins VW’s existing all-electric bus and transporter range, providing what the carmaker says is another solution to sustainable and CO2-free mobility.

“The ID. Buzz is a genuine icon for the electric era – a car the likes of which only Volkswagen can build,” said Ralf Brandstätter, Chairman of the Board of Management of Volkswagen Passenger Cars.

“In the 1950s, the Volkswagen Bulli stood for a new feeling of automotive freedom, independence and great emotion. The ID. Buzz picks up on this lifestyle and transfers it into our time - emission-free, sustainable, fully networked and now ready for the next big chapter: autonomous driving.”

Europe will the first market to receive the ID. Buzz and two variants will be offered initially – ID. Buzz and ID. Buzz Cargo – with the former being a five-seat people mover and the latter a two-seat van for delivery work. Both are built off VW’s MEB modular electric platform that’s the base for their other ID models, too. 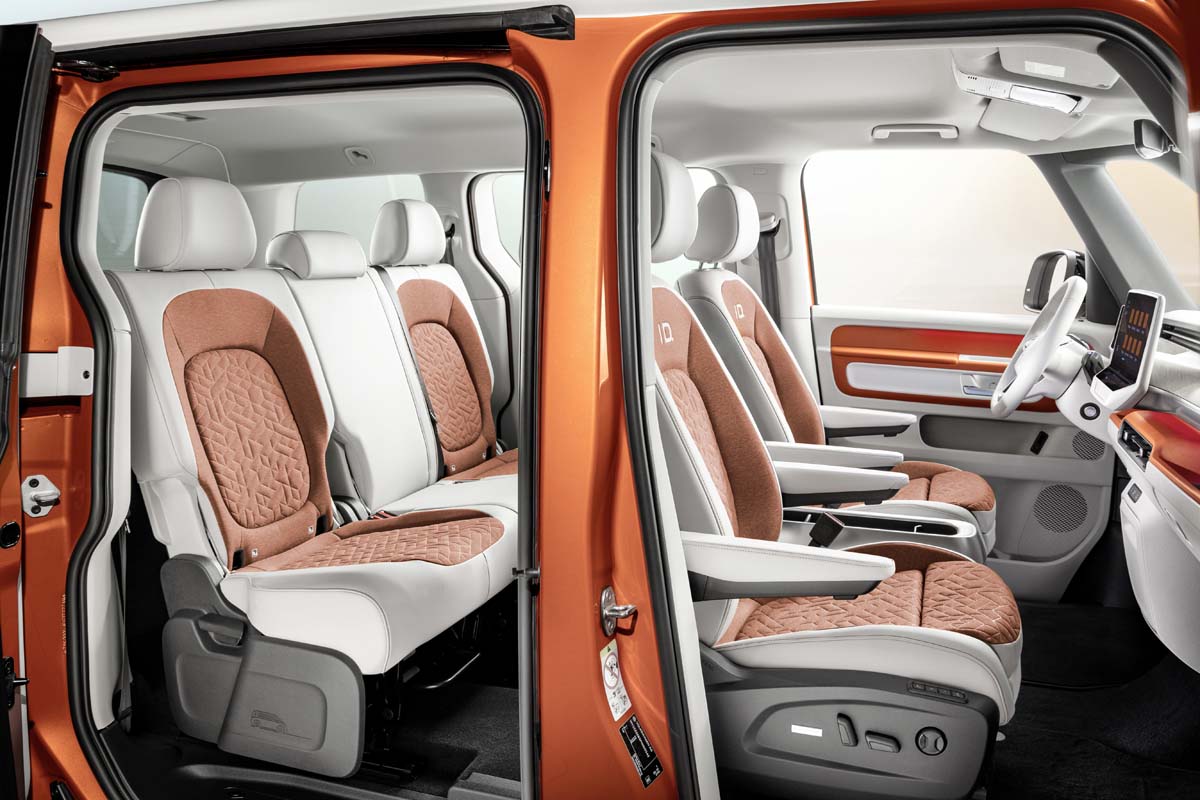 Compared to the concept that was unveiled at the North American International Auto Show in Detroit back in 2017, several changes have been made for the production version of the ID. Buzz, including being shorter and lower than the concept. 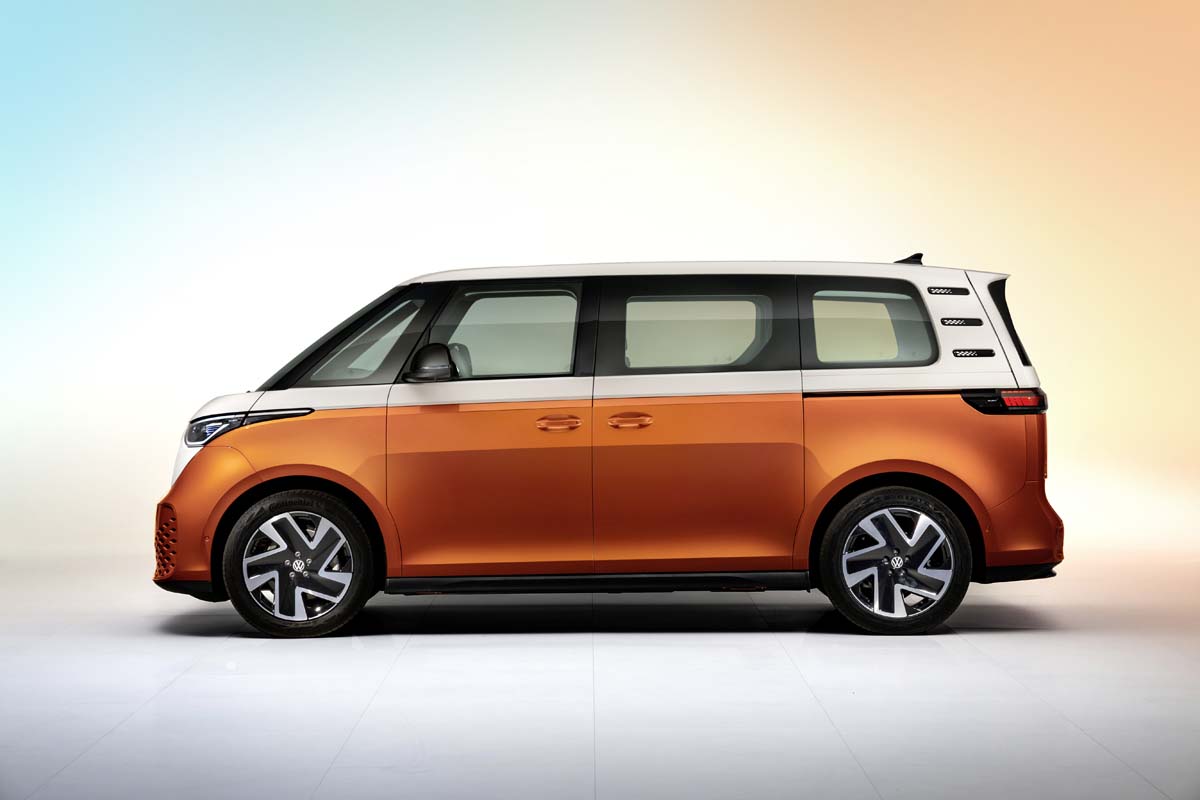 Wheelbase is 2,988mm on both ID. Buzz variants, which is comparable to VW’s current Transporter van. Despite the relatively long wheelbase, turning circle is 11.1 metres, partly due to placing the electric motor on the rear axle.

Luggage space in the ID. Buzz is listed at 1,121 litres with the second-row seats occupied, increasing to 2,205 litres when folded. The rear seats have a 60:40 split, but cannot be removed. 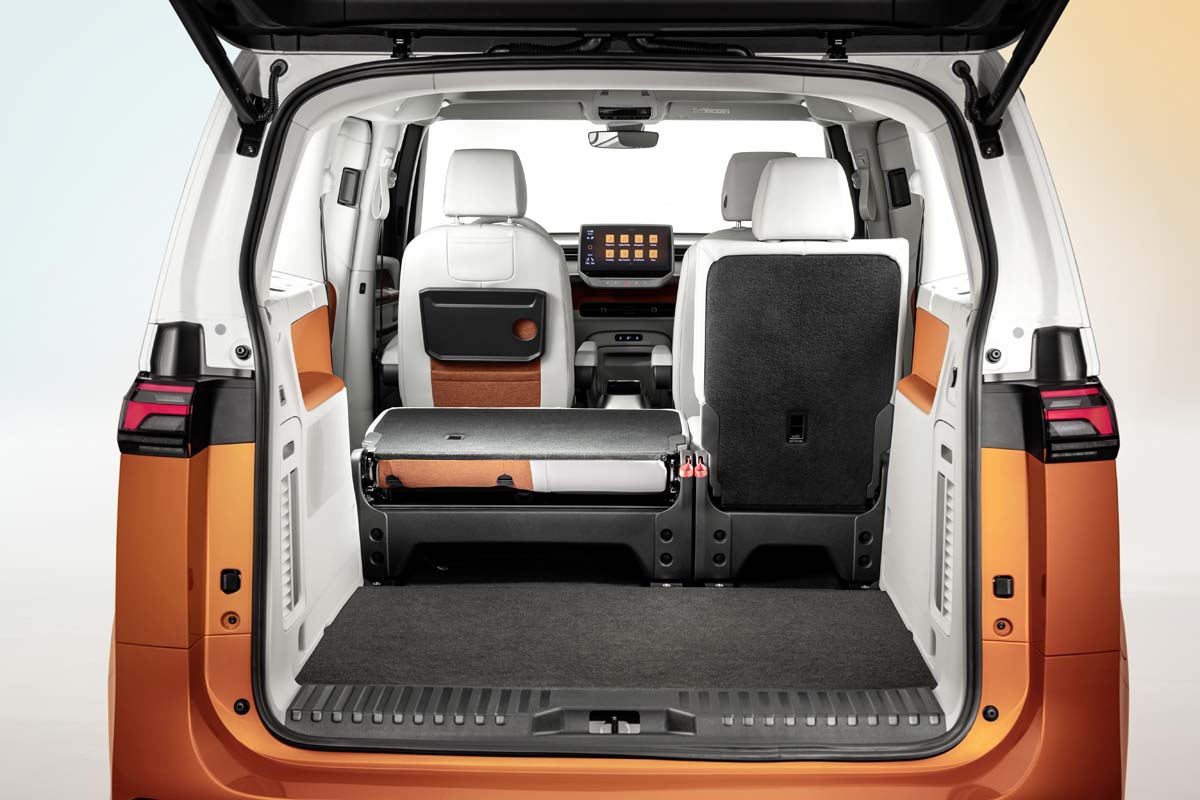 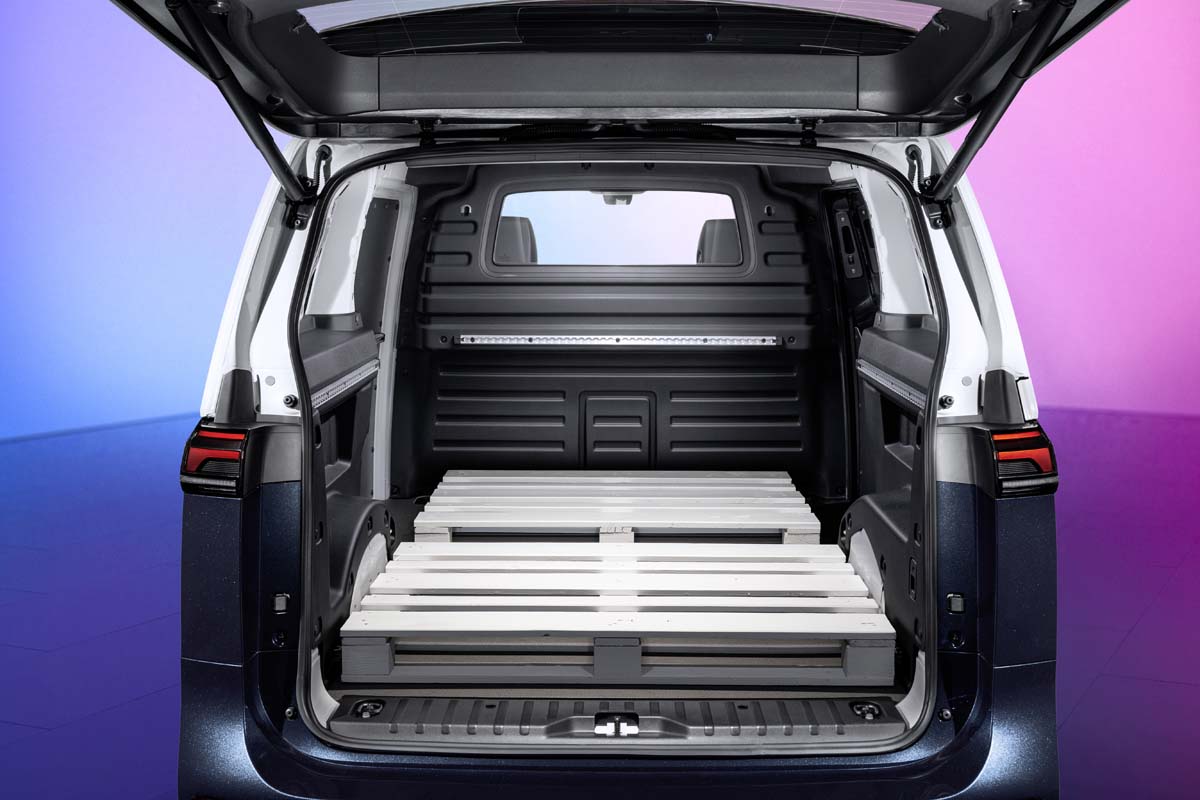 Tie-down points and rail systems for securing cargo will be standard, while various door configurations will be available to suit different working requirements.

Surprisingly, for a vehicle with such boxy dimensions, drag co-efficient is an impressive 0.285 (0.29 for the ID. Buzz Cargo) – comparable to many passenger cars. 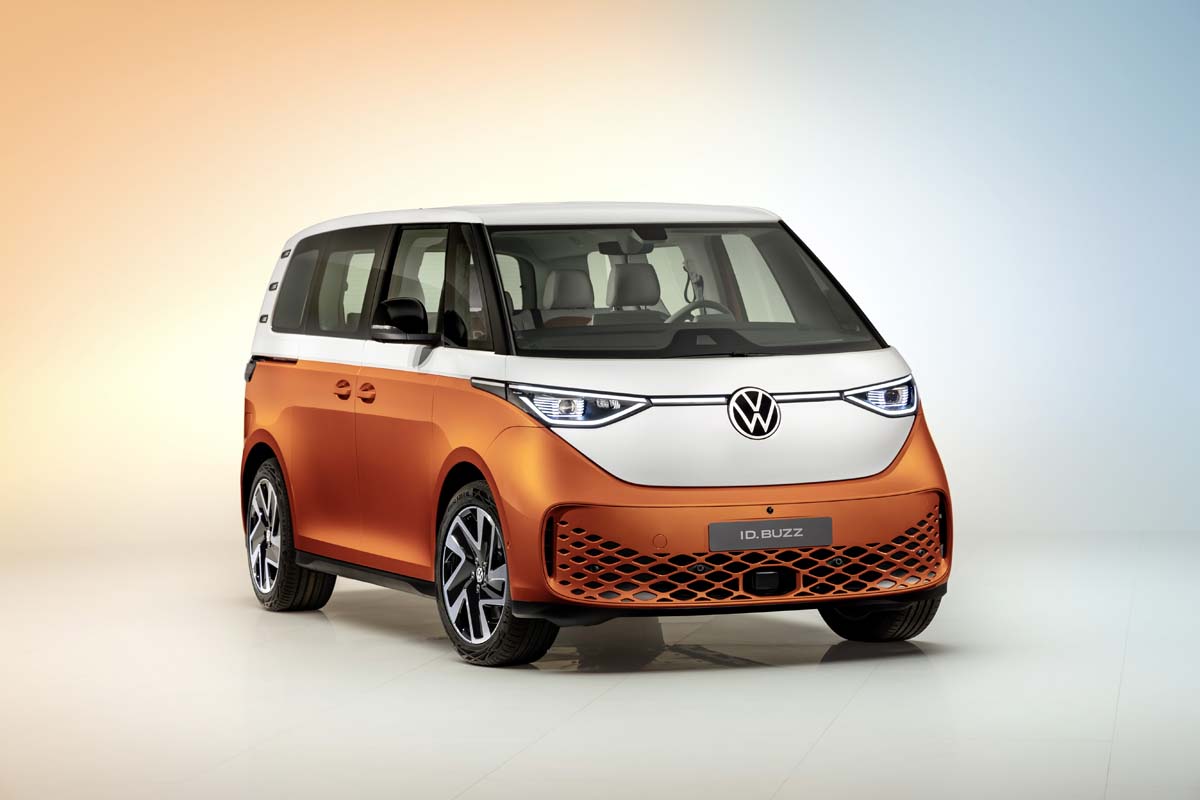 Styling on the ID. Buzz is clearly inspired by the first- (T1) and second-generation (T2) versions of the Type 2 Transporter – known as the ‘Splittie’ and ‘Bay Window’, respectively – with the two-tone colour palette, ‘V’ treatment on the front end and large VW front badge directly referencing the Splittie. 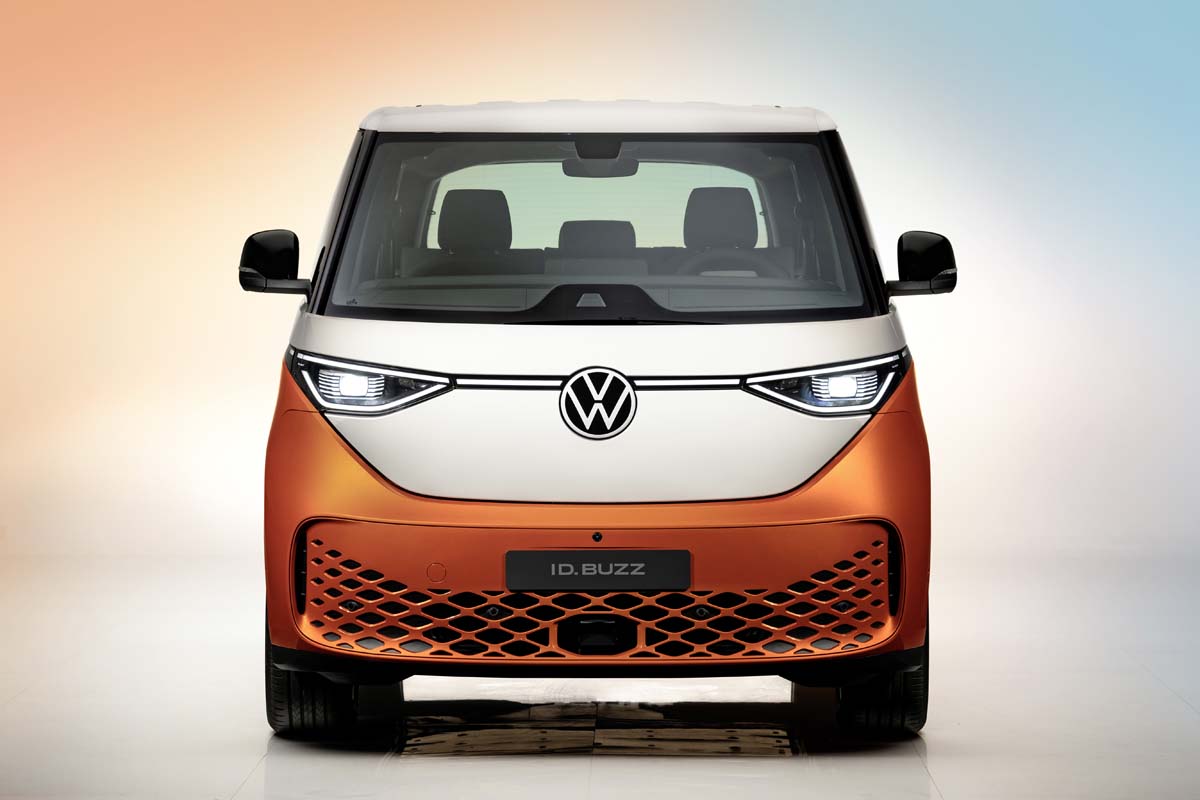 “The T1 – an icon of the 1950s – enabled people to gain mobility and freedom. With the ID. Buzz, we are transferring this T1 DNA to the present day and thus into the era of electric mobility,” says Jozef Kaban, Head of Volkswagen Design.

There are faux vents in the rear pillars of the ID. Buzz and actual vents in the low grille on both variants to provide cooling air to the battery. Sliding rear doors are standard (only one on the ID. Buzz Cargo), along with LED lighting front and rear, including Matrix LED headlights. 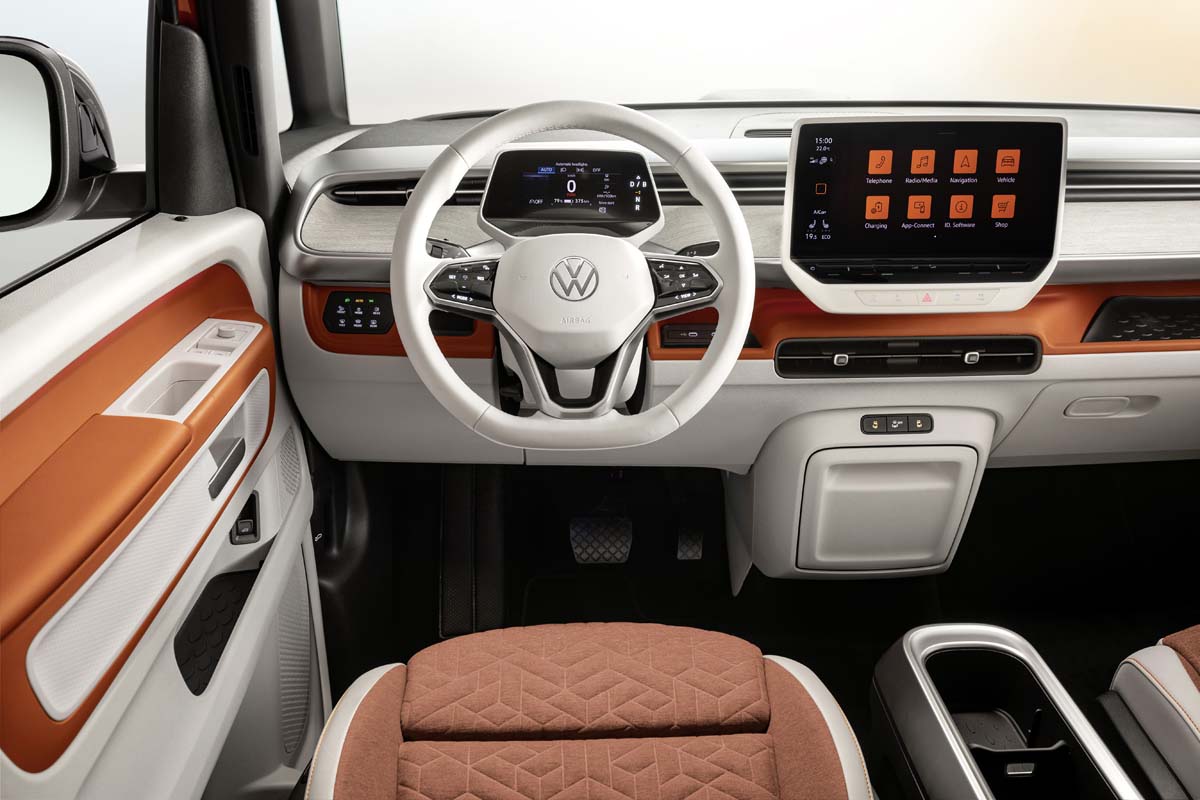 Inside, much of what’s already been applied to other ID models has also been fitted to the ID. Buzz, including a multi-function steering wheel, freestanding central touchscreen of up to 12-inch size and a 5.3-inch digital instrument display, while there will be an option to trim the interior in the same two-tone palette as the exterior.

But, for all its retro styling, the running gear of the ID. Buzz and ID. Buzz Cargo is all new. 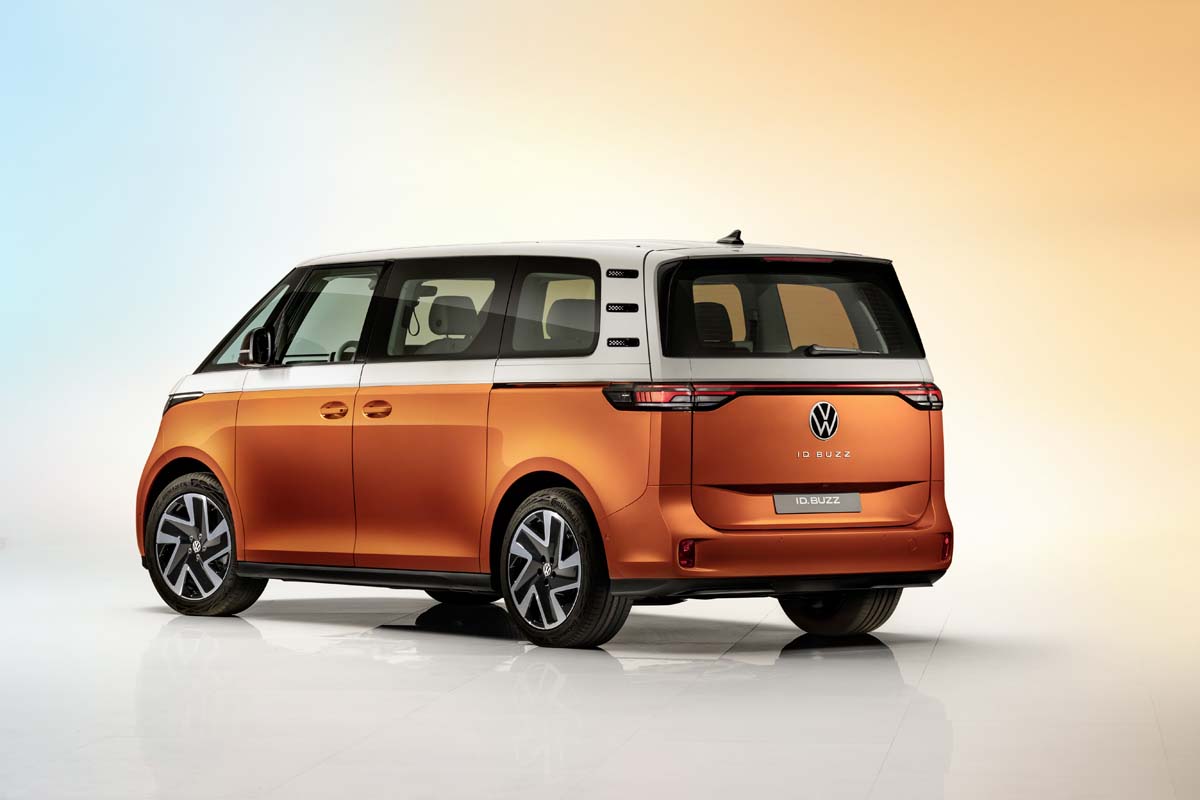 Versions of the ID. Buzz for European markets will initially be offered with a single electric motor driving the rear wheels - similar to that used on other ID models already released by Volkswagen.

Producing a claimed 201hp and 228lb/ft (150kW and 309Nm approx.), this synchronous electric motor is fuelled by a 77kWh lithium-ion battery that’s located in the floor to provide a low centre of gravity. 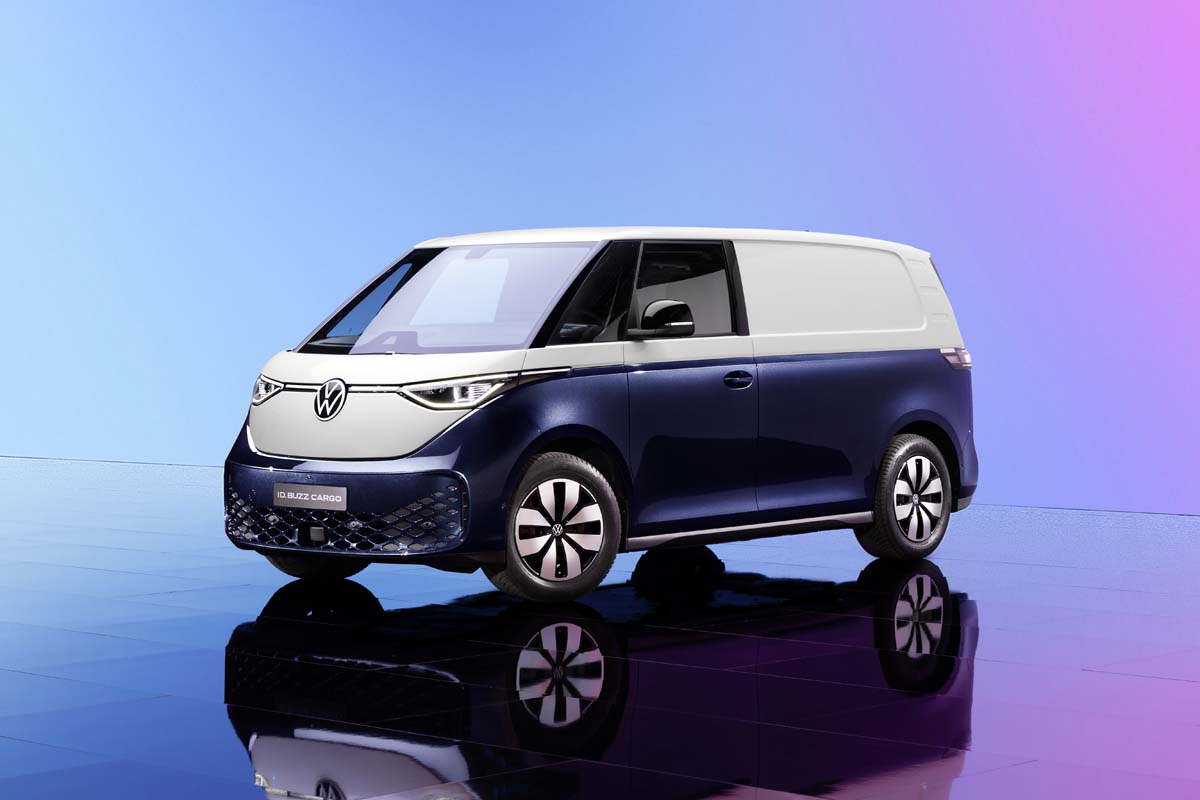 The battery can be charged off a household outlet, as well as AC and DC rapid chargers, ranging from 11kW to 170kW charging power, with a DC charger delivering 5 to 80 per cent charge in just 30 minutes.

As with other modern EVs, the ID. Buzz will feature bi-directional charging to provide household power when connected to a special domestic DC wall box.

Top speed and range have not been confirmed, but 140km/h and around 400kms from full charge (WLTP cycle) have been speculated. 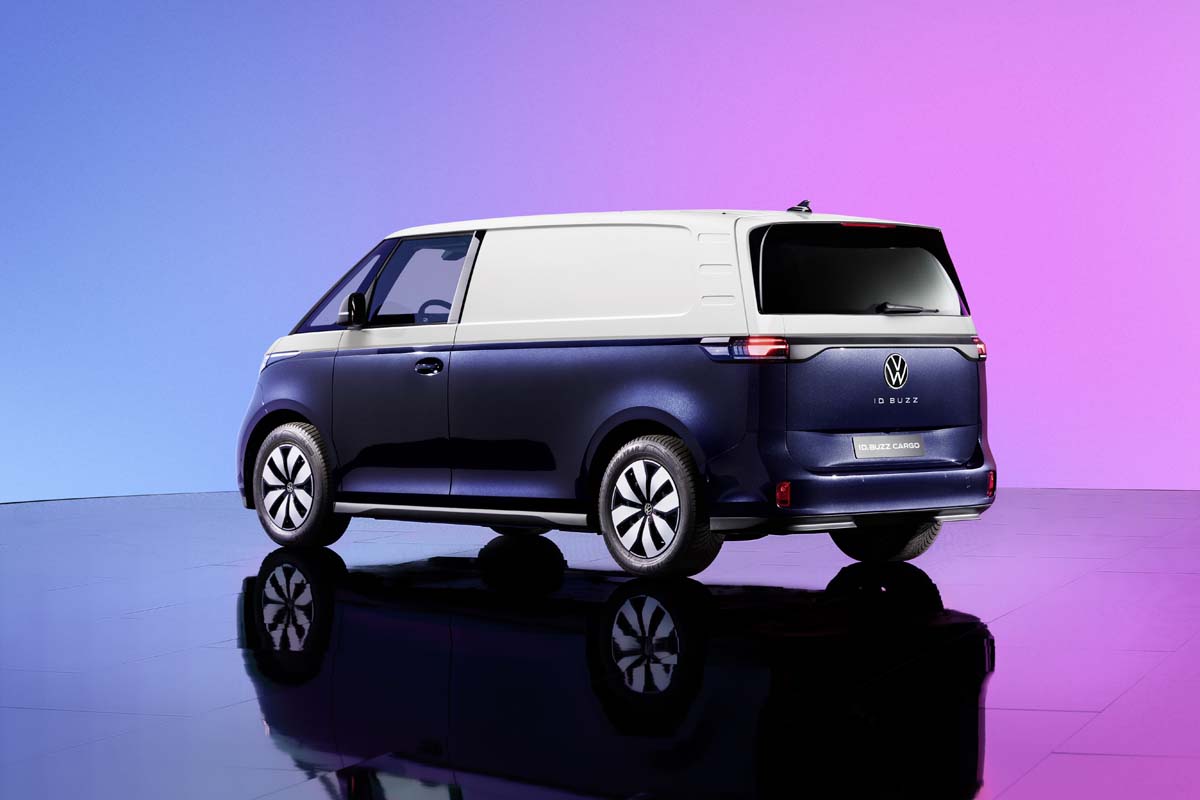 While more powerful engine options, multiple engine configurations, larger capacity batteries and all-wheel drive are all considered likely to be added to the ID. Buzz range from 2023, none have been confirmed at this stage. Same goes for a six-seater version of the ID. Buzz, a long wheelbase seven-seater and a camper variant. 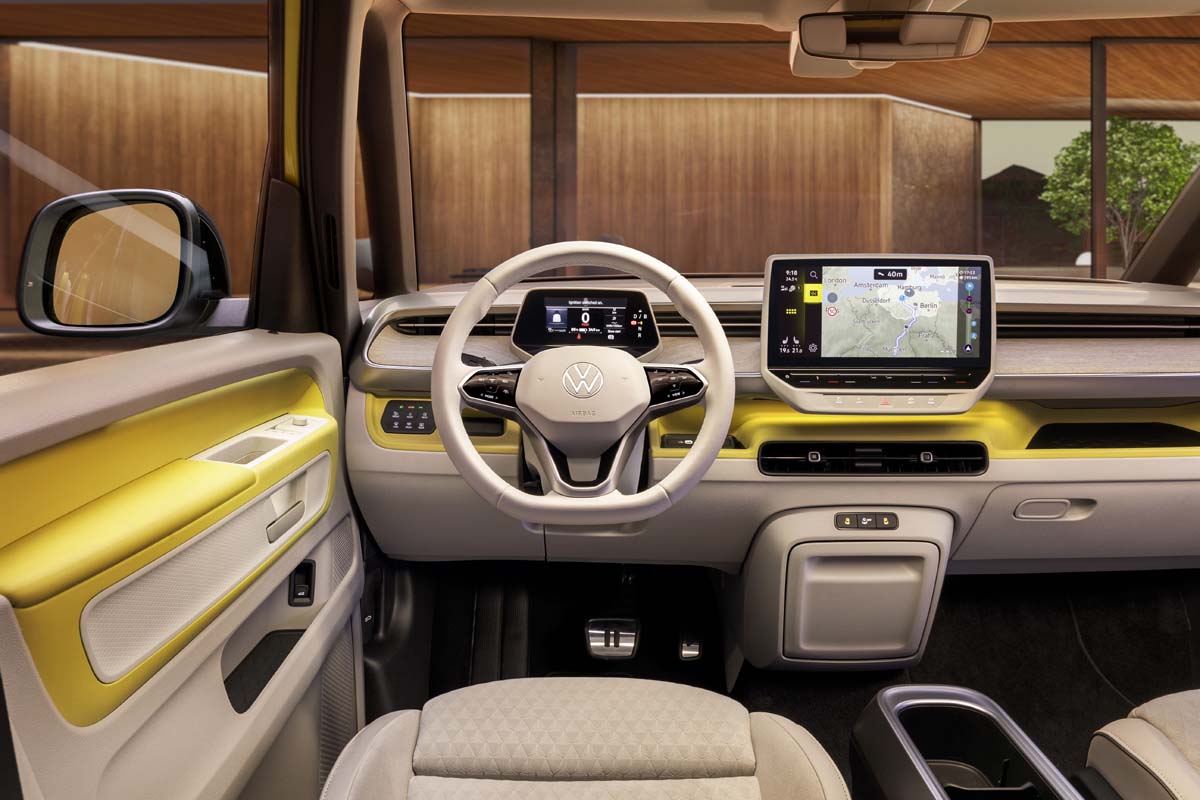 Safety and assistance system fitted as standard to both ID. Buzz variants include the full suite of VW’s existing IQ. Drive driver-assistance technologies, with some new additions, like the ‘Car2X’ warning system that uses data from other EVs and “the transport infrastructure” to identify and advise drivers of hazards in real time. Front Assist emergency braking will be fitted to both variants, with the people mover also receiving Lane Assist lane-keeping. 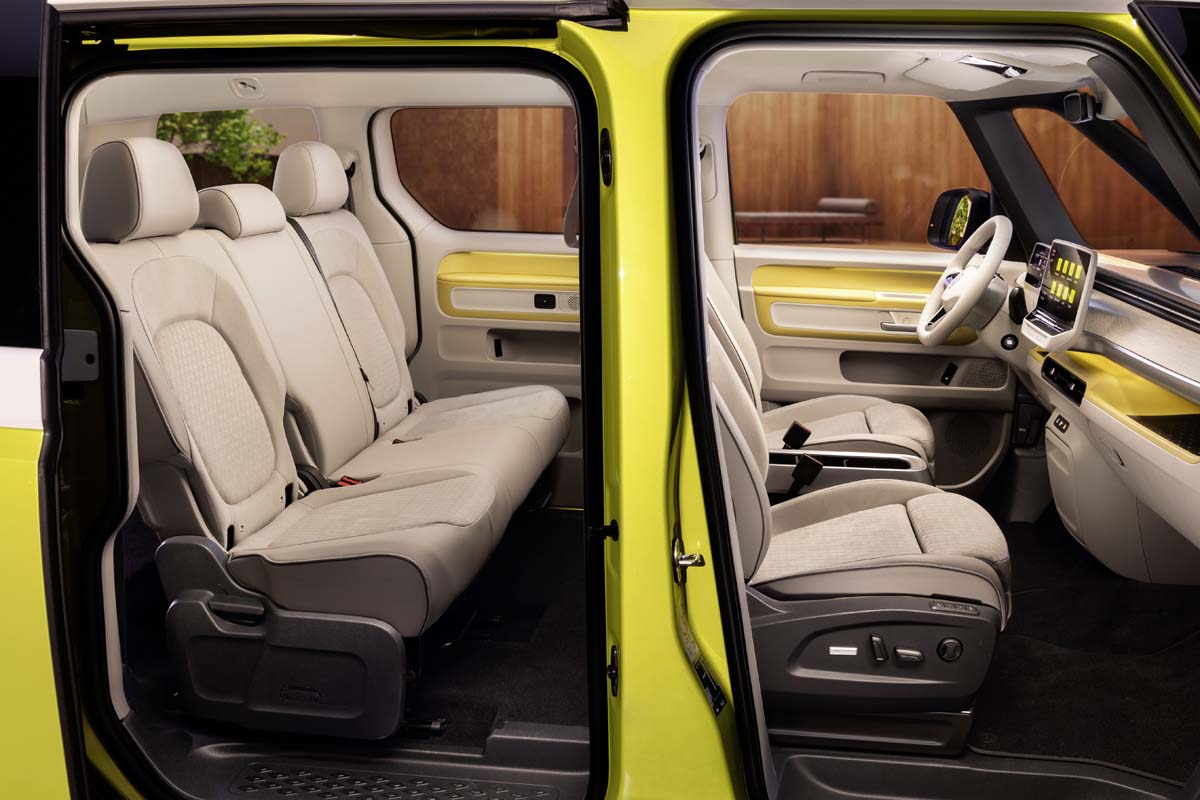 Optional ‘Travel Assist with swarm data’ facilitates partially automated driving across the entire speed range and assisted lane-changing on freeways, the latter claimed by VW to be a first. Additionally, a ‘Memory Function’ provides automated parking on a previously saved route. 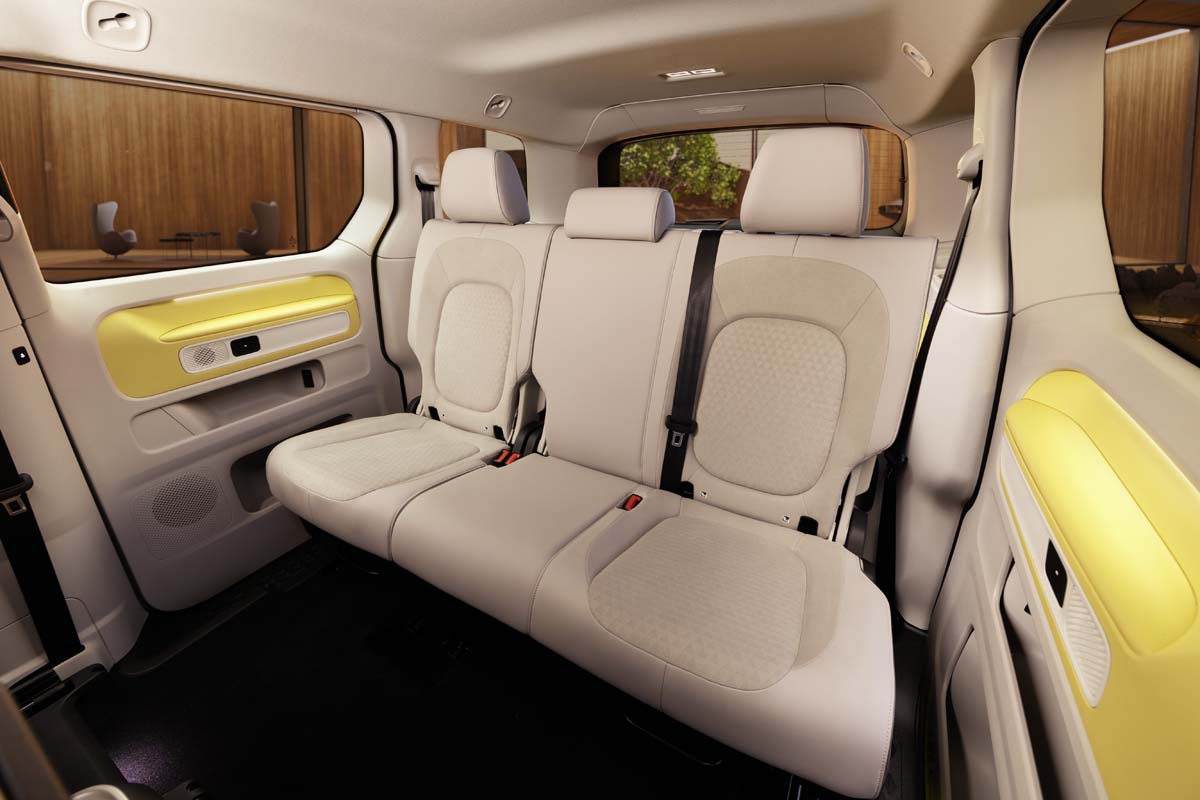 Greener from Start to Finish

The “green” credentials of the all-electric ID. Buzz and ID. Buzz Cargo extend beyond their actual powertrains, with the construction of the vehicles to be more sustainable, too.

“Both versions of the ID. Buzz are pioneering in terms of their sustainability,” said Carsten Intra, Chairman of the Board of Management of the Volkswagen Commercial Vehicles Brand. “Their manufacture and shipping has a carbon-neutral footprint. We are also using recycled synthetic materials and the interior is completely free of any real leather.” 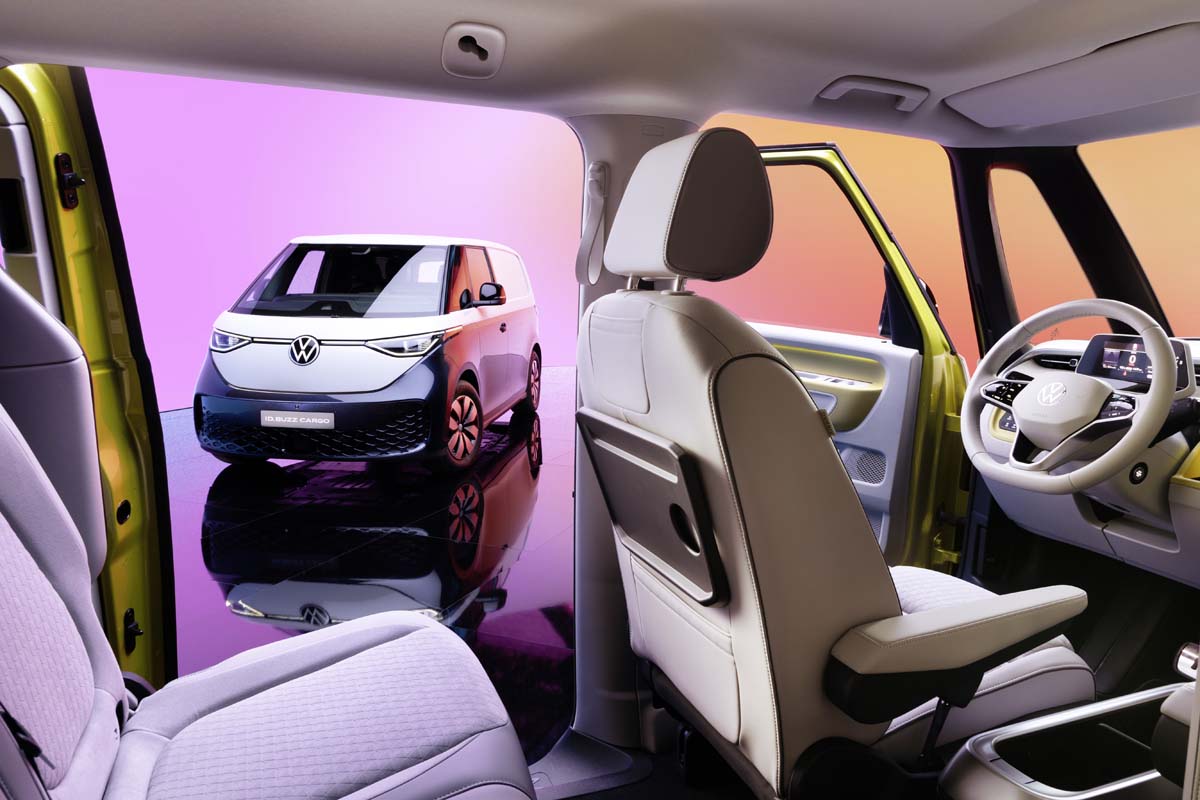 Along with faux leather for the seats and steering wheel, the headlining and floor coverings are made from recycled materials like plastic bottles and recovered ocean plastics.

According to VW, the ID. Buzz will be used for future autonomous mobility concepts, such as ridepooling, which the carmaker says is the future of inner-city transport and further improves the environment by reducing the number of vehicles on the road. 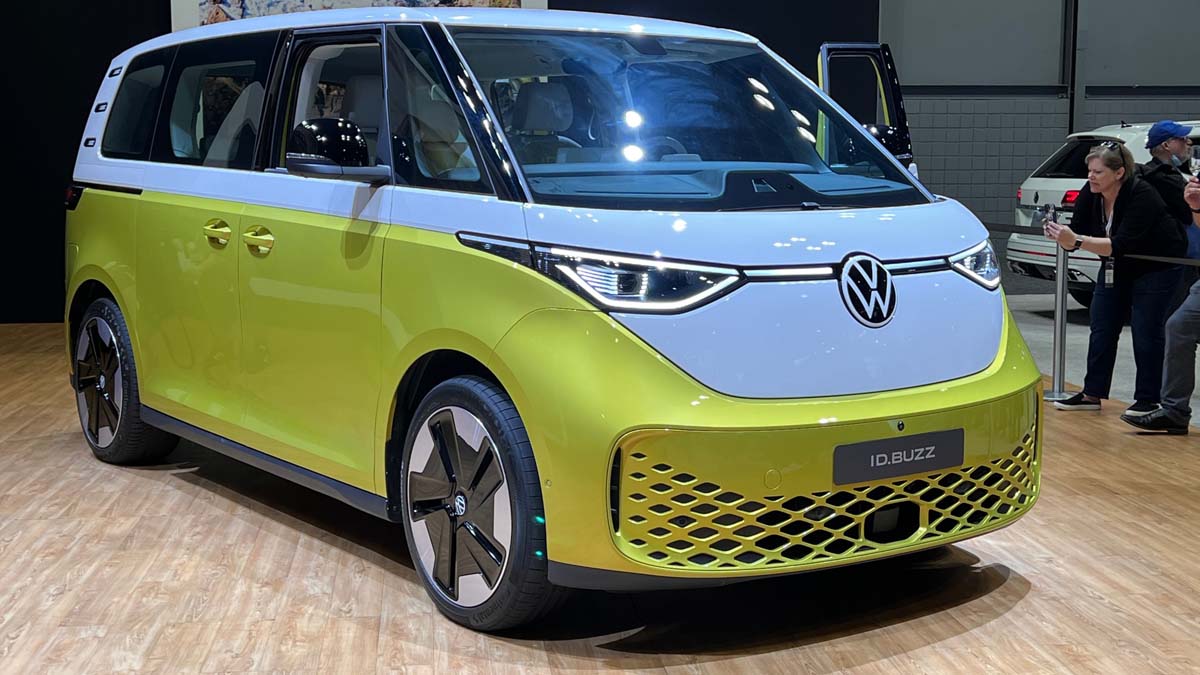 Pre-sales of the ID. Buzz and ID. Buzz Cargo for selected European markets will begin in May, with the first units to be delivered to said markets later this year.

Other European markets and North America is next on the release list, but there was no confirmation of an Australian release, let alone a release date, at time of writing. Volkswagen Australia are said to be keen on bringing the ID. Buzz to the local market, though.