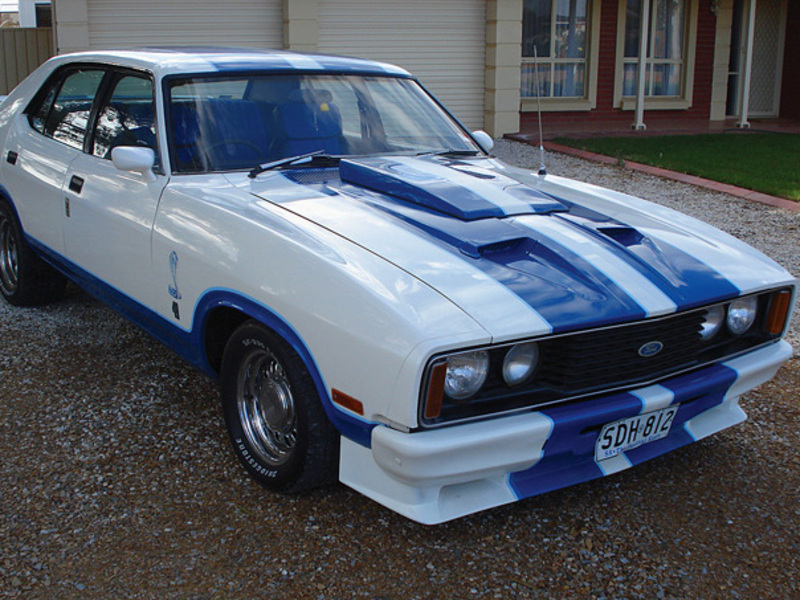 So why create a 4 door Cobra in the first place? Well, we all know only 400 of the Cobra hardtops were produced back in 1978. With only two Cobras each allocated to premium dealerships, the popularity of the hardtop meant that a lot of Ford dealers had many more orders than actual cars to sell. The solution? Well, for Bib Stillwell it was pretty simple: create a Cobra lookalike from an XC Falcon 500 sedan.

Looking at the vehicle featured, all the classic Cobra styling cues are there: white paint with twin blue 'Shelby stripes'; deep front spoiler; rear wing; bonnet bulge; and special mags. The car shown originally came fitted with Cobra-correct Bathurst Globes, but these have been replaced with 12 slots by a previous owner. JUST CARS has seen only one other Stillwell-created Cobra sedan, and it follows a similar pattern to the featured vehicle, but with a different rear wing and wheels.

The Cobra sedan isn't the only creation from Stillwell, either. We've seen examples of other XB & XC sedans and coupes that have been modified, some of which carry a distinctive 'BSS Special' badge on the bootlid. As with the Cobra sedans, the other BSS Specials seem to be décor packages only (eg. vinyl roof trim, body-colour bumpers, different wheels & tyres, etc.), in a similar vein to, although certainly not as lairy as the McLeod Ford 'Horn Cars' of the same period.

Unfortunately, information surrounding the creation of these vehicles is pretty thin. Any dealership records, including how many were made, what modifications were carried out and how extensively they were advertised - if at all - when new in 1978 was lost when dealership records from the period were destroyed. Contact with former BS Stillwell staff confirmed the dealership's involvement with the Cobra sedans, but not much beyond that, although one of the former sales managers we spoke to did get the opportunity to drive one as the reward in a monthly sales competition - and confirmed it was very cool!

On the issue of numbers, there are a few schools of thought over the quantity of Cobra sedans created by Stillwell, from as little as ten, to as many as thirty. Our contact with various Ford clubs, and information sourced from the seller of this particular vehicle, Ray Schaefer, points to around fifteen as a reasonable guess as to the total number produced. Ray believes only three or four may be in existence today.

At BS Stillwell, the car was striped up in Cobra colours and had the spoiler and wing (which appears to be a McLeod Ford item) fitted. Feedback from Cobra coupe owners indicates the front spoiler is a 'Bathurst' item, which is deeper than the factory XC Cobra spoiler and was used on the XC racecars. Some other neat touches include Cobra-style blue cloth inserts on the black vinyl seats, C-O-B-R-A lettering added to all four inside door trims and small chrome 'snakes' instead of the factory door locks.

One interesting point to note out of all of this is the attitude of Ford to dealer-optioned cars like Stillwell's. While they may not have been totally endorsed by Ford management, they certainly didn't seem to incur their wrath in the same way that Holden dealer, Neil Neilson, did over the creation of his 'El Camino' HQ sedan. (refer back to March 2009's JUST CARS for more on that vehicle). However, there are still a lot of 'blanks' to fill in concerning the history of these vehicles. So, if you have any more information on the XC Cobra sedans created by BS Stillwell in Medindie, we'd love to hear from you. Email us at [email protected], or call (03) 5225 1333.

As mentioned last issue, Ray has decided to part with the Cobra sedan in order to concentrate on the other Fords in his collection. This example is in very good condition inside and out and would be a unique and interesting addition to the collection of a Cobra aficionado, or anyone who appreciates the value and significance of rare Aussie dealer specials like this. Ray made a point about the car's rarity adding to its value, using the example of a Yenko Camaro's greater collectability than the factory equivalent. As a décor package only, the Stillwell Cobra isn't in Yenko territory, but you could argue it's just as rare as it is a bona fide dealer special, which Ray can support with documentation for the prospective buyer. Price? For something as unique as this, it's hard to put a value on. Obviously, it's not as valuable as a genuine Cobra coupe in similar condition, although one source quoted Ray a value of $100,000! That's very optimistic, but the dealership provenance arguably gives this vehicle more value than a 'backyard-built' Cobra replica. With that in mind, the asking price of $45,000 doesn't seem too bad. 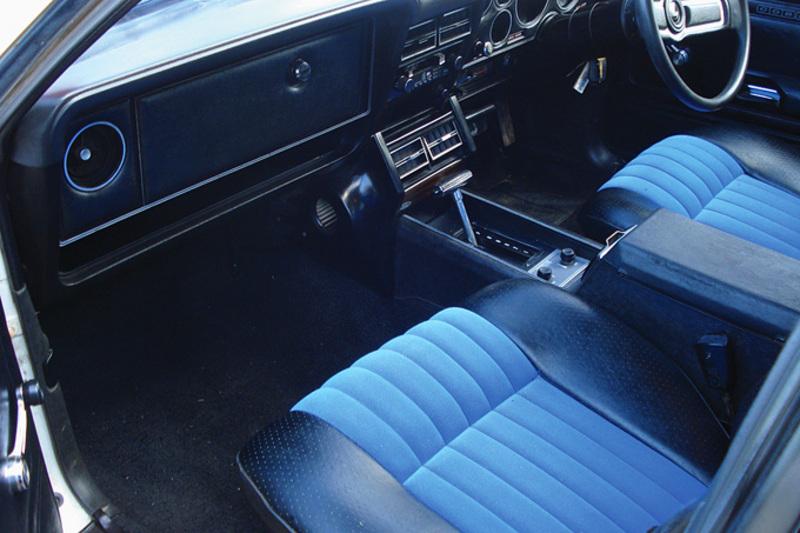 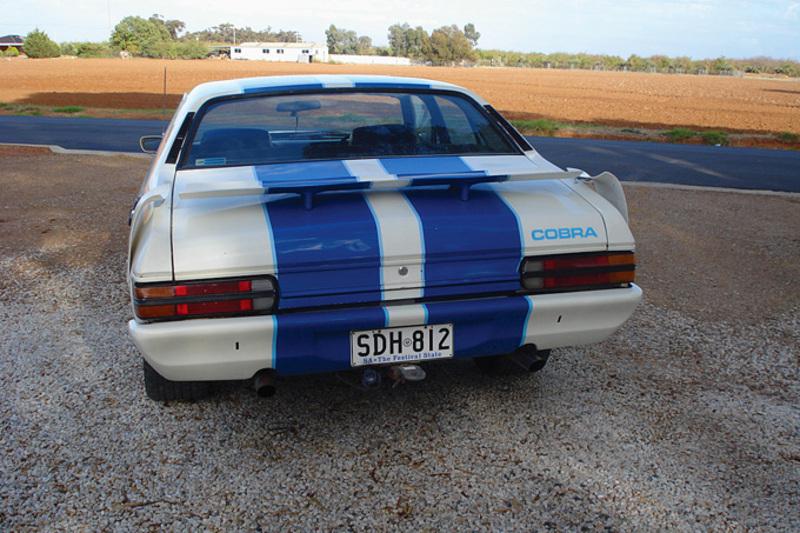 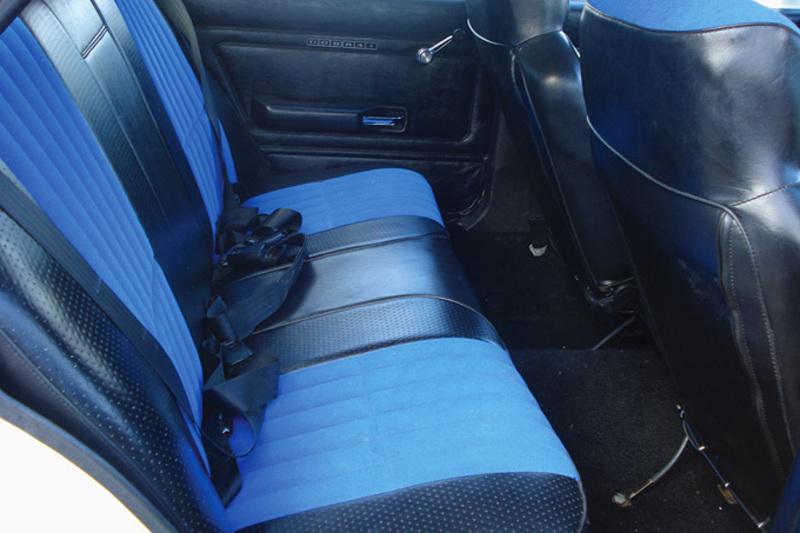 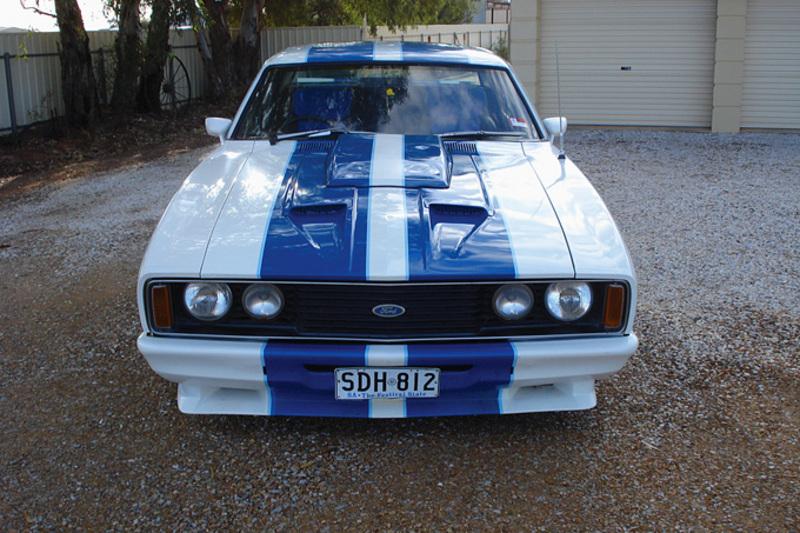