That Audi has reached this significant milestone is in itself perhaps a miracle, considering it has one of the most interesting and multi-faceted histories of any motor vehicle manufacturer.

Audi; DKW; Horch; and Wanderer. These companies are the foundation stones on which the present day Audi AG is built.

Stretching back to the 19th century, the marques of these companies were originally all based in Saxony - Audi and Horch in Zwickau, Wanderer in Chemnitz-Siegmar and DKW in Zschopau.

When these four marques merged in 1932 to form Auto Union AG. It was the second largest German motor vehicle company of its day. Four interlinked rings were adopted as its marque emblem.

After the Second World War, Auto Union AG's production plant in Saxony was expropriated and dismantled by the occupying Soviet forces. A number of the company's senior managers departed for Bavaria, where a new company under the name of Auto Union GmbH was founded in 1949 in Ingolstadt, upholding the motor vehicle tradition under the sign of the four rings.

Auto Union GmbH and NSU merged in 1969 to form Audi NSU Auto Union AG; the company was renamed Audi AG in 1985 and its headquarters transferred to Ingolstadt. The four rings remain the company's emblem to this day.

At the end of the 19th century, there were already a number of car manufacturers in Germany. One of them was August Horch & Cie., founded on November 14, 1899 in Cologne. August Horch was one of the pioneer figures of automotive engineering. Before setting up business on his own, he worked for Carl Benz in Mannheim for three years as Head of Automobile Production.

He was the first in Germany to use cast aluminium for his cars engines and gearbox housings.

Cars with two-cylinder engines were built from 1903, with four-cylinder versions being added after the start of the company's operations in Zwickau. Their performance was so impressive that a Horch car triumphed in the 1906 Herkomer Run, the world's most arduous long distance race. Two years on, the company recorded annual sales of over 100 cars for the first time.

After a disagreement with the board of directors and the supervisory board, in 1909 August Horch quit the company he had founded, without delay setting up another motor vehicle company under the name of 'Audi'.

The company which still bore the name Horch originally adhered to a range of model types, the structure of which was still the one created by the company's founder. After the First World War the company was acquired by the aircraft engine company Argus-Werke.

Two of the most renowned motor engineers, Arnold Zoller and Paul Daimler, son of Gottlieb Daimler, were appointed chief designers for Horch-Werke's operations in Zwickau.

In Autumn 1926, Horchwerke unveiled a new model driven by an eight cylinder inline engine created by Paul Daimler. This engine was notable for its reliability and refinement, and set the standard which all competitors sought to emulate. The Horch 8 became synonymous with luxury and superlative standards in automotive construction.

In Autumn 1931, Horch launched its newest product at the Paris Motor Show: a sports convertible with twelve-cylinder engine,painted brilliant yellow, with a brown soft top and upholstered in green leather. Between 1932 and 1934, only 80 of this exclusive Horch were sold. The market for such luxury cars slumped. Horch was the clear market leader in the entire deluxe class and it sold one-third more cars than its competitors; for instance, Horch sold 773 cars in Germany in 1932 and was able to export around 300. However, this was not enough. The company encountered financial difficulties, mainly due to the financing of its sales operations.

Following August Horch's departure from Horchwerke AG in 1909, he set up another motor factory. As Horch was not allowed to use his own name for this second company, he gave his new Zwickau based company the name Audi. In 1910, the first new cars with the brand name Audi appeared on the market. They earned particular acclaim for an unparalleled string of victories between 1912 and 1914 in the International Austrian Alpine Run, generally acknowledged to be the most difficult long distance race in the world. After the First World War, Audi distinguished itself by becoming the first brand to position the steering wheel of its production cars on the left and to move the gear lever to the centre of the car. This resulted in much easier operation. 1923 was the year in which Audi's first six-cylinder model made its appearance. This car had an oil-wetted air cleaner, at that time definitely the exception. It was years before the air cleaner became a standard feature on all cars. This Audi also boasted one of the first hydraulic four-wheel brake systems to be used in Germany, designed and built by the company itself. In 1927, chief designer Heinrich Schuh brought the first Audi eight-cylinder model, known as the "Imperator", onto the market. Unfortunately, this imposing car made its appearance too late: the deluxe car market was suffering a rapid decline in fortunes. The company was purchased in 1928 by Jörgen Skafte Rasmussen, the figure behind the mighty DKW empire.

Jorgen Skafte Rasmussen, a Dane by birth, established his first company in Saxony. In 1904 he set up an engineering company and experimented with steamdriven motor vehicles in 1916. Although these experiments did not lead to any specific product, they yielded the company name and trademark DKW, derived from the German words for "steam-driven vehicle" (Dampf Kraft Wagen). In 1919, Rasmussen obtained the design of a two-stroke engine from Hugo Ruppe, a tiny version of which he sold as a toy engine under the name of "Des Knaben Wunsch", meaning "The Boy's Dream". This mini engine was subsequently upscaled and used as an auxiliary cycle engine, evolving into a fully fledged motorcycle engine called "Das Kleine Wunder" (The Little Miracle) in 1922. DKW became the biggest motorcycle manufacturer in the world in the 1920s. DKW also enjoyed a leading international position as an engine manufacturer.

In 1927, Rasmussen had acquired design and production facilities for six- and eight-cylinder engines from a Detroit automobile company which had been wound up. Two new Audi models powered by these engines appeared on the market. However, Rasmussen recognised the signs of the times and stepped up his activities in small cars. The very first DKW cars actually had rear wheel drive and were built in Berlin-Spandau. At the end of 1930, Rasmussen commissioned the Zwickau plant to develop a car having the following design features: a two-cylinder, two-stroke motorcycle engine with a swept volume of 600 cc, a unitary wooden chassis with leather upholstery, swing axles at the front and rear, and front-wheel drive. The car which Audi designers Walter Haustein and Oskar Arlt came up with was given the name DKW Front. It was unveiled at the 1931 Berlin Motor Show, where it caused something of a sensation. The DKW Front was built at the Audi factory, and went on to become the most produced, most popular German small car of its day.

The name "Wanderer" dates back to 1896, when its fame was associated with the bicycles built by Winklhofer & Jaenicke, acompany founded in 1885 in Chemnitz. Production of motor-cycles commenced in 1902, and the first trial production of motor cars took place in 1904. A small car under the name of "Puppchen" went into series production in 1913, and proved very popular. No higher performance successor appeared until 1926, when the Wanderer Type W 10 with 1.5 litre engine and developing 30 hp made its début. This car incorporated all the latest developments in the world of automotive engineering, such as left-hand drive and a central gear lever, a multiple dry plate clutch, a unitary engine block and gearbox, and a four-wheel brake system. This car met with an excellent market reception.

To cope with the overwhelming demand, a new production plant was built in Siegmar. Parts continued to be produced at theexisting factory, and were then transferred to the other plant by rail. Individual parts and assemblies were unloaded directly from the rail wagons onto the assembly line.

The buffer store in Siegmar had capacity for parts for only 25 cars – as many as could be built in a single day.

Wanderer's marque image was characterised by its extremely reliable cars and by their outstanding manufactured quality. Such excellence had its price, however, and at the end of the 1920s Wanderer attempted to stem the looming crisis with more modern body designs and higher performance engines.

Despite these innovations, production figures slumped. Wanderer's car production operations fell into the red. The entire motorcycles division had already been sold off to NSU and the Czech company Janecoek. This prompted Dresdner Bank, Wanderer's largest shareholder, to promote plans to sell off the automotive division and to expand the profitable machine tools and office machinery operations.

In common with the automotive industry as a whole, the 1920s were a period of rationalisation at Audi, Horch, DKW and Wanderer. Line assembly and modern machine tools had resulted in a sharp rise in production capacity, yet mass production could only work if there was corresponding market demand.

Promoting sales to the necessary degree was a costly affair, and the price war triggered off by stronger competition from abroad also devoured large amounts of money. The German car industry found itself frequently unable to finance all this from its own profits, and sources of credit were needed.

In Saxony, the State Bank of Saxony had more or less satisfied Horchwerke's needs for capital loans, and had also paved the way for the expansion of the Rasmussen Group. The State Bank of Saxony eventually resolved to consolidate its interests in the automotive trade, and the idea of Auto Union was born. The absorbing company was Zschopauer Motorenwerke J. S.

Rasmussen AG, which already owned Audiwerke AG. Horchwerke AG was also placed under its control, as was Wanderer Werke's car division through a purchase and leasing agreement. Its share capital totalled 14.5 million Reichsmarks, with the State Bank of Saxony controlling an 80% interest. 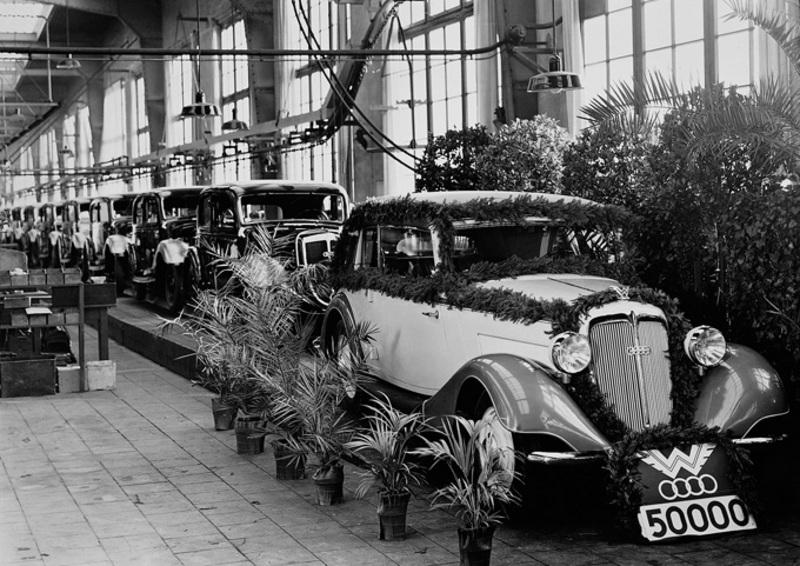 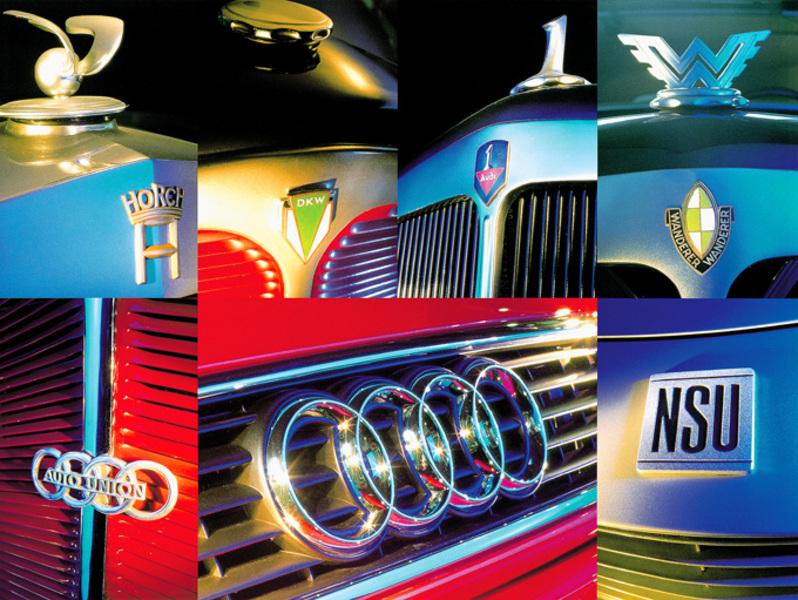 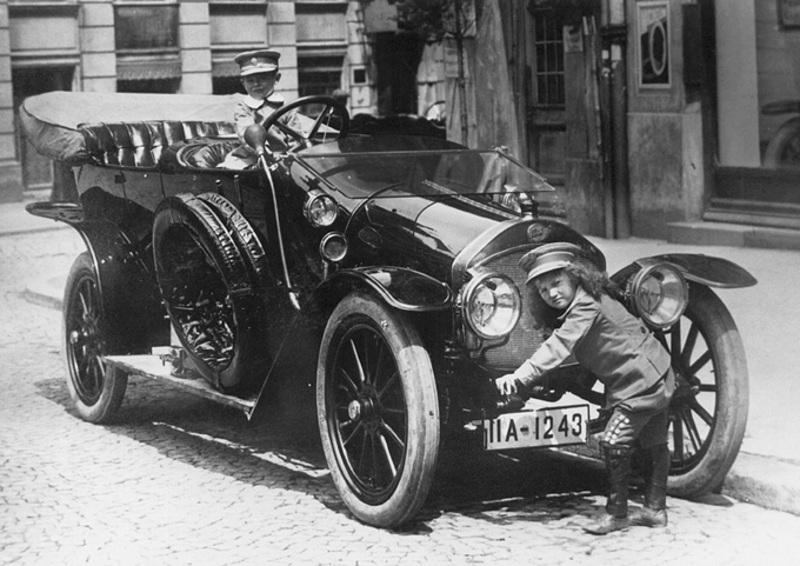 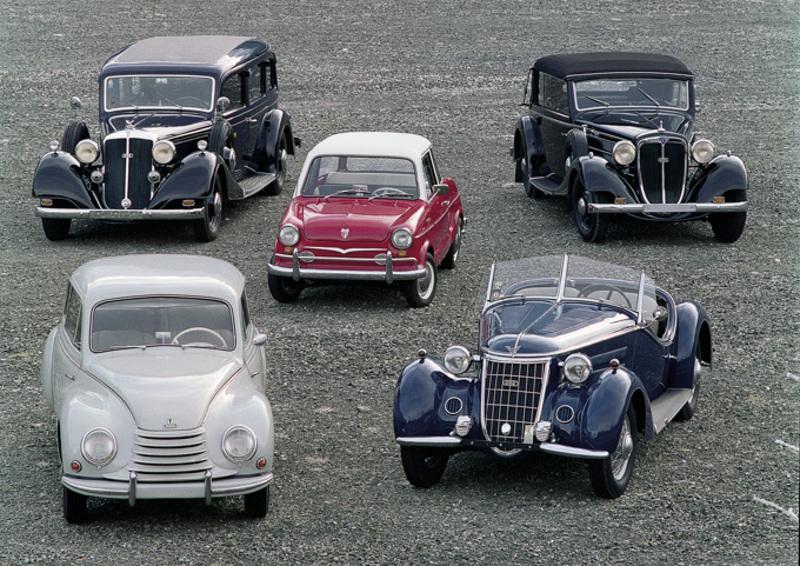