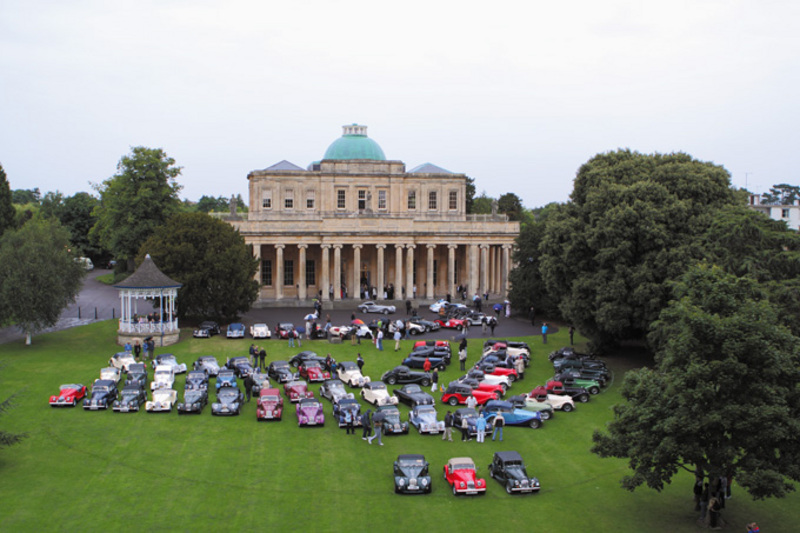 JANUARY
Following a special new year's eve party for more than 200 Morgan staff, dealers, suppliers and customers - complete with Morgan champagne! - the centenary festivities got off to a chilly start on January 2nd, when the first customer cars of the Centenary were handed over, followed by a brunch for 120 guests at the Malvern factory's newly-opened visitor centre.
On January 5th, Charles Morgan unveiled special centenary flags at the factory gates, in front of the company's 120+ workforce. The flags flew throughout 2009.

MARCH
In March, Morgan announced their support for UK charity, 'Children in Need' by offering a specially prepared and painted 4/4 Sport model for the charity to raffle off throughout the year. The one-off 4/4 featured special pearlescent white paint, as well as signatures of more than 20 UK celebrities, including such motoring identities like Stig Blomqvist, Andy Green, Richard Noble, Chris Lawrence, Allan McNish and many others.

APRIL
Morgan were graced with a Royal Visit on April 17th, when HRH the Princess Royal toured the Malvern factory and got an up-close look at the new Aero SuperSports.

MAY
On April 18th & 19th, the 'Repton to Malvern Scenic Run' retraced a pivotal route in early Morgan history.
The significance of the tour dates back to when HFS Morgan built his first cyclecars, which were assembled at Repton College and driven to nearby Malvern College. The Repton to Malvern Run also saw the debut of the recreation of the first Morgan cyclecar. Built by a team led by Chris Booth and accurate down to the Peugeot single cyclinder engine, the 1909 replica was a special way to mark the centenary.
The following weekend, on April 24th, Morgan was showcased at the annual Concorso d'Eleganza Villa d'Este on the shores of Lake Como in Italy.
Along with a selection of classic Morgans, Morgan brought along their newest creation in the form of the Aero SuperSports, a cabriolet-style redesign of the limited edition AeroMax coupe.
The Aero Supersports was presented to the concours judges, which included the likes of Lord March and Patrick le Quement. Morgan kicked off the 2009 European GT3 championship season in the best possible way, winning both races at the Silverstone season opener.
The French-based Auto GT team were running Aero SuperSports GT3 cars for the first time, after previously campaigning Aero 8 GT3s.
On May 16th, Vancouver's 24th annual British Classic Car Show turned out a good selection of Morgan classics, with Plus 4s, Plus 8s and Roadsters covering many decades, as well as a small number of beautifully-restored early three wheelers.
Back in the UK, on May 17th, members of the Morgan LeMans 62 Owners Club joined many other Morgan owners for the Waddesdon Manor Morgan Meet. Held in the grounds of the stunning French Renaissance-style Waddesdon Manor in Buckinghamshire, almost 150 Morgans of all types were on display.
May closed with action from the USA, where the ex-Lew Spencer 'Baby Doll IV' Morgan Plus 4 Super Sports won its class at an SCCA classic sports car race at Laguna Seca, while Morgans were also in action at Australia's own Historic Winton event on May 30th & 31st.

JUNE
Owners and enthusiasts had some fun without their Morgans at the start of June, when a number of teams competed in 'Wipeout'-style zany challenges for the official Morgan Centenary Family Fun Day on June 6th.
Morgan's presence at the Malvern's annual Three Counties Show saw some equally spectacular - and frightening - action for a few Morgan owners when Aussie stunt rider, Matt 'The Kangaroo Kid' Coulter jumped his quad bike over a lineup of Morgans. Thankfully, no Morgans were harmed!
Over _3,000 worth of tickets for the charity raffle Morgan were sold, and the factory displayed a number of production models in promotion of the main centenary celebrations in August.

JULY
The Goodwood Festival of Speed has already been well documented in these pages, but it did feature a number of significant Morgans, most notable of which was the Triumph-engined Plus 4 made famous by Chris Lawrence when he and Richard Sheppard-Barron won their class at the 1962 Le Mans 24 Hour Race.
That car - TOK 258 - was in action at Goodwood, along with some of the latest Morgan Aero SuperSports racers currently campaigned by the French Auto GT team in the FIA GT3 European championship. A number of rare and classic Morgans were also on static display.
Malvern hosted a welcome for Morgan owners and enthusiasts on July 24th, marking the official start of the main Morgan centenary celebrations.
This was followed by the Prescott Garden Party on July 25th & 26th. The Hillclimb at this event is what draws motoring enthusiasts of all persuasions, and Morgans turned out in droves for a chance to tackle the Prescott hillclimb course, more than 1500 runs up the hill conducted without incident.

AUGUST
After a number of events that included steam train charters, racing at the Castle Combe circuit. auto tests at historic Madresfield house and a centenary golf tournament, the big one kicked off at Cheltenham racecourse on August 1st.
Over 3200 Morgans, representing 18 different countries, were on show and in action, as part of the 'Party In The Park' festivities.
Everything from Morgan scalextric racing and live music, to competitive events and Morgans stripped bare!
Saturday evening's Gala Dinner at the racecourse's 'Centaur' facility was opened in style when Charles and Kira Morgan arrived on stage in a bright orange Aero 8. Morgan then proceeded to interview some of the special guests - Lord Montagu of Beaulieu, Prince Eric Sturdza (the inspiration for the AeroMax) and Richard Hammond - amongst the more than 1,000 attendees.
A visual highlight of the dinner was a quartet of Morgan roadsters suspended from the ceiling, their headlights shining on a dancefloor that saw plenty of action throughout the night!
The festivities continued on August 2nd, with a concert and huge fireworks display.
Next on the list was the Pebble Beach Concours d'Elegance, held on August 16th, as part of the weekend-long Retro Auto festival.
After leading a parade of Morgans on the Tour d'Elegance to the historic Carmel Mission, Morgan also served as an honorary judge for the Concours, where Morgan was one of the featured marques.
A special 'Class N' was created for this year's concours, exclusively for Morgan cars.
There were a lot of quality machines to pick from, but the award went to Brian Pollock's 1937 Sports 3 wheeler. The international appeal of Pebble Beach was evidenced by the runner-up, Machiel Kalf's '65 Plus 4 which came all the way from the Netherlands. Third place in Class N went to a 1952 4/4.
Morgan shipped over the LIFECar, 1909 replica and the latest Aero Supersports coupe especially for Pebble Beach. As this event is attended by so many opinion makers in the auto industry, it's a valuable one to be a part of.
Morgans were also being celebrated in France over the northern hemisphere Summer, with the 'Ecurie Morgan France' holding a display and dinner at the Chateau de Saran, the home of Moet & Chandon champagne.
Once again, Charles Morgan was there to help the French Morgan fans celebrate.

SEPTEMBER
The Morgan display at this year's Goodwood Revival, from September 18th to 20th, took a different tack by focusing on one of the lesser lights from the Morgan stable in the form of the Plus Four Plus fixed head coupe.
With a requirement to theme their display sometime between 1946 and 1966, Morgan chose 1963, specifically, October 4th, the date of the first Autocar magazine road test of the Plus Four Plus.
While a finished example was on display outside, employees from the Morgan chassis shop built rolling chassis each day - with body shell alongside to make it look as though they were building a genuine Plus Four Plus of the early 1960s.

OCTOBER
Australia's turn came on October 9th to 12th, when the Morgan Owners Queensland Inc. hosted the Morgan Centenary Tour. See next month's JUST CARS for a full report from this event.
On October 10th, the Morgan family, factory employees, centenary committee as well as members of the Morgan Sports Car and Three Wheeler Clubs came together for a Thanksgiving Service at Great Malvern's Priory Church, where a 1931 model three wheeler was displayed inside the church.
The theme was 'family' and Charles Morgan made a special speech to all those who attended.

NOVEMBER
Morgan's centenary year was capped off in fine style with the company winning the 'Manufacturer of the Year' award in the automotive category. Morgan Production Director, Steve Morris and his team were proud to receive the award, presented by Sir Jackie Stewart on November 12th.
The presentation of the 'Children in Need' raffle Morgan (see below) capped off what has been a very big, very busy year for Morgan. Here's to the next 100!
Next Issue - classic Morgan replicas

Morgan's New Wings
In 2009, Morgan unveiled their 'new wings' in the form of a modernised version of the traditional Morgan 'wings and wheel' badge that has been gracing Morgans for decades.
In a press release announcing the new logo (shown below with old logo in corner), Morgan said that, for some time, they have felt the look and feel of the Morgan company logo hasn't done justice to their unique combination of traditional skills, yet thoroughly modern approach to design and production in today's challenging world.
Conscious of the tradition that's a major part of the brand, the change is more an evolution than a revolution.
The design has the blessing of the Morgan family, Board of Directors and Management team and now adorns most new Morgans, as well as the website and all company literature.

Morgan 4/4 raffle
As part of the centenary celebrations, Morgan produced a unique 4/4 Sport model to be raffled for UK charity, 'Children In Need'.
Painted in a unique pearlescent white and with more than two dozen signatures of UK celebrities on the bonnet, tickets for the special 4/4 went on sale in March. The draw took place on November 20, with Les Powell announced as the lucky winner. The raffle raised $50,000 for Children In Need. 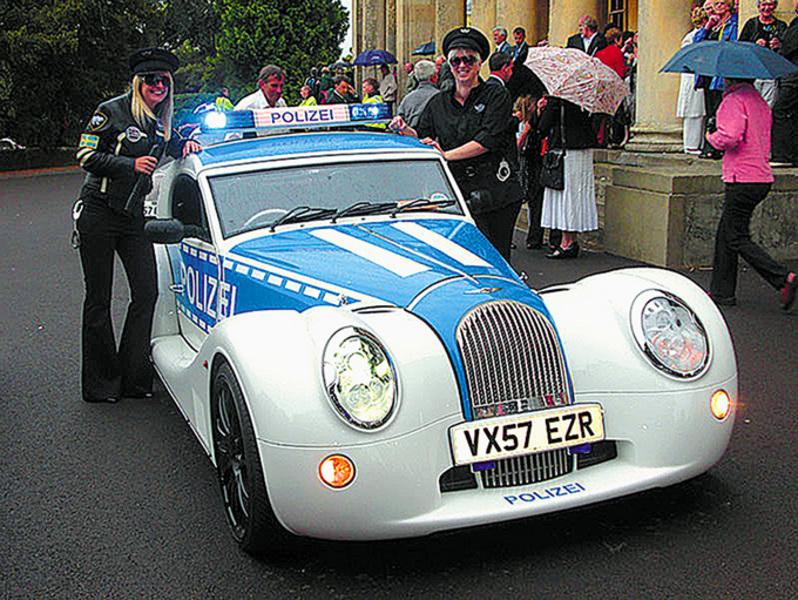 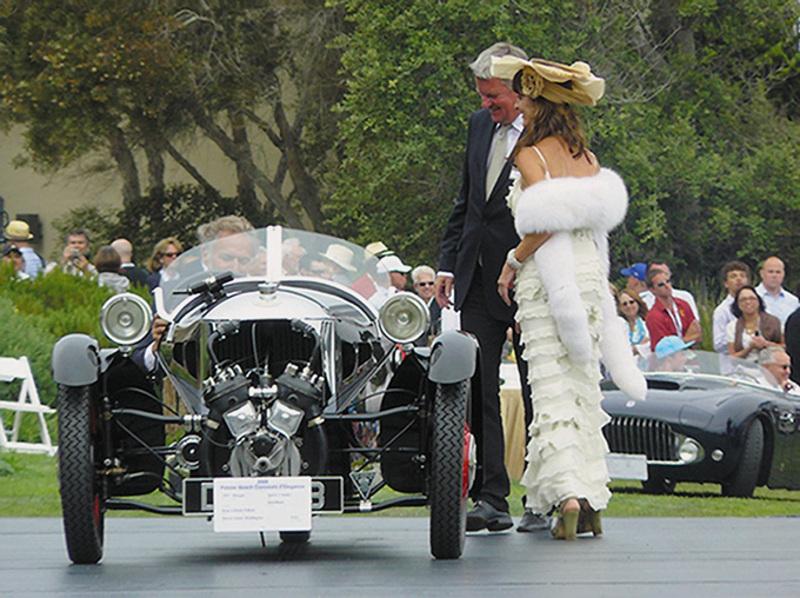 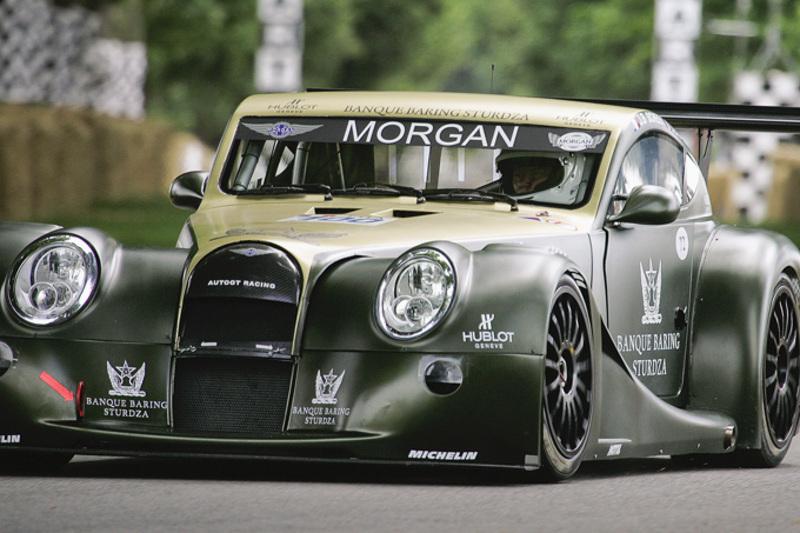 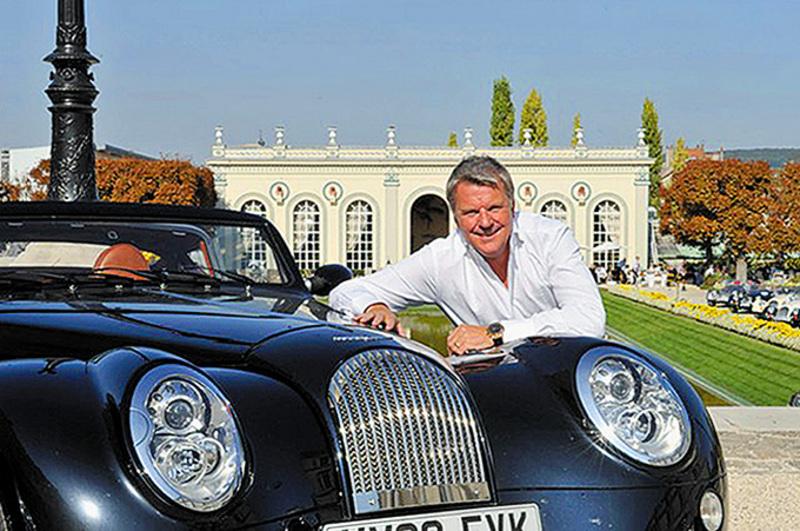 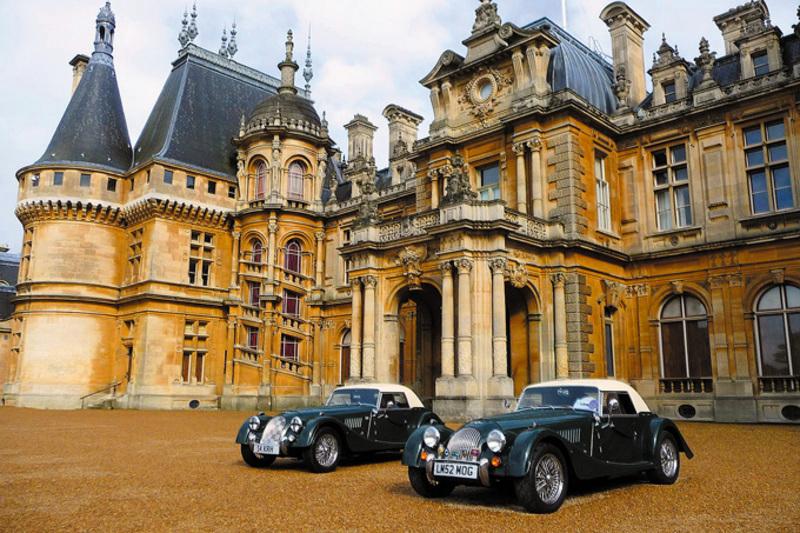 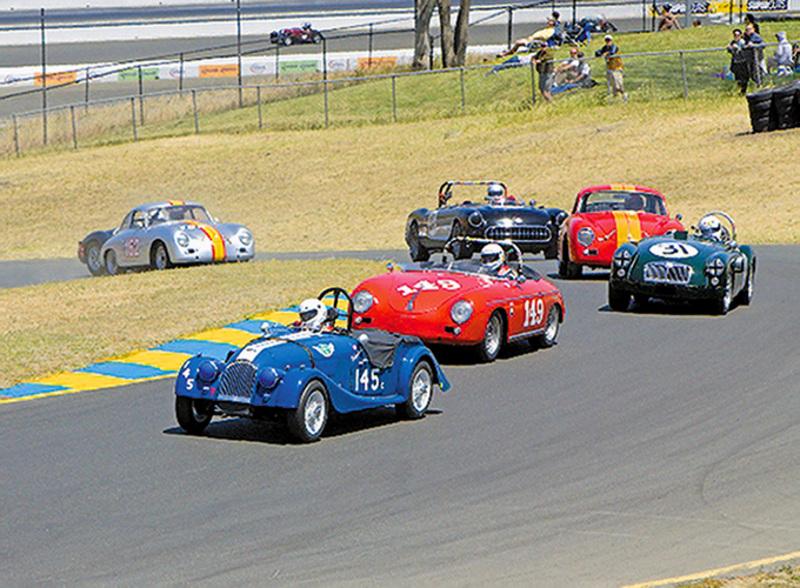 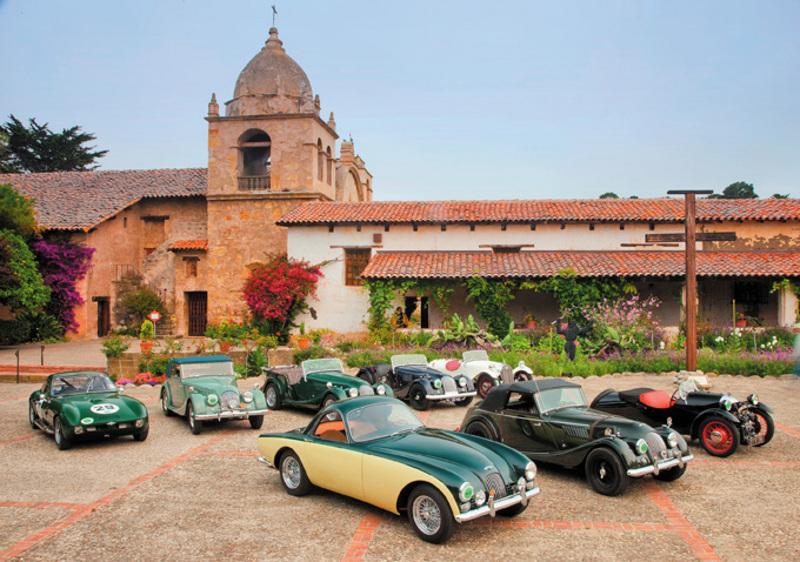 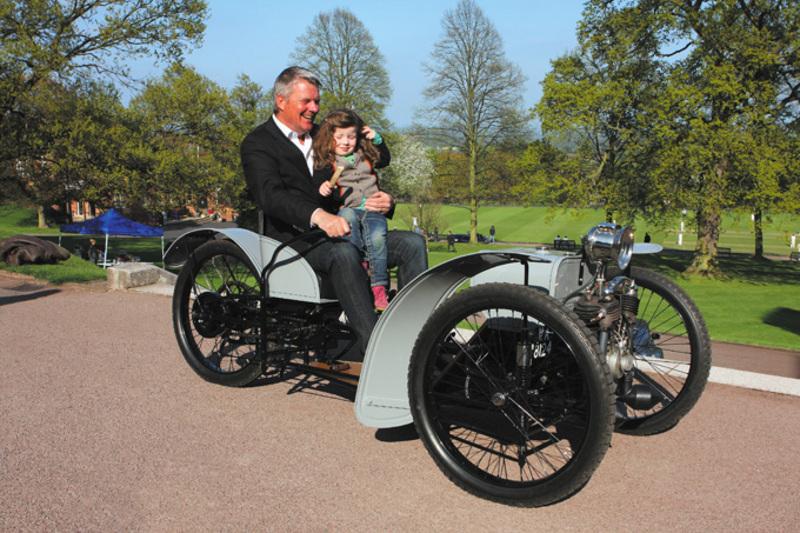 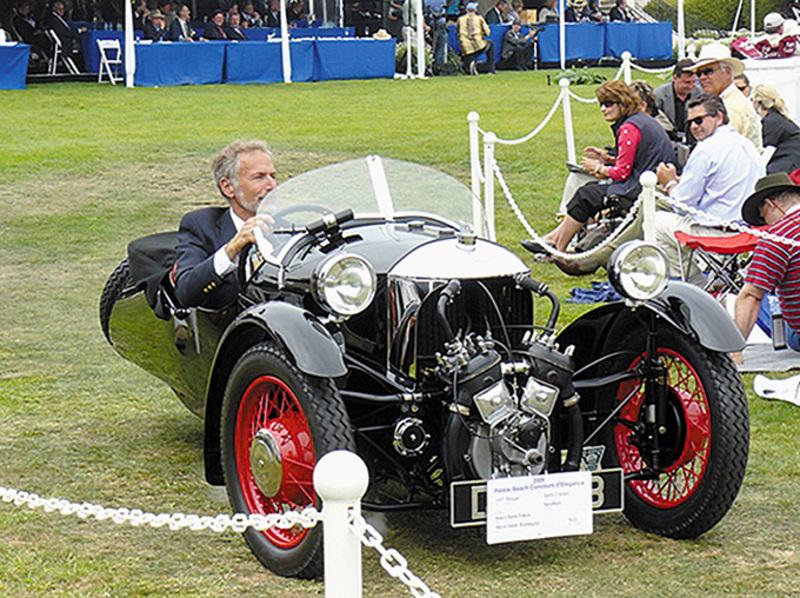 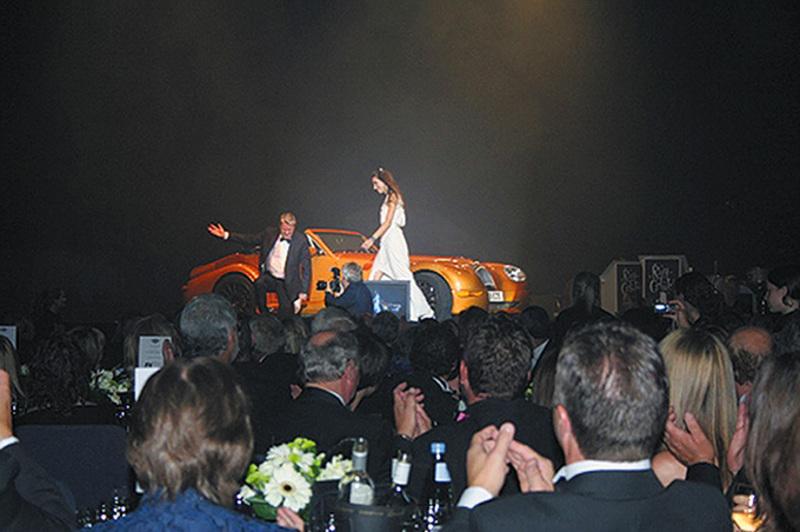 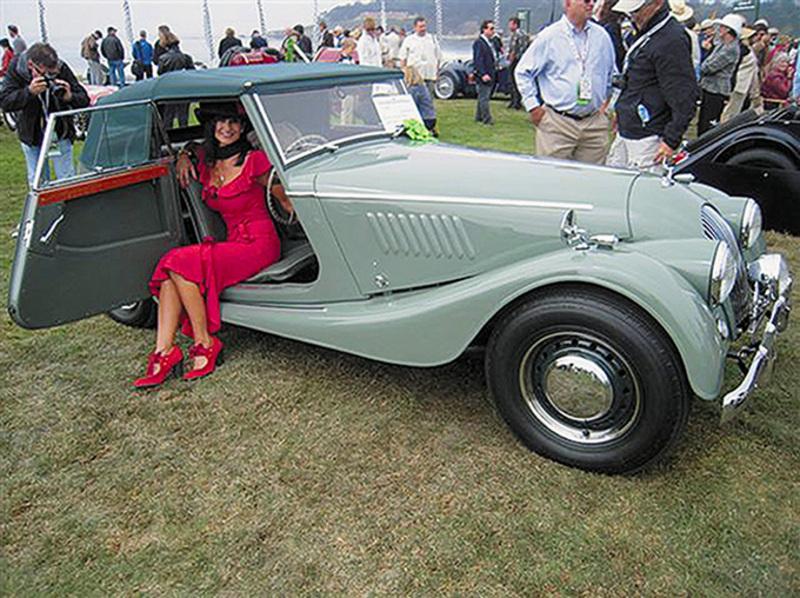 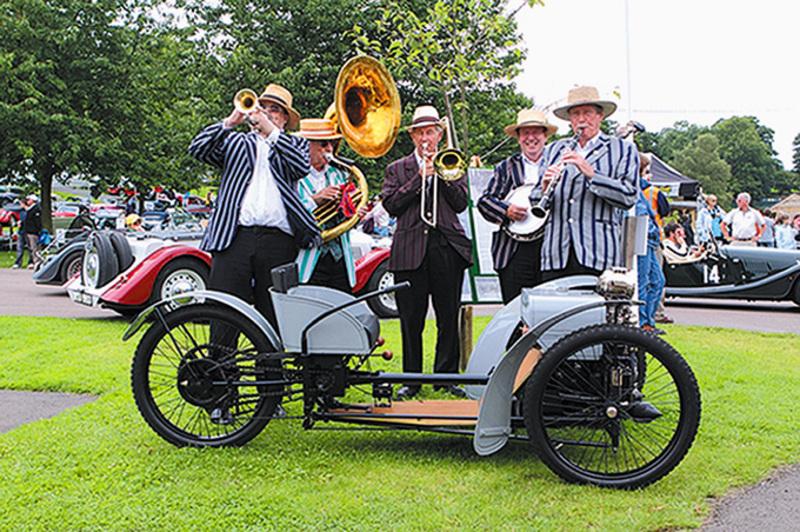 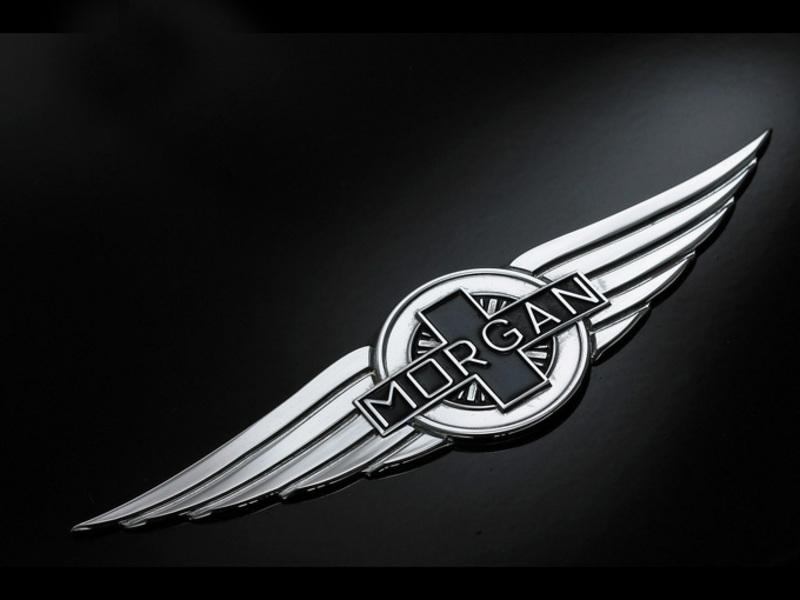 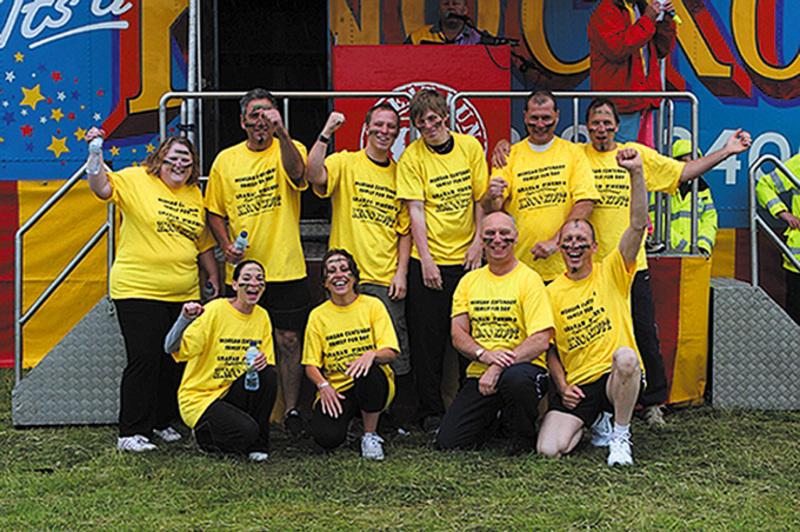 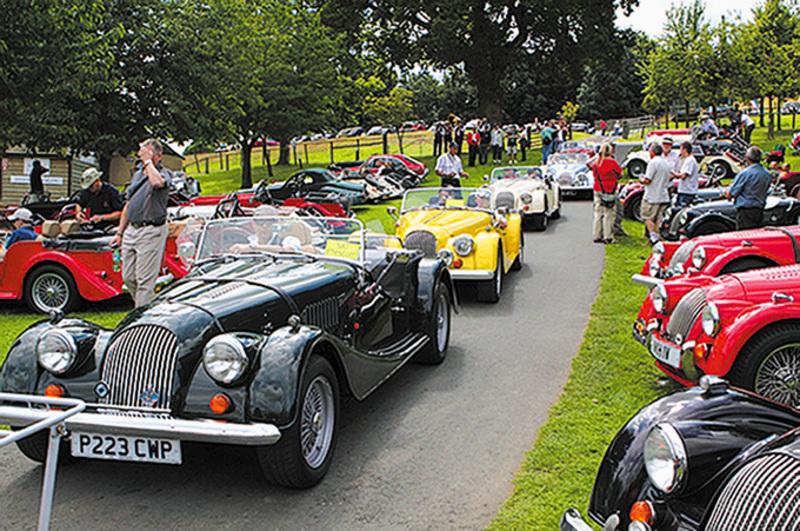 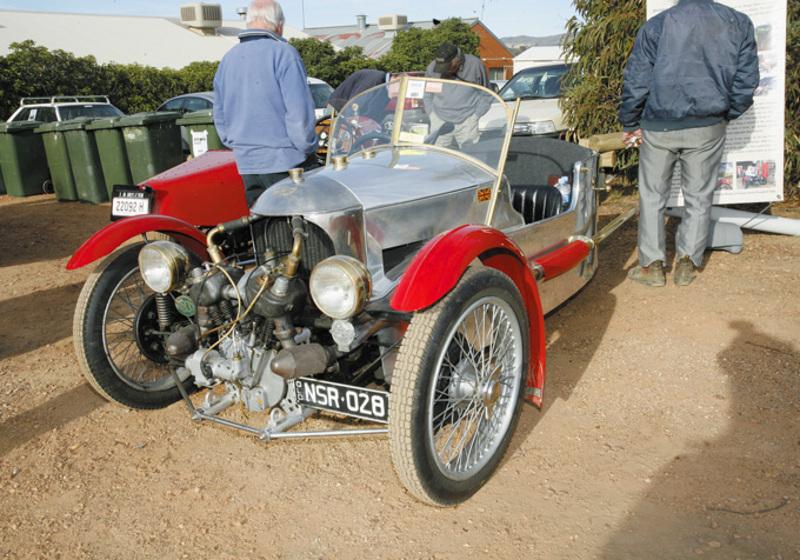 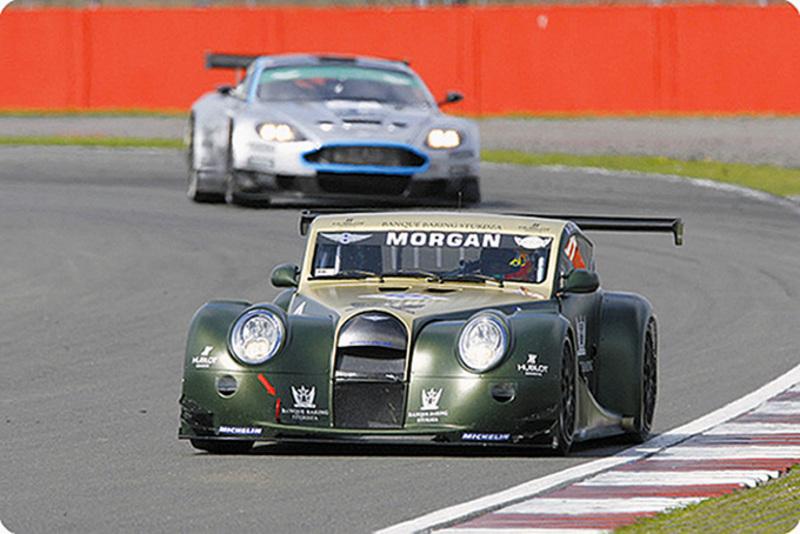 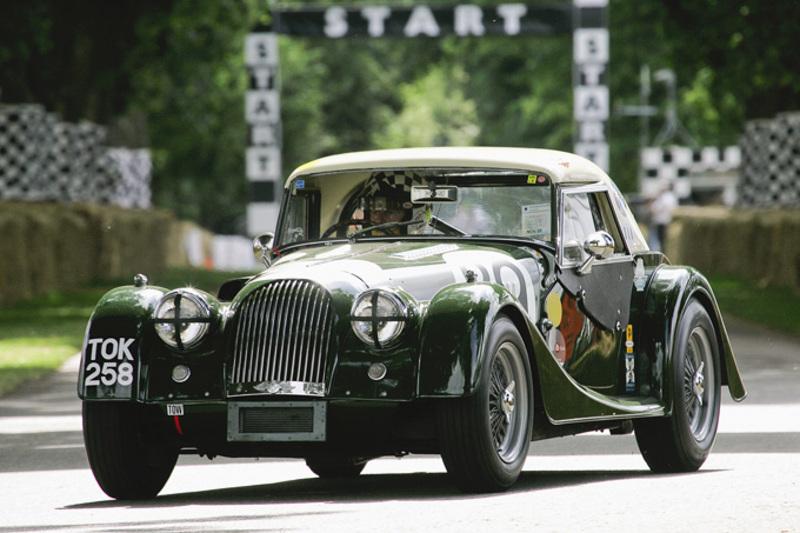 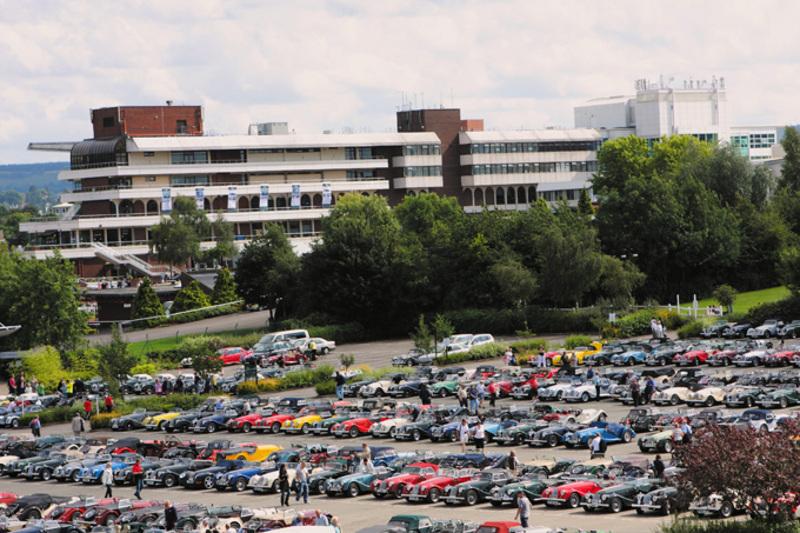 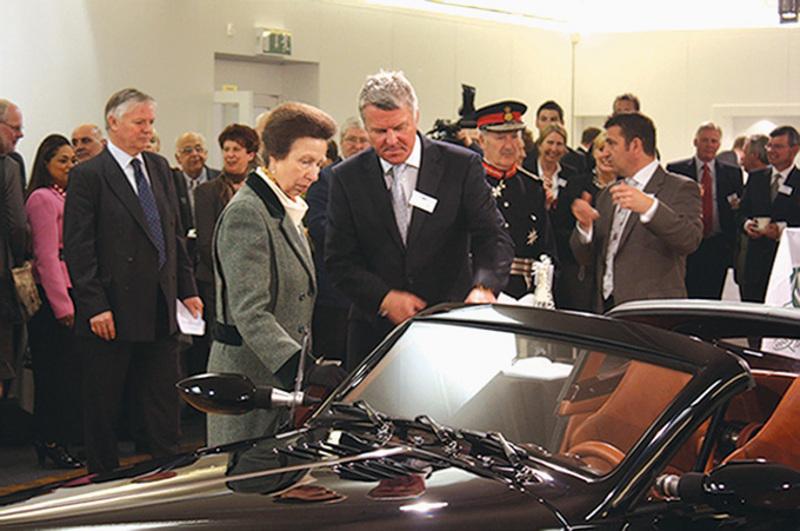 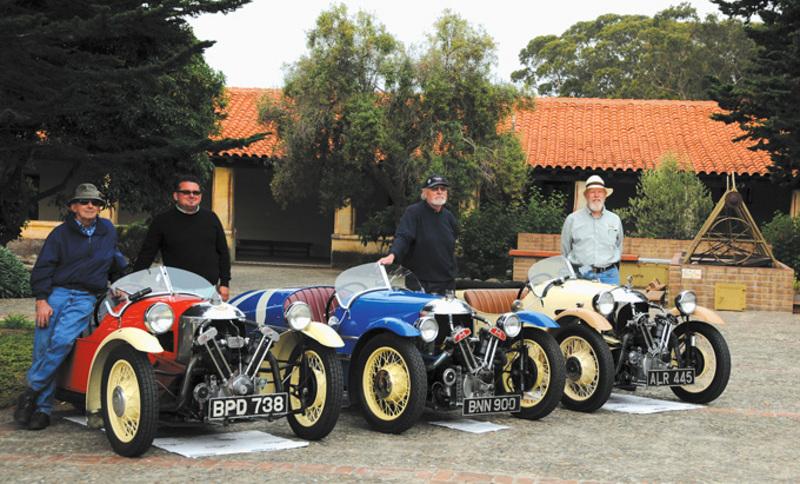 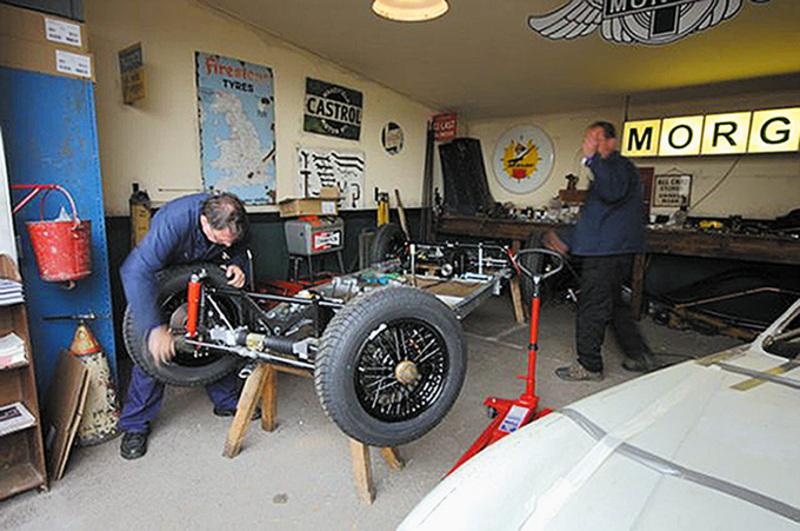 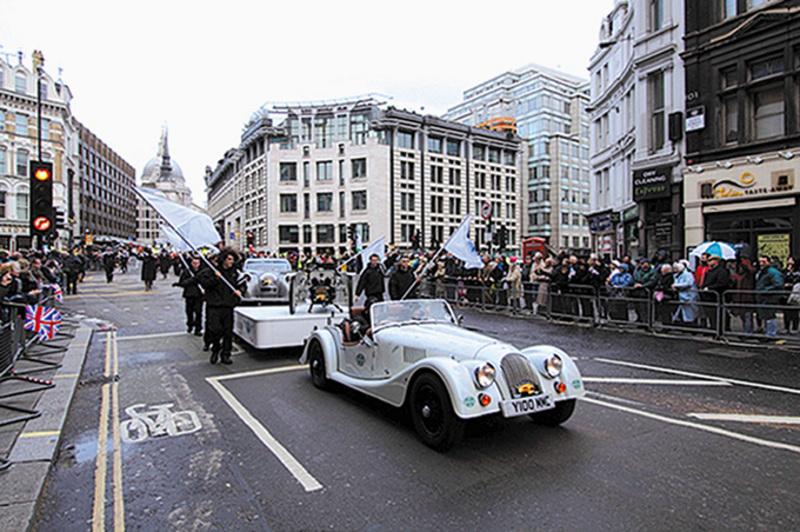 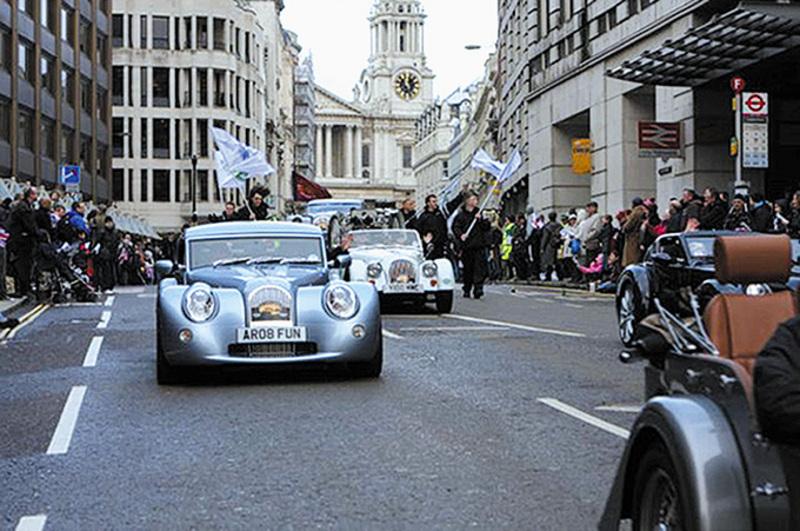 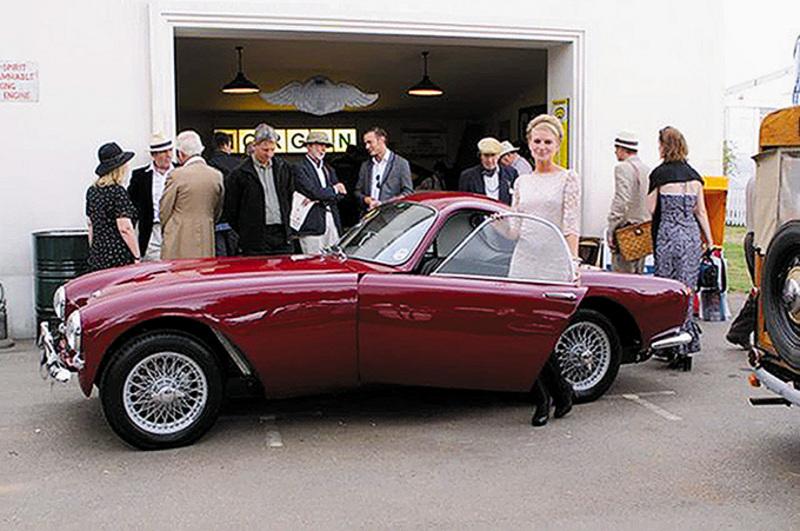 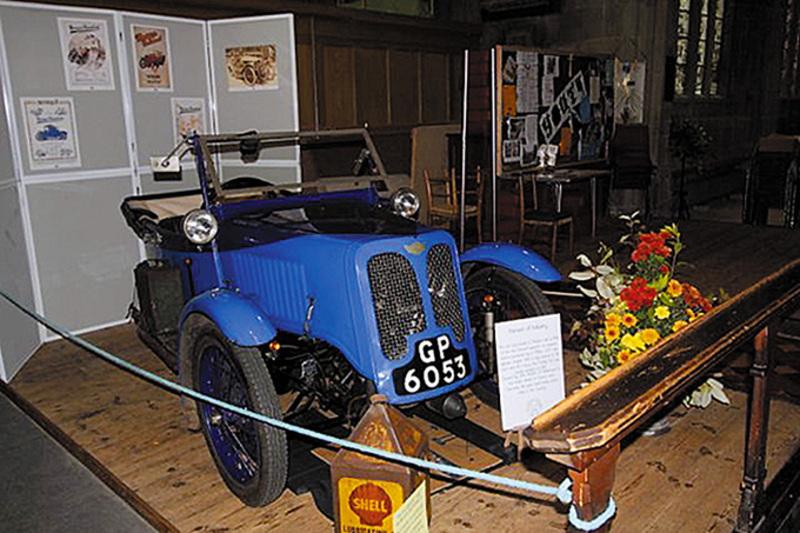 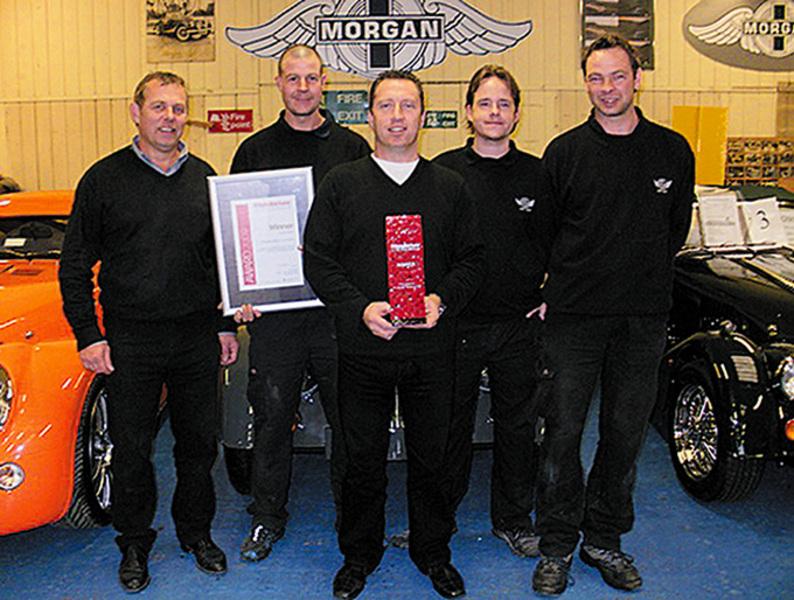