The C-Class is offered in three models - all four door sedans - with a choice of three engines. Our test vehicle was the introductory C200K in 'Elegance' spec. The Mercedes strikes an imposing profile, with styling hues linked to the upmarket S-Class. There is a raked bonnet with massive Mercedes emblem in the centre of the grill and headlights that integrate and 'slide' down the sleek bonnet lines. Under the front bumper there is a large opening with smaller side ones that accommodate fog lights. The C-Class cuts an imposing stance with a slightly wider rear wheelbase and flowing lines that suggest an athletic pose and performance greater than is actually delivered. The C-Class is offered with three engines, with our vehicle powered by a 1.8-litre supercharged four cylinder engine. There is also a 2.2-litre turbodiesel and 3.0-litre V6. Our vehicle was fitted with the 1.8-litre unit that produces a modest 125kW at 3800 rpm and torque of 250Nm from 2800 rpm.

For general running around the engine is at best adequate, and is basically under powered for my tastes. To overtake, the pedal needs to be driven aggressively and, while the positive is a tidy fuel consumption, there are many instances when power is lacking. I suspect this would not be an issue in the turbodiesel and far more powerful V6 models. While power is modest, the good figure of 250Nm of torque is the C200s saving grace and provides some grunt when required. The new model is slightly longer (55mm) and wider (42mm), which provides for an interior that is generally spacious with good head and legroom for driver, who also enjoys an excellent driving position. Things are not so good for bigger back seat passengers, who will still find their knees up against the front seats. This can partly be blamed on Mercedes supplying a larger boot to accommodate a full size spare wheel, rather than the run-flat tyre used in Europe.

Inside the cabin is well finished and the driver's seat is first class with support everywhere it should be. The C-Class also bristles with technology, with a host of driver aids - most of which reactive in the background without any direct driver input. Equipment levels are high with just about standard everything. This includes power steering, cruise control, air conditioning, heated power mirrors, power windows, remote locking, AM/FM stereo, tachometer and standard five-speed manual transmission (auto is available). Safety levels are excellent with eight standard airbags included, side and window airbags. All models receive ESP, adaptive braking, ABS, EDB and EBA, Parktronic parking distance sensors and Mercedes Pre-Safe, anticipatory occupant protection system. On the road the C-Class is a very pleasant drive - notwithstanding the performance limitations of the base engine.

All models feature Agility Control suspension which works a treat. Ride and handling are first class with Sport and Comfort modes available at the flick of a switch. Sport mode providing slightly firmer suspension settings and a more performance oriented drive. The C-Class is built on a new platform with 45mm wider wheelbase and wider front and rear track. Through the use of ultra-high strength steels the vehicle does not gain in weight. Drive is to the rear wheels, and suspension is a modified three-link MacPherson strut at the front and multi link independent rear setup. Mercedes Agility Control suspension is an adaptive system that effectively improves ride and handling by altering the characteristics of the car's dampers. The new C-Class is a step up from previous models and certainly is more accomplished. There is a model to suit most buyers and with coupe and wagon models due next year this model certainly has the credentials to challenge BMWs 3 Series.

The new Mercedes C-Class is offered with three engines in two designs.

With the Avantgarde, Elegance and Classic models, Mercedes-Benz offers three individual models whose emphasis is on either comfort or agility. All model variants share the latest state of the art technology. This includes the newly developed Agility Control package with situation-responsive shock absorber control and the Pre-Safe preventive occupant protection system. There is a choice of four and six-cylinder engines with up to 12.5 percent more output than the preceding model, accompanied by up to six percent lower fuel consumption. With a length of 4581 millimetres, the Saloon is 55 millimetres longer than its predecessor. The body width has increased by 42 mm to 1770 millimetres, and the wheelbase by 45 mm to 2760 millimetres. These dimensions create the conditions for a generously sized interior, and therefore more comfort. The front shoulder room has increased by 40 millimetres, for example. The design of the new C-Class is based on the modern Mercedes idiom, which reflects the technical superiority of automobiles bearing the star with taut lines and large, tranquil surfaces.

The pronounced wedge-shape of the front end serves to emphasise attributes such as agility and performance. For the first time in a Mercedes saloon, the radiator grille is used as a distinguishing feature to position the model variants more clearly. Three extended, horizontal louvres and a big centrally positioned Mercedes star characterise the Avantgarde model as a traditional design feature of sporty Mercedes models. Together with the sporty, high-quality appointments, this feature emphasises the youthful, agile appearance of this C-Class. This sporty presence can be enhanced even further with the AMG sports package, which includes striking front and rear aprons plus side skirts. In the Elegance model Mercedes- Benz employs a three dimensional, louvred radiator grille with a high gloss paint finish to accentuate attributes such as comfort and luxury. The Classic model in the new C-Class is intentionally more restrained and traditional, but offers the same technical innovations as the other two model variants.

AGILITY CONTROL - this is the term used by Mercedes-Benz for all new and further developments that improve both comfort and agility in equal measure. This standard package includes the Agility Control suspension, which controls the shock absorber forces according to the driving situation: when driving normally with low shock absorber impulses, the damping forces are automatically reduced for a noticeable improvement in ride comfort - but without any compromise in handling safety. When driving more dynamically, the maximum damping forces are set and the car is effectively stabilised.

SAFETY - The safety technology in the interior has been complemented with the very latest protection systems. Eight airbags are included as standard equipment: two adaptive airbags for the driver and front passenger, two sidebags in the front seat backrests as well as sidebags for the rear seat row along with two large windowbags which extend from the A to the C-pillar during a side impact. The driver, front passenger and the passengers on the outer rear seats also benefit from belt tensioners and belt force limiters as standard.

PRE-SAFE - another special feature of the new Mercedes Saloon. This preventive occupant protection system (fitted as standard equipment) is linked to active safety systems such as ESP® and Brake Assist, and is able to recognise critical driving manoeuvres at a very early stage. If the C-Class is in danger of crashing as a result of heavy under or over steering, or if the driver needs to brake very heavily in a dangerous situation, Pre-safe activates certain systems as a precaution to prepare the vehicle and its occupants for an impending accident.

C-Class wagon revealed
The practical C Class Estate wagon has been revealed at the Frankfurt Motor Show, but won't be available in Australia until the second quarter of 2008, when full pricing and specs will be announced. It offers a host of handy features for easy loading and safe transportation, including a tailgate which opens and closes automatically at the push of a button. Mercedes also promise that it is 12 percent more fuel efficient over the outgoing model. There is a choice of three model lines - Classic, Elegance and Avantgarde - which highlight the vehicle's comfort or agility to differing degrees. 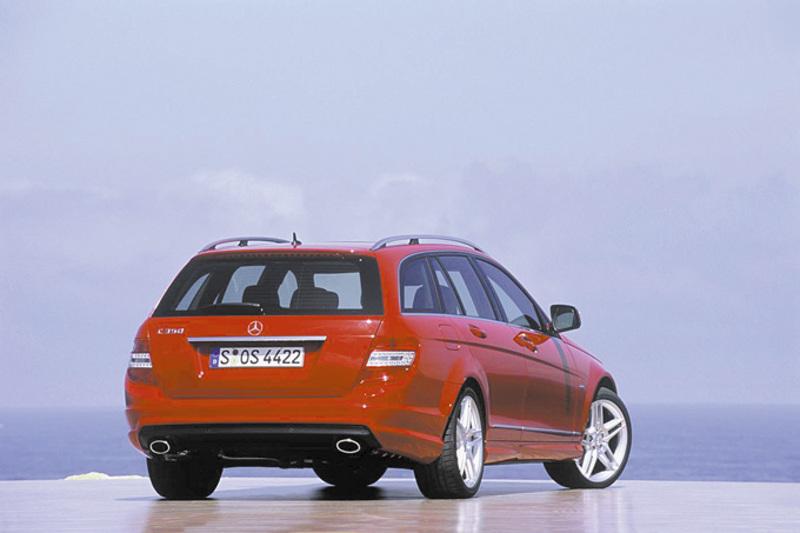 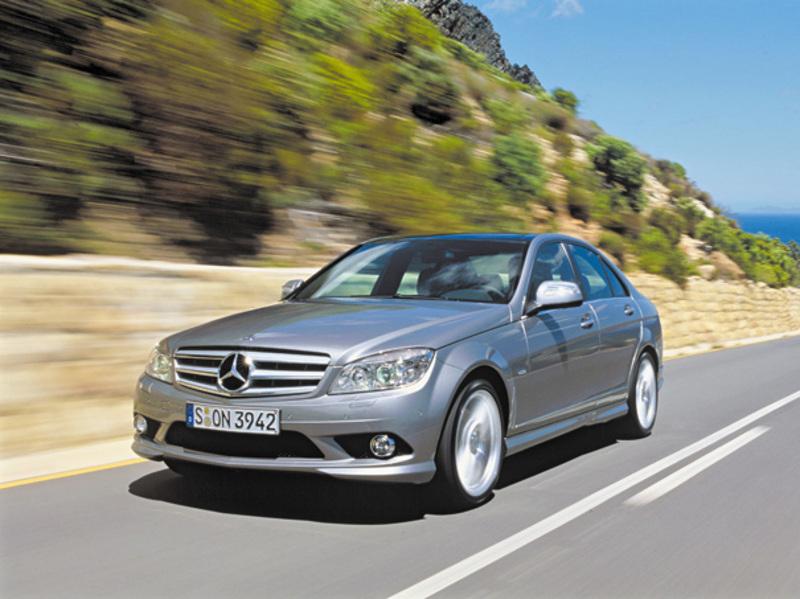 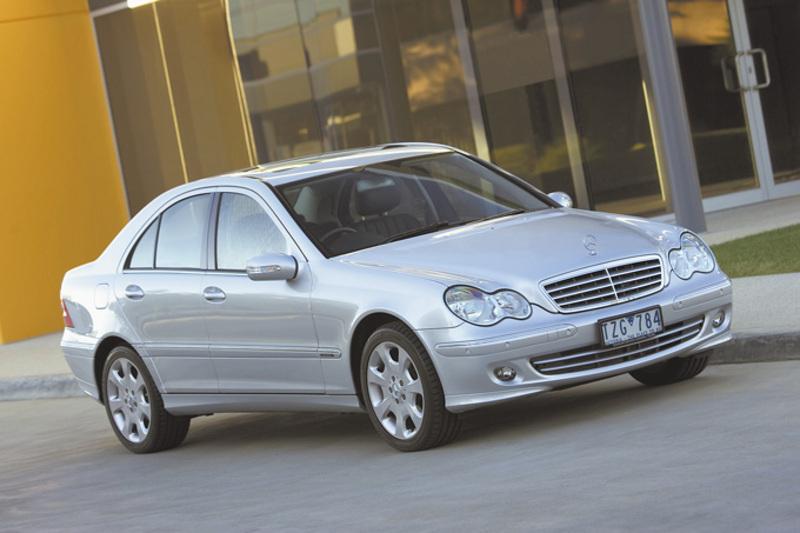