After spinning out teaser videos in a series that seemed to go on forever, Dodge finally took the wraps off their Challenger SRT Demon at the New York International Auto Show in April.

It was a long time coming, but a read through the Demon’s spec sheet shows that it’s been worth the wait, though, with some mighty performance figures from this dragstrip-focussed machine.

There are five key words you need to know when it comes to the Demon – Most Powerful Muscle Car Ever.

This isn’t just a boast, as the Demon packs a 6.2-litre supercharged HEMI V8 engine that’s had the wick dialled up to produce a maximum 840hp (626kW) and 770lb/ft (1044Nm) when running on high octane fuel and with certain dragstrip-specific optional parts added. Even without these parts added, the Demon puts out an impressive 606kW and 972Nm on regular 91 octane fuel - and is street-legal in this form.

Surprisingly, what the Demon isn’t legal for - at least in its as-delivered form - is the quarter mile. Dodge took a production example to a dragstrip and recorded a 9.65 second ET and 140mph (224kph) top speed; the fastest ET ever recorded by a production car.

The NHRA certified the time, then immediately banned the Demon from competition, mainly because it doesn’t have a roll cage. Without a roll cage and a competition-licenced driver behind the wheel, the NHRA says the Demon won’t be legal for any recognised quarter mile competition in the US.

In addition to being the most powerful muscle car, the Demon also claims to be the world’s fastest production car over the 0-60mph distance, reaching this mark in 2.3 seconds. Guinness also recognised the first ever front wheel lift in a production car with a 2.92 feet wheelie distance documented for the Guinness Book of World Records.

Other “firsts” and “mosts” claimed by the Demon include:

Being so geared for the dragstrip, the Demon is sure to become a regular sight at US drag events following its release later this year – provided that roll cage is in!

“With Demon, our goal was to build a car that would tattoo the Dodge logo into the subconscious of the general market, beyond even our loyal enthusiasts, said Tim Kuniskis, Head of Passenger Cars – Dodge, SRT, Chrysler and FIAT, FCA North America.

“To do so, we had to set records that have never been set before, do more than has ever been done before, go beyond even the legendary Hellcat.”

While it has clearly been created with the quarter mile in mind, the Demon can be just as usable on the road, with the SRT Performance Pages (via the Uconnect 8.4-inch touchscreen) offering Auto and Eco drive modes for regular street driving. The Demon-only Drag mode is for the strip, while a Custom mode, that enables elements of all modes to be combined, is also available.

In the Demon, the Performance Pages function adds a data recorder, allowing drivers to record and analyse past performances, building up a data bank to apply to future quarter mile runs.

To achieve its whopping output figures, the Demon’s 6.2-litre HEMI engine has been subjected to major work by the Dodge and SRT teams.

While the 6.2 is the same capacity as that used in other Challenger variants, including the SRT Hellcat, the Hellcat produces “only” 527kW. The Demon increases that to a maximum 626kW thanks to a number of changes.

Leading the way here is the larger supercharger; a 2.7-litre unit, instead of the Hellcat’s 2.4-litre item, with boost pressure dialled up from 11.6psi to 14.5psi. More air is sucked in thanks to the significantly larger Air Grabber bonnet scoop, aided by an ‘Air Catcher’ inlet in the driver’s side front headlight and a third inlet near the front wheel liner. Combined, these inlets deliver 18 per cent more air to the HEMI V8, compared to the SRT Hellcat.

The air delivered is cooler, too, thanks to the SRT Power Chiller. A production car first, the Power Chiller uses the refrigerant from the car’s air conditioning system, diverting this through the radiator to a chiller unit that cools it even further, before it flows to the heat exchangers in the supercharger.

A companion to this is the ‘After Run Chiller’, which works in a similar fashion, but keeps the engine cooling fan and coolant pump running after the engine has been shut down, lowering the supercharger/charge air cooler temperature, which in turn reduces the effects of heat soak on the engine. SRT says that, combined, these systems can lower air temperature by up to 7.2 degrees Celsius (45 degrees Fahrenheit).

Internal changes to the engine include a revised valvetrain, stronger conrods and an upgraded oiling system. An additional dual-stage fuel pump, larger fuel injectors and high-pressure fuel lines are added, too, which combine with a raised redline of 6500rpm, instead of 6200rpm.

Given its dragstrip focus, the engine has also been modified to run on 100+ High Octane fuel – the first street-legal factory-production car to do so – thanks to its Powertrain Control Module (PCM). A part of the ‘Demon Crate’ of optional accessories specifically for quarter mile competition, the PCM is calibrated for the high octane fuel (instead of 91 octane) and matched to a switch bank for the centre control stack that includes a high octane activation button.

Dodge says the engine can run on a mix of 100+ and 91 octane without negative impact, thanks to knock sensors that prevent the high-octane activation button from working if the octane rating is detected as being too low.

Two different ignition keys make the choice between “hot,” “hotter” and “hottest” easier, with a black key limiting engine output to 373kW, while the red key will give you 606kW and 972Nm. To get the full 626kW, you need the red key in combination with the PCM, 100+ fuel and activation button for that fuel. In street spec, power output can also be adjusted with the red key. 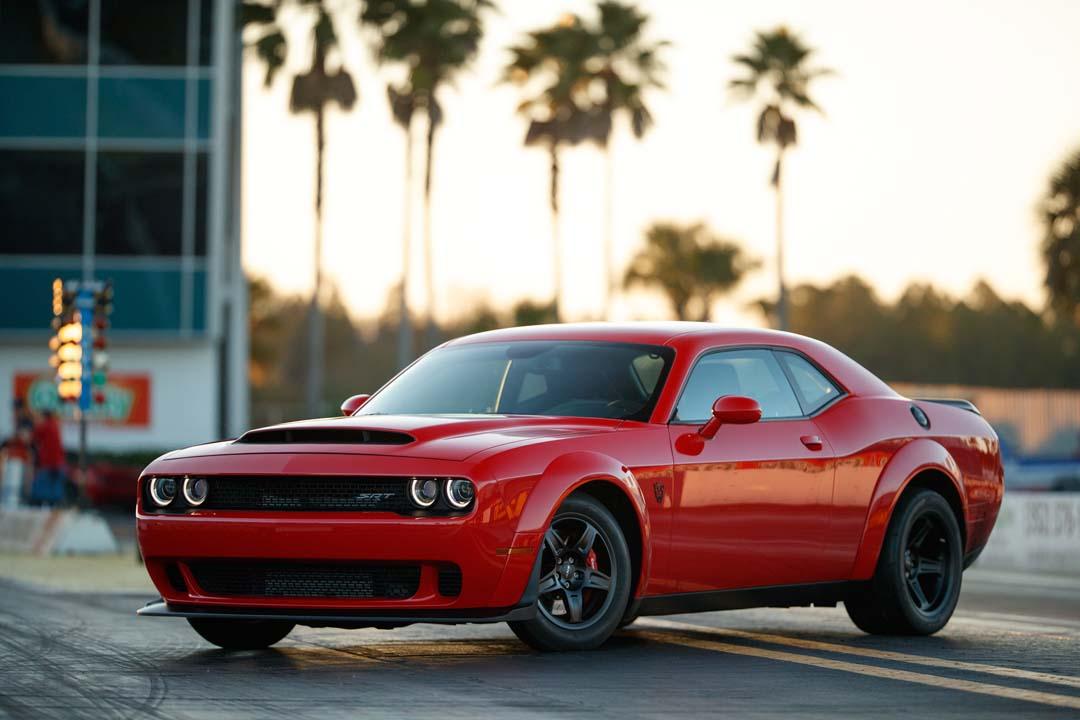 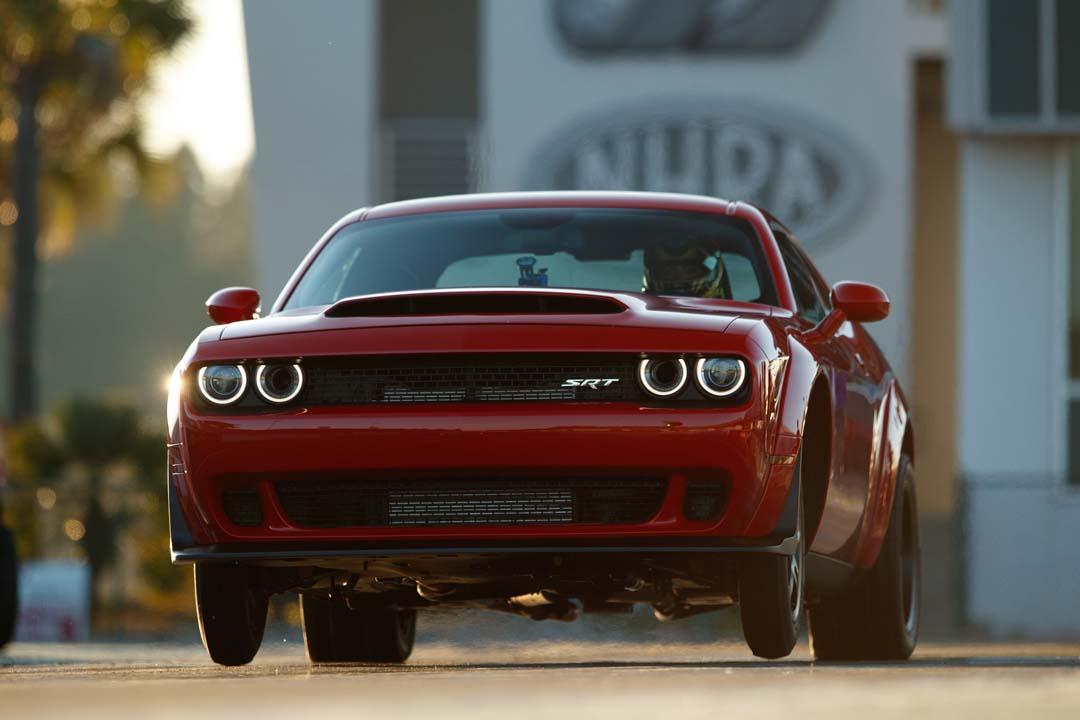 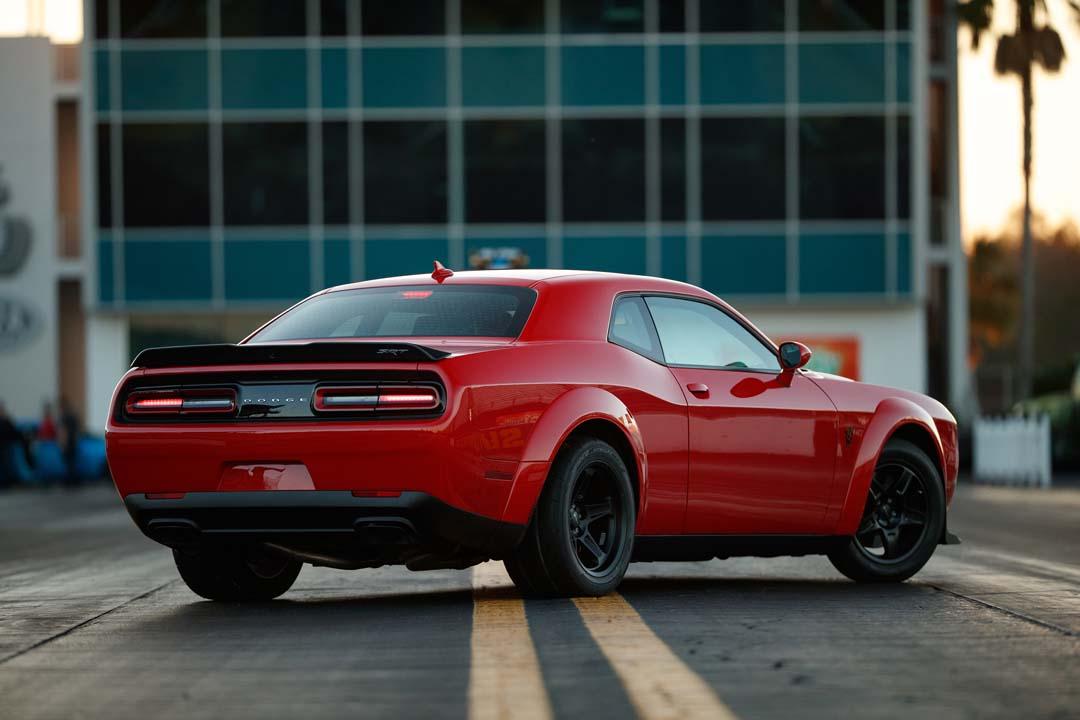 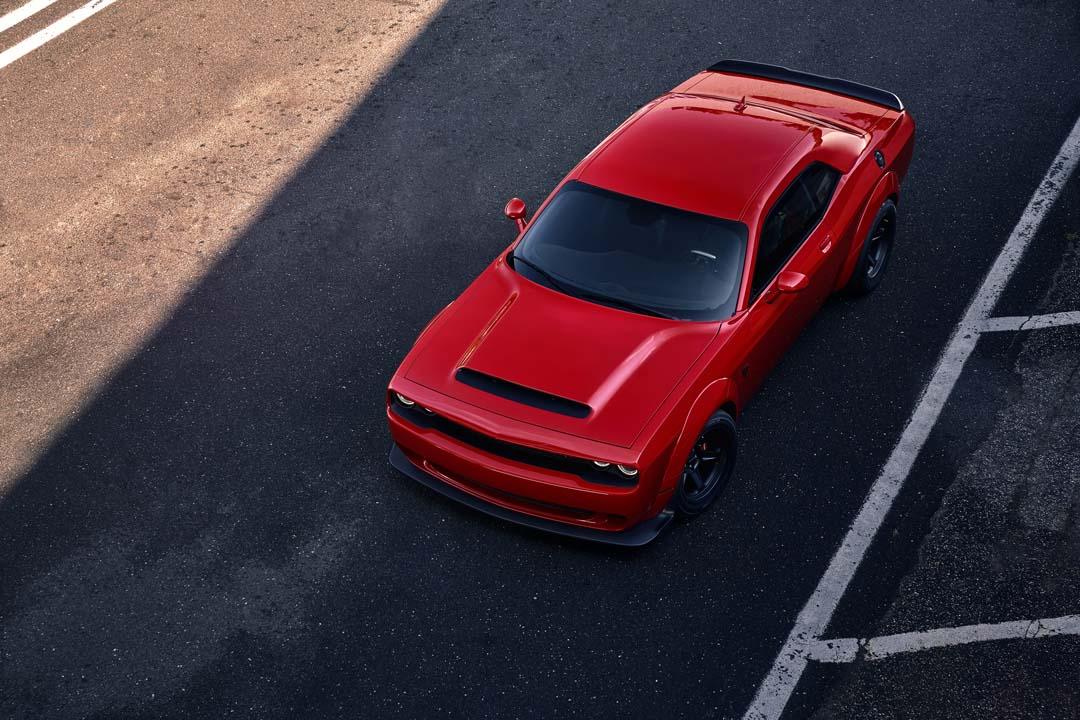 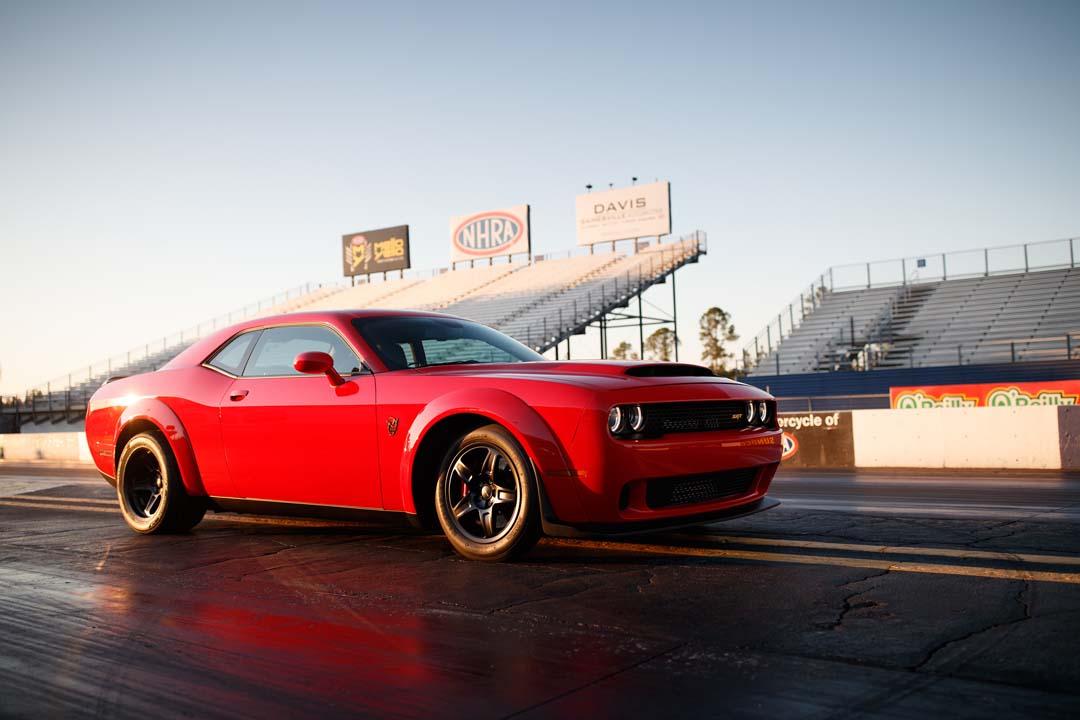 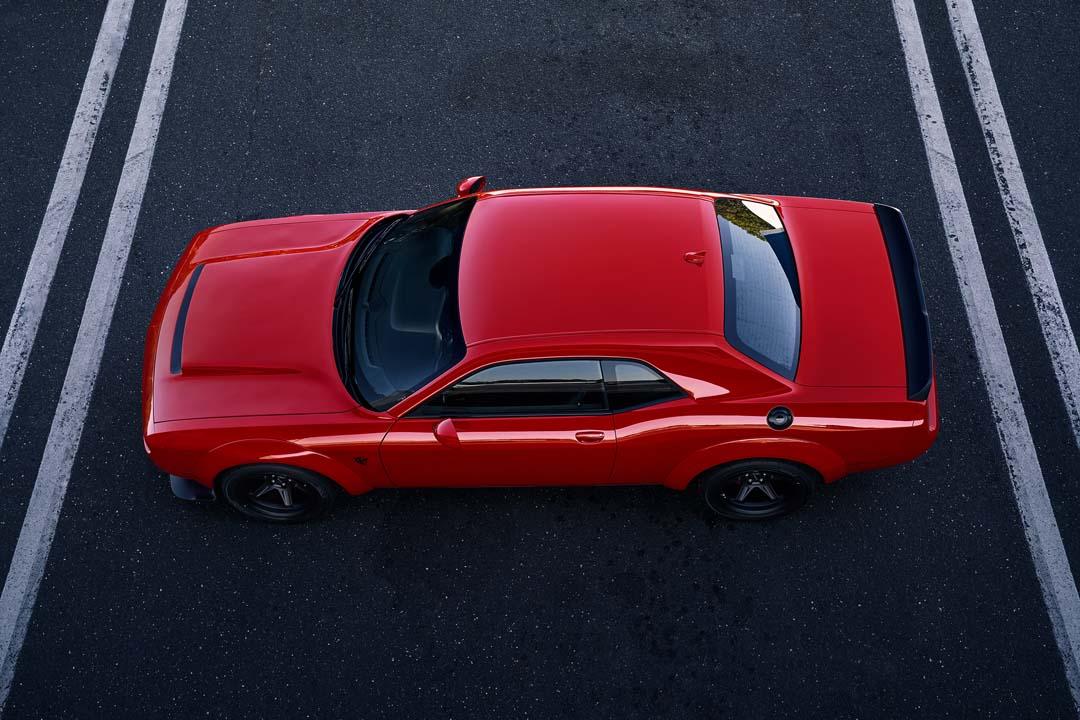 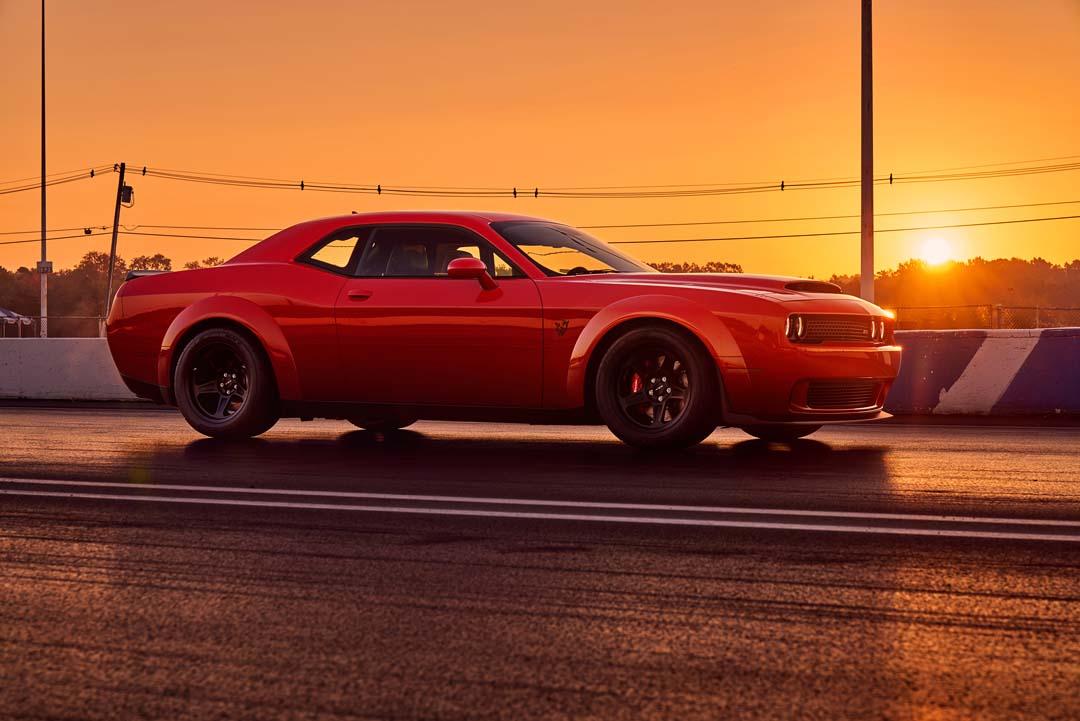 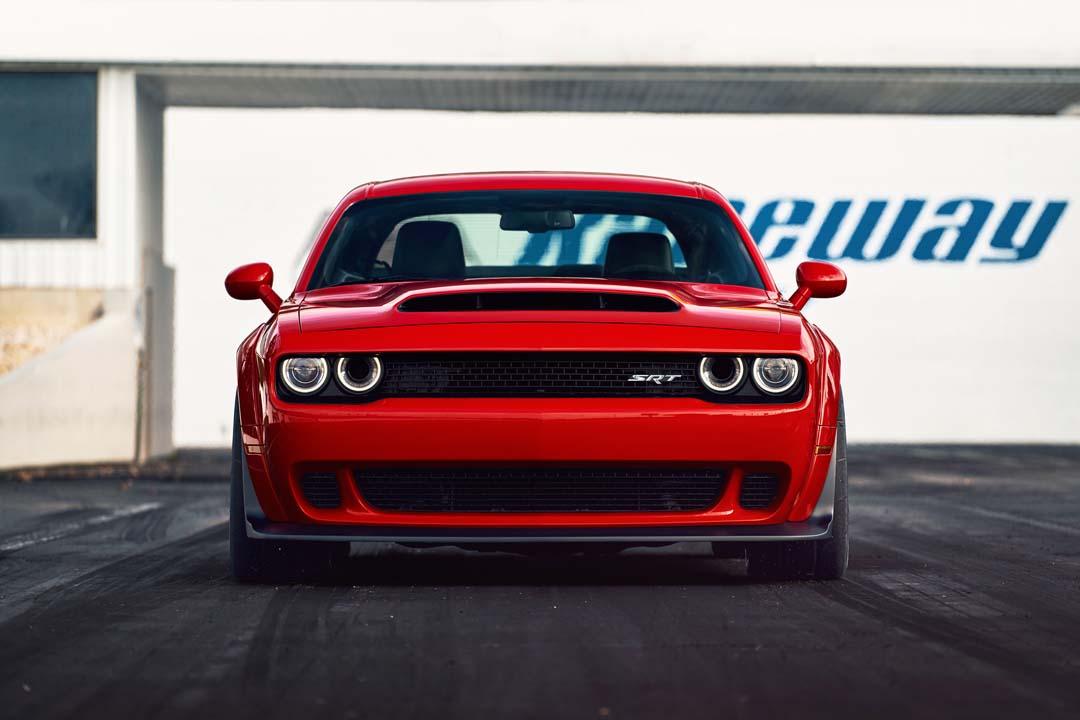 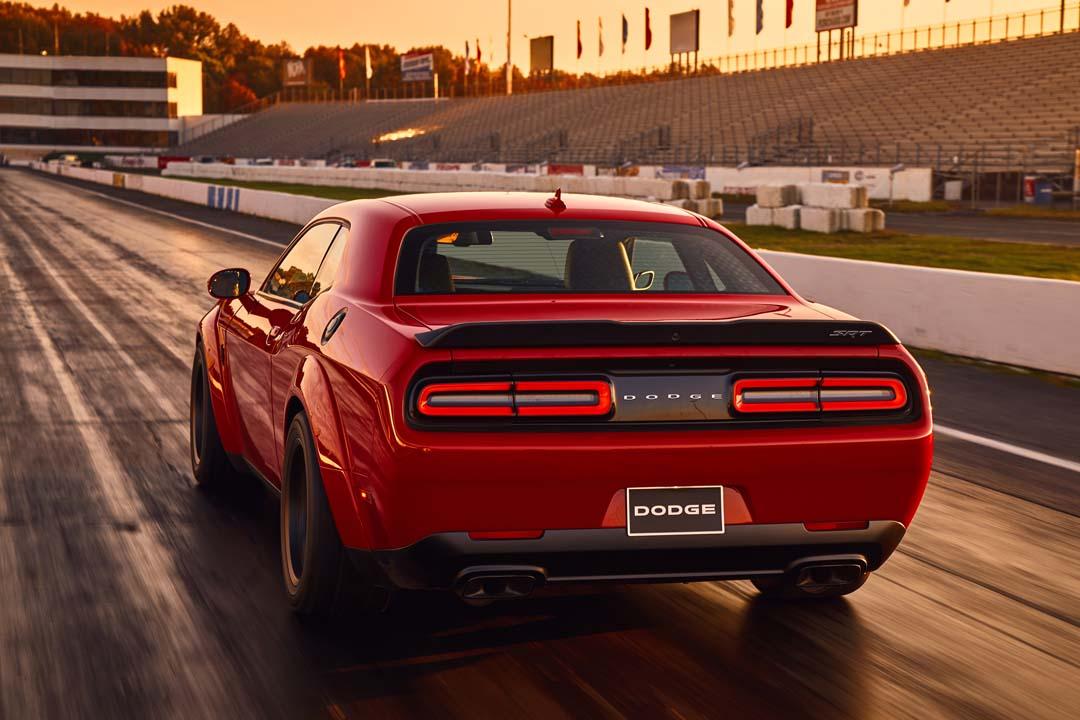 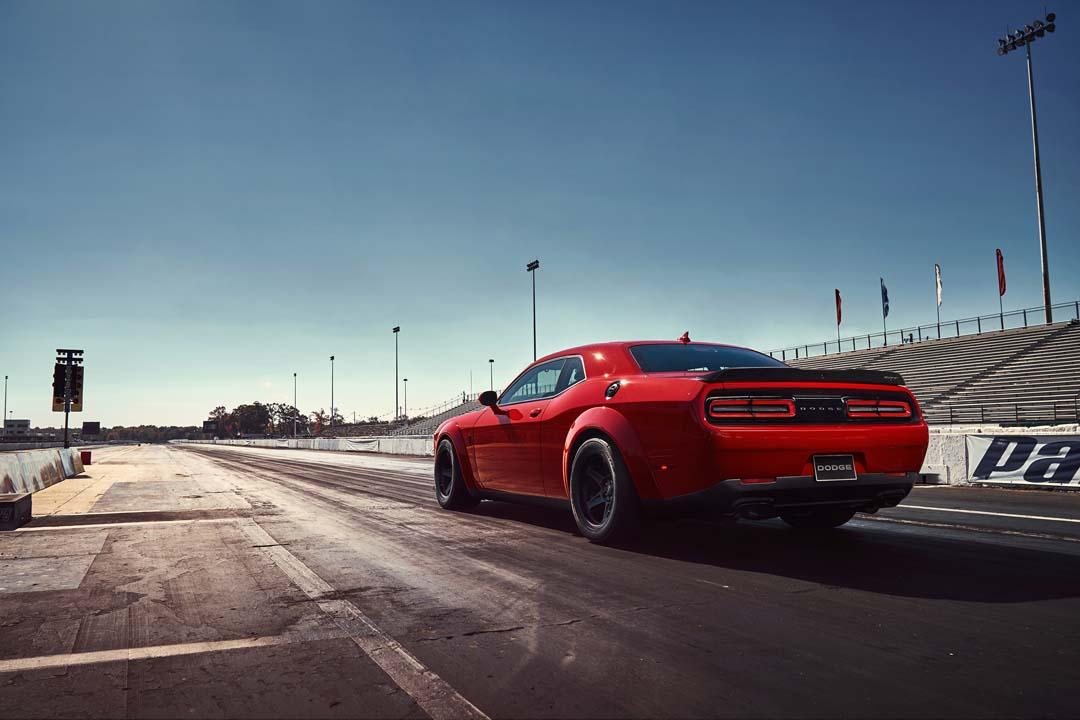 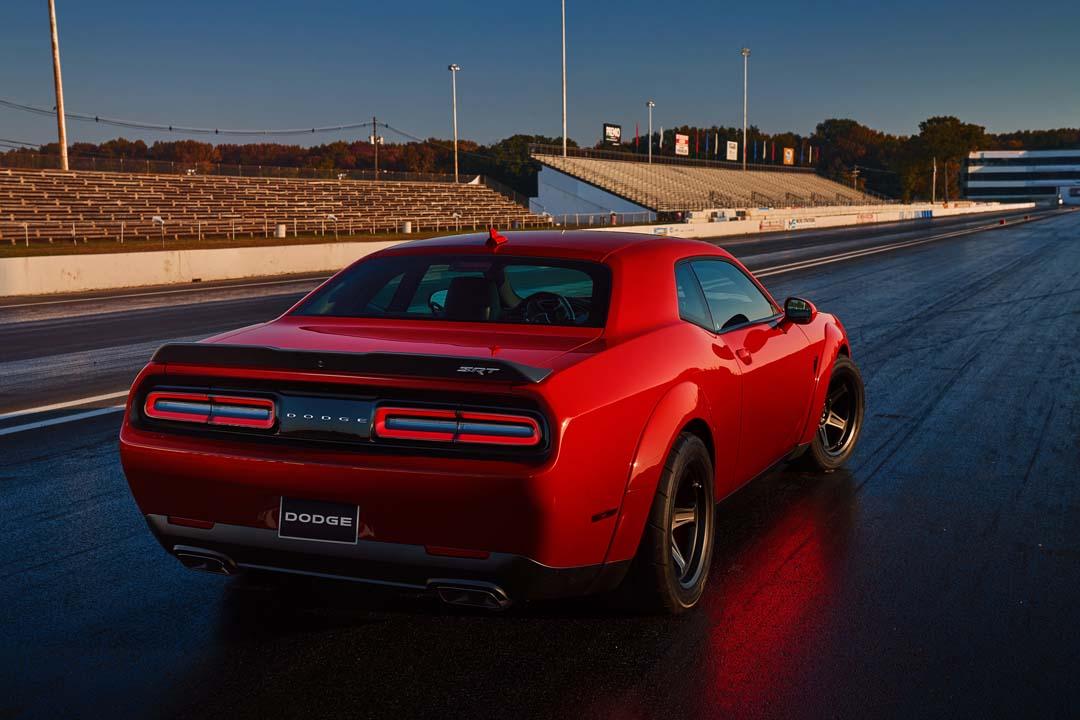 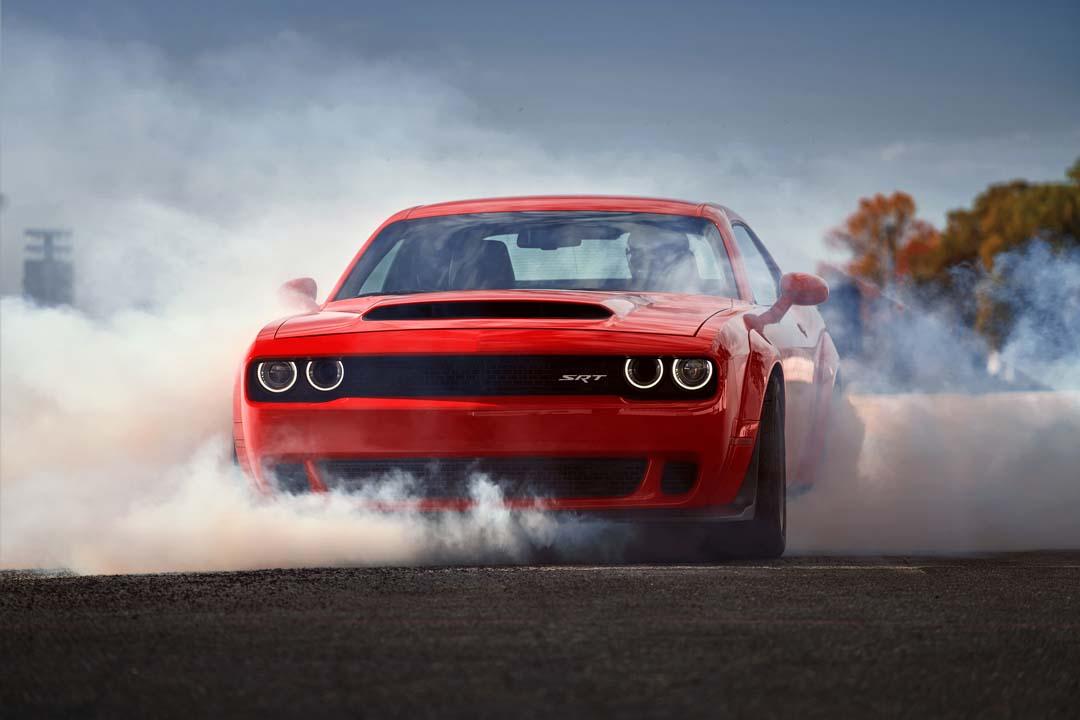 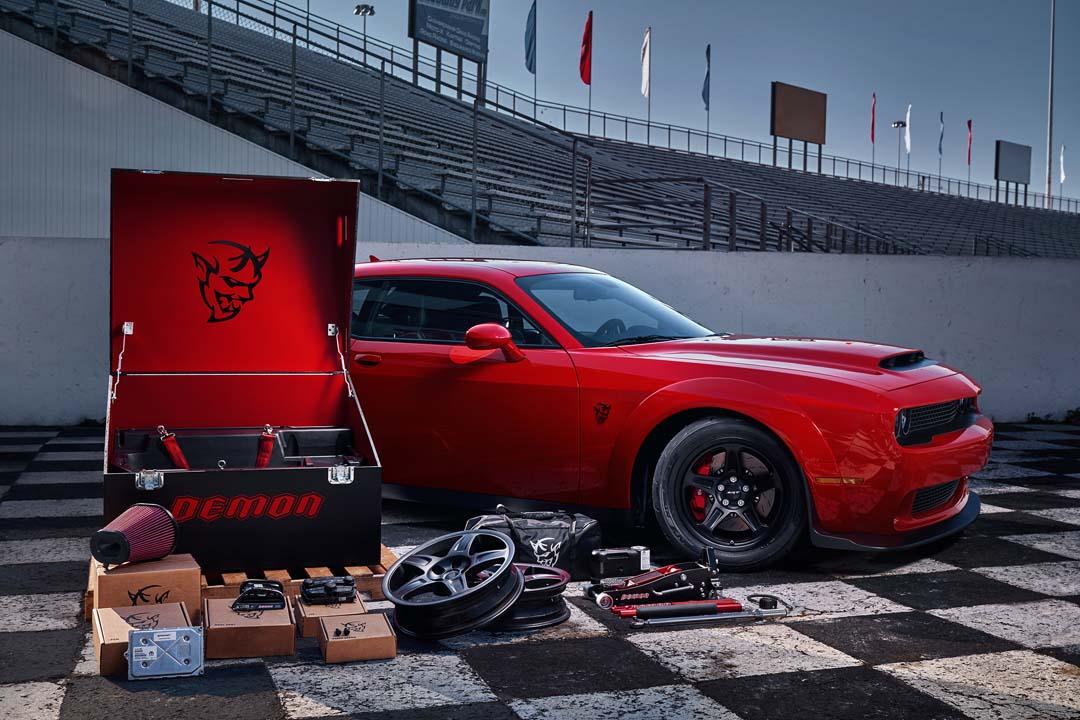 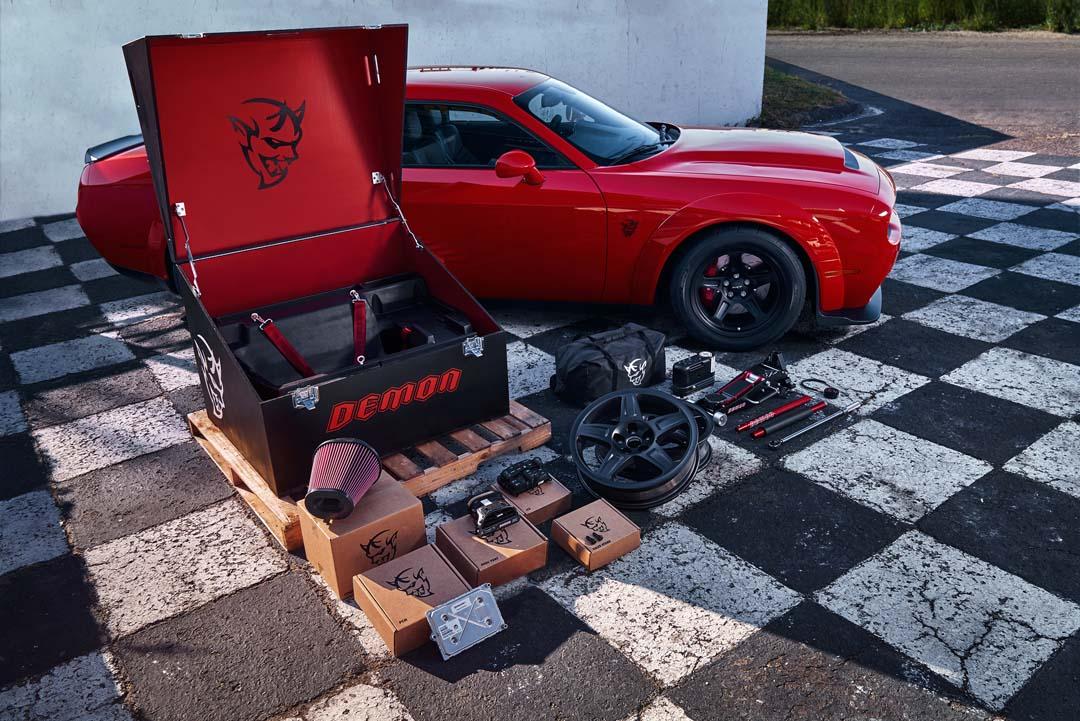 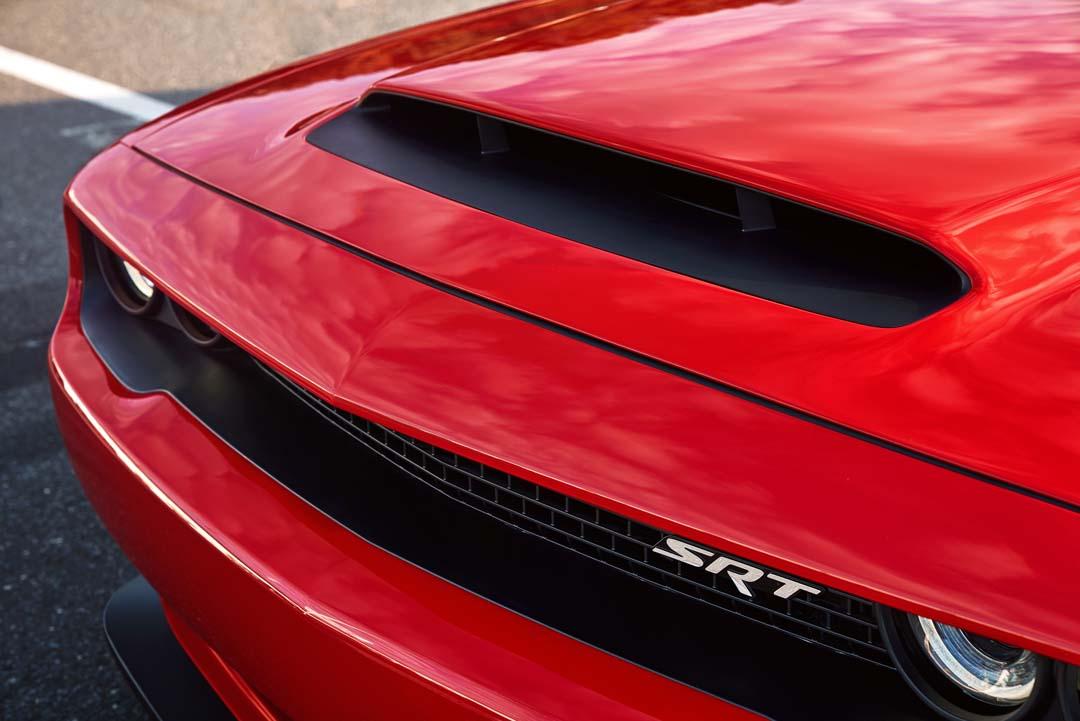 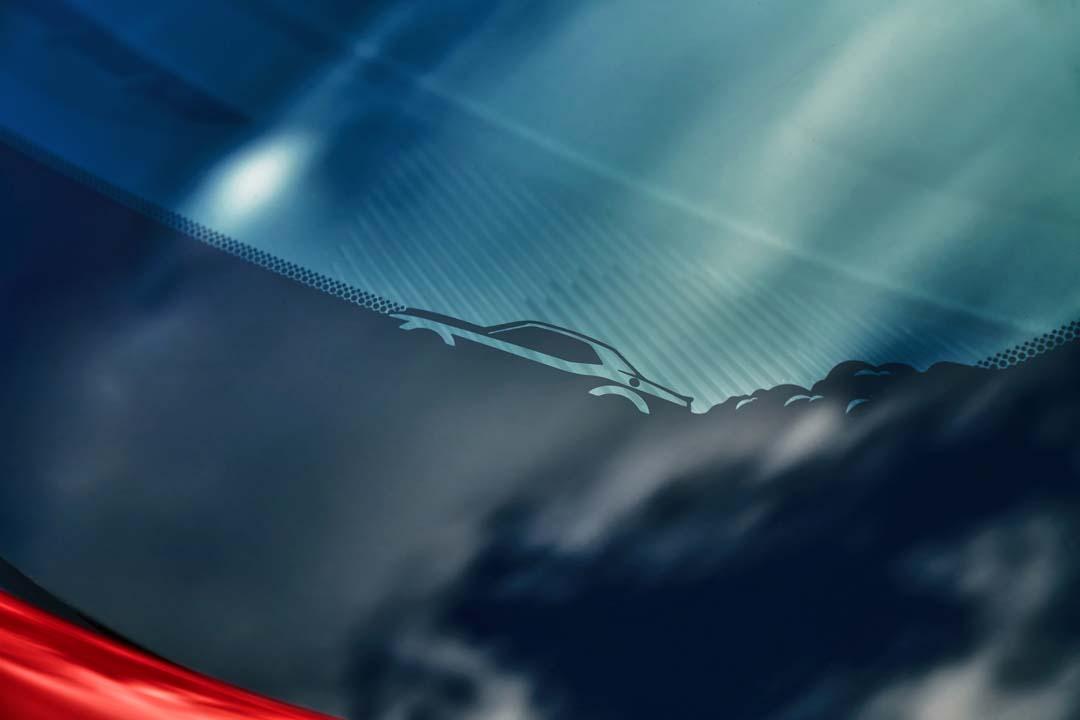 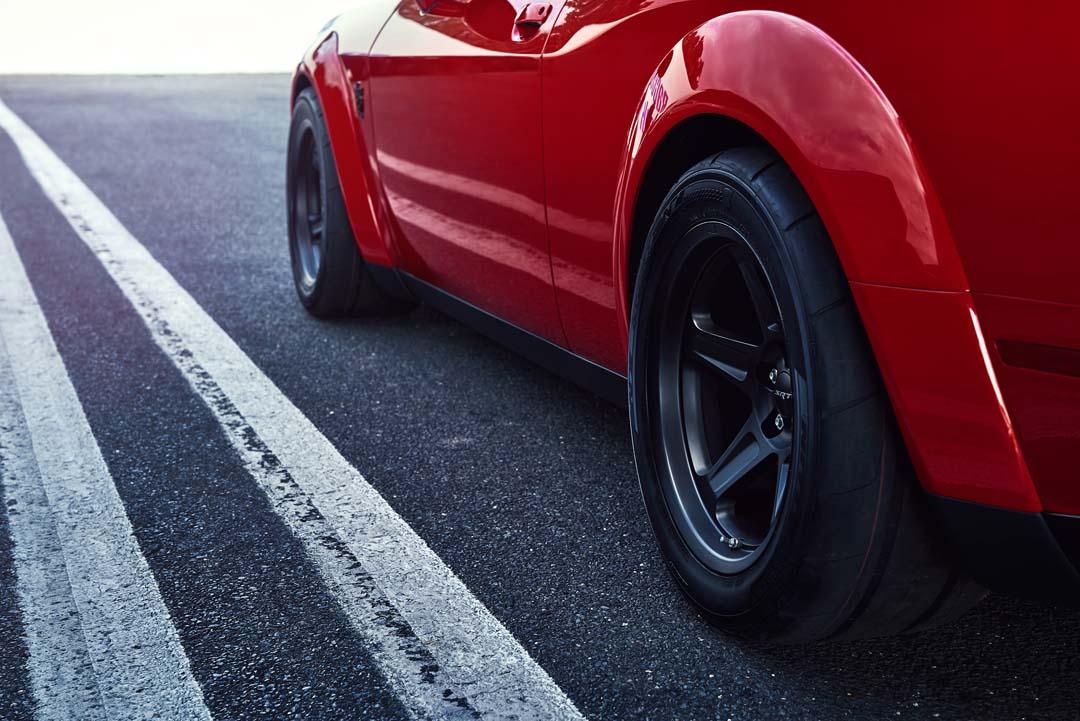 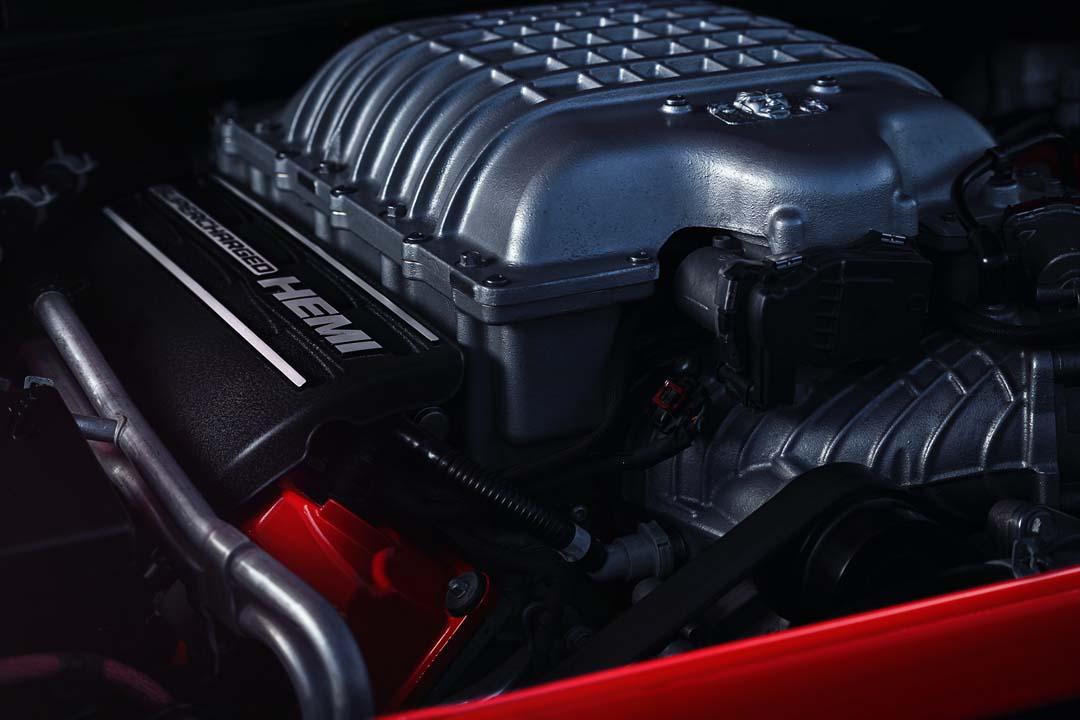 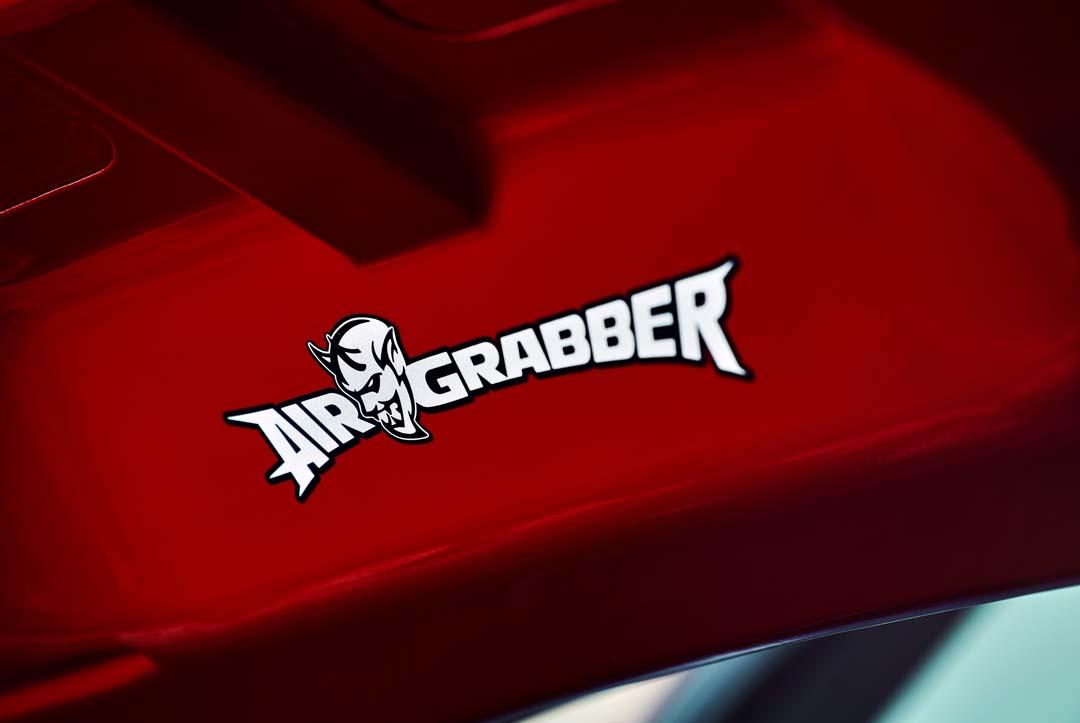 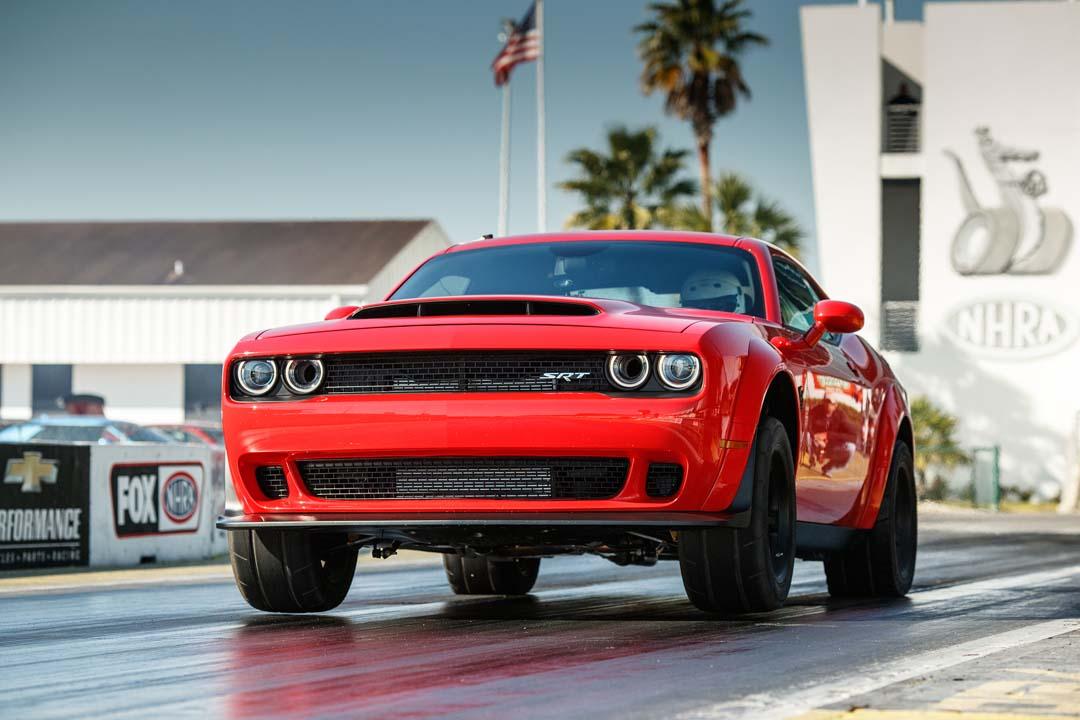 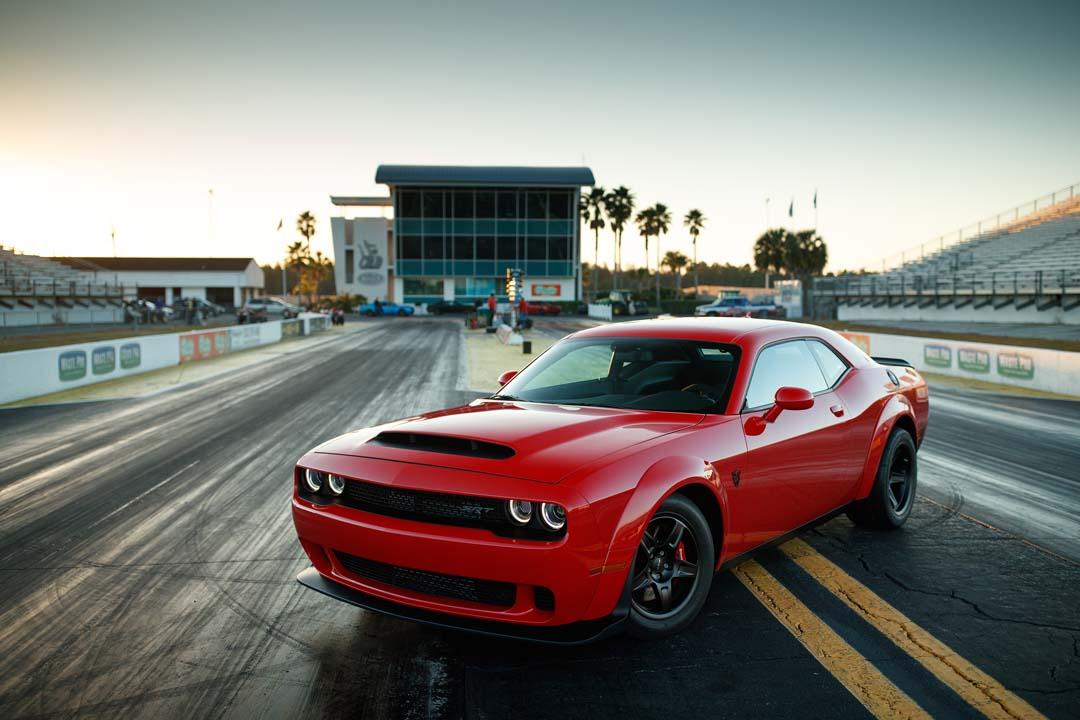 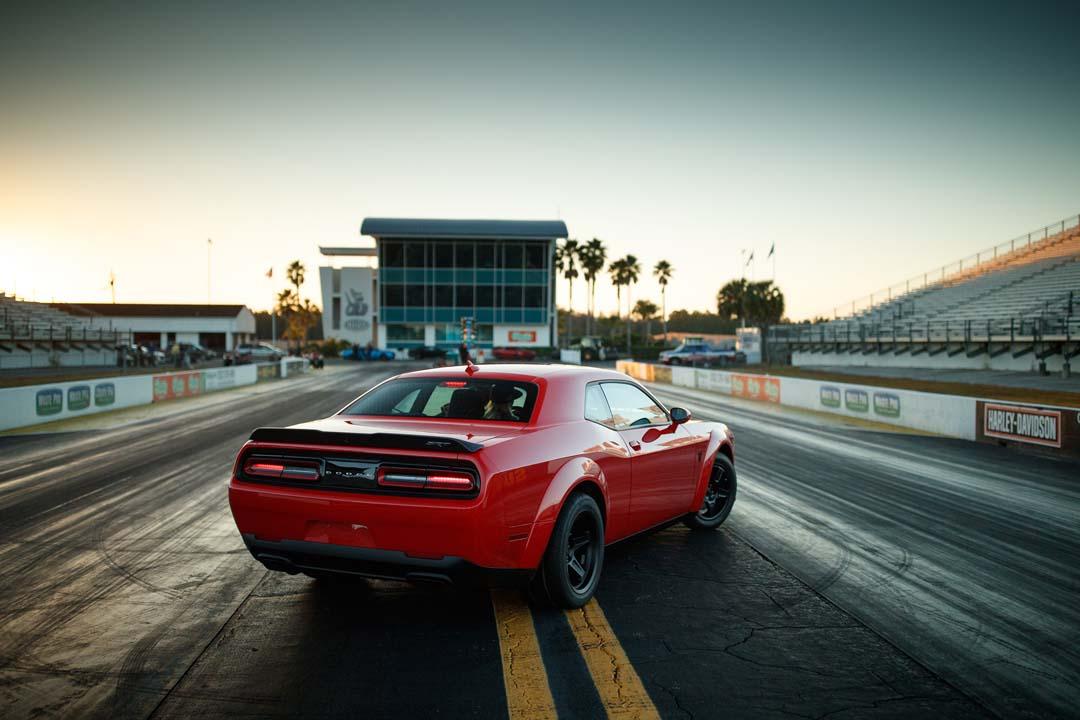 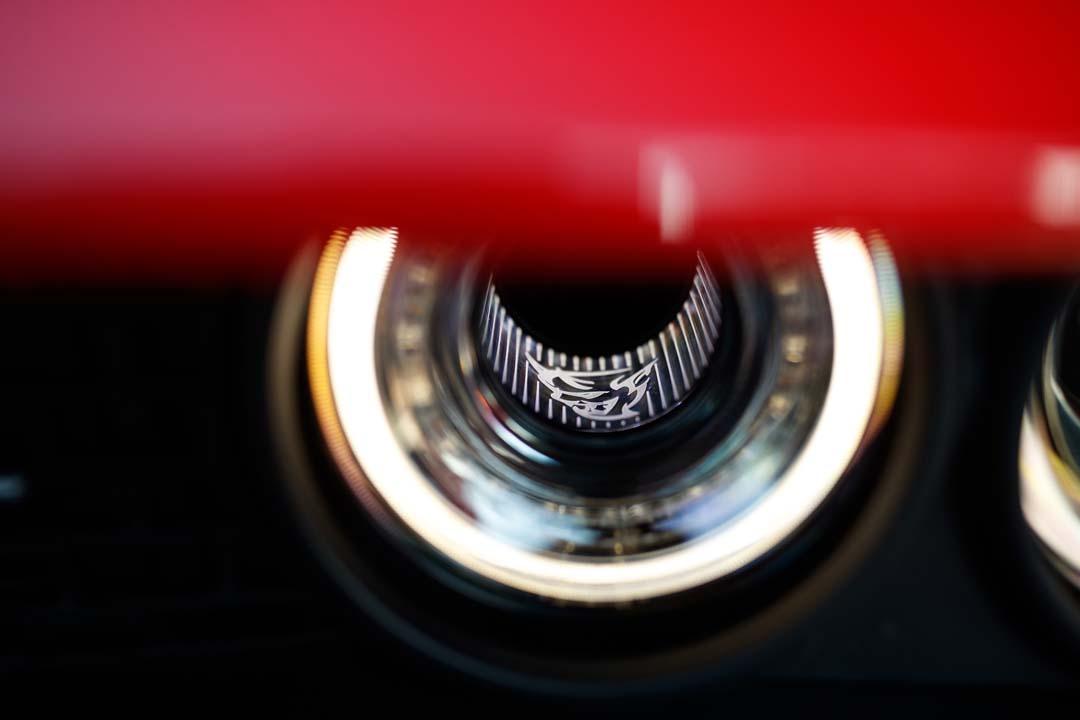 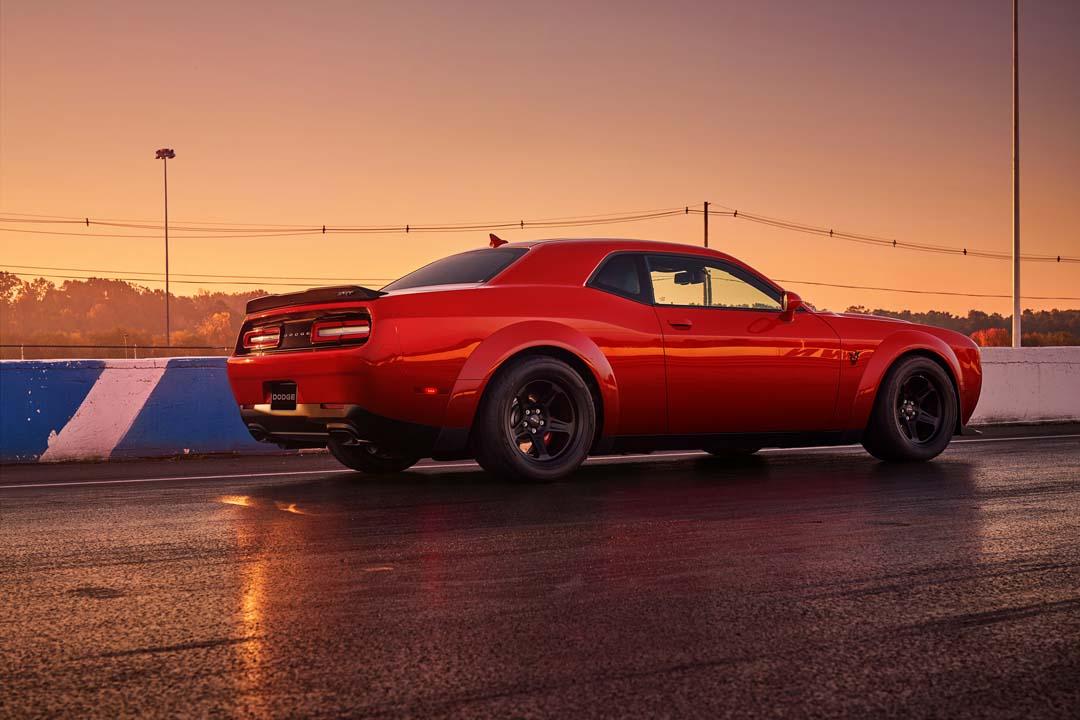 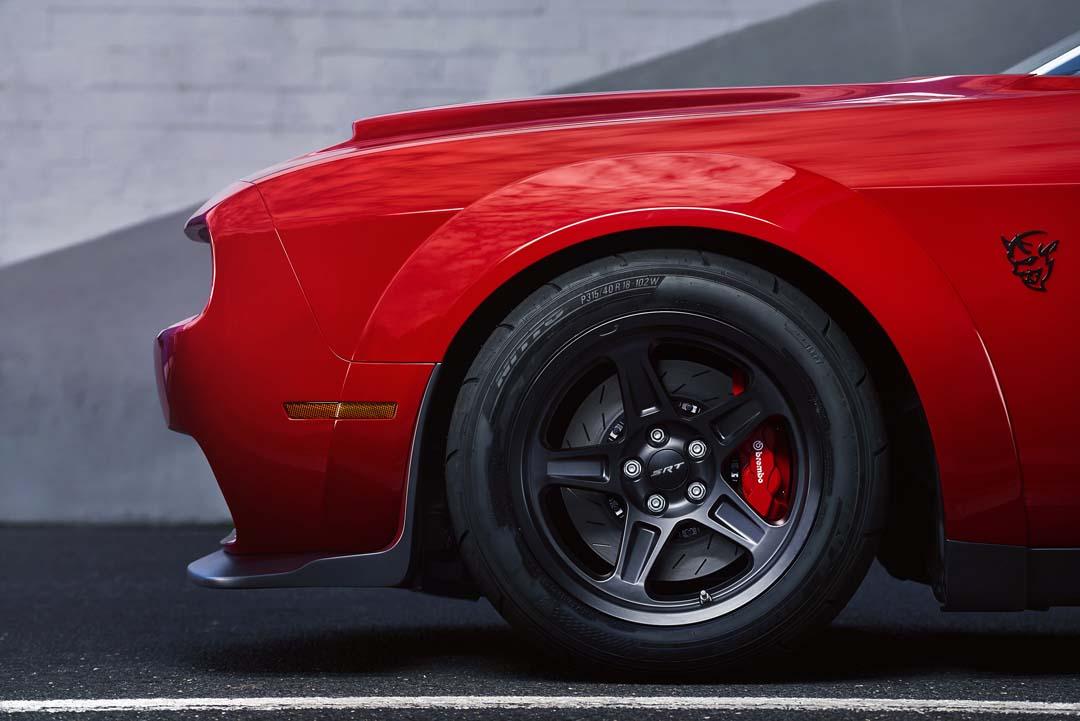 The Challenger’s standard TorqueFlite eight-speed automatic (no manual is offered) has been strengthened for its application to the Demon, including an upgraded torque converter that improves torque multiplication, stall speed and lockup speed. In conjunction with this, the prop shaft, rear diff housing, gears and half shafts have been strengthened to handle the increased torque delivery.

To help achieve faster, smoother starts off the line, the Demon also adds a unique new TransBrake feature, which locks the transmission output shaft, thus reducing brake pressure during staging before a standing start, and also “pre-loads” the driveline with torque, resulting in faster power delivery and a claimed 15 per cent improvement in torque from launch.

Using the inbuilt paddle shifters as a launch trigger, reaction time improvements of 30 per cent are claimed compared to foot-brake launch activation, as well as faster initial torque delivery.

In combination with this, the Torque Reserve system “prefills” the supercharger, while also managing fuel flow and spark retard to deliver a claimed 120 per cent improvement in engine torque and 8psi of boost at launch. A Launch Assist function reduces rear wheel hop, using in-wheel sensors to detect and reduce torque application as required, without the driver having to lift off the throttle.

There’s also a line locker – essentially a burnout mode – that locks the front brakes and allows a rear wheel burnout of up to 400 revolutions.

Also unique to the Demon are street-legal drag-spec Nitto tyres which offer more contact area and double the grip of the rubber used on the Hellcat. A pair of narrower front wheels are also included, specifically for dragstrip use, in the Demon Crate.

In full drag mode, the Challenger SRT Demon weighs more than 90kg less than the Hellcat. The major gains are through the deletion of the rear seat, front passenger seat and sound system (around 62kg combined), with less substantial weight savings made through the utilisation of lighter wheels, brake calipers and suspension components, as well as deletion of items like the parking sensors, sound deadening and boot trimming. But if they wish, Dodge says customers can buy them back all the delete parts, at US$1 per item.

Optional items like heated and ventilated seats, a sunroof, Harman Kardon sound system and heated steering wheel can be added, too, but given these compromise what the Demon’s set up for, it’s hard to imagine they’ll attract many takers.

In terms of appearance, the main differences between the Demon and other Challengers are the wheelarch flares and oversized Air Grabber bonnet scoop. The former look much chunkier than those seen on the AWD Challenger GT released last year, but increase overall vehicle width by only 90mm. Like the Demon name (see breakout), the Air Grabber scoop is also another nod to the muscle car past: this Mopar performance part that first appeared on Plymouth’s Road Runner in 1970.

Demon logos on the front guards are the only other notable exterior addition.

Inside, the driver’s seat is cloth trimmed (all part of the weight saving program), but this – and the other seats, if fitted – can be trimmed in leather.

The driver gets an Alcantara-wrapped SRT Performance steering wheel, SRT gauges (including a 200mph speedometer), TFT display screen and an optional bar to take a four-point racing harness.

Each Demon’s individual build number is attached to a passenger-side dash badge.

A collection of parts to allow the Demon to unleash its full dragstrip potential, the Demon Crate features the aforementioned Power Control Module with its high octane switch button, as well as a conical performance air filter, narrower front drag wheels and a passenger mirror blanking plate. These are all grouped under the Direct Connection Performance Parts label.

Also in the crate is a comprehensive tool kit, which includes an hydraulic floor jack, cordless impact driver, torque wrench, tyre pressure gauge, protective cover for the front guards, tool bag and special foam case that allows the dragstrip-spec wheels and tools to be securely stored in the boot.

Each crate is individualised with the vehicle buyer’s name and the car’s VIN and serial number.

The Dodge Challenger SRT Demon is expected to be a one-year only model (ie. for the 2018 model year), with total build limited to 3,300 units (3,000 for the US, 300 for Canada) and deliveries to begin in the northern hemisphere autumn. Dodge says there are no plans to offer the Demon outside these markets.

Pricing hasn’t been revealed yet, but Dodge says the Demon won’t be significantly more than the Challenger SRT Hellcat (currently the top-priced Challenger variant with a pricetag of just over US$64,000) and will be below six figures. Even if it was over six figures, the entire Demon allocation is sure to be snapped up quickly. 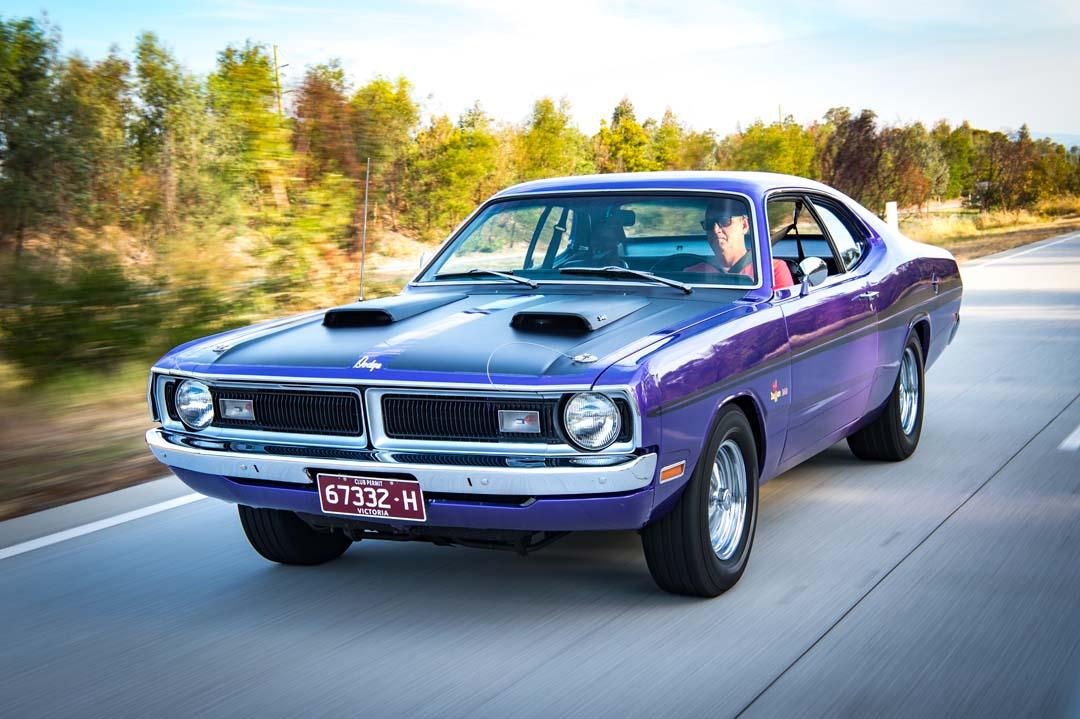 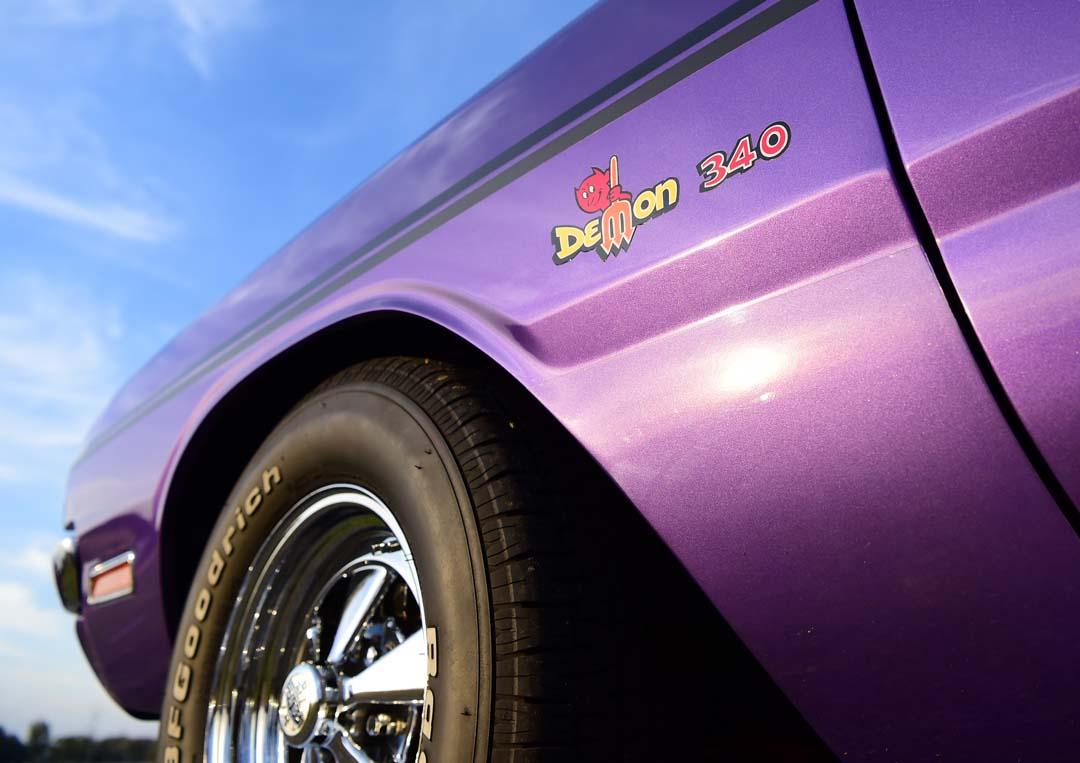 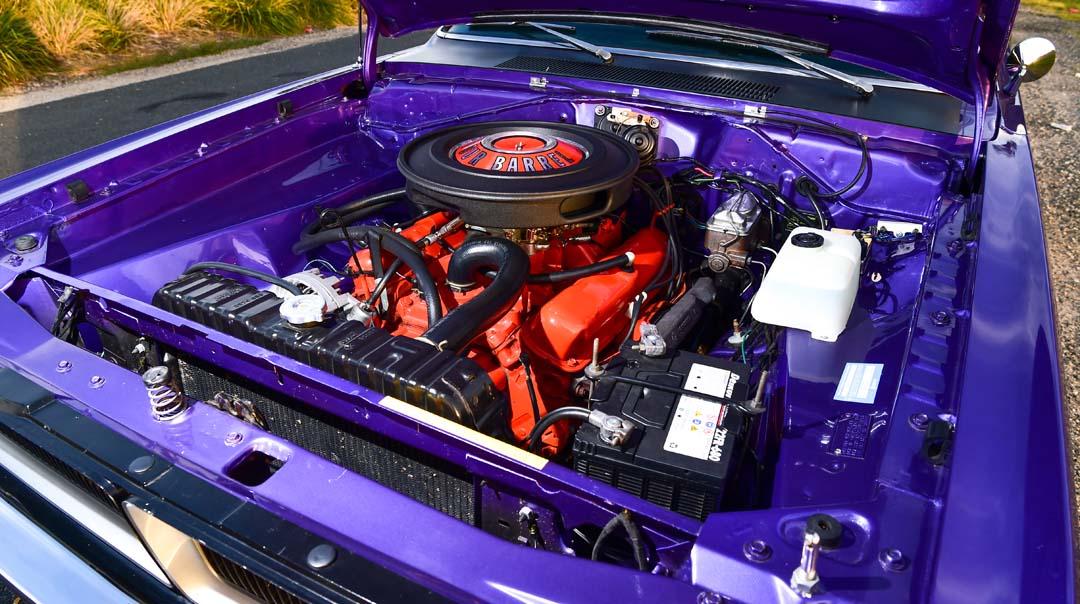 The 2018 Demon takes its name from a Dodge that was released back in 1970, as a 1971 model. A mildly-modified version of Plymouth’s successful Duster compact, the original Demon took the basic Duster body and added their own front clip, tail lights and interior trim. Under the bonnet, a 198ci six-cylinder engine was standard, with V8s as options.

The hottest version for that ’71 debut year was the Demon 340, which paired a 340ci V8 with a 3-speed manual transmission, dual exhaust, heavy duty suspension, wider tyres and other features to create a “mini muscle car”.

Faster over the quarter mile than a 351 Mustang and even Plymouth’s 383-equipped Road Runner, the Demon 340 was also affordable and didn’t – usually – attract the high insurance premiums that were essentially killing the muscle car market in the US at the time.

The ‘Demon’ name attracted the ire of certain religious groups, though, which led Dodge to rebrand the car as the ‘Dart Sport’ from 1973 onwards.

Around 128,000 units of the original, Demon-badged vehicles were built before the name change, and of those, only 18,798 were Demon 340s, so they’re quite rare today. See more on the original Dodge Demon in JUST CARS #251.

In 2007, the Demon name was revived for the first time on a show car with echoes of the Audi TT in its styling, but this 2-seat roadster was never developed beyond the concept stage.