French Flavour. For their 16th National Muster, the Renault 4CV Register turned Inverell into a little corner of France. 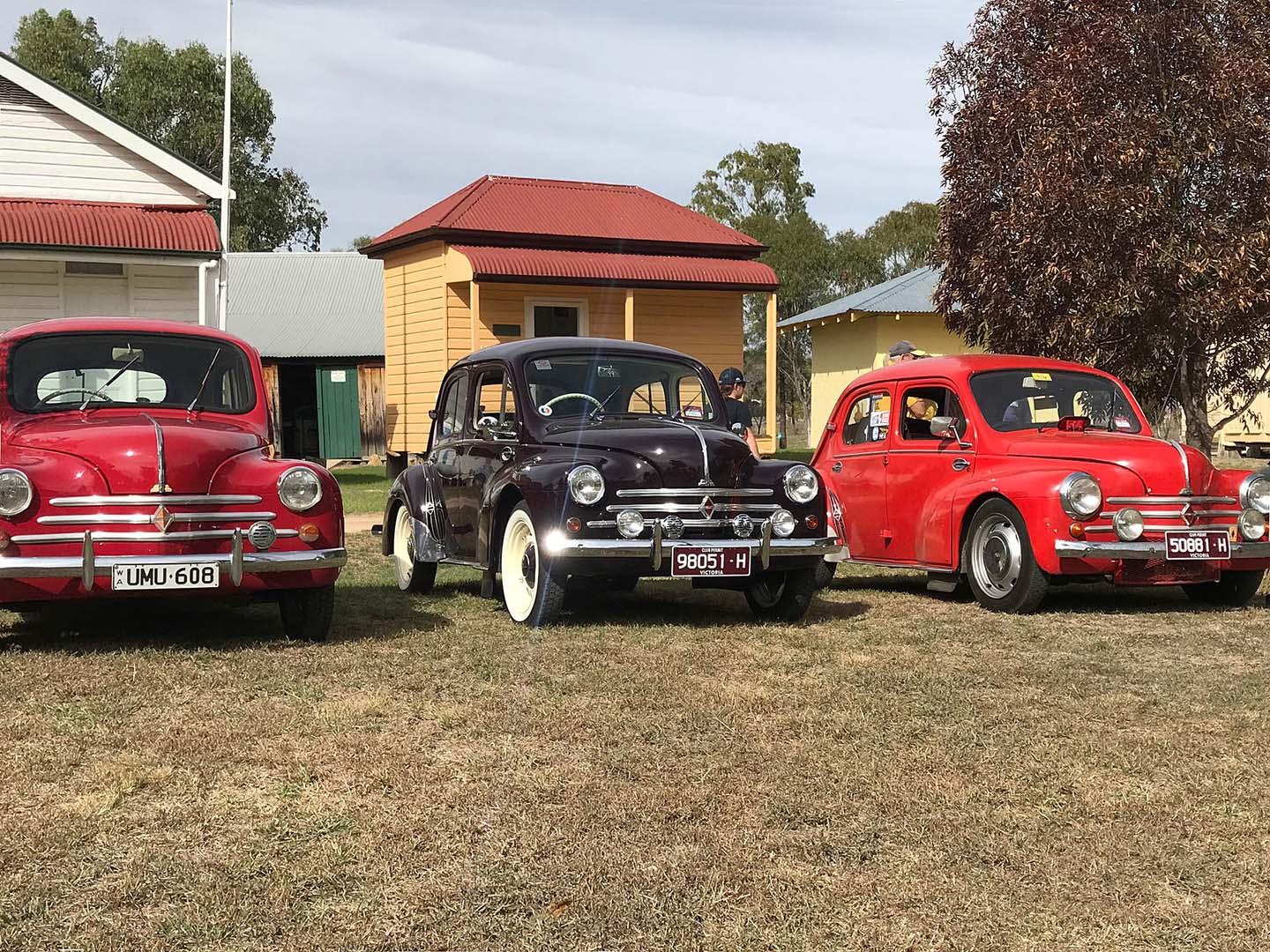 For a club as specific as the Renault 4CV Register, their following is both impressive and extensive. There are around 100 members spread throughout the country and, when the Register held their 16th ‘National Muster’ this past Easter, almost every state and territory in Australia was represented.

It’s fair to say the 4CV doesn’t enjoy the recognition of Citroen’s 2CV, even though it arrived on the market a year earlier and was arguably a better vehicle.

Developed in secret under the German occupation of France during World War II, the 4CV shared a number of general similarities with VW’s Volkswagen, including the rear-mounted engine, but Renault bosses of the time vehemently denied any influence of the Beetle in the French design.

When it hit the market in 1947, the 4CV was something of a departure from Renault’s previous mid-sized and mid-priced offerings, being both compact and affordable. For its size, the 4CV was relatively powerful, too. While the liquid-cooled 760cc four-cylinder engine produced only 17hp (12.6kW), that was almost double the 9hp (7.7kW) output from the first, 325cc-engined versions of Citroen’s 2CV.

The combination of price, performance and reliability made the 4CV an instant hit, leading to sales throughout Europe and in numerous overseas countries, including Australia, where it was known as the Renault 750. First imported in fully-assembled form in 1949, then as CKD kits for local assembly from 1951, the 4CV remained one of the cheapest new cars you could buy here throughout the 1950s, but by the end of the decade, our tastes, incomes and expectations had changed.

Those changes had already been felt overseas, where the Dauphine had arrived in 1956 as the 4CV’s replacement, but the popularity of the little four door saw Renault keep it in production until 1961, while Australian sales continued until 1963. 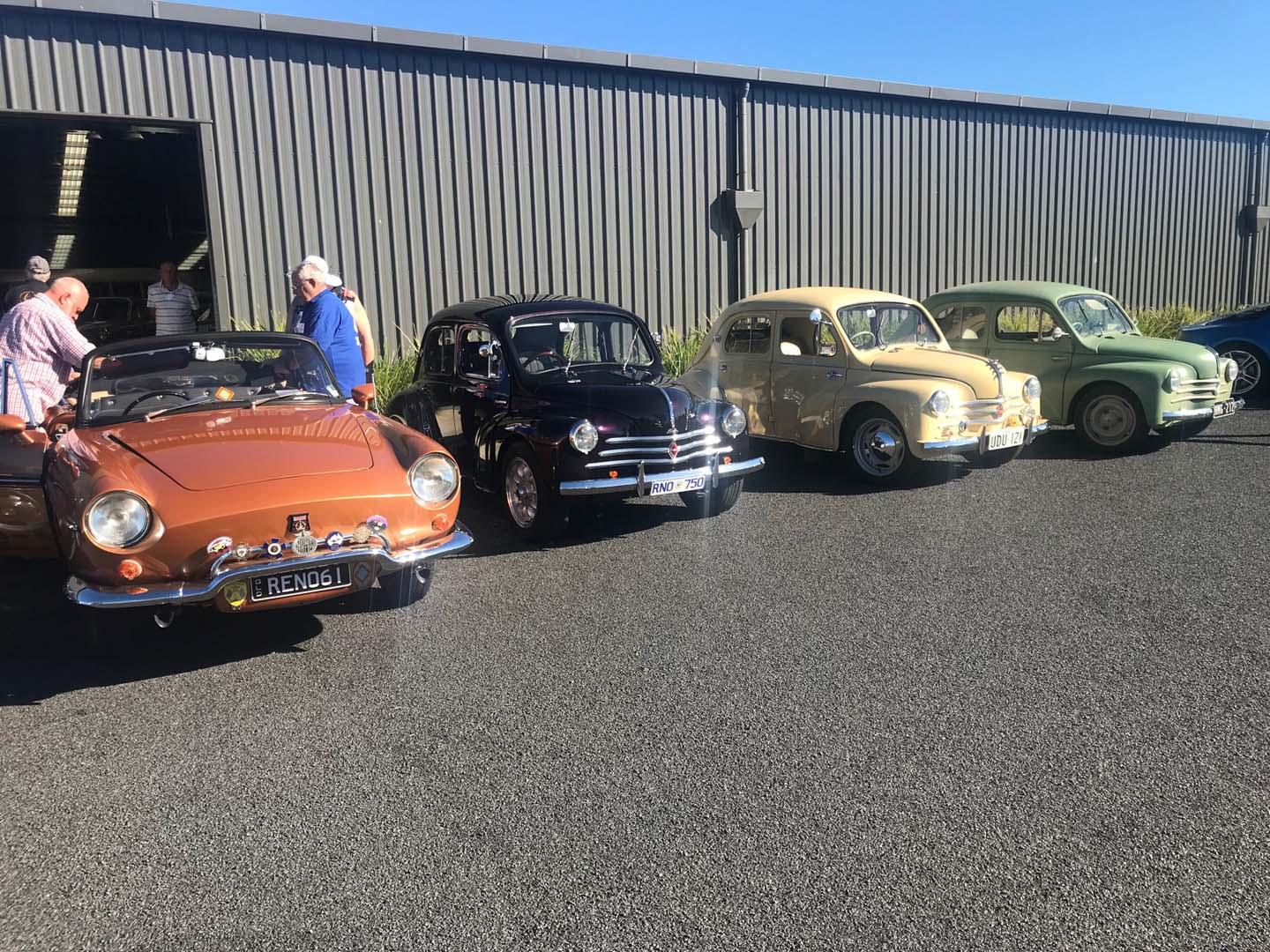 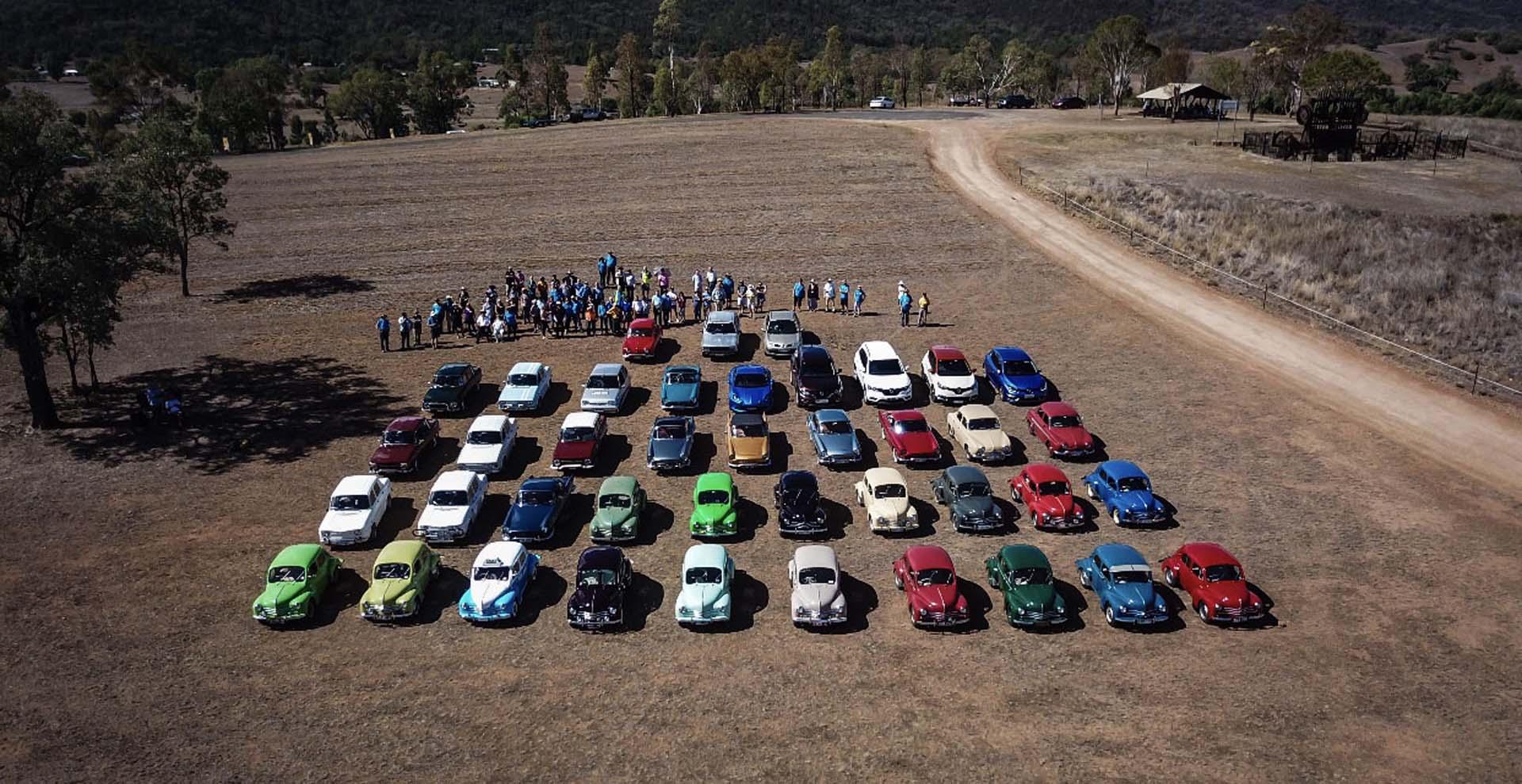 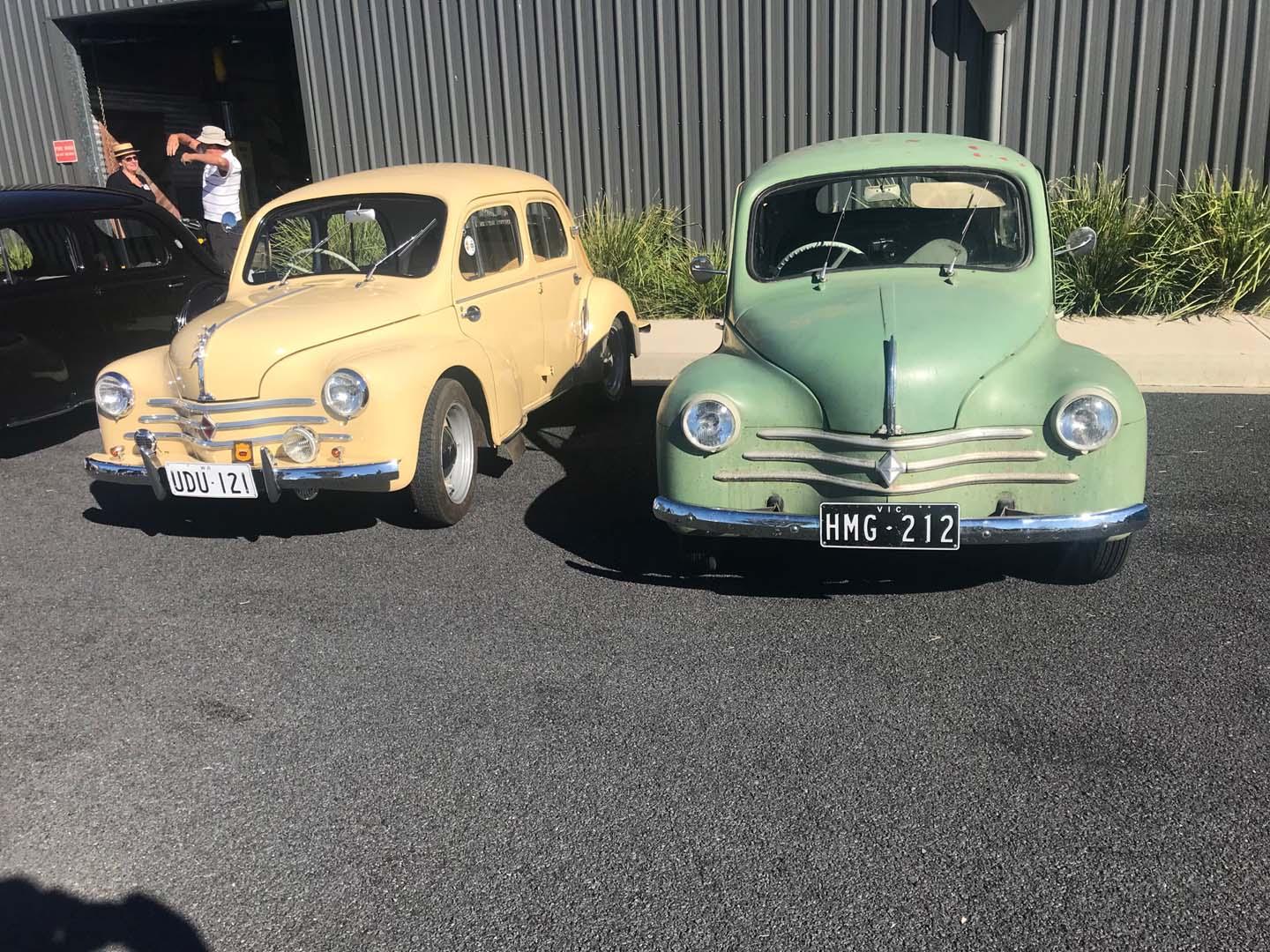 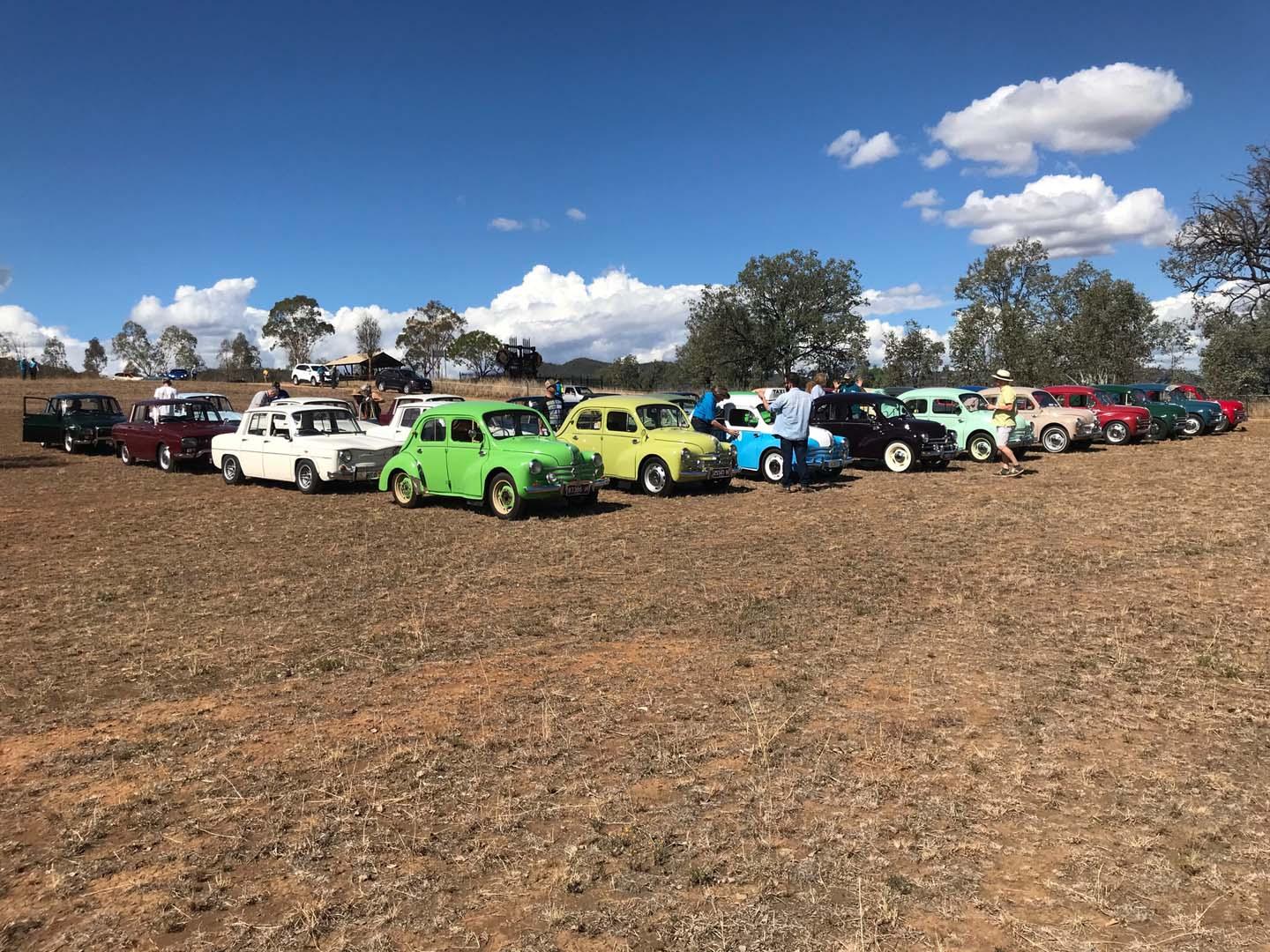 When the Renault 4CV Register was formed in 1987, the 4CV was just a 30-year-old car and certainly not regarded as a classic or collectable – at least by non-4CV owners!

The group of enthusiasts that formed the Register back then decided to hold their first ‘National Muster’ in 1989, over the Easter long weekend in Canberra. Founding member George Cook put an advert promoting the muster in several New South Wales newspapers, with no idea how many cars would actually turn up.

To his surprise, a total of nine 4CVs made their way to Canberra: not big numbers, but big enough to ensure the muster would continue, hosted by the Renault 4CV Register and held every second year. After that Canberra debut, subsequent musters were held in Tamworth, Swan Hill, Glenn Innes, Corowa and Parkes, to name a few, with the most recent gatherings held in Forbes (2015) and Griffith (2017).

You’ll notice that virtually all the musters to date have been in country towns. The Register prefers these quieter rural areas, as they’re generally more relaxed places to drive and explore than big cities and also suit the pace and performance of the 4CV better. 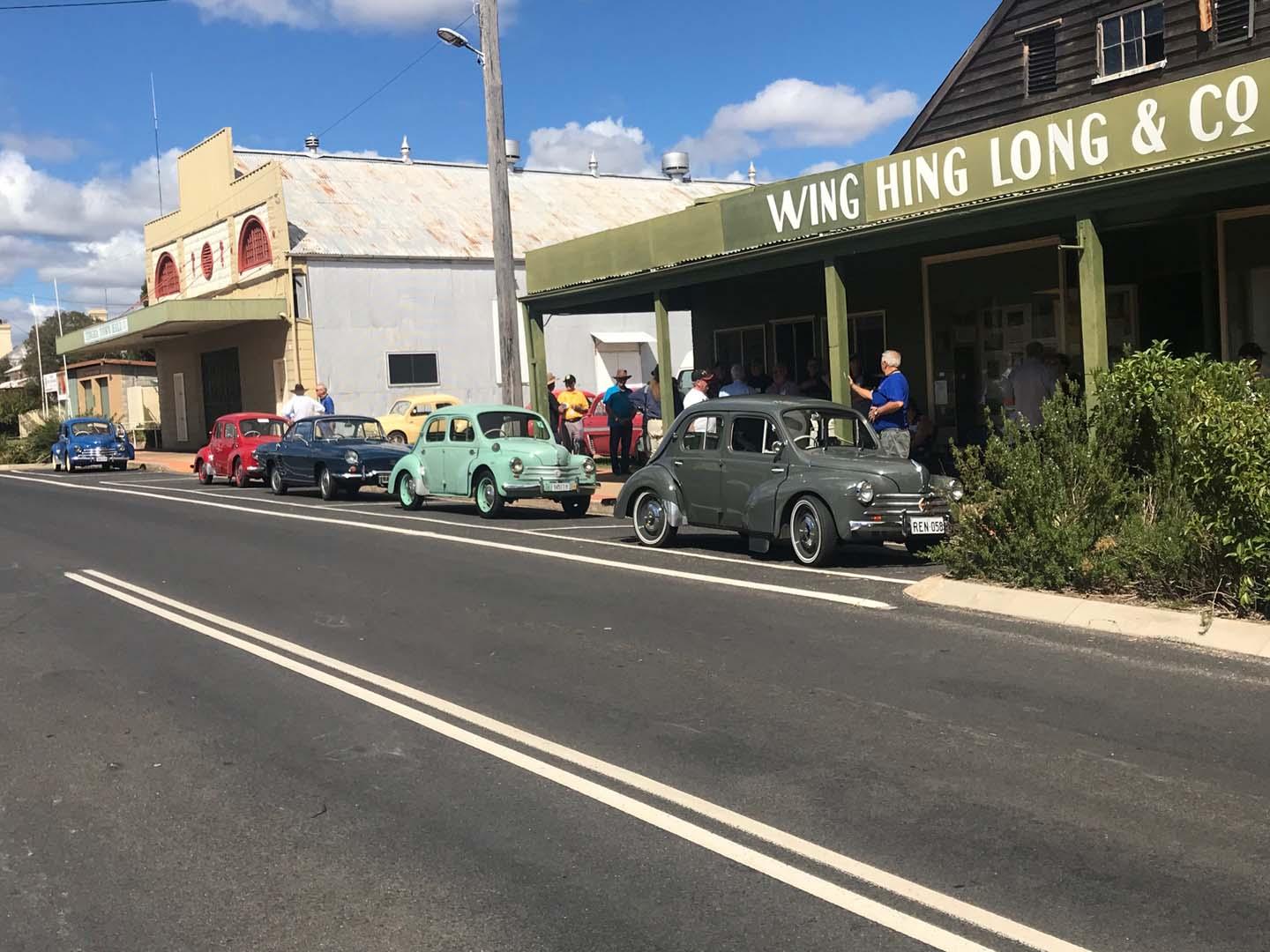 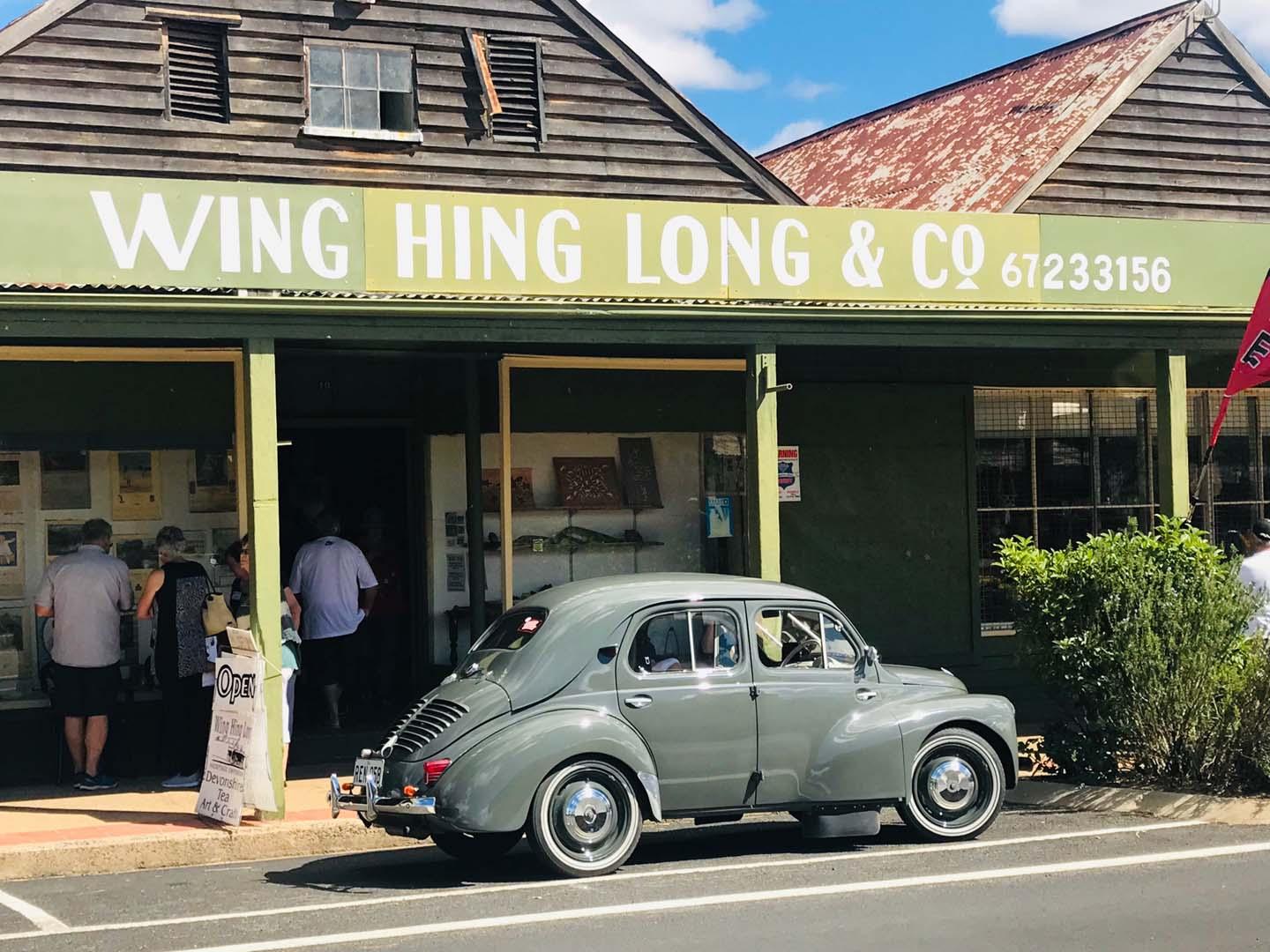 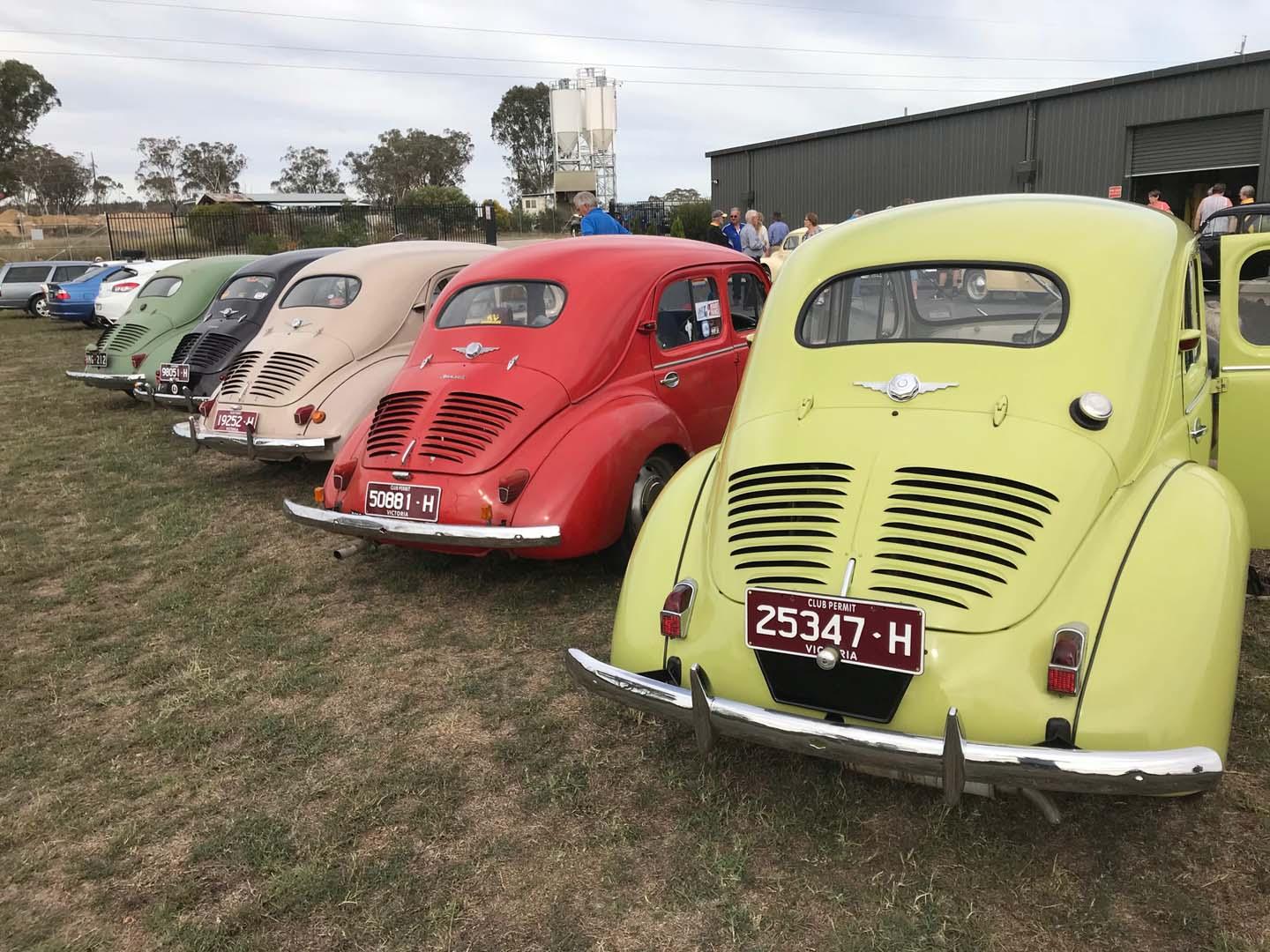 This year’s 16th National Muster for the Renault 4CV Register was held in the inland New South Wales town of Inverell (around 60km south of the Queensland border) over the Easter break.

Cars from Victoria, South Australia, New South Wales, the ACT, Tasmania, Queensland and even two cars from Western Australia made their way to the muster. In total, 44 rear-engined Renaults took part, including 23 4CVs. The Register welcomes related cars to the Muster, too, which this year saw three Dauphines, eight Florides and Caravelles, five R10s and two R8s join the party.

The all-French fleet visited the towns of Bingara, Glenn Innes, Tingha and Delungra as part of the long-weekend event, with activities including a visit to Tingha’s Wing Hing Long & Co. store – a general store in operation since the tin mining days and recently turned into a museum. Visits to John and Josie Ellie’s Petrol Pump Museum and the Australian Standing Stones in Glenn Innes were also part of the itinerary, as well as the Myall Creek massacre memorial, where participants were welcomed with a smoking ceremony and guided tour of the Myall Creek massacre that took place in 1838.

In Bingara, the ‘hill stamper battery’ (for smashing rocks to extract gold) from the former All Nations gold mine and a visit to the ‘living classroom’ outside the town were other highlights, while a visit to New England Woodturning in Gilgai offered something different before the Muster wrapped up at the National Transport Museum in Inverell.

The next Renault 4CV Register National Muster will be held in 2021 in Yass, NSW.

The Renault 4CV Register welcomes new members, so if you have a 4CV and would like to share your enjoyment of these cars with like-minded people, go to: 4cvregisteraustralia.org or the Register’s Facebook page. 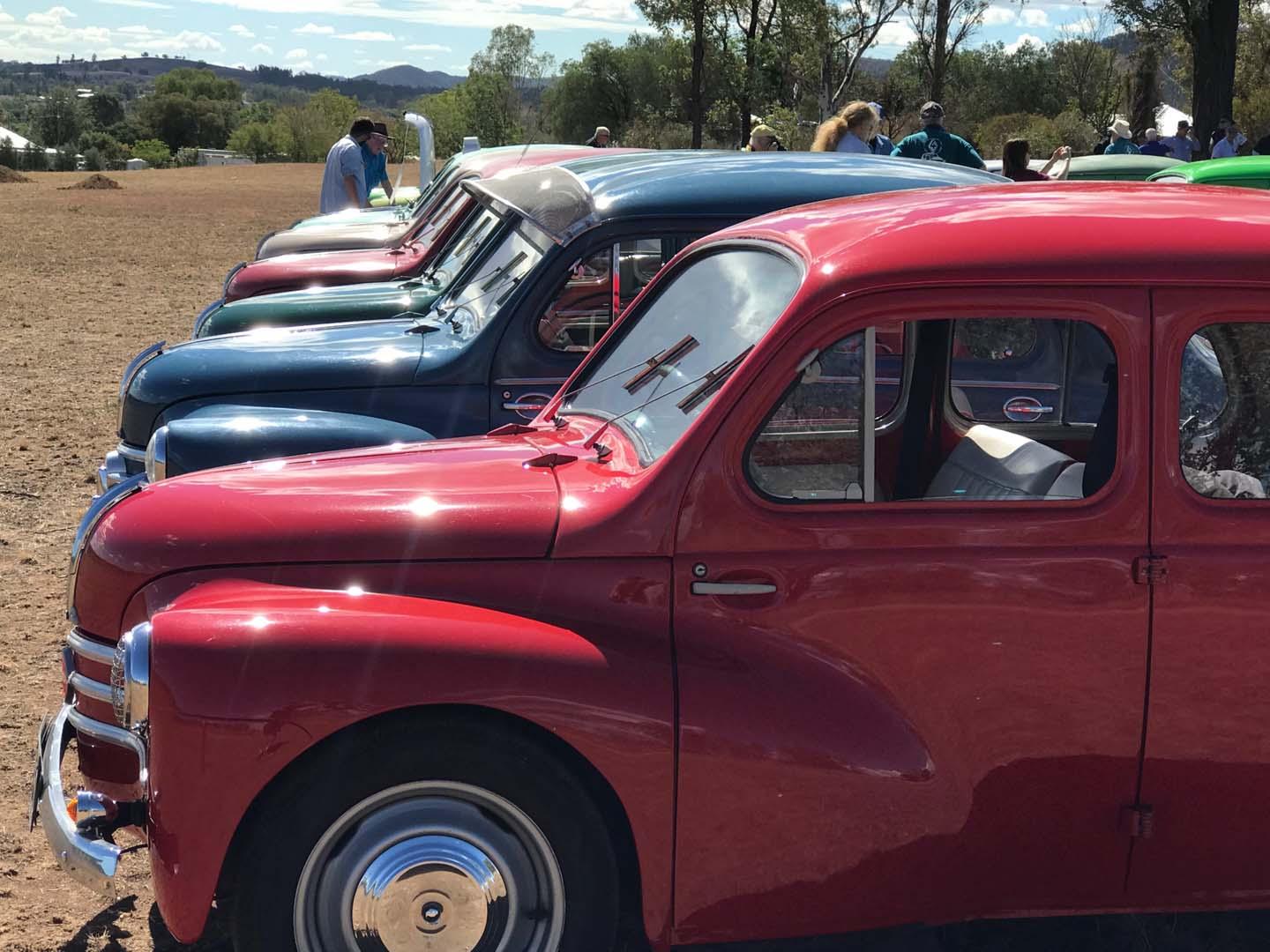 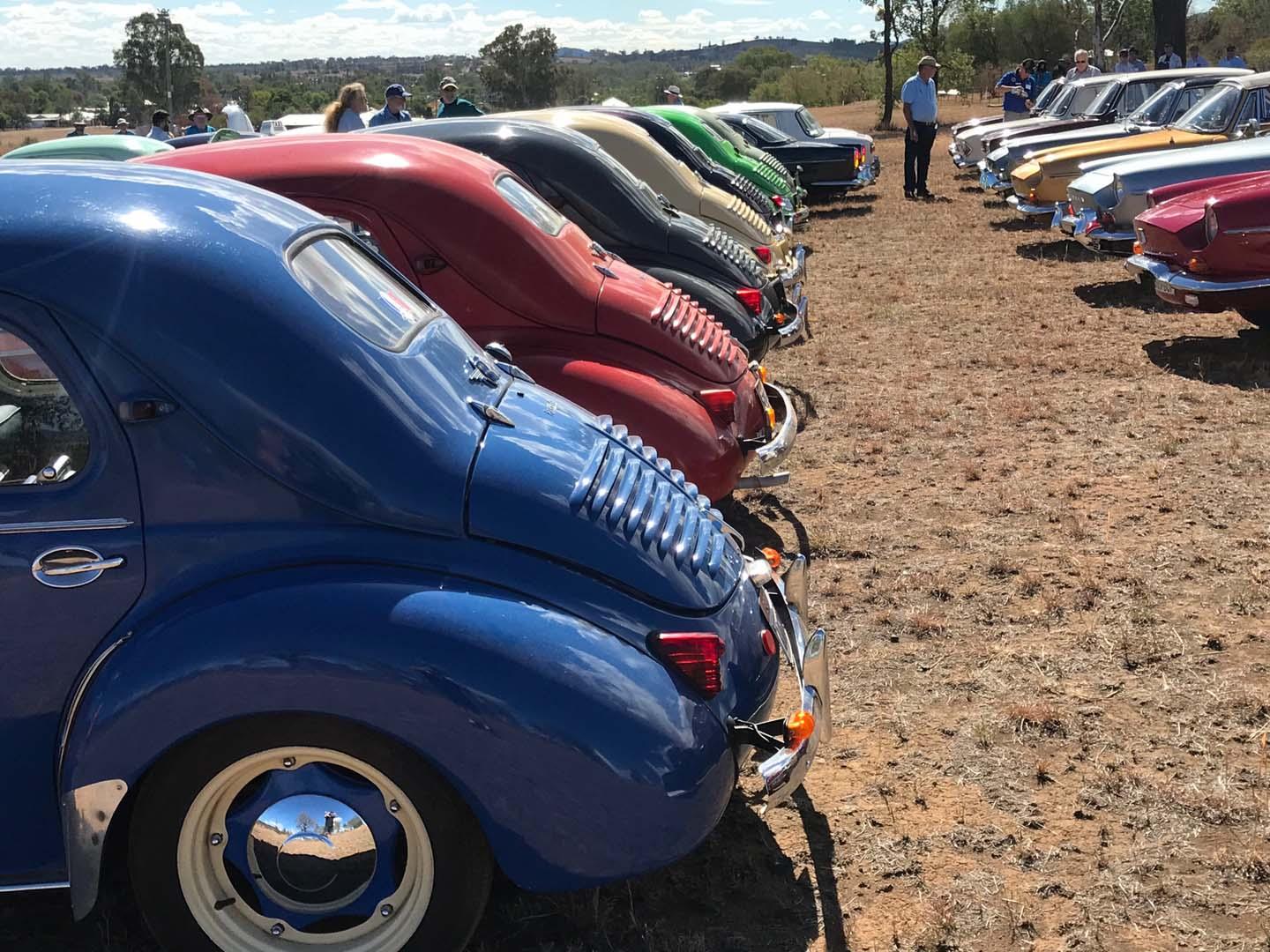 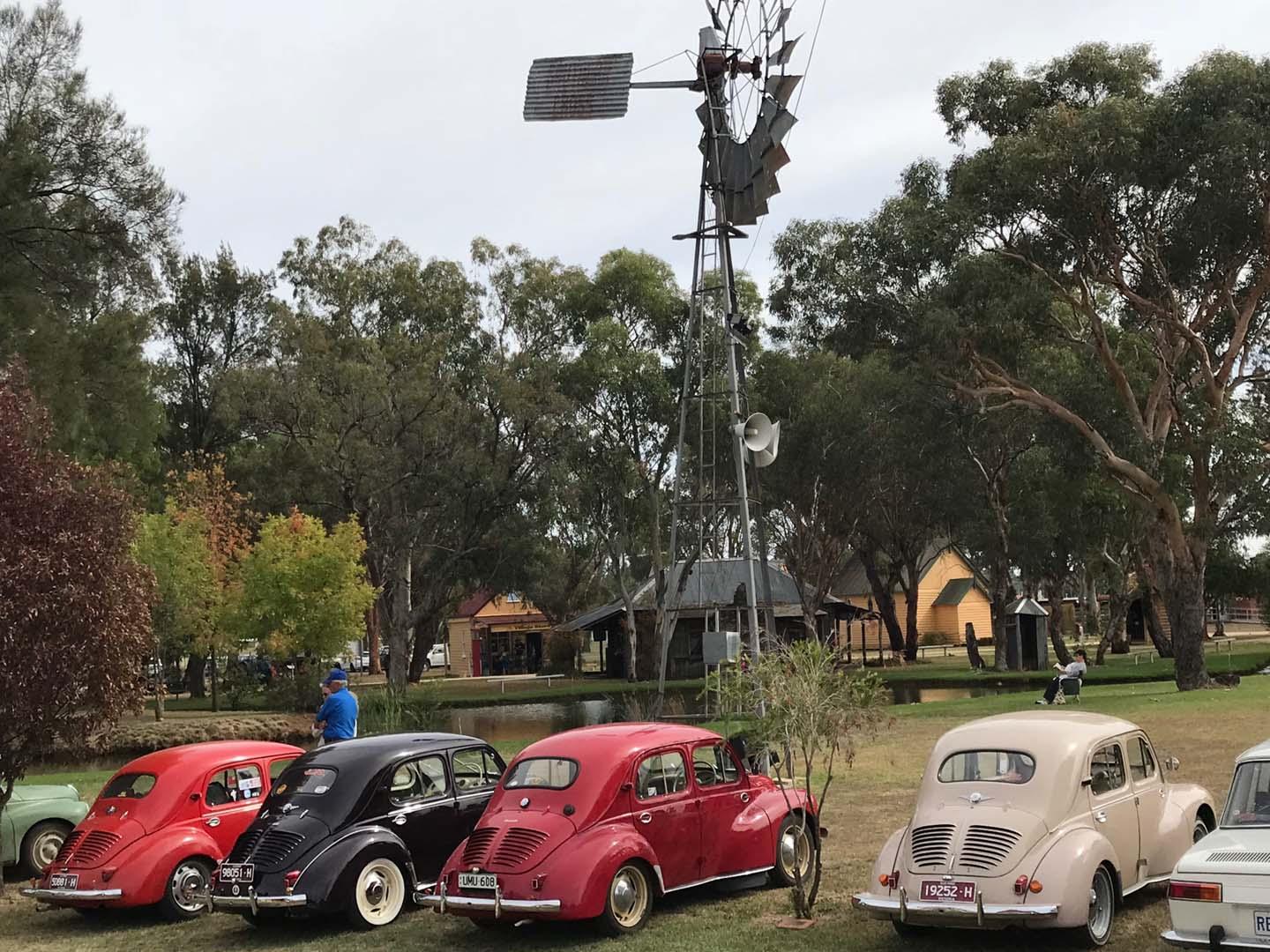